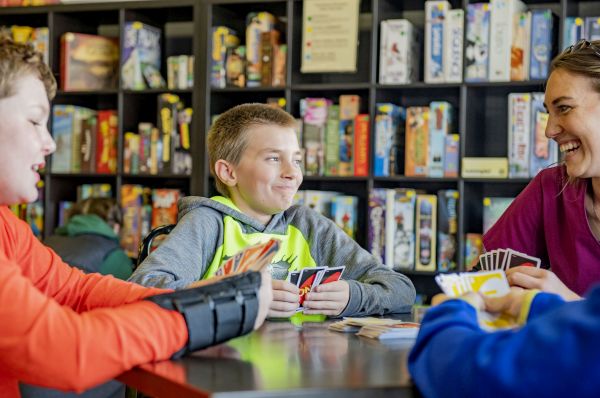 Like most kids, Scott Copeland grew up playing board games with his family. They played some of the more famous games such as Payday, Password and Scrabble, along with Scattegories around the holidays inside their Neosho home. The family memories stuck in Scott’s mind and now he’s transformed a rekindled interest in board games into a memorable business venture.

Scott and his wife, Thuy, opened Maryville Board Game Cafe in downtown Maryville more than one year ago. The fun, open cafe features hundreds of board games for all ages, delicious coffee, specialty drinks, bakery items and an endless amount of smiles.

The Copelands attended Northwest Missouri State University, located just down the road from the cafe. Thuy graduated with a degree in Interactive Digital Media 15 years ago and jobs were more plentiful in the Kansas City area. However, the city didn’t have the same small-town atmosphere of the Nodaway County seat.

“We lived down in the city for about 10 years, but that never really was home,” Scott explains. “Maryville felt more like home. There’s such a neat demographic here with all the college students. Maryville has a lot of amenities you wouldn’t normally have in a small town.”

While living in the city, the Copelands developed a board game hobby. They started a family, Thuy gained the ability to work remotely and the plant where Scott was working was shuttered. A move back north was in order.

“We had a few different ideas of how we could open our own business,” he says. “But we always kind of found ways to poke holes in them and say, ‘that won’t work.’ ”

The couple worked with Nodaway County Economic Development Corp. and the university on feasibility studies and surveys for a viable business. Board game-themed cafes and bars are a growing trend across the country, but are normally found in towns larger than Maryville. They settled on the location at the corner of Fourth and Main streets — one of the busiest intersections in town — and started rehabbing the building in June 2017. The cafe had a soft opening on Black Friday that year with far fewer games and just Jones Soda for sale. They opened in earnest two months later.

The board game collection at the cafe now stands at more than 400. The fi rst 100 in the library were from the Copeland’s personal collection. Scott procured the rest using the surveys he got before opening and scouring Top 10 lists and award-winning games. They also accept donations.

Scott says board games have been growing in popularity as of late, especially with college-aged kids.

“We’re seeing generations of kids who have lived their entire lives plugged in,” Scott says mimicking texting. “They don’t know life without it. So they’re looking for something different. They’re used to connecting in the digital world. Now they’re looking to connect in the real world.” 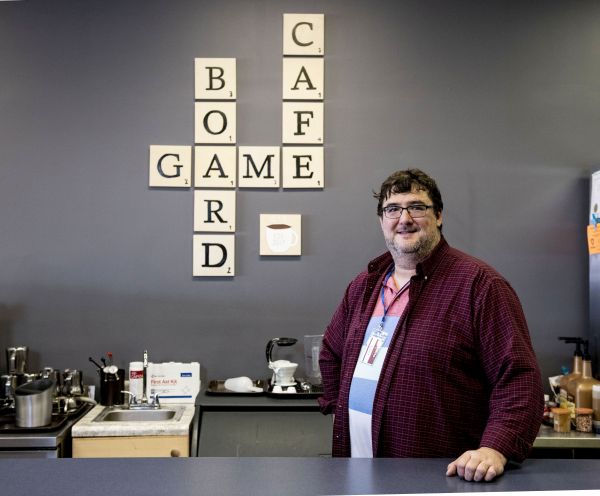 Scott Copeland has served up coffee and laughs at Maryville Board Game Cafe for more than a year.

Board game mechanics have evolved to meet the demand of a new generation according to Scott. Gone are the days when your opponent is hotel rich and you’re awaiting your ultimate Monopoly demise.

“The newer games have a lot of different ways to win and the game isn’t over until it’s over,” Scott says. “Every player stays vested throughout. Either something triggers in game and there’s a mad dash to try and win or there’s something that allows anyone to win at any point.” Of the hundreds of games, the current most popular is Taco Cat Goat Cheese Pizza. The fast-paced game is a variation of Slapjack using cards featuring colorful artwork. Special cards require players to thump their chests like gorillas or pound the table impersonating a groundhog before slapping the center card.

The game got to the cafe almost by happenstance and has become a hit at the college. The developer of the game — a small business in Ohio — ran a Kickstarter to raise money. After exceeding their goal, they sent the game out to various board game businesses. “I got this package out of the blue with Taco Cat Goat Cheese Pizza,” Scott says. “We thought it was fun so we shared it with our customers. They fell in love with it. That original deck got destroyed.”

He purchased more copies of the game and sold it to students to play on campus. Helping other small businesses is important to Scott. His line of coffee and signature drinks come from a one-man shop in the Kansas City area, Maps Coffee Roasters. When he decided to add bakery items, Scott turned to Ali’s Bakery in Maryville. “We’re all part of the same community,” he says.

An all-day library pass — which includes access to the entire game collection — costs $5. There’s a section of the library devoted to games just for kids and families as well. Scott says families will come in on Friday evenings to play different games each time. Attracting college students and maintaining a familyfriendly cafe is key for the Copelands.

“The college kids aren’t here four months out of the year,” he says. “We have a family and I wanted to have a business that I would be proud to take them to.”

For more information on the Maryville Board Game Cafe, visit www.maryvilleboardgamecafe.com or call 660-241-5017.