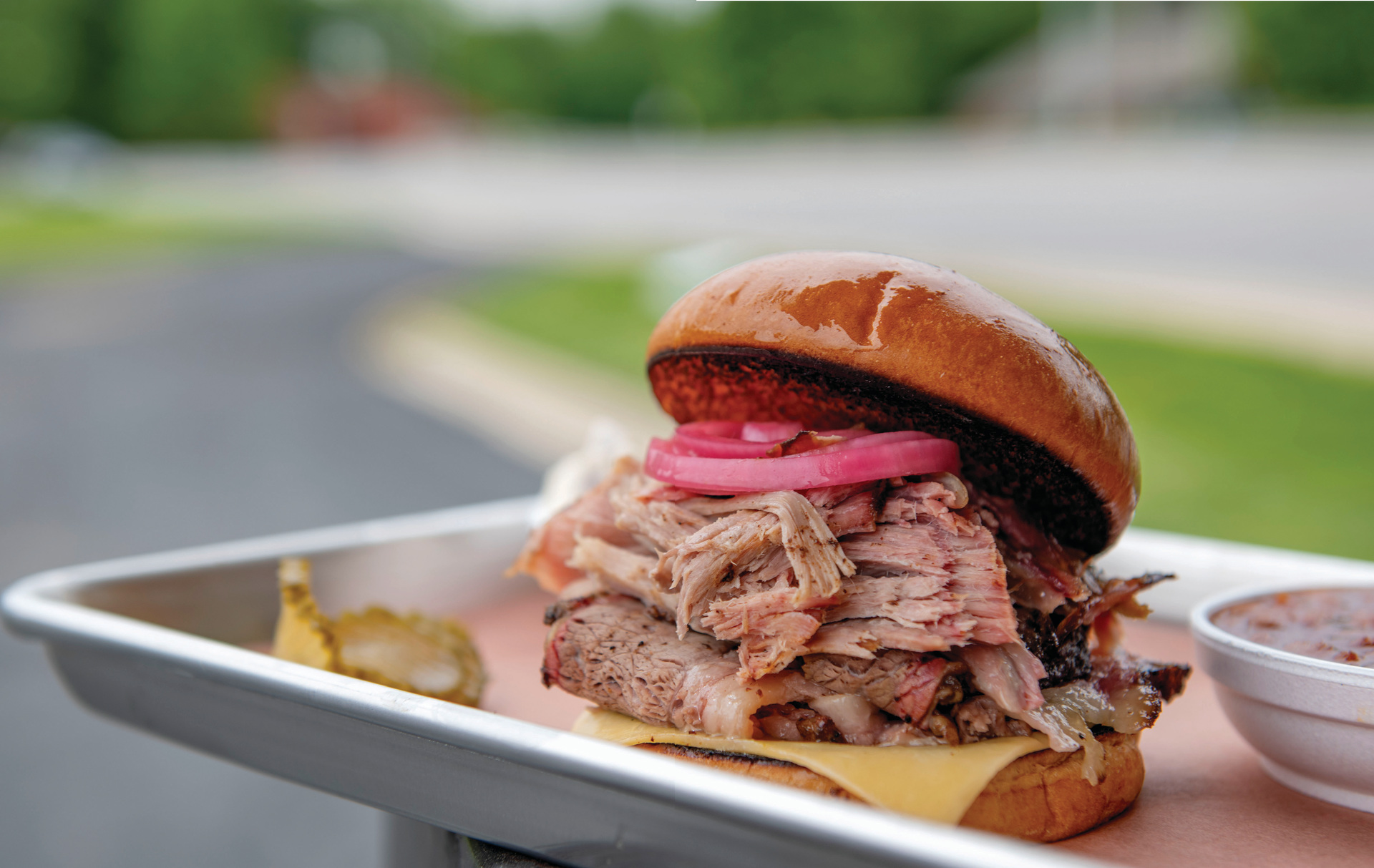 Jaret Jensen was excited to dip his toes into the world of delicious barbecue. Living in west-central Missouri, he and his then-girlfriend, Janna, were no strangers to smoked meats. So when he felt it was time to invest in his first smoker, Janna thought another investment was in order.

“I told him he couldn’t buy a smoker until he put a ring on my finger,” she says with a laugh.

“It’s true,” Jaret responds. “I actually bought the ring and the next day I bought the smoker and hid it in my friends’ garage until I proposed.”

Now wed, the Jensens have upgraded from that original small Green Mountain pellet smoker and in November 2017, they literally took their barbecue prowess to the streets. The couple opened The Jiggy Pig, a mobile food-truck style kitchen that serves up delicious smoked meats with innovative twists alongside numerous homemade sides all just a few feet behind wherever their pickup truck is parked in and around Cass County.

Jaret was looking for a career change and wasn’t sure what direction to turn. While he didn’t have any previous job history in restaurants, food trucks or hospitality, he knew the reaction his barbecue got starting with the first pork butts he ever smoked during a Memorial Day party about six years ago.

The lower barrier to entry of a mobile kitchen pushed the Jensens away from a traditional brick-and-mortar restaurant. They drew up a business plan, acquired the needed equipment and were off.

“The lower overhead of the food truck is a plus,” Jaret says. “But, what’s really nice is that we get to travel to where people are. We’re not just stuck where they have to come to us, we go to them.”

The Jiggy Pig has no problem finding customers. Jaret says that starts with the raw products they buy and ends with them always selling out. “What we really focus on is a craft-style barbecue,” he says. “We use higher-end meats, prime Angus brisket and higher-quality pork belly and butts. We smoke everything that day; it’s always fresh. We don’t reuse our meat.”

While their menu isn’t sprawling — it certainly matches their 135-square-foot kitchen — it more than makes up in flavor. The menu features a few staples that are available most every time the truck is parked and other specials depending on what is available.

Barbecue sandwiches are a mainstay in Missouri, but The Jiggy Pig serves them with a twist. The Red Eyed Bull is their take on a brisket sandwich. The meat features a coffee rub and is served with a homemade bacon-onion jam. The Pancho & Lefty utilizes Jaret’s oak- and pecan-smoked pulled pork and brisket and is served on a brioche bun with house-pickled onions. “It’s really the best of both worlds with pork and brisket,” Janna says.

The most popular and signature sandwich is also their namesake. To start the Jiggy Pig sandwich, thick-cut bacon is coated with brown sugar and a house rub and cooked until it is nice and crisp. They call this their Pig Candy. When a Jiggy Pig is ordered, a split pretzel bun is warmed on the grill before being topped with a plentiful pile of pulled pork and a slice of pig candy.

“It tastes like pork perfection,” Jaret says. “The smoky pulled pork and the sweetness of the pig candy along with the pretzel bun really all adds to it.”

Jaret’s coleslaw — which includes both mayonnaise and vinegar — is featured in another menu staple. A base of The Jiggy Pig’s barbecue beans and pulled pork is topped off with coleslaw to create their BBQ Sundae.

One of Janna’s new favorite items — Oink and Grits — is helping introduce the area to Jaret’s white Cheddar grits. “I think a lot of people might have gotten used to having bland grits that are mass produced for chain restaurants,” Jaret says. 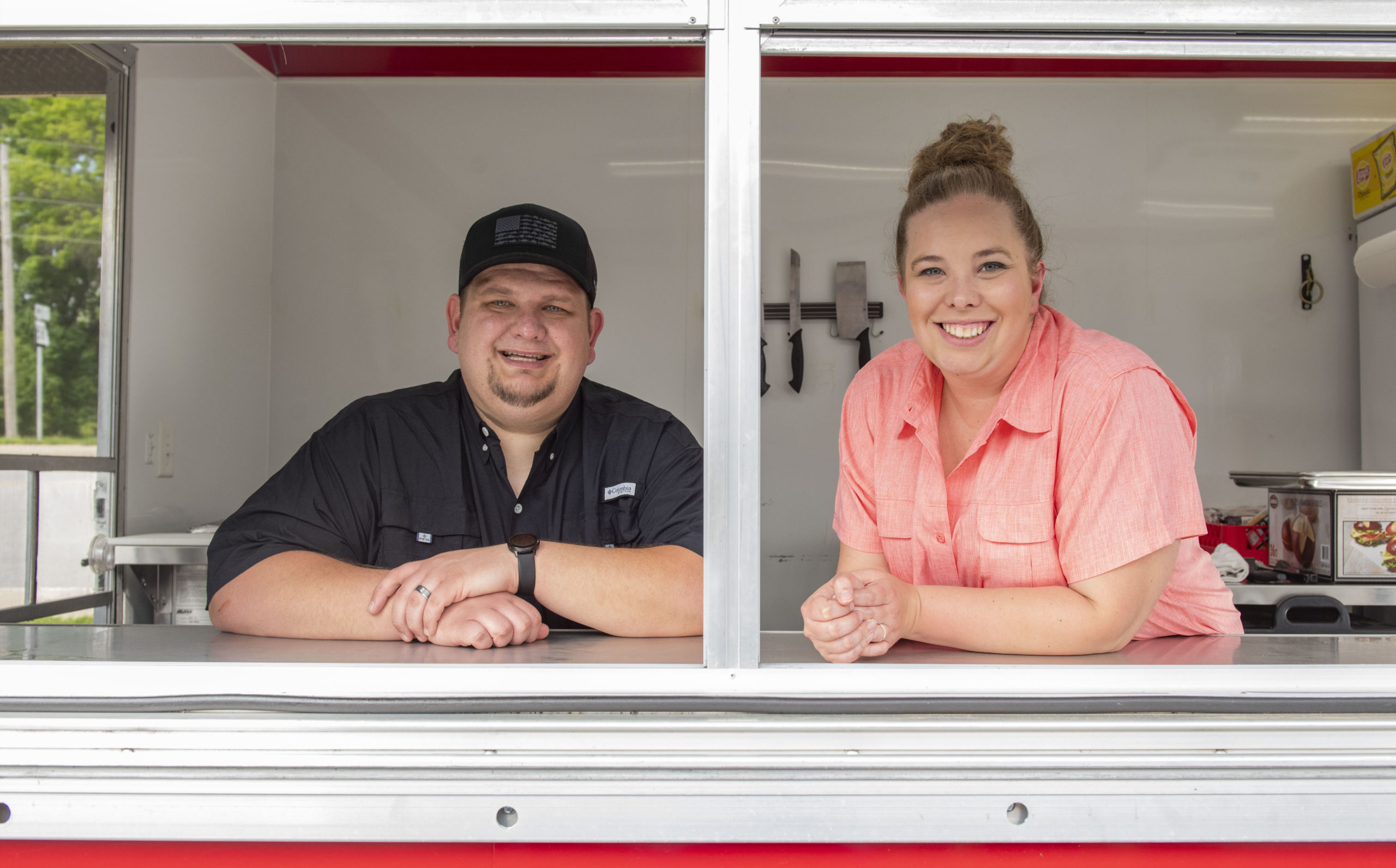 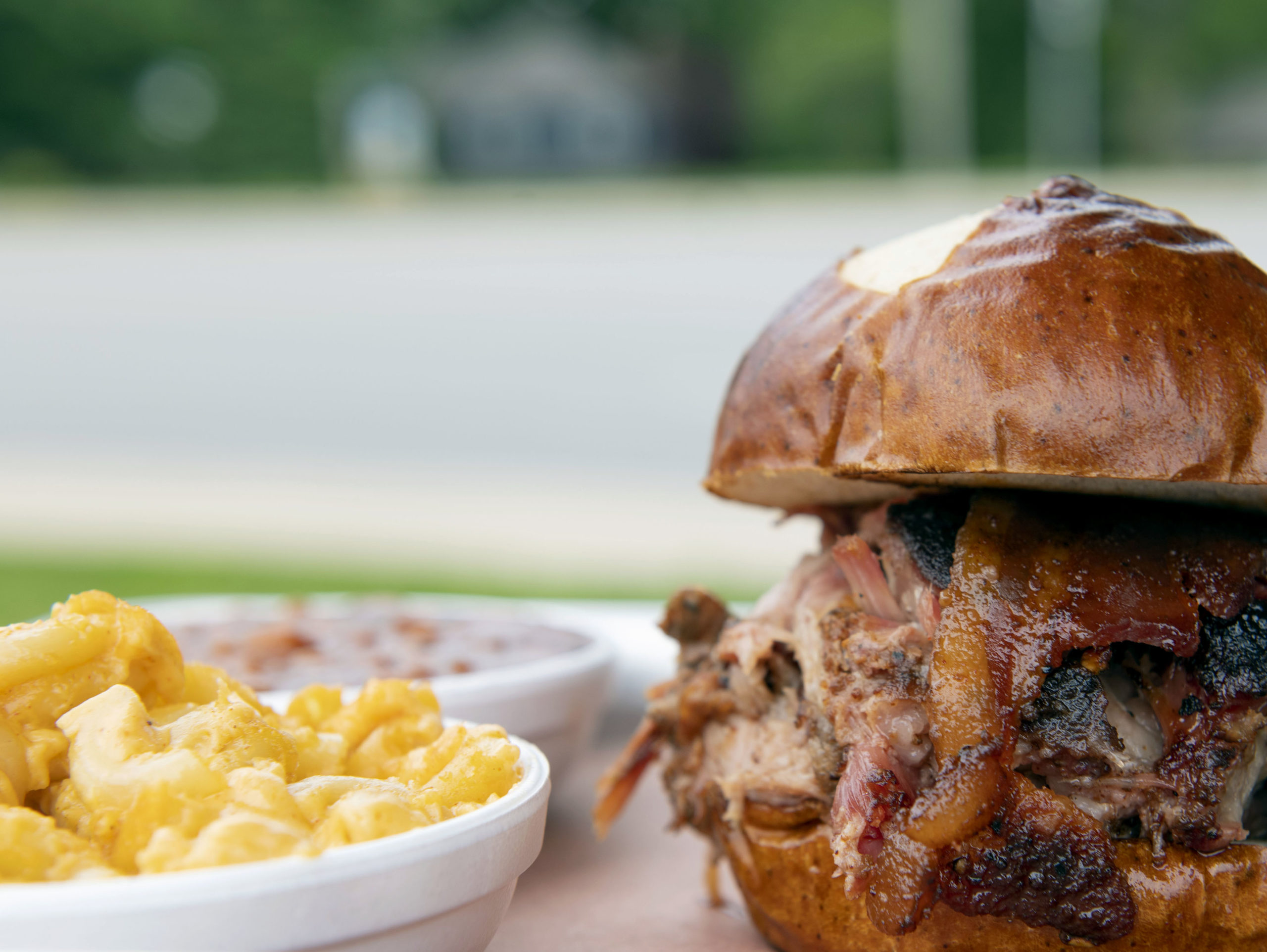 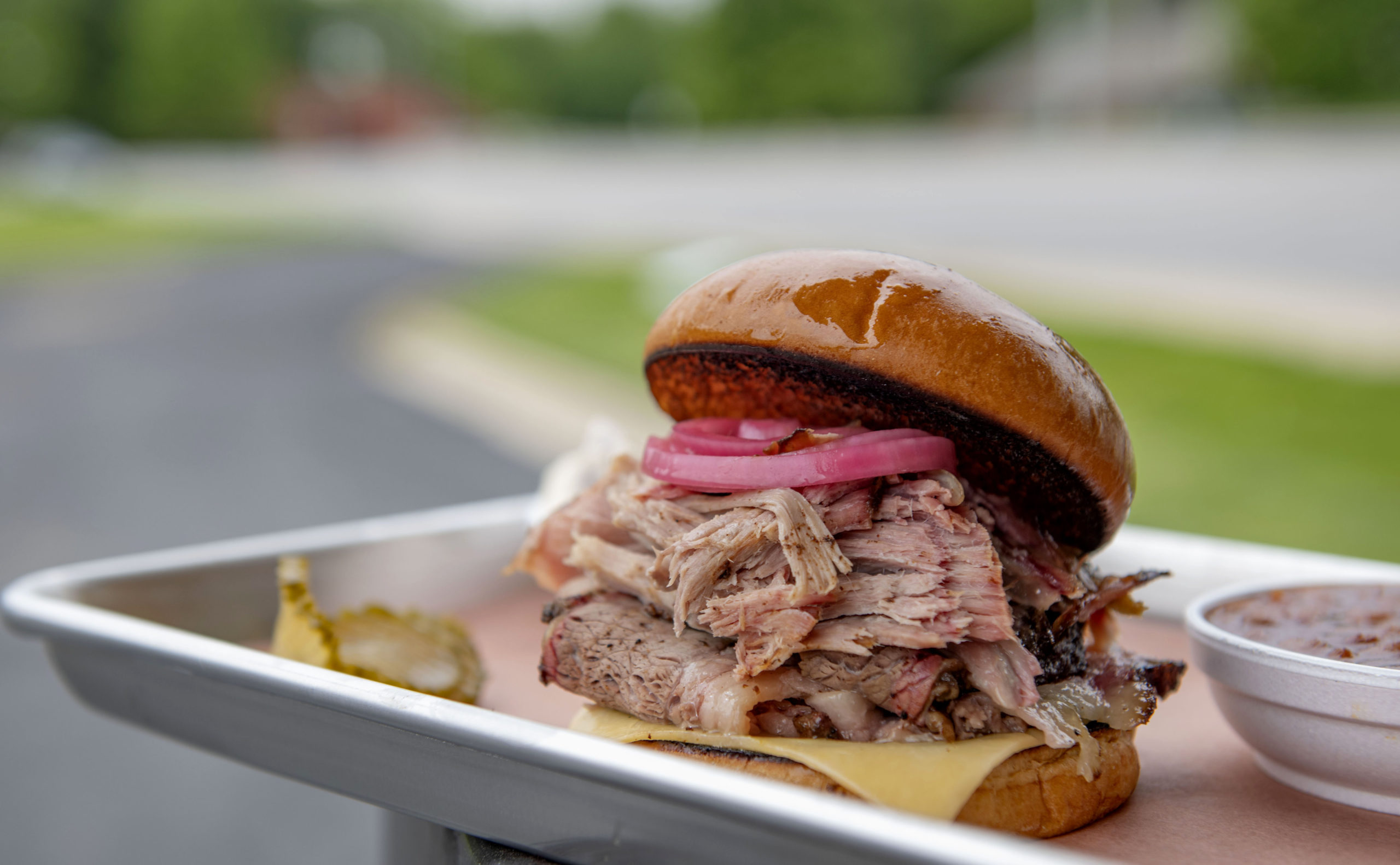 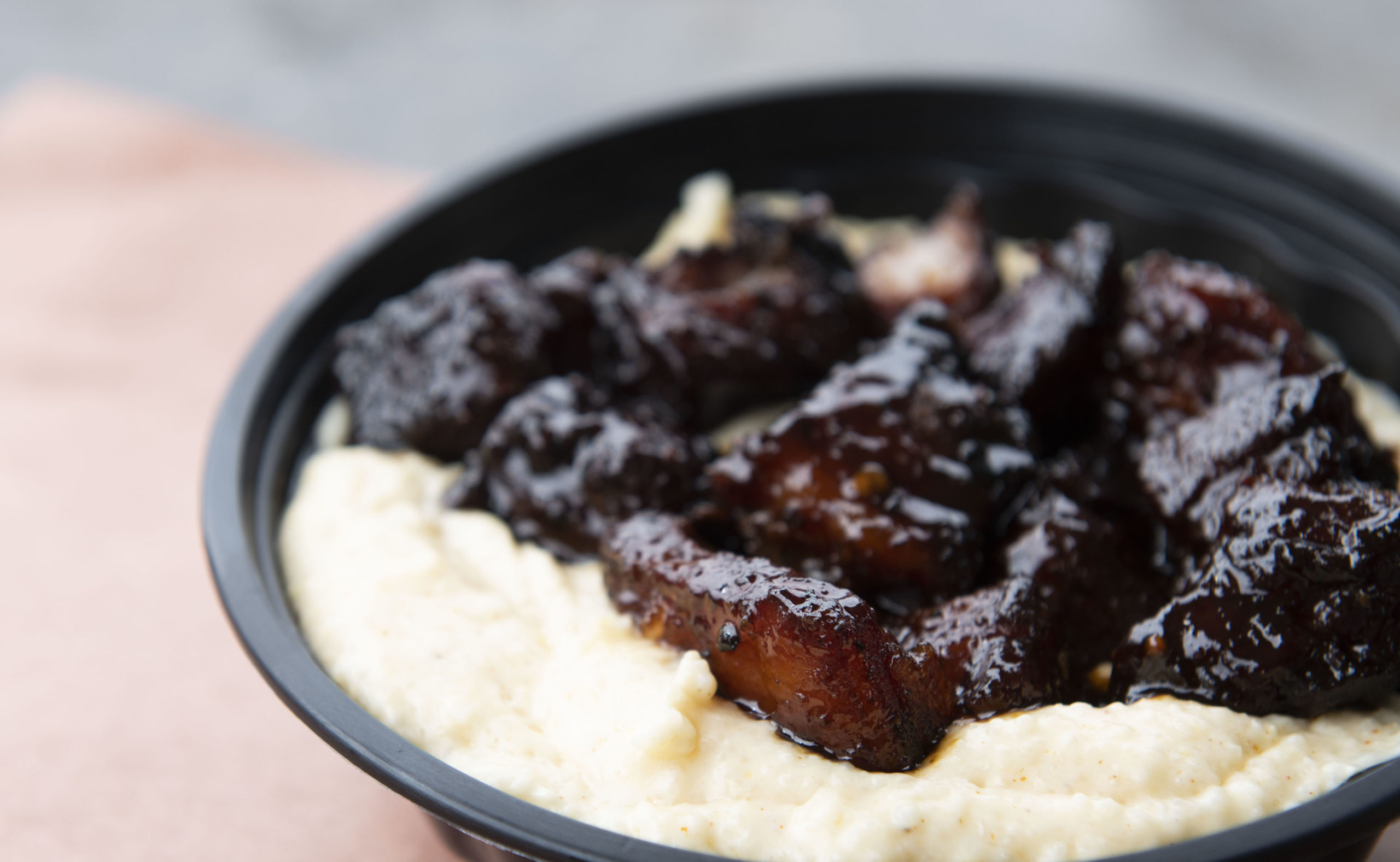 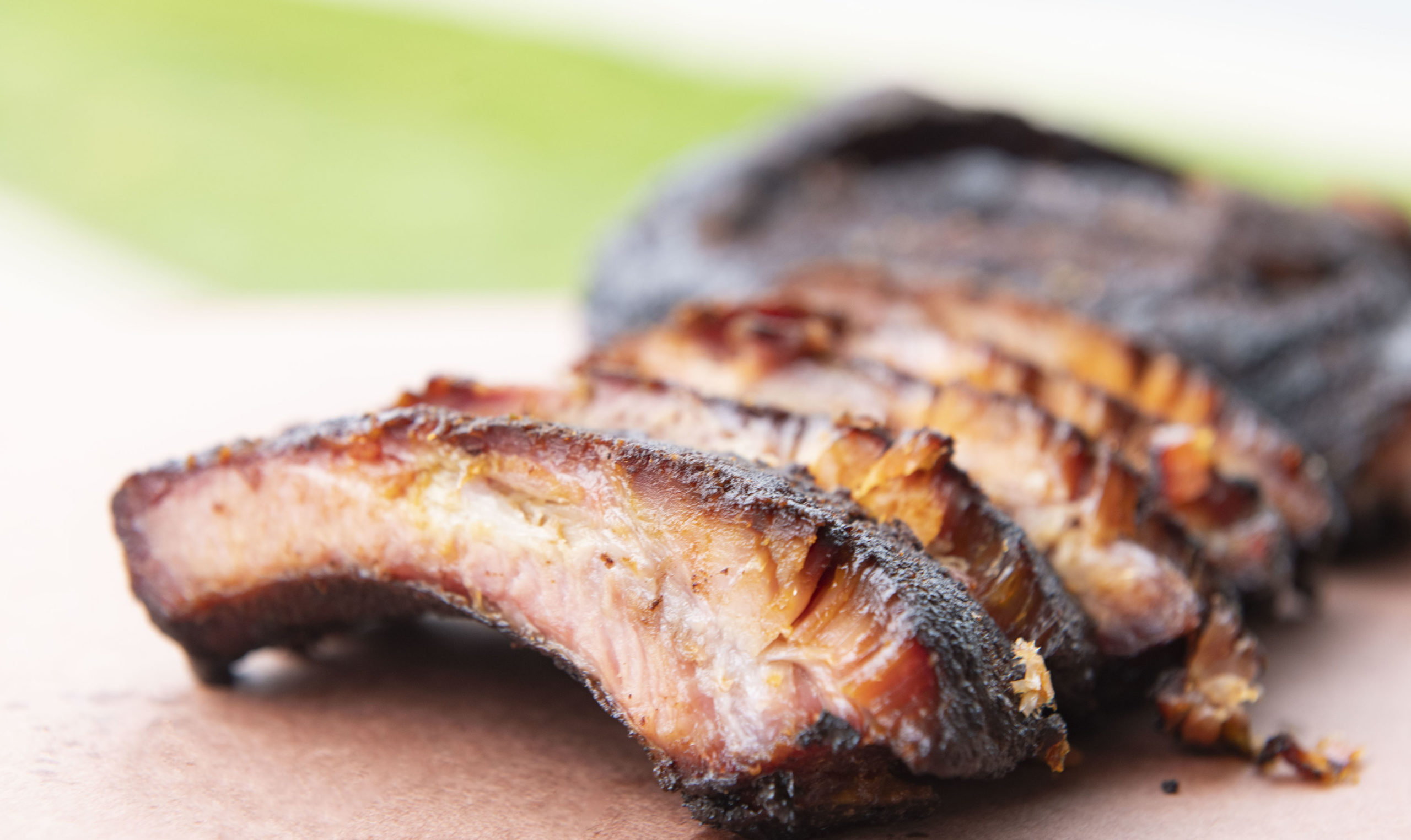 Those creamy grits are the base of the Oink and Grits. Topping the grits are cubes of Duroc pork belly that were dry marinated in a rub for eight hours then smoked for two to three more. The pork is then cooked down with brown sugar, Jaret’s barbecue sauce and butter before topping the grits.

“The pork belly is rich and the sauce from that mixes in with the grits to make it a little sweet and savory,” Janna says.

Traditional barbecue plates are available and ribs are the star of the show when they are offered on Saturdays.

All the sides — save for the bagged potato chips — are homemade. The Mac N’ Cheese — featuring Monterey jack and cheddar cheeses — and BBQ Beans are the most popular. Jaret makes two barbecue sauces, a traditional KC-style and a sweet and savory sauce. Not surprisingly, they make their own pickles as well.

“The main thing for us is that we love our customers and making them smile. We’ve gained friends we didn’t know before this,” Jaret says. “By making all the food ourselves and not buying highly manufactured sides and stuff, you’re putting your heart into it. You’re treating people the right way.”

The Jiggy Pig’s hours and locations vary depending on a variety of items, but Jaret says there’s an easy way to keep up with them if your nose doesn’t lead you right to their bright red truck already. “We’re very active on our Facebook page,” he says. “We post where we’re going to be, what day and time we’re going to be there and what our menu for that day will be.”

But you better get there early. Since they sell their food until everything’s gone, it’d be a shame if the person in front of you took the last Jiggy Pig all the way home.

The Oink and Grits features pork belly that is dry marinated and smoked before it is mixed with butter, brown sugar and homemade barbecue sauce. The tasty pork cubes are then placed on top of Jaret’s white cheddar grits.