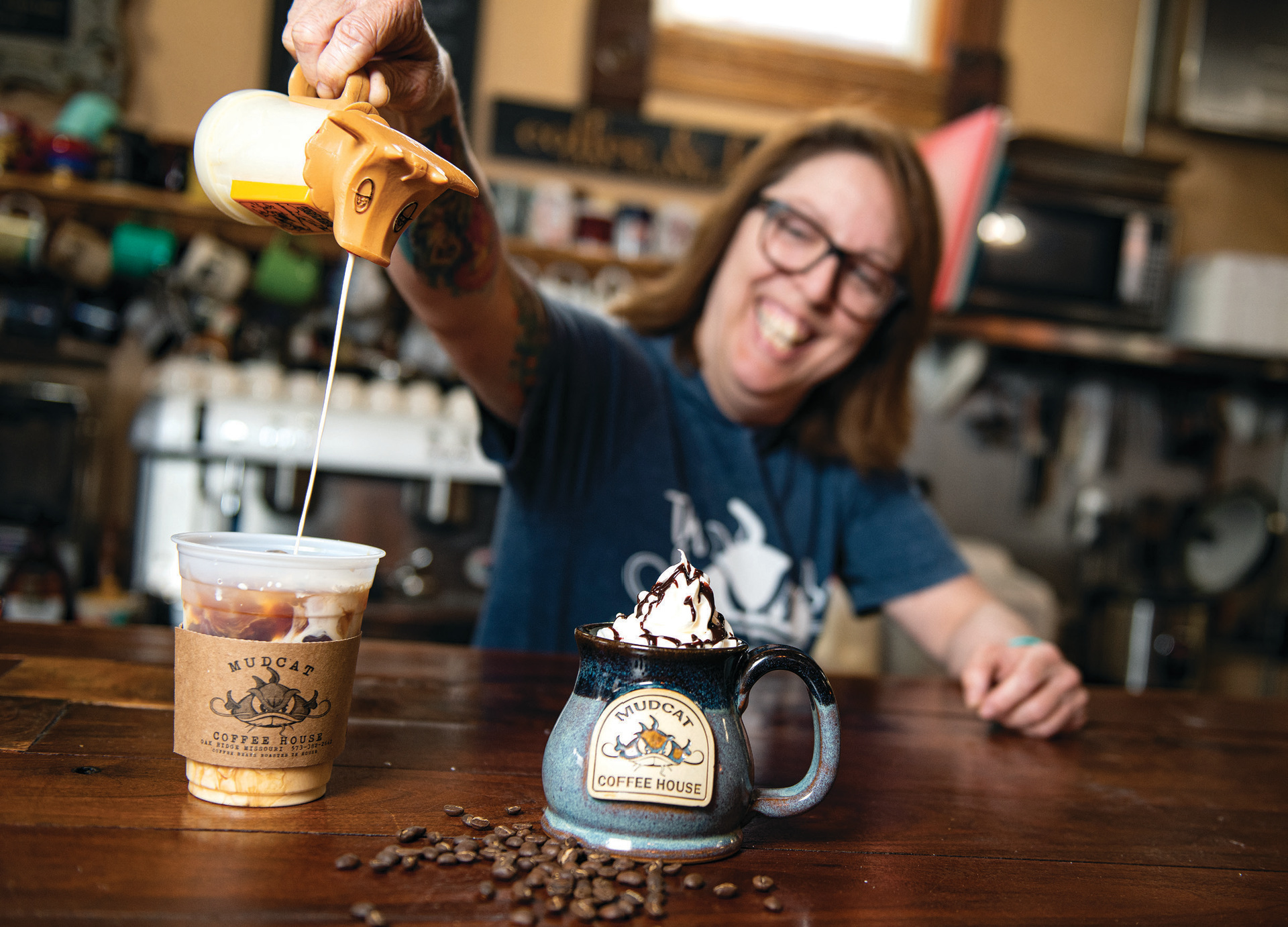 You can order off the extensive menu at The Mudcat Coffee House. But then you would miss out on all the fun of having owner Rebecca Moore surprise you with one of her off-the-cuff creations. This culinary leap of faith has a name: The Matt.

“It’s named after a good family friend who has eaten with us for five years,” says Rebecca. “In the five years he maybe has ordered off the menu twice. He comes in and I say, ‘What do you want?’ and he says, ‘Yep.’ That’s his order. So I just start cooking.”

Ask for The Matt and the only questions Rebecca will ask you are, “Breakfast or lunch? Spicy or not spicy? And is there anything you don’t like?” Then she will head to the tiny kitchen in one corner of the cafe and dream something up.

“I’ve done omelets the size of cookie sheets,” the Citizens Electric member says. “I’ve done gourmet burgers. I’ve done pork rind nachos. Sometimes I’ll change it up two or three times on the grill. All the times I’ve never had one person not like it.”

That includes a group of 16 who came in and challenged Rebecca by all ordering The Matt. As the food came off the grill, she put the plates on the bar and encouraged the patrons to fight for it if they liked it.

“It turned out good,” she says with a smile.

The Mudcat got its start in Oak Ridge, a town of 242 north of Cape Girardeau, five years ago but in a different location. At that time, it was just a coffee shop with some excellent baked goods. When it moved to the current location — a former hardware and coffin store built in 1898 — the offerings expanded into a full menu.

“It’s good down-home country cooking, but if you are watching your weight or on a certain diet, all you have to do is tell me,” Rebecca says. The food can best be described as something Grandma would cook if Grandma watched the Food Network every night.

Rebecca prides herself on finding unique twists to everyday foods. For example, her biscuits and gravy, served on Saturday and Sunday only, are made with deep-fried biscuits and with potatoes in the gravy.

Then there’s the Kitchen Sink. Everything is thrown into this popular item, including deep-fried biscuits, some type of potato, veggies, meats and a topping of gravy and eggs. For those who shudder at the huge portion, a scaled-down Bathroom Sink option is available.

The Haystack came from one of Rebecca’s wanderings. She loves to travel and discovered this one in a small-town restaurant in Tennessee. To make it she covers biscuits with ham, sausage, gravy and eggs. One customer told her she needed a smaller Haystack. “I said, ‘You want the Straw Bale?’ They called me a smart-aleck but I thought it was pretty cute.”

Rounding out the all-day breakfast offerings are a Breakfast Chimichanga, Potato Cakes and Brown Sugar Vanilla Waffles. You can also get six different omelets, though if you want some other combination of ingredients Rebecca is happy to deliver.

Tacos are bestsellers on the lunch and dinner menu. The most popular are the pulled pork tacos, made with The Mudcat’s smoked meat. It starts with a cilantro-lime tortilla heated on the grill, then filled with pulled pork, shredded carrots, homemade jalapeno jelly and topped with barbecue sauce.

“Everybody loves not only the tacos but they like the chips to go with it,” Rebecca says. “We always offer house chips that have my fry seasoning that I make from scratch and our cilantro lime seasoning and the option of salsa or queso with it.”

The tiny kitchen led to special ways to make the most of the limited cooking space. “If I have smoked pulled pork, I want to be able to come up with five ways to use that. I have a big variety on my menu, but I was resourceful in trying to use that product in different ways,” Rebecca says.

For example, Rebecca pre-cooks chicken and shreds it so it is ready for the next day. For the House Chicken sandwich, she takes the chicken, mixes it with cream cheese, smoked Gouda, Parmesan and mozzarella cheeses and special seasonings, then forms it into a patty. This gets seared on the grill and served open face on toasted sourdough bread with arugula, tomatoes and bacon topped with homemade garlic dressing. “I like to pair it with sweet potato fries that have a bourbon molasses seasoning on it. Or they can choose any kind of fries,” Rebecca says.

There are seven similar types of sandwiches, including a Philly, Crispy Chicken and the Sweet Carolina. There’s also a large selection of hand-pattied burgers. These include an open-faced Horseshoe and the Farmers Special, which combines a burger, chicken patty, pulled pork, bacon, an egg and barbecue sauce. 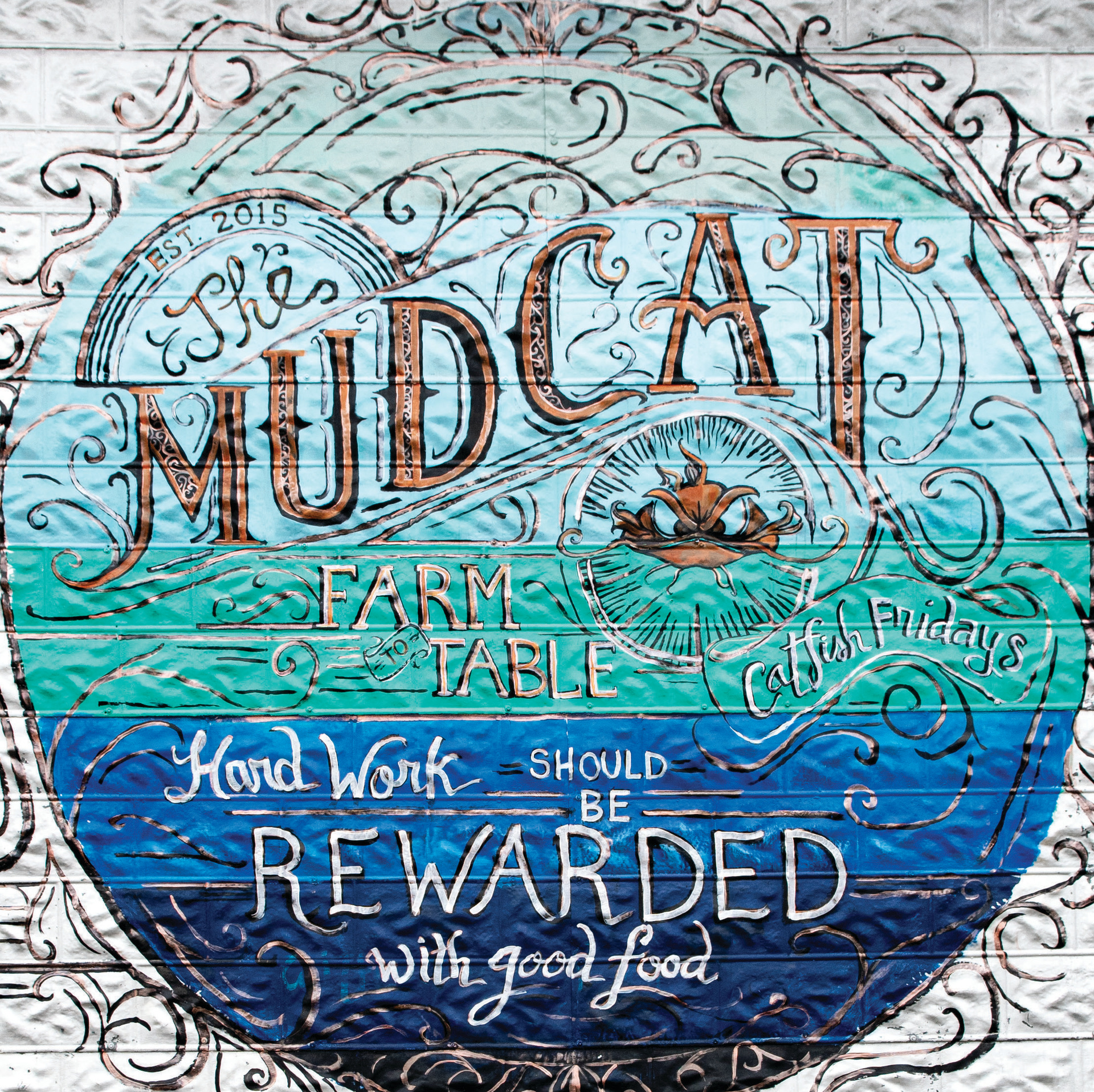 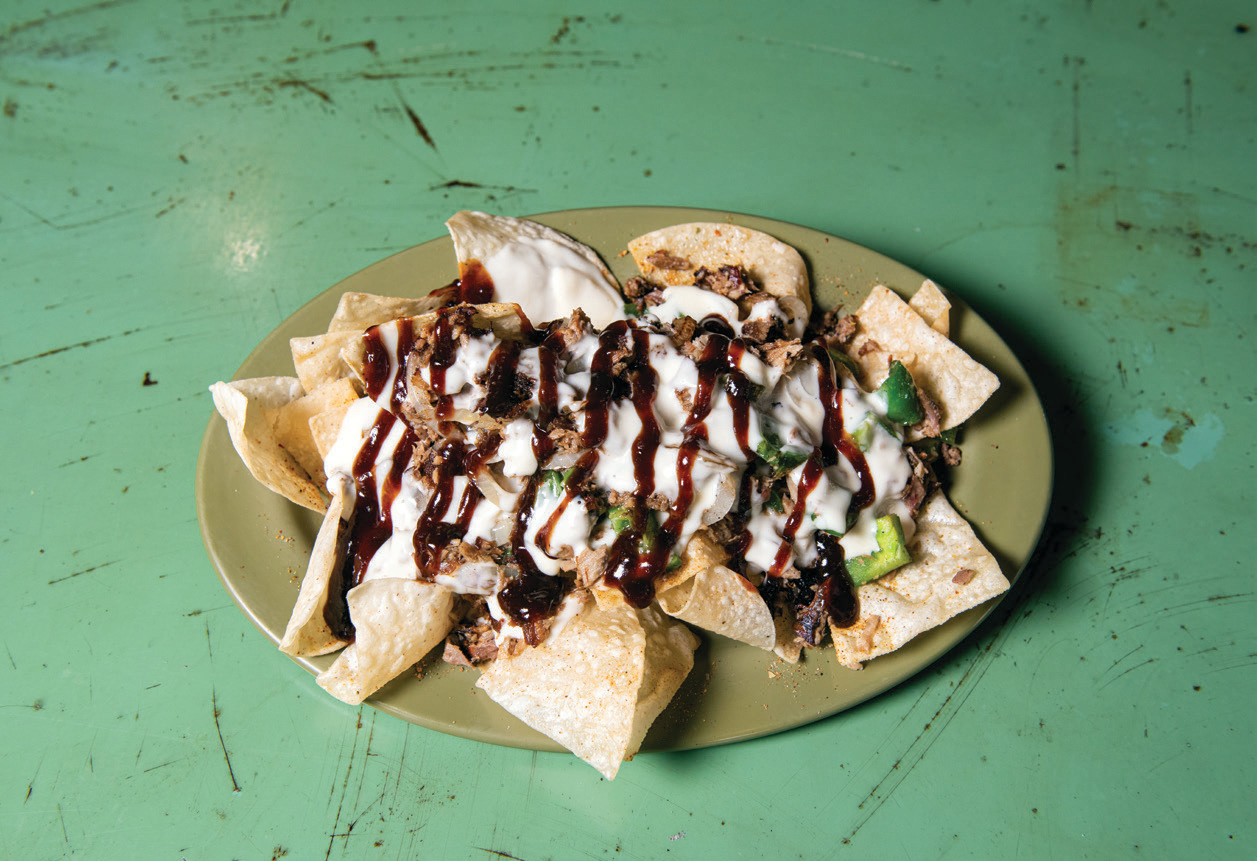 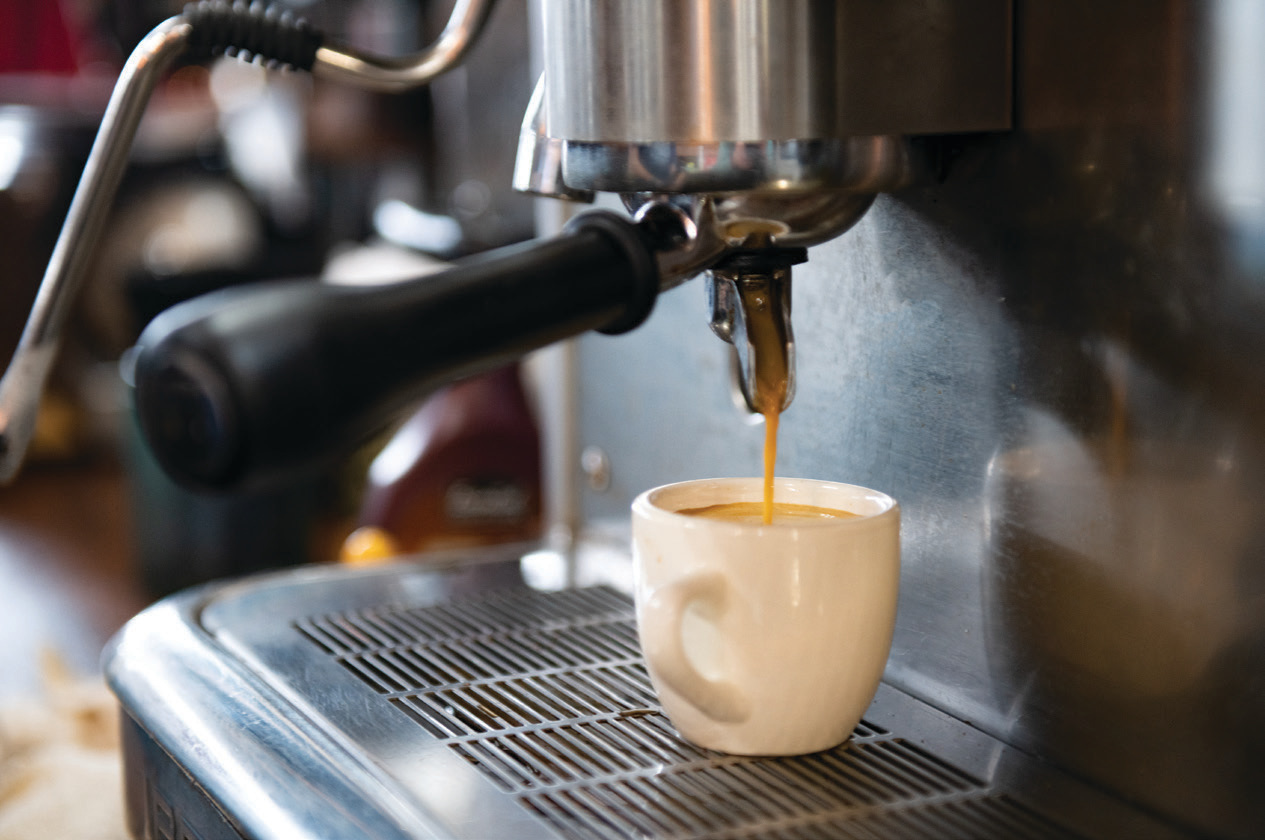 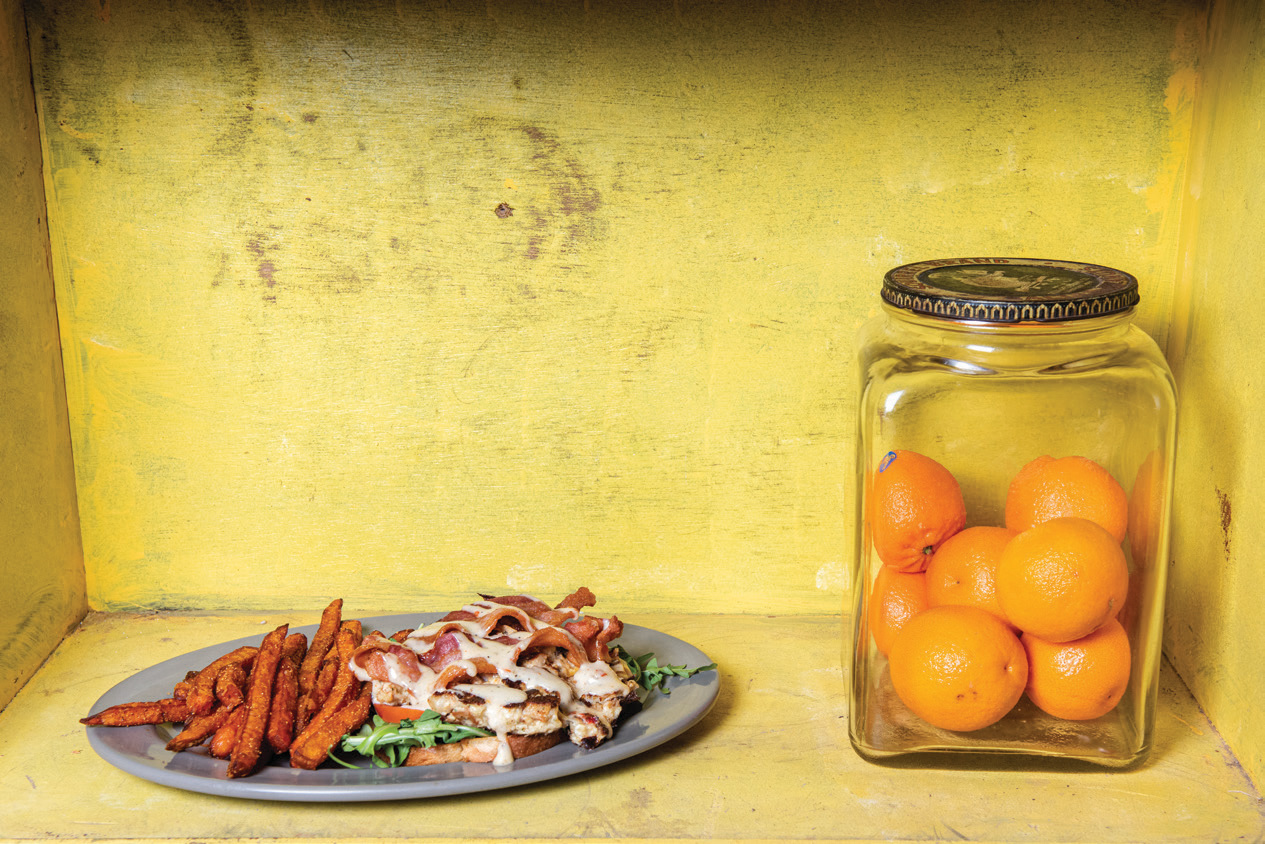 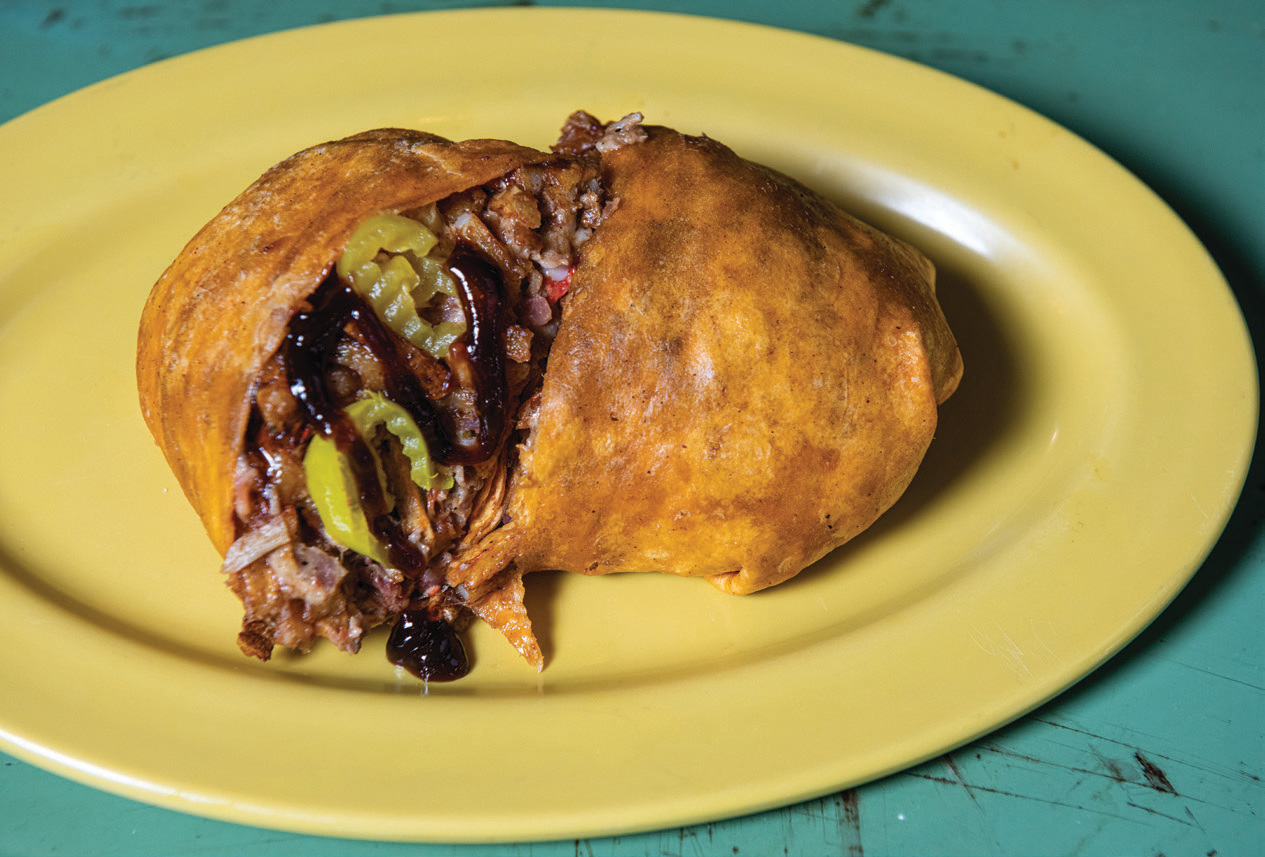 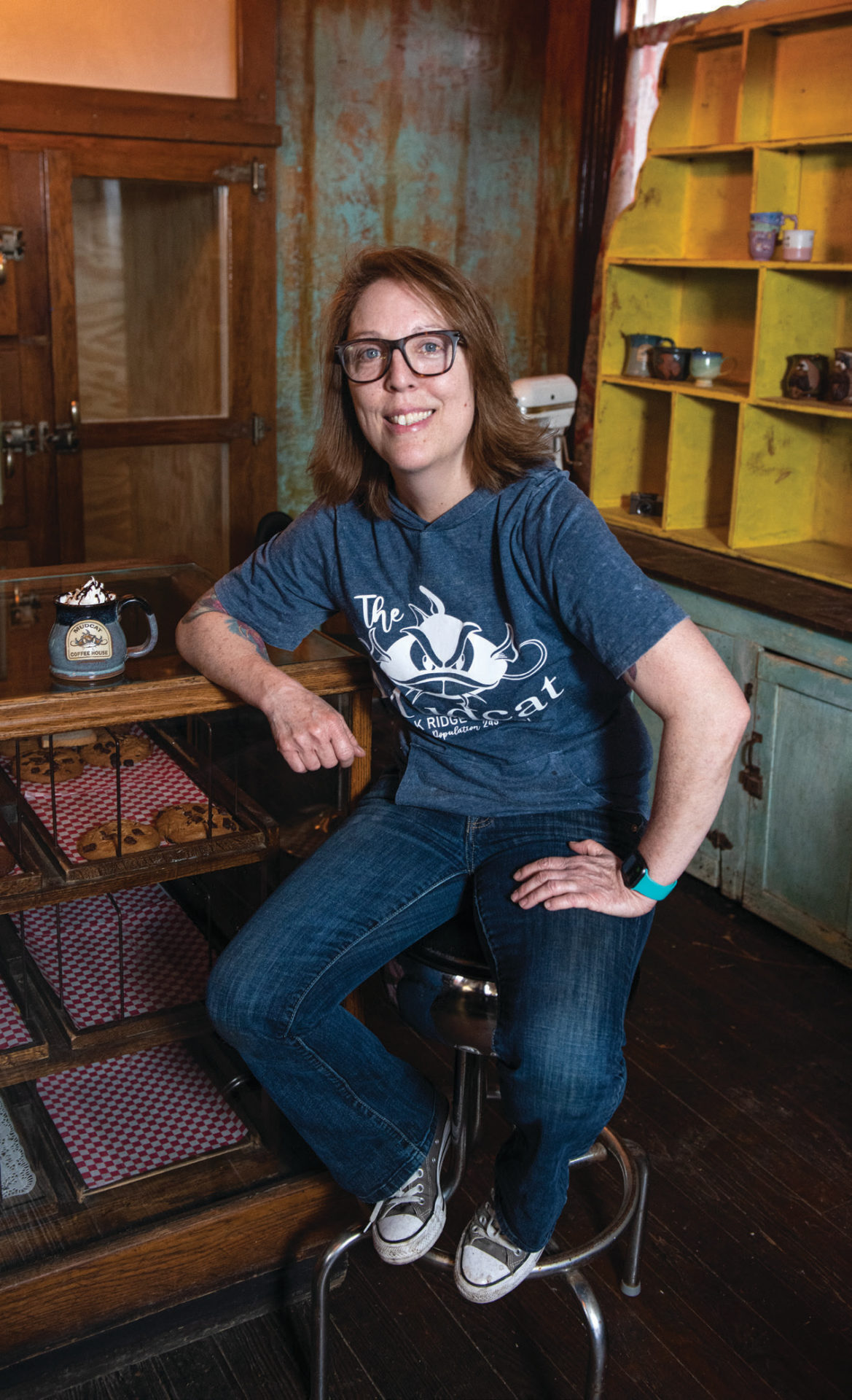 The food can best be described as something Grandma would cook if Grandma watched the Food Network every night.

Whatever you order, she won’t skimp on the portions. Take the Boss Hog wrap. Normally wraps are reserved for lighter fare, but not at The Mudcat. “You better be hungry when you order it,” Rebecca cautions.

The Boss Hog starts with a generous portion of smoked pulled pork that is mixed with bacon, banana peppers and smoked Gouda. It’s topped with mozzarella, French fries and queso, then tightly wrapped in a 14-inch sun-dried tomato wrap. “When it’s on the grill it’s massive,” Rebecca says. “A lot of people don’t think it’s going to get wrapped. It’s got a lot going on with it, with the queso, the banana peppers and the crunchiness of the bacon.”

Specialty hand-cut fries in full or half orders round out the menu. These can be ordered in a number of ways, including the Mud Fry, which is topped with pulled pork and barbecue sauce.

Of course coffee is a specialty of The Mudcat. Rebecca sources her beans from local roasters. She samples each batch black so that she knows what to pair when making the many specialty coffees at the bar. Among the specialty drinks are the Sludge, an Oreo-based frappe, and the Gato Caliente, made with ghost pepper sauce and chocolate.

All of this is made to order, with any reasonable requests fulfilled.

“This is not just The Mudcat,” Rebecca says. “It’s got my name attached to it. So when you come in here and spend your money I want you to sit down and have a good hearty meal that not only sticks to your bones but the flavors are fantastic. I want you to go away and 2 miles down the road you’re still thinking, ‘man that was awesome.’”