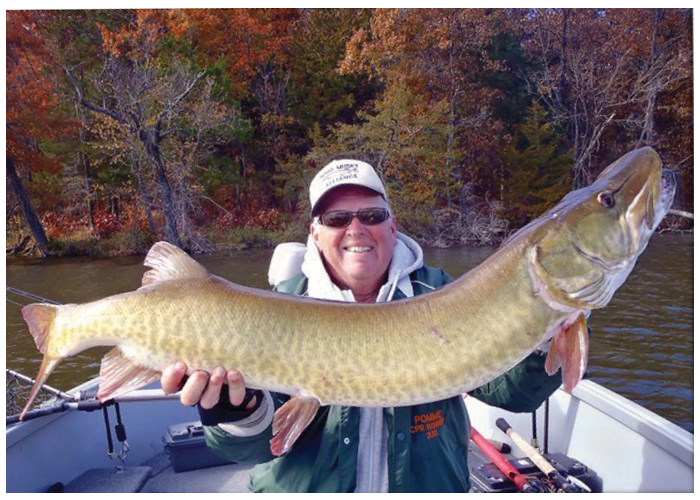 The muskellunge, or “muskie”, is known as the fish of 10,000 casts due to its elusiveness. Tim Dunaway knows it only takes that first one to hook an angler for life. “We were fishing for bass when we caught it,” Tim says, recounting the 2006 trip he and his son, Tyler, took to Henry Sever Lake Conservation Area near Newark. “After we caught one, we thought, ‘let’s do it again.’ I only wish I had started earlier.”

The sleek predator is a top-tier game fish. Although sometimes difficult to find, that patience is rewarded by the adrenaline rush muskies provide when hooked, similar to hybrid striped bass if they resembled torpedoes lined with teeth. Watching the fish silently mimic a lure’s movements in the water or leaping to attack it boatside is excitement enough. Actually landing one of these 3- or 4-foot long missiles is the experience of a lifetime.

The muskie is commonly associated with the Great Lakes region and Canadian Shield. But Missouri anglers who don’t mind putting in the effort have an advantage: rather than save money and vacation time for a trip north, they need look no farther than the Show-Me State. Since 1966, the Missouri Department of Conservation has stocked muskies at Pomme De Terre Lake. Today, anglers can find them there and at four other Missouri lakes: Henry Sever and Hazel Creek Lake in northern Missouri, Lake 35 at Busch Conservation Area near St. Louis and Fellows Lake north of Springfield.

“When the stocking program started, driving somewhere you could go muskie fishing was kind of an arduous trip,” says George Donner, president of the Pomme de Terre chapter of Muskies Inc. “Now, it’s evolved to where Missouri residents have an opportunity to go catch a muskie even if it’s by accident.”

For a sport so strongly associated with the northern U.S., Pomme de Terre’s chapter is the fourth-oldest of Muskies Inc. The nonprofit organization is dedicated to the conservation of the muskellunge, improving muskie fisheries and educating anglers. George says the Pomme chapter hosts annual events to introduce muskie fishing to newcomers. The spring membership drive comes with a day of guided fishing with one of the club’s 120 members on Pomme de Terre. The chapter’s annual tournament and Guide for A Day fundraiser are held there in the fall, generally agreed to be the best time for Missouri muskie fishing. Proceeds support other Muskies Inc. and Pomme chapter projects.

Club member Earle Hammond, also a professional muskie guide and senior regional director for Muskies Inc., says newcomers do not need expensive tackle or even a guide and boat to try their hand at muskie fishing. Trade in monofilament for braided line on your bass reel and fish large lures across shelves of rock, along docks and submerged rocks or timber and you’re well on your way toward attracting the ambush predators from their murky dwellings. Just make sure to bring along a net large enough to safely land the fish, tools to unhook it and a camera to capture the moment. “Just make sure at the end of every cast to look down and behind your lure and do a figure eight, especially if you’re new,” Earle says of the all-important muskie maneuver. “They follow maybe a foot deep or behind and you don’t always see them until you’ve turned them a little bit.”

Although Missouri’s muskies do not normally grow as large as their northern kin, the state’s relatively warmer winters mean the fish grow year-round, typically topping out in the mid-40-inch range. Fifty inches is considered trophy territory — and a few caught in Missouri have bested that mark — but the fish’s rarity and the difficulty in landing one make any muskie a thrill on the water. The Northeast Missouri Musky Alliance posts any angler submitted photos on their Facebook page along with some basic information on the length, time caught and lures used.

“The second biggest thrill is the release and watching them swim away,” Tim says. “They are a limited resource, the state is putting a lot of money behind it to give us the opportunity to catch them, so we need to protect them and allow them to thrive.”

Mike Anderson, the muskellunge program coordinator for MDC, says the department’s objective behind the stocking is for an angler to catch a 36-inch or longer fish for every 20-40 hours of effort. Thanks to anglers who participate in the Show-Me Muskie Project, which allows them to log information about their muskie fishing experience, MDC can determine the effectiveness of their stocking efforts and how the public is utilizing the resource. MDC has met that benchmark every year except four since the project was implemented in 2000. Mike estimates the cost associated with each fish raised at the Lost Valley Hatchery in Warsaw is between $12 and $15.

“They are usually 4 inches long when we get them in June or July,” Mike says, adding the fingerlings are obtained from the Iowa Department of Natural Resources. “When the Lost Valley Hatchery staff raise them, they are typically 12 or 14 inches by October.”

They may be tough to hook and tougher to find than most fish, but muskies have a peculiar effect on those who seek them. Seasoned pros freely share lures, casting and lure motion techniques and — outside the tournament setting, naturally — even the coveted secret fishing spot. If a few thousand casts and a half-dozen tips all add up to one muskie, a beginner soon learns what the devoted followers already know: One such fish can be the catch of a lifetime.

“I’ve caught probably hundreds of bass in my life and I only remember just a few,” George says. “In 10 years, I’ve caught 25 muskies, and I can remember every one of them.”