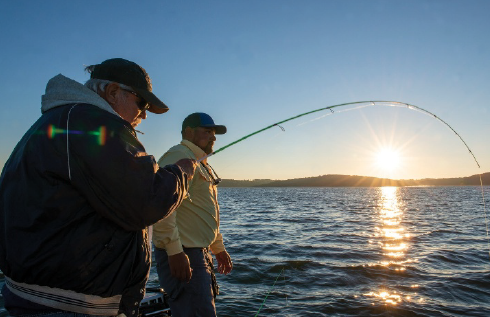 By Jin McCarty I jmccarty@ruralmissouri.coop

On a December day in 1969, 5-year-old Rod Hendricks pressed an oversized button and watched as the red light on a panel changed to yellow, then green. The lights signaled the closing of the final 75-ton gate on Stockton Dam — and the impoundment of the Sac River into what would become Stockton Lake.

Fifty years later, Rod can look out the windows of the visitor’s center where he works and see the magnificent view of the sun reflecting off 24,700 surface acres of water. Today he is operations project manager for the U.S. Army Corps of Engineers which manages the lake and dam. A photo of him during the ceremony hangs on his wall, and he still has the hard hat he wore that day.

Rod was one of three area children who served as proxies for dignitaries during the ceremony held on Dec. 12, 1969. The idea came from C.C. Cavender, president of the group that worked for many years to get the dam built. He said the project had been built in 5-year increments, so he wanted kids whose ages matched those milestones to have the honor.

The first gate was closed by Sandra Estep, age 15, of Greenfield. Next came Mark Cowan, age 10, of Dadeville. Then it was Rod’s turn.

According to an article in the Cedar County Republican, the river refused to give up without a fight: “An amusing incident happened as the first gate closed. Ol’ Sac River thrust a log under the gate so it could not close completely and had to be raised slightly so the log could pass, acting as if the old river resented maybe having her flow cut off after coursing down the Sac River Valley for so many, many centuries.”

“I was raised over here on the east end of the dam,” recalls Rod, a member of Sac Osage Electric Co-op. “My parents worked in Stockton so we drove by the dam every day going to school or going to town. It was a big thing. Some were for it and some were against it. But people would come out to see the progress.”

The idea for a dam at the confluence of the Sac and Little Sac rivers had been kicked around since the end of World War II, but didn’t gain traction until after the flood of 1951. One Stockton Dam booster, W.C. Bland, made at least 12 trips to Washington, D.C. lobbying for the project.

In March 1958, the Republican’s Editor Chester Hoff received a telegram from Missouri’s U.S. Sens. Stuart Symington and Thomas Hennings saying they were working with 7th District U.S. Rep. Charlie Brown to appropriate funds for the dam. Brown made the appeal to the House appropriations committee armed with a petition signed by thousands of Dade and Cedar county residents urging a start on the multi-million dollar project. His efforts secured $150,000, the first step in a long process before the gates closed.

By October 1958 a map of the proposed dam and reservoir was hanging in Bland’s Cafe in downtown Stockton, where it was “causing much comment and speculation,” according to the Republican. By 1961 the Springfield News-Leader was reporting that “Everything’s set — except money.” The article related that survey work and drilling to test the bedrock was going on 16 hours a day. But another $750,000 would be needed to start actual construction.

It wasn’t until 1964 that a groundbreaking ceremony was held. Ironically, too much water from torrential rain forced organizers to move the event indoors. Sen. Symington was the featured speaker, stating, “A dynamic change is taking place across the face of our state. With over $800 million in Missouri projects now either underway or planned, we are moving, and at a rapid pace, to meet the vital modern challenge of water resources development.”

Now farms, homes and businesses displaced by the rising waters had to make plans to move out of the area. One of the places affected by the lake was Hammond Mill in Greenfield, which had to be moved to higher ground.

While much of the flooded area would be razed by bulldozers, farm ponds were left in place. In 1968 a National Guard helicopter was used to help Missouri Department of Conservation employees stock largemouth bass and minnows into 41 ponds that would be impounded as the lake filled. It was hoped that stocking minnows along with the predator fish would create a fishable population within a year.

When the final pieces of the project were put into place, Stockton Lake and Dam would cost taxpayers more than $80 million. Yet the Corps estimates it has saved more than $320 million in flood damages. Hydropower from its single 52-megawatt generator returns $8 million in a typical year. Stockton Lake provides drinking water for the city of Springfield, and studies are being done to see if more communities can use its water.

Recreational opportunities abound here, especially for sailboat enthusiasts. There’s even a sailing school located at the lake, and the Governor’s Cup Regatta has been held here for 44 years.

Two state record fish — a 7-pound, 2-ounce smallmouth bass and an 18-pound, 9-ounce northern pike — have been pulled from Stockton Lake. The fishing here is so good that one guide recently moved his operation from Lake Taneycomo and Table Rock Lake to Stockton Lake. And with 298 miles of shoreline, 12 parks including Stockton Lake State Park and 35,000 acres of surrounding land managed for wildlife, there is something here for everyone.

Looking back, Rod said his role in closing off the river probably didn’t influence his career with the Corps of Engineers. But growing up next door to the lake did foster a love of the outdoors, leading to a degree in fisheries and wildlife management. “I should be retired now since I started when I was 5,” Rod says with a smile. “Growing up, we always went to the lake to fish and recreate and I was around the lake all the time. I think in the back of my mind I always hoped to come back to Stockton Lake.”