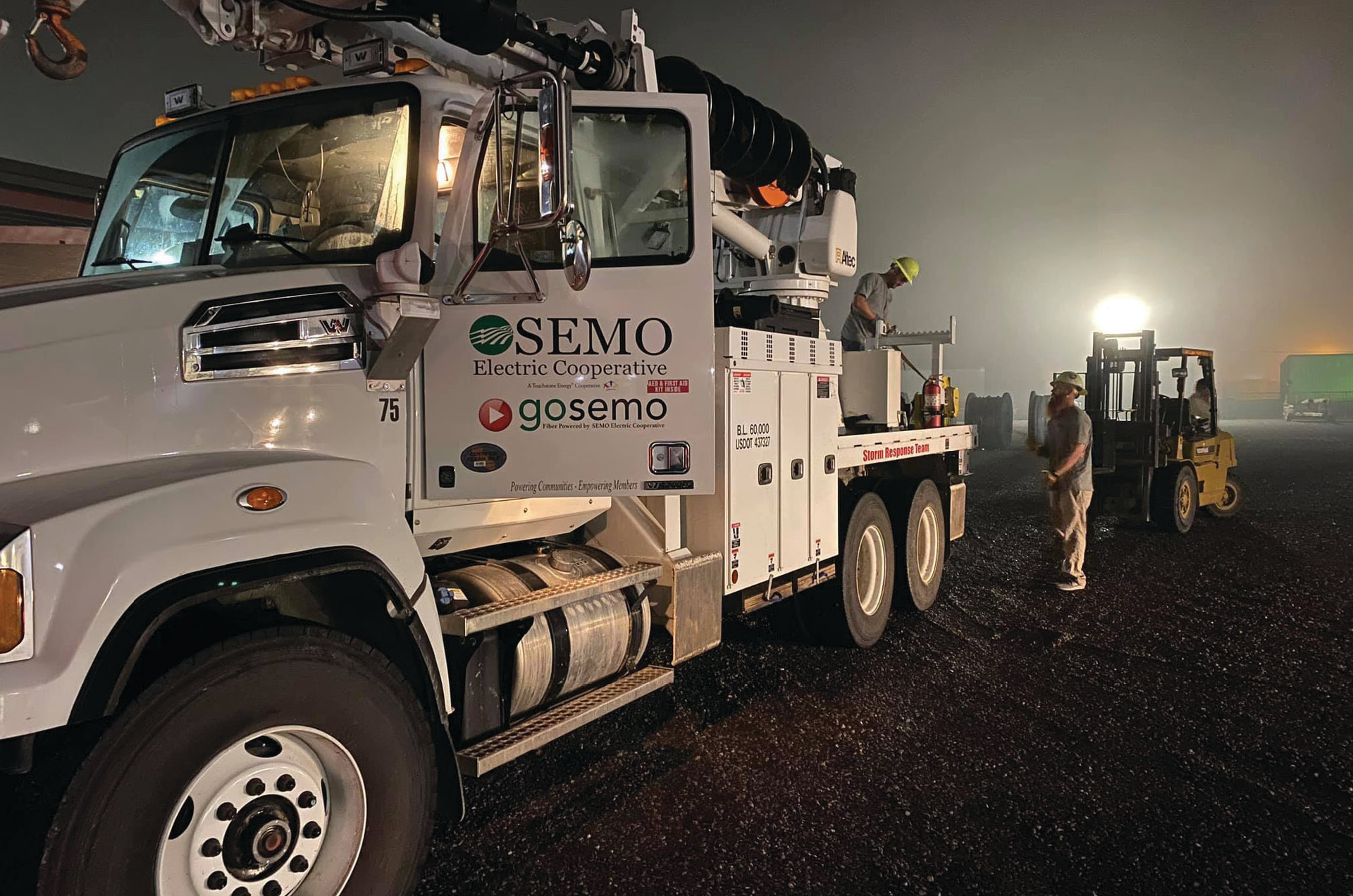 Then it was electric co-ops in Iowa asking for assistance when tornadoes flattened power lines and much of the state’s corn crop.

But the loudest cry for help came from Louisiana, where Hurricanes Laura and Delta left entire cooperatives without a meter turning. By the time Hurricane Laura restoration efforts wrapped up as the calendar turned to October, Missouri would send three waves of lineworkers totaling 359 men and their equipment south to aid in the repairs. They were part of a workforce of 1,200 additional linemen from Alabama, Georgia, Mississippi, Missouri, Tennessee and Texas who assisted with repairs.

A new round of assistance came just weeks later as Hurricane Delta added insult to injury.

Right in the crosshairs of both hurricanes was Beauregard Electric Cooperative based in DeRidder, Louisiana. When Laura passed through on Aug. 27, it left all 43,000 of the cooperative’s members without power. That’s where Missouri’s crews would focus their efforts. 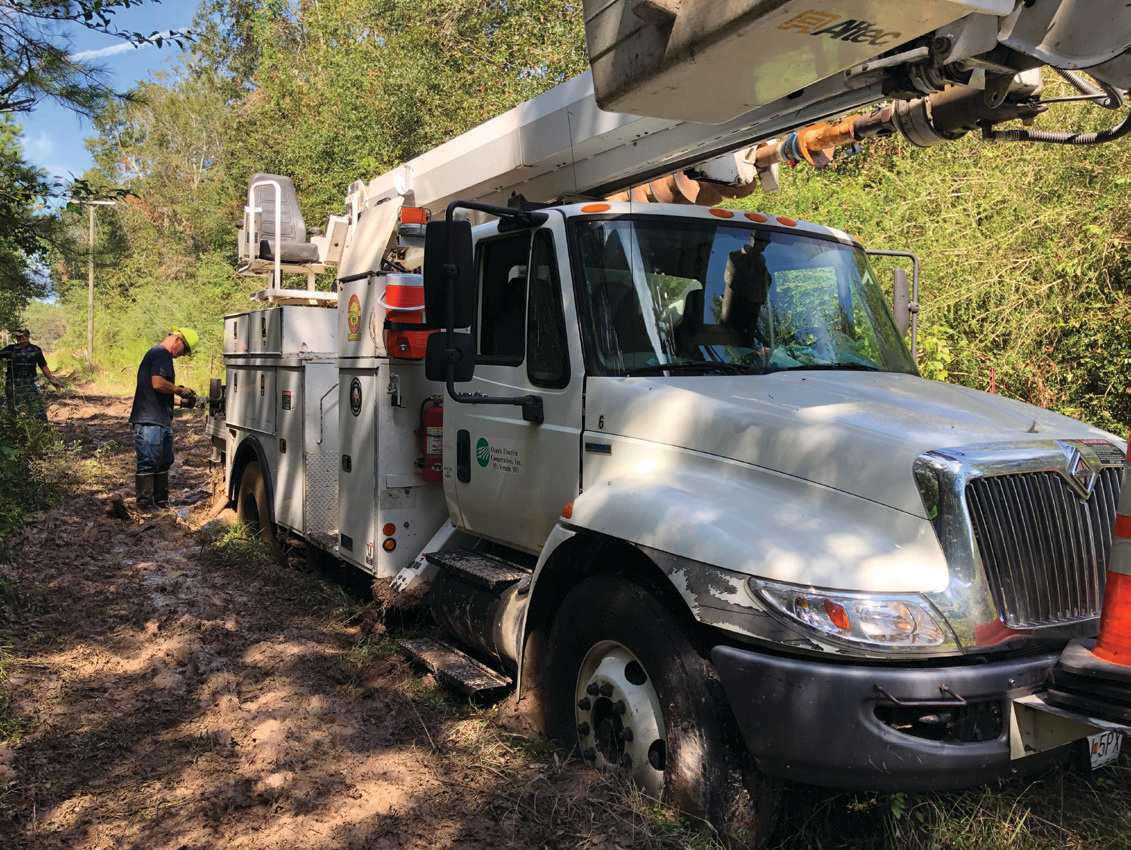 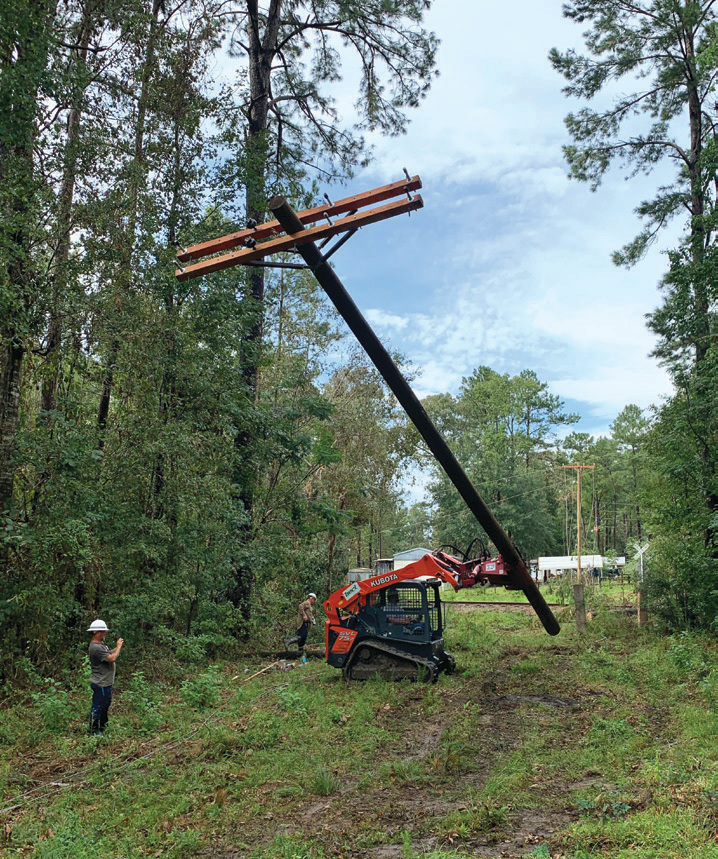 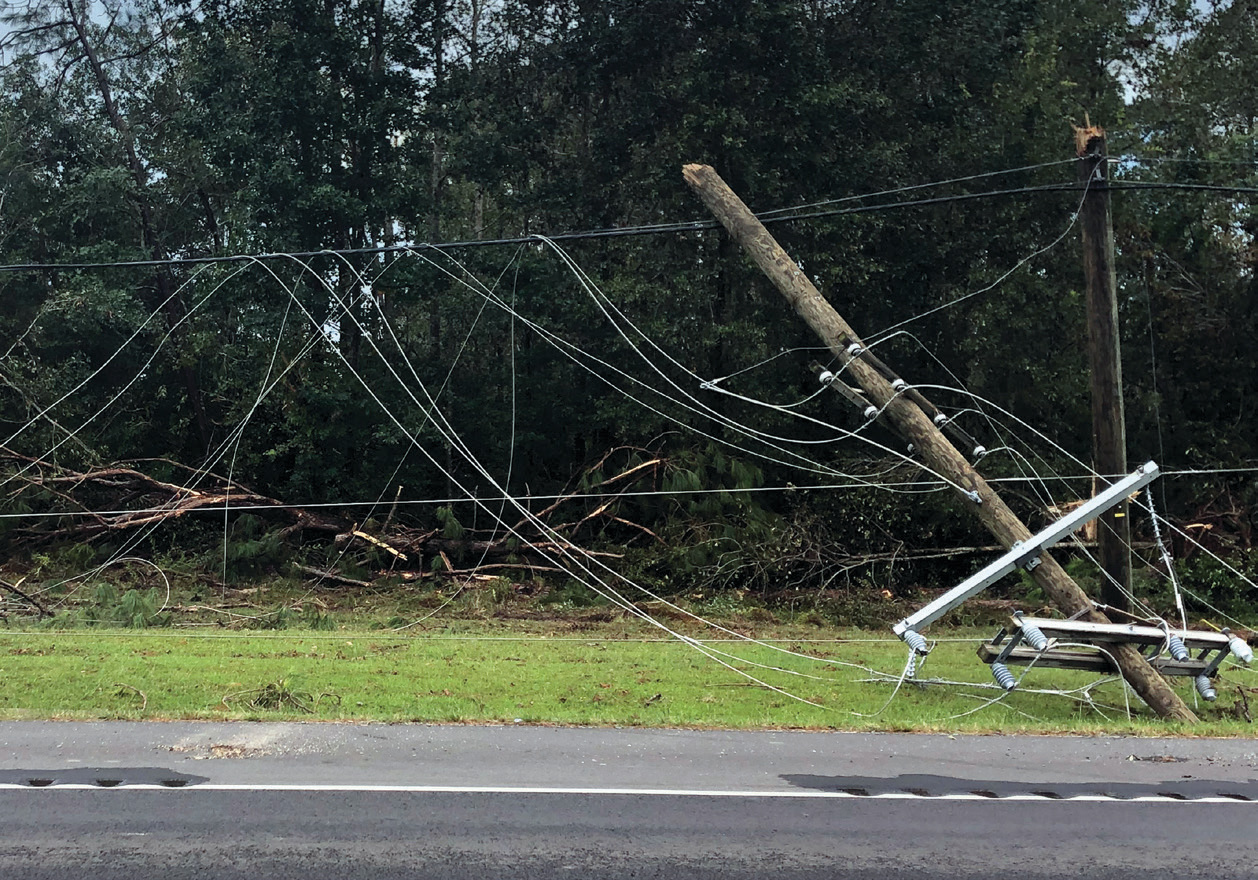 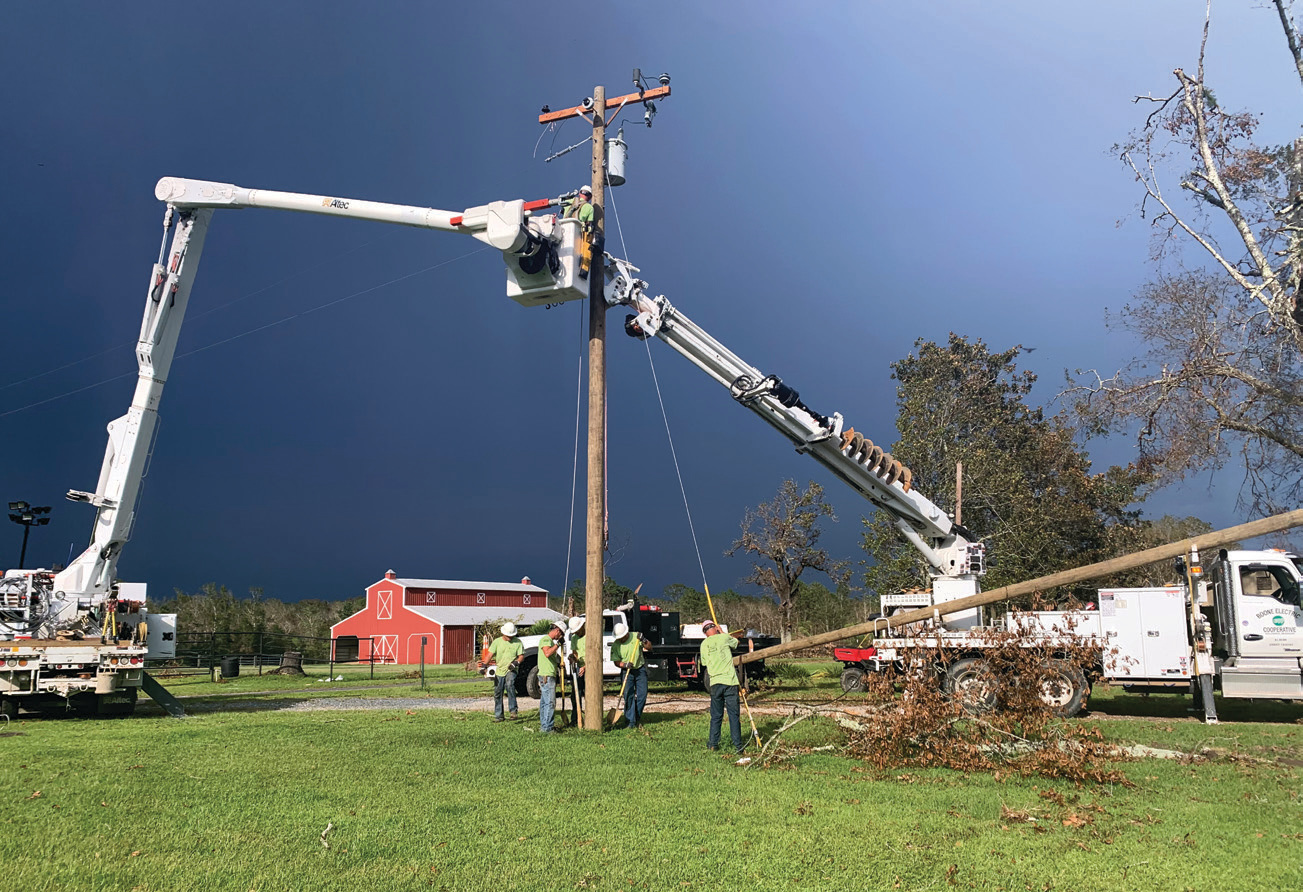 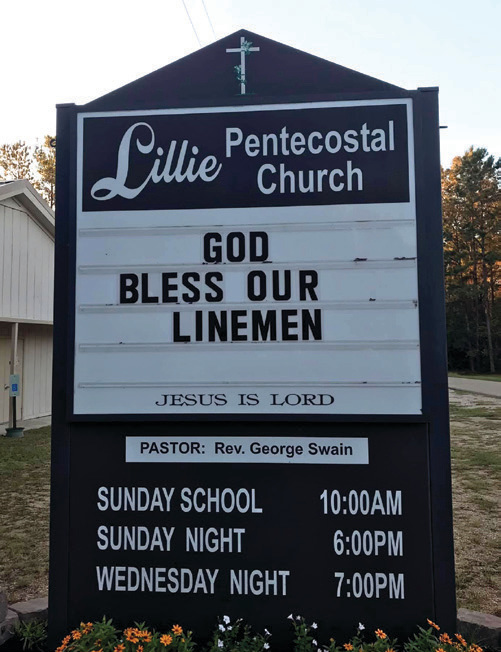 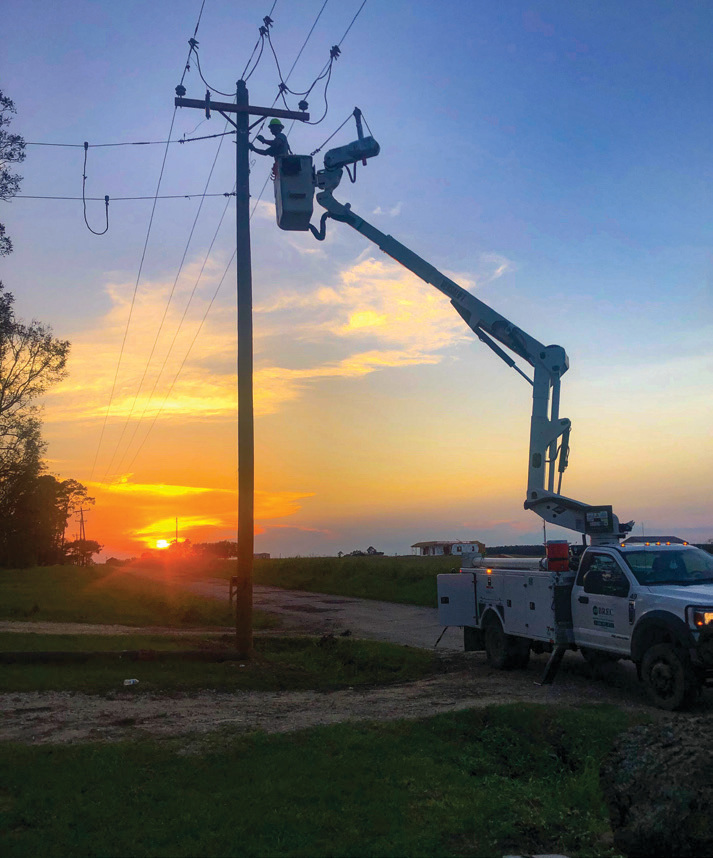 “Hurricane Laura destroyed an infrastructure that took over 80 years to build. Without the help of our sister co-ops and contract crews, this restoration effort would not be possible,” says Beauregard’s General Manager Kevin Turner. “These guys were away from their homes and family, working long days to help each of our 43,000 members. It’s these kinds of people that help bring hope back into our communities that not only will we rebuild, but we will be better than before.”

Veteran linemen, used to seeing nature’s fury, were awed by the devastation caused by Laura.

“Every line had something wrong with it,” says Johnie Hendrix, a safety trainer for the Association of Missouri Electric Cooperatives who made two trips to the hurricane zone. “The men would think they were making progress, then they would turn the corner and that span was worse. They had to touch every span of wire, every pole.”

Three weeks after Hurricane Laura’s 150 mph, Category 4 winds wreaked havoc on the cooperative’s power lines, its members once again had to batten down the hatches as Tropical Storm Beta inched closer. Concern for the safety of the lineworkers temporarily halted the relief effort.

The storm dropped buckets of rain on an already soggy landscape, but its forecasted winds didn’t materialize. The heat index soared to 105 degrees. Some repairs required standing waist deep in water, ever conscious of the threats from alligators and cottonmouths, not to mention hordes of mosquitoes and love bugs, a harmless but annoying fly.

“The mosquitoes weren’t so bad. We’ve got mosquitoes at home,” says SEMO Electric’s Joe Hill, a 31-year veteran lineman. “But the love bugs — they don’t bite but they sure like to swarm around you. They really seem to like those white trucks.”

At one location, the men restored power to a home that was the last in the neighborhood still in the dark. “She walked in and flipped the switch. The light came on and she just lost it,” Joe says of the homeowner. “She was laughing, cheering and crying.”

On Oct. 11, another 108 Missouri linemen returned to Louisiana to rebuild what Hurricane Delta destroyed. While the damage wasn’t as severe, flooding from the heavy rainfall made tracked vehicles a requirement.

Barry Electric Cooperative lineman Tim Thompson was impressed with how patient the victims of the storm were and appreciative of the help as the crews worked to restore their power. They fed the linemen and left snacks and drinks in their trucks.

“They were more concerned with our safety than they were with getting power back on,” Tim says. “When they treat you like that it just makes you want to push that much harder.”

Through the response Missouri’s electric co-ops were able to return the favor to Louisiana which sent crews to help in Missouri after ice storms in 2007 and 2009.