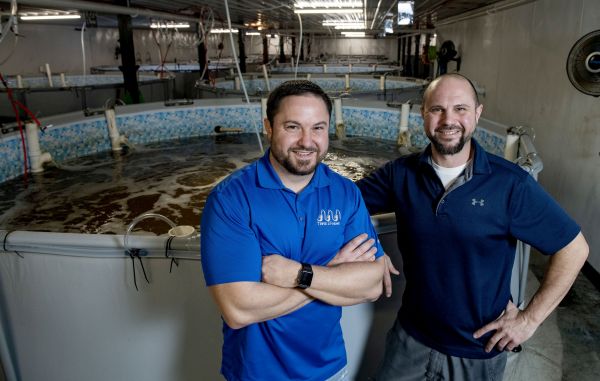 Jeff and James Howell have been raising and selling high-quality shrimp from their Foristell farm.

Judging by the sound of his voice, Dave Howell is proud of his farming legacy. The third-generation farmer grew up working the family farm in Defi ance which is still in operation. His two youngest sons, Jeff and James, grew older and sought jobs in fi nance and construction. But a trade publication article that caught Dave’s eye lured them back.

“One day I was reading about Cargill trying to develop a feed grain out of soybeans to feed shrimp,” he says. “I remember thinking: ‘Boy, raising shrimp sure seems like an interesting thing to do.’ We didn’t know how to do it of course.” After mulling it over for a few years and a trip to a shrimp operation in Indiana, it was decided.

Triple J Farms raises fresh, never frozen Pacifi c whiteleg shrimp from an all-indoor facility on the westernmost edge of St. Charles County. For more than two years, the shrimp have been naturally raised and sold directly to the consumer onsite.

“We thought it would be extremely complicated,” Jeff says, referencing his thoughts before the Indiana trip. “But when you looked at it, there are a lot of intricacies, but once you fi gure out what exactly is going on in the tank, you can replicate it. You start fi guring out how to keep everyone alive and ensure they grow up nice and big.”

Jeff, James and Dave started with eight 3,500-gallon, 14-foot round production tanks inside an existing barn on a piece of family property. While the address is in Foristell, the rural farm and store are at the end of a short gravel driveway halfway between Interstate 70 and the Missouri River bridge in Washington. 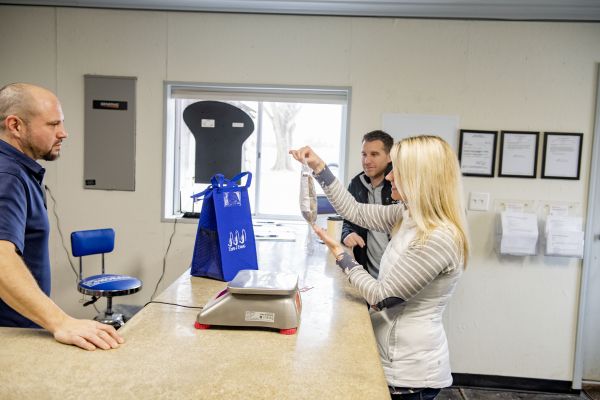 Customers Kristin and Vance Porlier inspect their pound of shrimp as James sold them at the farm.

Triple J Farms — eldest son Jason makes up the third J — has physically grown their business twice. The fi rst expansion was one year ago with the addition of seven new production tanks to the operation. More recently a pair of nursery tanks joined the operation, growing the population inside the 5,700-square-foot facility.

At any given time, there may be up to 82,000 shrimp being raised at the farm, which is served by Cuivre River Electric Cooperative. It takes roughly four months from the time the Howells get their shipment of 30,000 10-day-old post larvae shrimp — each the size of an eyelash — from a Florida hatchery to be consumer ready. They’re sure to prepare the nursery for its new inhabitants.

“We acclimate them very slowly into the nursery,” Jeff says. “Acclamation can take anywhere from a couple hours up to a day. We put 15,000 in each nursery tank and they stay there for about 25 days.”

Jeff and James test both the nursery and production tanks daily for alkalinity, salinity, water temperature — best between 83 and 85 degrees — and a host of other measurements that ensure the shrimp will be sold to a customer. 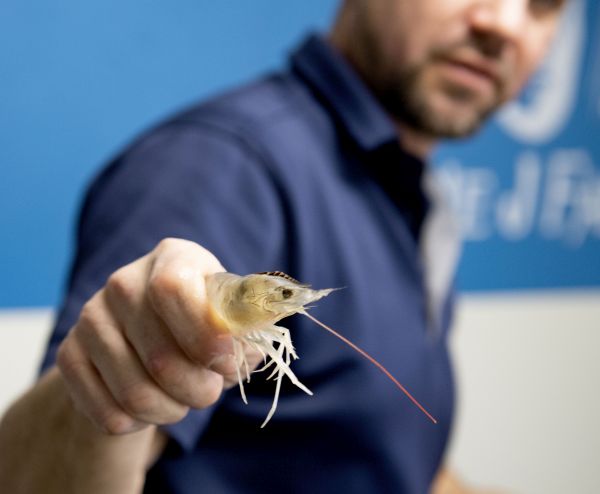 James shows off a 15-19 count shrimp ready for sale.

The pair prides themselves on the simple recipe they introduce to the tanks, each of which contains approximately 450 pounds of salt. Only domestically sourced feed, simple syrup, probiotic and baking soda are added. “The shrimp are enclosed in a saltwater environment and after feeding will have waste,” Jeff explains. “So our heterotrophic bacteria will consume the shrimp waste.”

Three of the daily tests are for nitrates, nitrites and ammonia. “Our baseline is zero, so basically no waste,” Jeff says. “That means the bacteria is doing its job so the shrimp can grow and be sold.”

The around-the-clock care includes three daily feedings. Nearly all the shrimp sales from Triple J Farms have been over the counter at the farm where they are open Thursday through Saturday. Jeff or James don’t harvest the shrimp until an order is placed. The shrimp are sold in 1-pound packages on ice, live and head-on. That last part was a struggle at first. 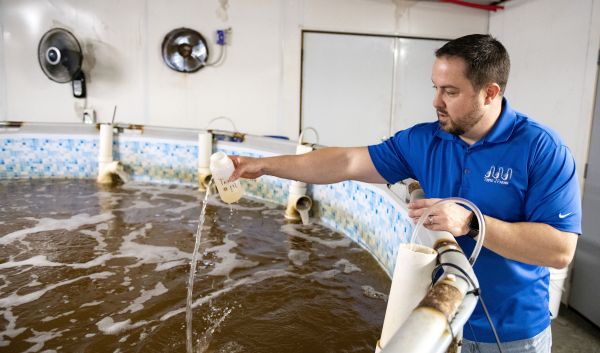 Jeff takes a sample of water out of one of the 15 production tanks for testing at Triple J Farms.

“We’re getting customers used to looking at their shrimp and the head being on,” James says. “That always flies in Louisiana with the crawfish, crab and shrimp boils. It was new around here. But it’s the freshest thing you can get.”

Jeff says offering quality and freshness is one of the main reasons they started the farm. “Shrimp is the most popular seafood choice in the United States. Ninety-plus percent is imported from Asian shrimp farms of which 2 percent are inspected,” he explains. “Of what’s inspected, 60 percent is rejected. We knew we could offer something better that was domestically sourced and locally raised.”

Triple J Farms shrimp sell from $16 to $20 per pound depending on size. While that may be a little more than you might pay at the freezer section of the grocery store, Jeff has an answer for customers who ask about the difference. “OK, but I have a live shrimp, a fresh shrimp,” he says. “I have a shrimp with the head on and you can come right back here and see how it’s raised without antibiotics, hormones or chemicals. Who knows where the frozen shrimp comes from?” 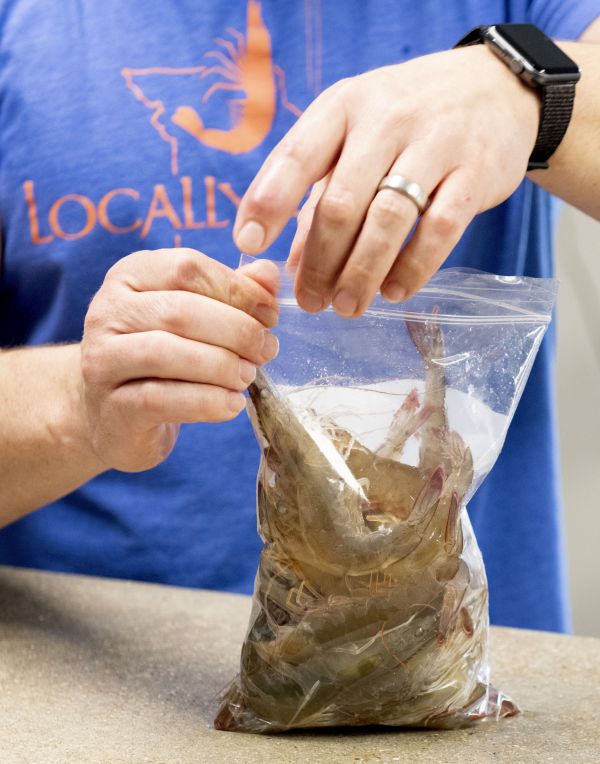 James packages a pound of shrimp for a customer. A vast majority of all the shrimp sold at Triple J Farms has been over the counter.

As for cooking the crustaceans, the pair is emphatic about one thing. Baked, fried, boiled or grilled, the shrimp should be cooked with the heads on, which adds a sweetness and depth of flavor. Triple J Farms also has started a YouTube page where they demonstrate how to handle their shrimp at home as well as make delicious recipes. They’re also quick to tout that a 4-ounce serving of their shrimp contains just 96 calories, one-half gram of fat and 22 grams of protein.

“Quality wise, they taste to me like the way shrimp used to taste,” James adds. “They’re sweet and tender. The meat itself — if you don’t cook it too long — almost has a lobster texture.” 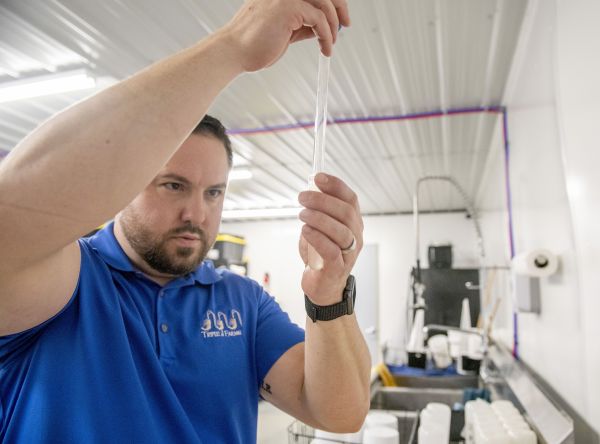 Jeff tests a water sample for nitrates in a lab adjacent to the production tanks.

While farming shrimp certainly differs in some aspects to the row crops, hogs and sheep Dave worked with at their family farm in Defiance, it also might not be as different as you first think.

“When it’s in your nature to produce food, I guess that’s just what you do,” Dave says with a chuckle. “That’s what we’re doing here; just producing a food supply.”