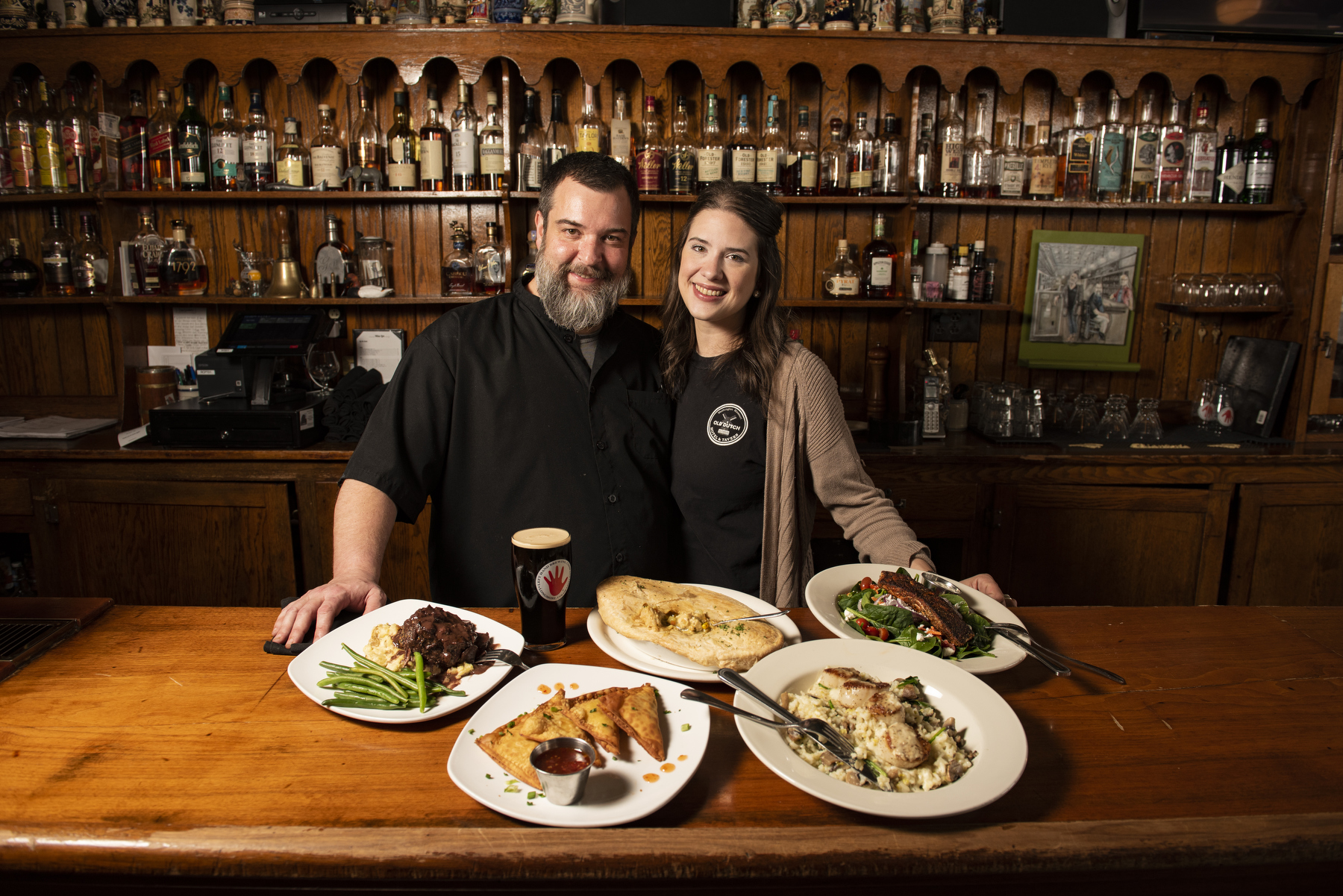 If you ask someone to describe what a tavern is, you’ll probably get a wide variety of replies. A tavern is a place of business where people gather to visit with friends. All serve drinks, and most have the added opportunity to enjoy some food.

Old Dutch Tavern in Washington not only offers great food and plentiful beverages, but they just so happen to be attached to a hotel which shares the “Old Dutch” in the moniker. Anyone who’s lived in the historic riverfront town during the past 90 years probably knows to find Old Dutch Tavern at the corner of 3rd and Elm. The circa 1923 building has an old charm which many businesses seek to replicate. The beautiful high ceilings are lined with original ornate pressed tin tiles. Giant windows at the front allow the sun to fill the eatery with light. Tall shelves line one wall, while a massive oak bar invites patrons to come in and sit a spell, whether for a drink or a meal. For those who prefer modern amenities while dining, flat-screen TVs add a touch of home without being too obtrusive.

While COVID-19 threw a curveball into restaurant indoor dining plans everywhere, Old Dutch Tavern owner Ben Wunderlich and his team still made it work, offering takeout and curbside pickup of the meals patrons crave. But as the owner of a tavern offering more than 70 craft beers, an extensive wine list and some of the best bourbon around (of which Ben is an aficionado), he’s ready for things to get back to normal.

“Let’s get back to having some fun in here,” Ben says, a big smile crossing his face. “For 16 weeks we were just curbside. I missed the people.”

Ben, who has trained with professional chefs around the Midwest, and has brought bits and pieces of his favorite dishes into the tavern menu, loves creating dishes which are flavorful and hearty for patrons to enjoy.

Locals likely know about the delicious eats the Old Dutch Tavern offers, but for those who’ve never been, you’re in for a treat. Ben likes to call it “American comfort food.” Ask him what the menu favorites are and he’s likely to have to think a minute because there are so many requested items on the restaurant menu.

“We do a crab Rangoon we make from scratch that’s our most popular appetizer,” Ben says, noting they crank out about 400 of those per week.

He adds that the chicken wings — which can be ordered in numerous flavors with housemade sauces — are extremely popular, as are the Italian stuffed mushrooms, filled with sausage and oozing with boursin cheese.

Other starter possibilities include a unique calamari and jalapeno mix, a combination which is lightly breaded and flash fried, then served with an addictive sweet-chili dipping sauce; St. Louis-style beef ravioli served with housemade marinara; or a creamy Spinach Artichoke Dip made from a special blend of cheeses and served with fresh tortilla chips.

Salad fans have several hearty options, including the Old Dutch Salad — fresh spinach topped with grilled chicken, Granny Smith apples, gorgonzola cheese, red onions and candied walnuts served with a raspberry vinaigrette dressing. Another favorite is the Blackened Salmon Salad with its fresh bed of spinach and goat cheese, topped with a 6-ounce piece of fresh grilled salmon, red onions, tomatoes and shredded carrots, then served with a lemon-dill dressing. Soup fans will always have new options from which to choose.

“We have probably done over 100 different soups here,” says the chef/owner, “but we usually have chili every day.”

There are plenty of sandwiches on the menu, all of which come with fries, housemade chips, freshly made potato salad, coleslaw or cottage cheese. Additional sides are available for a small upcharge.

Popular sandwich options include the half pound Old Dutch Burger, served with a choice of eight types of cheese on a toasted brioche bun. Add-ons include grilled onions, mushrooms or bacon. The beef (as well as any steaks the eatery offers) comes from the Williams Brothers, a local butcher located only a few blocks away.

If sandwiches aren’t really your style, flip the menu to view the entree selections — which currently displays 15 ample options.

“Our steaks are very popular here along with our grilled pork chop and chicken- and veggie-packed 15-ounce pot pie,” says Ben, adding the menu is changed twice a year to reflect items which are in season.

Steak lovers can choose a 12-ounce New York strip or the popular 8-ounce Old Dutch Filet, which comes topped with a red-wine mushroom sauce. All steaks are served with mashed potatoes and veggie of the day. It would come as a shock to Ben if you can’t practically cut your filet with a fork. Chargrilled shrimp or a luscious mushroom-bourbon demi-glace can be added to your steak order, too.

Those more into surf than turf have a few delectable options which include seafood ravioli — a blend of shrimp, crab and lobster stuffed into ravioli and sauteed in roasted red pepper cream sauce; a seared red snapper, topped with shrimp and andouille sausage in a Cajun tomato sauce and served over rice or the popular Lemon Dill Scallops, scallops pan seared and served over a housemade mushroom and spinach risotto and finished with a lemon-dill sauce. “We use U-10 nice, plump scallops and pan sear them,” Ben says, noting the U-10 means less than 10 scallops comprise a pound.

Other entrees include a homestyle meatloaf topped with mushroom-bourbon sauce; Chicken Nora, a chicken breast topped with melted Gouda, sauteed spinach, a beurre blanc sauce and crispy Prosciutto and served over couscous with the vegetable of the day.

Kids 12 and younger have their own menu options of a quarter-pound cheeseburger, grilled cheese sandwich, penne pasta with homemade marinara sauce or the universal kid-approved menu favorite, chicken strips. 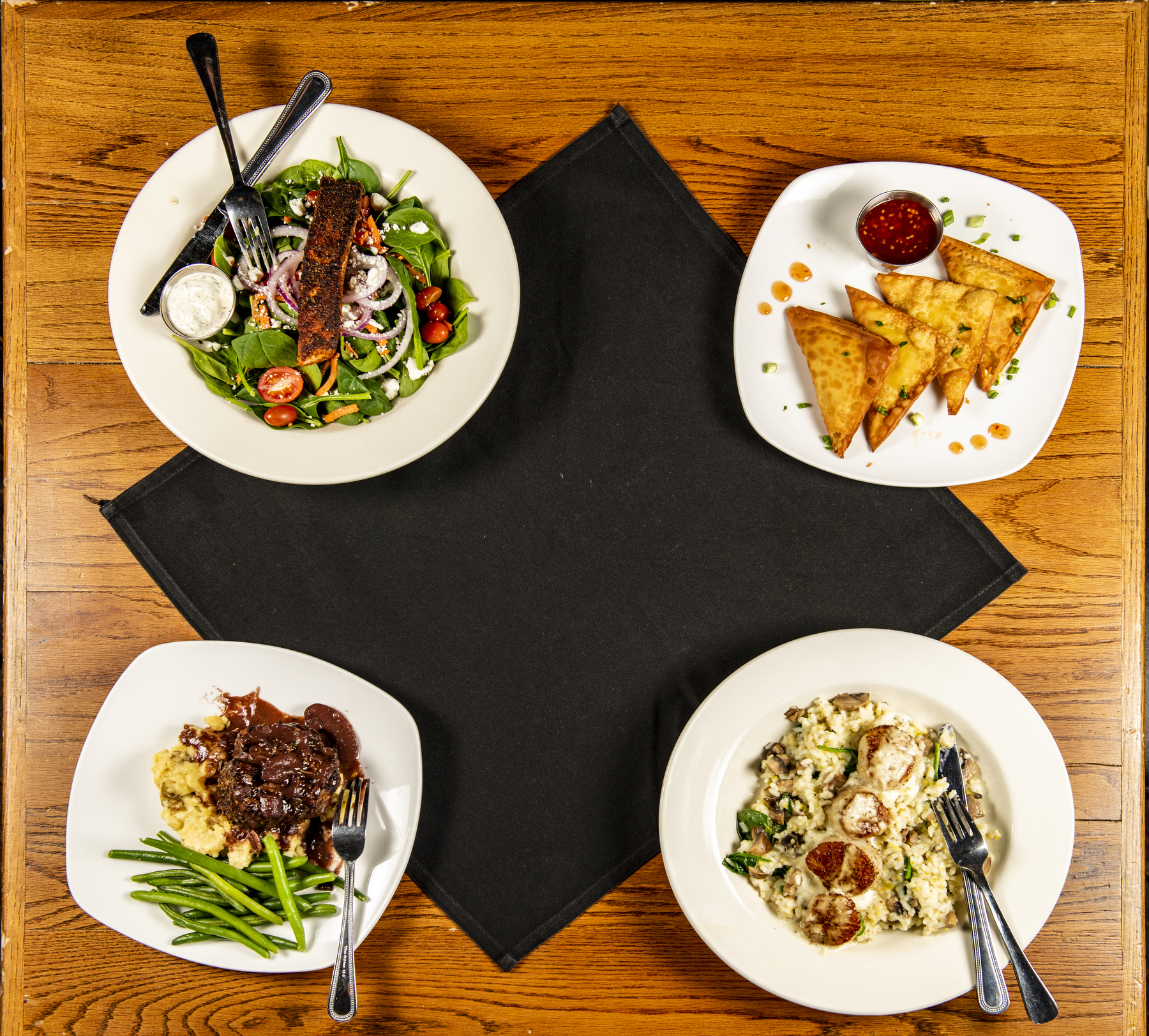 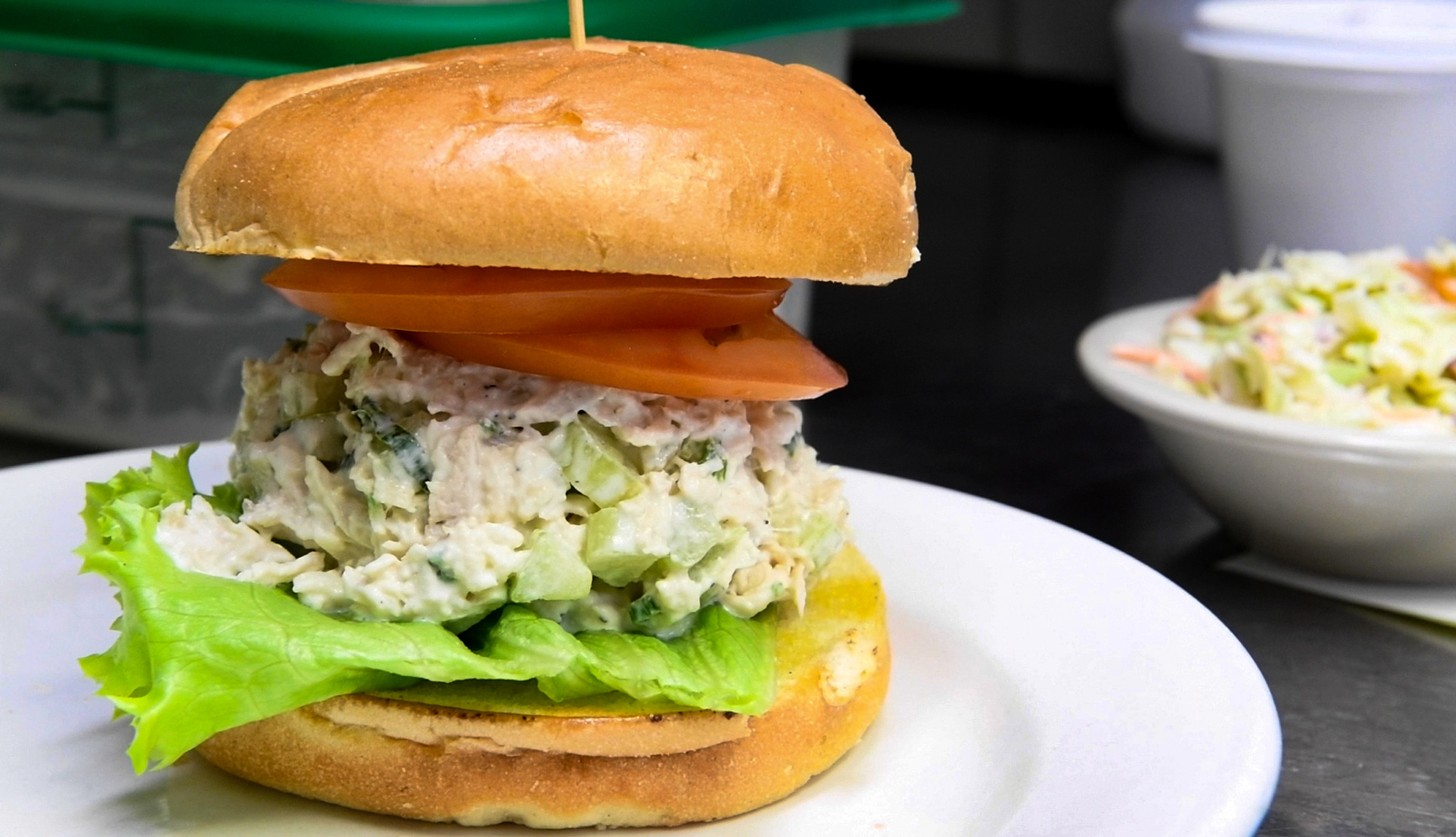 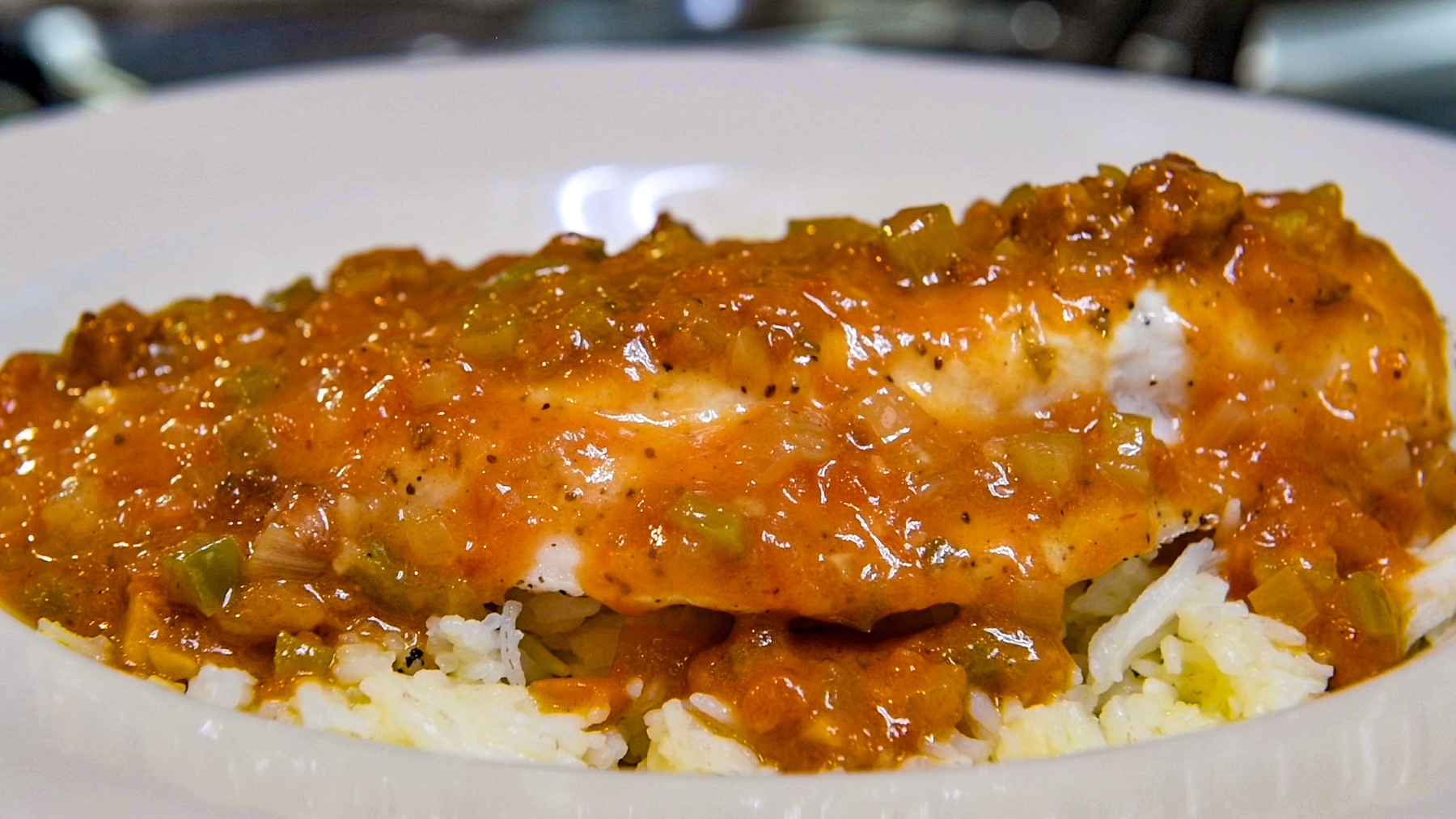 Top dinner off with desserts which are all made in-house, including chocolate chip pecan pie (order a cup of coffee with this one) or one of Old Dutch Tavern’s featured bread puddings. “We’ve probably done 60-plus types of bread pudding. Those range from caramel apple to smores to pumpkin pecan. The list is endless,” Ben says. “I’m more of an apple and walnut bread pudding guy myself.”

Ben recommends groups of eight or more call so the restaurant can reserve space for larger groups.

The owner says the tavern draws a lot of people who drive 45 minutes or so from the likes of Wildwood, New Haven, Hermann or even downtown St. Louis to grab a meal, particularly on weekends. The hotel above them is owned by Ben’s parents and offers spacious rooms for travelers wanting to make a weekend of their outing. With only 14 rooms — and the downtown location near many of the local churches — the hotel is becoming a popular spot for wedding parties to stay when in town for the festivities. According to Ben, one corner room played host to President Harry S. Truman, who was a friend of the former owners back in the day.

Ben is passionate about the town and excited for people to begin gathering together again.

“Come out to Old Dutch Tavern and join us for some wonderful food and spirits,” Ben says, adding, “but if you overindulge, stay at the hotel. We’re worth the drive.”

Details: Open Monday through Saturday from 11 a.m. to 9 p.m.; closed Sunday. No smoking. Free Wi-Fi upon request. Cash and credit cards accepted. Located at 227 Elm St. in Washington. Amtrak’s Missouri River Runner train stops nearby for those who would like to ride the train to town. Call Old Dutch Tavern at 636-390-4400 or online at www.olddutchhotelandtavern.com or on Facebook.