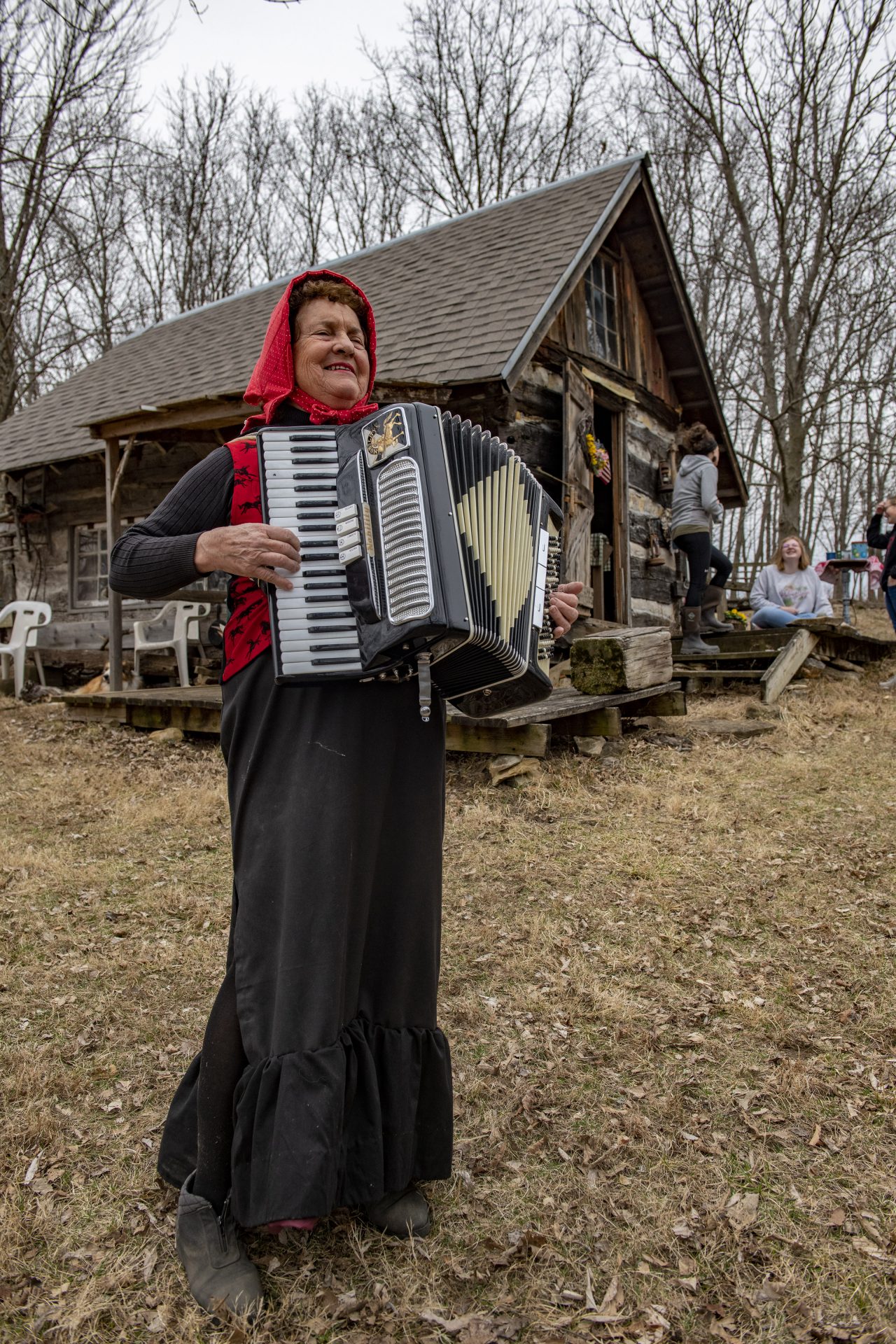 When Benjamin Fry built his log cabin south of the town that would one day become Plattsburg, northwest Missouri looked a little different. In 1829, the cabin was on Missouri’s frontier. The Platte Purchase had not been made, Kansas City was not incorporated as a town and Smithville Lake was more than a century away from existing. But today Fry’s cabin looks much the same as it did almost 200 years ago, thanks to a retired music teacher who couldn’t let a piece of history be forgotten.

The cabin, which in 1991 was part of a barn across the road from where Bev and her late husband, Ron, lived, was due to be dismantled. “I thought maybe I’d try to save it, but the only thing I’d ever built was a doghouse,” recalls Bev, a Platte-Clay Electric Cooperative member.

Saving Fry’s cabin took Bev a little more effort than tacking together Fido’s abode. Pressed for time, she paid the cabin’s owner $100, and with the help of friends, family, neighbors, some chains and a pickup, Bev transported the cabin one log and foundation rock at a time to their farm. For the next three years, on a hillside in the woods, Fry’s cabin — now known as McCulloch’s Deer Creek Cabin — was rebuilt.

“For the longest time we were just trying to get it up,” Bev says. “The flood of ’93 hit and you couldn’t get a tractor or a truck in here. But everybody was safe and nobody got hurt. That was my goal.”

Bev had the foresight to label the logs before dismantling the structure. Wrangling the 200-year-old oak and walnut timbers, some weighing as much as a half a ton, took some ingenuity: With an iron bar and rocks, Bev managed to raise them on to a ramp built from other trees on the property, and hoisted each piece into position using a tractor and cable. She added windows to the west wall, and learned to chink the spaces between the logs using a mix of water and homemade plaster. With no way to raise the last three logs high enough, Bev stopped at the sixth level and built a loft and roof.

“I learned a lot of skills. When you do your rafters you have to cut what’s called a ‘bird’s mouth’ — just a 90-degree chunk — out of it, then it will lay flat on the plate.” She points out a conspicuously newer looking piece of the roof. “The ridge crown was the hardest thing because I had to splice it and had to lift it with help.” 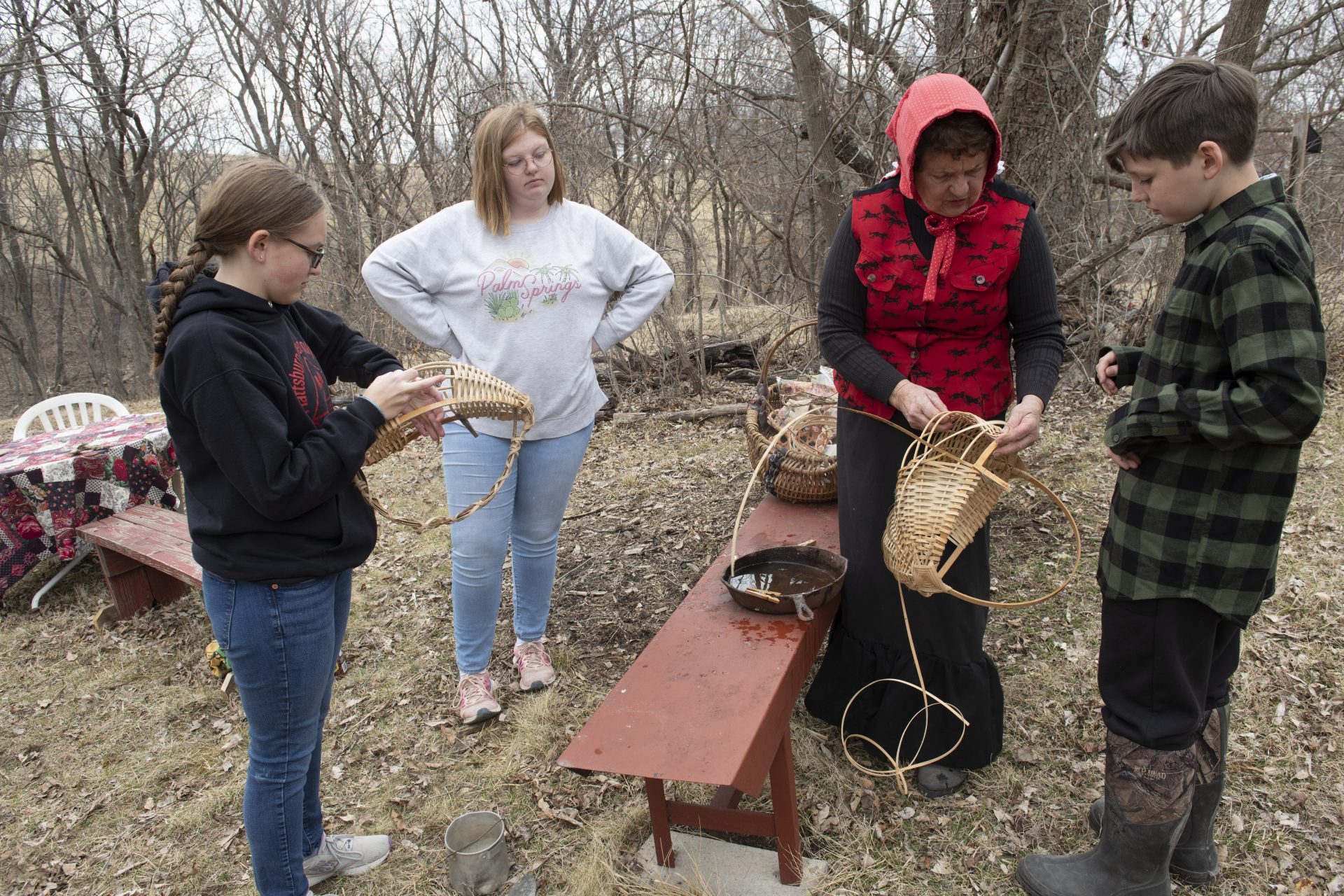 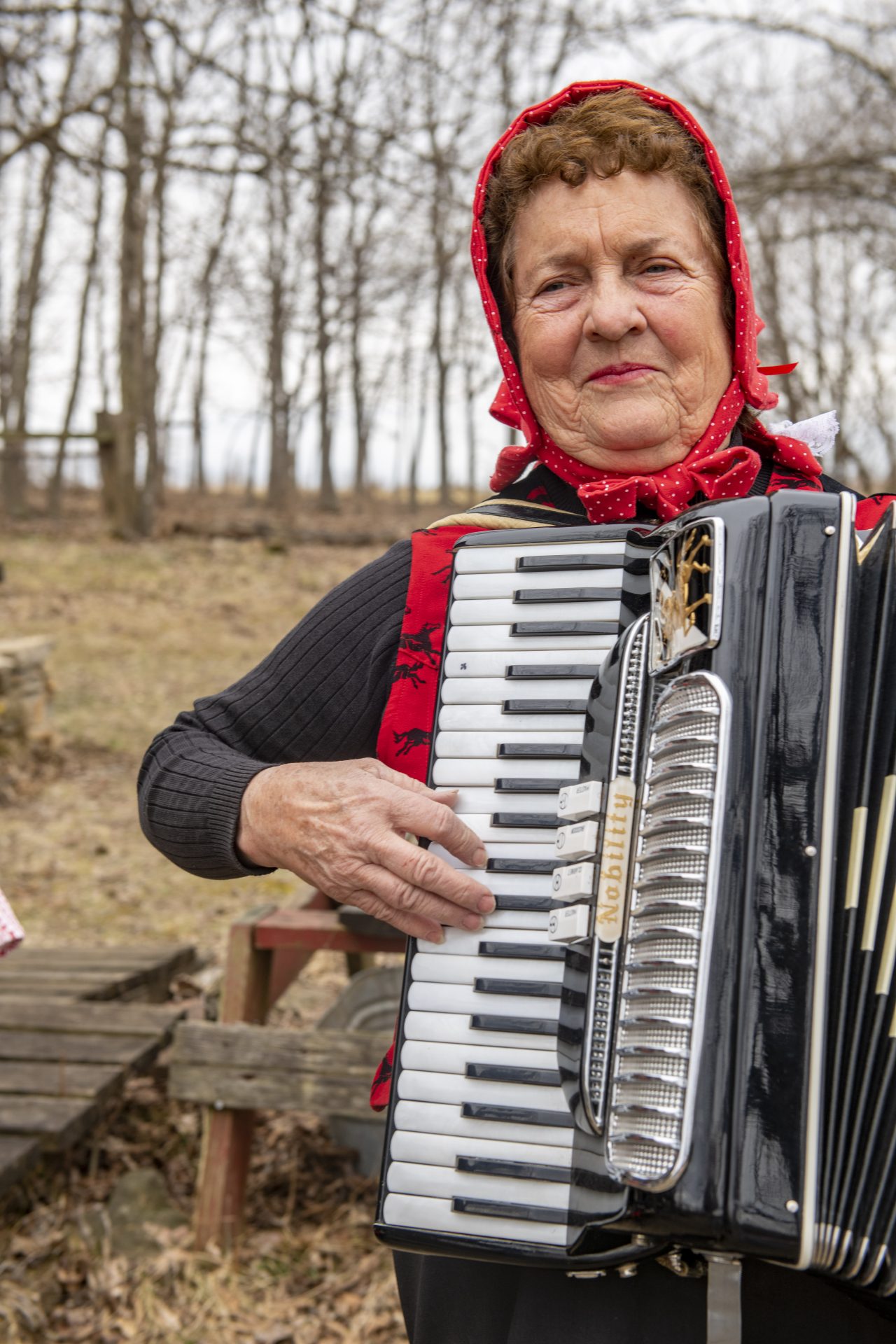 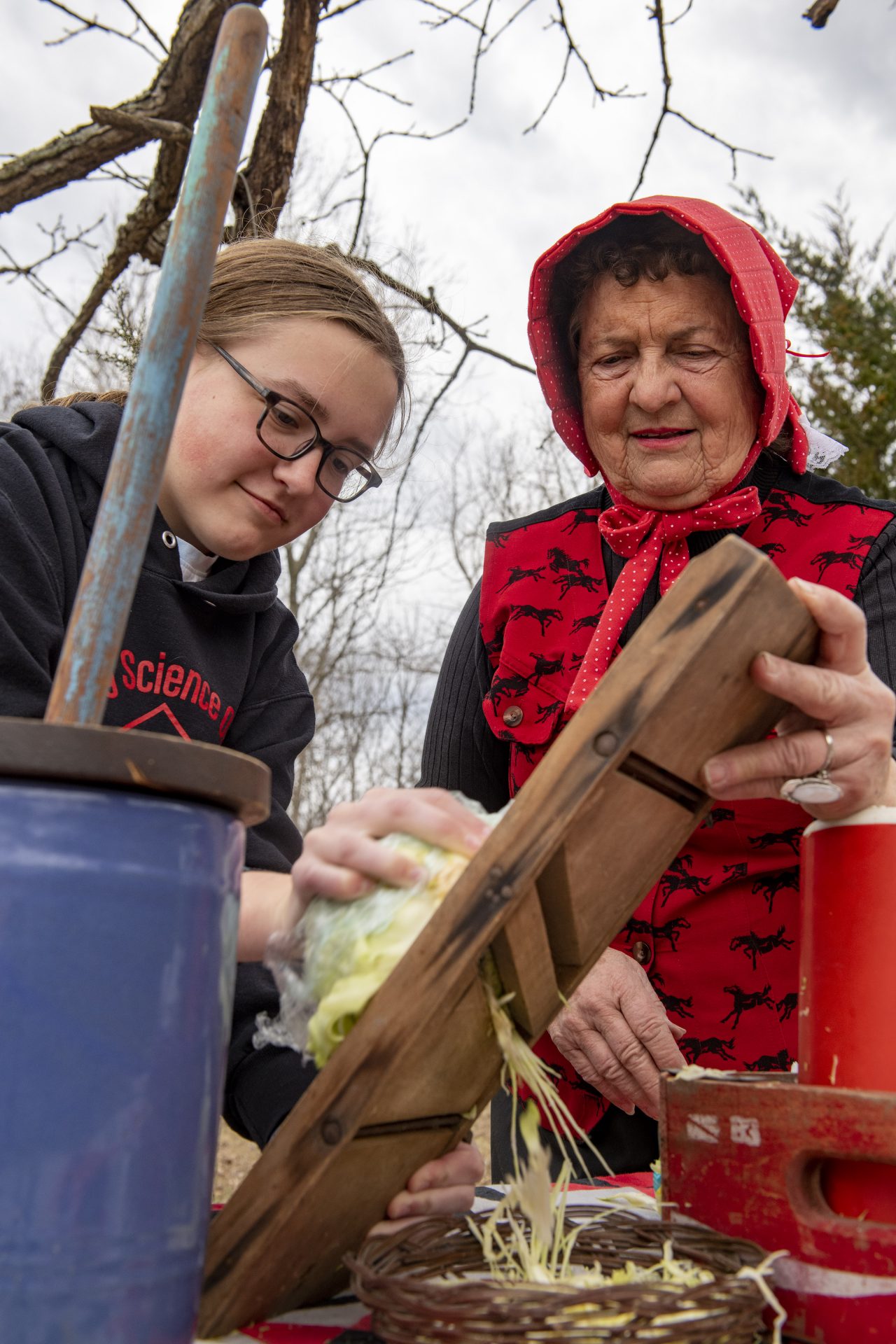 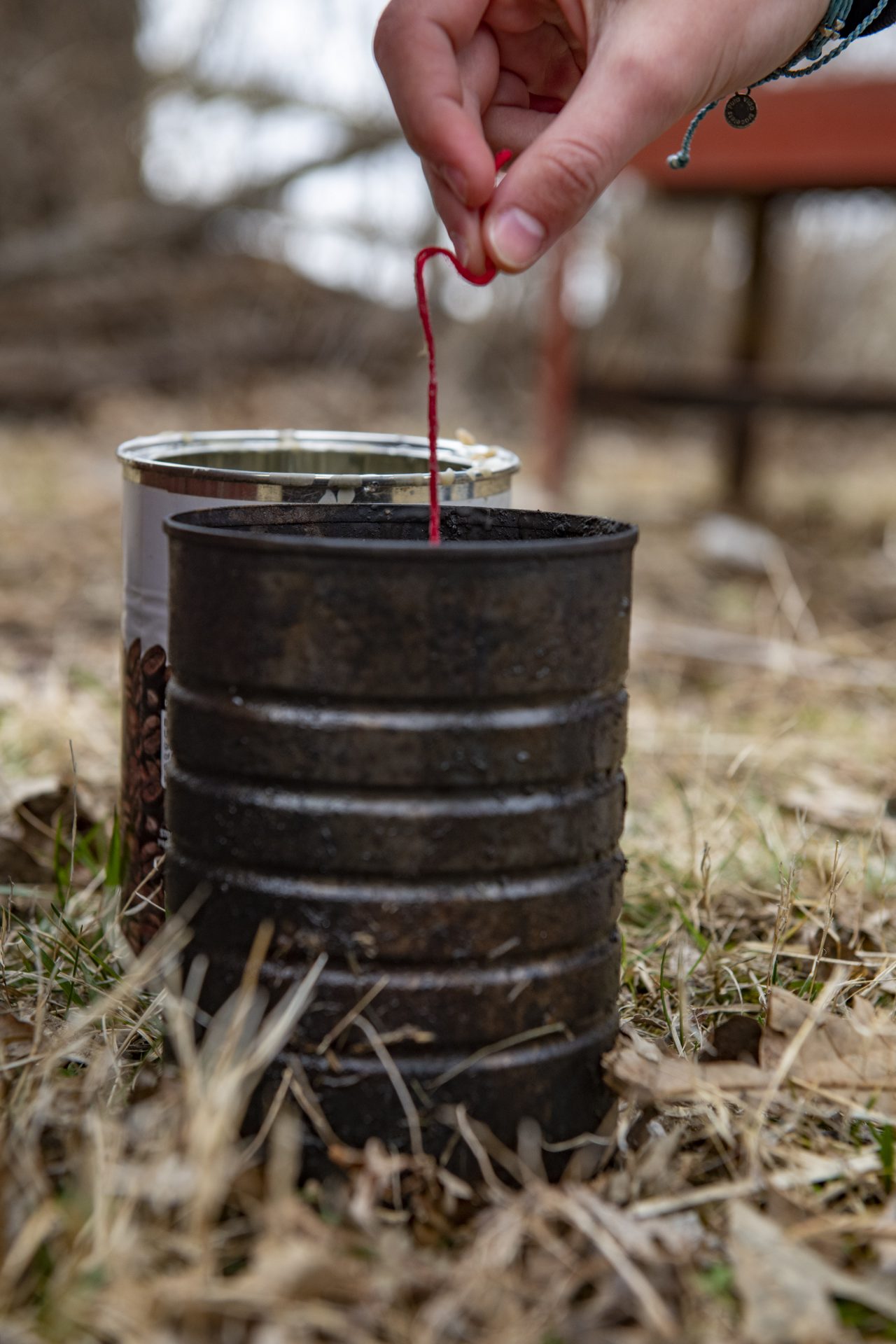 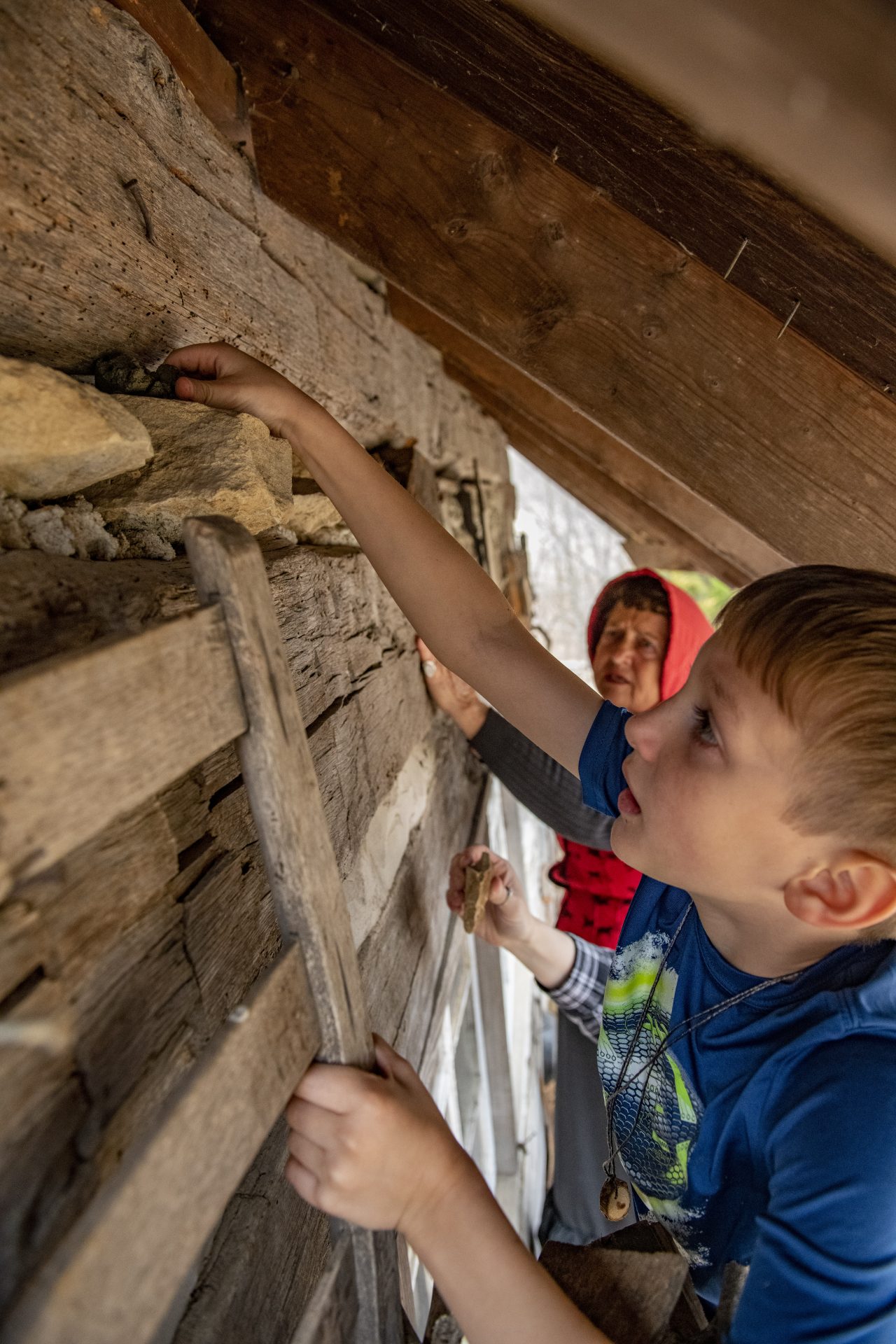 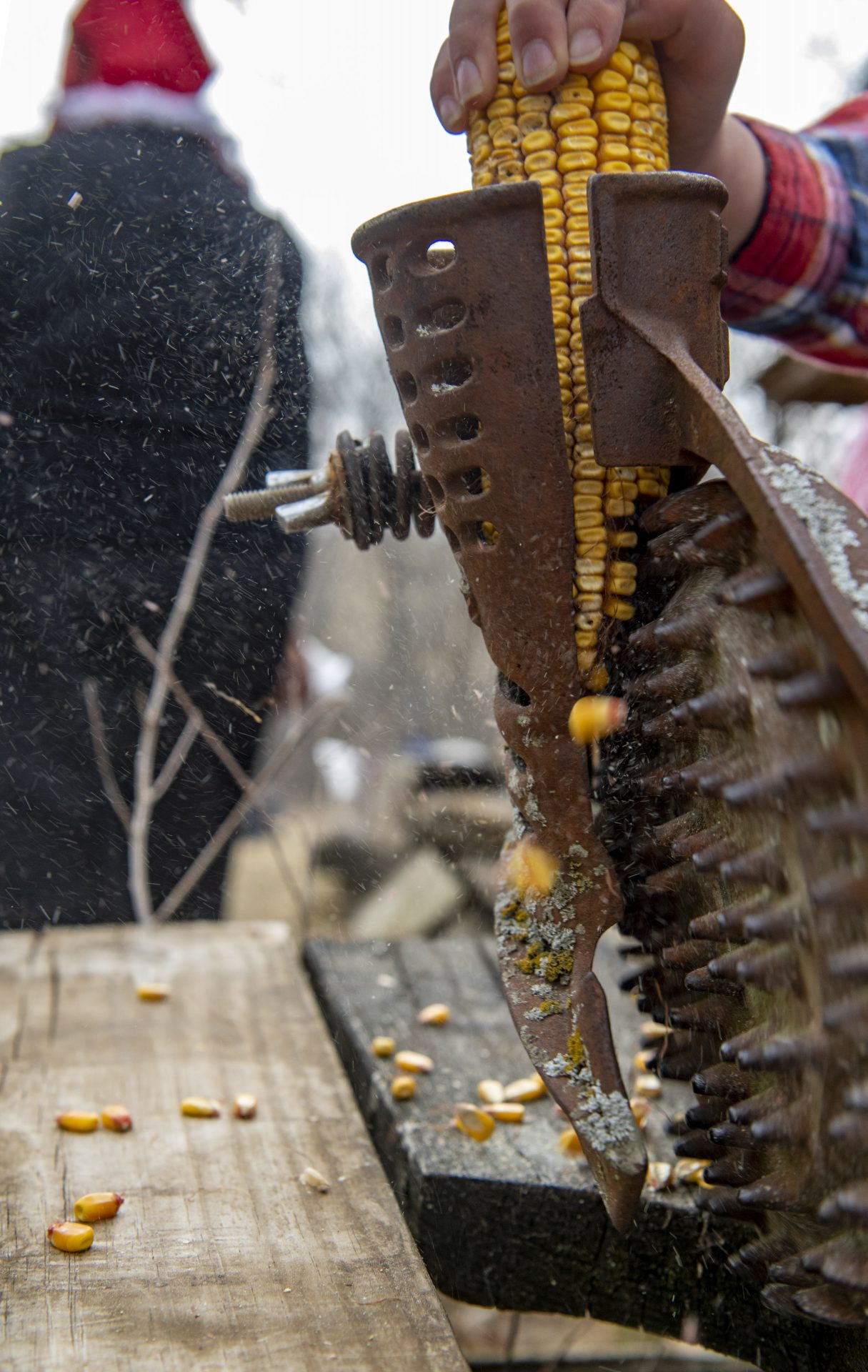 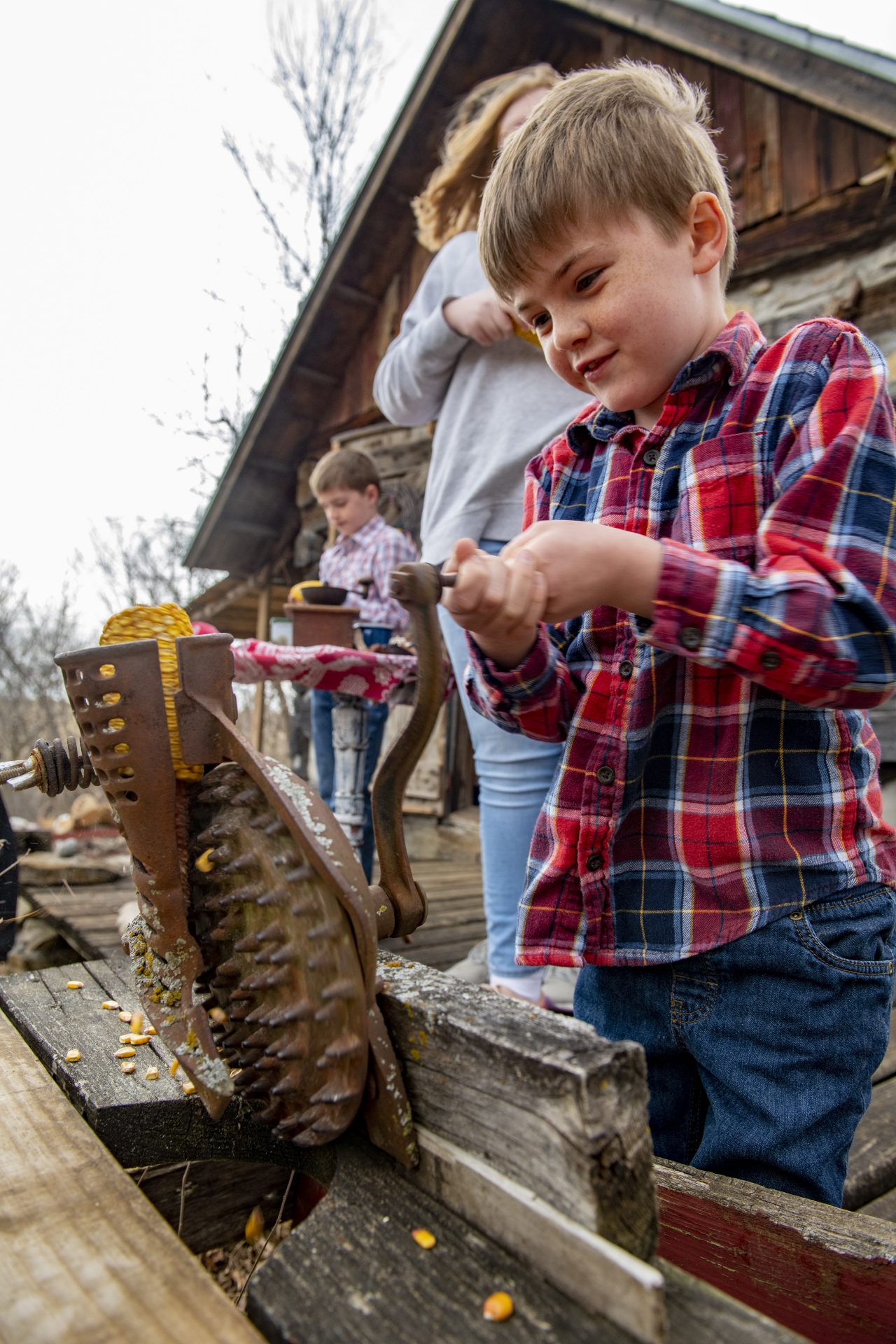 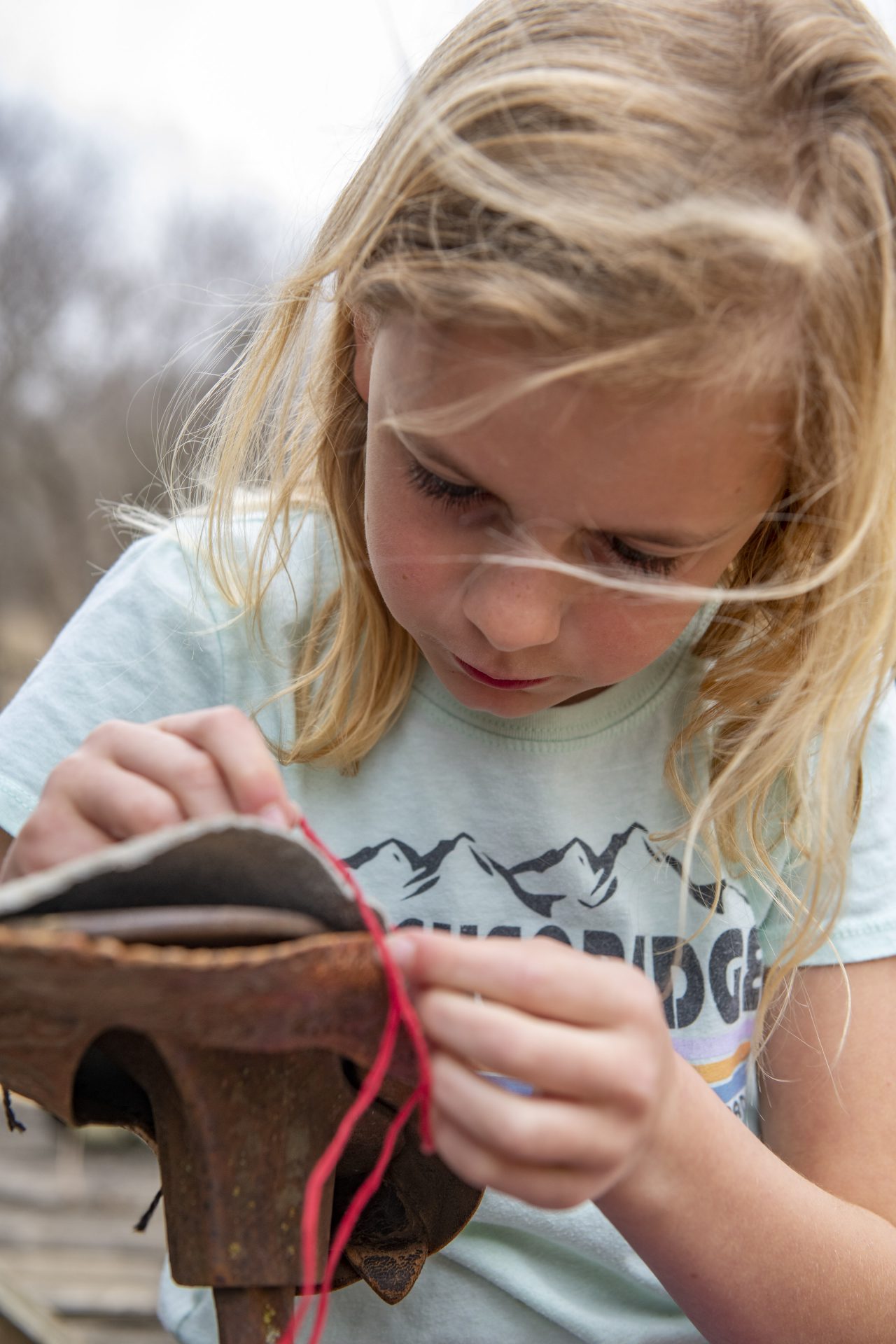 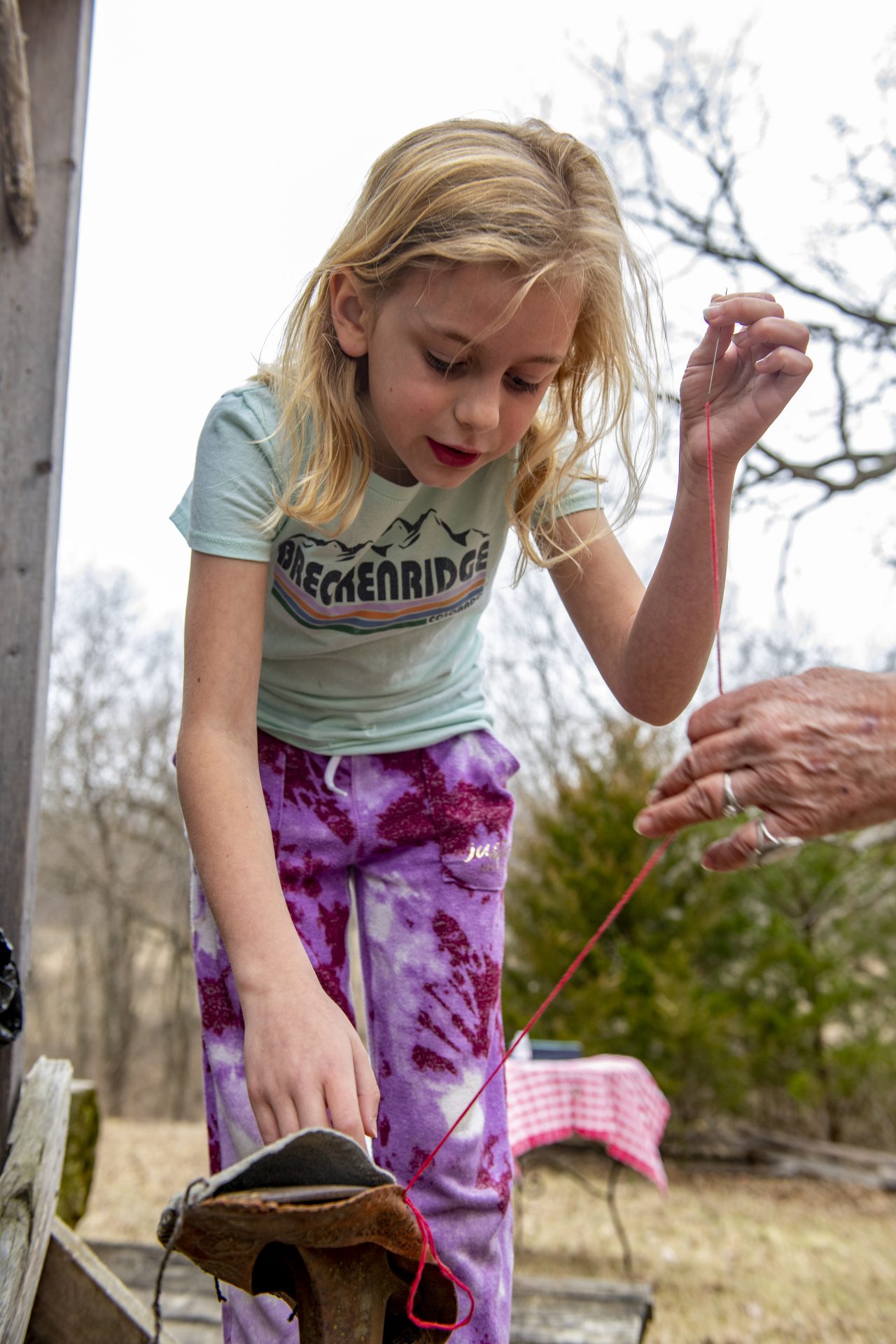 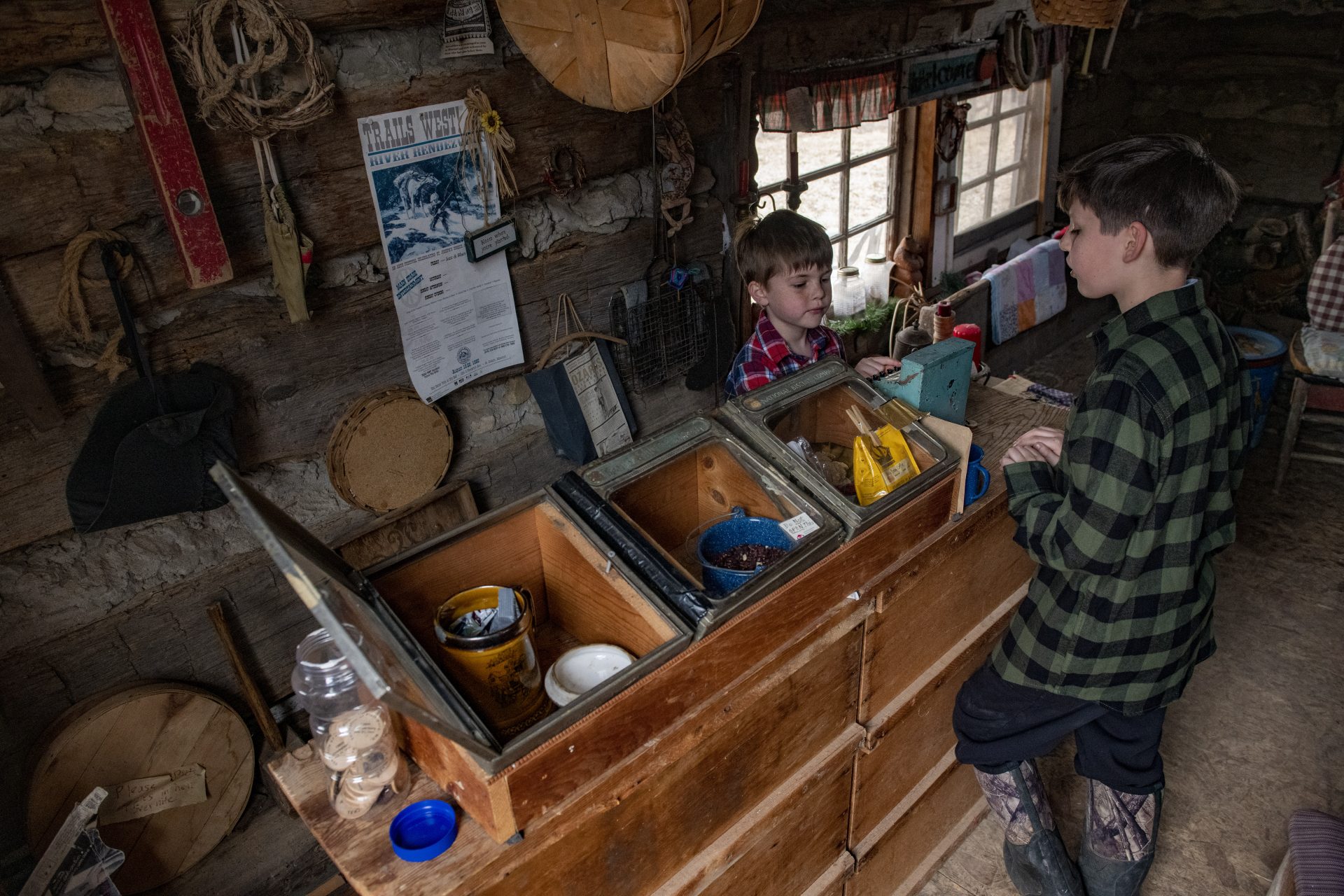 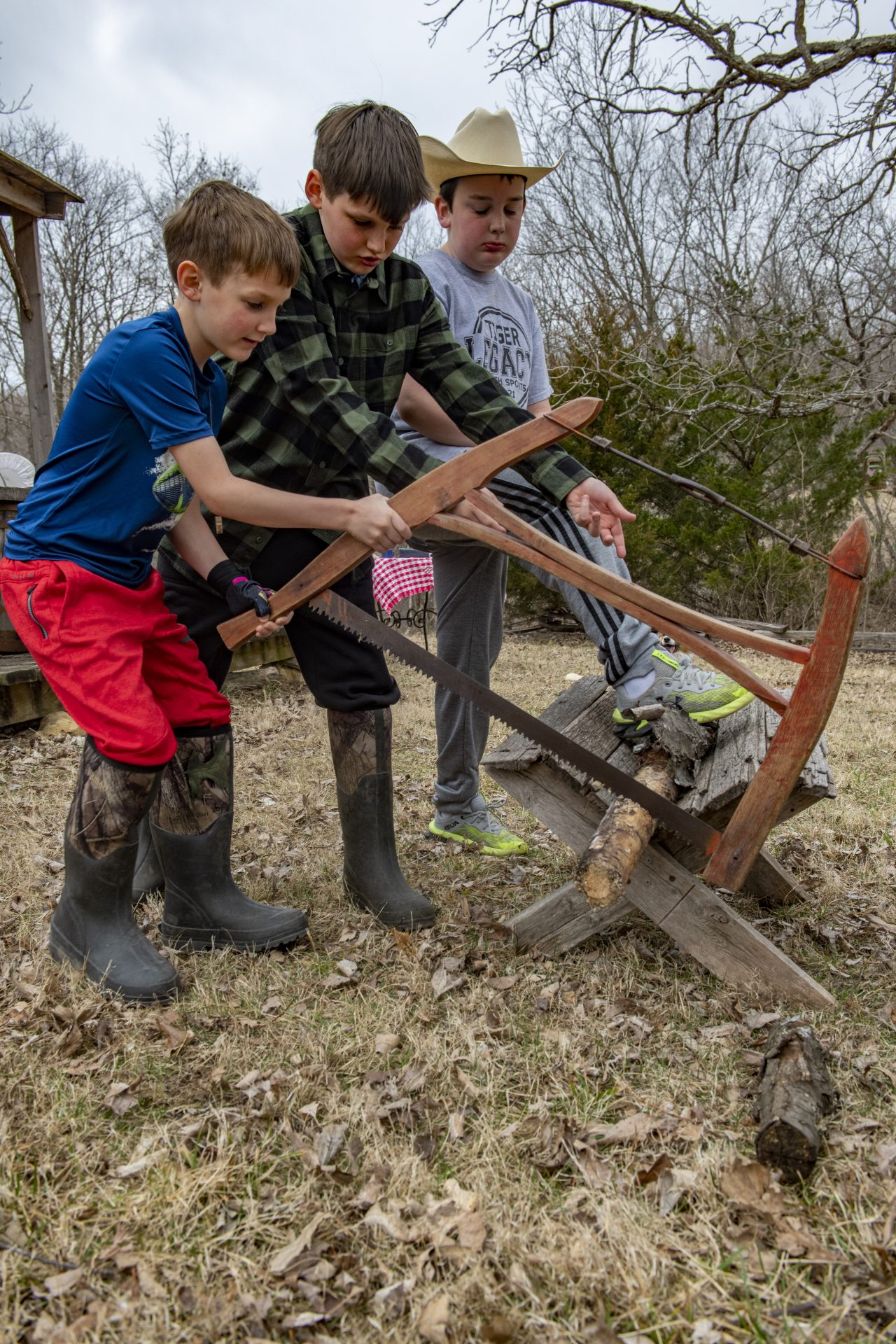 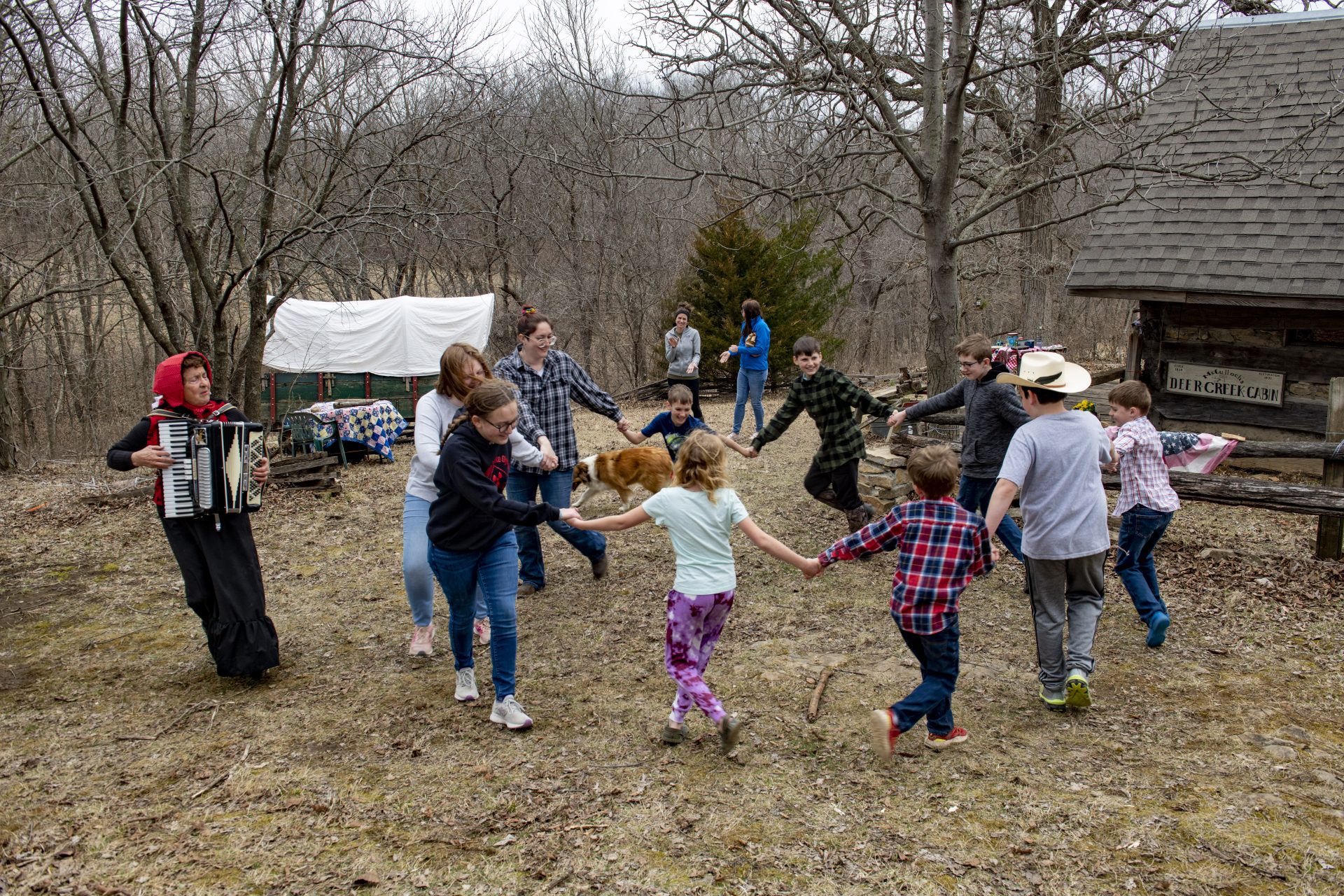 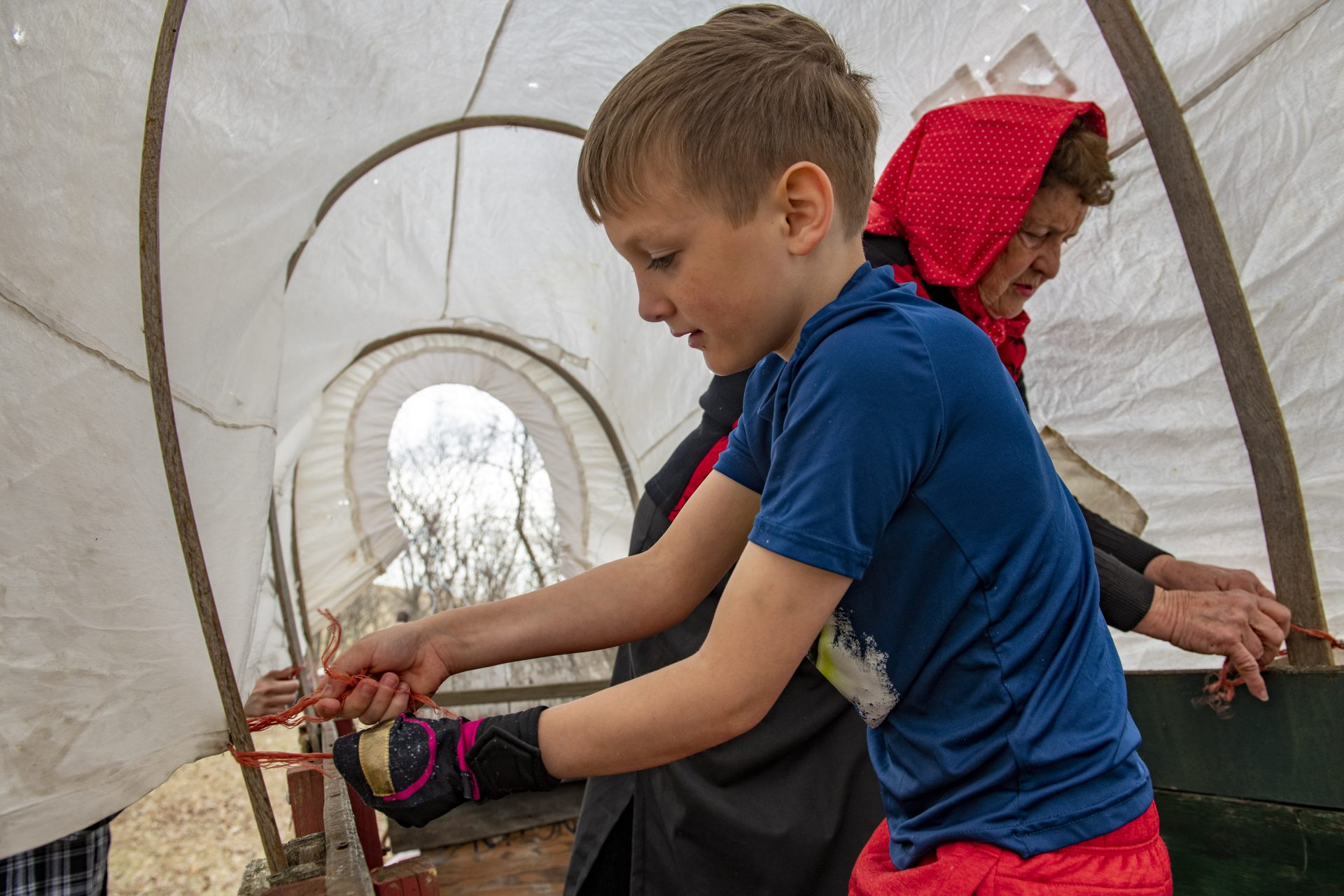 A few trips to the library and a couple of 2-by-6s later, and the pioneer cabin was finished in 1994. Bev says she originally intended to rent the cabin to hunters, but the process of rebuilding the structure had introduced her to a host of skills and history the retired educator felt compelled to pass on to others.

The cabin, dressed in star-spangled bunting and adorned with quilts, a wood-burning stove and relics from the Fry family, became the centerpiece of Bev’s own school of pioneer skills. Visitors of all ages receive hands-on instruction in butter churning, basket weaving, candle dipping, corn and coffee grinding, leatherworking, cabin chinking and more. Tools of the day — an old buck saw and sawbuck, a cabbage cutter and even the adz Fry himself may have used to hew the cabin’s log walls — lend authenticity to the model homestead. Visitors also help mind the cabin’s general store where candy and trinkets can be bought for a wooden nickel.  Over the past 28 years, more than 3,000 visitors and even a few country weddings have graced Deer Creek Cabin.

“I was afraid all that history was being lost,” Bev says. “I felt like it was worth saving.”

Bev had more than simply a passing affinity for an old cabin. During a 2012 visit to Williamsburg, West Virginia, she saw the restored remains of McCoy’s Fort. Built by her sixth great-grandfather, William McCoy, in 1769, the fortified frontier dwelling saw some action during the Revolutionary War. Like Fry’s cabin, it was sheltered inside of a barn until being dismantled for reconstruction and preservation in 2013. Bev pays tribute to that lineage at Deer Creek with a model of a covered wagon using bows that were built by second great-grandfather, John P. McCoy. She also caught a unique form of cabin fever and built her own cabin on another hill, this time using the “Foxfire” books to guide her.

A day at the cabin ends with a celebration. Calling the kids together as she no doubt did with students thousands of times in the Plattsburg, Smithville and St. Joseph school districts, Bev lines up her students for a final lesson. She straps on her accordion and walks the kids through a square dance to the traditional folk tune, “Old Brass Wagon.” Music and laughter rise with the campfire smoke on the air, and for just a moment, history has come to back to life.