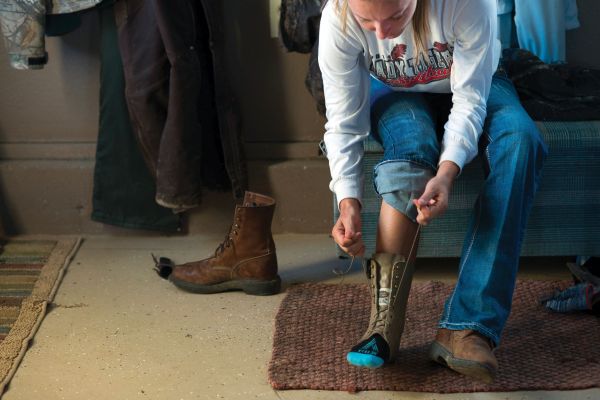 Carey Portell laces the leather ankle supports she needs to work on the farm.

Wednesday, Dec. 29, 2010, 6 p.m. It’s cold, dark and foggy. Carey Portell and her daughters are heading down Route ZZ from their St. James farm to a Zumba class Carey is teaching in Cuba. 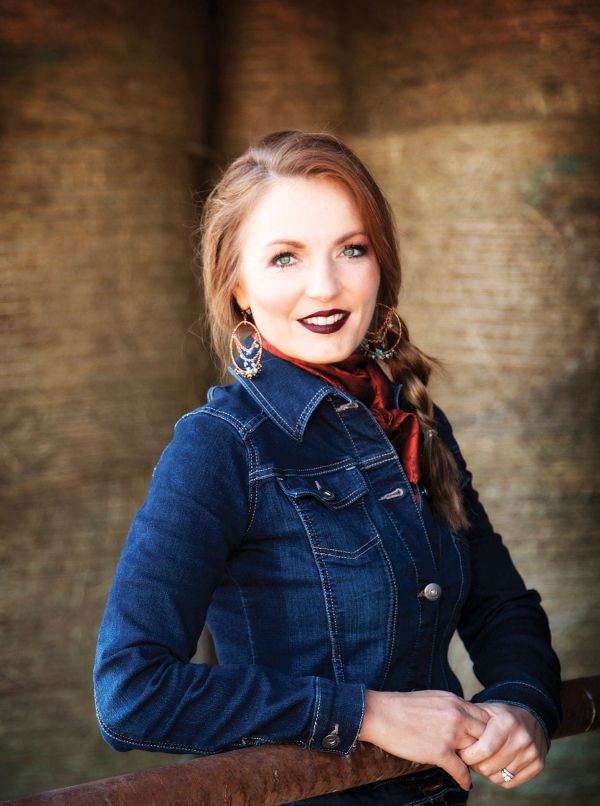 6:18 p.m. Carey laughs with her daughters. Suddenly, she realizes the truck that just popped over the hill ahead of them is weaving back and forth. It bounces off the truck and fl atbed trailer just ahead, then heads right for them.

6:20 p.m. Headlights shine through the windshield like a full moon. The night is fi lled with sounds of metal upon metal and glass sharply shattering as the drunk driver hits the Portell’s Ford Taurus head-on. Air bags explode. The world skids to a stop for a moment before panic ensues.

The drunk driver hit them going more than 80 miles per hour.

“I remember thinking a moment ‘This is going to happen,’ then I blacked out on impact,” Carey says.

Daughters Olivia,12, and Mackenzie, 10, both had injuries, but were alert and can recall the event from start to finish. 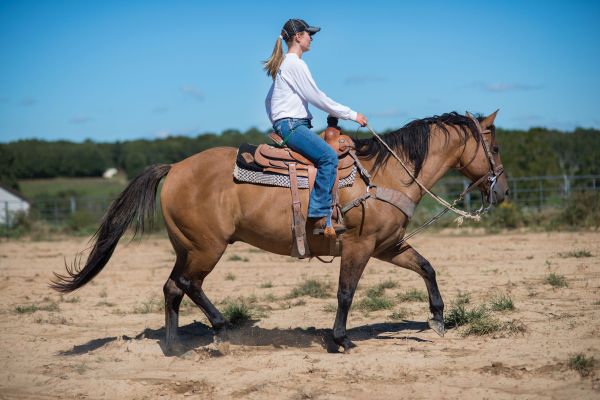 The survivor says she’s had to rethink how to do nearly everything since the crash caused by a drunk driver. Even riding a horse now includes tying herself into the saddle for more security

“I remember waking up to the girls yelling at me to ‘wake up,’ and then I was like ‘Oh yeah, that really happened,’ ” says Carey. “Somehow I was alert enough to ask someone to call 911 and have one of the girls call their dad.”

Soon Carey’s husband, Greg, and her father arrived on the scene. Greg went to local hospitals with the girls, but Carey was in worse condition. It took fi refi ghters more than an hour to extricate her from the vehicle. Due to the fog, Carey couldn’t be fl own to the hospital, so she had to endure an hour-long ambulance ride to St. Louis. The drunk driver didn’t survive.

Two days later Carey began to ask what had happened. She couldn’t recall that four vehicles had been involved. Slowly, Carey pieced things together.

“When he hit us, everything in front of me ended up in my lap. I remember wondering why I couldn’t move my legs when I woke up,” says the Crawford Electric Cooperative member. “He’d hit the car so hard the fl oorboard had buckled under my feet, breaking my ankles and pelvis.”

Legs pinned, Carey recalls trying to pull free but immediately passing out from the pain. “Thank goodness I couldn’t because one of my legs was barely connected.”

Carey was an X-ray technician, photographer and exercise instructor before the crash. After 10 days in the hospital, she’d had two surgeries: one repairing her pelvis and another fusing both ankles with bone grafts from her hips, setting them at a permanent 90-degree angle.

Carey says she learned the hard way how many steps were her maximum for each day.

“I’d be at the store and realize I was going to need to sit down in the aisle until my legs could keep moving,” says the 44-year-old. “Sometimes I’d get the mail and need to sit down in the driveway. Each time I looked at my step counter, it would be around 3,000 steps. So that’s pretty much my max. If one of the kids has a game or we want to go out, I have to save my steps for that day or I’m down for the count.”

With the help of Greg and their four children — Olivia, MacKenzie, Hayley and Drew — Carey can do about anything she sets her mind to. Sometimes though, she has to rethink how to do something. To help, she attended a University of Missouri Extension AgriAbility program to learn to approach farm chores differently, and added a Border Collie named Cooper.

The family pitched in as she learned how to drive the tractor again, move the big, round hay bales and rotate the cattle to new pasture.

While their children can talk about the life-changing event, Carey’s husband chooses not to look back. “He did one interview with a television station and afterward told me how he couldn’t do that again,” she says.

Today, more than eight years later, Carey talks to groups about the accident and how she and her family survived it together.

“I speak to schools, business and church groups and tailor the talk to the crowd,” says the inspiring woman who averages 50 events per year.

“On the days when I’m exhausted and waiting for my legs to catch up with me, I look around and count my blessings,” says Carey. “Life happens to all of us, but it’s your choice how you react to it. Whatever you’re going through, you can get through it. Just have faith.”