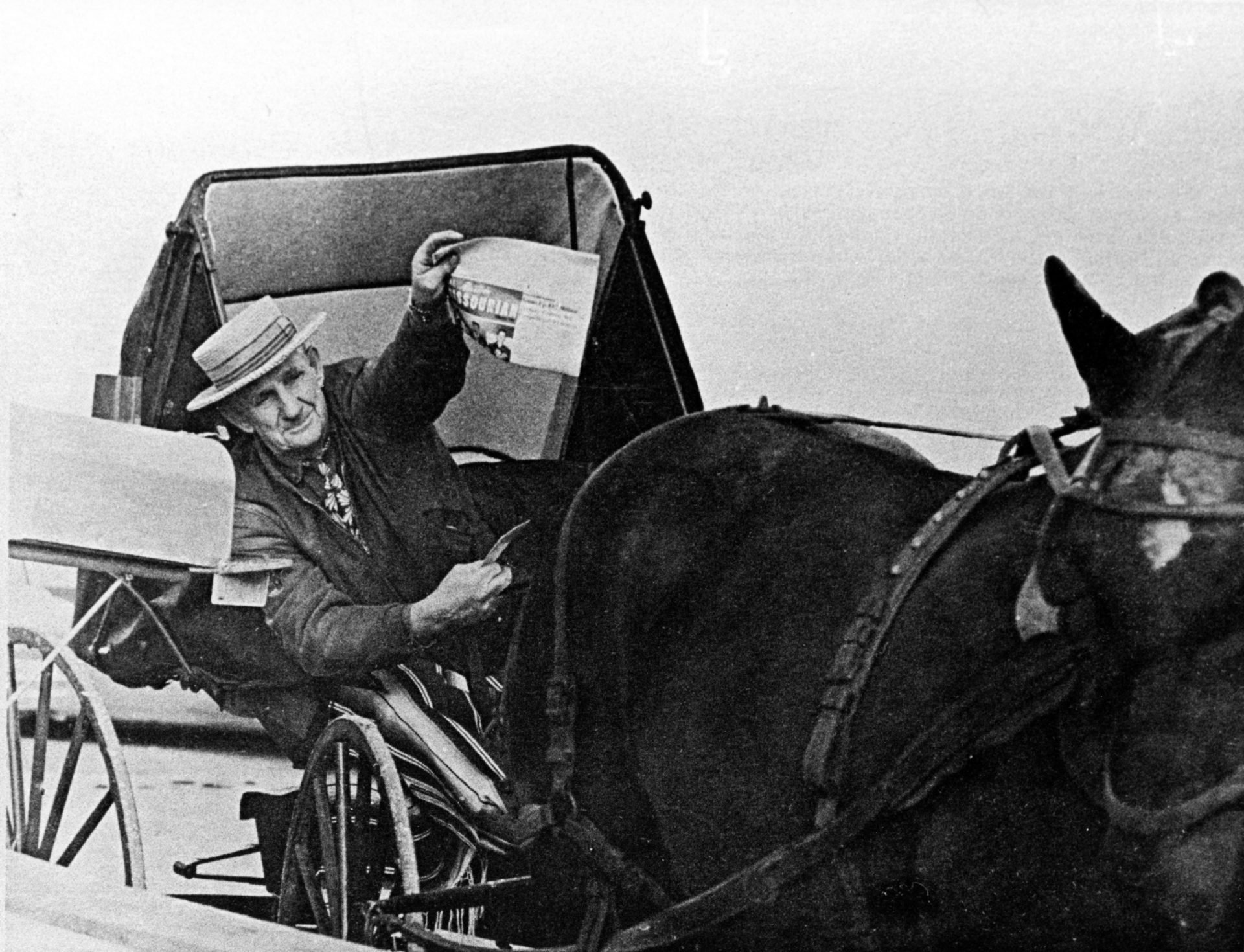 A look back at 75 years o Rural Missouri

On a frosty day in December 1947, the presses at the Drover’s Journal in Kansas City cranked up and didn’t stop until more than 100,000 copies of the first Rural Electric Missourian were printed and headed to mailboxes across the state. It marked a new era in communications between Missouri’s electric cooperatives and their member-owners.

Flash-forward 75 years and the presses will again roll just up the road at LSC Communications in Liberty, where this issue of what is now called Rural Missouri will go into production. This time more than 583,000 copies will come off the presses with color photos and everything printed on glossy stock. At the same time our website and digital edition will go live.

We’ve come a long way over the years, but the mission envisioned by those first editors will go on for future generations. We continue to champion rural living, rural people and the electric co-ops they own. 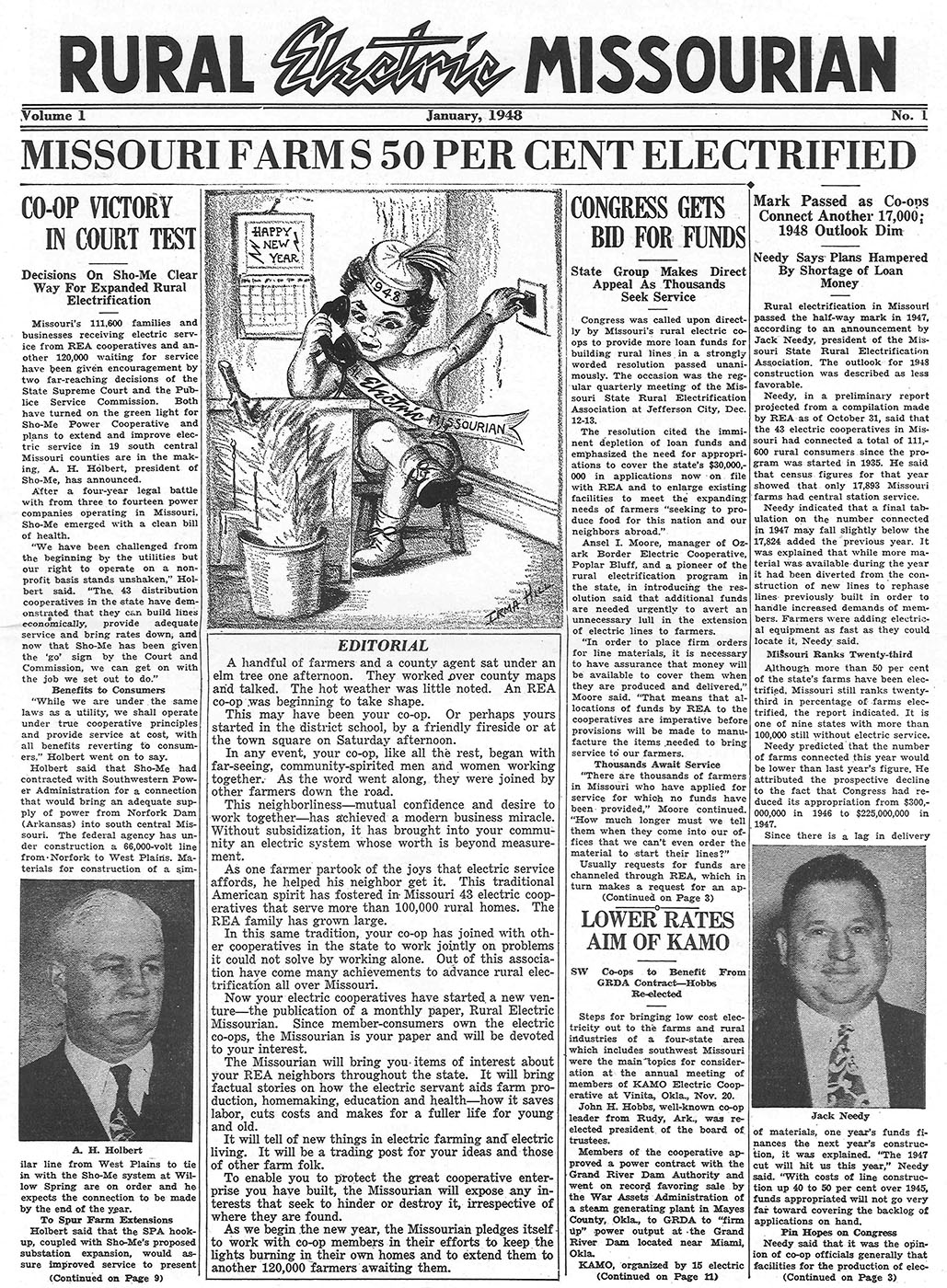 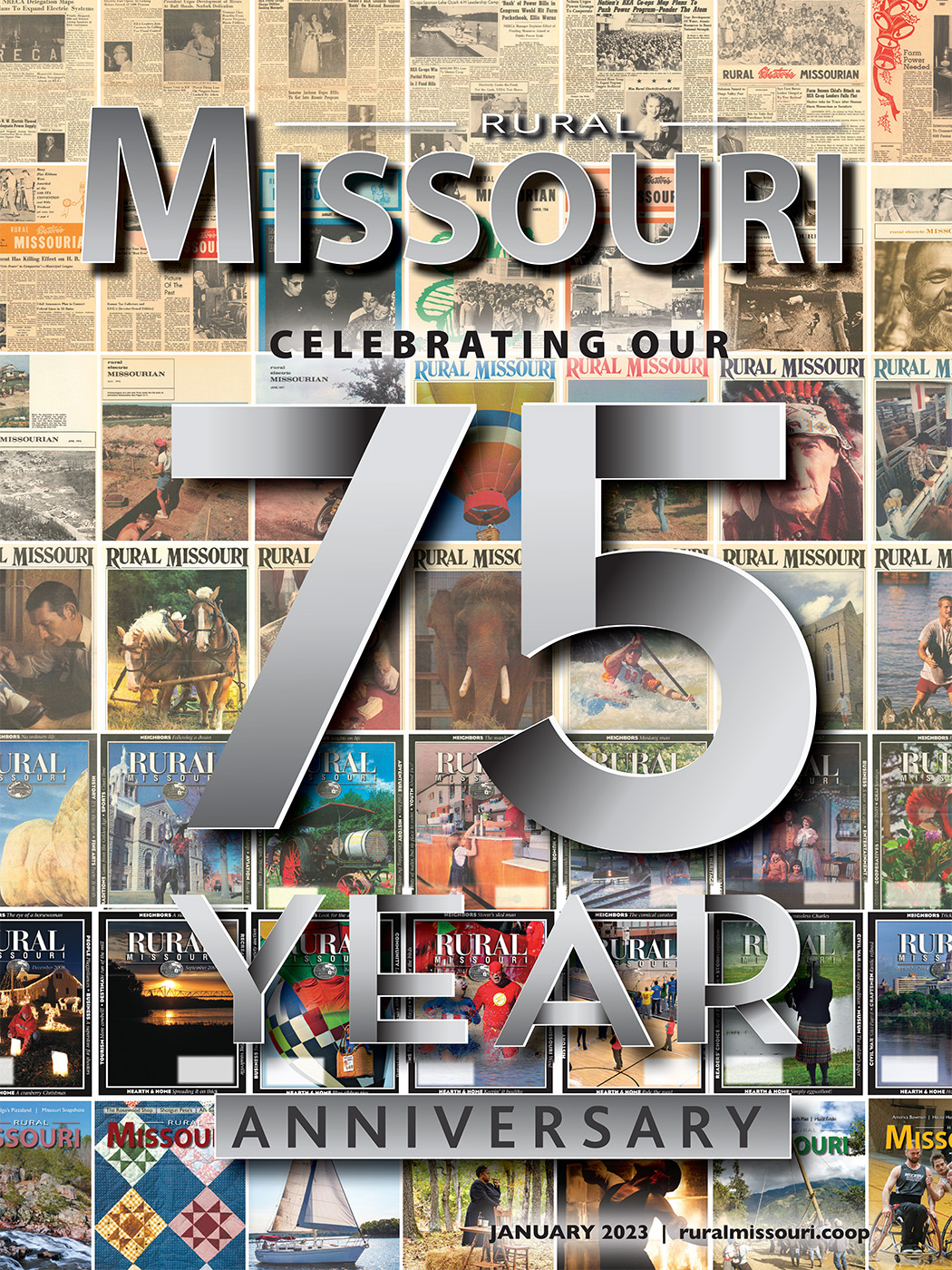 And thanks to the cooperative concept that everything is cheaper by the dozen — or hundreds of thousands — electric cooperatives can communicate with members through the local pages of Rural Missouri for significantly less than the price of a postage stamp.

Talk of establishing a publication for Missouri’s electric cooperatives began in 1945, when Boone Electric Manager L.L. Anderson pitched the idea after seeing similar publications in Wisconsin and Illinois. His efforts would not bear fruit for three more years because wartime shortages of paper postponed its launch.

At that time the association that produced the Rural Electric Missourian was just a committee of managers and directors. But long before the presses rolled the association hired Homer Hill as the first editor. Ironically, Homer would create the first few years of a publication directed at rural people from his urban home in St. Louis.

Along with Homer came his wife, Irma, a talented artist whose editorial cartoons would blast any individual or organization that stood in the way of bringing electricity to those still in the dark — which amounted to half of the farms in Missouri. That was in keeping with the early mission of fighting back against the private power companies that were buying space in national magazines and newspapers to discredit the fledgling electric cooperatives.

When the first electric co-op lines were energized, rural people used just enough electricity to light a few bulbs. But an ambitious power-use program taught members that electricity could power much more, including heating homes, cooking meals and operating farm equipment. Before long the need for more electricity had electric cooperatives working to build their own power plants.

That was not OK with those utilities that earlier had refused to extend their power lines into rural areas. Their anti-electric co-op message tried to brand the co-ops as socialist organizations that would bring about the downfall of the entire nation.

There’s an old saying that you don’t go to war with someone who buys their ink by the barrel. From the start, Missouri’s electric cooperatives bought their ink by the trainload as its foes would soon discover.

Through the pages of the Rural Electric Missourian the co-ops launched their own broadsides touting the benefits of farm electrification from a utility built and owned by the end users. One editorial lambasted Reader’s Digest, a frequent enemy of rural electrification, under a headline that read, “Reader’s Digest turns to fiction.”

Over the years, the monthly would lash out at electric equipment suppliers that tried to illegally overcharge electric cooperatives. It would take on Missouri Gov. James Blair who attempted to hand over the right to supply electricity to the Missouri State Hospital to one of his former legal clients instead of allowing Callaway Electric to continue serving the load. It would fight for low-cost power when it challenged the state over its attempt to limit power production at Truman Dam.

More recently, its reporting on an EPA measure that would have halted low-cost power from electric co-op power plants resulted in readers sending more than 200,000 “Stop EPA” postcards to Missouri’s congressional delegation.

Those early Rural Electric Missourians were more newspaper than magazine. When they weren’t taking on all challengers with fiery editorials they taught members how to use electricity and reported on the latest efforts to extend electricity into the countryside.

That would begin to change as Marion McGee took over as editor in 1962. He began the use of feature photos along with an easier-to-read design and coverage of rural living.

Editors Bill Matteson and Don Yoest took the use of photography to new levels as these editors added talented photojournalists to the staff. In August 1968, a headline reading “Our changing face” greeted readers. “Our cover this month features process color photographs for the first time ever. While this printing process is quite expensive and cannot be a regular feature of your magazine, it is hoped that it can be used on special occasions in the future,” a story on the new design related.

The changes paid off as Missouri won the first of six George W. Haggard Memorial Journalism awards in 1973. The honor recognizes the electric cooperative statewide publication that best presents “lucid, forthright contributions to electric cooperative objectives.”  The latest of these awards came in 2019 and 2021. 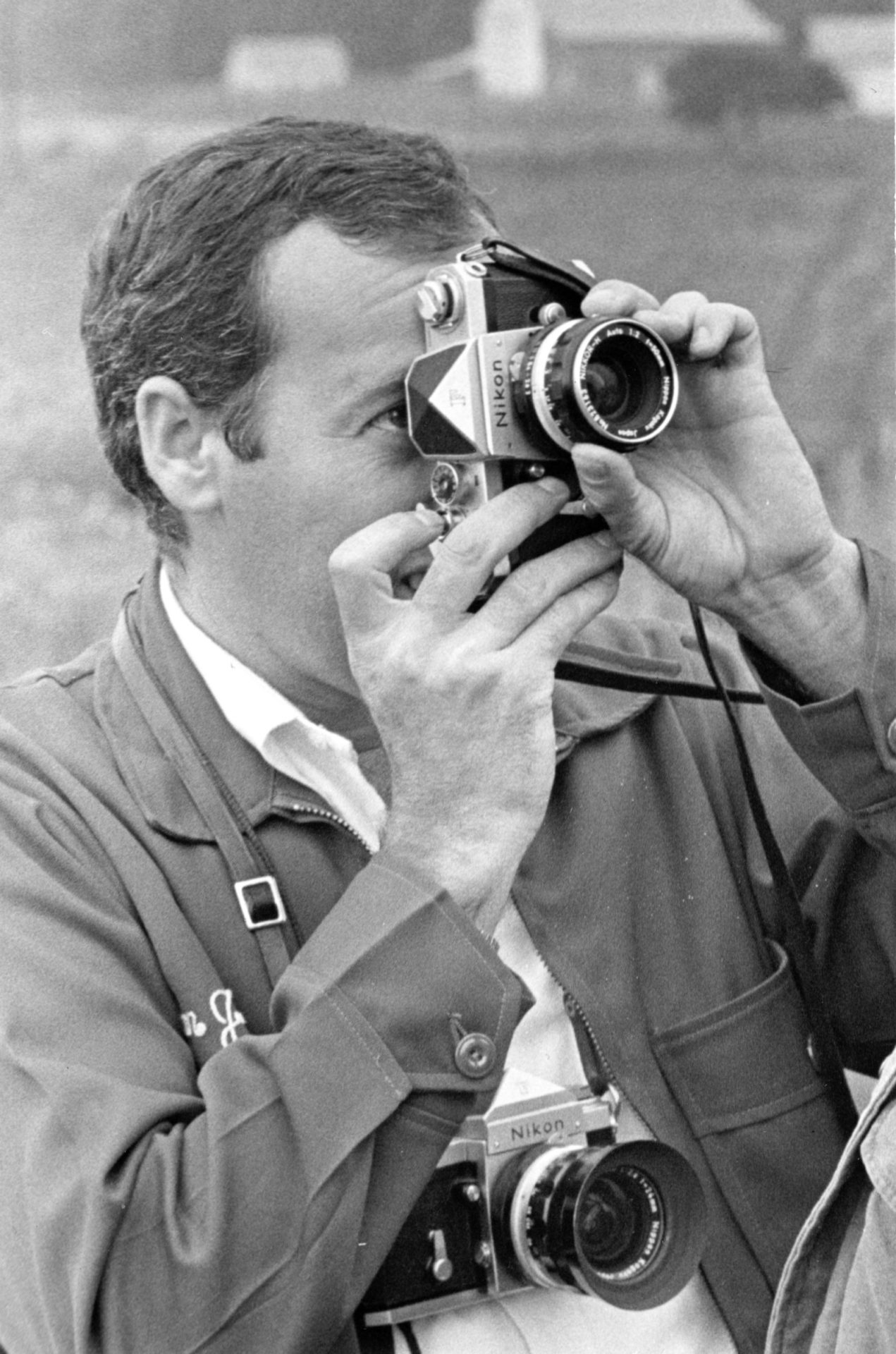 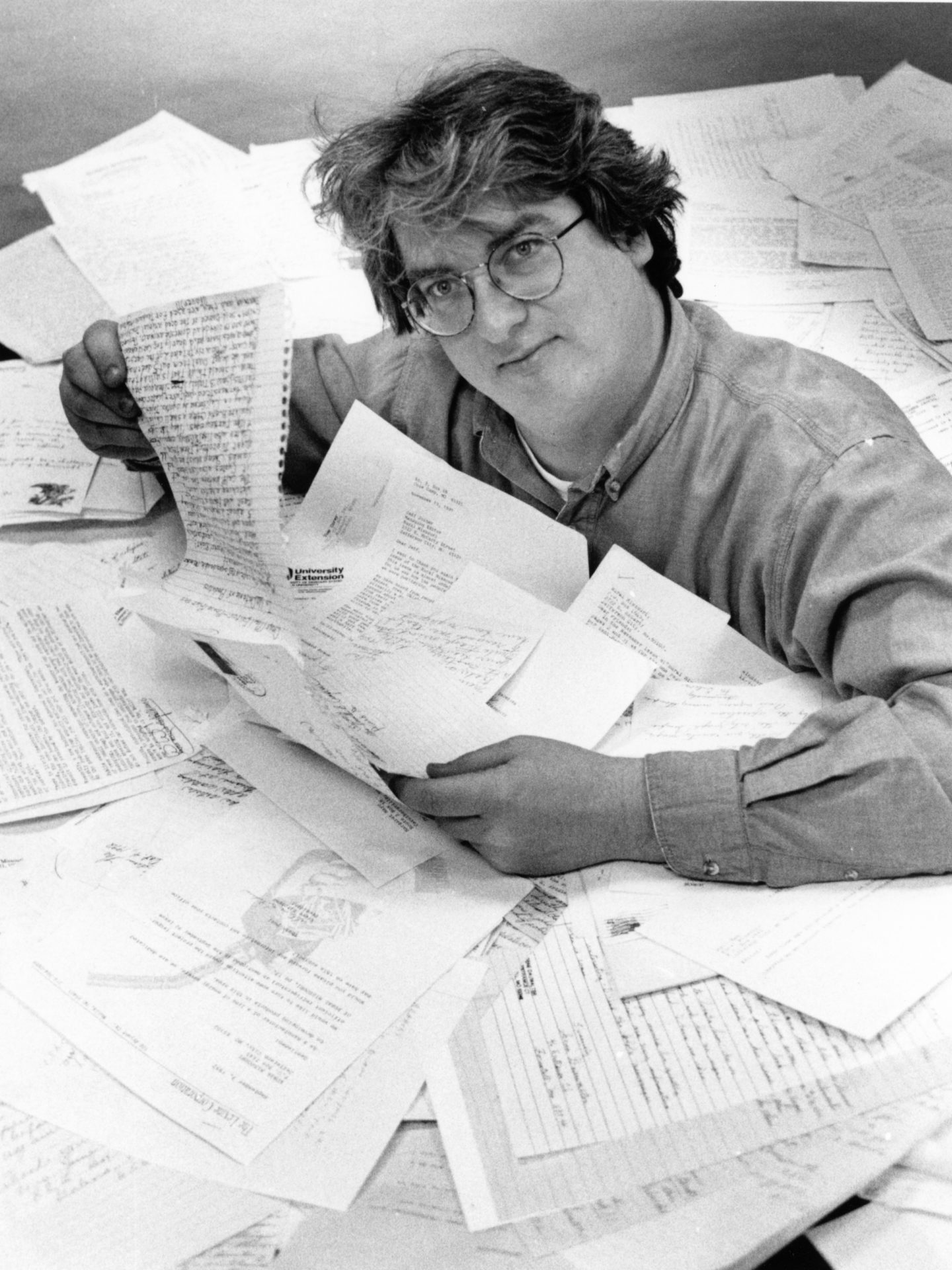 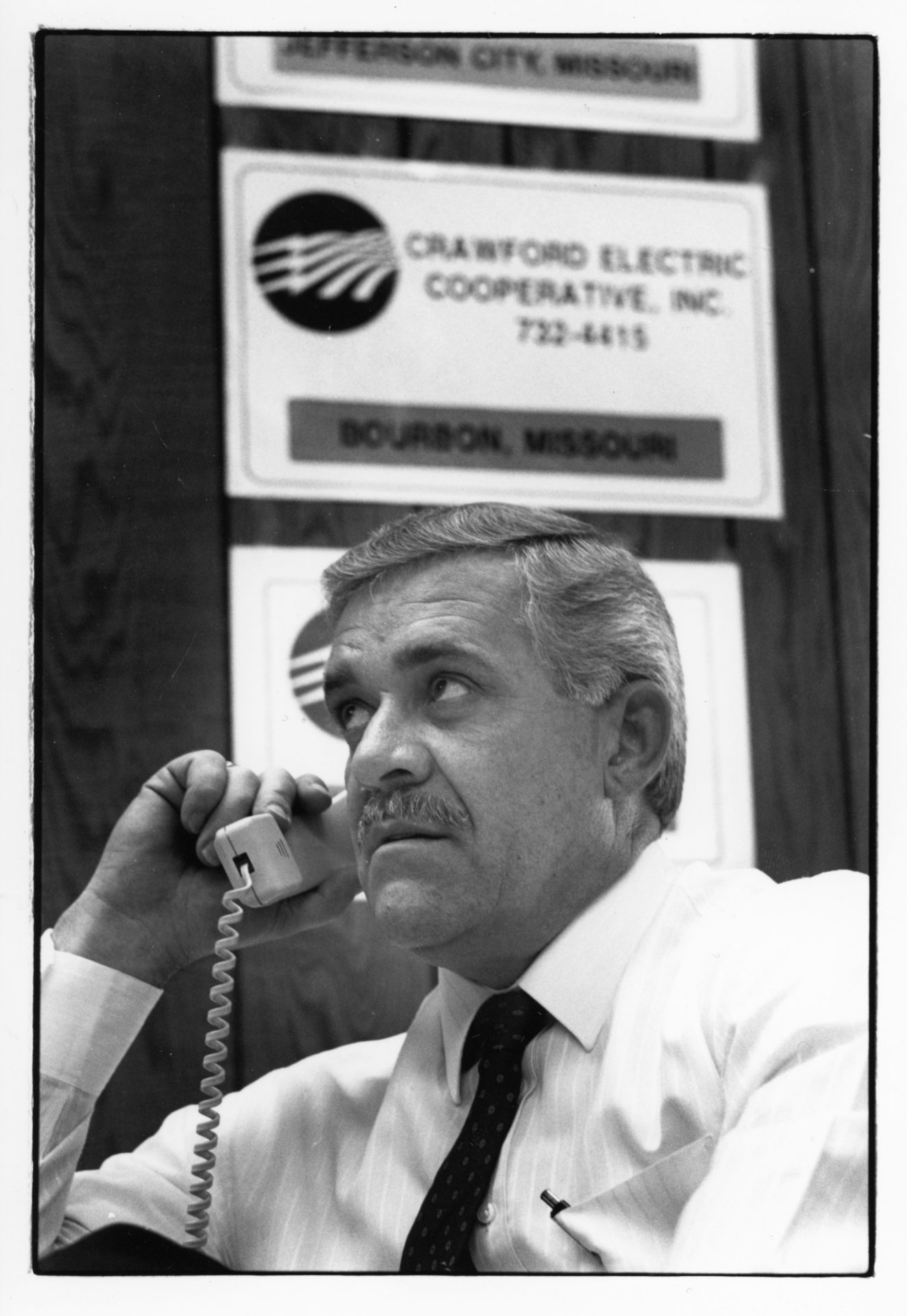 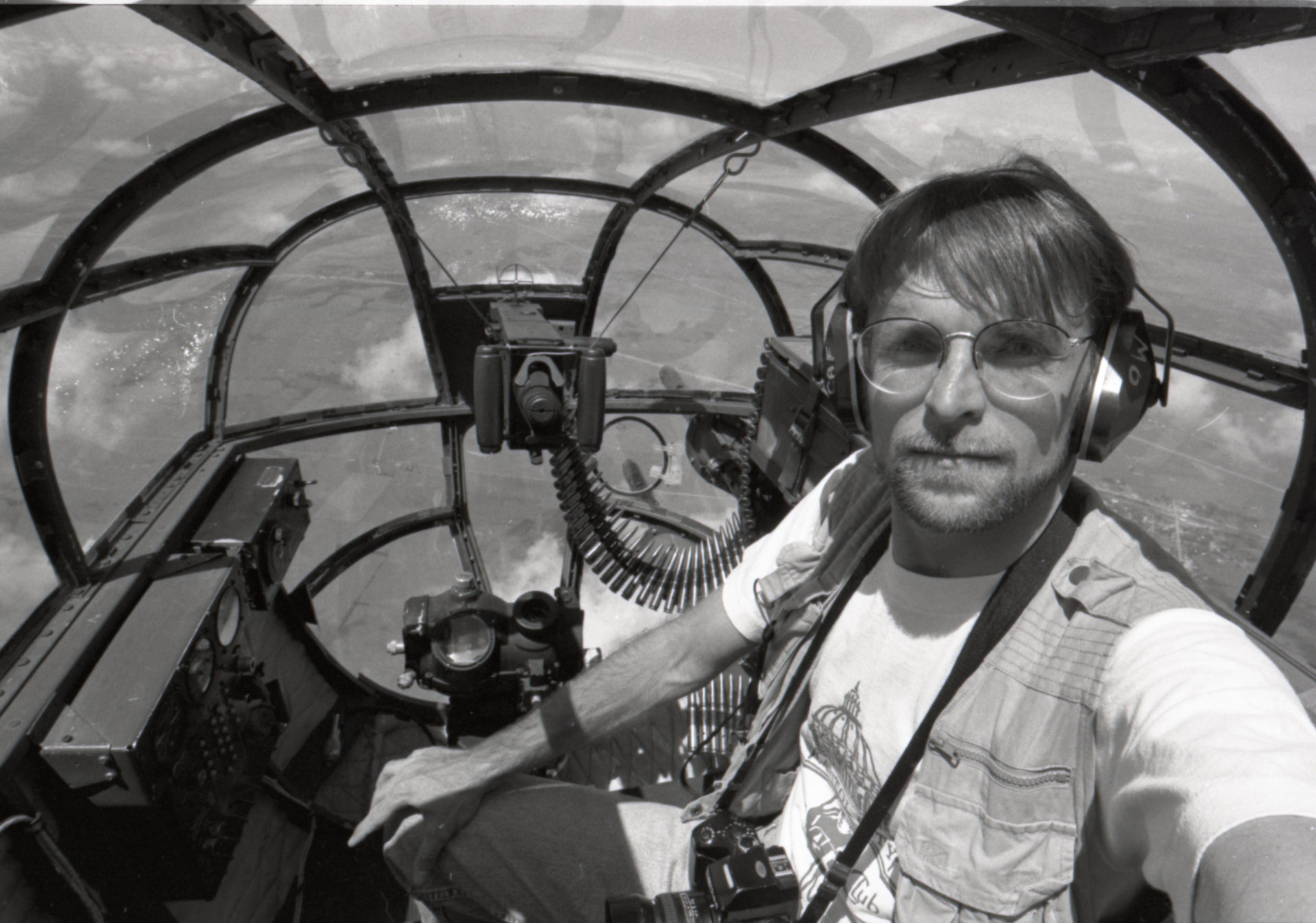 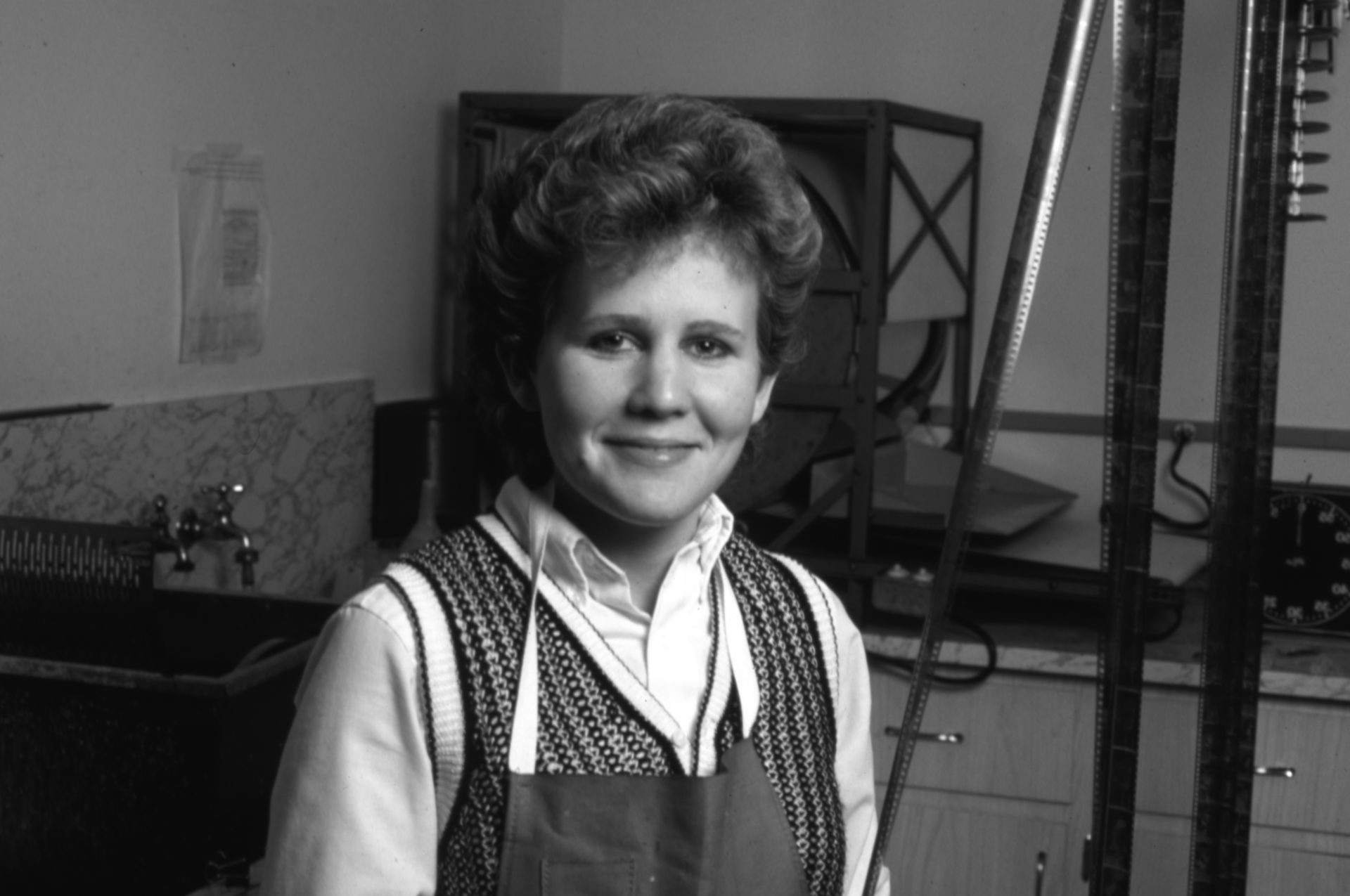 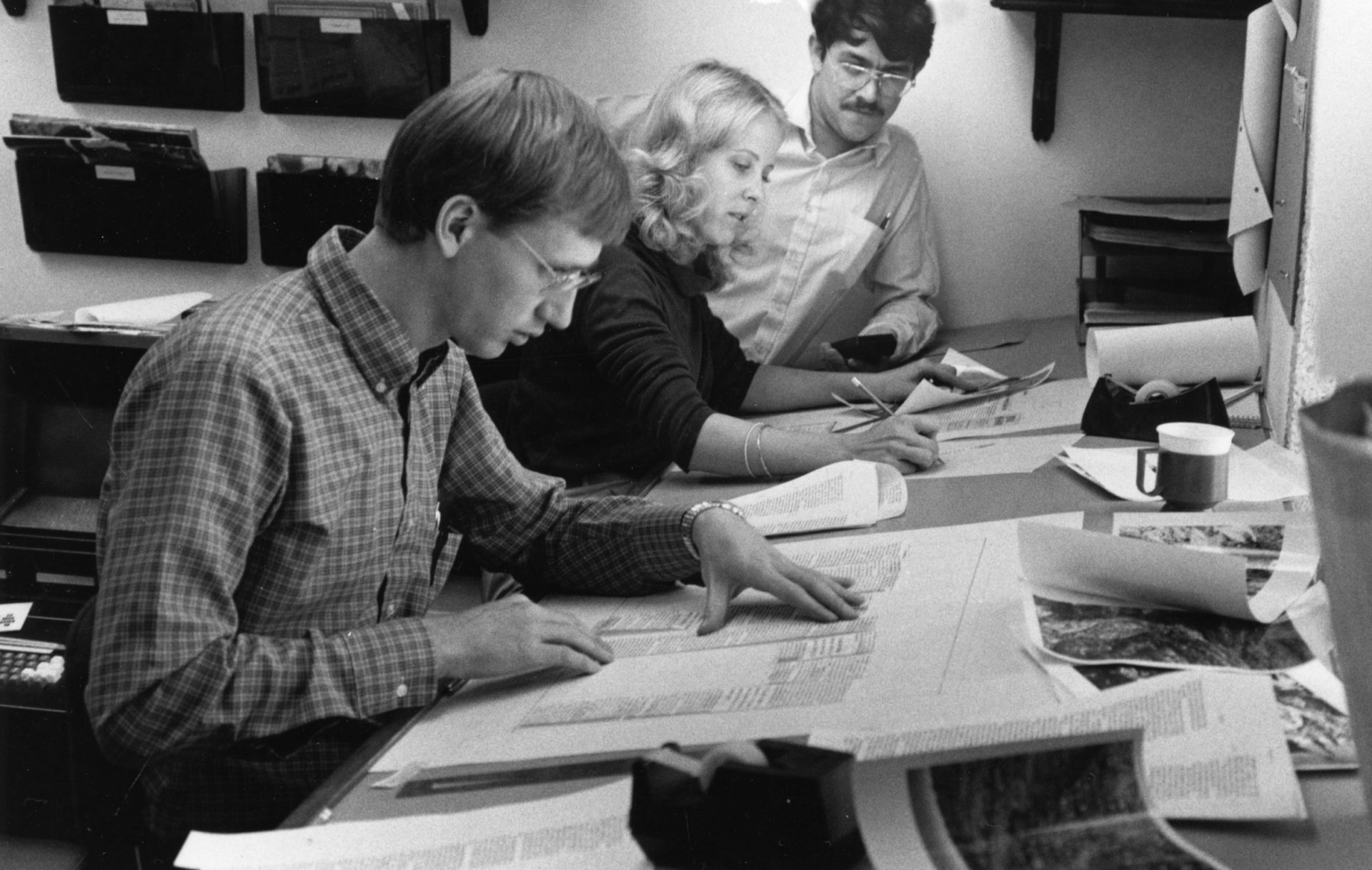 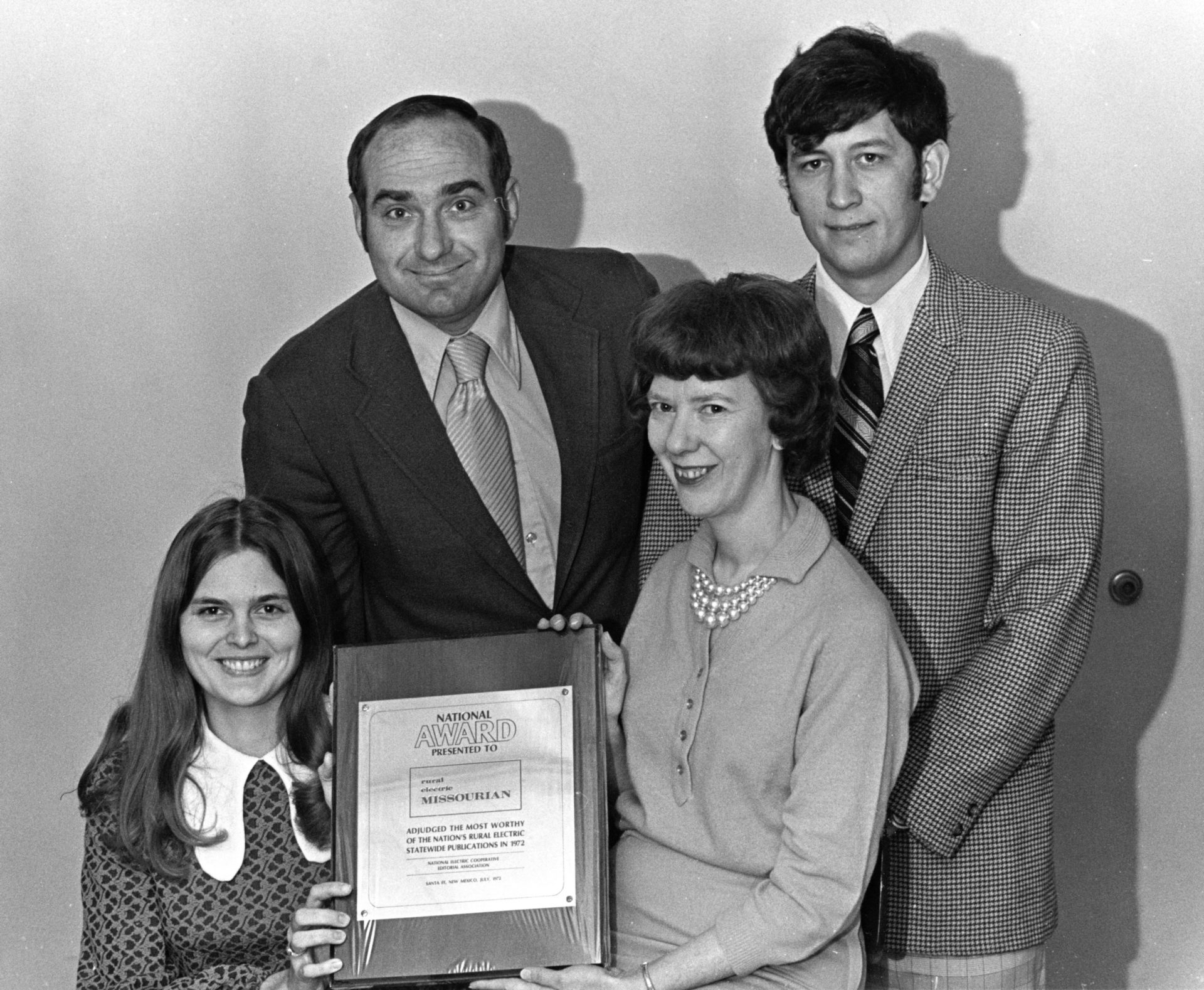 Perhaps Editor Steve Rudloff brought about the biggest change to the publication when he and his staff announced a new name — Rural Missouri — in October 1978. “Although we have taken the word ‘electric’ out of our name, we still are the official publication of the Association of Missouri Electric Cooperatives,” Steve wrote. “We are proud of this. It’s a privilege for us to enter your home each month, and we hope you like our new look.”

That issue sported a full-page color photo on the cover, a look that continues today. But it would be many years before the inside carried anything but black-and-white images.

In 1987, Don Wood left Ozark Electric Cooperative to take the helm as editor. He brought his cooperative’s members with him, swelling the circulation to more than 300,000 for the first time. Before he would turn the magazine over to current editor Jim McCarty, Don would do his best to get every electric cooperative in the state on board sending the magazine to members.

With the addition of Citizens Electric’s 17,000 members to the fold in 2001, Rural Missouri’s circulation topped 437,000 and passed Missouri Conservationist as the largest monthly in the state. That number continues to increase as more and more people move to rural areas. Today circulation is a whopping 580,000-plus and growing.

Rural Missouri would remain essentially a black-and-white tabloid until the new millennium when digital cameras became a reality. The first Nikon D1 used by the staff paid for itself by cutting out the cost of film, processing and color separations. Soon the entire magazine sported full-color images. The darkroom was shut down and turned into office space.

In the fall of 2019, the staff was working on a brand-new look for an old friend. It debuted with the January 2020 edition, which appeared as a magazine-size glossy publication for the first time.

Barely had the ink dried on the new design when the staff was forced to work remotely due to the COVID-19 pandemic. Before shutting the office down, production moved to the cloud and all editing was done not with the red pens and paper proofs of the past but instead online through shared PDFs. Today, Rural Missouri goes from concept to the presses entirely digital.

No longer is there a need to educate members on how to use electricity. Today we have turned our efforts toward helping rural people succeed. Early in its history our editors learned the true value of a story that reaches hundreds of thousands of people with a readership that tops 90%. We’ve seen restaurants featured in our pages so swamped with business that they ran out of food midday. Businesses that once closed in the winter months not only stayed open after being featured, they added staff. Home-based businesses moved to larger storefronts after Rural Missouri readers beat a path to their doors.

It’s not easy earning a living in rural areas. So it’s a great feeling to know we can help. It feels even better hearing so many readers tell us “I love that little magazine.”

Over the years we’ve soared high above the earth in the nose of a B-25 bomber and hauled our cameras into caves deep underground. We’ve floated the state’s rivers — including those in the north — and introduced new trends including the internet and microwave ovens. We’ve told the stories of sports legends and high school athletes who didn’t let what others would call disabilities stand in their path to success.

Our mission is to root for the underdog and do our best to make rural Missouri a better place in which to live.

On behalf of everyone who was part of our 75-year history, we say thanks to all of you who welcomed us into your homes and let us share your stories. We hope you will continue to enjoy our efforts for many years to come.

We will leave you with this excerpt taken from the 25th anniversary edition that was published in November 1973:

Past editors have but one regret: It is so seldom that we are able to retrace our steps to visit friendly people who shared their experiences.

Co-op business, appliances and power use we reported, but the memories are of mid-winter … a shining warm kitchen where lonely parents of drafted sons bestowed their affections … the line crew fighting snow drifts, using up a truck in a long night, getting the lights and pumps working again at dawn.

And memories of summer … though we reported the latest dairy equipment, lingering thoughts are of the hard-working, self reliant young couple. The air-conditioning we described, but grow misty-eyed thinking of the dear old ladies posing in the shade of their century-old home.

Images still … of directors not educated to know it couldn’t work, so they scratched co-ops from lean Missouri hills. And especially that rare breed of managers who could shoulder a passel of problems of their own, yet have a thought for yours.

They were great times, but the challenge is ever new. 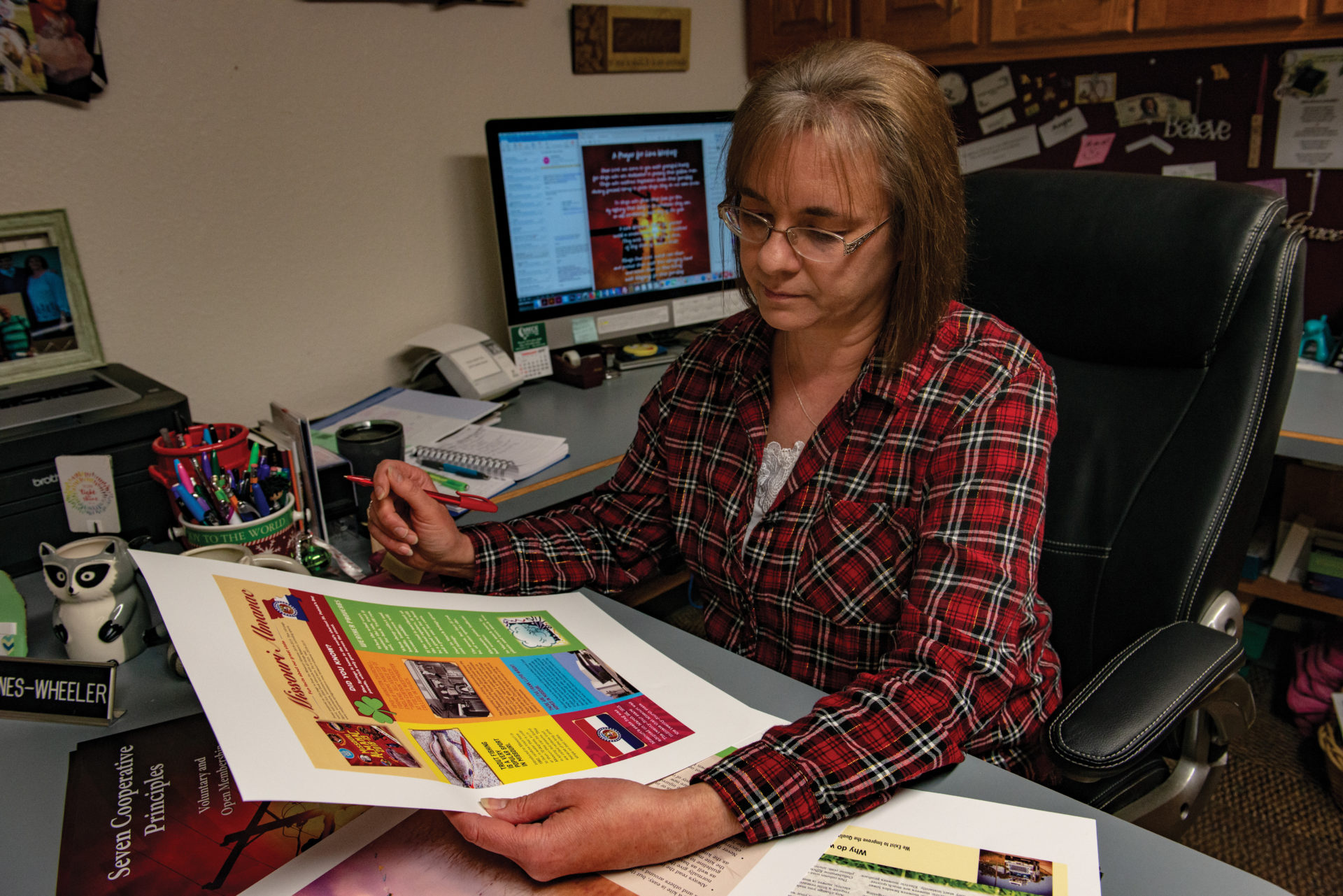 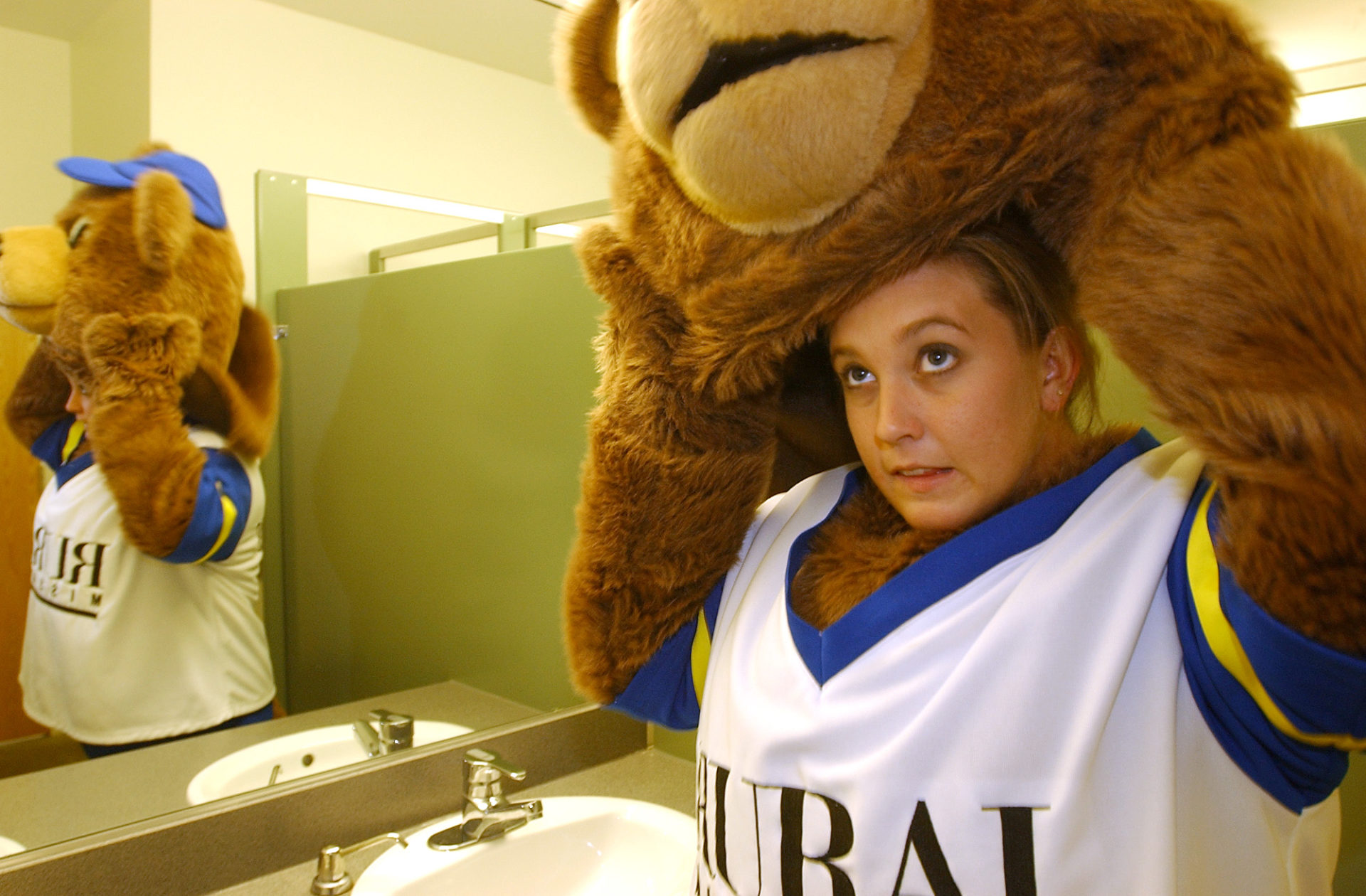 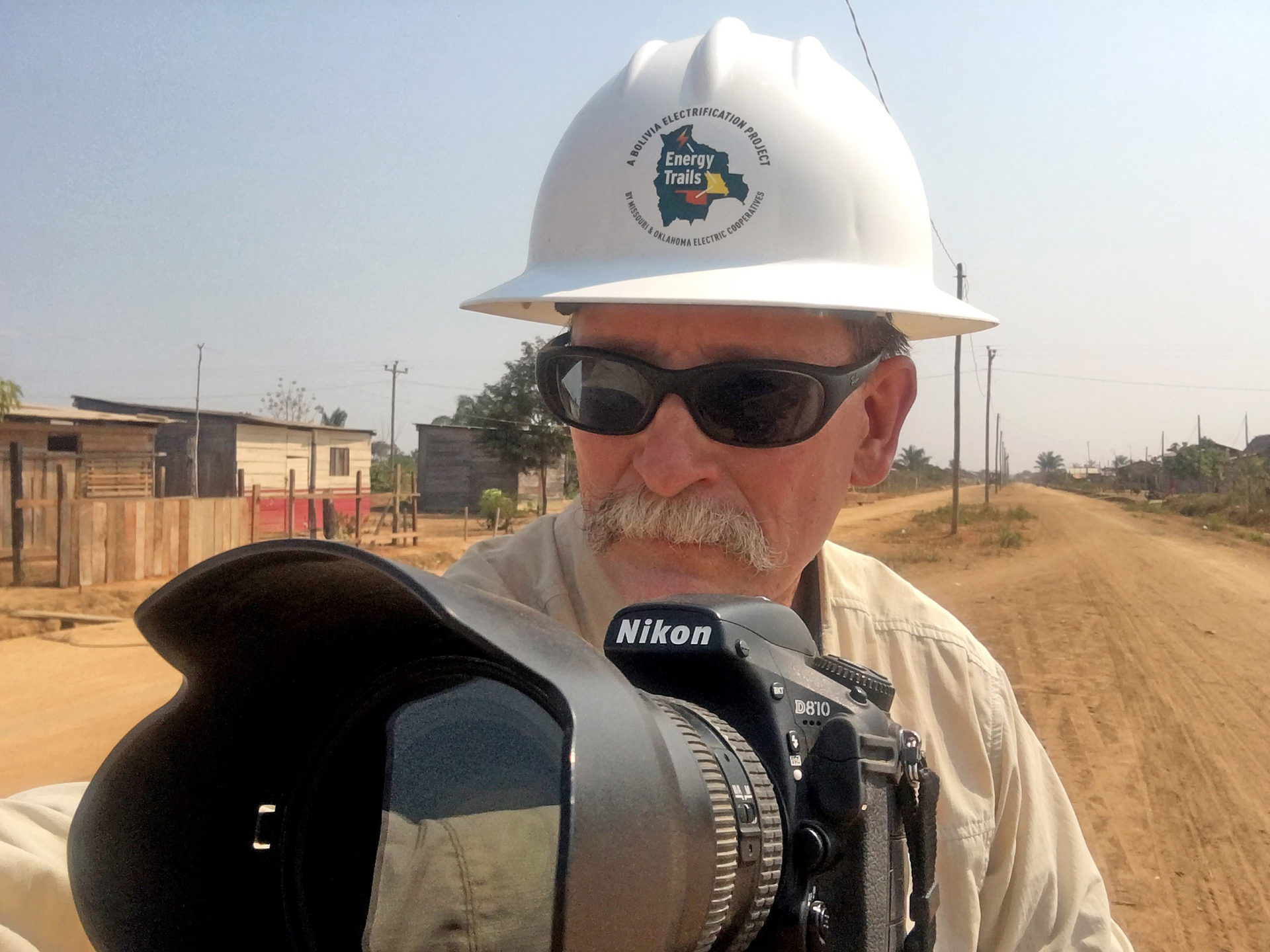 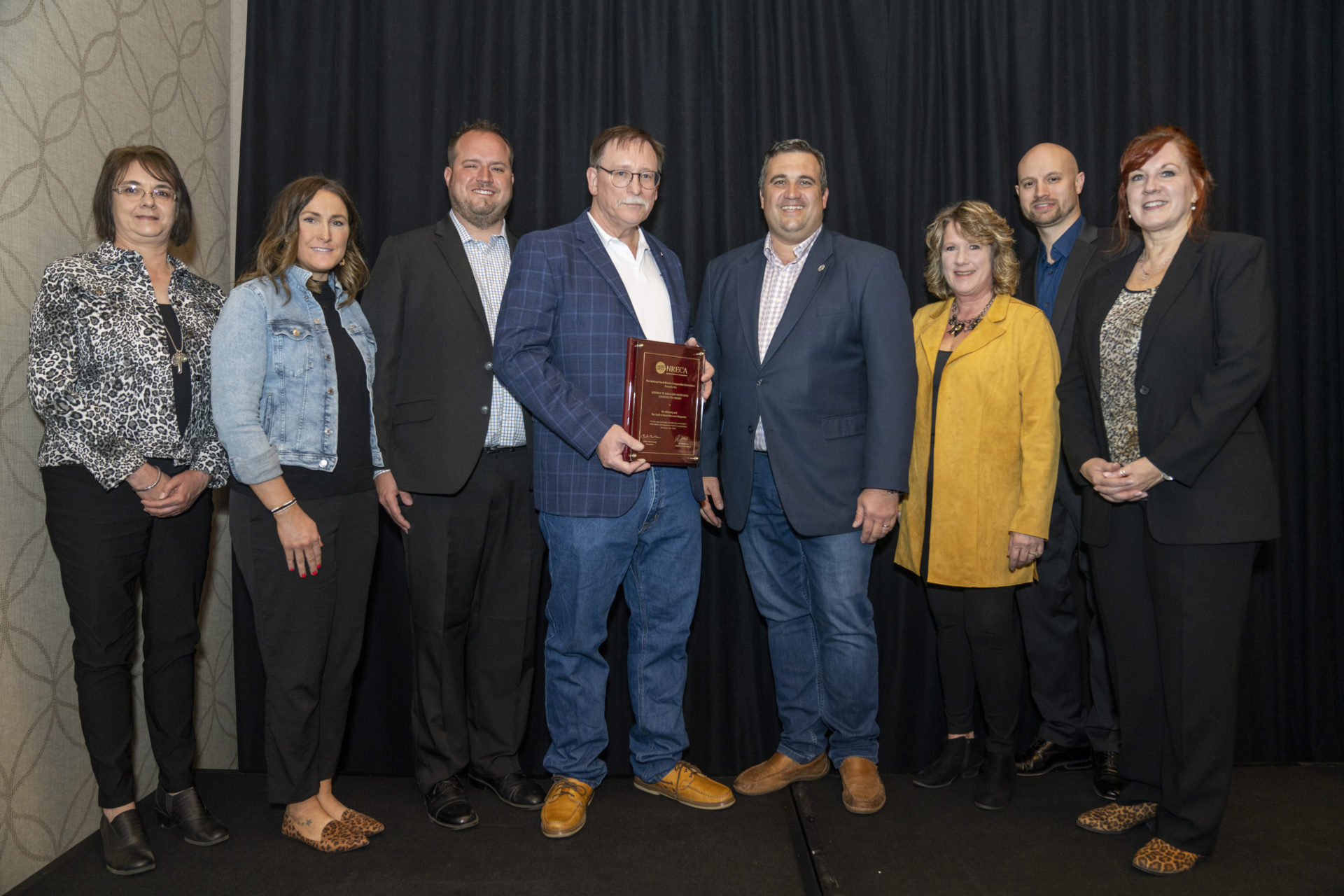 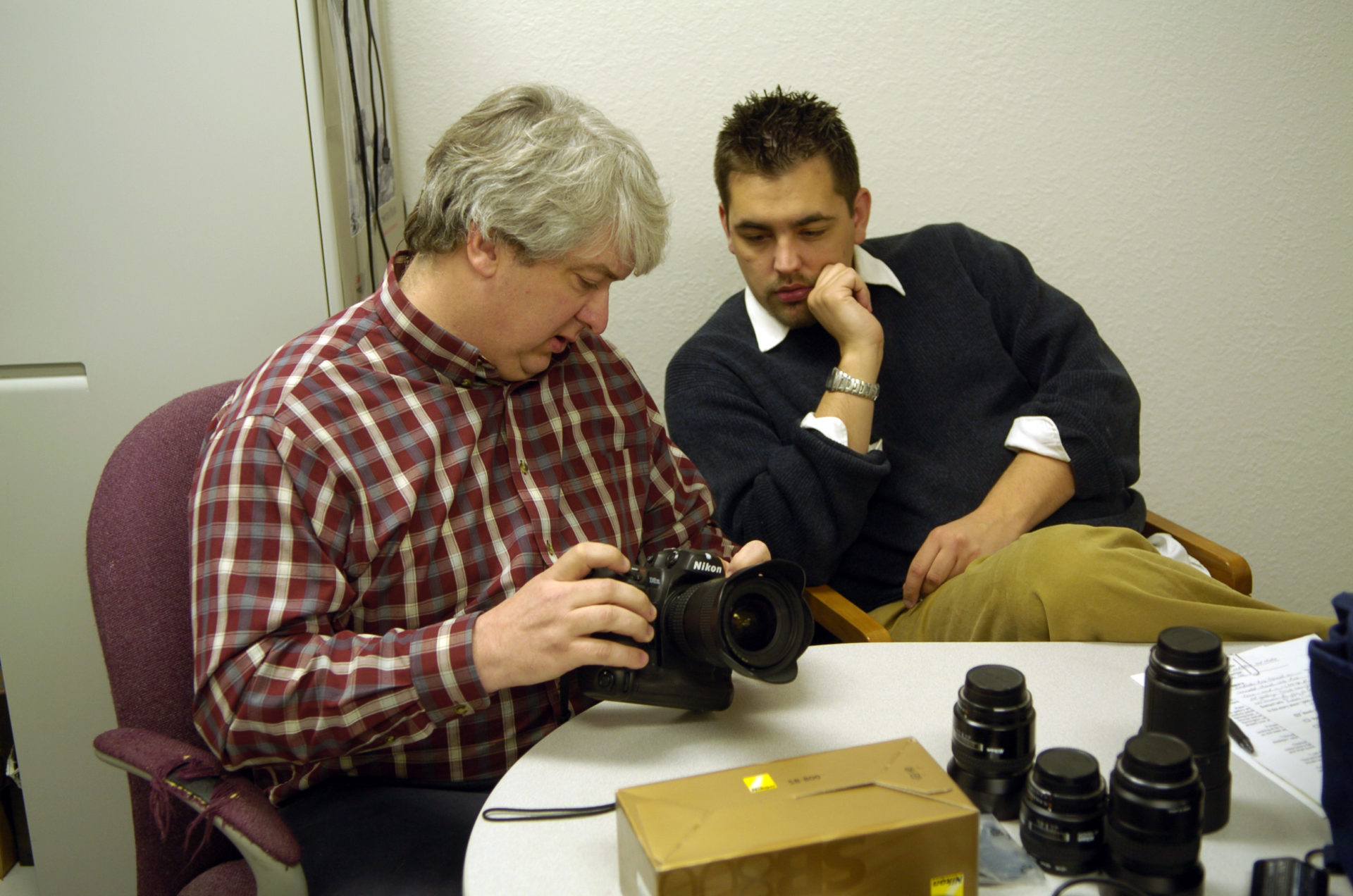 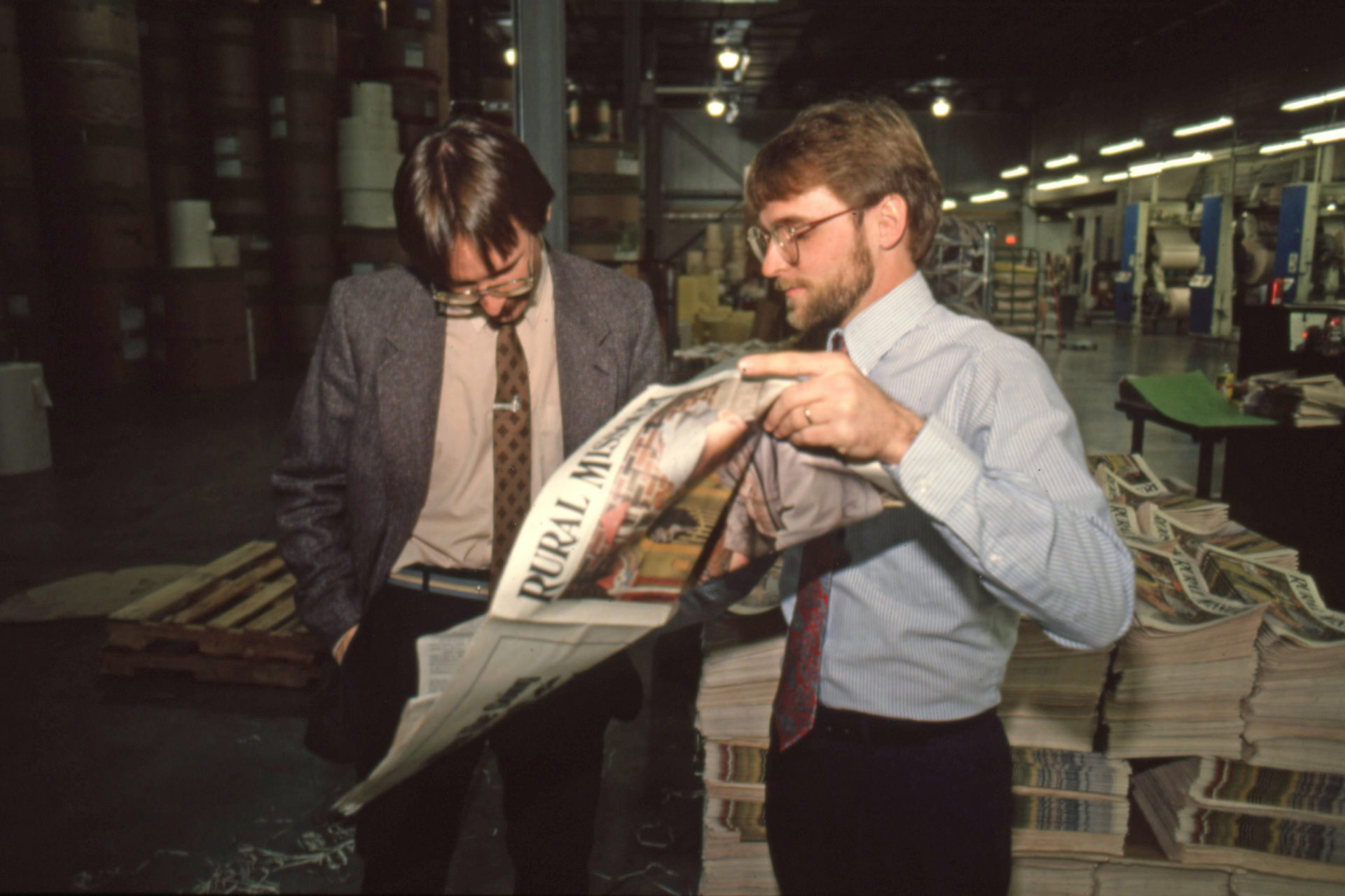 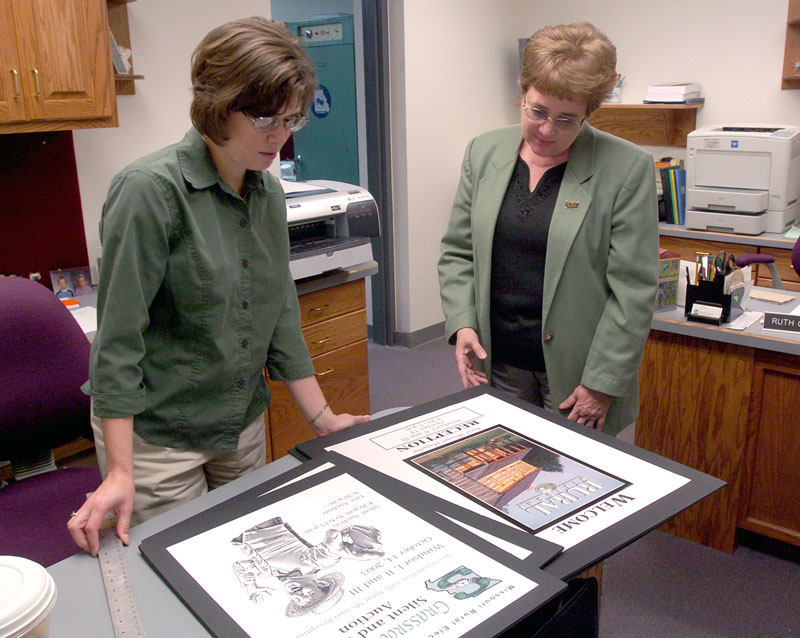 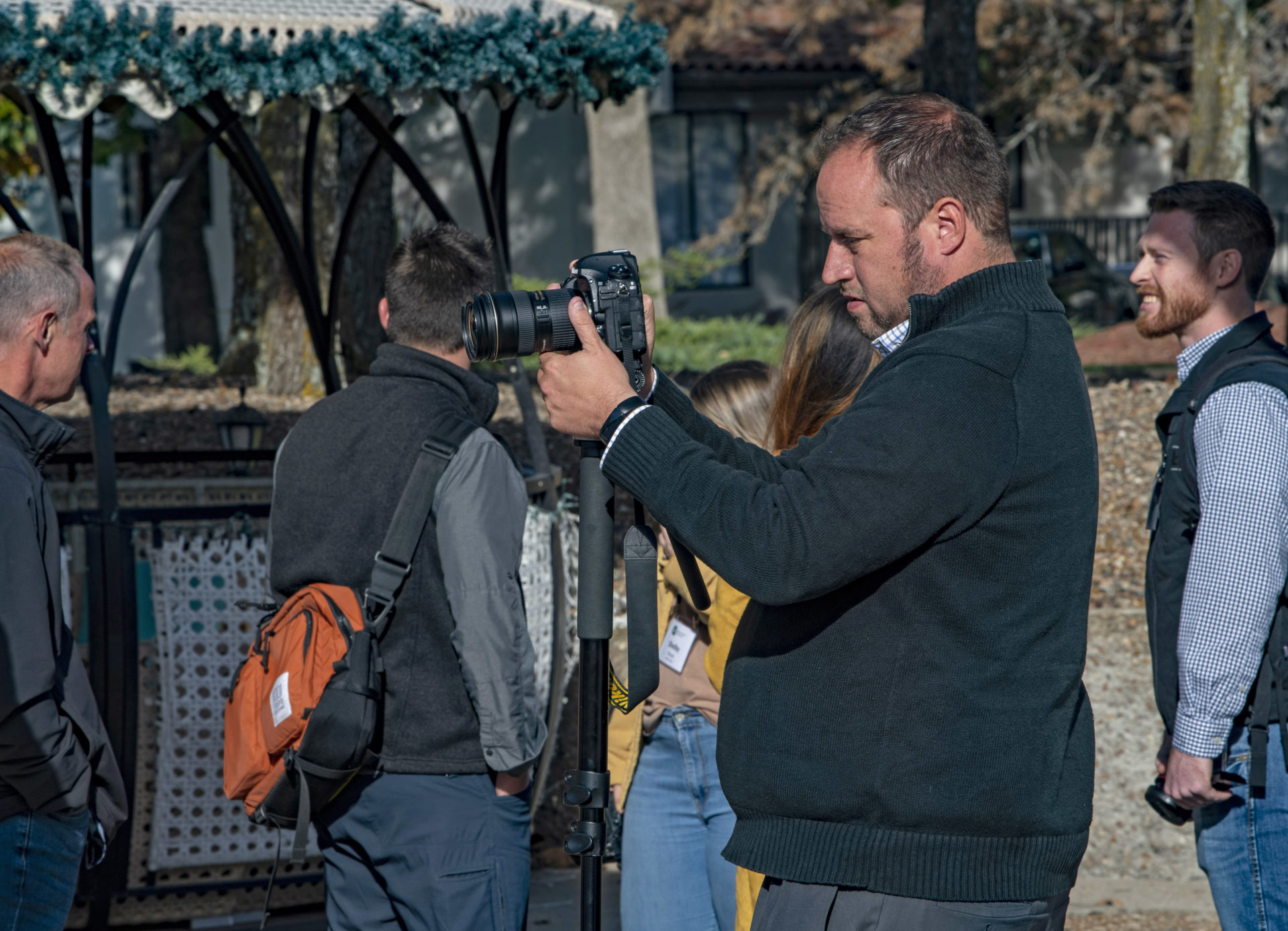 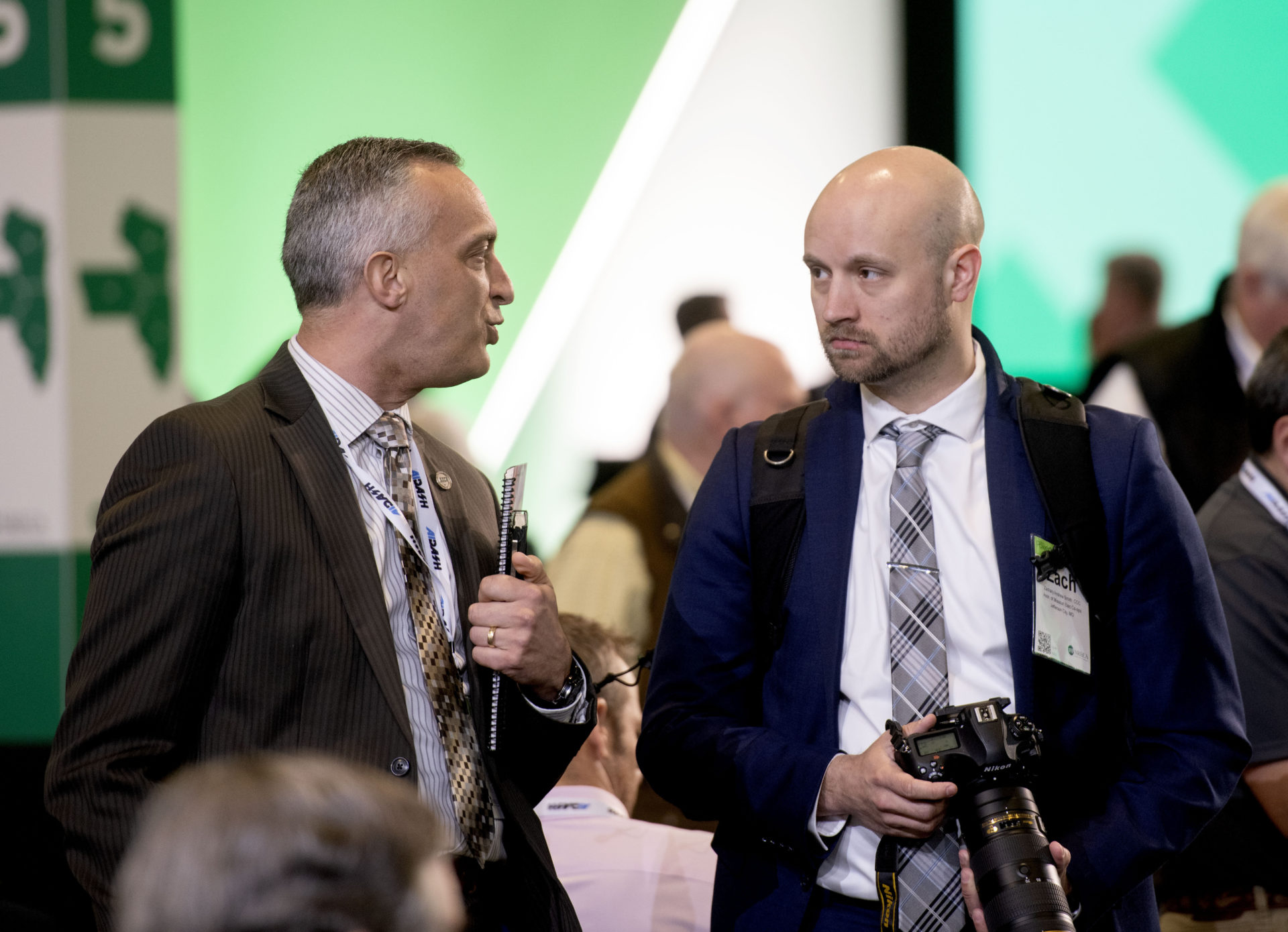 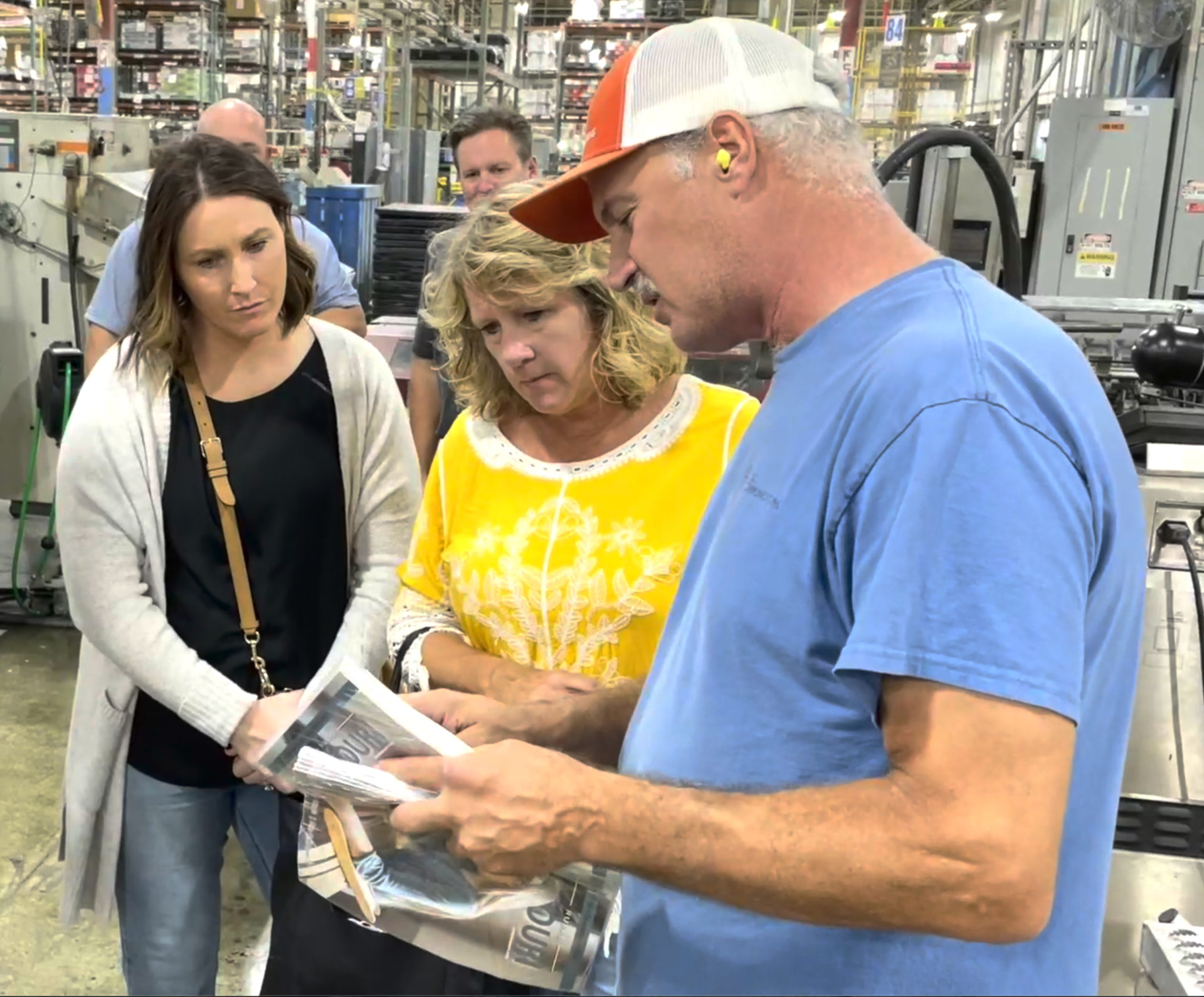