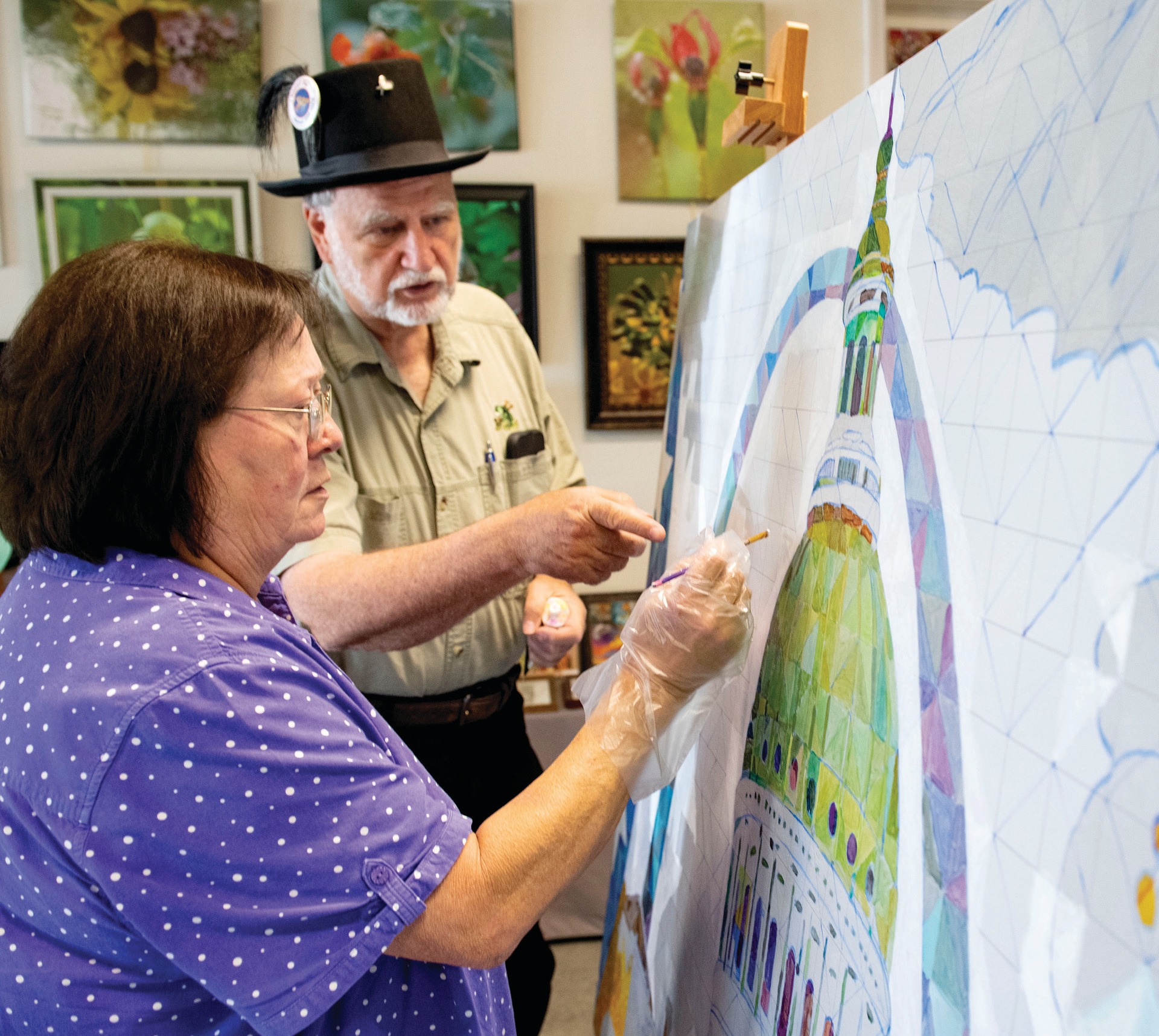 It started out as a novel idea. Southeast Missouri artists Aaron Horrell and Barb Bailey were preparing to take their latest Paint for a Cause project to the local fairgrounds. The project invites community members to donate $1 to paint a small portion of a larger painting with the money going to chosen causes.

“There was a newspaper article on the front page that day about the Missouri Bicentennial program looking for project ideas,” says Barb, a Black River Electric Cooperative member. “We had done a few of these small projects locally at the time and Aaron looked at me and said, ‘What if we did one of these on a bigger scale for the entire state?’”

“Early on it seemed crazy,” Aaron says. “We thought, as artists, we could do it, but it was a big undertaking. We checked with Guinness World Records on the most people involved in something like that and 5,000 was the current mark. We thought we could beat that.”

For the past year, Aaron and Barb have spearheaded the Missouri Bicentennial Paint for a Cause to create a massive mural painted by Missourians as a gift to Missouri. To date, more than 12,000 people have painted a 2-inch triangle on the massive mural that will, upon completion, find a permanent home in Jefferson City.

The first Paint for a Cause projects were in 2015 featuring canvases approximately 2 or 3 feet on either side. As the artists became more comfortable with the concept their paintings grew larger, including a 9-by-5-foot mural for the Cape Girardeau Veteran’s Home painted by more than 1,000 people. They knew if they could do that, they were up to the task of the bicentennial mural.

The mural is 30 feet long and 12 feet tall and split into 15 sections. It is made out of an aluminum composite. Each section features more than 1,700 triangles.

The state flag of Missouri is the background and 18 Missouri state symbols along with the Missouri State Capitol and Gateway Arch are in the foreground. An outline of Missouri is currently filled white and will include pertinent information about the project as well as sponsors.

The project is intended to bring in as many people as possible, so no donation is required, however it’s still appreciated if possible. They have taken sections of the mural across the state, already more than doubling the current record number of painters.

The bicentennial mural features state symbols and the state flag.

“It’s a great model for the best the bicentennial has to offer,” says Michael Sweeny, Missouri State Bicentennial coordinator. “It enables so many people to get involved in a common endeavor all across the state. It has the capacity to bring in so many people. That is the best thing that can come out of this bicentennial. Plus, it will endure in Jefferson City well past Aug. 10, 2021.” 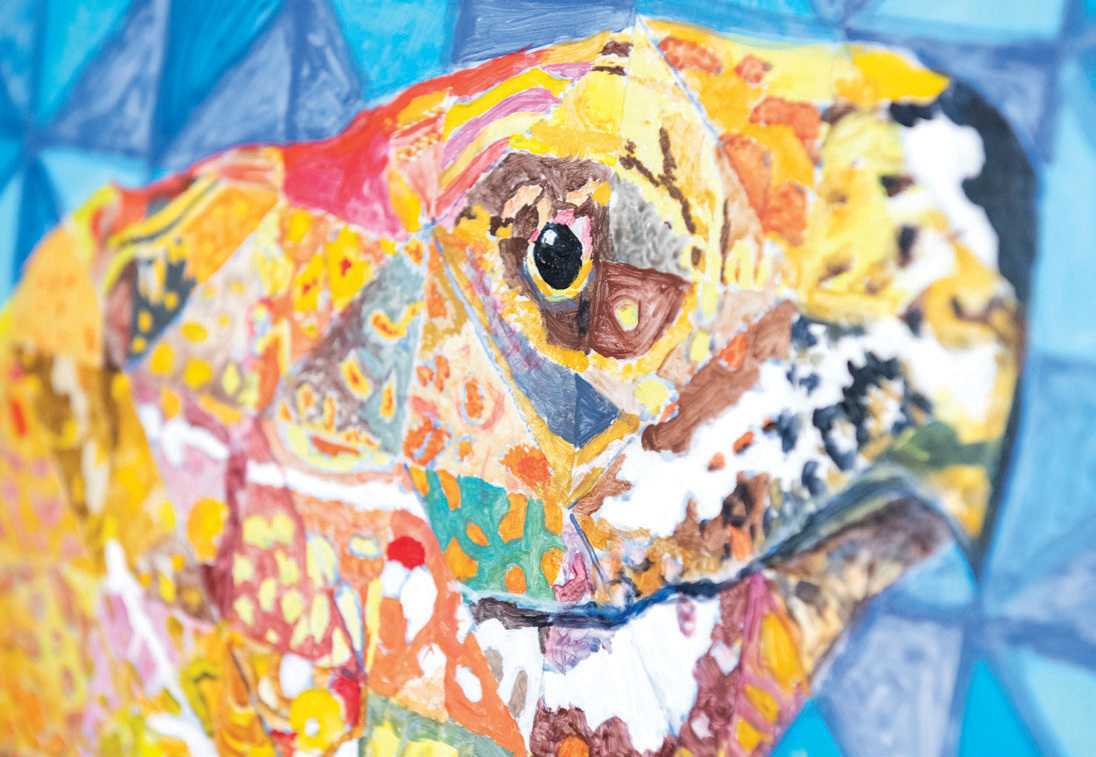 The details of the head of a three-toed box turtle — the state reptile — show the intricacies in the mural. 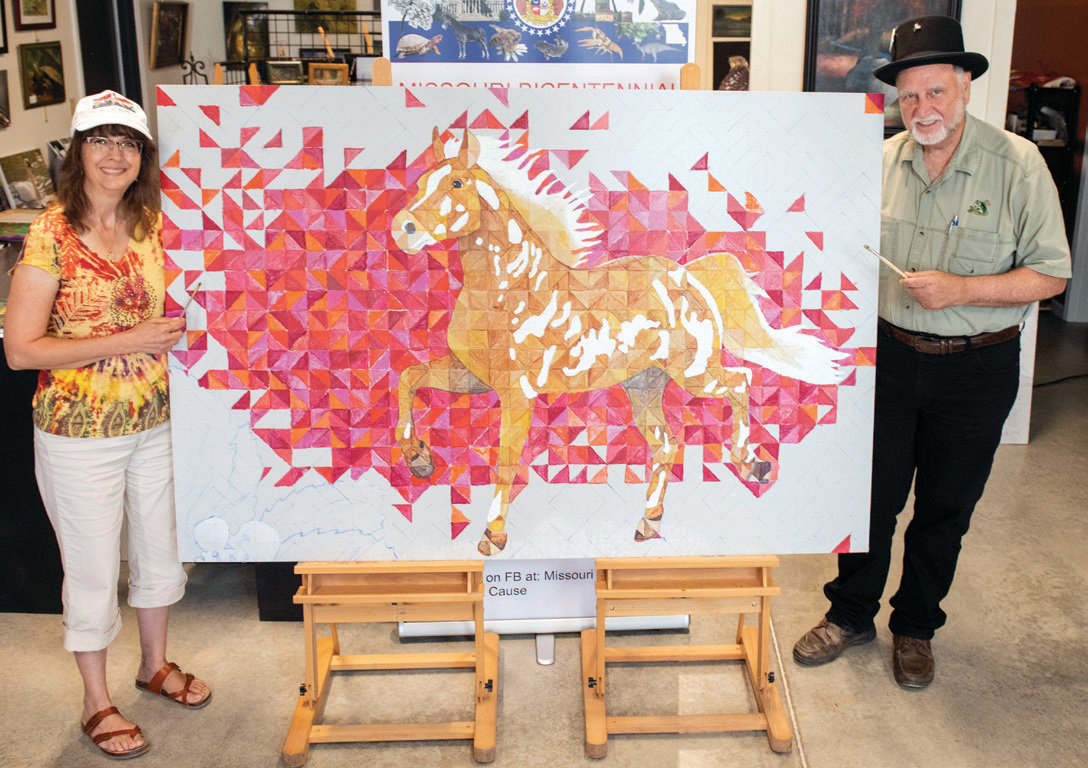 Barb and Aaron show a partially finished portion of the mural.

That inclusivity brings in a wide swath of people. “Little babies have painted holding the brush and their parents moving their hand and we’ve had people in their 90s do it,” Aaron says. “We’ve had people with muscular dystrophy paint and we’ve had a legally blind person paint a triangle. Barb and I are pretty adept at talking you through painting it, holding your hand and doing it. Anyone and everyone can paint one triangle.”

That one triangle is all you get, however. “The governor of the state of Missouri just got one triangle like everyone else,” Aaron says with a laugh.

Barb says meeting so many Missourians from so many different walks of life has been a blessing. “For me, I’ve enjoyed seeing and knowing that there are lots of nice people in Missouri,” she says. “We have met so many great people that have been excited about this project.”

In early March, the project was humming along with about half the triangles painted and ready for completion by the bicentennial. However, COVID-19 has brought the project not to a complete halt, but a considerable slowdown. The mural’s home when it’s not traveling — The Painted Wren Art Gallery — closed for a few months along with event cancellations across the state.

“We had so many school visits and events planned that we were really on a roll,” Barb says. “But then everything just stopped.”

The Cape Girardeau art gallery is back open and Missourians who have yet to paint a triangle are encouraged to stop by and paint a piece of history. Taking the panels across the Show-Me State is no small undertaking, both in effort and financially. The project is still seeking sponsors to help offset those costs as well as selling metal prints of one of Aaron’s painting, baseball hats and commemorative buttons featuring the state symbols displayed on the mural.

Aaron says when the project is completed, it will be a point of pride for the artists and contributors. “We’re two Best of Missouri Hands Artists painting a record-setting mural just using other peoples’ hands.”

To learn more about the Missouri Bicentennial Paint for a Cause visit www.mo2021mural.org, www.facebook.com/MissouriBicentennialPaintForACause or call 573-579-1000.