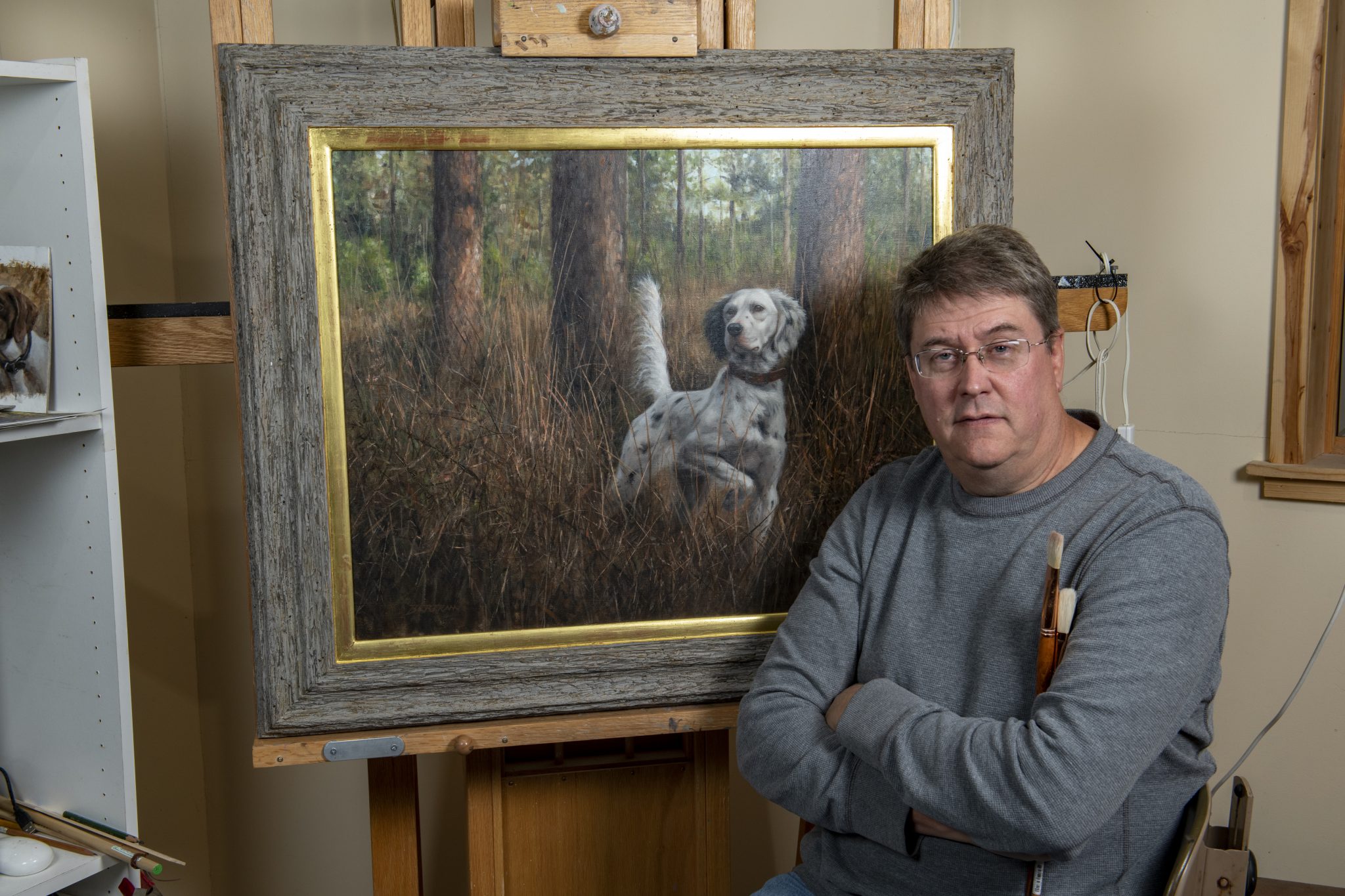 Man’s best friend from the bush of Bob Bertram

As far as a midlife crisis goes, Bob Bertram’s was a calmer affair than most. To be fair, he saw it coming all along. At the age of 39, after fervently pursuing a freelance career in the St. Louis advertising world, he felt the muse calling him again. This time, it couldn’t be ignored.

“I always felt like I was supposed to be a painter,” Bob says.

Bob is an artist with two studios: the great outdoors and the easel. With pencil, brush or silverpoint in hand, he’s drawn a new path for himself and made a name for his renderings of wildlife, sporting dogs and hunting scenes.

Trained in commercial art, Bob gives credit to two mentors — Don Kueker and the late Robert K. Abbett — for the artistic skill he has developed.

“Every painting has to be about something,” says the Cuivre River Electric Cooperative member. “If you pick a few areas to emphasize and subordinate the other stuff, you’re telling the story much better.” Two strong elements of Bob’s style are his use of contrasting light and dark tones and hard and soft edges to direct the viewer’s eye. The dark tentacle-like branches of a live oak lead to the locked gaze of an English setter who has just gotten the scent of a covey. A sea of native grass waves around a Gordon setter, tongue lolling with rapt attention at a pheasant bursting from its hiding place.

“There’s a degree of intensity that fascinates me about bird dogs,” Bob says, “so if I can convey that, it makes me and the clients happy.”

From a distance, the trunks of pines or the stiff stems of switch grass appear almost photographic in detail. A closer inspection reveals them to be a collection of brushstrokes and lines made with the edge of rubber rollers and paint knives. A different effect takes hold as textures begin to take shape. Bark becomes rough and grass almost translucent from the light Bob manufactures. For this combination of realism and impressionism in the details, the painter takes his cues from another art form — music.

“Your brain gets more excited and jazzed, I think, about stuff where it kind of fills in the gaps,” Bob says. “I love songs that do the same thing mentally: They tell you the story, but there are things that make you think a little bit.”

About 70 percent of Bob’s work is done on commission, with the remainder going to gallery shows across the country. Typical clients are hunters who want a portrait or scene of their dog. Oftentimes Bob works from reference photographs and places the subject amidst the type of cover in which they hunt. Sometimes the unlikeliest of scenes becomes a favorite, such as the Brittany napping by the water bowl between field trials.

Whatever the scenario, the element that brings these paintings together is commemorating a constant companion. From an assortment of strokes and shapes, a great moment afield becomes locked in time. Like all great art, the work hints at a deeper meaning than simply the scene it depicts.

“When I first started to hunt, it was a successful day if I got my limit,” Bob says. “As I get older, that becomes less important. It’s more about, ‘Was it a great day? Did we have some laughs? Did we get to watch some incredible dog work?’ It’s much more experiential.”