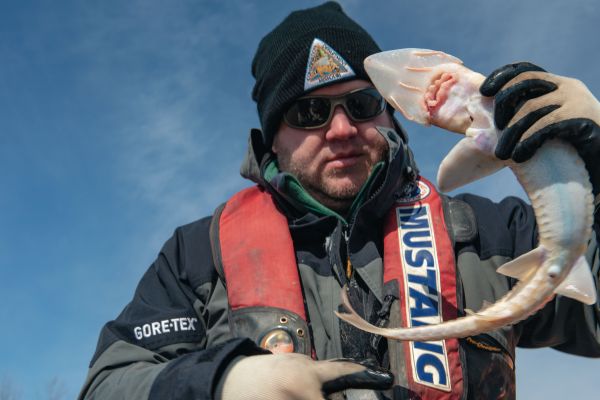 Missouri intensifi es efforts to save a living fossil

In the crisp morning light, a boat sets off down the Missouri River in the shadow of Fort Osage near Sibley. Laden with instruments and ferrying three Missouri Department of Conservation researchers, it’s a familiar sight on Missouri’s lakes and streams. Today, however, is different because they’re in search of an endangered species that has been swimming the waters since the time of dinosaurs.

MDC’s role is part of the multi-agency Missouri River Recovery Implementation Committee, which includes the Army Corps of Engineers, the U.S. Fish and Wildlife Service and numerous stakeholders. Operating across fi ve states, their collective effort is directed at keeping the pallid sturgeon from going extinct. In Missouri, Resource Science Supervisor Kasey Whiteman says MDC’s goal is to help the fi sh make a full recovery. To that end, the department will ramp up its ongoing efforts in the spring and fall of 2019.

“The amount of information we’ve collected is tremendous and that’s allowed for the gains we’ve seen so far,” says Kasey. “It’s commendable that there’s been a big commitment by the federal government, state agencies and stakeholders to do this.”

For fi ve weeks each spring and fall, MDC personnel have a familiar routine. They hit a boat ramp along the Missouri River at dawn, pulling in trotlines full of fi sh in the hopes of catching a rare pallid. In the afternoon they re-bait several hundred hooks with worms and reset the lines for another night’s fi shing.

“A lot of Missourians grew up trotlining because their grandpa did. They love catfi sh and catfi sh are great, but there are other things in the river,” says Resource Science Assistant Jacob McQuaid. “That is the really cool thing about this, interacting with the fi sh. And this fish is basically a dinosaur.”

The pallid is the largest of Missouri’s three sturgeon, which include the lake and shovelnose. Fully grown, pallids can reach up to 6 feet in length and weigh 100 pounds. Covered in smooth skin and a row of bony plates called scutes, the fish’s name comes from its pale hue. Because they grow slowly and live 40 years or longer, it takes a long time for pallids to produce offspring.

Those factors, combined with a loss and change of their natural habitat and the fact that sturgeon eggs were once highly prized by commercial fi shermen as a source of caviar, have contributed to the species’ decline. Since 1992, more than 187,000 pallids have been stocked in the Missouri River, but they alone won’t be enough to save their species. According to Kasey, researchers have diffi culty fi nding wild-born fi sh younger than 3 or 4 years old. Last year the department caught 66 pallids. Forty-four of those were from hatcheries and only fi ve have been confi rmed as truly wild, which is slim evidence that the fish is reproducing enough to maintain a stable population. 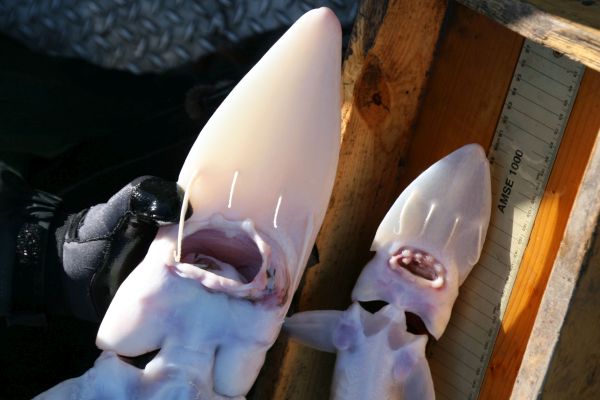 Despite similarities, there are differences between adult pallid, left, and shovelnose sturgeon. The barbels above the mouth form a slight crescent shape on pallids and a straight line on shovelnose.

“We have been able to pick up a few larvae, but nothing suffi cient to make sure they are growing up,” Kasey says. “If we can catch the 5- or 6-year-old fi sh we haven’t seen in the hatchery, then we know there are still some out there making it past the early stage.”

On the river, Jacob along with resource staff scientists Tom Boersig and Adam McDaniel, survey the day’s catch. There are a few blue catfi sh and invasive Asian carp but most are the pallid’s cousin, the shovelnose sturgeon. No matter the species, every fi sh caught is measured, weighed and released. If a sturgeon is already tagged, its marker is recorded. And while the pallid sturgeon is the focus, the scientists don’t waste the opportunity to check habitats and measure river velocity, turbidity and temperature. All of these factors may play a role in why the researchers are fi nding so few wild fi sh surviving to a certain age. Transmitters implanted in adult pallids will track their movements and help MDC determine where and why they might be moving.

A greater mix of genetics, or biodiversity, in the river means the pallid stands a better chance of surviving on its own. For that reason, when a hatcheryraised sturgeon is caught in the river, it can’t be used to breed more fi sh. None of the Missouri wild pallids caught in 2018 were reproductively ready, compared to the year before when fi ve fi sh out of 62 caught were considered viable for breeding. Still, Kasey remains positive, since MDC’s counterparts in Nebraska were able to catch wild sturgeon with reproductive potential.

“That’s part of it, because these fi sh don’t necessarily spawn every year,” Kasey says. “They spawn every other year or three years, and some of the data is telling us there may be even longer breaks in between.”

As MDC and its partners continue their efforts across the Missouri River Basin, anglers in the Show-Me State have a role to play too. Commercial fi shing for sturgeon is prohibited, but in Missouri shovelnose sturgeon under 30 inches long are legal to keep. Despite similarities in appearance, one major difference can help anglers tell the two apart (as seen in the photo on this page): the barbels located above the mouth appear in a slight crescent on pallids and a straight line on shovelnose.

“When in doubt, let it go,” Kasey adds. “If you do catch a very big sturgeon, which does happen in the Missouri, Grand, Lamine and Chariton rivers, take a picture of it, document it and put it back immediately. And if it’s a pallid sturgeon, please let us know.”