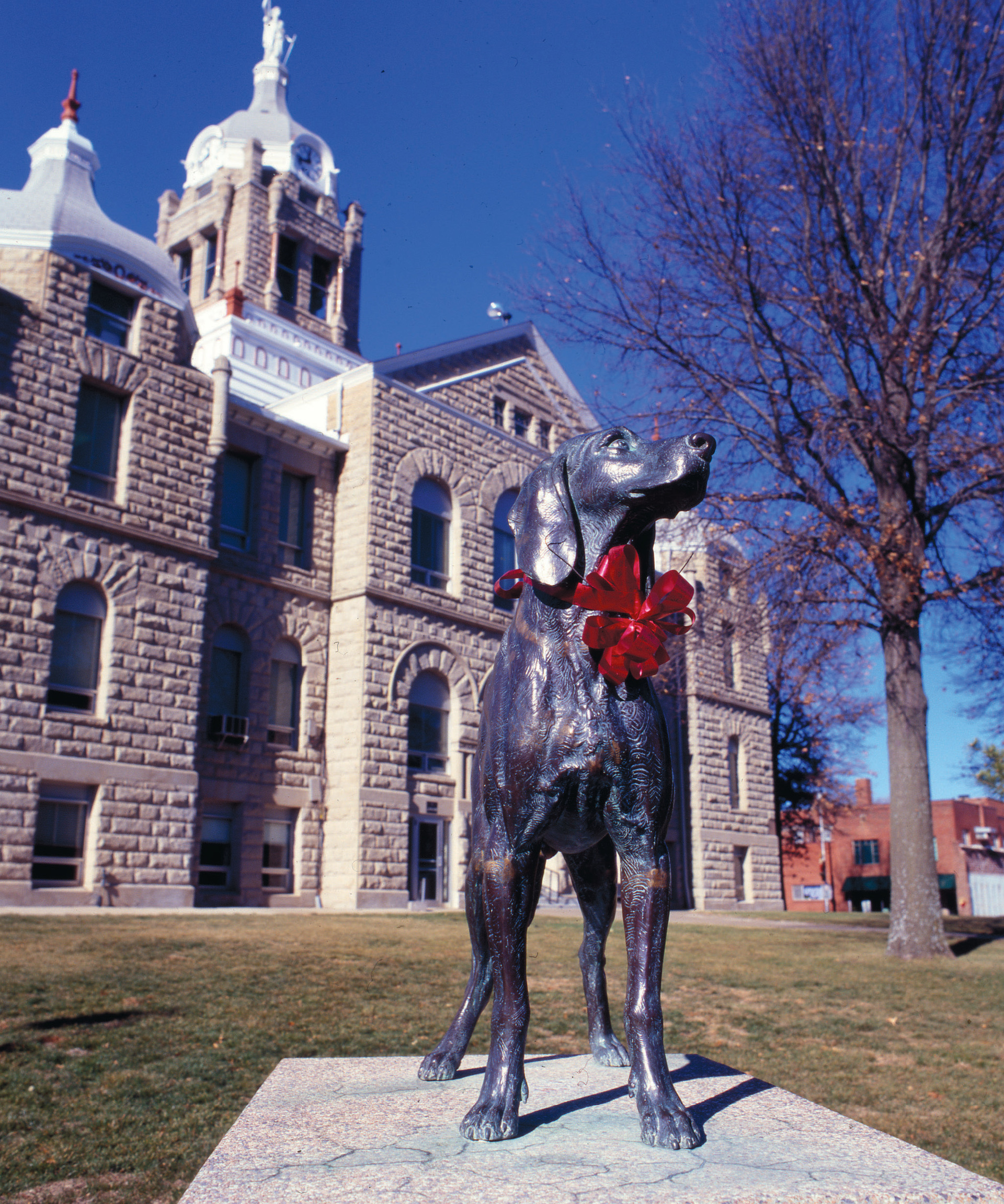 Editor’s note: This story, which is one of the most popular with our readers, is reprinted from the April 2014 edition of Rural Missouri.

On the lawn of the Johnson County Courthouse in Warrensburg stands a bronze statue of a dog. It depicts a black-and-tan hound named Old Drum, a dog not unlike any other owned by countless Missourians of the time.

How Drum came to be immortalized in bronze is the stuff of legends in this western Missouri town. His death in 1869 brought about one of the strangest court cases in history and involved some of the biggest names in Missouri politics.

The verdict would have been long forgotten if not for the closing remarks of one of the principals in the case, George Vest. From his speech came the concept of the dog as man’s best friend. It elevated a humble hound to celebrity status that is still remembered today.

“It resonates with everybody,” Kristi Eckfeld, Greater Warrensburg tourism director, says of the Old Drum story. “It doesn’t matter how old or young you are, everybody has that special dog that was important to them. You can go ask somebody in their 90s, and they can tell you about their favorite dog.”

She says Old Drum is known not just in Missouri but also around the world. In fact, the monument to him was one stop on a nationwide scavenger hunt.

Hoskins credits Missouri students for suggesting Missouri needed a state dog. “If this bill would pass, it would promote tourism,” he said at the time. “Anything we can do to draw people into these communities helps with the economy.”

The story of Old Drum began four years after the end of the Civil War. Farmers in war-torn western Missouri were just beginning to return their land to production.

For Leonidis Hornsby, that meant stopping wolves and stray dogs from killing his sheep. Hornsby had lost 100 sheep that summer, and he vowed to kill the next stray dog that appeared on his property southwest of Kingsville.

Hornsby, 31, was a small, wiry man with flaming red hair. He was known to be set in his ways. Once he made a vow, he stuck to it.

On the night of Oct. 28, 1869, his neighbor and brother-in-law, Charles Burden, returned home after taking care of business in Kingsville. Burden, then 44 years old, was born in Kentucky but had moved to western Missouri before the Civil War. He owned some prime farmland along Big Creek south of Kingsville.

Burden kept a pack of dogs for hunting. Of his many dogs, one was exceptional. Old Drum was five years old and thought by his master to be part bloodhound. He could track a man and was a terror to wolves and other varmints. But at a time when hunting put food on the table, Burden considered Drum to be the best deer dog he had ever owned. No amount of money would ever cause him to part with Old Drum.

On this day, Burden listened with satisfaction to one of his favorite sounds, the baying of his beloved hound leading the pack on the trail. Suddenly a distant shot rang out, and the joyful bays turned to yelps of pain that faded into silence.

Burden sounded his hunting horn. All of his dogs eventually answered the call — except for Drum.

Fearing the worst, and remembering Hornsby’s promise, Burden confronted his neighbor. Hornsby denied seeing Drum, but admitted he had told his nephew, Samuel “Dick” Ferguson, to load his gun with corn to scare off a dog instead of killing him. According to Ferguson, the dog yelped, jumped the fence and disappeared. He didn’t think it was Old Drum, having hunted with Burden’s dog before.

Burden said, “I’ll go and see. It may not be my dog. If it ain’t, it’s all right. If it is, it’s all wrong and I’ll have satisfaction at the cost of my life.”

Burden began frantically searching for Old Drum. Eventually, he found him, dead, with his head lying in the waters of Big Creek below Haymaker’s Mill. It was apparent to Burden the dog had been shot and then moved to the site. He had mud on his side and there were red hairs from a sorrel horse stuck to him. Hornsby owned a sorrel mule. To Burden, it was obvious who had killed his dog. 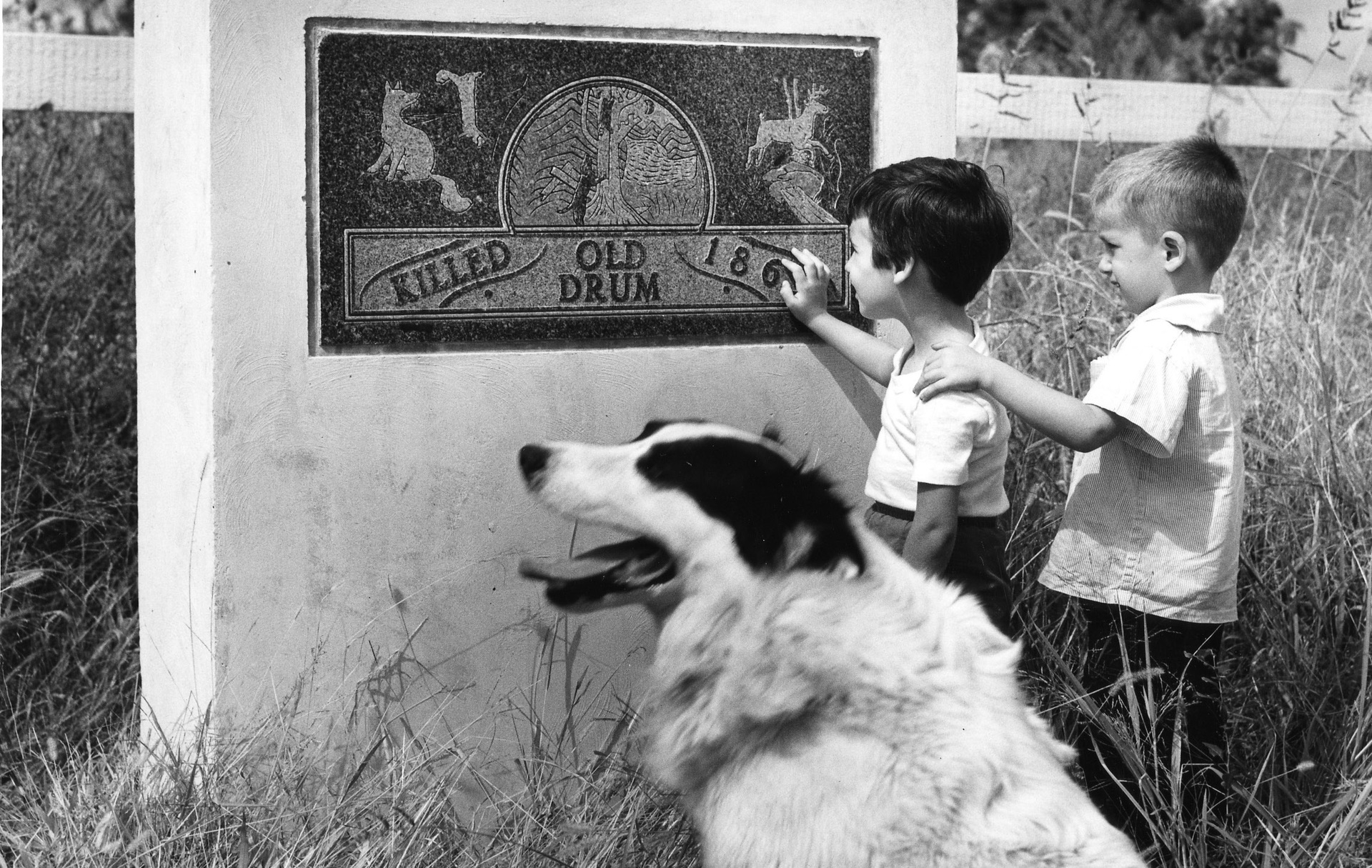 These boys and their dog visit the monument to Old Drum located not far from where he was killed on Big Creek south of Kingsville. The monument was built in 1947 by a Blue Springs man, Fred Ford.

He filed suit, asking for $100 in damages. A summons was issued commanding Hornsby to appear before Justice of the Peace Munroe in Madison Township on Nov. 25, 1869. The legal maneuvering quickly began.

Hornsby’s attorneys, Nation and Allen, filed a motion to dismiss the case because the amount Burden was demanding was beyond the jurisdiction of the justice of the peace.

Instead, Burden was allowed to amend his suit to the legal limit allowable, $50, and the trial moved forward. However, the jury was unable to reach a verdict, so the trial was rescheduled twice. On Jan. 27, 1870, a guilty verdict was returned and Burden was awarded $25.

The case wasn’t even close to being over. Hornsby appealed to the Johnson County Court of Common Pleas in Warrensburg. This time Thomas Crittenden and Francis Cockrell would represent Hornsby. George Elliott and Wells H. Blodgett were retained by Burden.

In the new trial held March 30, 1870, Hornsby and Ferguson testified that they removed lead bullets from Old Drum after the January trial in Kingsville. Their testimony raised doubts about whether Hornsby caused the death of Old Drum. Hornsby received a verdict in his favor.

But Burden wasn’t ready to quit. Citing new evidence that wasn’t available before, he filed a motion for a new trial. His motion was granted. Burden hired a new legal team consisting of John Philips and George Vest of Sedalia, along with his original lawyers, Elliott and Blodgett.

The legal minds pitted against one another have come to be known as Missouri’s “Big Four.”

While recovering, he defended a slave who was accused of murder. Despite being acquitted, the slave was lynched, and Vest was urged to leave town. Instead, he decided to stay and set up practice.

Vest fought for the Confederacy in the Battle of Wilson’s Creek. He also served in both branches of the Confederate Congress. Vest ran for governor in 1876, but his Confederate record doomed his campaign. He moved to Kansas City and was elected to the U.S. Senate where he would serve with distinction for 24 years.

One other lawyer involved with the case earned some level of notoriety. David Nation was married to hatchet-wielding Carrie Nation, one of the founders of the anti-alcohol Temperance Movement.

These heavy hitters would match wits on Sept. 21, 1870, when the case went to trial for the fourth time. The courtroom of the old Federal-style courthouse was packed. Locals had chosen sides. Threats had been made, and at least one prospective witness had disappeared rather than risk testifying.

The defense made the case that Drum was shot at Haymaker’s Mill by someone else. Hornsby admitted telling his nephew to shoot at a dog, but he denied that the dog was Drum.

According to a report in the Kansas City Star, “More oratory was turned loose than was ever heard in the most celebrated murder case ever tried in a Missouri court.”

As the case dragged on for two days, it appeared Burden would lose. But on Sept. 23, George Vest delivered the closing remarks on behalf of Burden and Old Drum. He stayed away from the evidence.

Instead, he would speak of dogs in the Bible, in the classics, in poetry. He spoke for an hour, then moved close to the jury and quietly delivered an extemporaneous speech that has gone down in history. (See George Vest’s eulogy to the dog below.)

When he finished, Vest sat down and even his opposing counsel knew the case was lost. There wasn’t a dry eye in the courtroom. Crittenden reportedly whispered to Cockrell that “the dead dog had won” and the two had better leave the courthouse before they were hanged.

It took the jury only two minutes to return a verdict in Burden’s favor, awarding him $50 along with $10 for Vest’s eloquent speech. One law journal referred to the case as “The most celebrated dog case in Johnson County, the state, or for that matter, anywhere in the world.”

The case didn’t end here, however. It was appealed to the Missouri Supreme Court, which affirmed the lower court’s opinion. On Sept. 18, 1872, Burden had his satisfaction after three years of legal wrangling.

No stenographer was present during Vest’s closing remarks. For years, the speech existed only in folklore and was known as the lost speech. The remarks reprinted here came from Crittenden’s notes.

It would take Burden and Hornsby years to recover from the expense of the long legal battle. Yet the two did not remain enemies. They were able to patch up their relationship and are buried close together in the Hornsby Cemetery south of Kingsville.

Drum would not be forgotten. In 1947, Fred Ford of Blue Springs built a monument to the celebrated hound on Big Creek, not far from where Old Drum was found dead. He received donations of money and rocks from dog lovers all over the world. These stones formed the monument’s original base.

The Old Drum Memorial in Warrensburg, which includes the words to Vest’s eulogy, was erected on Sept. 23, 1958. The old courthouse where the case was tried still stands at 304 N. Main Street in Warrensburg and is furnished as it was during the trial.

Those attending can hear the trial re-enacted in the original courtroom. There’s a 5K run, a dog show, live music, a Civil War film and much more.

Old Drum may be gone, but his memory lives on.

You can learn more about Old Drum on the Missouri State Archives website at
www.sos.mo.gov/archives/education/olddrum
.