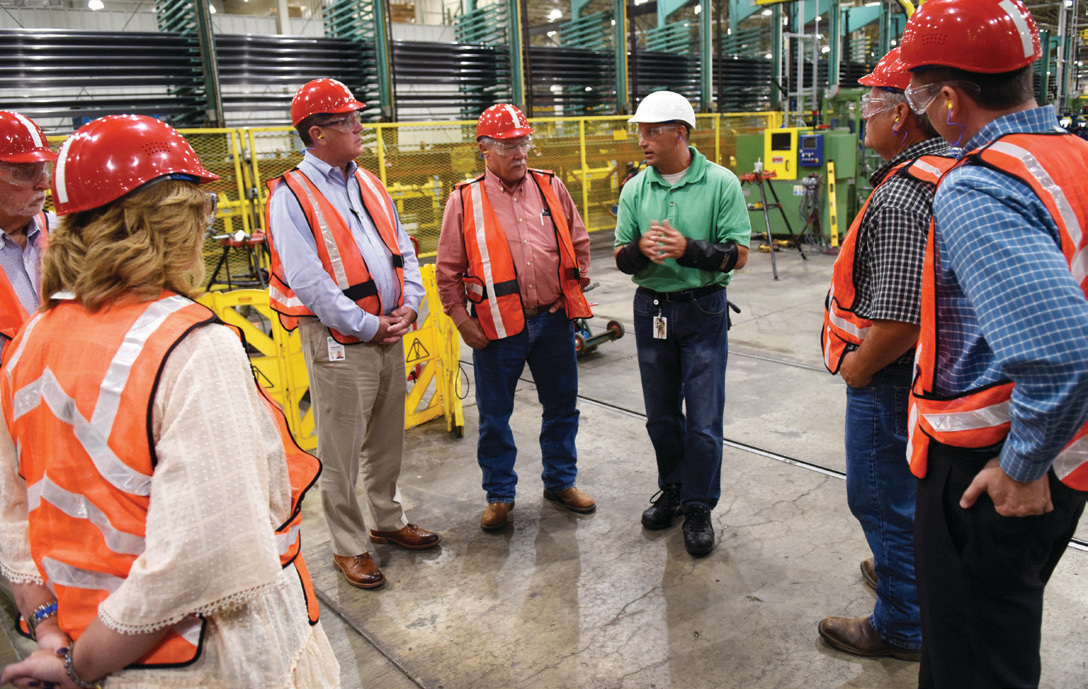 Neighbors banding together to help one another is the way of life in rural Missouri. At the community level that means joining forces to help drive economic development, increase average income and improve the quality of life. It’s all in line with the co-op principle of Concern for Community, which Howell-Oregon Electric Cooperative treats as a mandate.

Whether it’s educating schoolchildren and first responders on electric safety or helping homeowners and businesses determine the best ways to save on their energy bills, the co-op is dedicated to seeing its members succeed. That’s why Howell-Oregon is a partner in the Ozark Development Corp. which aims to promote the area and serve as a resource for businesses and industries.

“We’re proud to participate in the economic development efforts of our region,” says Howell-Oregon Manager of Member Services Myles Smith. “We’re always glad to see new or expanding business growth as it helps our members directly.”

Part of that plan is Heritage Business Park in Pomona, which the co-op has been instrumental in developing, leading and marketing since the regional industrial park was founded in the 1960s. Its growth and development over the years have directly impacted those communities that participate in it, which include West Plains, Willow Springs, Mountain View, Pomona and Howell County. Aiding the partners is a new economic development study undertaken by Wisconsin-based Ady Advantage for Sho-Me Power Electric Cooperative and its nine member electric co-ops. As co-ops and communities review the study to forge their best path ahead, those in Howell-Oregon’s service territory hope to continue their forward momentum. That includes improving infrastructure, namely efforts to limit damages caused by flooding that became apparent in the spring of 2017. These updates safeguard citizens and make the area more attractive to new businesses.

Locally, there’s a feeling the economy is on an upswing. From 2019–2021, West Plains is projected to see $155 million in investment from businesses and 181 new jobs. Ci^ Administrator Tom Stehn points to major employers such as Leonardo DRS, Ozarks Medical Center and West Plains Veterinary Supply as leading the way with expansions.

“The chances of getting new businesses, as far as manufacturing, in today’s world is very difficult,” Tom says, adding that getting a new company to take a look at rural communities is often the first hurdle. “Every community in the U.S. and even outside of it are trying to get them, so one of the focus points is making sure existing businesses are happy and hopefully doing well enough to expand.” More progress of that kind can be seen in Willow Springs. City Administrator Beverly Hicks says expansions by Jasper Engine and Burlington Northern Sante Fe Railway Co. as well as the addition of a Love’s Travel Stop are signs the local economy is thriving. The area has added roughly 140 jobs since 2013, and city leaders hope that’s a trend for the future. Still, Beverly points out there’s always a challenge for small communities when budgeting for expansion while maintaining existing services.

“Every one of our departments is a service to the community that the citizens require, so it’s a balance of how and when to spend the money,” Beverly says. “We can’t access large grants because we don’t have the in-kind funding. We’re dependent on ourselves.”

On that front, Howell County made significant progress in 2018 when voters passed the county’s use tax, which collects sales tax from online purchases. In 2019, the use tax accounted for a $500,000 increase to revenue and is on track to best that amount before the end of 2020. With dollars for maintaining infrastructure and services coming in what the area needs now is a workforce. Two challenges found by Sho-Me’s regional study are a below-average labor participation rate and stagnant or declining populations.

“There’s a shortage of labor, that’s the big thing,” says Howell County Presiding Commissioner Mark Collins. “It’s hard to find people to go to work, but that also means there’s a job out there for people.”

Mountain View is making changes at the ground level so that when a new business comes to town it can put down roots. Voters passed a $6 million bond issue this year to improve sewer and water lines, and the city recently switched to remote metering for electricity — anticipated to save $150,000 annually. Businesses such as Walmart and McDonald’s are making renovations and additions. Signing those building permits is encouraging for Mayor Donnie Pruett: It’s a sign no major players plan to leave.

“We’ve had positive reactions to everything we’re doing, and we’ve got positive attitudes,” Donnie says of the town. “Eventually, it’s going to work out.”

As infrastructure and revenues improve and businesses expand, it seems some of the economic woes of 2008 are gone. With a solid foundation in place, communities have a chance for arguably the best qualities of rural America —a neighborly attitude and a strong work ethic — to do the talking for them when opportunity knocks at the door. That’s the sentiment between the partners in ODC.

“We’re each other’s biggest cheerleaders,” Beverly says. “We all know that the more business we do individually helps the entire community.”