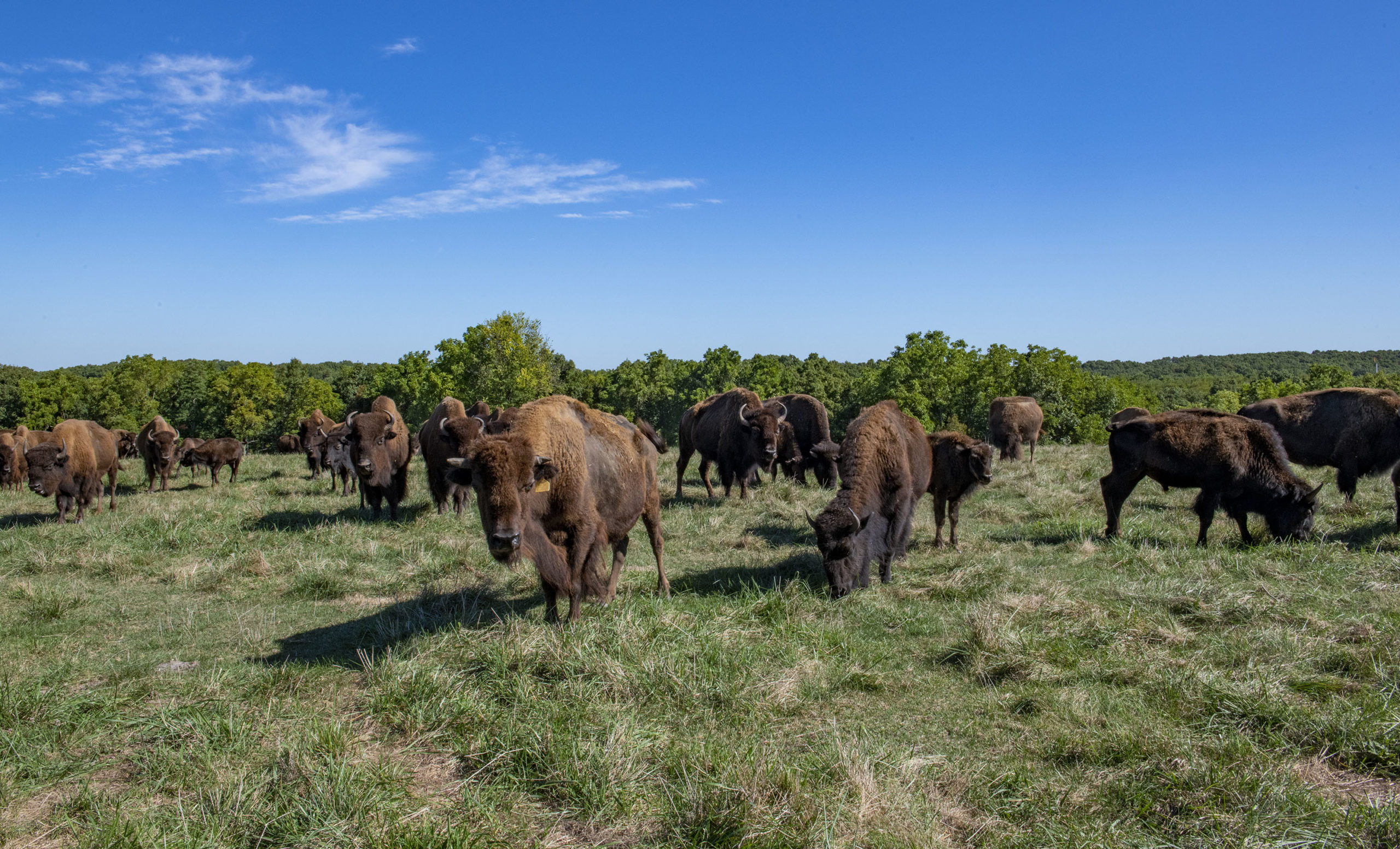 A symbol of the American frontier, a bull bison grazes a hilltop at Fort Bison Ranch near Ponce de Leon.

The American bison is a rare symbol of the United States that harkens back to a time when the animal was a main staple for Missouri’s pioneers and American Indians. Majestic and powerful in appearance, this animal won’t be seen by most people unless they go deep into the American West where a few herds still run wild. However, Missourians may simply drive down to the Fort Bison Ranch in Ponce de Leon. At this ranch nestled in the Ozark Mountains, Clarence “Sonny” Shannon raises a small herd of bison for a product that is growing in demand on the meat market.

At his day job Sonny is an executive account director in the cash management industry, but since 1998 he’s also had a passion for raising bison. It all started on a vacation when he and his wife, Melanie, stopped at a bison ranch in Seymour and tasted bison meat for the first time. At this point in their lives, the couple was looking for livestock to raise in their retirement years.

“We said, ‘Oh, golly! This is really good!’” Sonny says, “So we read about it, studied bison, and we said this is what we want to raise.”

From there, the White River Valley Electric Cooperative members picked their ranch’s location. Early on, they were drawn to the Ozark Mountains’ beauty and decided a ranch there would make a great place to retire. 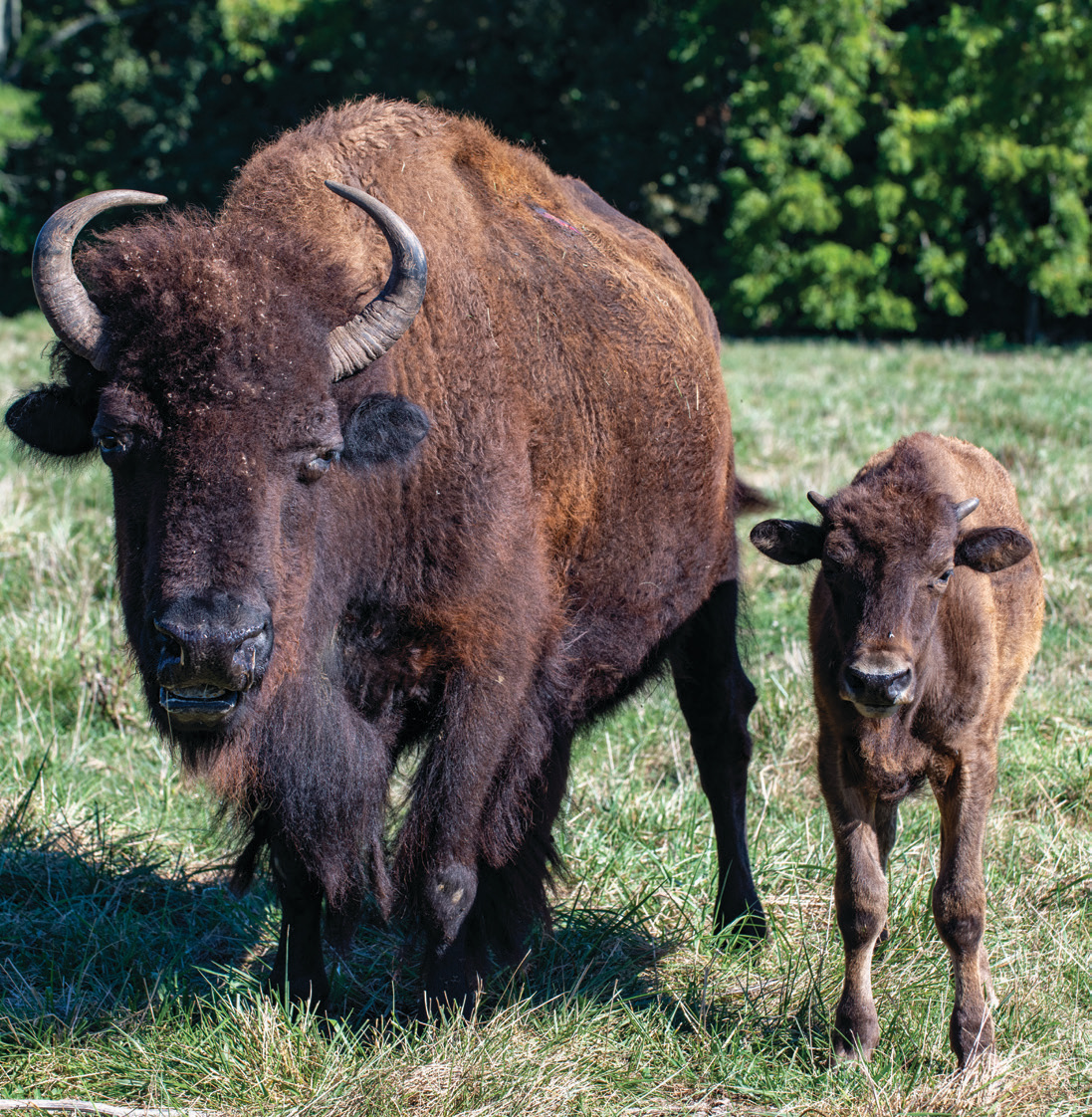 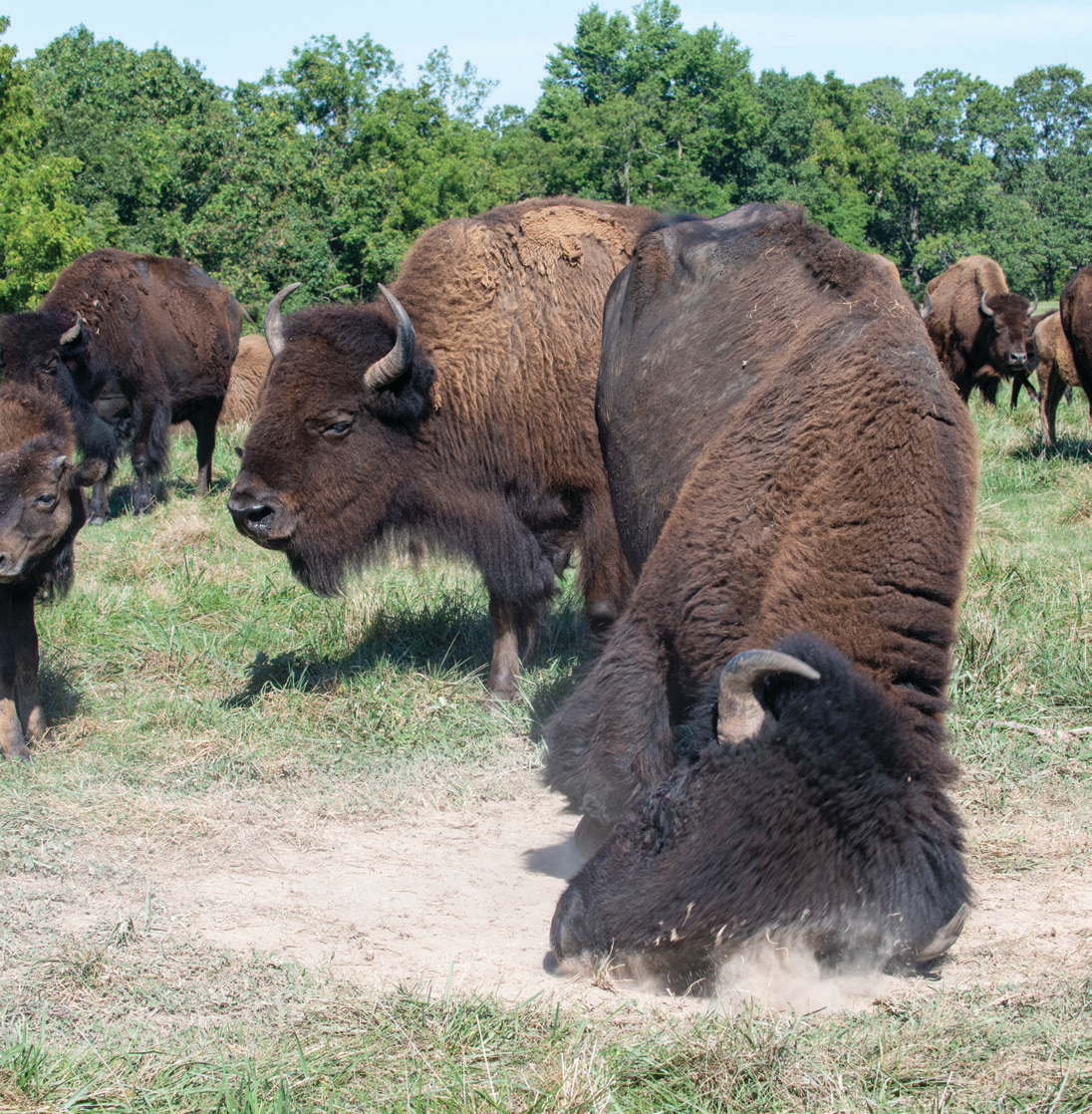 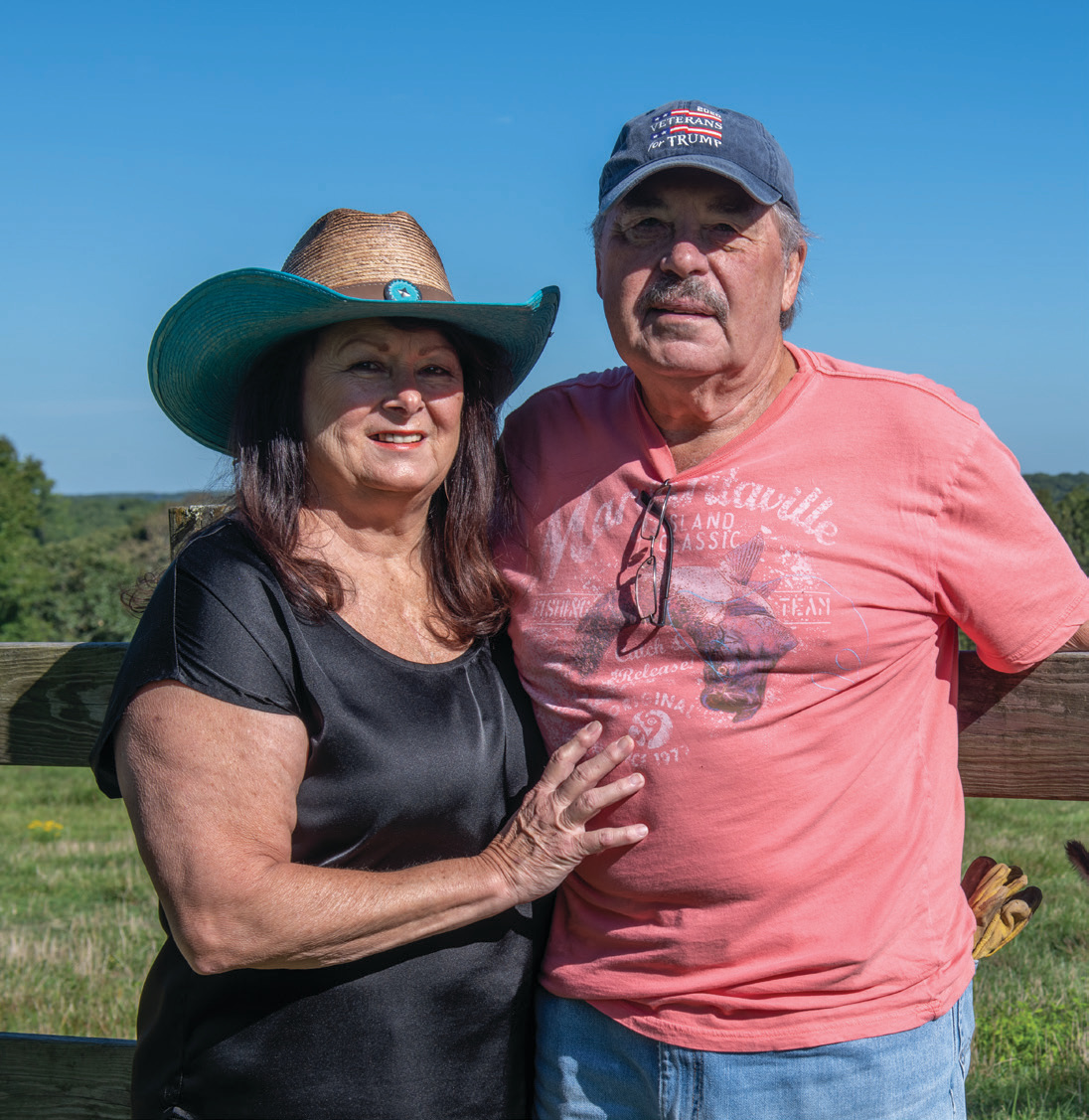 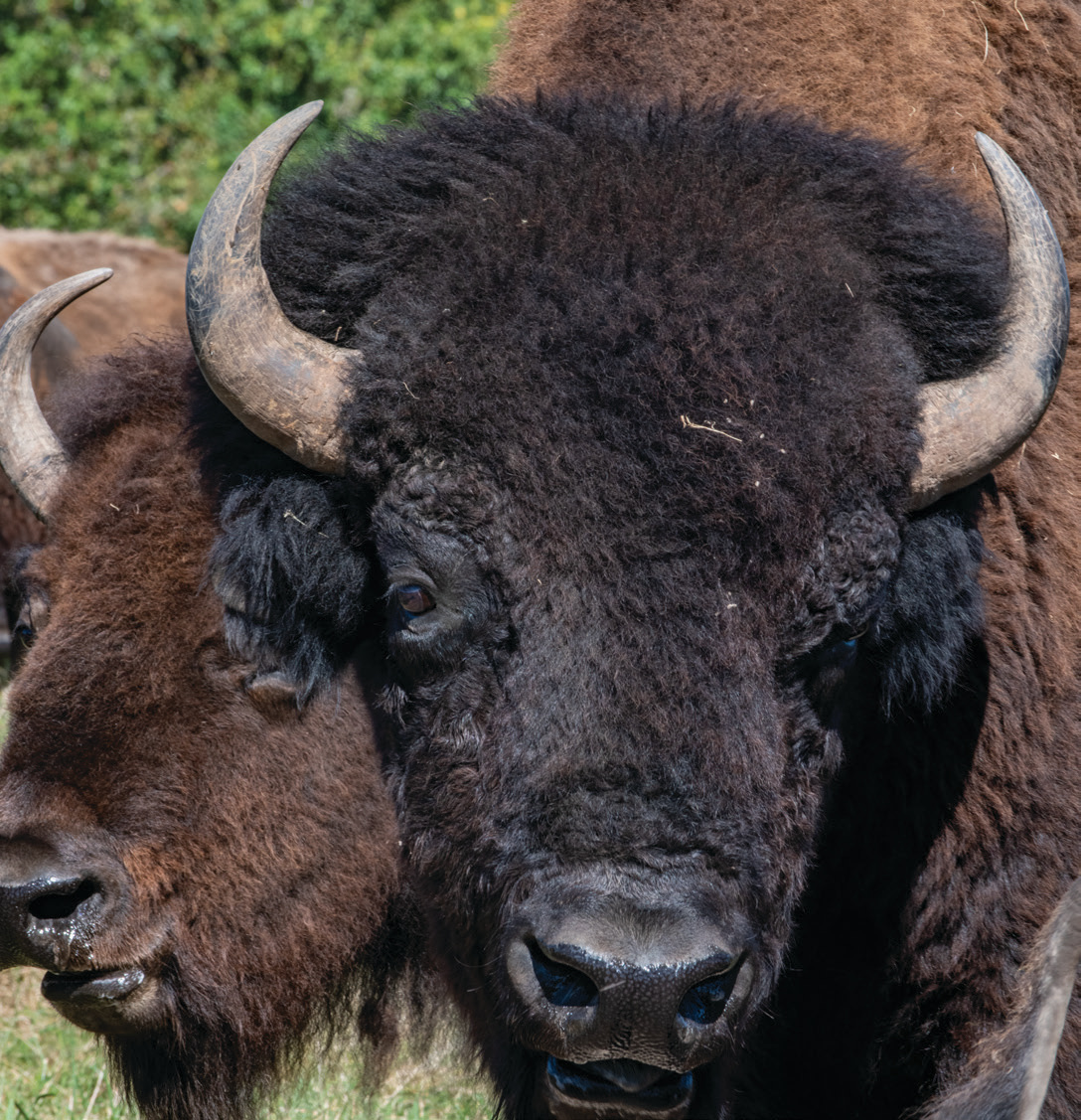 “In 1999, we found this place and kind of fell in love with the view,” Sonny says. “We’re on top of the hill up on Stone County. You’ve got a great view to the valley. That was one draw point. The ranch that was here was built in ’37 and was all Arkansas stone. It was kind of unique.”

Once they moved in, the Shannons started their ranch with 13 bison calves. By the early 2000s, they were able to start selling their bison meat. However, there wasn’t as much interest in bison then as there is now.

Sonny says that people, “had the idea that bison would be like venison — it would be gamy.” It took a while for him to convince people of bison meat’s superior quality.

“It’s much leaner,” Sonny says. “Beef is like 9.8 grams of fat per 100 grams of meat. Bison is 2.4. It’s so much leaner. It doesn’t have the marbling going through the meat. Some people say that’s a disadvantage because they like the fat in their meat. The meat is a little sweeter. It’s not greasy.”

Although Sonny eventually expanded the bison market in his area and most people are now aware of bison meat’s health benefits, the market still has a problem — availability. While the North American Meat Institute says America processes 32.2 million cows per year, there is only an estimated population of 30 to 60 million bison in North America. Only a small portion of that is raised by ranchers with the intention of selling meat. At Fort Bison Ranch, Sonny and Melanie sell ground, grass-fed meat as well as bison steaks, roasts, patties, breakfast sausages and multiple flavors of bratwursts.

Another complaint Sonny notices for the bison market is that most ranchers are uneasy about raising bison.

“I think it is that they are afraid of the animals, or they don’t understand the animal or want to deal with the animal or whatever,” Sonny says. “I think there is a fear that they are aggressive and they would be too hard to handle. There are people who say you have to have really special fences, and I say, ‘No you don’t.’ If a fence is there, they won’t challenge it.”

Over the years, Sonny has discovered many winning attributes that he believes make bison easier to raise than cattle.

“They really have no problem calving,” Sonny says. “It’s pretty quick. (The mother is) having a calf, and the calf is standing up in like 10 minutes.”

Sonny also relates that he can medicate bison easier than cows. Often large livestock have to be restrained while being medicated, but Sonny says that he does not want to hurt his animals by putting them in a squeeze chute for medicating. “They get upset and hurt others and themselves,” he says. Fortunately, he solved this problem of giving bison their medicine long ago with a little basic logic. “I pour it on their feed when I give them treats,” he explains.

One of the most useful things Sonny has discovered in bison is their grazing patterns. Many cattle ranchers rotate their animals so they don’t overgraze their pasture, but Sonny says, “They do a fantastic job of rotating themselves.

I have two 40-acre plots, and they just constantly move from one variant to the next.”

The only problem Sonny has experienced in raising bison is that they need strong corrals for roundups. This is probably the most dangerous part of Sonny’s job as the bison do not appreciate being enclosed and may act out against their enclosure. Sonny says it is a scary thing when a bison swings its head at him. But if he backs away, that is usually as far as the bison goes. “They’re not that difficult to raise at all,” he asserts. “They’re difficult to handle, but if you’re patient and you’re smart and don’t do something stupid, they are not that difficult to raise.”

Another aspect of raising bison that Sonny enjoys is supplying a product that is helpful to many people. Besides being a heart-healthy meat, bison may be an alternative for those with beef allergies. Though this attribute in bison meat hasn’t been properly researched yet, many bison farmers, including Sonny, have reported that people with beef allergies will buy bison meat products as an alternative to beef.

While Sonny likes providing this useful product and believes bison are easier to raise, he knows that raising bison is not a venture to take lightly.

“They are a wonderful animal. They are a curious animal,” he says. But he emphasizes, “They are not pets.”

Still, he adds, “If you like red meat and you want to eat healthy, I would say it’s the best product out there.”

For years, the Shannons have sold their bison meat to Mama Jean’s Natural Market stores and customers who drop by the ranch for a visit, but Sonny knows that someday he will need to pass the business he has pioneered to the next generation. His daughter has already volunteered to care for the animals when Sonny no longer can. However, Sonny wants to maintain his passion for raising American bison for as long as possible.

“I love to see them out there in the field,” he says. “I don’t know if it’s my sentiment to America, but they just look American and so majestic and unique.”

Fort Bison Ranch is open by appointment. For more information, go to www.fortbisonranch.com or call 417-357-1920.