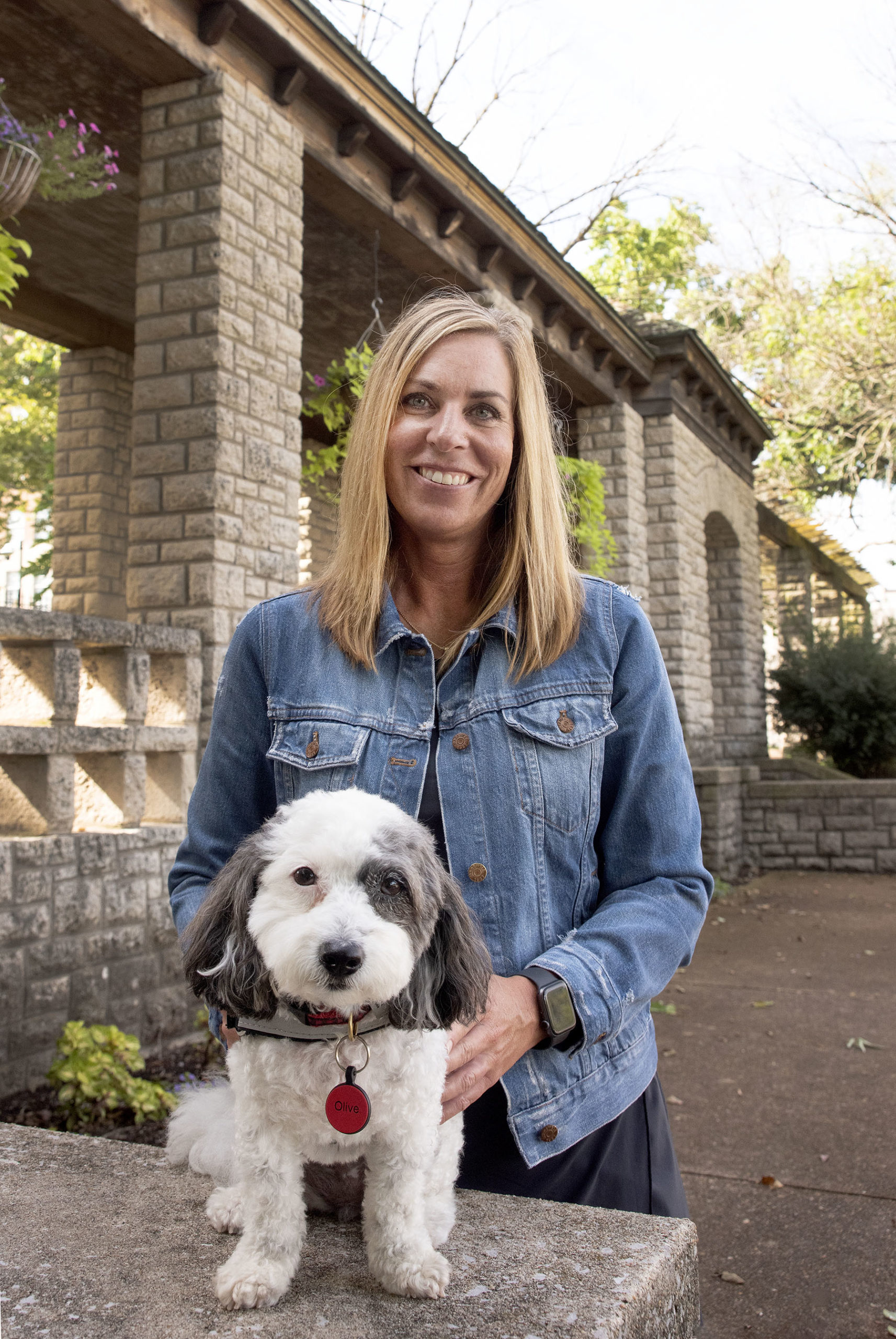 Without a sound, she’s by your side gazing up at you. As you sit at the table, the furry greeter quietly hops up in the chair beside you and pleads with big brown eyes to be invited to sit.

“Olive will work her way onto your lap and into your heart before you know it,” says Lisa Groves Bax, Olive’s owner. “That’s actually a big part of her job.”

The 7-year-old poodle mix and Lisa are currently Missouri’s only canine Court Appointed Special Advocate team. CASA is an organization of child support volunteers who advocate for abused or neglected children in the judicial system. Olive, the first four-footed volunteer, works with Lisa on the cases she’s assigned by the circuit judge. Olive’s job as a certified therapy dog is to be a calming distraction to children of any age in court situations.

“Olive offers a friendly face for the children who need stability during the trying times they’re facing,” Lisa says, adding, “She also offers unconditional love, something everyone needs.”

Lisa, an office administrator for a Jefferson City law firm, has been a CASA volunteer for four years. As a child advocate, Lisa wanted to add another level of comfort for the children she works with. As a fan of the CBS television show “Lucky Dog,” she began contacting the show’s producers with an idea of training a rescued dog to help her in court. After months of persistent outreach, Lisa’s phone finally rang and she found herself speaking to the show’s host and animal trainer, Brandon McMillan. 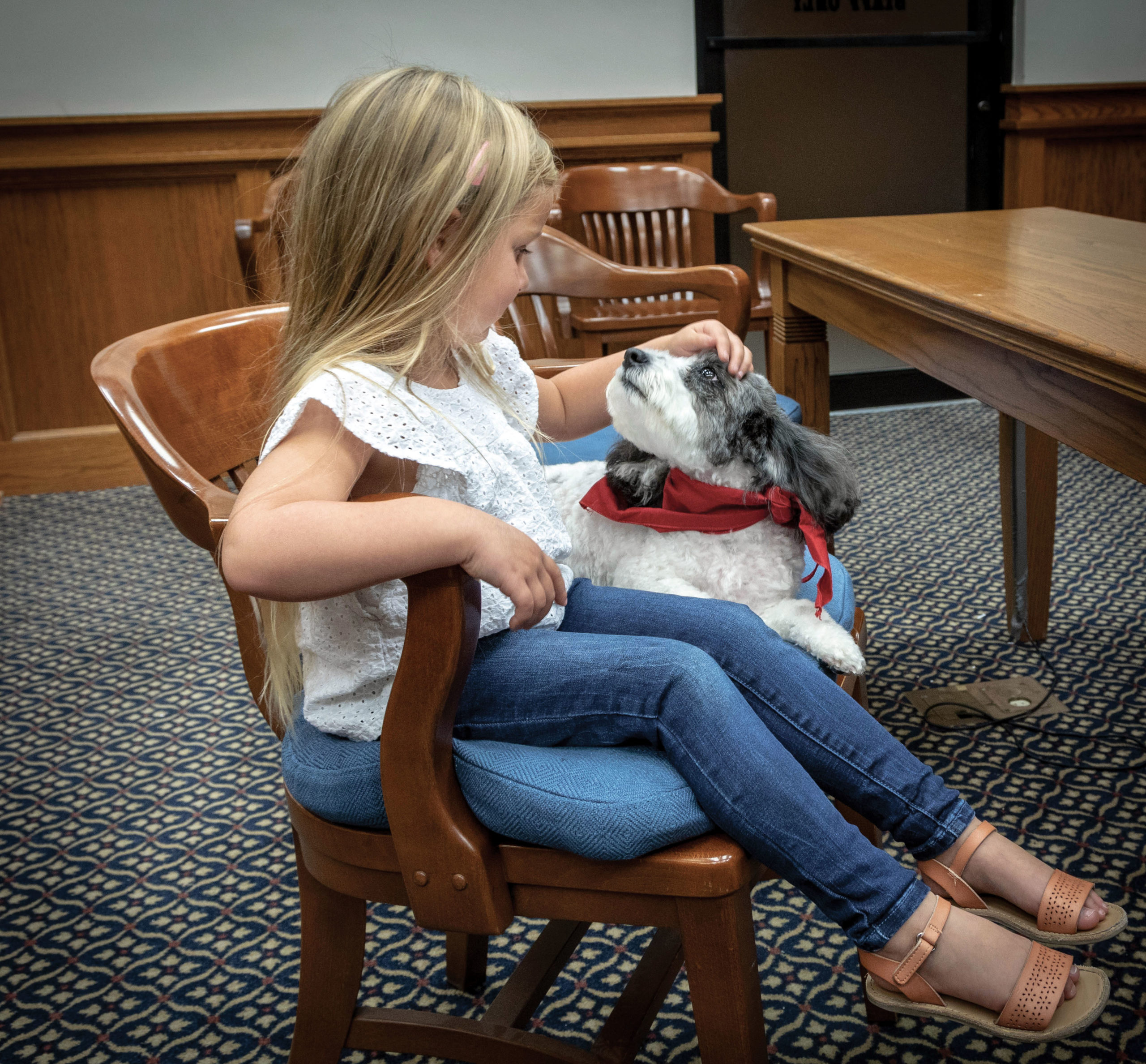 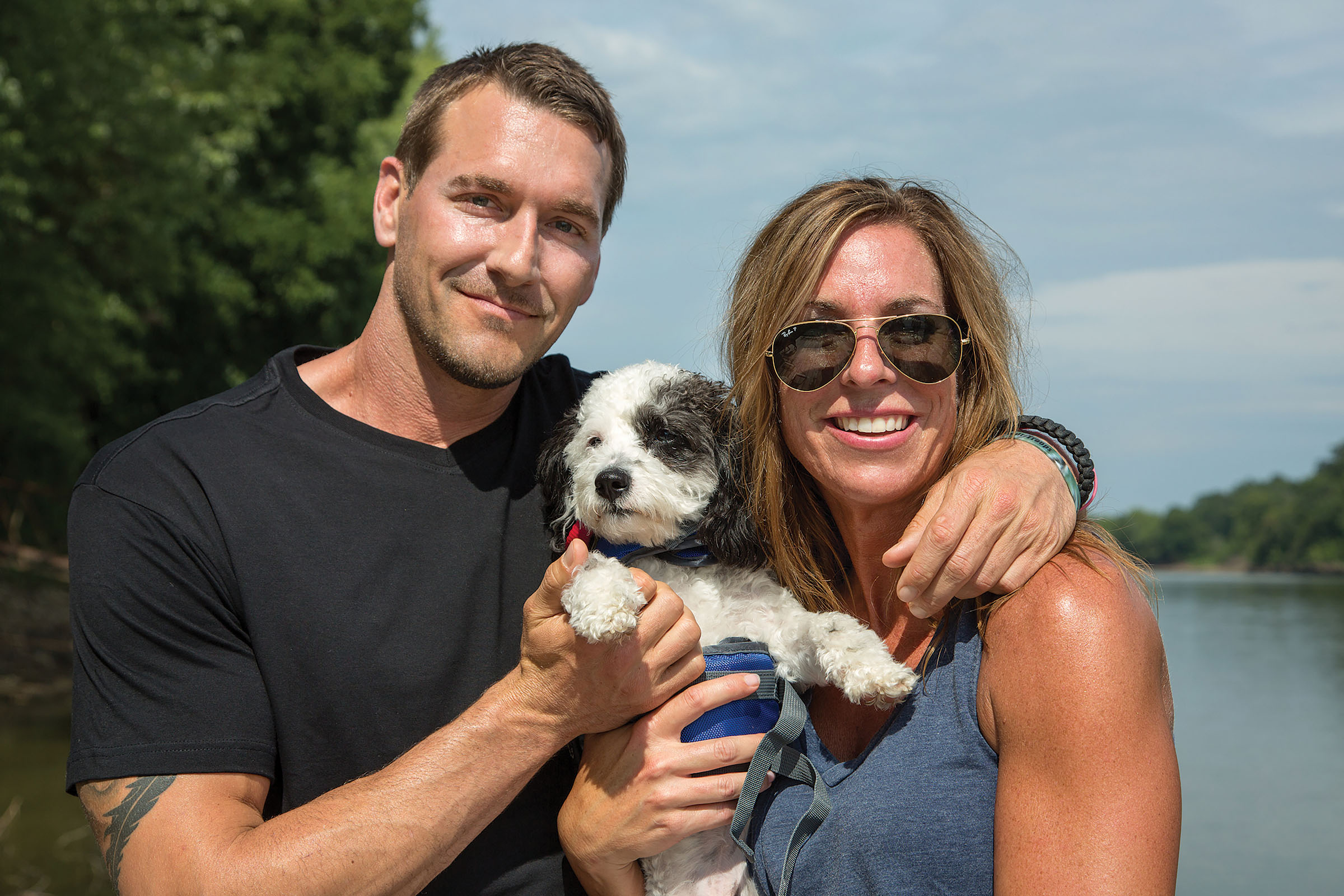 “Brandon asked me to tell him more about what a dog would be doing with me on the job,” says Lisa. “By the end of the conversation, he knew I needed a hypoallergenic dog and a small breed that would be more like a teddy bear than a giant.”

A couple of weeks later, Brandon called Lisa and said he had a young dog he’d rescued six months before which was likely a perfect match for Lisa and the mission of CASA.

“Before she ended up in a shelter, Olive had been living on the streets of Los Angeles,” Lisa says. “Brandon said she was emaciated and had recently had pups, but no pups were found.”

With Brandon’s training and care, the gentle poodle mix was ready to be loved and to love someone else again. She came to her forever home in July 2016 and began working with Lisa in court in August.

“To date, Olive and I have worked with a little more than 300 kids in Missouri,” says the CASA volunteer. “Obviously we’ve done most court visits virtually this year since the court hasn’t allowed in-person hearings. But we’re still there for online hearings with children or whatever else is needed.”

The volunteer says once the judge assigns her and Olive to a case, they’re with the child until the case is settled or they reach the age of 18.

Kids often have their lives turned upside down when they are brought into court. Without advocates like Lisa and Olive, they have no one else to turn to.

Most of Olive’s work is done out in the courthouse hallway, where she patiently waits with the children. She helps them relax before heading into the often scary courtroom.

“Olive seems to have a sixth sense when it comes to kids,” Lisa says. “If she hears a baby cry, she’s on the hunt to see what’s wrong. She’s just drawn to them.”

Earlier this year, Olive’s work with CASA got her nominated in the Therapy Dog of the Year category for the American Humane Hero Dog Awards. After nearly a million votes were cast by animal lovers all across the United States, Lisa and her husband, Danny, recently learned Olive was one of the seven remarkable dogs to be named as finalists. Dog lovers everywhere voted online until mid-September, when voting was closed. A two-hour special broadcast on the Hallmark Channel is slated to air this fall as part of the Adoption Ever After initiative to help shelter pets find forever homes. That’s when the overall 2020 American Humane Hero Dog Award will be announced.

“The network has already filmed Olive in action, but we won’t know the winner until October,” Lisa says.

Whether she takes the award as the 2020 Hero Dog or not, Olive has won the hearts of many across Missouri and the nation.

“Our mission is that no child ever walk through those courtroom doors alone,” Lisa says, giving Olive a hug. “If we can be a constant in their life, then we’ve made a huge difference to that child.”

How can I help?

Volunteer to become a Court Appointed Special Advocate! They’re needed all across Missouri.

To watch a video about how to become a CASA volunteer, go to youtu.be/Y1R9nI-mZd4.

For more details on what it takes to be a trained CASA volunteer, check out www.capitalcitycasa.org/volunteer or call Capital City CASA at 573-893-2272.