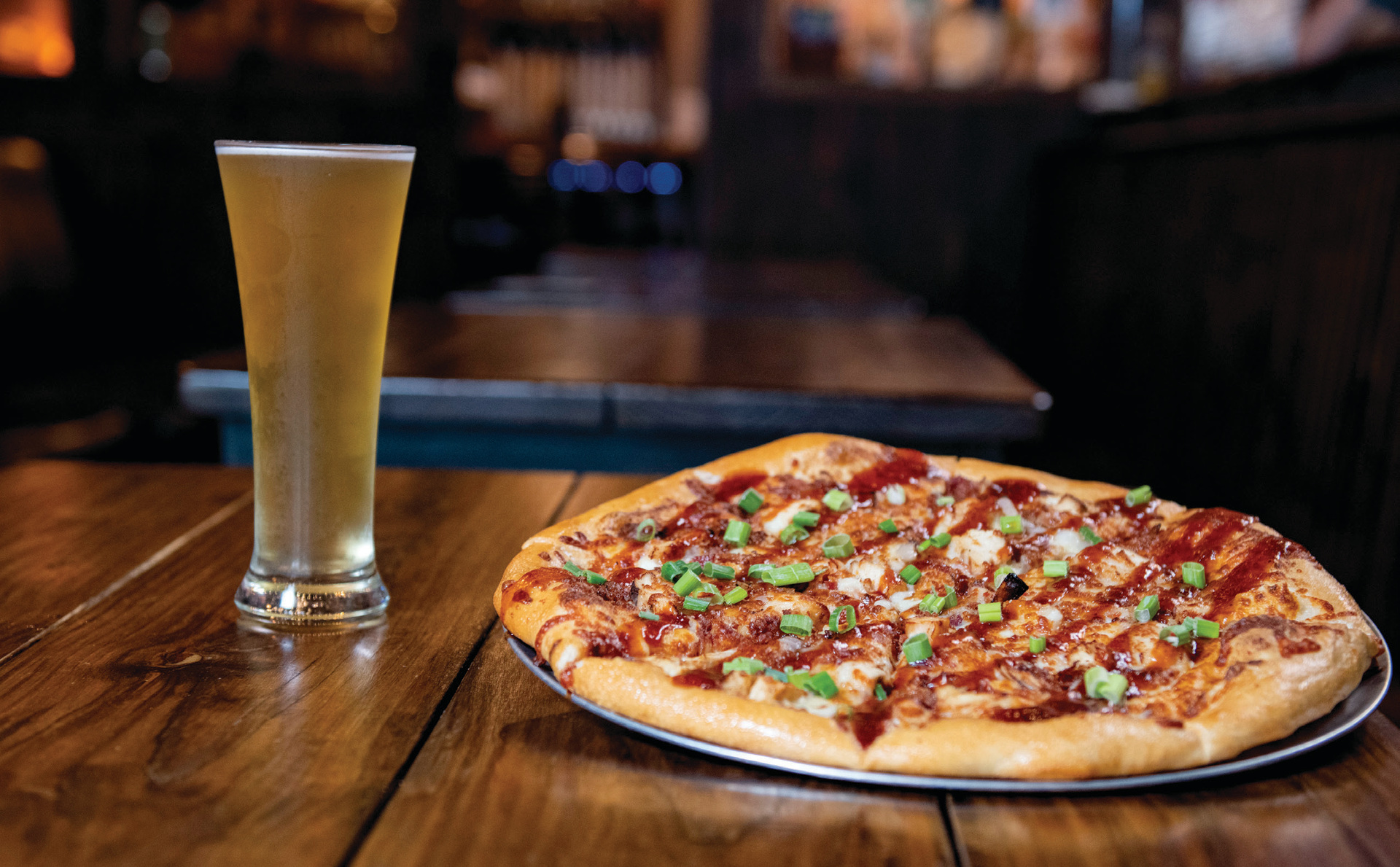 It was supposed to just be a small microbrewery. Joe and Abbie Backes knew that people were willing to travel to visit breweries, wineries and distilleries and wanted to bring one to their hometown of Carrollton. “I knew how to make beer and everyone seemed to like drinking it,” Joe says.

As the couple began to put a plan together, they realized that Joe’s delicious beers couldn’t be the sole driver for a business. There had to be food as well. What to focus on wasn’t a hard decision. “What goes better with beer than pizza? Now we’re a restaurant that just has really good beer,” Joe says.

The couple opened the doors to River Bottoms Brewing Co. in September 2017 and serve up unique appetizers as well as a mix of classic and eye-opening pizzas. Their food is sourced as locally as possible and pairs well with one of Joe’s beers that are brewed on-site on the Carroll County square.

After living in nearby Kansas City for 15 years, Joe and Abbie were eyeing a move back home to raise their family. “We wanted our children to grow up in a small-town farming community in the country. When we grew up there was a little shop or pharmacy in every building on the square,” Joe says noting that wasn’t the case when they moved home. “We saw potential for improvement in the community and wanted to do something to help revitalize the town we grew up in.”

When creating the menu, they knew that pizza would give them plenty of latitude for different options. “We wanted to do traditional pizzas like pepperoni or Meat Lovers,” Abbie says. “But we knew we could do some unique specialty pizzas as well that you won’t find at other places. We started experimenting a lot at our home.”

“It’s fun to eat. It comes out and the whole family can grab a slice,” Joe says. “If you do it right, it’s delicious. You can make almost anything into a pizza.”

Those words are most exemplified with their Peanut Butter & Jalapeno Jelly with Bacon pizza. The flavors’ roots are in a hamburger the owners had on a trip to Arizona. They thought it would translate well into a pizza.

The base of the pie is a blend of peanut butter and ricotta cheese topped with a five-cheese blend. Next comes the bacon and sweet jalapeno jelly and it’s covered with mozzarella cheese and sent through the pizza oven.

“People are hesitant to try it at first, but once they take a bite they never regret it,” Joe says. “It’s almost kind of buttery with the cheese and peanut butter coming out. They mix together quite well.”

If that is a little too adventurous for you, there are a dozen other — much tamer — options from which to choose. Classics such as the Supreme, Margherita and Veggie Lovers all feature River Bottoms’ house-made red sauce as a base.

For a sweet and savory pizza, go with the BBQ Chicken. The dough is blanketed in the house-made white sauce — a combination of ricotta, heavy cream, garlic and pepper — and piled high with the cheese blend, barbecue chicken, bacon, onions and mozzarella. It’s topped with chives and drizzled with Big D’s Sweet Barbecue Sauce, made just down the road in Norborne.

“The sweetness of the barbecue shines through and goes well with the chicken,” Joe says. “It’s quite delicious.”

Abbie says the extra steps and attention to detail keep bringing in hungry patrons. “I think a lot of it is our presentation,” she says. “Almost all the pizzas have some sort of drizzle on top with chives or some kind of topping. It’s a pizza that’s specially made to order.”

Pizza toppings at River Bottoms are available in a few unique ways. If you’re by yourself, you might want to pass on the 14-inch pie and go with a calzone. If you’re all in on pizza toppings but not on carbs, try their keto-friendly Pizza Peppers. Bell peppers are sliced open and used as a vessel for the pizza sauce, toppings and cheese. Joe’s favorite is the Buffalo Chicken, which features the white sauce, cheese blend, buffalo chicken, bacon, red onions, peppers and mozzarella. After baking in the oven, the peppers are drizzled with buffalo sauce and ranch.

“It’s a unique experience,” Joe says. “Almost like eating a chicken wing stuffed inside of a pepper.” 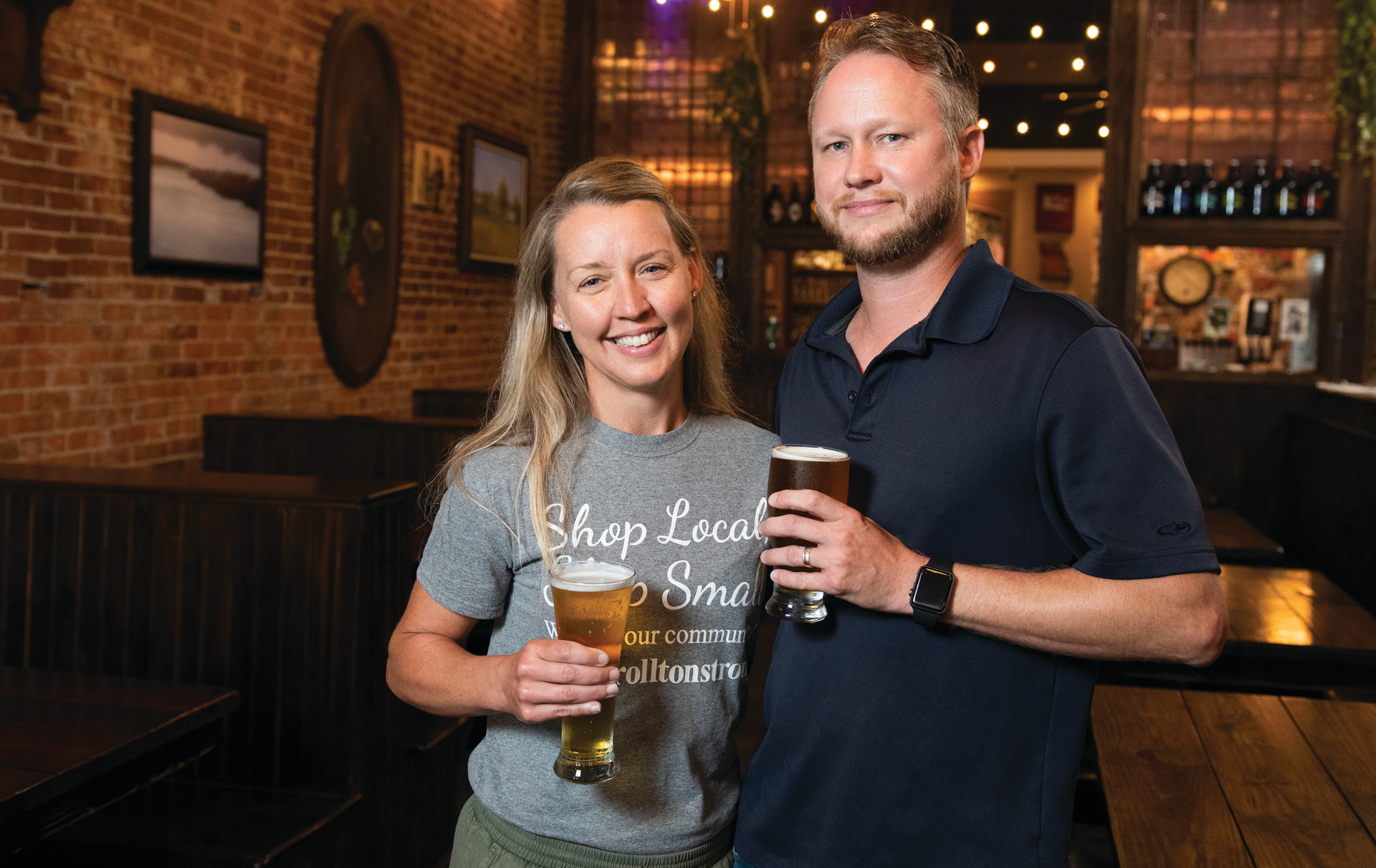 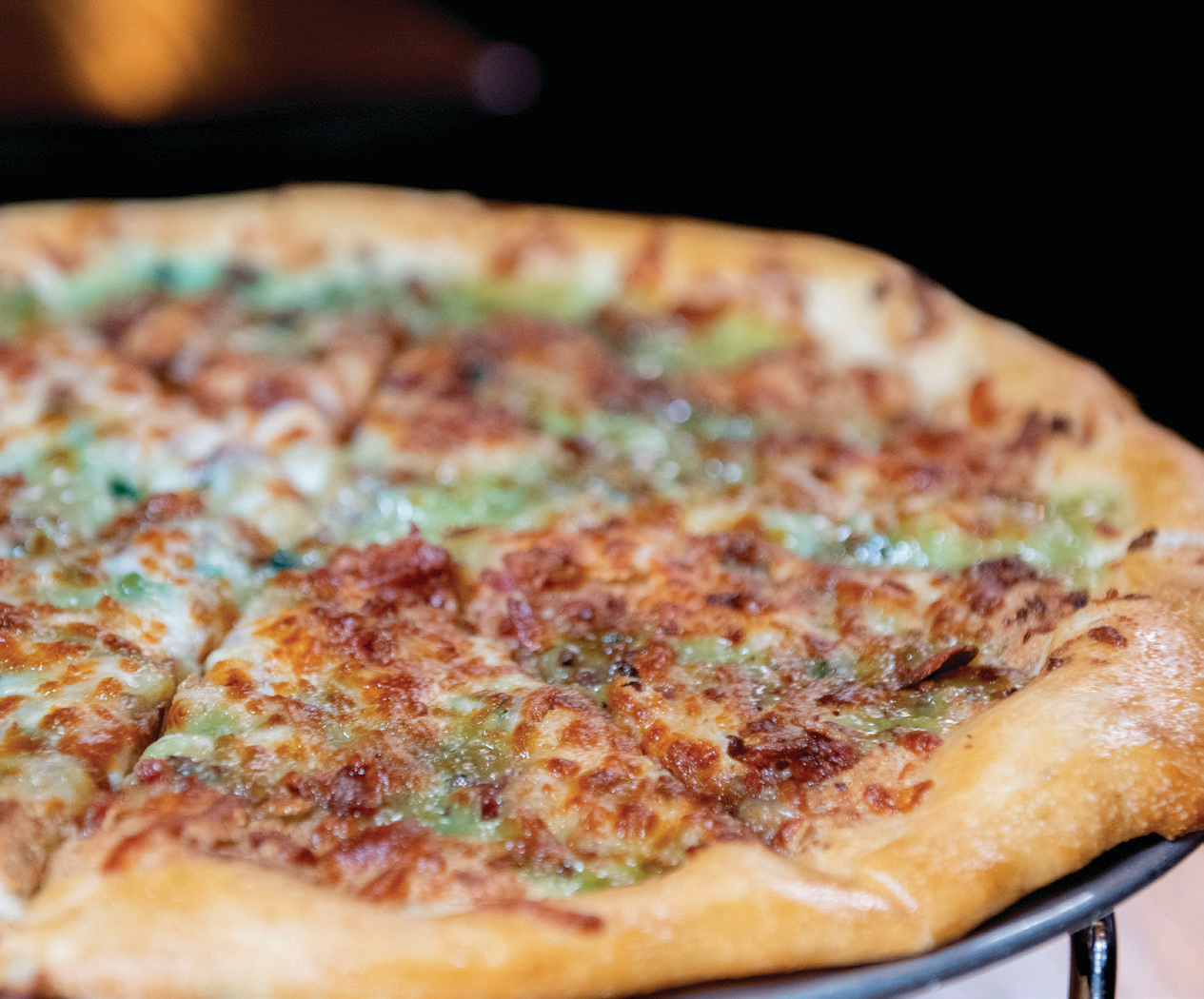 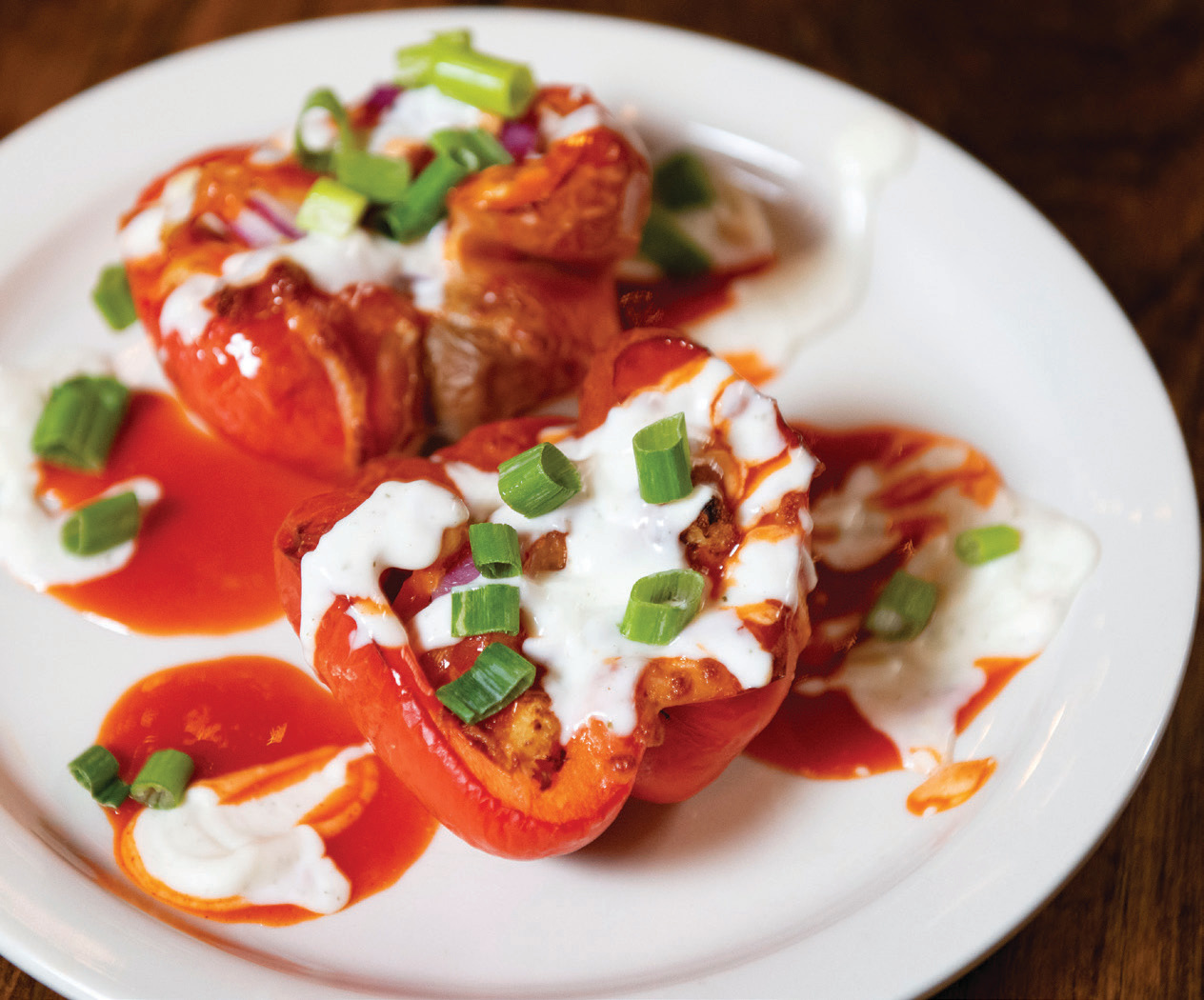 They also feature Pizza Nachos where all the toppings are placed on a bed of tortilla chips and cooked in the oven.

While the pizza is the mainstay of the menu, it’s not just the food that is bringing in customers. River Bottoms has a 5-barrel brewhouse allowing them to brew enough for about a dozen kegs at a time. From the classic pilsner to an oatmeal stout to Beligian-style tripel, Joe’s got something for you.

“We didn’t want an ever changing list of beer,” he says. “We wanted to have our flagship beers that we make consistently.”

The most popular brew is the Pre-Prohibition Pilsner. The light beer is a traditional German recipe from the 1800s. It’s lightly hopped and lagered for six weeks. “It’s really drinkable,” Joe says. “I tell people this would’ve been the grandfather of what Budweiser became.”

If you’re having trouble choosing, opt for a flight of four 5-ounce glasses to wash down your pizza.

With live music on the weekends and pizza flying through their oven, Joe and Abbie say they’re proud to be part of their community.

“We’ve got our cozy ambiance in our historic building, good food and good beer,” Joe says. “It makes you feel good to add value to our hometown. You feel like you’re not just living here, but you’re contributing.”