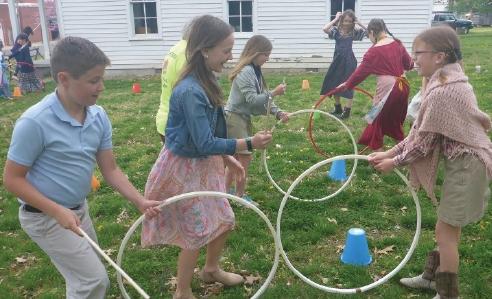 Frances Harvey will never forget that day at Mound School. Her teacher, Mrs. Pfister, had asked Frances and a schoolmate, Gayle, to get coal for the stove. Taking the bucket, Frances and Gayle went outside. When Frances filled the bucket, Gayle promptly kicked it over. Frances refilled the bucket. Gayle kicked it over. After gathering the spilled coal a third time, Frances got mad and said, “If you do that one more time, I’m telling the teacher.”

“We carried it in and when I entered the room, they started singing ‘Happy Birthday,’ ” Frances says. “They had cake and everything.”

Mound School near Urich was one of 104 one-room schoolhouses that once served children in rural areas and villages of Henry County. Most were phased out in the 1950s, but the experience lives on through the Rural School Immersion Program. The program is offered mid-April through mid-October by the Henry County Museum and takes place in the historic Highland School, which was built near Calhoun in the 1880s. It was moved to the Henry County Museum grounds in Clinton during the 1990s.

“The emphasis is on the historical aspects of early-American education in a one-room school,” said Connie Grisier, head of museum programs for children.

Funded by the museum’s Children’s Corner and a grant from the Truman Lake Community Foundation, the immersion program offers the chance to experience what it was like to be a student in a one-room school. The school day begins with the teacher ringing the bell to summon the students, then called scholars, to the flagpole. Following the flag-raising ceremony, the children line up and file into the building, taking their seats at wooden desks. Lessons are centered on the three Rs, as they were known — reading, ’riting and ’rithmetic. Students use McGuffey’s Readers, slates, and quill and ink for penmanship, according to Connie.

Students can bring lunch from home in pails they make in class as a previsit activity. Then there’s recess with old-fashioned games and activities, such as jump rope. Afternoon lessons include grammar and spelling. When the bell rings at the end of the day, the scholars also have had a lesson in the manners and discipline required of students in the 19th century, when education was a privilege, not a given, and the ‘board of education’ hung on the wall. Attendance is limited to 28 students. Three to four adults are required for supervision, which is a great way to involve parents or grandparents, says Connie.

“They were expected to sit still and obey the rules,” Connie says. “Children who did not follow the teacher’s rules were punished at school and quite possibly again at home by their parents.”

One storied aspect of one-room schoolhouse days today’s scholars are likely to miss out on are the walks to and from school. A country girl born and bred, Frances attended one-room schools from first through eighth grades, first at Mt. Carmel, then at Mound School. She walked to school in all weather, she recalls, a distance of a mile-and-a-half one way.

Early one-room schools were built using a subscription method, with families paying an assessment, then funded by taxes when rural areas were authorized to form school districts. According to one listing, Benton County had 68 one-room schoolhouses, which also served as churches, community halls and polling places. When school districts consolidated in the 1950s, the schoolhouses deteriorated from lack of use. Most were eventually demolished, or in some cases, burned down.

Now, only the name of a road, such as Prairie Grove or Cottage School roads, mark their existence. But for Frances and her schoolmates, the friendships and the memories remain, such as the day Gayle kicked over the coal bucket.