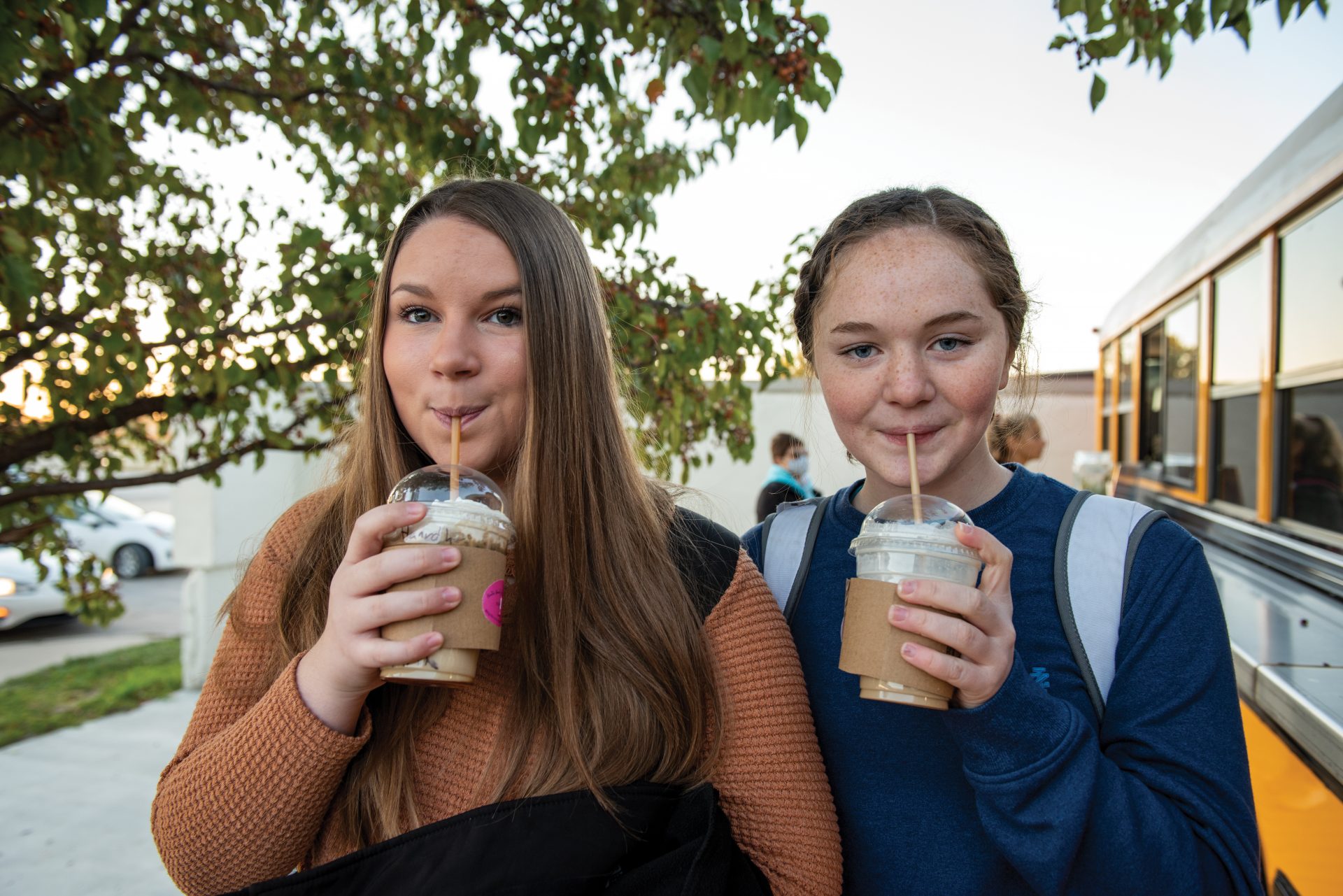 In March, the Knox County R-1 School District made history, welcoming Missouri’s first electric school bus to its fleet with help from Lewis County Rural Electric Cooperative. Part of the grant funding agreement for the project required taking one diesel bus out of commission.
With the old bus being dismantled, a Knox County R-1 school board member suggested maybe the school could give it a new life.

“The business education teacher had been asking me for three years if she could cut a hole in the concrete wall so her students could have a store and simulate business situations,” says Superintendent Andy Turgeon. “The bus was the perfect answer to that request.”

The superintendent processed the needed paperwork. through Missouri’s Department of Natural Resources, requesting permission to repurpose the bus for the project. With approval, the project began rolling along.

“I told my class Mr. Green and his students were now the contractors and we were the customer. We wanted this to be as much of a real-life situation as possible,” says Brandi, who is in charge of guiding the students with the business end of the project.

While the industrial tech students gutted the bus, repainted the shell and changed out windows, the business class began configuring what the inside of the bus should look like to run an efficient coffee shop.

“We made cardboard cutouts of every appliance and used them as we figured out where a grill, refrigerator, oven and coffee machines would fit,” Brandi adds, noting the students also needed to include space for several employees who would be working in the space, too. “It was a challenge, but after several iterations we had a design that worked.”

By this point, the industrial technology students had been working much of the summer toward completing the coffee bus. Now it was time to turn the cardboard cutouts into reality and make all the pieces fit.

The industrial tech students had bigger ideas when they rebuilt the bus. Hoping for some serious grill action, they pulled the motor and built a grill to fit the engine spot. An estimated 150 burgers will fit on the massive cooker. 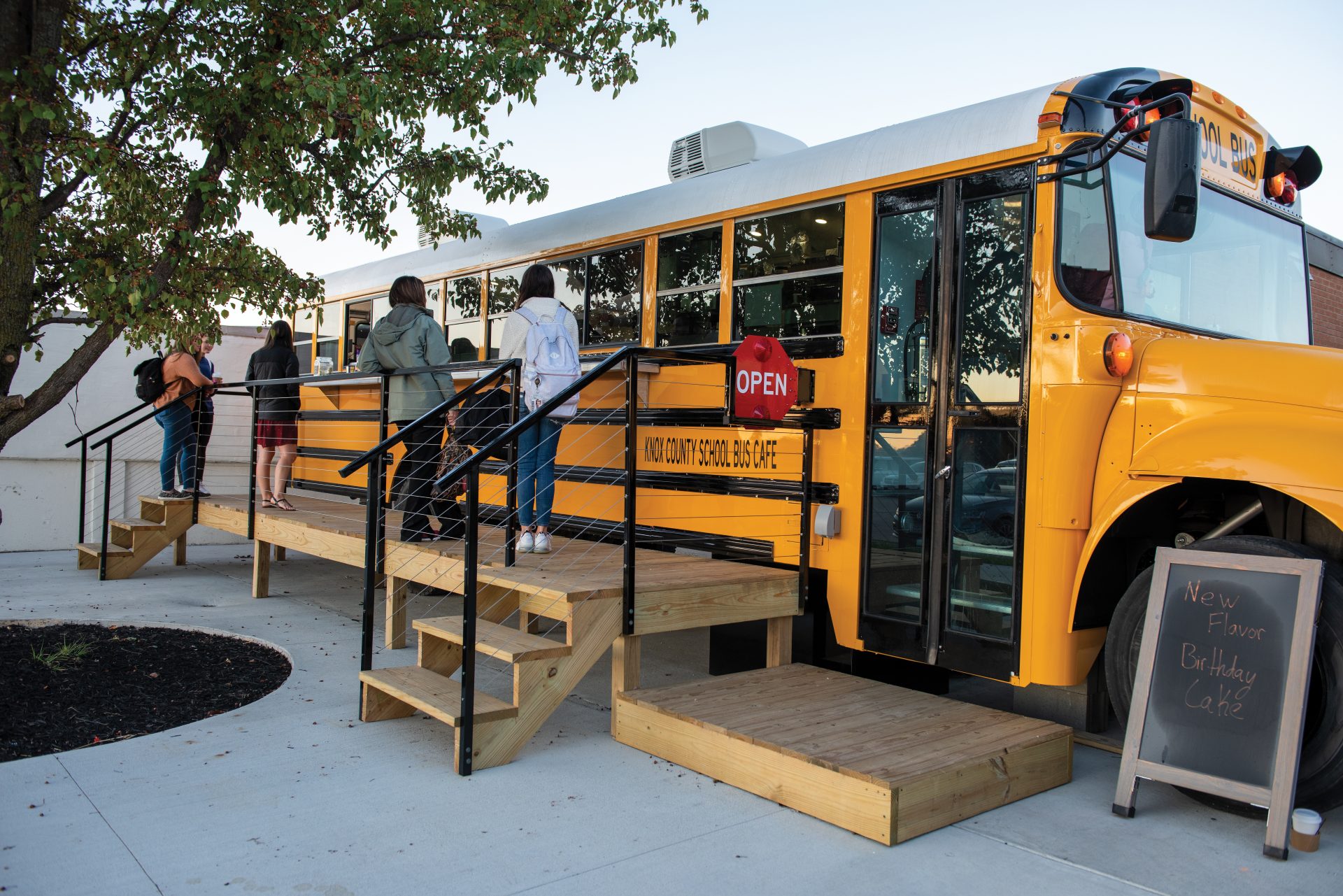 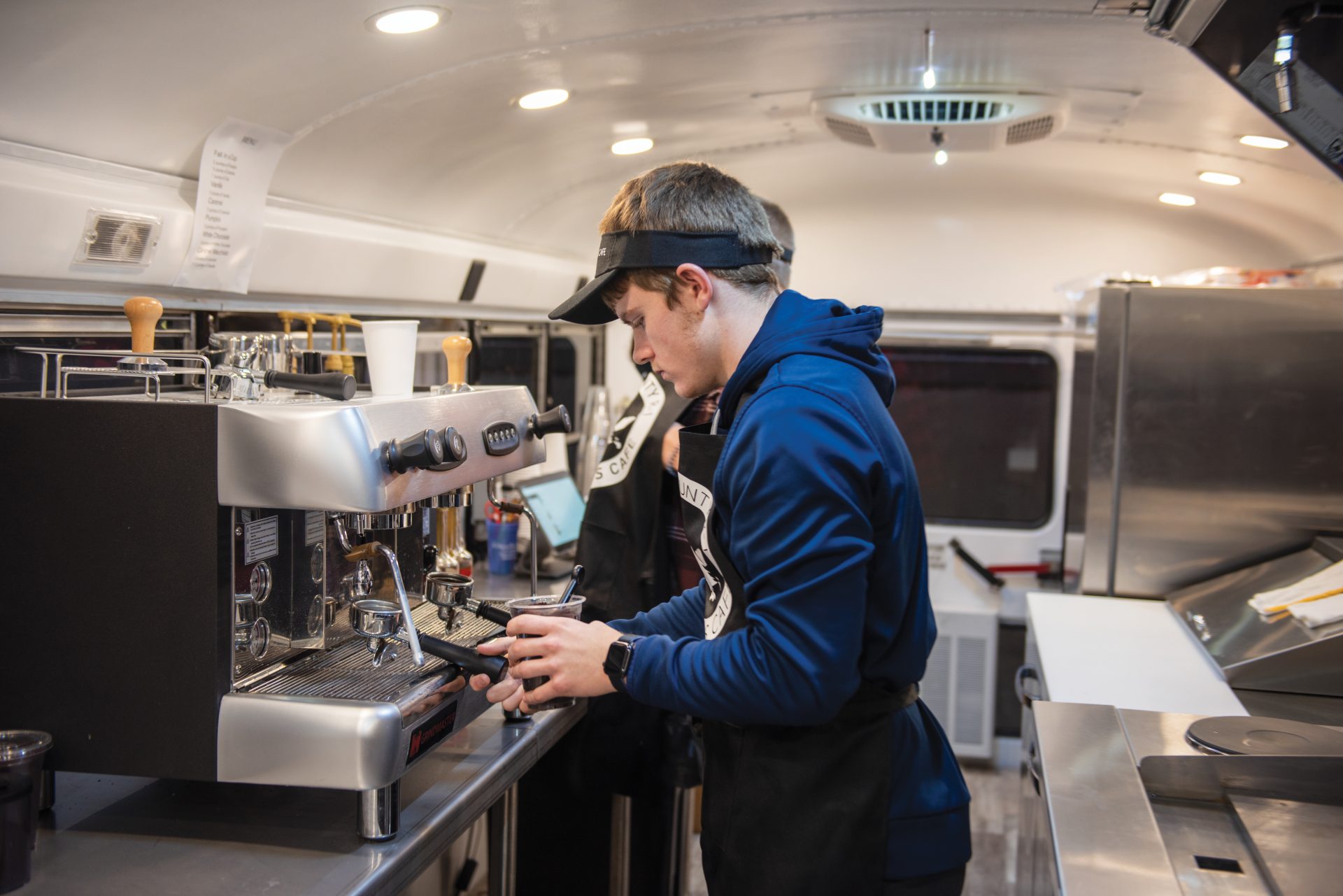 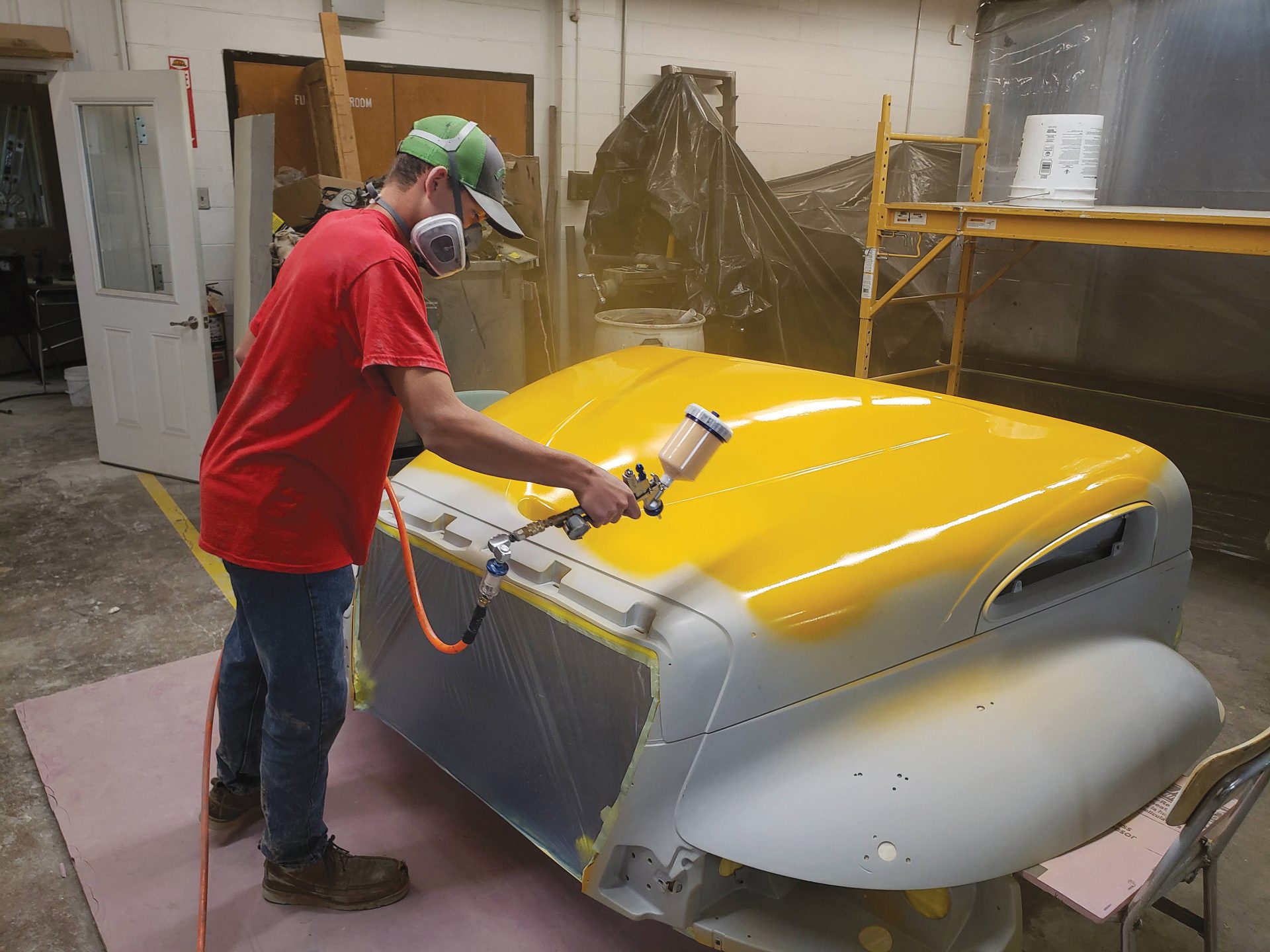 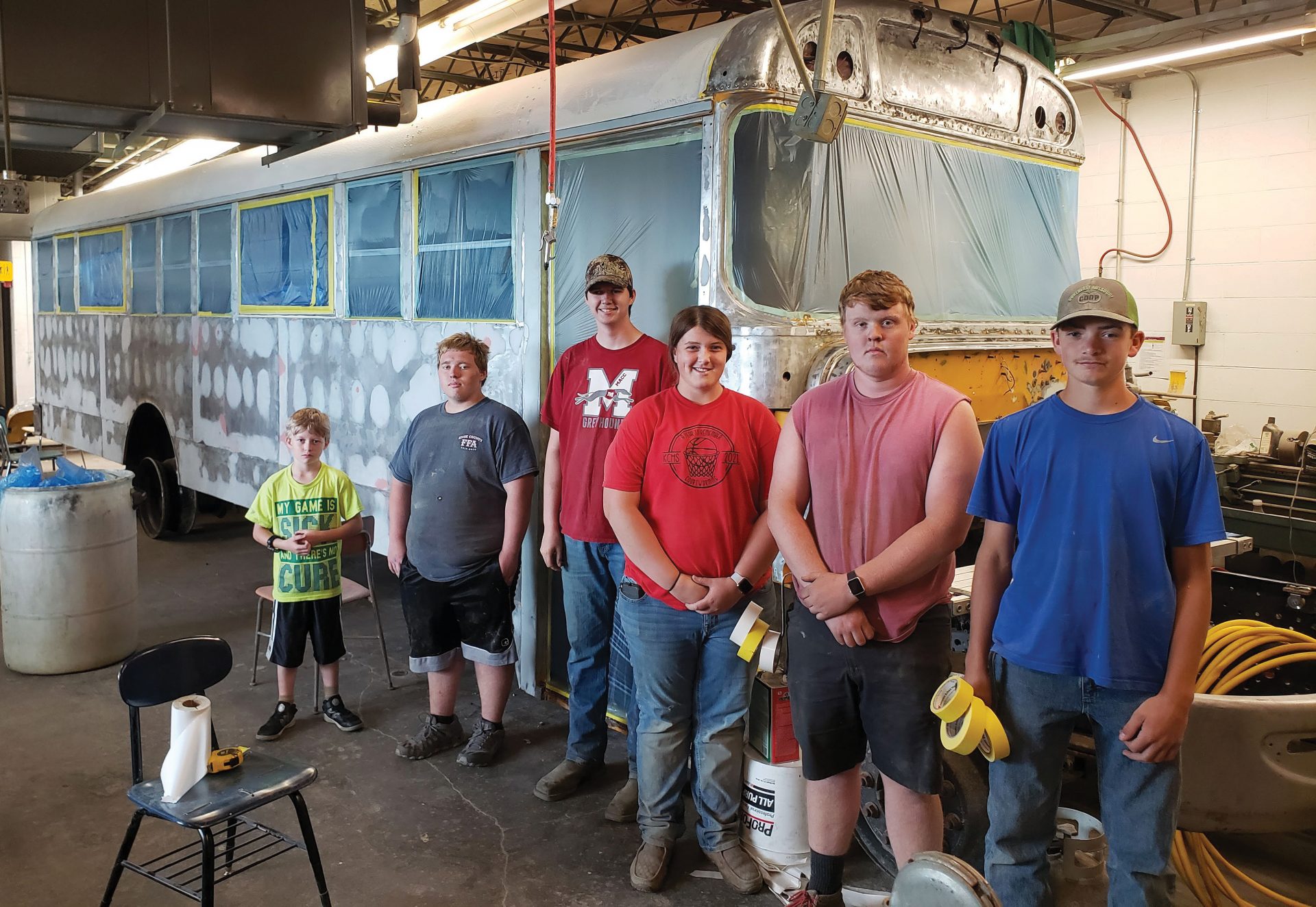 The tech students also recently completed a custom metal awning to fit over the bus deck where people order. “I knew our shop was capable of doing amazing things, but turning a school bus into a cafe sounded crazy,” says industrial tech student Collin Hayes. “This has been an experience I am proud to be a part of.”

With the bus and a decking/rail design complete, Brandi’s students were ready to learn the next part — actually making the coffee.

Brandi says. The eight students working in the coffee bus actually applied for the paid positions.

The students offer teachers the ability to place their orders the day before, assuring coffee is prepared the next morning as early as possible. Students deliver the coffee to the teachers or the instructors stop by to pick up their favorite bean concoction.

Current options include drip coffee (black coffee with or without milk), iced coffee or specialty lattes such as vanilla, caramel, hazelnut or the highly addictive Snickers latte (chocolate, hazelnut and caramel).

The entrepreneur class also offers a frequent flier KC School Bus Cafe card — a popular buy nine and get your 10th cup free option. Those who find themselves in need of caffeine in the morning love the bus stop, as a plain cup of joe runs $1, with lattes going for $2. While the coffee spot is open for only a brief time on school days, students pour up to 75 cups of java on a busy morning.

“We hope to extend the hours in the future and begin to offer breakfast sandwiches at some point,” Brandi says.

While the caffeine stop perks up the morning for faculty and students, the community also enjoys purchasing coffee from the bus cafe.

“This is real-world experience for the students. They’re learning to problem-solve, offer good customer service and work on their communication skills. It’s a win-win that teaches transferable skills,” says Brandi. “And there’s coffee. It doesn’t get much better than that.”