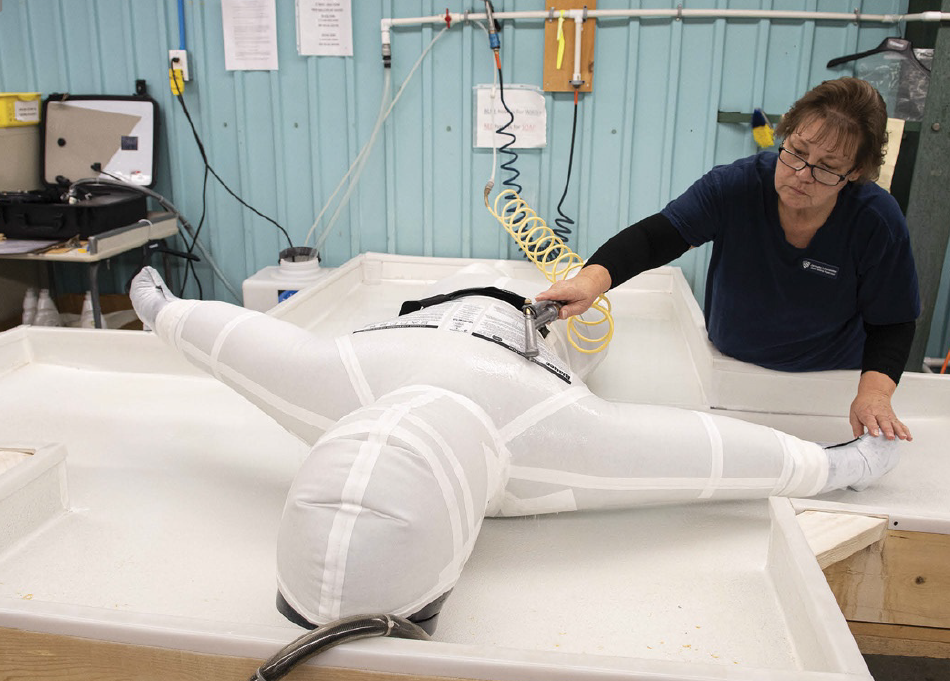 L.B. Manufacturing protects those who protect us
by Jim McCarty | jmccarty@ruralmissouri.coop

Picture this: An explosion rocks a major U.S. city. Lives are at stake, so law enforcement personnel swiftly prepare to respond. Unsure of the threat, they carefully don hazardous materials suits for protection.

The suits include integrated gloves and socks, liquid and vapor-proof zippers and a butyl rubber seal that snugs up against a face mask. Should the wearer suffer an injury, a rescue harness can be attached to tabs on the back of the suit to drag the person to safety.

The suit is designed to protect the user from chemical warfare, biological or industrial chemicals. And it is one of two classes made in Iberia, Missouri by employees of L.B. Manufacturing Co. The Iberia plant got its start in January of 1965 when Louis Blauer and his three sons started operations in a building that once housed the Iberia Academy. The Blauers made a name for themselves by supplying garments to department stores in Boston. Those early products included sport coats, jackets and raincoats.

The company moved into raincoats for the armed forces, and later police departments. Demand for its products was so great that Louis decided to expand and opened the plant in Iberia.

By 1970 the operation had outgrown the academy building. It moved to a new building on the east end of town where it remains today. The plant is one of the largest electrical loads for Gascosage Electric Cooperative.

Beginning with the Iberia facility, the company has grown to two manufacturing plants, with one located in Mexico, and a distribution center in Mississippi. They operate under the banner of Blauer Manufacturing Co. based in Boston.

The Blauer name has been an industry icon since 1936, with four generations of family running the operation. Today, its products run the gamut from the hazmat suits made at the Iberia plant to tactical knives, boots, belts and jackets used by SWAT teams. Its products are certified to multiple standards and are developed and field tested by the professionals that will use them.

For 15 years the Iberia factory produced garments for the U.S. government, which remains its biggest client. It made uniforms for the Army, Navy, Air Force and Marines, as well the blue uniforms worn by U.S. Postal Service employees. As its reputation for producing quality apparel increased, L.B. Manufacturing added local police departments, fire departments and emergency services such as ambulance districts to its list of clients.

In 2008 the company began making Class 2 and 3 chemical biological suits, and that is all it does today. “Our current product is shipped all over the United States, protecting civilian and military personnel,” says Debbie Hill, plant manager. “Our Class 3 suits were worn by a special unit that was sent to Japan for the tsunami disaster in 2011. We take special pride in our garments, knowing they are suits to protect the end user. We are very proud to be a part of it.”

Over the years, Hollywood has come calling, somehow finding the plant located in a town of 736 people in central Missouri. L.B. Manufacturing made several chemical suits for the movie “Transformers: Dark of the Moon.” It made a postal jacket worn by Cliff on the TV series “Cheers.” Most recently, the company made suits used in the TNT network series “The Last Ship.”

It was called on to make garments for President Carter’s inauguration and I.D. jackets for FBI characters on another TV show.

The hazard suits begin life as large rolls of special fabric that are stacked up to 50 layers thick and carefully cut from a large pattern designed to minimize waste. As the pieces are cut, they move on to other employees who sew them together, add zippers and other parts until they are complete.

From here every garment is carefully inspected multiple ways to ensure they will protect the end user. At one point the Class 2 suits are filled with air and water is sprayed on them to show any leaks. Another test checks for leaks in the rubber booties. Any piece that fails inspection is re-paired, if possible, or destroyed. The company can track its products all the way back to the material lot should there ever be a problem.

Business is so good for the plant’s products that the company would like to expand, Debbie says. But like many small-town businesses these days, finding enough help is a real issue. Iberia’s remote location and small population make it difficult to attract enough employees to keep the current production going. Employees enjoy good wages, paid holidays and medical insurance, in addition to in-tense training for the highly skilled tasks.

“Yes it’s manufacturing, and you are on your feet,” Debbie says. “But if you are willing to work we have a good future for you here.”

The Blauer group’s slogan is “Serious Protection” and the 80 workers at the plant in Iberia take that to heart, knowing lives depend on the quality of their work. Those who rely on this protection hope it is never needed but are no doubt grateful for these made-in-Missouri products.

For more information about jobs at L.B. Manufacturing, call 573-793-6622. To learn more about products sold by the Blauer Co., visit www.blauer.com.