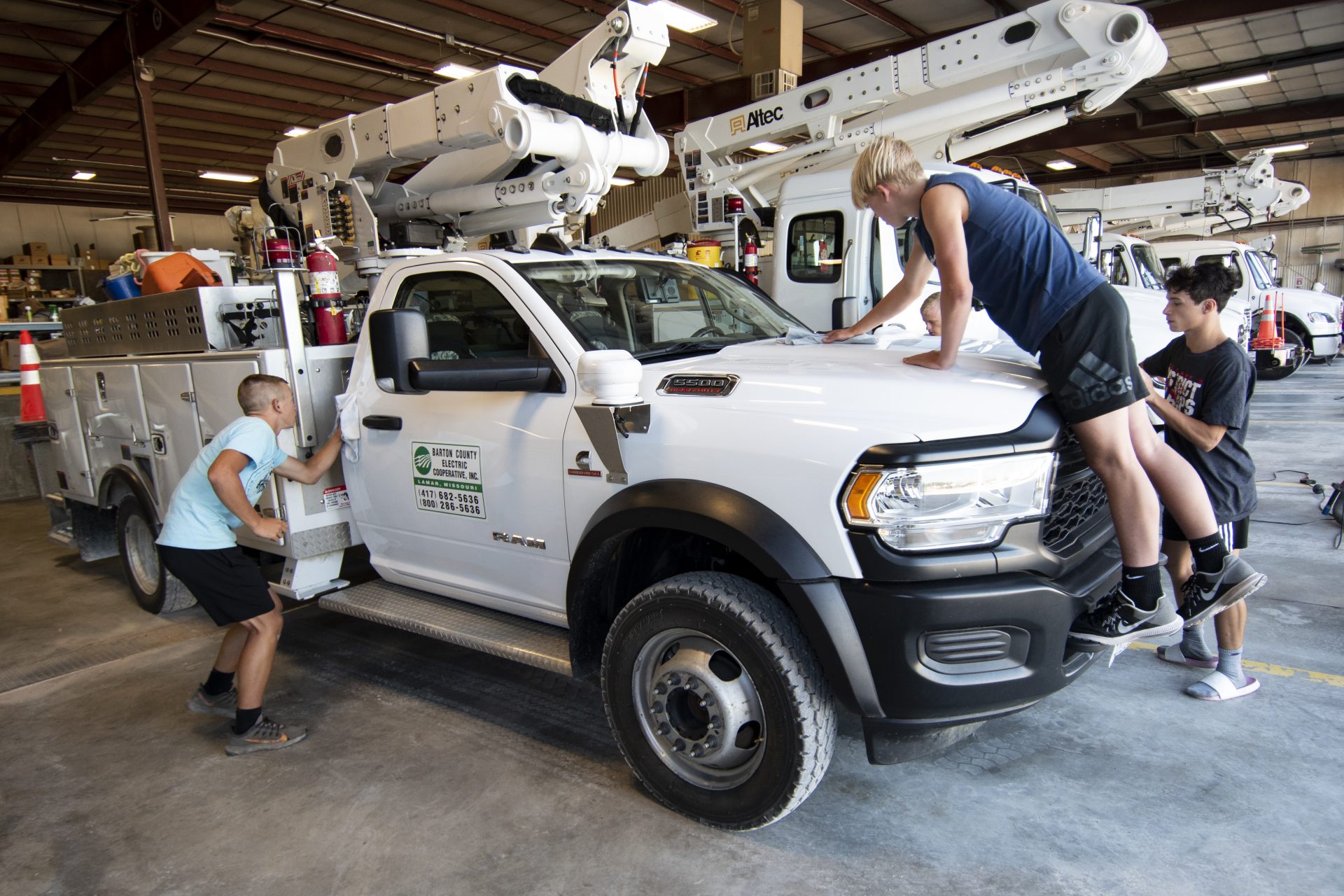 Coaches from around the state have been trying to figure out what makes Lamar’s football team so good. Starting in 2011, the Tigers from southwest Missouri have dominated Missouri Class 2, with a record seven straight state championships.

The Brotherhood, as the team is known, is so strong that the Lamar High School Football Program was enshrined in the Missouri Sports Hall of Fame in 2018. Another testament to Lamar’s success is the fact that in 2012, 2016 and 2017 the Tigers won state in both football and cross-country, two sports that take place in the fall.

While rival coaches have failed to decipher the secret to their success, Barton County Electric Cooperative Manager Jeff Hull thinks he knows the answer. It’s not so much the powerful offense or the stingy defense. It’s the hard work that is second nature to team members, along with being part of a community that cares about their success.

“The coaches don’t just care about the score at the end of the game,” Jeff says. “They care about the kids’ character, how they’re going to grow up to be young men and women. It’s a community effort. Parents and organizations like Barton County Electric and other community leaders in town help make this all happen.”

On a sweltering day in late June, Jeff greets a third of the team and defensive coordinator Chris Wilkerson at the garage where the cooperative parks its trucks. This day is scheduled for the team to give back to the community that supports it, win or lose.

“We have been very fortunate to have really good kids that don’t mind getting up at four o’clock in the morning, and then they go back to work on the farm or out in our community for the rest of the day,” says Chris. “When people ask, ‘Hey, what do you guys do?’ Well, we get up at four o’clock in the morning, and we start weights at 4:45. There’s not a lot of schools in Missouri or wherever that can get 65 kids in a weight room at 4:45 — every single morning.”

With the coach barking orders like a sideline drill sergeant, the athletes set to work making the co-op’s trucks shine, inside and out.

It’s a tough job considering what these trucks go through to keep the power flowing for members of the cooperative. But the work is done the only acceptable way for The Brotherhood: perfection.

At one point the coach stops everyone and calls for a huddle. One truck has glass cleaner left on the dash. Another didn’t get its mirrors cleaned. They get fixed. 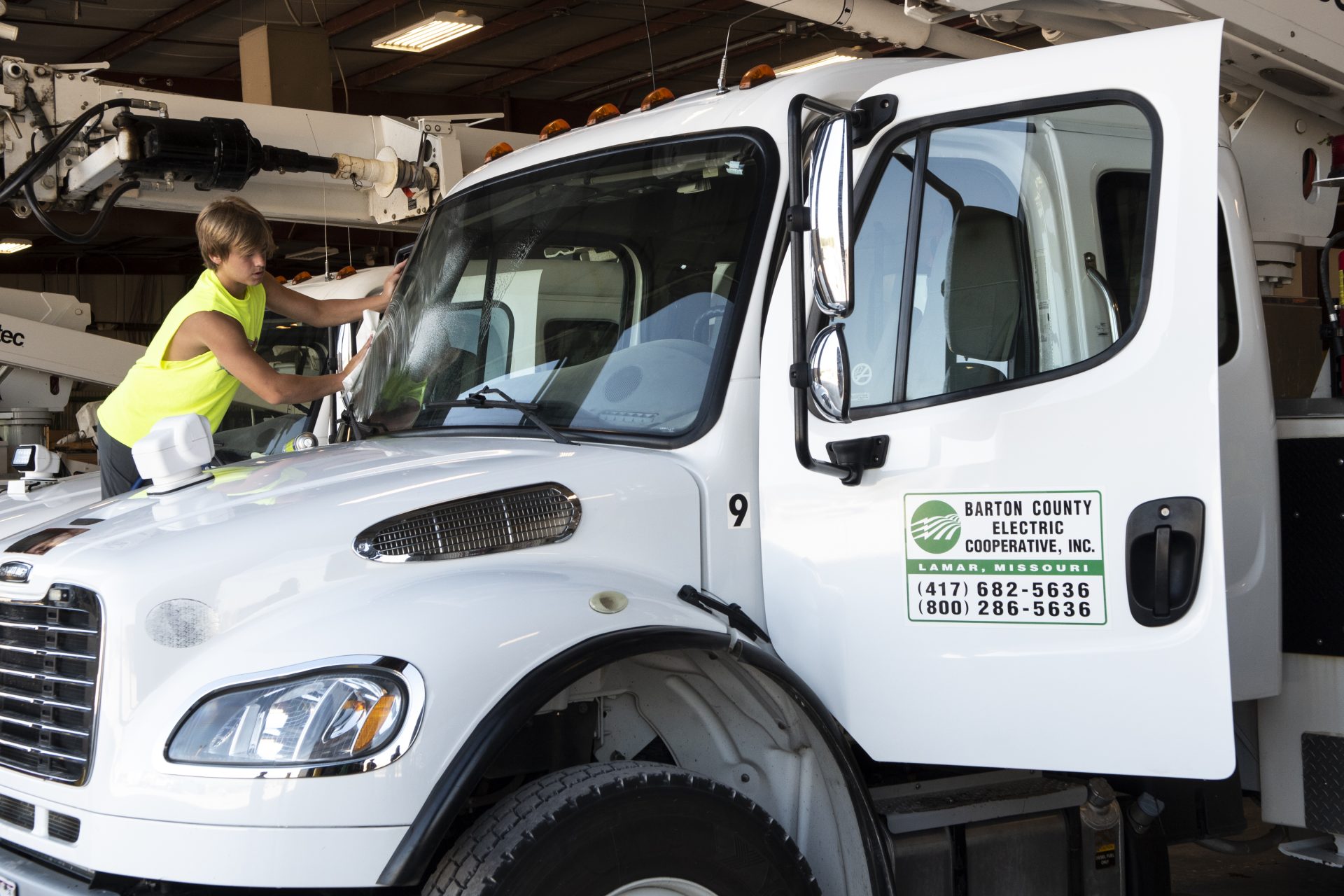 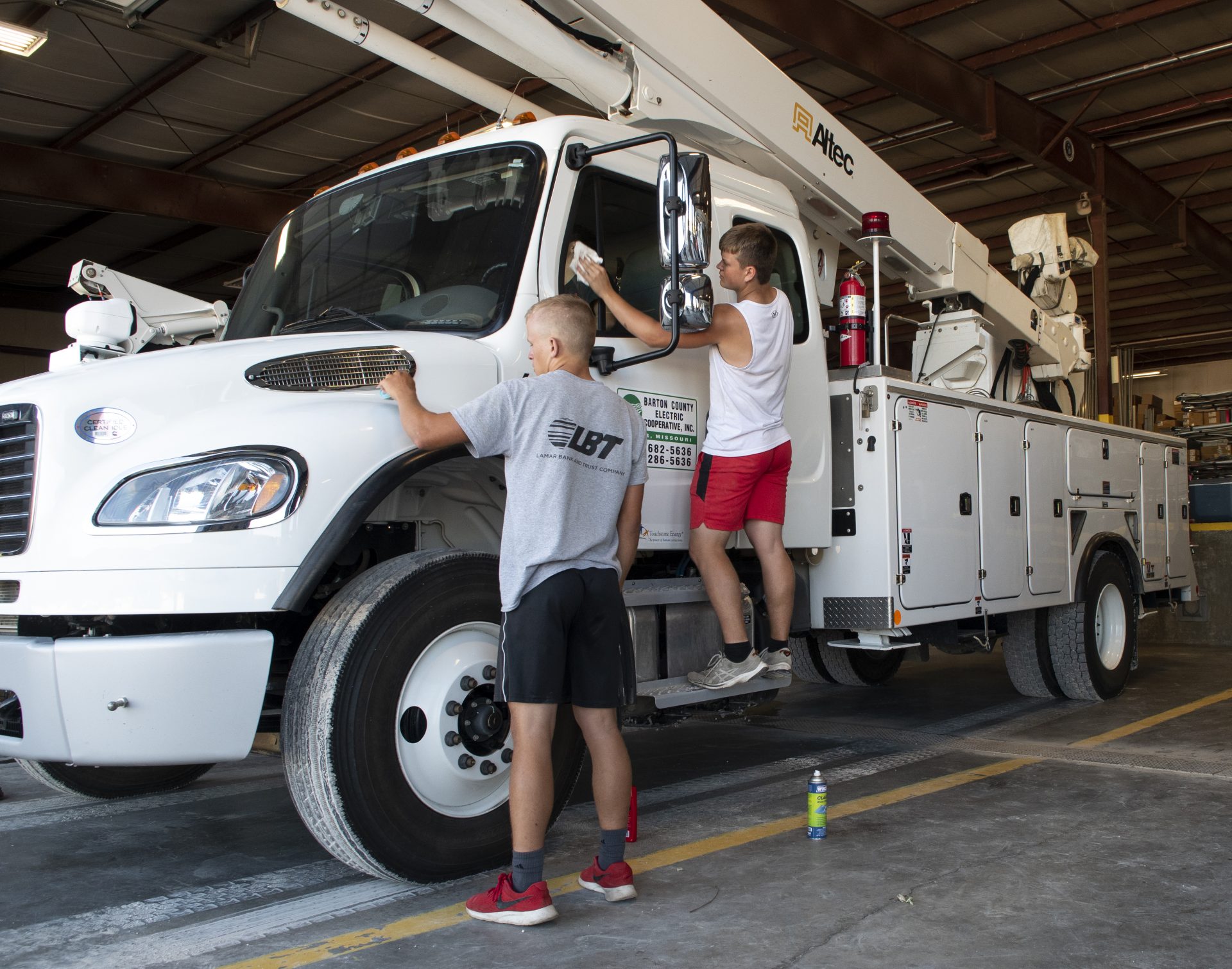 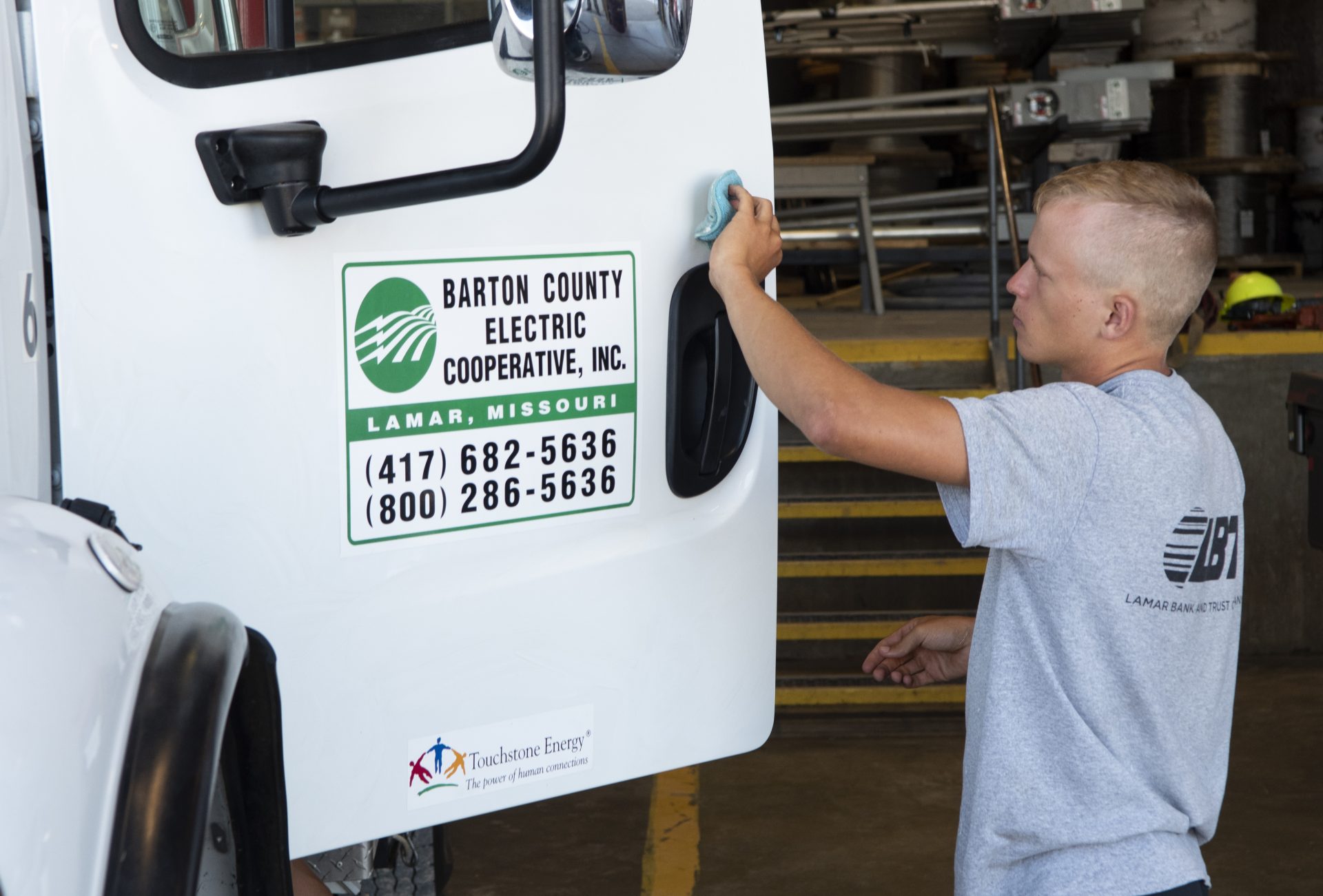 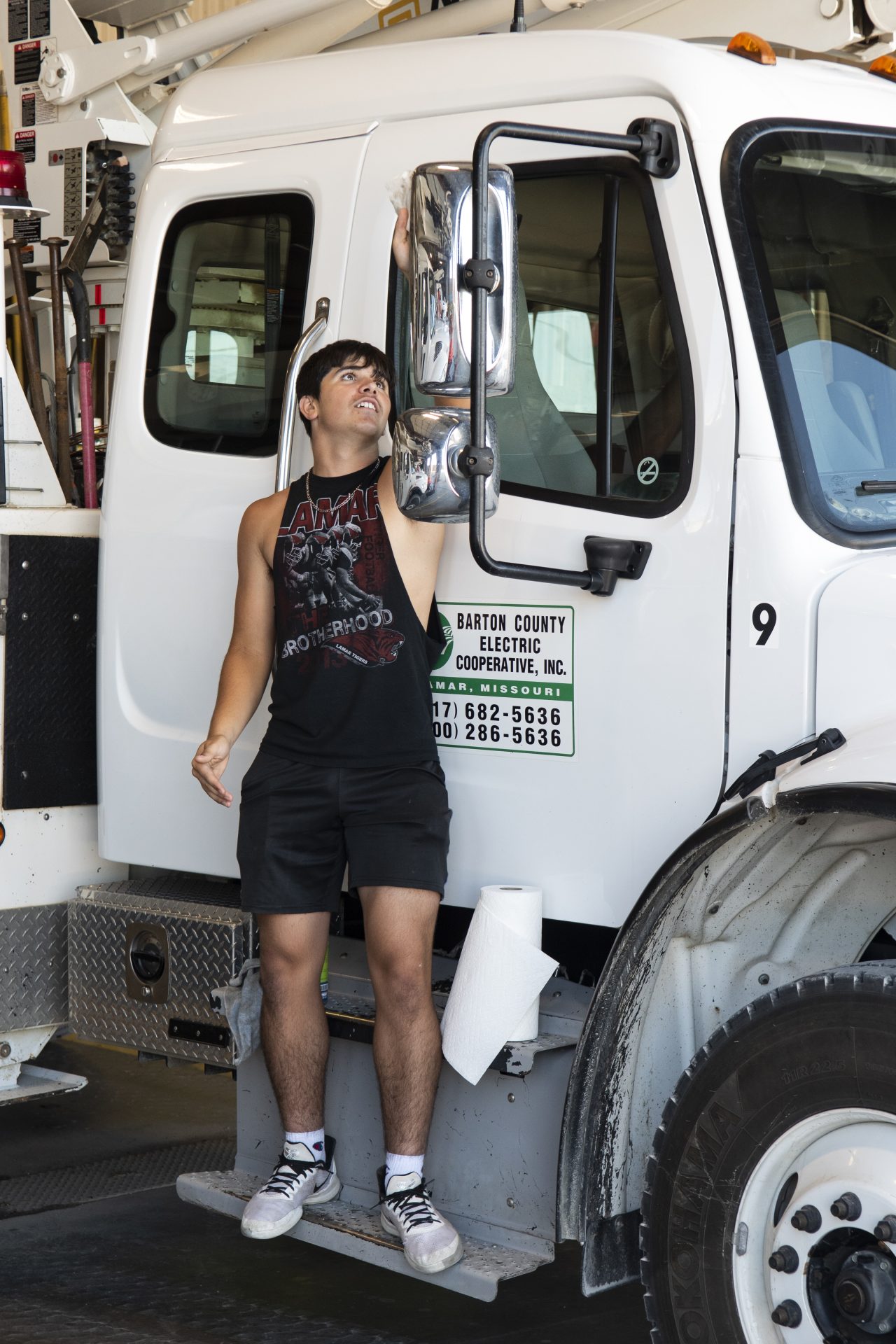 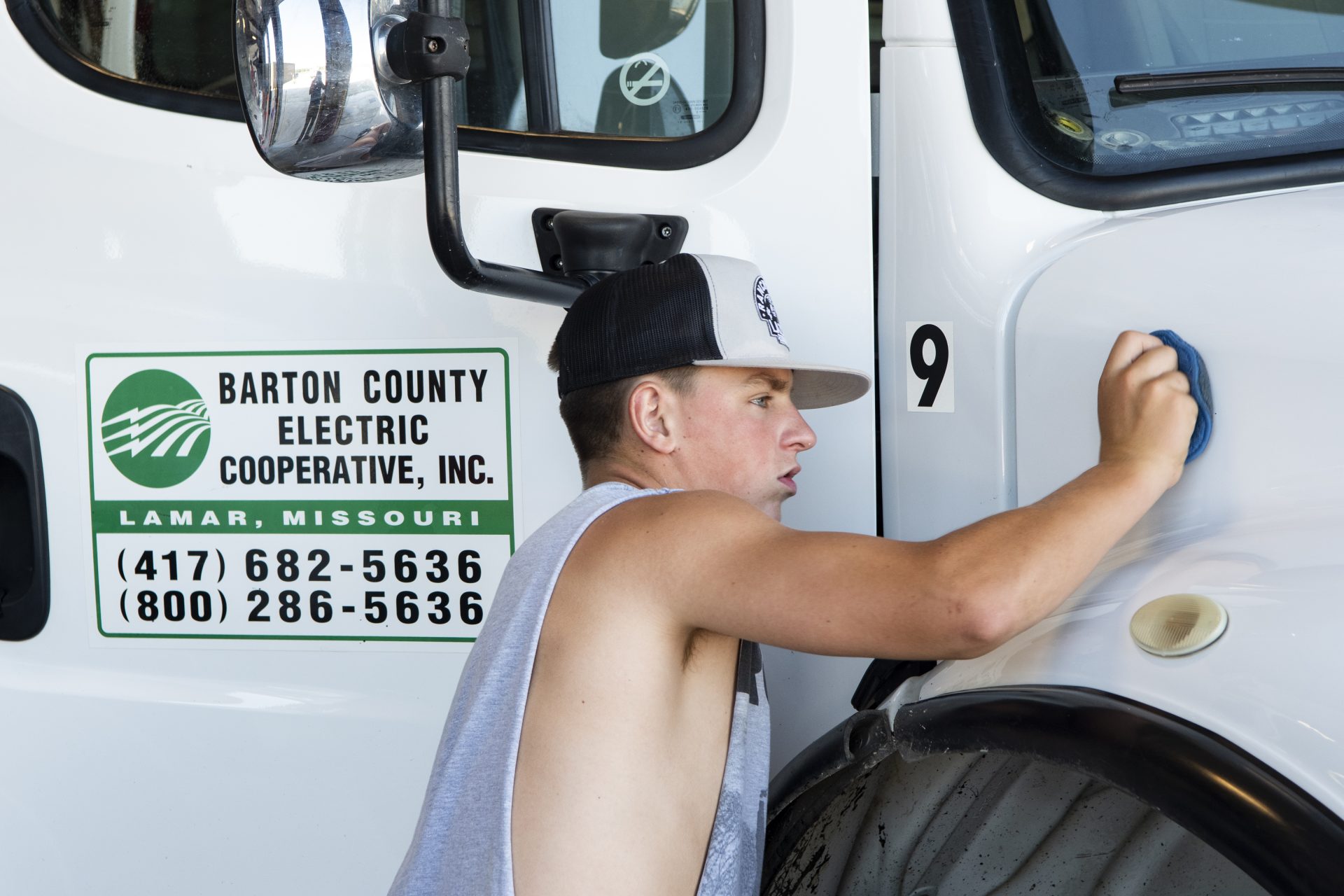 In 2 1/2 hours team members will make 17 trucks look new again. In return for the hard work, Barton County Electric will make a donation to the Lamar High School athletic department.

“We’re getting new equipment from the money they donate,” says Alex Livingston, a senior linebacker. “New helmets, new shoulder pads and the money helps pay for pregame and after-game meals. Of course, this is a life skill everyone needs to have. Hard work. Attention to detail. Paying back whenever people help you.”

Whether it’s practicing a defensive play or cleaning a bucket truck, the goal is the same, he says. “Everything’s very critical, very precise. They want everything to be as perfect as it can be.”

Eventually the seniors on the team will graduate and move on with their careers. Currently two former football Tigers — Morgan Davis and Clayton Buzzard — work as linemen for the cooperative while a third, Jake Polodna, is serving an internship while training to be a lineworker at State Technical College of Missouri.

“We look at this as a recruiting effort,” Jeff admits as he watches the team shine the trucks.

The rest of the team is spread out around Lamar, picking up trash from the roadsides or hauling off bulky items for residents who need to dispose of something. It’s a tradition as perennial as the Tigers playing for another state title in the fall.

“We love being a part of this, not just because of the success, but to give them a little insight into what real life is about once they get done playing a sport,” says Jeff. “None of us wins every day. It’s how you play the game that transfers to life. And that’s why we want to be a part of this.”

Lamar’s football season kicks off on Aug. 26 at Marshfield. You can learn more about Barton County Electric Cooperative at www.bartonelectric.com.