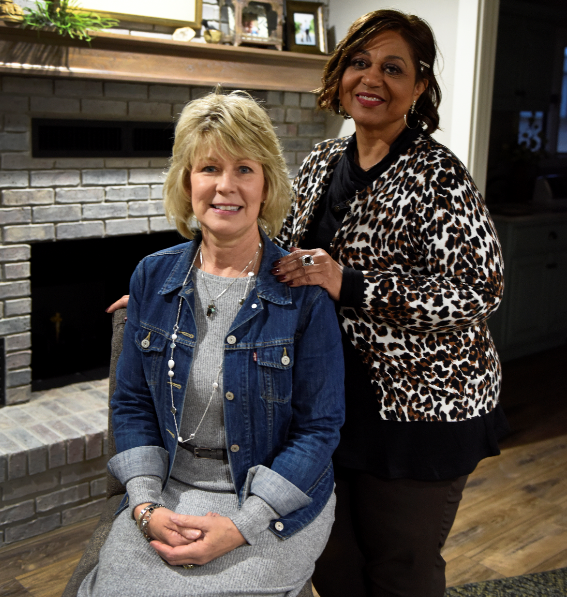 Doncella Liggins won’t forget the day three years ago when she left a follow-up appointment after a weeklong stay in a Kansas City hospital. Her parents, who had come along, waited in the car.

“I remember getting in and them asking ‘What’s wrong?’ ” says Doncella, noting the shocked look she must have had on her face.

The response was: “They told me I’m going to die.”

Only weeks before, Doncella recalls trying to walk up the steps at Bates County Hospital where she works as the director of health information management. “I could barely breathe after six or seven steps. I played it off and just went on to my office,” she recalls, “But in the back of my mind, I knew something was wrong.”

The normally vibrant lady went home early that day and stayed in bed most of the weekend. When family couldn’t rouse her, they stopped by to check on Doncella and immediately took her to the emergency room.

“All of my tests were reading like I’d had a heart attack, but I hadn’t,” she says, noting the next few days in the hospital only revealed high blood pressure, which she had battled since her pregnancy years ago. With no real improvement, her Butler medical team transferred Doncella to St. Joseph Hospital in Kansas City, where the diagnosis of kidney disease was given. Her prognosis of end-stage kidney disease was caused by an inherited kidney condition she’d never known about.

“Not only did I need to start dialysis right away, but I needed a kidney,” she recalls.

To start dialysis, a fistula (the merging of an artery and a vein) is often placed in the patient’s arm — but that can take six or more months to form, Doncella learned. So a surgeon put in an arterial graft which allowed her to begin dialysis in a week’s time.

Doncella’s name was added to the national organ donor list. She began what would end up being 1 1/2 years of dialysis three times a week for three to four hours at a time.

While she knew receiving a kidney from the donor list would mean the donor was likely deceased, Doncella knew what she wanted.

“I prayed every day for God’s peace during this fight and for healing,” says Doncella, 64. “I also prayed for a kidney — and I prayed it would come from a living donor.”

According to the Mayo Clinic, living-kidney donation is one of the most common types of living-donor transplant, numbering more than 6,000 donations reported in the United States each year. But more than 113,000 people await transplants, as reported by the U.S. Department of Health and Human Services, so the demand far outnumbers supply. Living organ donations offer a shorter waiting time for the recipient and, in turn, extends the supply of organs for those remaining on the national waiting list.

One night while attending a Beta Sigma Phi sorority holiday gathering, Doncella opened up and shared her health plight with her sorority sisters. Several in the group asked how to go about getting tested as a match. One of those ladies was longtime friend, Beverly Burch.

“It wasn’t until months later that Doncella said, ‘Hey, if you’re still interested, here’s the name of the coordinator you can contact,’ ” recalls Beverly, 57. “So I began the process and a couple of months later they told me I was a match.”

Beverly, a customer service representative at Osage Valley Electric Cooperative, says numerous physical examinations were done before learning she was a match. And now that she knew, she would be the only one who could tell Doncella, because all testing is done anonymously.

While Beverly thought of a special way to share the news with her friend, Doncella fought bouts of pneumonia off and on, which would move her down on the national organ donor list and delay the possibility of receiving a transplant. But on May 18, 2018 during a checkup, Doncella was told a perfect match had been found and the transplant surgery could be scheduled.

“I went to the restroom, got on my knees and thanked God,” says Doncella.

With surgery scheduled for June 28, it was still up to Beverly if she was going to tell Doncella or remain anonymous.

Beverly enlisted her Osage Valley Electric co-worker and sorority sister, Jana Rosier, to get Doncella to stop by their workplace the day before her surgery under the guise of receiving a gift from her sorority sisters. When Doncella stopped by before her last dialysis treatment. They gave her a gift and a card, which she opened and expected to see it signed by the group. Instead, it was signed, “Looking forward to sharing part of my ‘life’ with you! Love you, Beverly.”

The successful surgeries took place at St. Luke’s Hospital in Kansas City. Beverly was up walking around as soon as allowed and her first stop was to check on Doncella.

The duo has spoken publicly several times about their experience and hope others will consider being a live organ donor if the opportunity arises. “You don’t have to give your life to help save someone else,” says Beverly, who returned to work only two weeks after surgery and is doing well.

Doncella also is grateful to Beverly for giving purely because she saw a friend in need.

“I feel the world today is so racially divided,” says Doncella, “But Beverly said she didn’t see color. She saw a friend in need.

“I meet every day with gratitude and peace these days,” she adds. “I’m so blessed.”