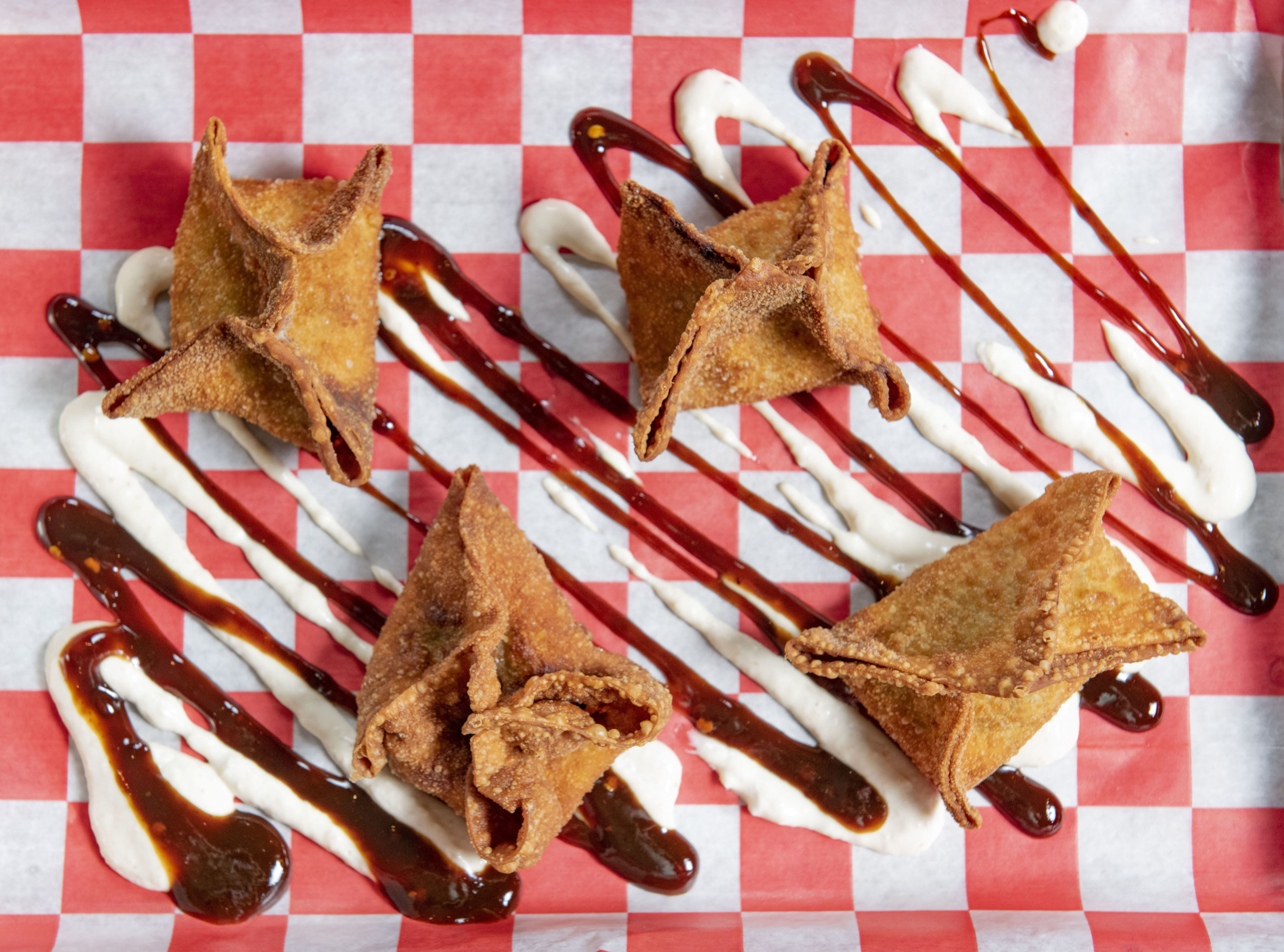 Smokehouse Classics with an Elevated Twist

Your nostrils will tell you as soon as you walk through the door. This is undoubtedly a smokehouse. The pecan- and cherry-wood-filled smokers might be outside, but their aroma fills this St. Charles County restaurant. That’s just the way owner Peter Venezia wanted it.

Duke’s BBQ Shack in downtown Wentzville is not your typical barbecue joint. Since opening the restaurant in 2017, Peter and pitmaster Eric Pierre have been dishing out anything but boring barbecue. Nearly every appetizer, sandwich, entree and side at Duke’s hits one of the three Old Hickory Pits and their unique creations have garnered a loyal following.

Peter is no newcomer to the food service business. He owned restaurants, lounges and a catering business in St. Louis. After doing thousands of weddings and corporate events, Peter and Eric put a smoker on the roof of their building on Olive Street in downtown St. Louis.

“He started doing briskets, pot roasts and tenderloins for weddings,” Peter says of his partner. “As he got more proficient, I told him it might be fun to do a little side barbecue project.”

They went a little further than that. They built a brand new structure — made to look like an old filling station — with a wraparound dog-friendly patio in Wentzville. “We wanted to make it very homey, very comfortable,” Peter says. “It conforms to the architecture of the town. It’s a very family- and community-oriented place.”

The smoke-heavy restaurant’s name is derived from the nickname for Peter’s late father, Duke.

Peter and Eric have developed a menu that has its roots in traditional smoked fare, but takes them steps beyond with signature sandwiches, sides and sauces. “We wanted to take a more elevated approach to barbecue in the execution of our food,” Peter says. “It’s not just smoking pork and brisket and sides that were OK. We wanted to go further than that.”

A popular and traditional barbecue option is the sampler platter, known as The Duke Plate. It features more than a pound of smoked prime brisket, pork and chicken along with a pair of ribs, sides and drinks. “Couples can split it or if you’re really hungry, get it by yourself,” says Peter, a Cuivre River Electric Cooperative member.

The rest of the menu is where Eric flexes his culinary muscles. Their most popular appetizer is an unusual twist on an item typically found in Asian restaurants. The Burnt End Rangoons feature a mixture of burnt ends and cream cheese that is smoked then takes a ride through a food processor. The mixture is scooped into wontons, deep fried and drizzled with a combination of Duke’s Alabama White and ginger-infused Original barbecue sauces.

“It’s very smooth when you bite into it,” Peter says. “It’s very rich. Really interesting taste with the burnt ends and cheese.”

Other appetizer options include smoked chicken wings and pulled pork nachos which Peter says “could be a meal on its own.”

If you want your meal served on bread, there are plenty of delicious smoked options. One memorable sandwich is the aptly named Dirty Mustache. A hoagie roll is stuffed with smoked prime brisket and locally sourced smoked pepper jack sausage and drenched in a beer cheese sauce and topped with homemade fresh-fried onion straws. If you prefer to substitute out the brisket and go for chicken, ask for the Dirty Bird.

Smoked meats can also be found on the D’s Buffalo Philly and Duke Reuben.

If you’re just not in the mood for a smoked meal, Duke’s hasn’t skimped on those options. They source American Kobe beef from a farm in Westphalia for an unforgettable taste. “We get a cow about every three weeks,” Peter says. “We use the tenderloins for cheesesteak, then pretty much everything else gets turned into our burger patties.”

The mouthwatering burgers are popular, but the customer favorite is the Big Doobler. The burger is an American classic featuring a pair of Kobe beef patties, American cheese, lettuce, tomato, onions and pickles topped with Doobler Sauce. “Doobler Sauce is not exactly Thousand Island dressing, but similar,” Peter says. “Everything on that burger including the Doobler Sauce is a big burst of flavor.” 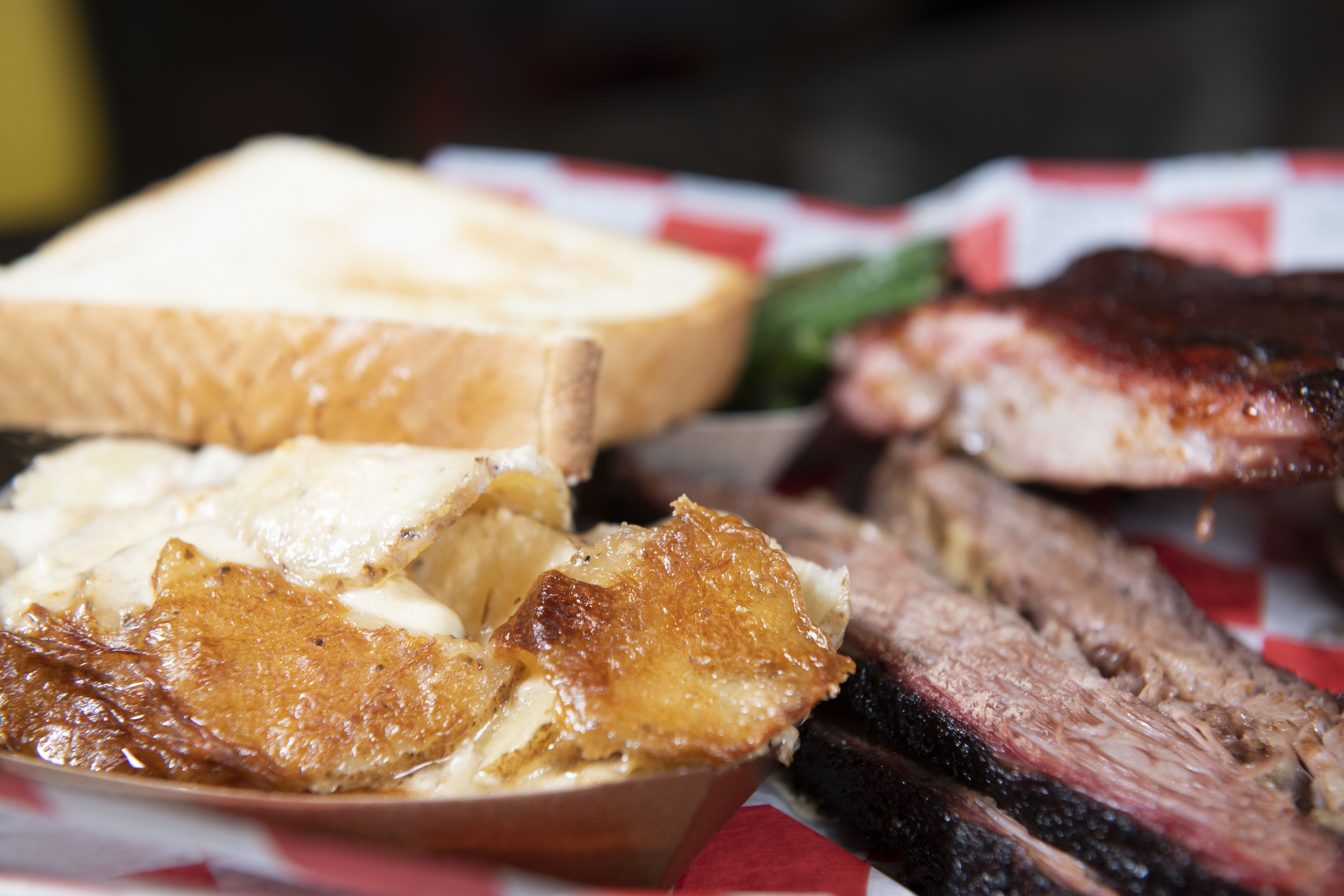 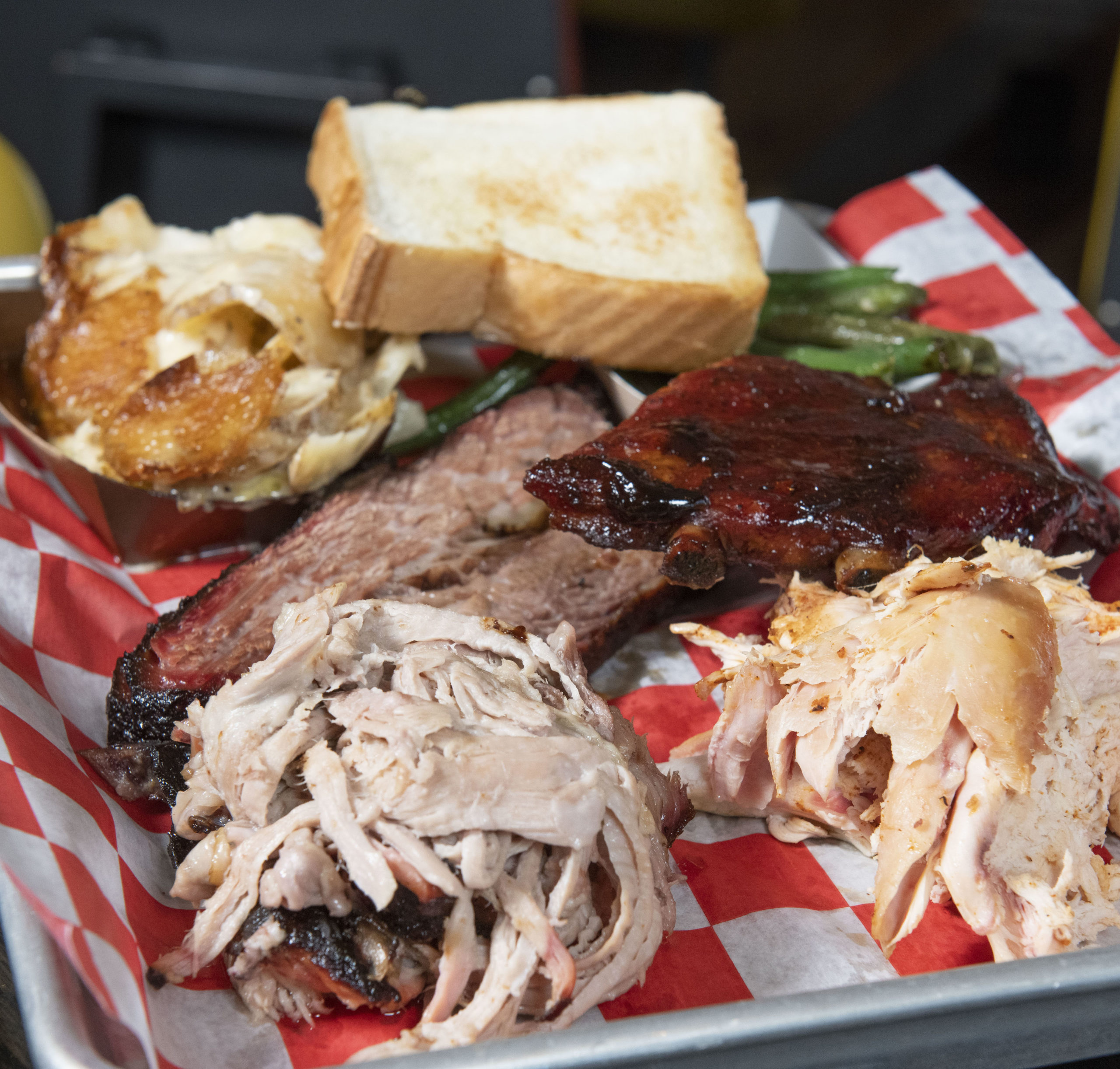 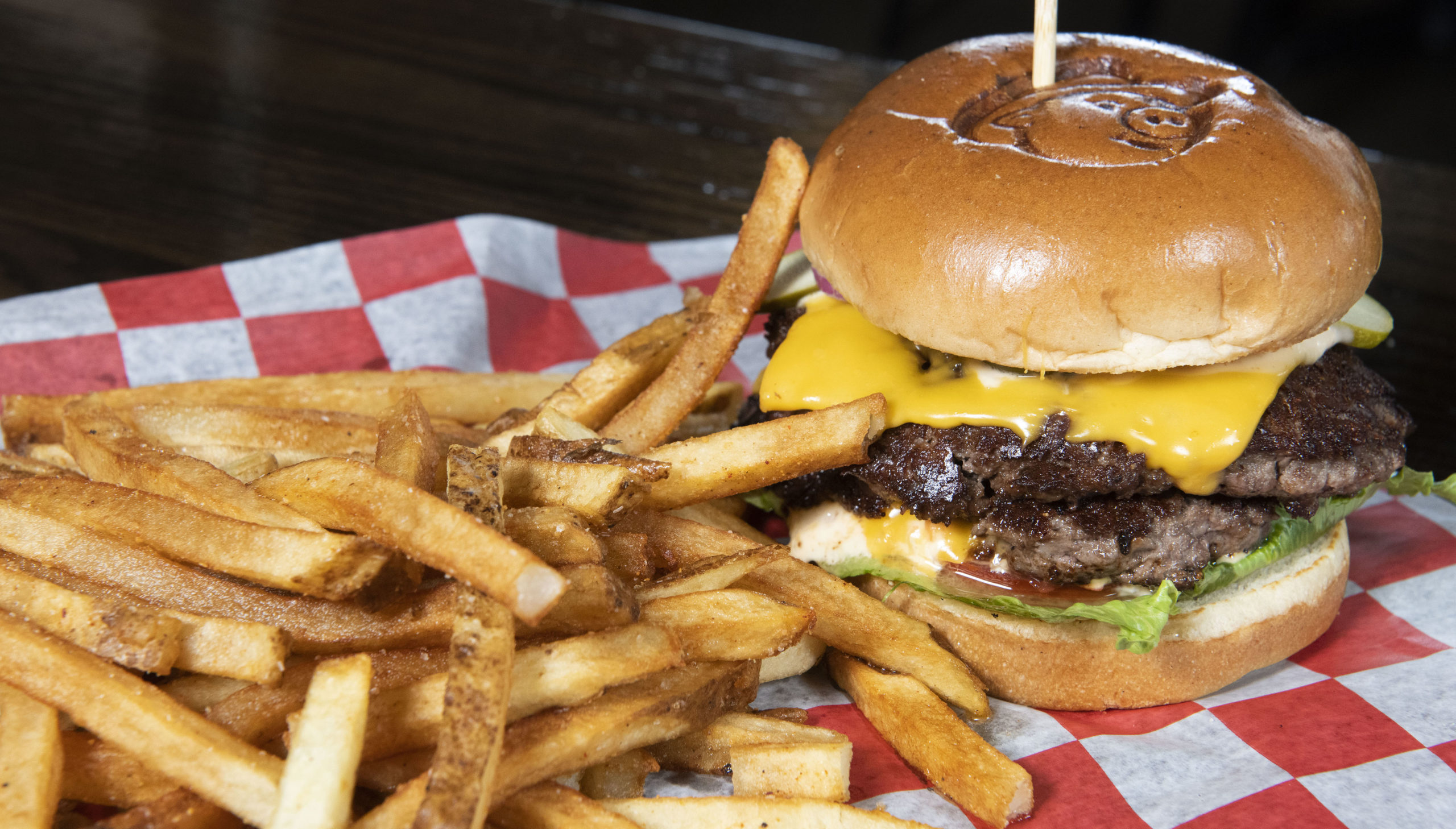 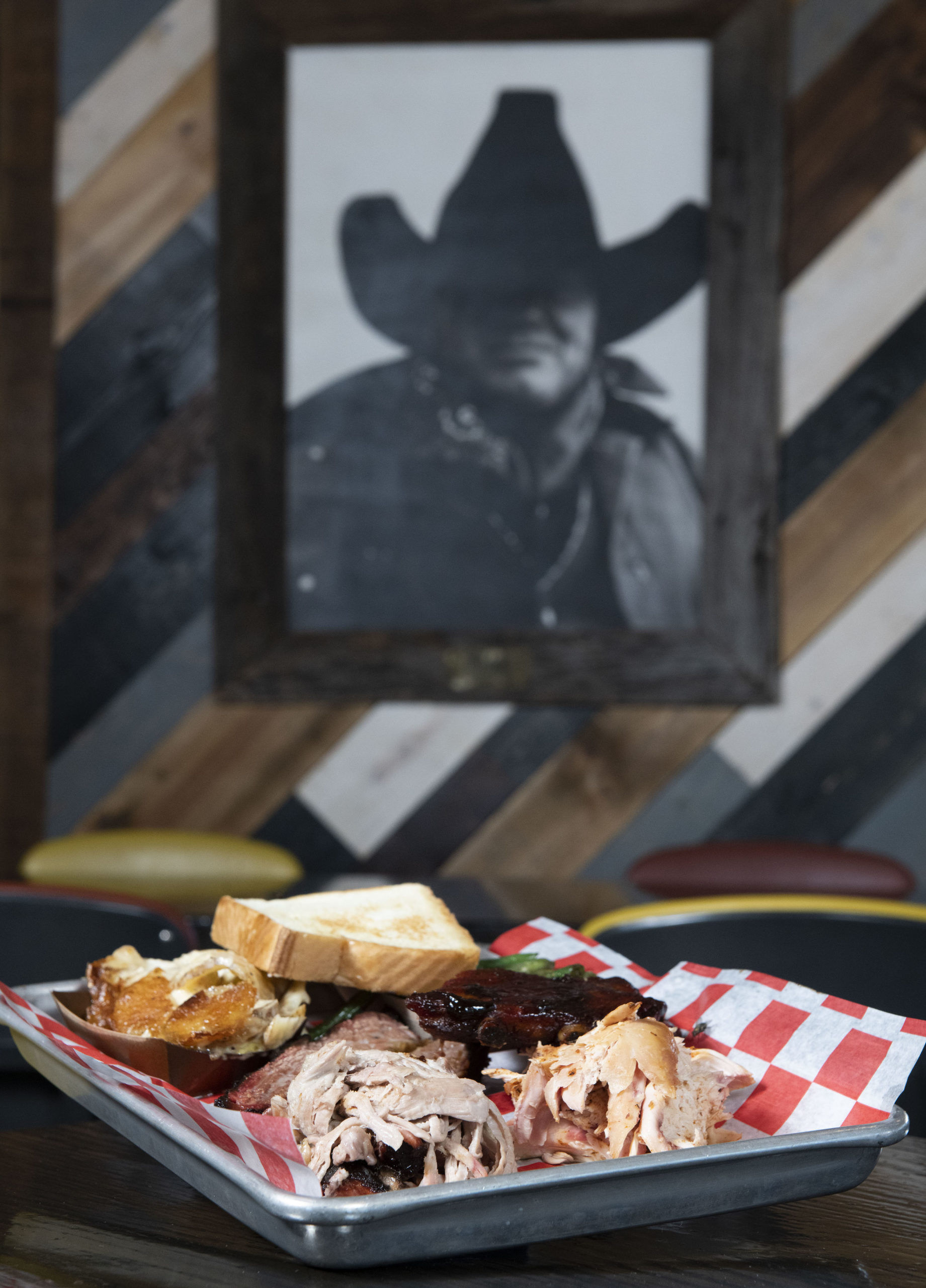 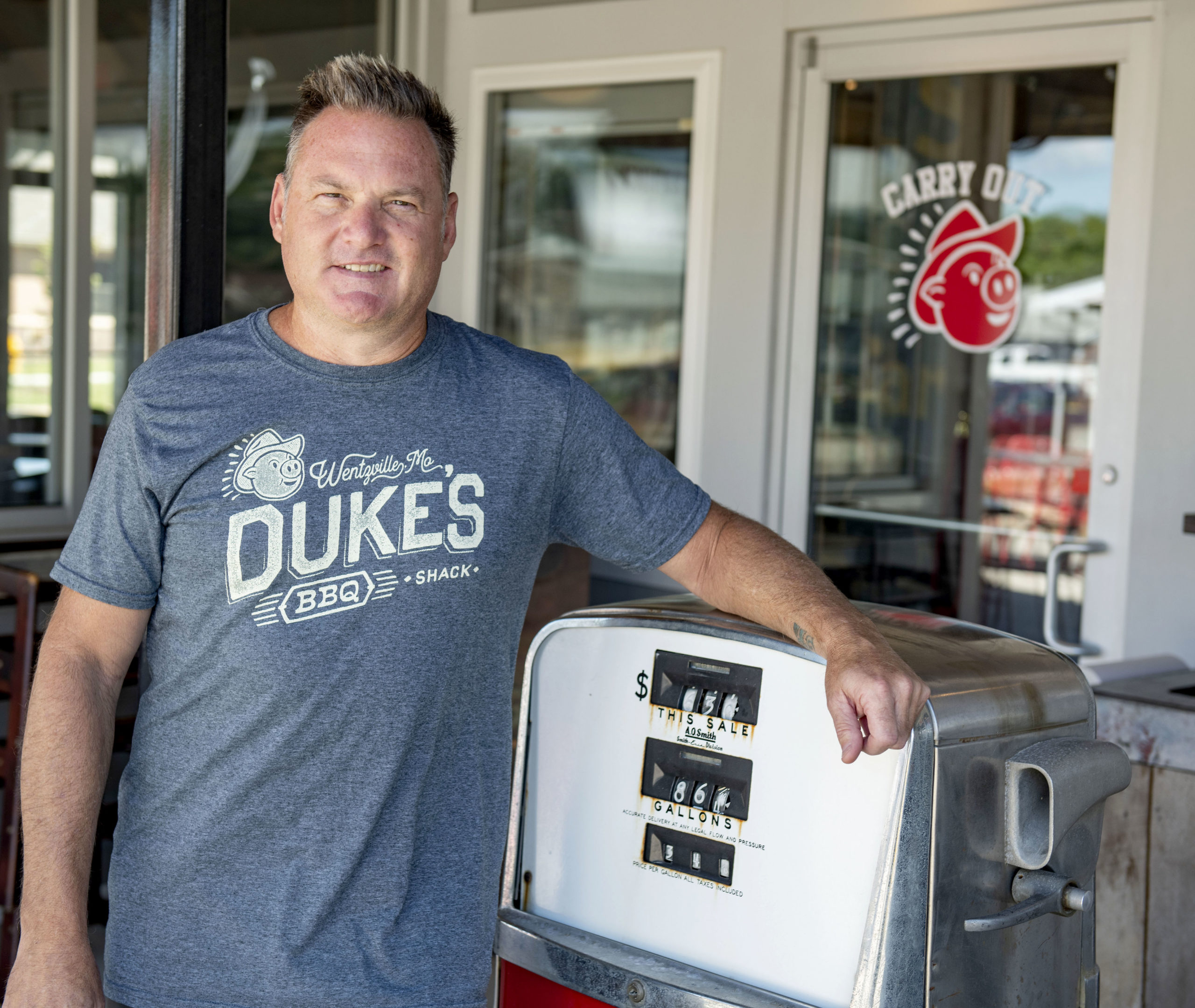 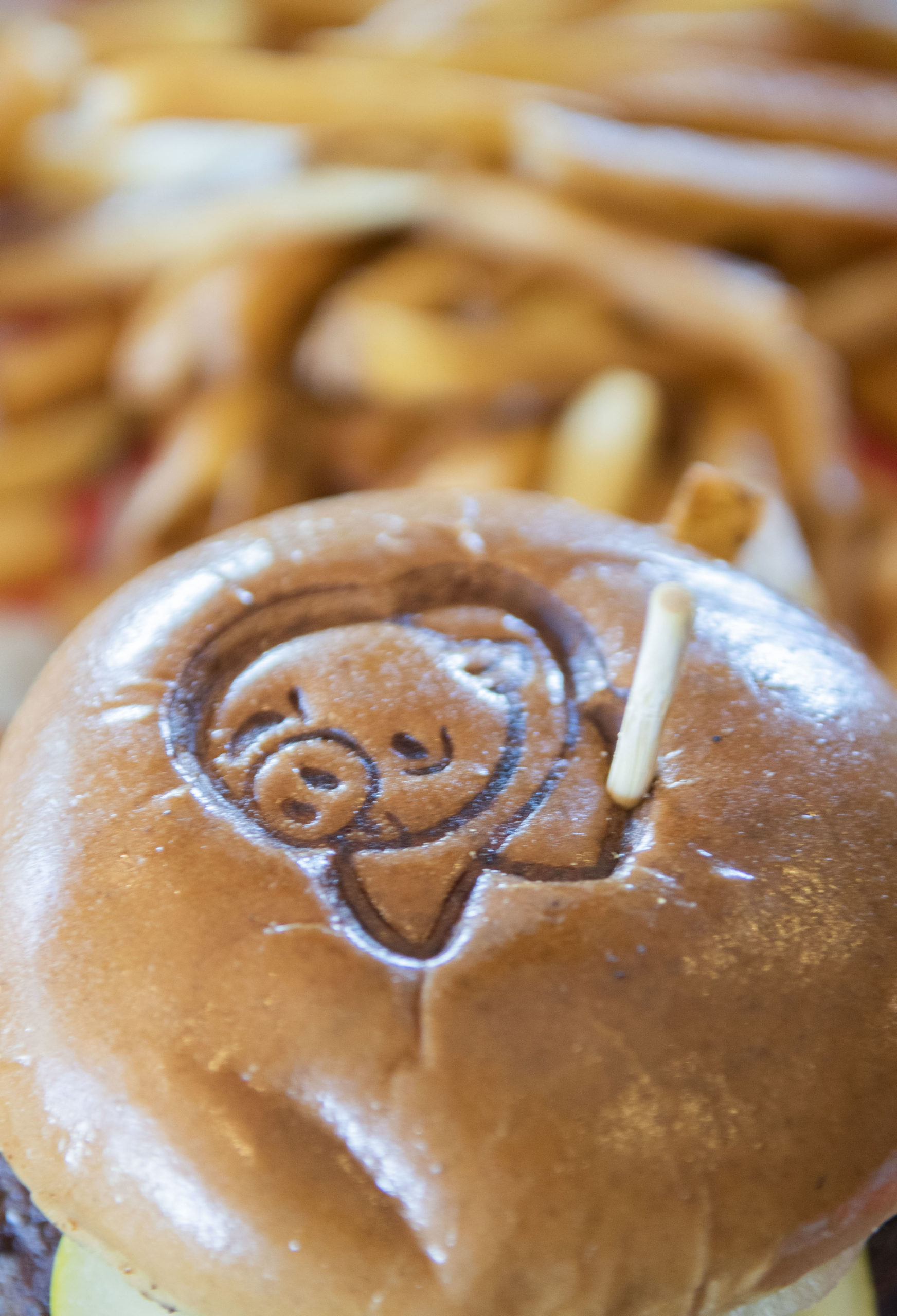 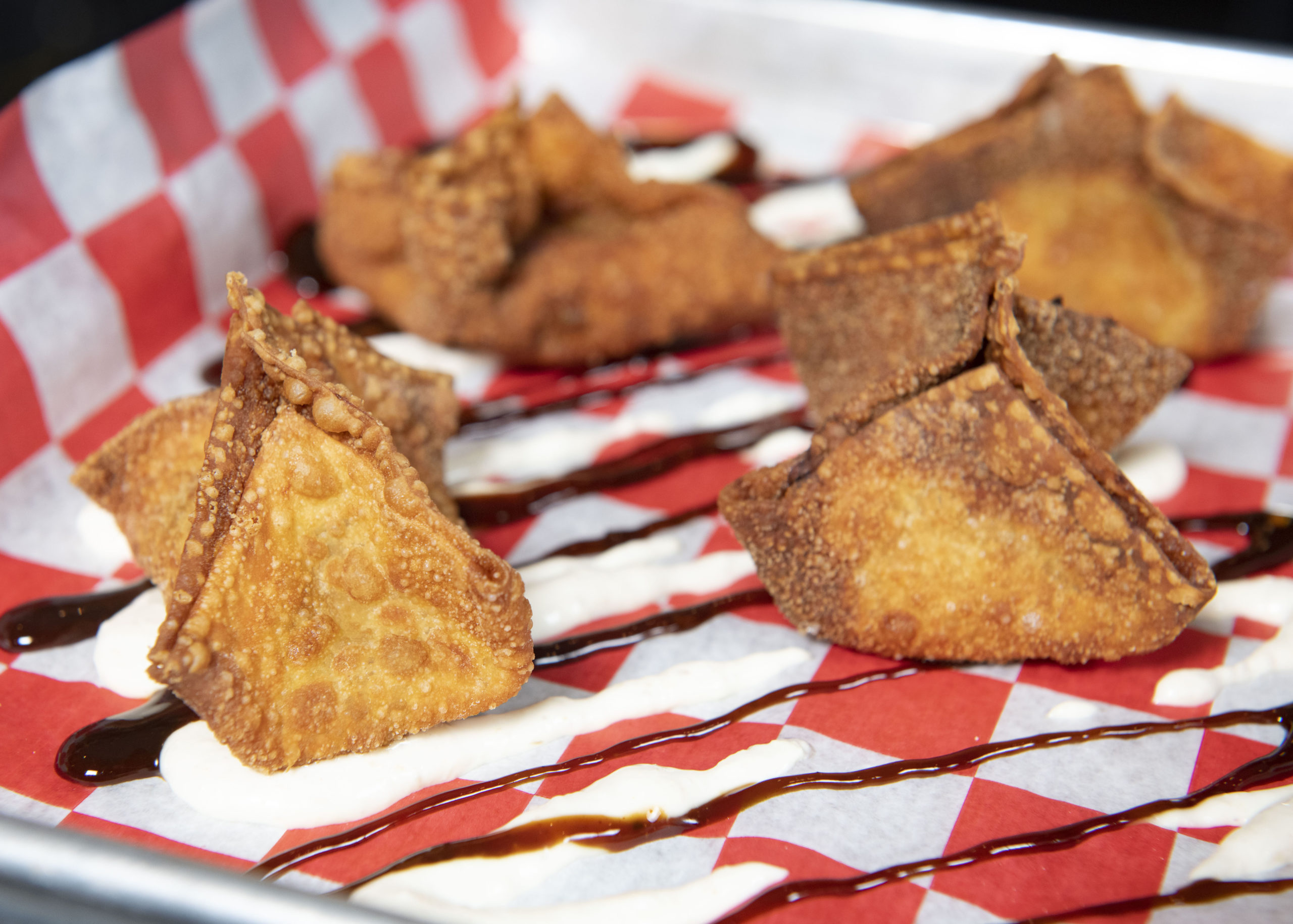 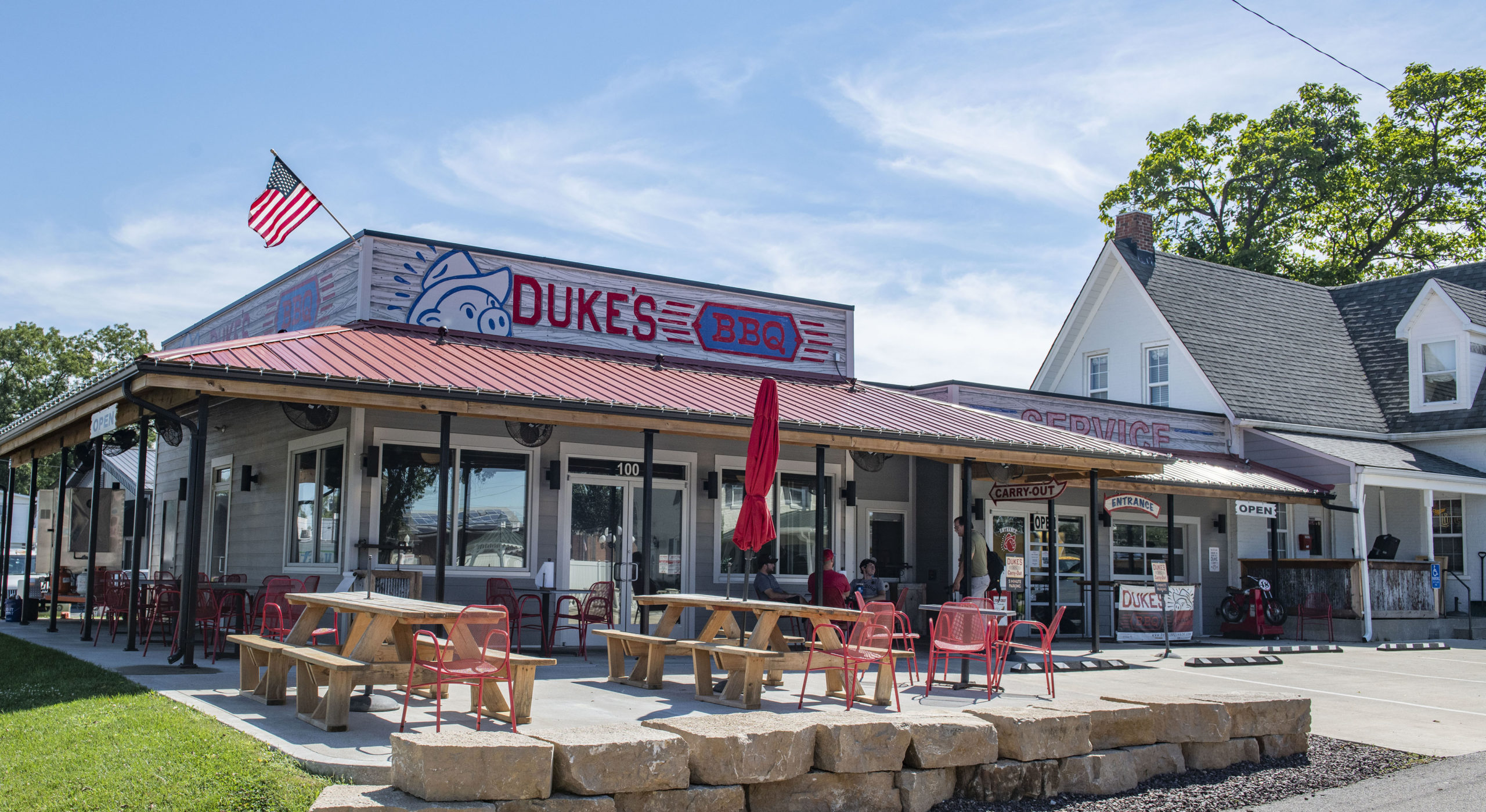 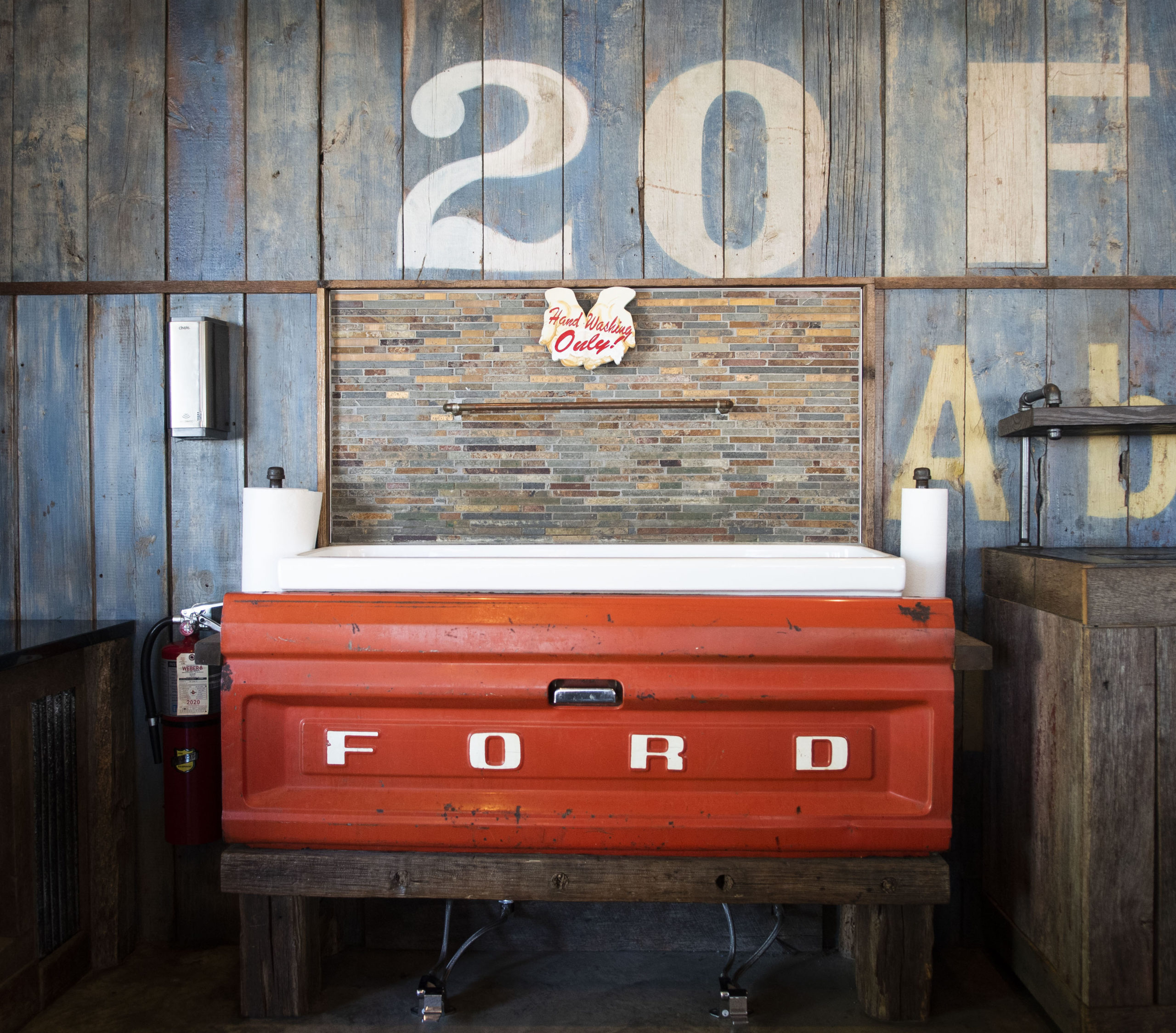 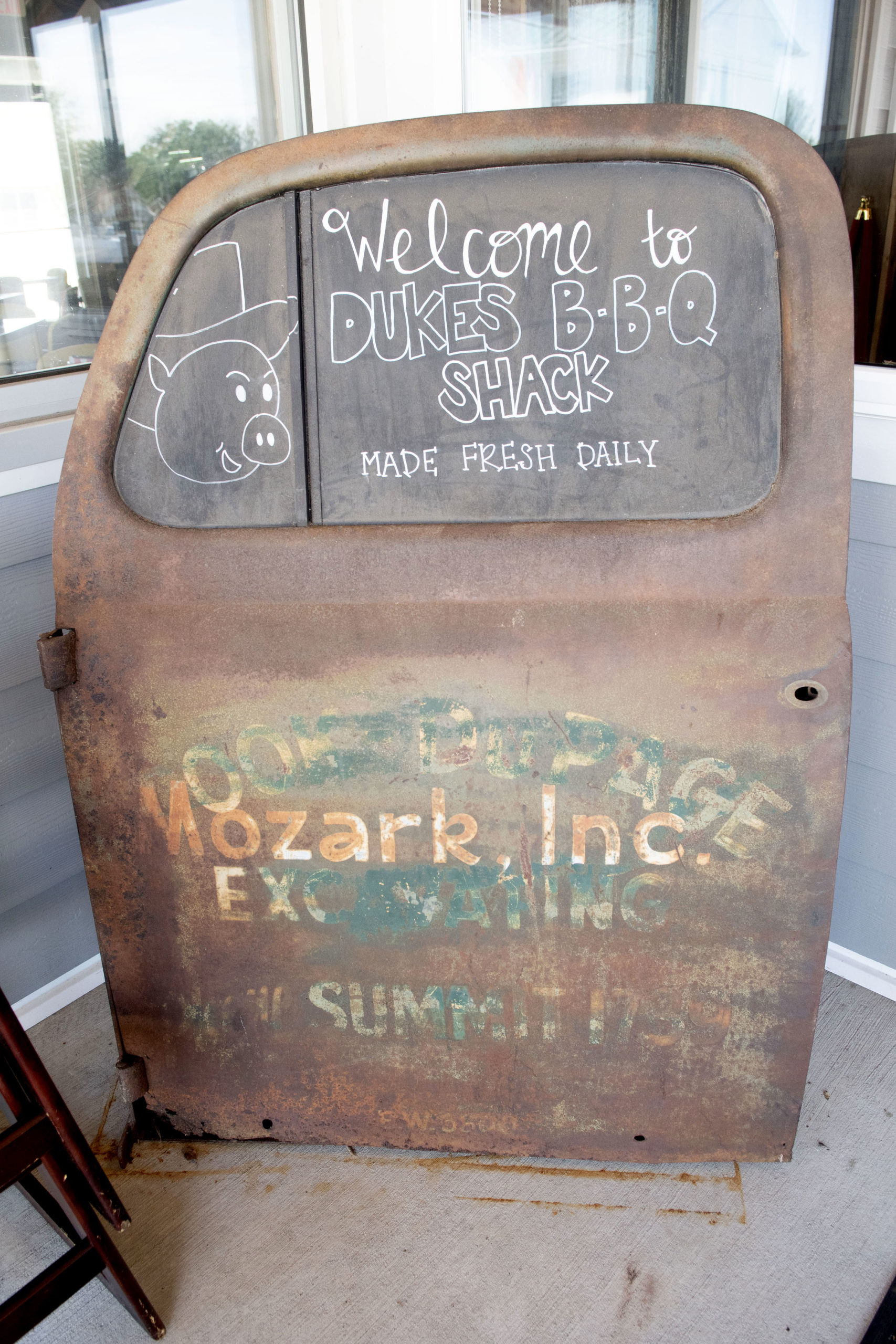 The homemade sauces and sides definitely aren’t afterthoughts at Duke’s. There’s a quartet of sauces including the sweet and smoky Duke’s Original, Carolina mustard Golden Duke, spicy Put Up Your Duke’s and the creamy horseradish-flavored Alabama White.

Almost all the sides have at least a touch of smoke included. The most popular is the Smoky Gouda Potato Casserole. Other tasty options are the Smoked White Cheddar Mac and Cheese, smoked beans with bites of pulled pork or coleslaw made with vinegar, pickled jalapeno, Brussels sprouts, corn and a little bit of mayonnaise.

“We wanted something that really complements all of the hard work we put into our smoked meats,” Peter says. “We put a lot of time and effort into the sides, but we wouldn’t change any of it. Don’t want anything out of a can or bag that was frozen. People can recognize that.”

That extra work and spending the time sourcing meats locally might not be the easiest or the cheapest route for Peter, but it is the right thing to do, he says.

“Everything is fresh or coming out of the smoker; that’s something we pride ourselves on,” he says. “It’s important to give that quality of food to people. Food is art to me, everything needs to look and taste the same. The chef and pit crew do their best to make that happen day after day.”