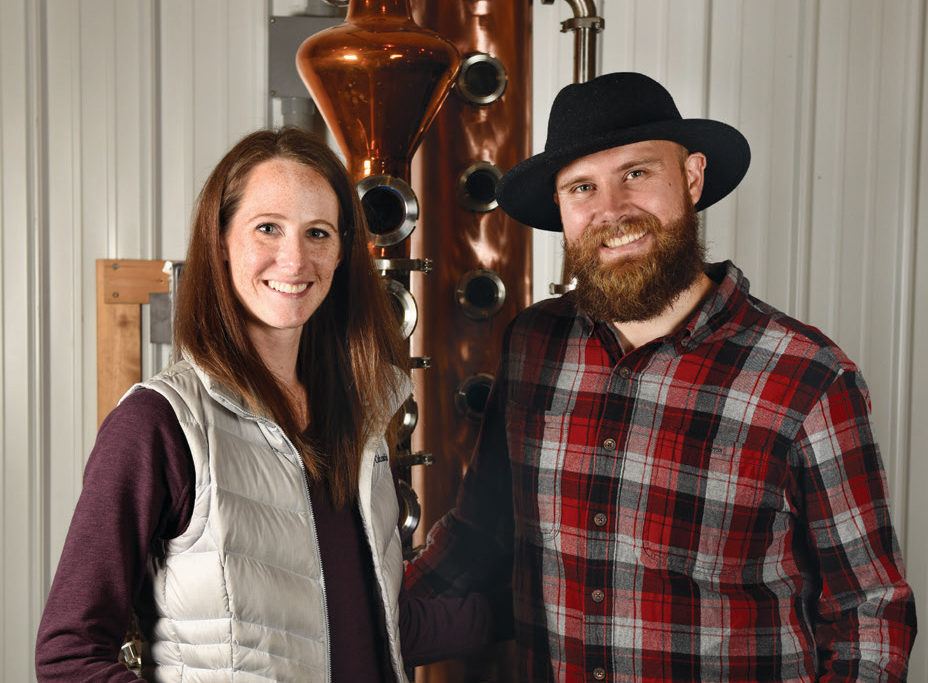 Nobletons embraces the world of rum

Good things come to those who wait, and no one knows that better than Demetrius Cain. He often waits months for his efforts to come to fruition. But his patient nature — and a bit of chemist-like wizardry — make it all worthwhile.

Demetrius and his wife, Laura, own Nobletons Distilling House in Beaufort, a place where rums smoother than silk are born.

Originally from Oregon, Demetrius grew up on a farm knowing one day he wanted to own his own farm and raise his family away from the hustle and bustle of city life. So when he and Laura married and moved to Missouri to be near her family, Demetrius found some land which fit the bill. A former financial planner by day and bartender by night, the Crawford Electric Cooperative member says it was at his wife’s urging that he finally began to pursue his dream one step at a time. In 2018, Nobletons was born.

Demetrius points to a gleaming copper and stainless steel Armagnac-style still in the shop. “We pieced everything together ourselves so we wouldn’t have to make a huge investment in equipment,” says the 32-year-old. “We probably could have found big investors, but we thought we’d lose control of the integrity of our product. So we’re taking it slow, and it’s proving worth the wait.” 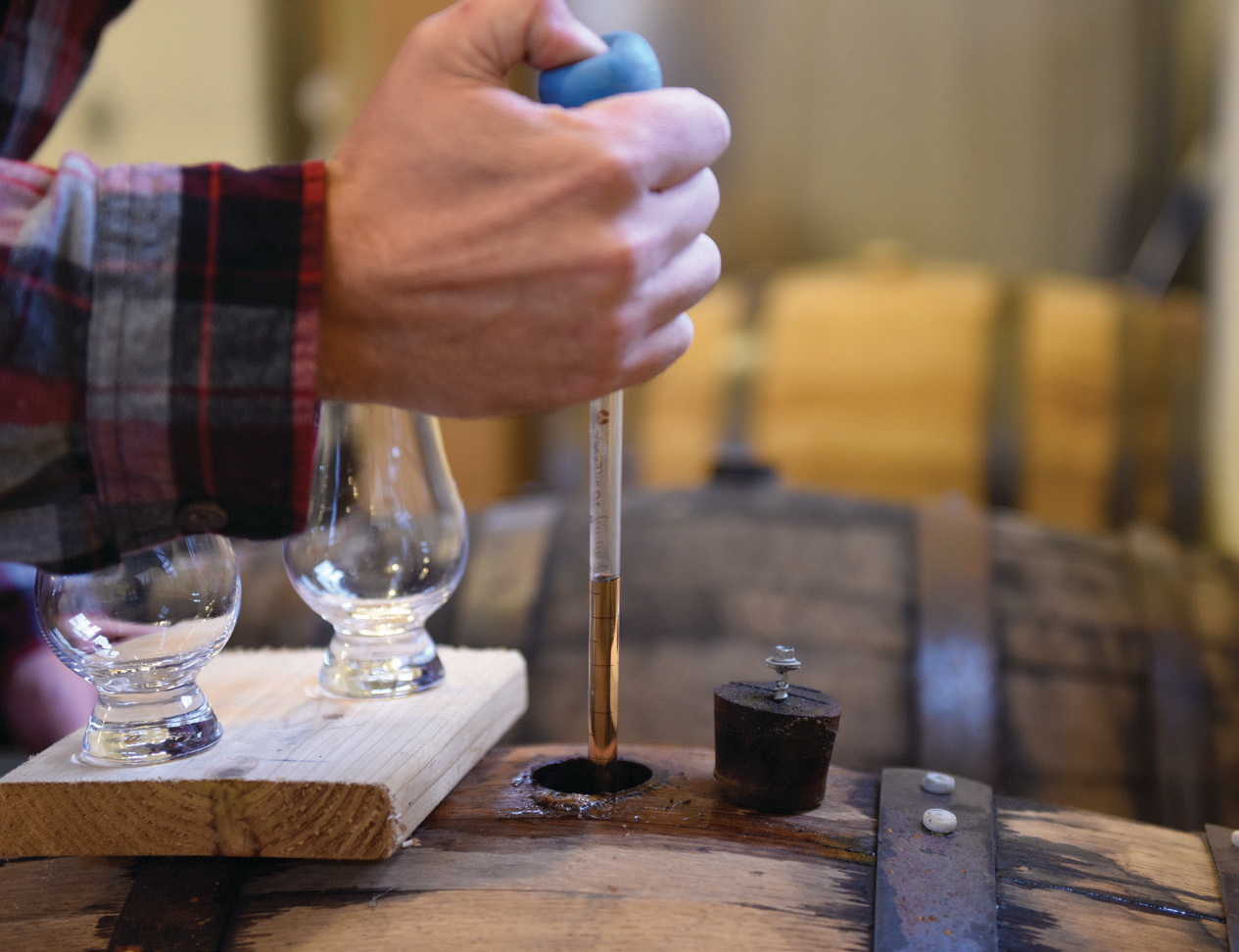 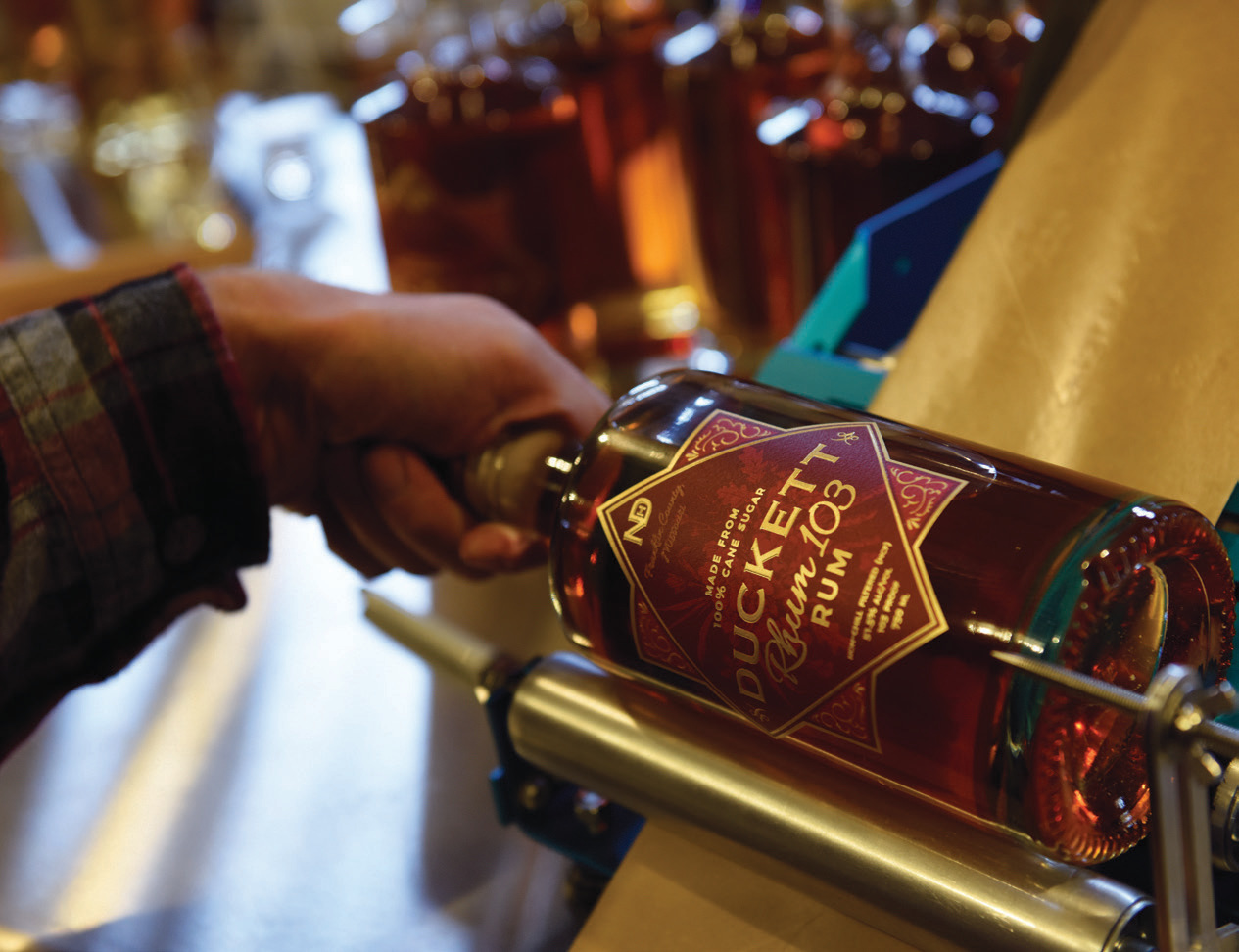 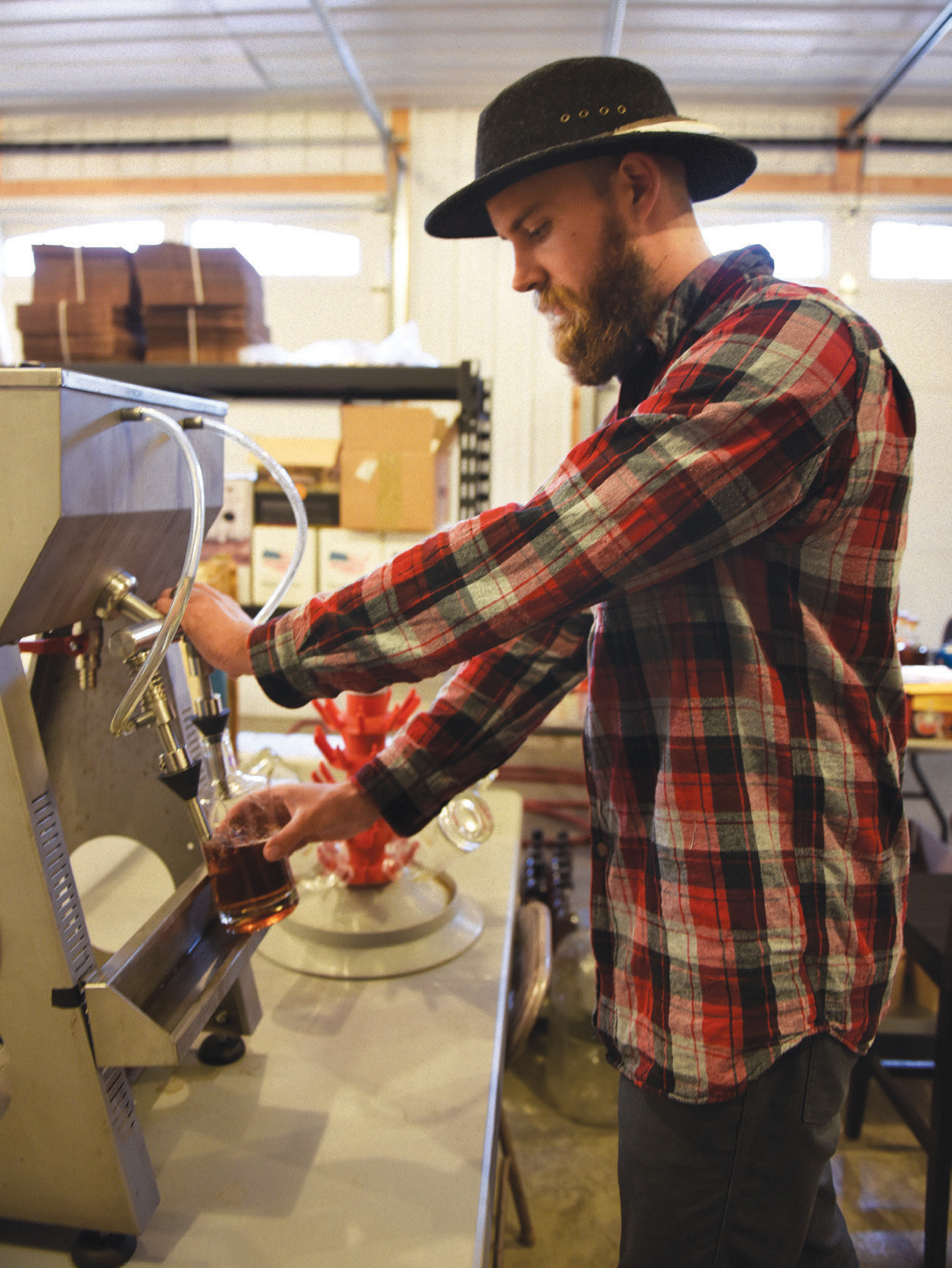 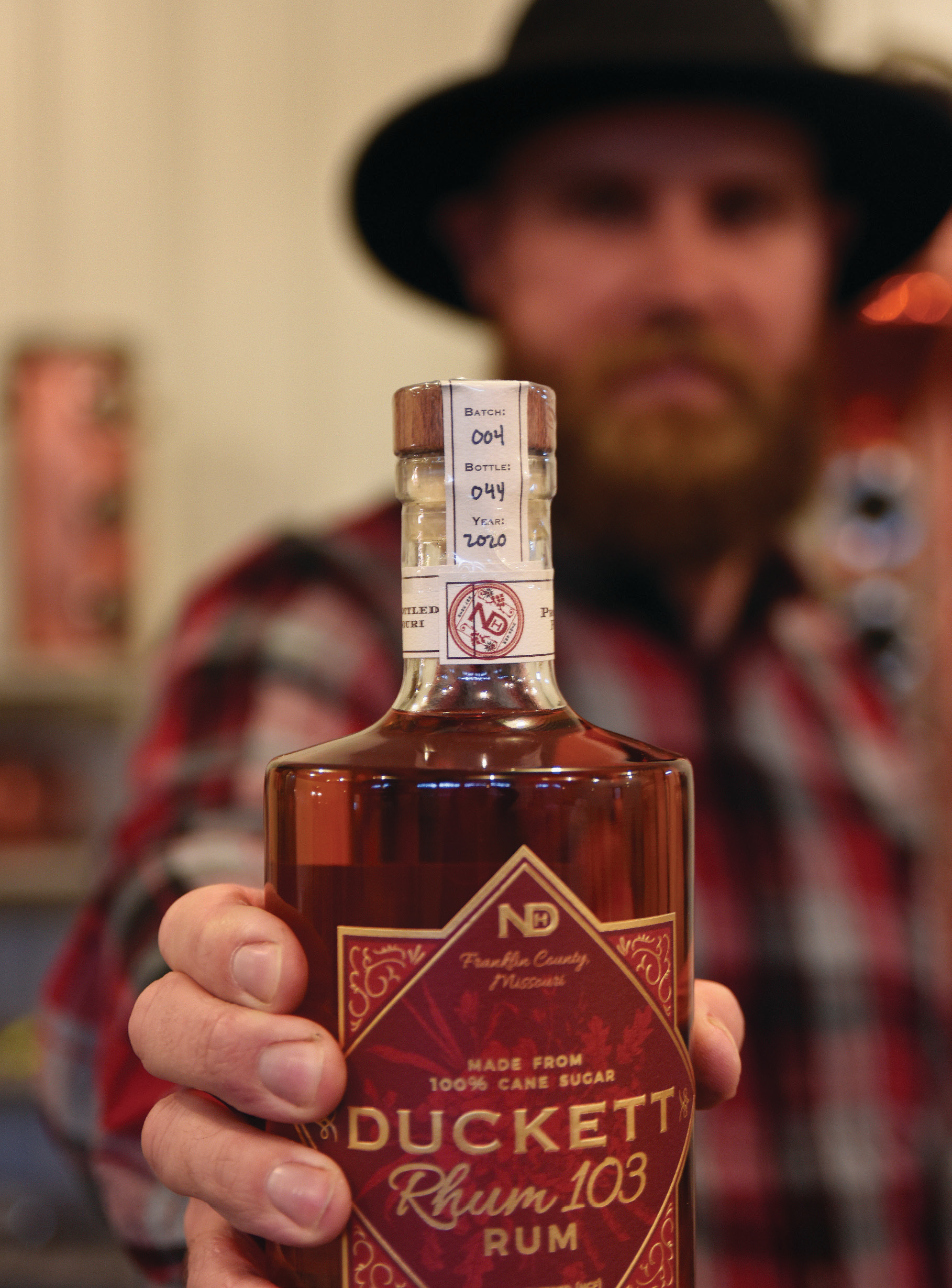 Since releasing their first white rum in 2019, bar and restaurant owners are taking notice of Nobletons’ spirits.

Tim Wiggins, a St. Louis restaurant and bar co-owner, says it was by chance he even found out about Nobletons.

“At the time, he and my wife worked in the same place,” Tim says. “He had given her a Mason jar of something he’d created and she said I should try it.”

Eventually Demetrius went to meet Tim and talk about the rums he was creating.

“It was just what I was looking for in a rum,” Tim says. “I was impressed by how he distilled it, his integrity and his mission of staying pure to an agricole-style of rum making that is rarely seen in the United States.”

Rhum Agricole is the French term for rum made with sugar cane juice. The use of the word “rhum” on Nobletons labels is a nod to the French West Indies style rhum Demetrius has grown to prefer over the years.

“He could make rum from molasses like everyone else and cut out a lot of steps, but that’s not Demetrius,” Tim says. “He won’t take shortcuts.”

The rum line is named after Demetrius’s grandfather, Jack Myron Duckett. Most rum is made with molasses, but Demetrius only uses sugar cane. He describes their line as “cane-to-glass.” Sticking to a small-batch approach, the owner takes the time to locally source when possible.

“A company in Washington, Missouri helped with the fabrication of our distiller,” says Demetrius. It’s important to him to know who has a part in Nobletons’ process, right down to the person who makes the bottle stoppers, the bottles they buy and where the labels are printed. “Even the copper for our distiller was mined in Missouri.”

Demetrius also has Nobletons’ sugar cane grown, cut and processed on a family farm in the state of Louisiana so the rum has the consistency of flavor he desires.

The rum maker says even with only one still, Nobletons produces around 800 gallons of sugar cane wine per day, which equals about a barrel of spirits for aging. The rums are then aged in wood barrels for 48 days, much longer than most distilleries’ quick 24-to 48-hour turnaround. This helps develop the profile and smooth texture the Nobletons rums offer.

Demetrius describes the Duckett Blue rum as an “un-aged spirit that is perfect for adding to cocktails.” The Duckett Golden Rhum is described as a ‘light, crisp but dry rum with hints of caramel and toffee,’ while Duckett Rhum 103 is a more mature rum, according to Demetrius. “I call it your bourbon-lovers rum,” he adds.

As Nobletons rum ages, the owner continues to work on new creations. Currently aging in barrels is a wickedly delicious orange liqueur called Duckett Curacao Noir, which Demetrius plans to release as a small batch option this year. Savory rums and a tasting room are in the plans, too.

Nobletons’ line is currently only found across Missouri and Kansas, but can be located through their website. Bottles sell for $25 and up.

As for the source of the name Nobletons, Demetrius says it’s based upon a toast among friends. “For the noble character of those whose company we keep and for life well-lived,” says the rum maker.

“Our process takes time,” says Demetrius, “but we like to think it’s well worth the wait.”