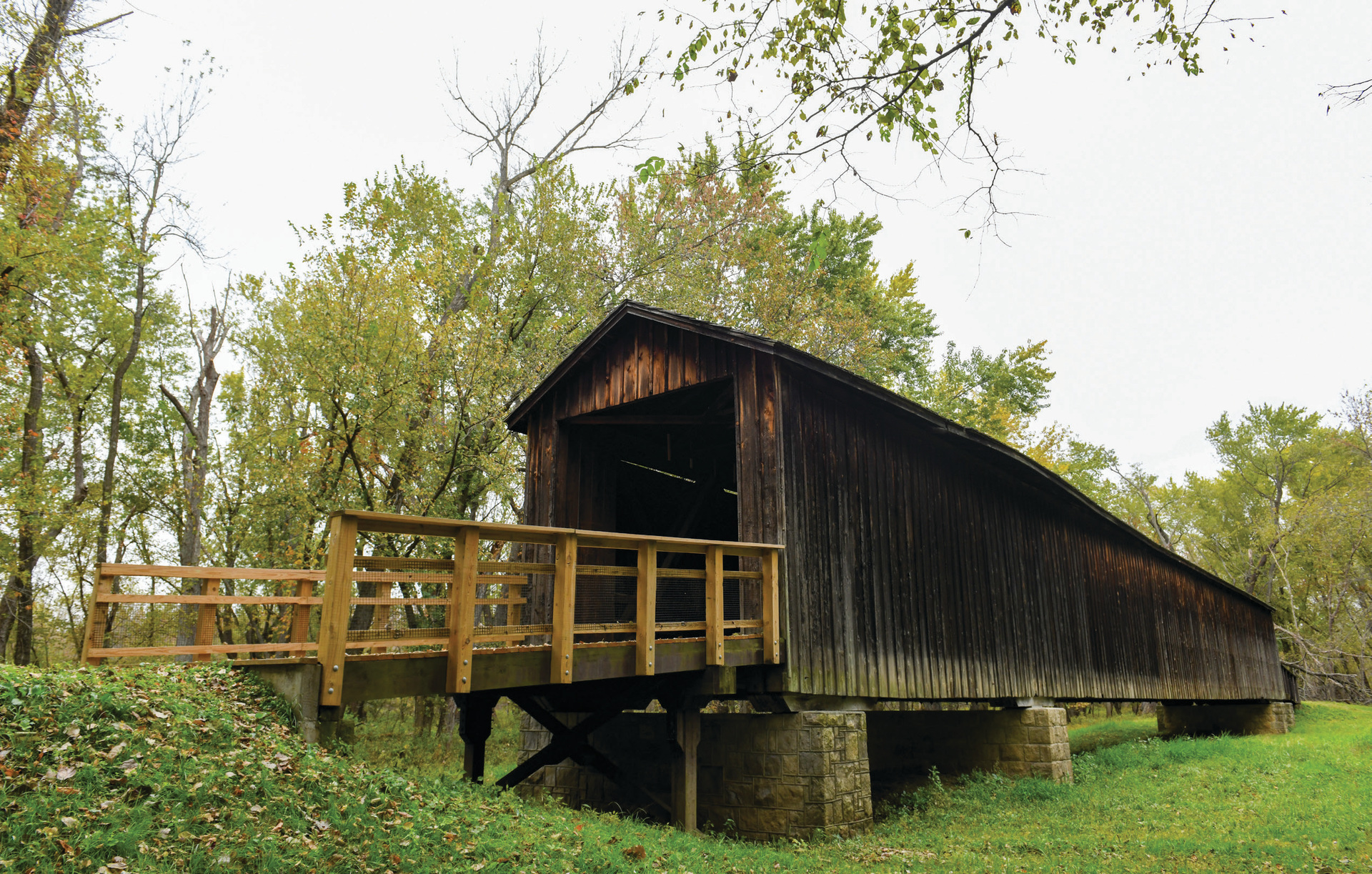 These days if someone recalls a covered bridge, they’re likely to think of the Roseman Covered Bridge in Iowa romanticized by Clint Eastwood’s and Meryl Streep’s characters, magazine photographer Robert Kincaid and farm wife Francesca Johnson, in the movie “The Bridges of Madison County.”

Those who haven’t seen one of the iconic structures or experienced the clip-clop of horses’ hooves or wagon wheels crossing wooden bridges are missing out on a great slice of Americana. The water crossings led many generations down dirt roads, serving as highways to rural towns and taking families to country churches and to visit relatives.

According to state records, Missouri had an estimated 30 covered bridges in the 1800s.

By May 1967, only five remained. All were slated for preservation as Missouri State Historic Sites. Sadly, floodwaters took out the Mexico Road Covered Bridge. However the remaining four were preserved by the Department of Natural Resources for future generations.

Originally known as Linn County Bridge, the Locust Creek Covered Bridge in Laclede is the longest of the Show-Me State’s remaining historic bridges, measuring 151 feet long. Built in 1868 from white pine, the bridge used to be part of Route 8, one of the nation’s first transcontinental highway. The route was well traveled until U.S. Highway 36 came along in 1930. After that, the bridge was usually bypassed by travelers.

The path of Locust Creek also changed through the years, leaving the wooden bridge to sit on mud banks much of the time.

When the state of Missouri acquired the bridge in 1968, it was named as an historic site. The bridge was salvaged from the muddy muck and repaired. And in 2001, Missouri State Parks raised the bridge by 6 feet to protect the structure from any future damage. The effort gives the now “bridge to nowhere” an appearance of once again spanning water, as well as keeping it well away from more damage caused by sitting on the ground below. 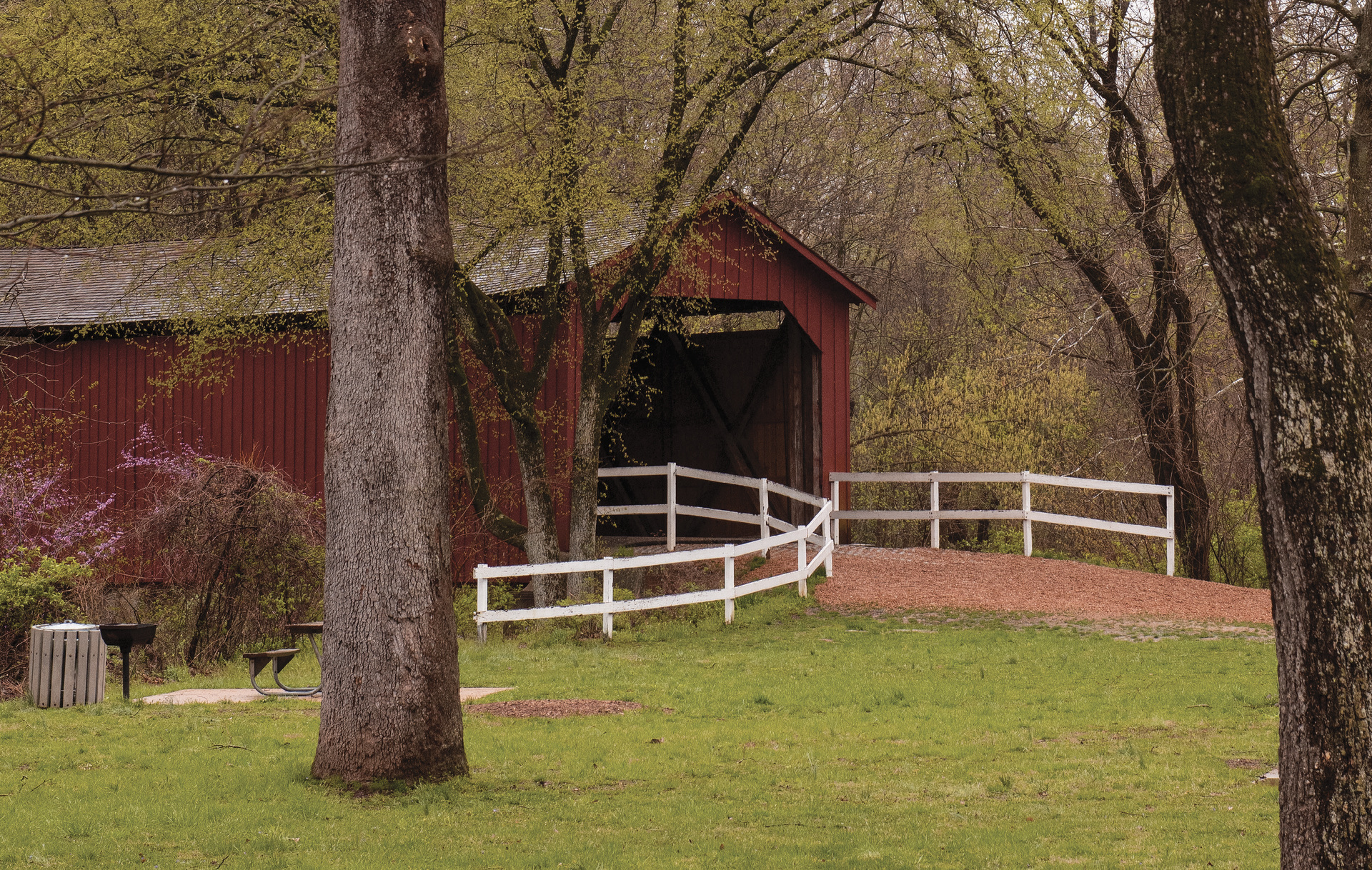 Sandy Creek Covered Bridge is Missouri’s only red covered bridge. Built in 1872, this gem is hidden away in Hillsboro.

This 76-foot-long red relic is located in Jefferson County and nearly hidden away near Hillsboro in a small park setting. Built in 1872, this bridge was the last of Missouri’s remaining four to be built.

Often referred to by locals as the Lemay Ferry Bridge, the white pine icon was torn apart by a spring floodwaters in 1886, but quick-thinking locals salvaged much of the original lumber for use in the rebuild. The original wooden piers for the bridge were replaced with concrete in 1940, and further renovations were done in 1952 and 1984 to keep Missouri’s only red covered bridge in good shape. Today, the bridge is only open to pedestrian traffic.

Along with Locust Creek and Burfordville, the Sandy Creek Covered Bridge utilizes the Howe truss design.

“It’s in the same original spot. The neighborhood just built up around it through the years,” says Brian.

A shaded picnic area along Sandy Creek offers visitors a beautiful place to enjoy the site, as well as a short trail loop to walk. 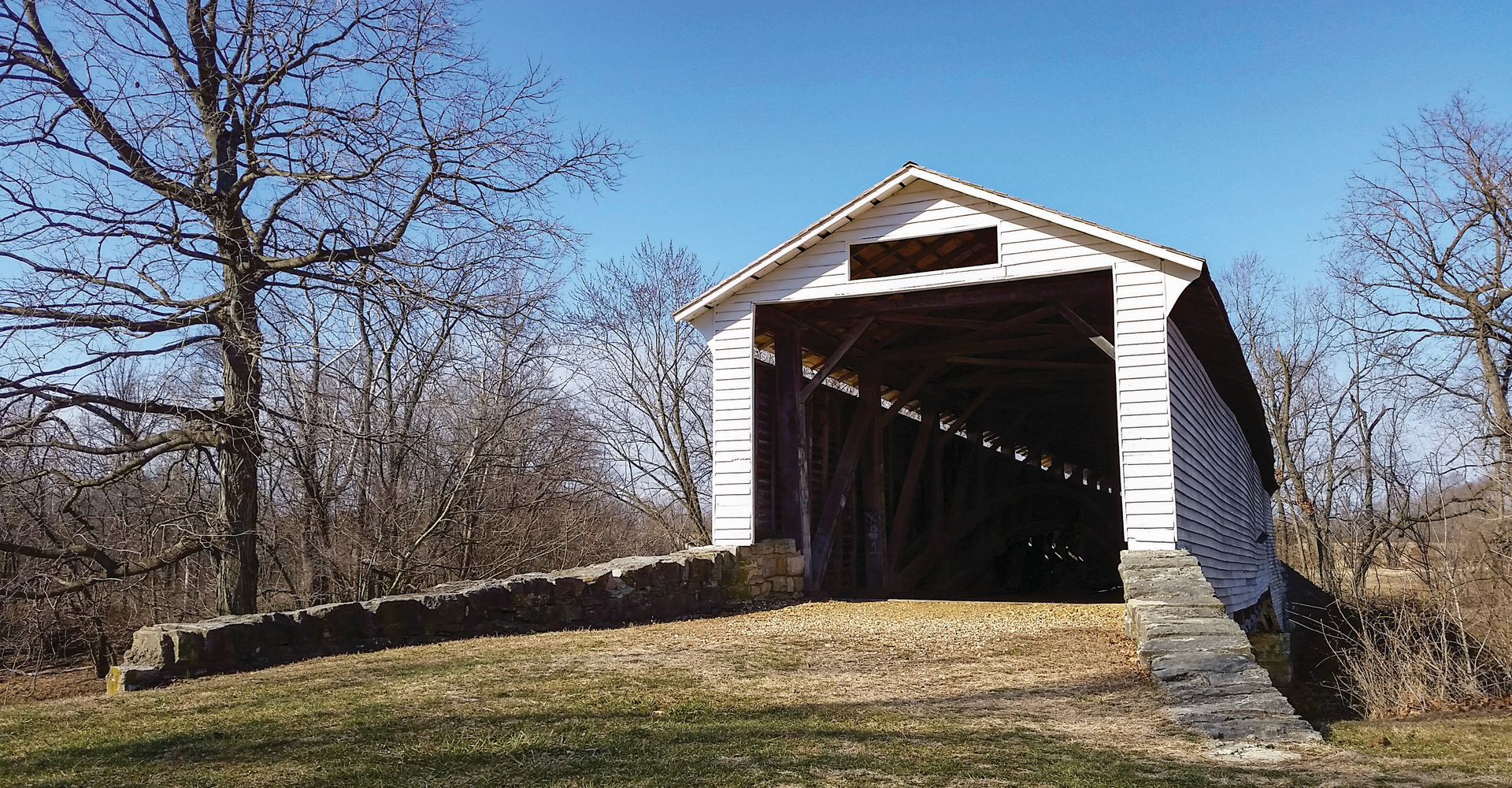 Built in 1871, the Union Covered Bridge, located in Paris, offers pedestrians a picturesque place to pause and enjoy the Elk Fork of the Salt River.

Built in 1871, the Union Covered Bridge is the only one of the state’s remaining covered bridges to showcase the unique style of architect Theodore Burr.

“This is the only covered bridge in Missouri with a double Burr-arch truss design,” says Jim Rehard, deputy director for the northern district of Missouri State Parks. “I think it’s one of our most picturesque bridges.”

The bridge spans the Elk Fork of the Salt River and still offers pedestrians a beautiful respite near Paris. It once served as the path between Paris and Fayette and was named for the Union Church located nearby.

In the late 1960s, a flood washed away nearby Mexico Covered Bridge. Some of the materials salvaged from that bridge were used for the upkeep of the Union bridge.

The 120-foot-long bridge was closed to vehicle traffic in 1970 when the structure was discovered to be damaged by overweight trucks. The bridge was restored in 1988 but nearly washed away again by a flood in 2008. Quick thinking employees removed some of the lower siding on the bridge to allow rising flood waters to flow through, sparing the full impact of the brisk current. “It was a bit spooky because you could feel the bridge moving as the water rushed the sides,” Jim recalls. “I wasn’t sure it was going to withstand the floodwater.”

Fundraising efforts began soon after the deluge, with the last complete restoration of Union Covered Bridge taking place in 2018. 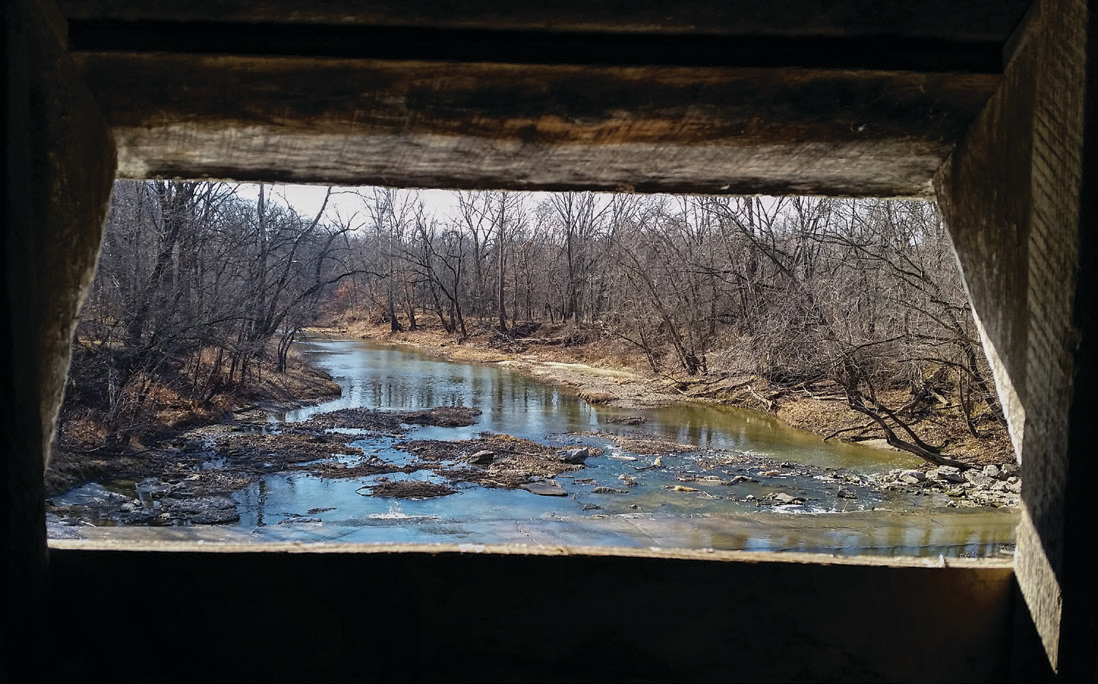 “It was a bit spooky because you could feel the bridge moving as the water rushed the sides.”
— Jim Rehard 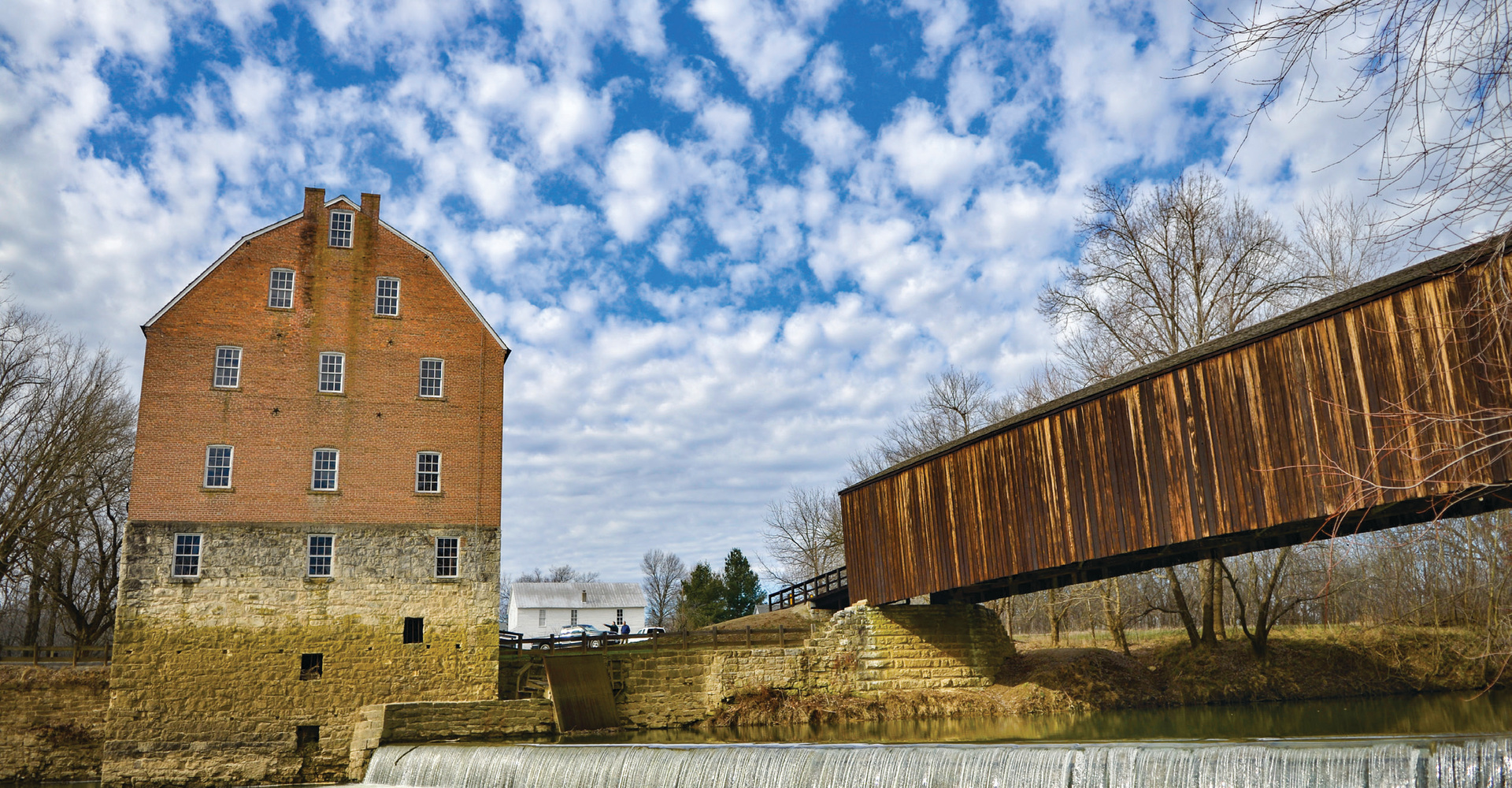 The Burfordville Covered Bridge is a favorite of visitors because it is located next to the historic grain mill by the Whitewater River.

When you visit the beautiful grounds of the Bollinger Mill State Historic Site near Cape Girardeau, take time to study one of Missouri’s oldest remaining covered bridges.

The Burfordville Covered Bridge dates to 1858, before the Civil War. It is located next to the grain mill in downtown Burfordville. It seems to transport visitors back to a simpler time when harvests of grain were taken by wagon loads across the 140-foot-long wooden bridge to be ground into flour.

Built by Joseph Lansmon, the bridge isn’t mentioned until newspaper accounts of the burning of the original Bollinger Mill in 1861. Fans of architecture will enjoy seeing the original Howe-truss system which was used to build the historic bridge. The unique truss style was created by architect William Howe and often used for bridge building in the day.

“The benefit of Howe’s design was how it held the bridge together tightly, from top to bottom, to protect it against the elements,” says Brian.

The Burfordville Covered Bridge was made from locally sourced yellow poplar. It began life as part of a toll road over the Whitewater River.

The bridge was damaged by the flood of 1986 and closed to all traffic until 1998 when major repairs were completed. Now open for pedestrians year-round, the bridge and mill are one of the most highly sought after locations for both photographers and painters alike. 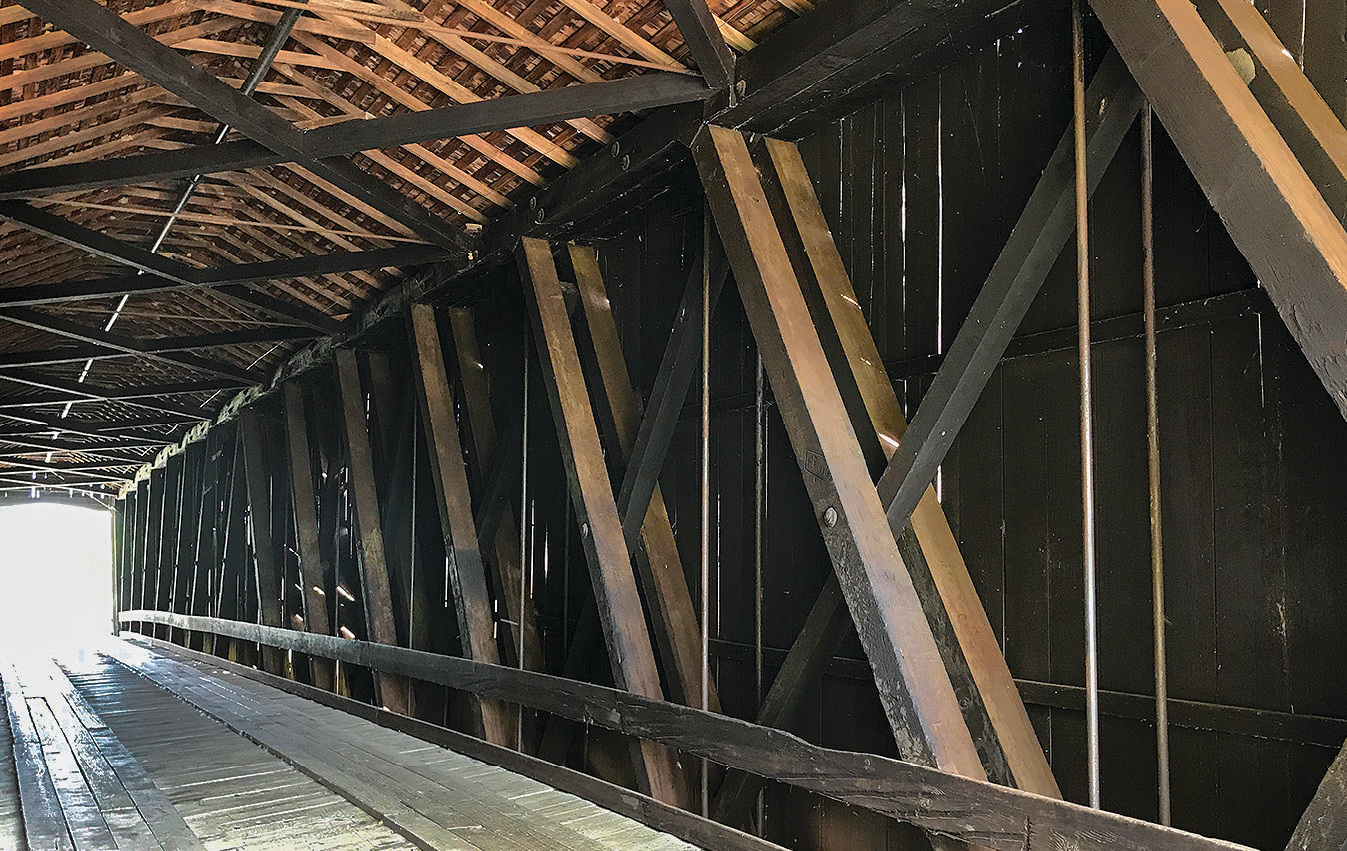 “I think people have a natural curiosity about covered bridges. They offer charm in a beautiful, natural setting”
—–Brian Stith

We recommend calling ahead before traveling to make sure sites are open for foot traffic.