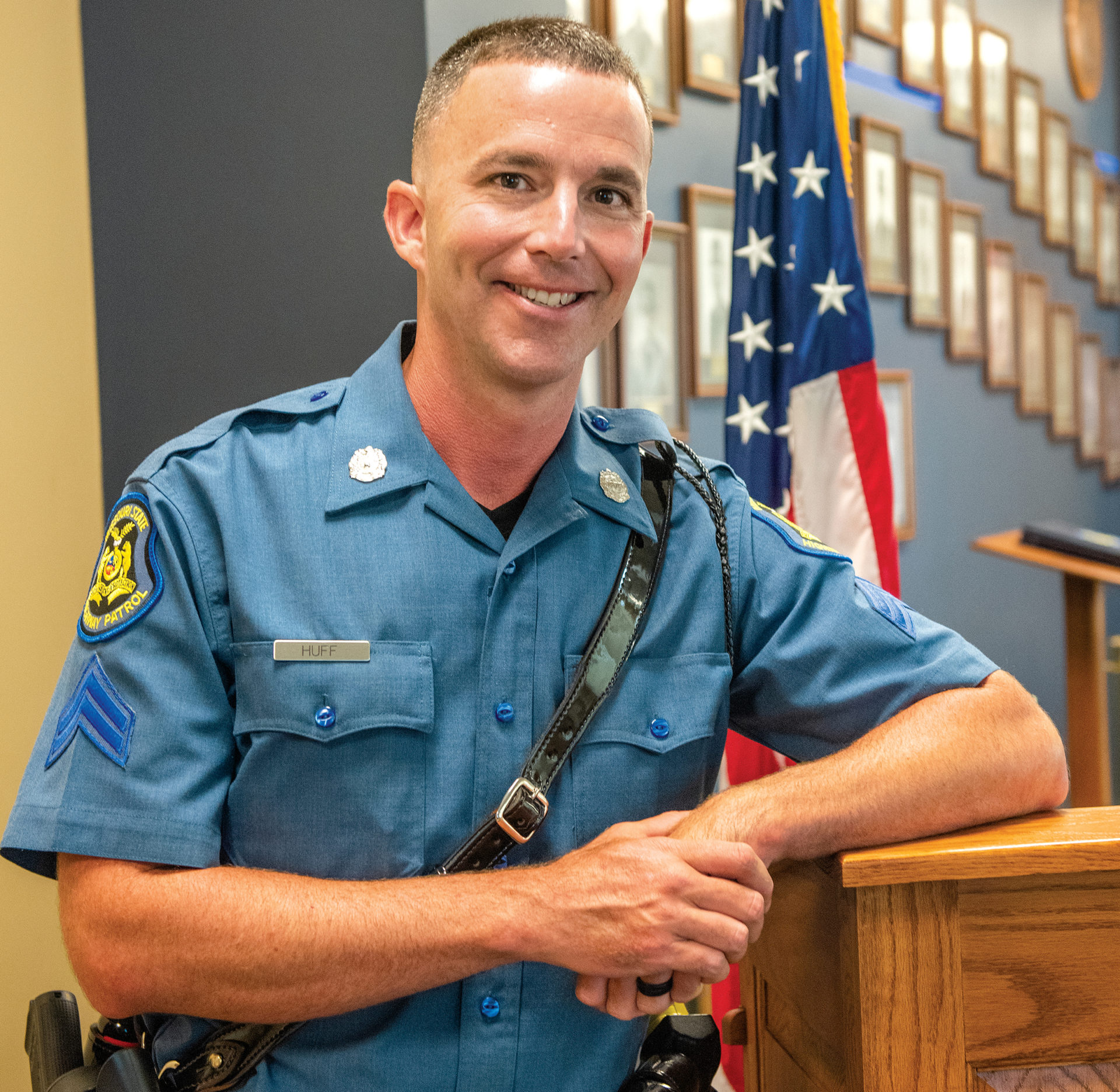 A traffic stop that ended with more than a ticket

It was after 10 p.m. one hot Sunday night in August 2020. Missouri Highway Patrol Cpl. Jeffrey W. Huff was westbound on Interstate 70 when the headlights of a speeding car quickly came up behind him.

“I clocked the car at 113 mph in a 65 zone,” recalls the patrolman. “The driver seemed to know what he’d done, immediately slamming on the brakes and pulling over.”

According to the patrolman, the driver — a 16-year-old boy — was alone in the car and seemed depressed. He brought the teen back to his patrol car while he processed paperwork for the impending ticket. While he worked, the corporal started a conversation with the boy, inquiring why he was driving so fast and why he was out so late.

“Eventually he started sharing he was headed down to the World War I museum and that he ‘wanted to clear his head,’ ” says Jeffrey.

The chance conversation ended up saving the teen’s life when he opened up to the patrolman about his plan to end his life that night.
The patrolman reminded the teen that it was after 11 p.m. and the museum was closed. Jeffrey then told the kid, “Just so you know, you’re calling your parents, so go ahead and call them.”

While the trooper continued processing the paperwork, he could overhear much of the conversation between the teen and his father. Soon the trooper asked the teen for the phone so he could talk to his dad and go over the incident details. 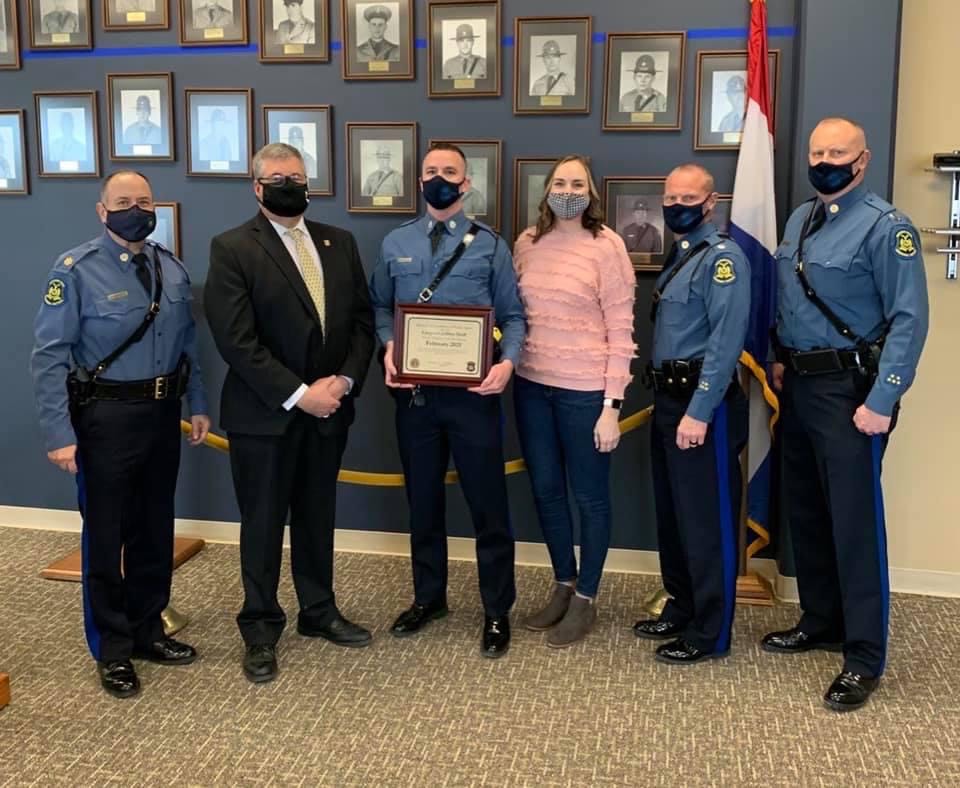 “I can’t make parents come to the scene, but I always ask if they’d like to come pick their teen up,” Jeffrey shares. “His parents said they’d come right away.”

As they waited, the officer kept asking questions, trying to get a handle on what was going on in the teen’s mind. Further questions revealed the teen had been isolated at home due to having COVID-19, even missing football practice. Jeffrey eventually learned the teen recently had a heated argument with his best friend over a girl they both liked.

“I think a lot of factors played into how emotional and depressed he felt, the common factor being the girl. While it might not seem like a big problem, to him it was,” says the patrolman.
Eventually the boy shared that he had planned to go to the memorial, climb to the top and jump off to kill himself.

Hearing this, the patrolman took a deep breath and began to share from his own personal experience.

“Listen,” Jeffrey began, “I had a brother who committed suicide. While it may seem like an easy choice for you, your decision touches many lives. It won’t solve anything.”

The teen’s parents soon arrived and heard of their son’s plan to commit suicide. They planned to take him straight to a hospital for evaluation.
To the officer’s surprise, the teen’s mother called the next day, stating they could never thank the officer enough for all he’d done for their son. She said her son had told her, “That trooper saved my life tonight.”

Jeffrey says that’s the last he heard from the family but is glad they got their son the help he needed.

“That entire stop probably took 30 minutes, but having empathy in the situation made a world of difference to that boy,” says Jeffrey.

Earlier this year, the patrolman was chosen as the Department of Public Safety Employee of the Month. The time he took to listen and help someone in crisis falls under one of the eight core values of the Missouri Highway Patrol: compassion. He chose to listen to the teen and chose to get involved on a personal level by sharing his family’s own story of loss.

As a husband and father, the 38-year-old trooper, based at Troop A in Lee’s Summit, strives daily to embrace the eight core values set by the Missouri Highway Patrol: integrity, responsibility, respect, professionalism, compassion, resourcefulness, character and commitment.

When asked, Jeffrey is open to sharing the story of his own brother Kenny’s depression which drove him to take his life. “Everyone’s situation is different. In my brother’s life, it was a series of events that caused a domino effect that ended in tragedy.”

The trooper’s goal is to make people aware that there is help available for those who need it — as well as advice we can all apply in life.

“It didn’t take a lot for me to pick up on the clues this boy offered,” Jeffrey says. “But it did require me to listen, with my heart and my ears.

“Some of the best advice I can offer is for people to think about what they say. An offhanded ‘I’m going to kill myself’ or ‘I’d rather die’ isn’t so funny when you find out the person next to you might be thinking about it,” Jeffrey says. “Life is harder for some people than others. Be a human being and treat other people with respect. You don’t know what someone else might be facing in life. Maybe just listening could make the difference.”

The National Suicide Prevention Lifeline offers free and confidential support for people in distress. For resources, call 800-273-8255 or go to www.suicidepreventionlifeline.org. Help is available 24/7.