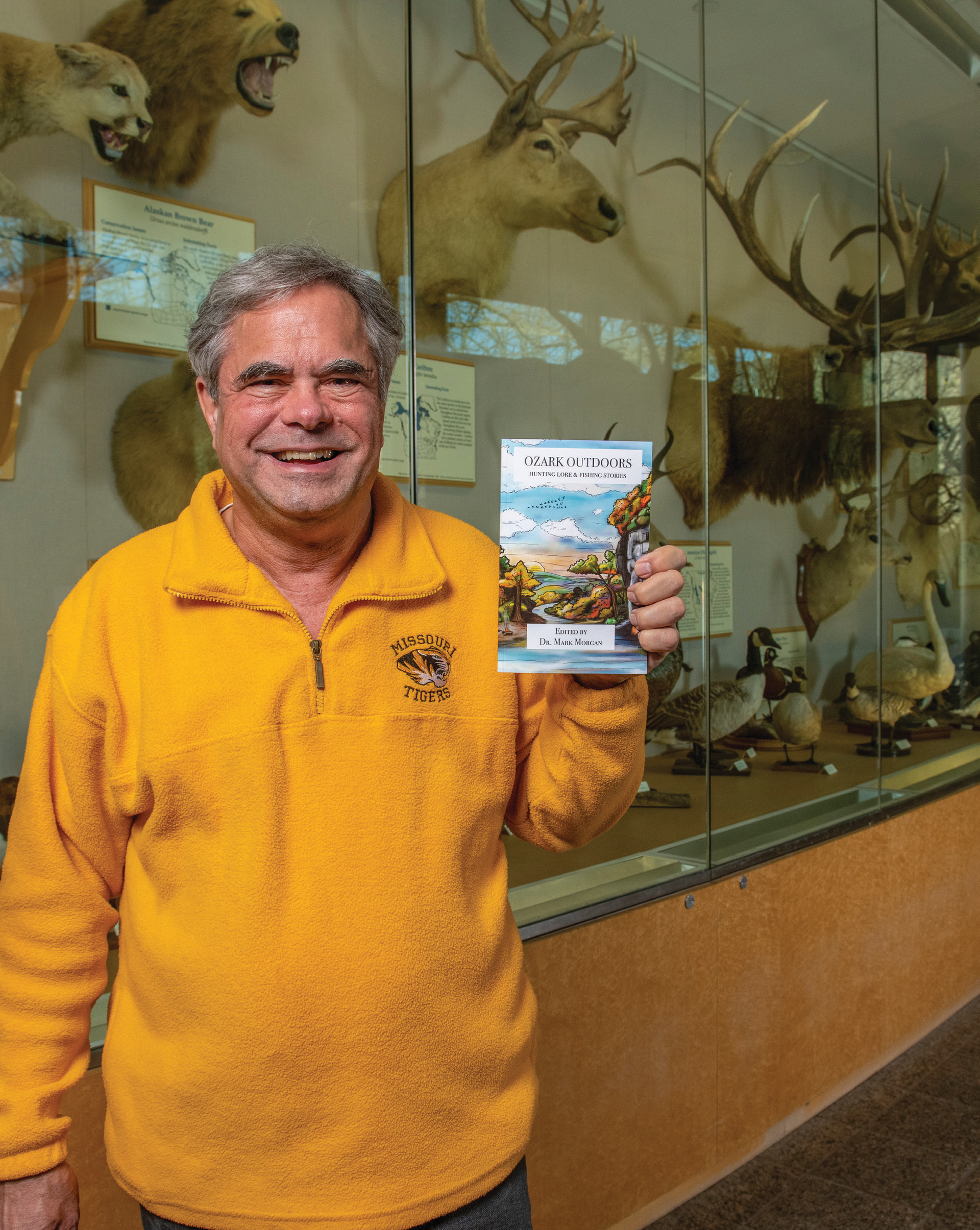 The phrase, “Give a man a fish and you feed him for a day. Teach a man to fish and you feed him for a lifetime,” has an unwritten addendum: “And if the fish gets away, the angler’s likely to lie about it.” For Mark Morgan, the story of the one that gets away is sometimes just as good or better than the one that didn’t because like any angler, he’s a sucker for a good fish tale.

Mark, an associate professor at the University of Missouri’s School of Natural Resources, is no stranger to Missouri’s outdoors. Inspired by the works of folklorist Vance Randolph and his own experiences, he collected and compiled a book of Missouri fishing tales, “Hook, Line and Sinker,” in 2013. It wasn’t long before he planned the follow-up, to focus on the Ozarks region of Missouri, Arkansas and Oklahoma. The result, titled “Ozark Outdoors,” is a book of historical and modern fishing and hunting stories intended to pay tribute to the area’s natural legacy and promote its role in outdoor tourism.

“There are a lot of natural resources here that kind of get overlooked compared to the commercial destinations,” Mark says. “The goal for state agencies is reactivating that interest in the outdoors for people. Storytelling is a way of doing that.”

To lend historical perspective on what the Ozarks were like for early outdoorsmen, Mark relied on the hunting and fishing accounts of a few who recorded their experiences: Henry Rowe Schoolcraft, George Featherstonhaugh, Theodore Russell and Silas Turnbo.

Featherstonaugh’s accounts made during Missouri’s early statehood relate sightings of Carolina parakeets, passenger pigeons and ivory billed woodpeckers — all of which are now extinct. Missouri’s rich lineage of outdoor columnists perhaps originate with Russell, who would detail his fishing and hunting trips and encounters with wildlife over a 15-year career writing for the Iron County Register.

Turnbo’s writings serve as a catalog of early Ozark culture and customs. Although Schoolcraft is arguably the most well-known among the four as a Missouri naturalist, Mark says readers may be surprised to learn his epic search for the region’s lead deposits with companion Levi Pettibone was rife with misadventure.

“They were so ill-prepared it was hilarious,” Mark says. “But I was floored by all this early natural history they recorded, and the hunting and fishing opportunities that were present in the Ozarks in the early 1800s.”

The bulk of “Ozark Outdoors” is given voice by living enthusiasts across 32 stories collected and edited by Mark and the students of one of his writing-intensive courses. The class received twice as many submissions but chose to focus on those that best conveyed the appeal of the outdoors. The stories relate not only the fish, deer and raccoon that didn’t get away, but also the life lessons learned, memories made outdoors and a reminder to share these experiences with younger generations.

“We were very careful not to steal the author’s thunder,” Mark says, “but I really wanted someone who is not part of the hunting and fishing crowd to pick this up and realize what they are missing.”

For those who venture outdoors there is always the chance, either implied or unexpected, at a brush with the unknown. As such, the book includes a handy and humorous encyclopedia covering mythical creatures of the Ozarks. The closing section covers everything from the “bingbuffer” — an inspired cross between the hippopotamus and the kangaroo that used its tail to throw rocks at prey — to the “wowzer,” a gargantuan mountain lion that reputedly attacked a wagon train in Oklahoma.

Cryptozoology might seem out of place in a collection of outdoor stories, at least initially. But Mark argues these stories are just as important as their true — or at least more realistic — counterparts. They’re part of the storytelling patchwork that makes up folklore and the tradition of sharing outdoor experiences, like a cousin to the classic fish story grown out of control.

“If you stay in the woods long enough, you’re going to see some things that don’t exist — and there’s no shame in that. It’s a great testament to people’s imagination,” Mark says with a laugh. “You hear or see something that captures your imagination, and the tendency is toward exaggeration. So what if it’s not true?”

Mark hopes the stories go beyond serving as a celebration of the region’s natural beauty and resources. He sees the collection of stories as a way to recruit or reactivate people — particularly kids — to the joys of the outdoors, even if their interests don’t include hunting or fishing.

“Being in nature resonates with people on a lot of different levels,” Mark says. “You can talk about the camaraderie, social bonding and adventure, but it’s your experience and your memories that make it powerful.”

Ozark Outdoors costs $15 including shipping and can be purchased online at www.confedmo.org. Contact Mark Morgan at markmorgan@missouri.edu or call 573-825-2705.