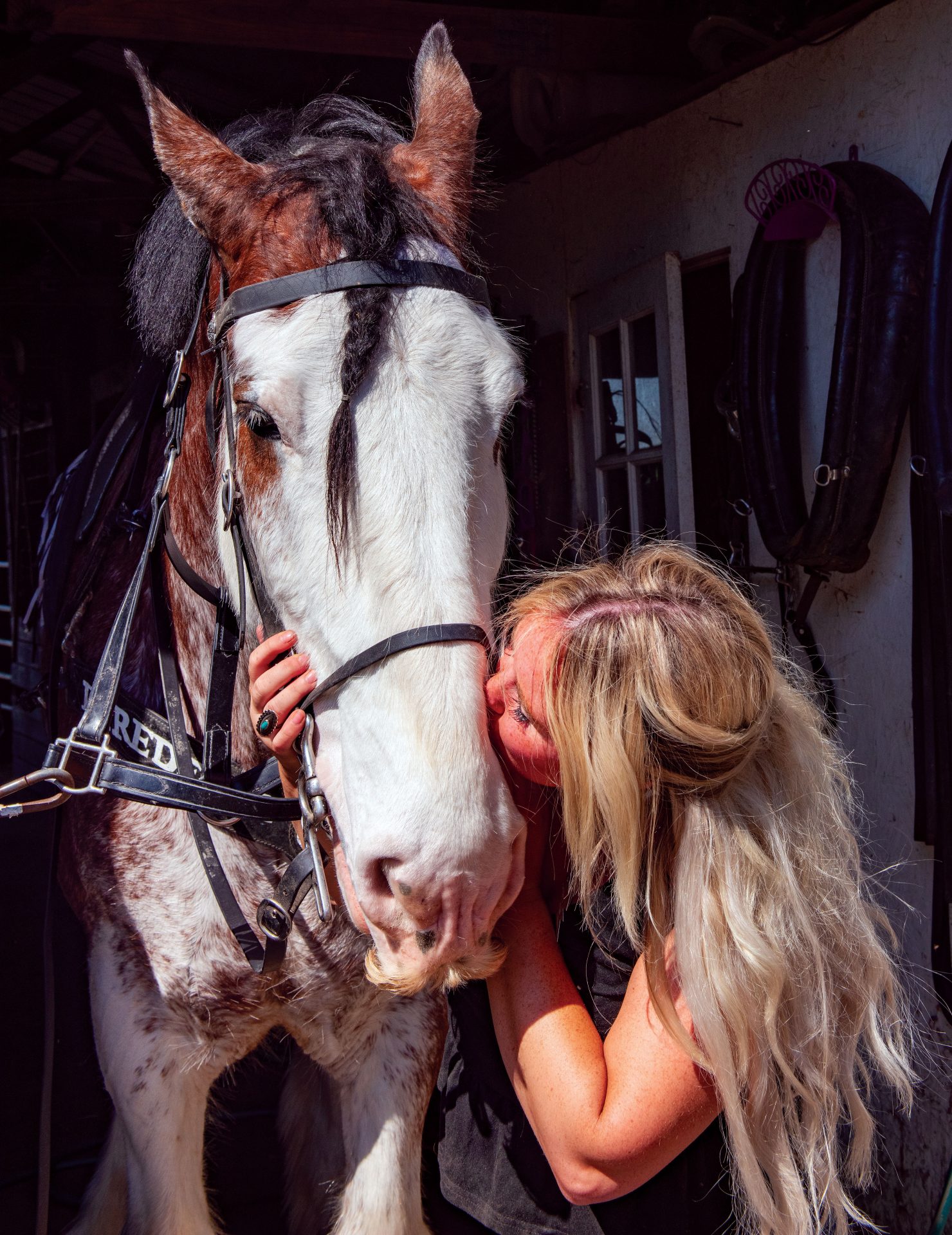 Michaela Redeker and her Clydesdales ride with style

They sound like muffled thunder as they round the bend. Dust clouds follow as their rider guides them with her reins. The Clydesdales continue galloping within inches of one another and in sync so the rider can stand solidly on their backs.

“Most people are unfamiliar with Roman riding because it’s pretty rare to see these days,” Michaela Redeker says of the style. Roman riding is where the person stands atop a pair of horses with one foot on each horse’s back as they ride, reminiscent of ancient Rome, minus the chariots and armor.

Michaela, the driving force behind Daredevil Drafts, says this style of riding is one she performs for crowds across the United States and Canada year-round. While many Roman-style riders use smaller breeds, this energetic 24-year-old horse trainer prefers her moving foundation to be more solid, so she chose Clydesdales.

“I’ve been showing horses all my life,” says the Catawissa resident. “My dad is a real-life cowboy and a farrier and my mother used to show horses, too. I knew what I wanted to do with horses when I was about 12 when I bought my first Clydesdale.”

The young Michaela saw a Canadian breeder was bringing a couple of Clydesdales to the Boone County Draft Horse and Mule Sale.

“I begged my mother to go to the auction while I was in school and buy one of them for me,” Michaela recalls. “I had $800 to spend. Mom kept saying, ‘No, no, no!’ But when I was headed home from school on the bus that day, she told me she’d bought one, adding she’d had to kick in another $200 for the purchase.”

That Clydesdale, a 4-year-old named Bluff, was Michaela’s first show horse, which she mainly used with carriage riding. But eventually the young rider told her mother the Clydesdale wasn’t as tall as she wanted. So Michaela sold the mare for $5,000 and bought a gelding to use with hitch (paired) carriage riding. Then she added a Clydesdale stallion to the mix.

“But he didn’t like traveling or showing,” says the young horsewoman, noting that’s when she sold him for one of her Clydesdales she owns today, named Jordy. The 4-year-old gelding, along with her other horse, 10-year-old Hef, are her Roman-style equine buddies. 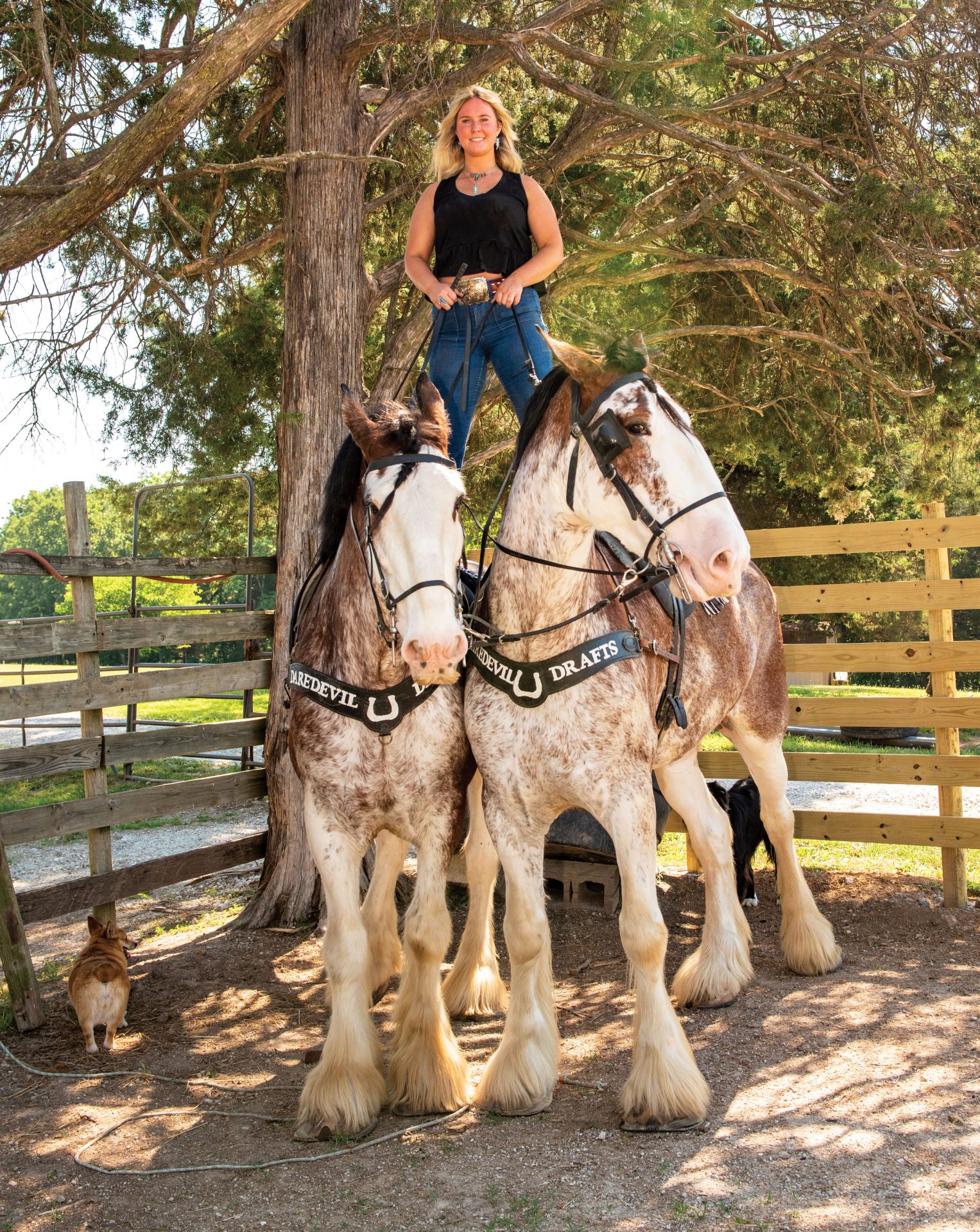 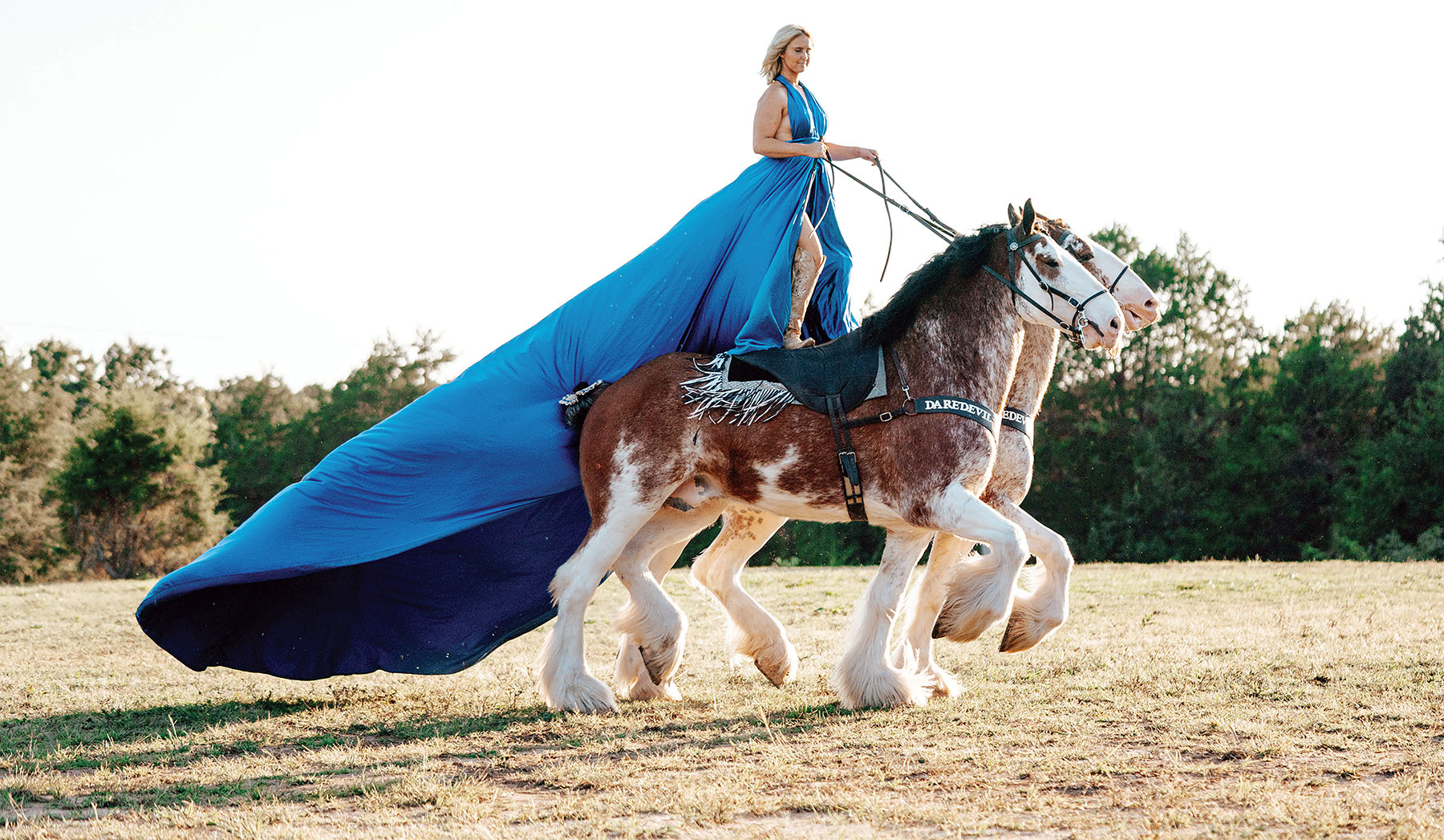 “They love to work and they’re happy when they know they’ve done what you asked of them,” says Michaela, kissing Hef on the nose as she puts his harness on. “That’s part of the Clydesdale breed traits — they aim to please and they have so much personality.”

“Then I thought, ‘Why couldn’t I just stand up on their backs and ride them at the same time?’ ” Michaela recalls.

“I didn’t let my parents know what I’d been doing until I got really good at it,” she says. “Then one day I made a video to show them. Mom was scared I’d get hurt. Dad just said, ‘That’s my daughter.’ That’s how Daredevil Drafts was born.”

As a backup plan, Michaela went on to East Central College after high school and graduated from welding school with thoughts of working in the oil fields of Texas. But her love of draft horses brought her home.

Michaela says her future goals include receiving an invite to the Rose Bowl parade in Pasadena. Until then, she keeps Hef and Jordy worked and ready to hit the road. “You’ve got to love these guys to spend every day working with them,” says Michaela, smoothing Jordy’s mane. “They give me so much more than I could ever give them.”