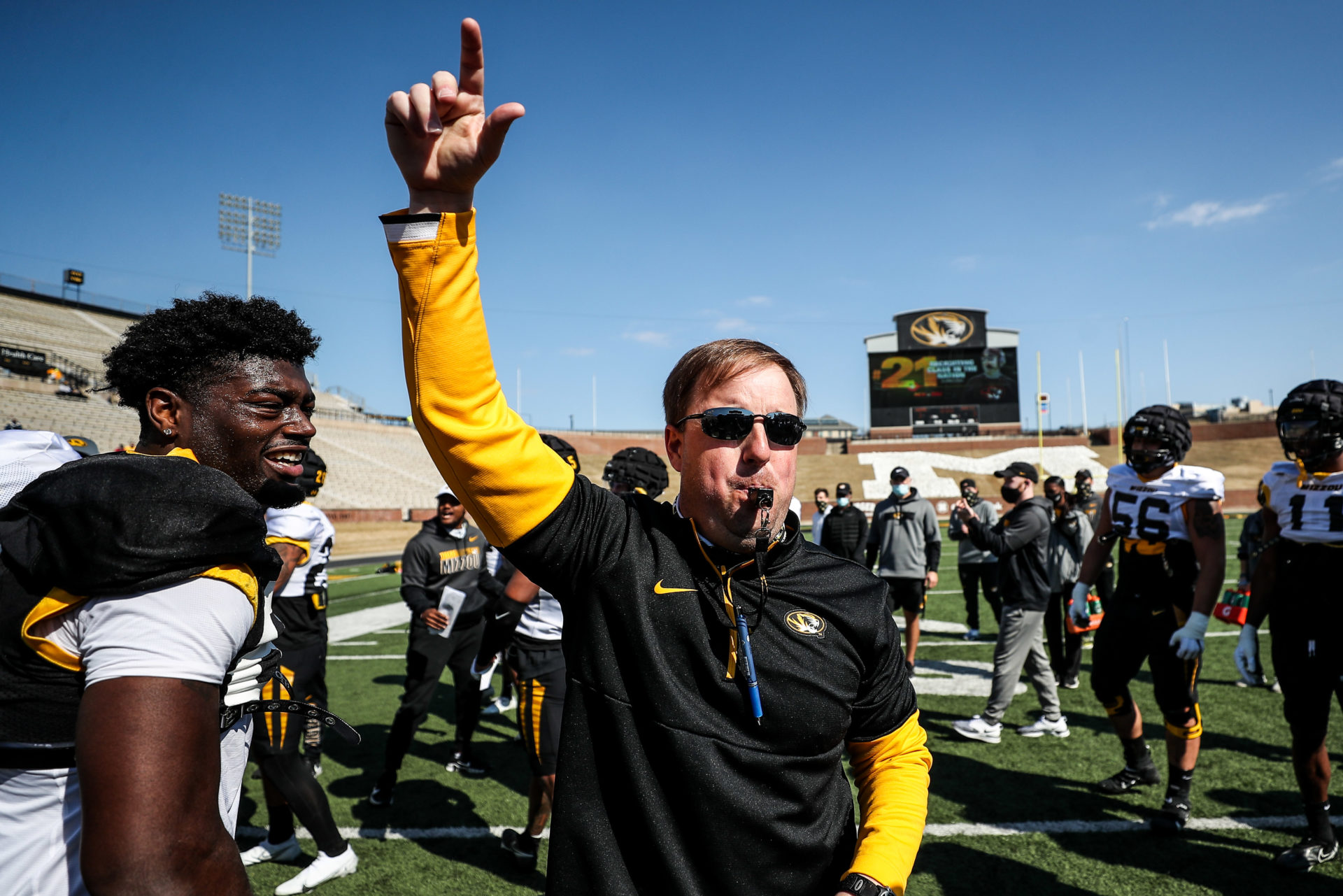 Mizzou’s Eli Drinkwitz is hungry for more wins in 2021

At the time the Mizzou football team notched its first win of the 2020 season, head coach Eli Drinkwitz probably thought he had seen it all. On March 16 he had to cut his team loose due to COVID-19 fears, without knowing when or if they would return. The entire season was on the brink of being cancelled. With no spring practice, there were players on the team the coach knew little about. And to top it all off, no one knew for sure who the starting quarterback would be if the season was able to be played.

As the dust settled and Mizzou faced a 10-game season against nothing but Southeastern Conference teams, the first-year coach could be excused for wondering what he had gotten himself into. His first opponent was Alabama, followed by a Tennessee team that always played the Tigers tough. Follow that with a planned away game against defending national champion LSU and it’s no wonder the pundits were questioning whether Mizzou would win a single game.

Saddled with two losses, Eli led his team onto Faurot Field after Hurricane Delta moved the contest with LSU to Columbia. What followed was an incredible 45-41 win clinched by a goal-line stand after safety Joshua Bledsoe swatted away LSU’s fourth-down pass.

That game made believers out of fans who may have had doubts about Mizzou’s choice for its 33rd head football coach. Sure, Eli had led his Appalachian State Mountaineers to a 12-1 record, a No. 20 College Football Playoff ranking and a Sun Belt Conference championship in 2019. But was he ready for the challenges of the powerful SEC?

Perhaps only his wife, Lindsey, and four daughters, believed he was.

If beating LSU wasn’t enough, as the season unfolded he would silence critics with a bevy of achievements:

“I think it achieved expectations,” the coach says of his debut season. “But we didn’t meet the standard. We don’t want to be a .500 ballclub, we want to win the SEC East. We want to contend to be SEC champions. We’ve got a lot of work ahead of us, but I think we were able to raise the standard of what Mizzou football is.”

While the LSU game will forever stand as a great moment in Mizzou sports, it’s not the most memorable game for their new coach. Eli points to the win against Arkansas as the 2020 Tigers’ greatest hit. 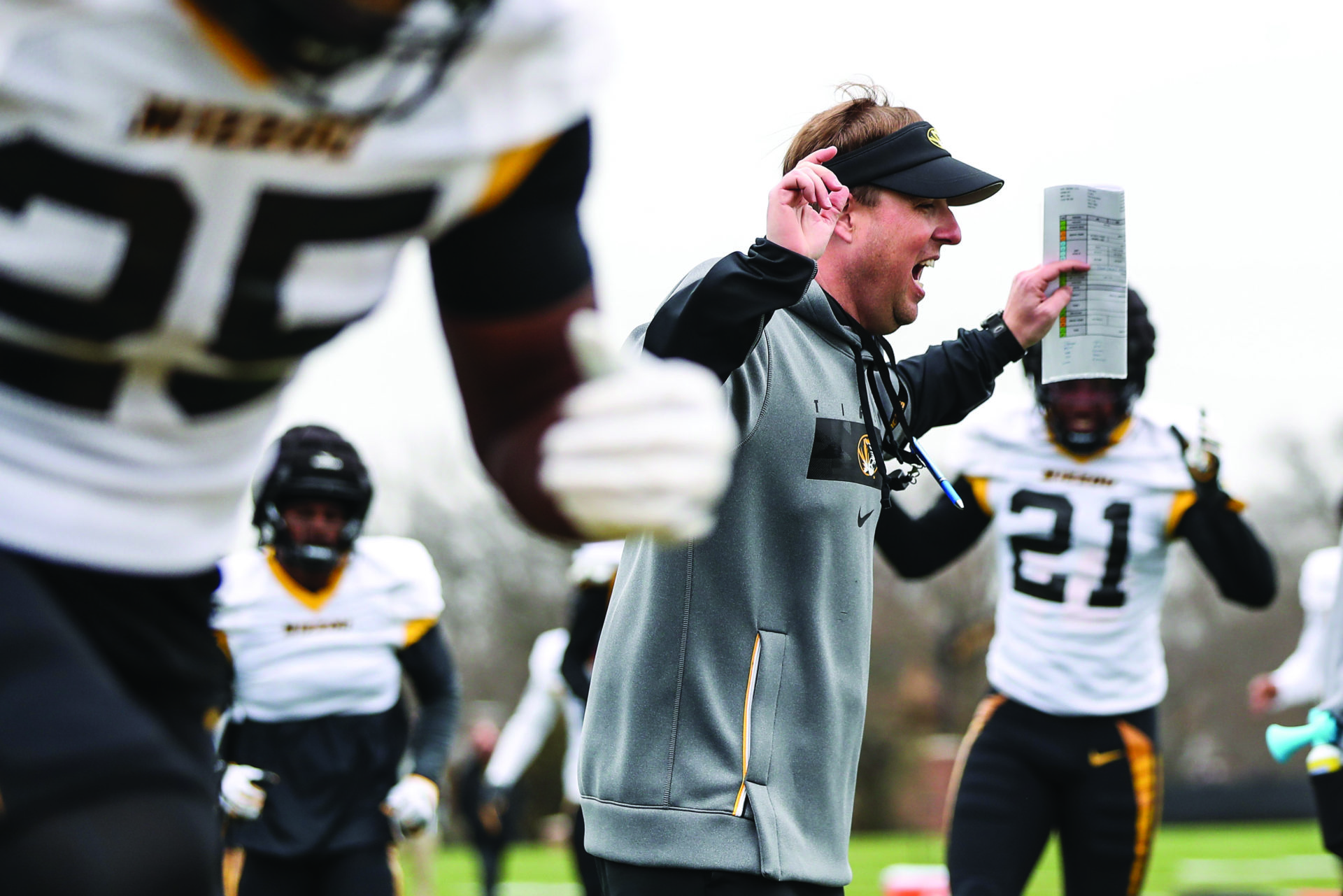 In that game Mizzou relinquished an early lead and trailed by 14 points in the second half. The Tigers staged a comeback and were leading 47-40 with just 4:47 left on the clock. But Arkansas appeared to put the game on ice with a touchdown and 2-point conversion that gave them a 1-point lead with 47 seconds left to play.

Here’s where “Coach Drink” proved he could lead his team to victory despite the circumstances. The Tigers worked the clock and moved the ball close enough to the end zone for Harrison Mevis to kick a game-winning field goal with no time left: Mizzou 50, Arkansas 48.

“The Arkansas game was an opportunity for our players to demonstrate mental toughness and commitment to team,” Eli says. “As a head coach that is one memory I will hold near and dear to my heart.”

That says a lot for a coach who was part of a national championship team while on the staff at Auburn. His coaching career began in 2005 at the high school level in his hometown of Alma, Arkansas and later at Springdale, Arkansas.

In 2010 he advanced to the college ranks as quality control assistant with Auburn. He would move to Arkansas State, then Boise State and North Carolina State, each time proving his worth as an offensive specialist. In five seasons as an offensive coordinator and head coach, Eli mentored five 1,000-yard rushers, four quarterbacks who would pass for 3,000 or more yards and four 1,000-yard receivers. His teams have won 103 games while losing just 39.

Not bad for a coach who never played college ball himself.

As he builds on the 5-5 record from last year, Eli sees the Tigers as “hungry dogs” rather than underdogs no matter who the opponent might be. “It’s not in my nature to consider myself an underdog,” he says. “But I do consider myself hungry to prove who I am and hungry to prove that we are not going to be outworked. And hungry for success. Hungry dogs wake up every morning and go find a way to eat. So, we are going to wake up every morning and find a way to win.”

While five Tigers left last year for the NFL, Eli will have 13 starters return, including quarterback Connor Bazelak who had an outstanding season in 2020 as a freshman. Mizzou’s new coach proved he is also a skillful recruiter, landing a Top 20 recruiting class in 2021 and improving to No. 14 for 2022, Mizzou’s best ranking ever. He’s also shut down the talent drain of top athletes leaving Missouri for other programs, signing five of the top 11 in-state prospects in 2021 and three 4-star prospects for 2022.

Despite his recruiting success, Eli says the key to turning the Tigers into a college football powerhouse rests in the stands. “We need everybody,” he says. “We’ve got to get everyone in Missouri pushing in the same direction. So, I need fans in the stands. Let’s make sure we have a great home-field advantage in the SEC. Home-field advantage ought to be worth 7 points in every game.”

Mizzou football 2021 kicks off Sept. 4 against the Central Michigan University Chippewas, and Rural Missouri readers can get special pricing for home games. For tickets, visit mutigers.com/ruralmissouricoop.