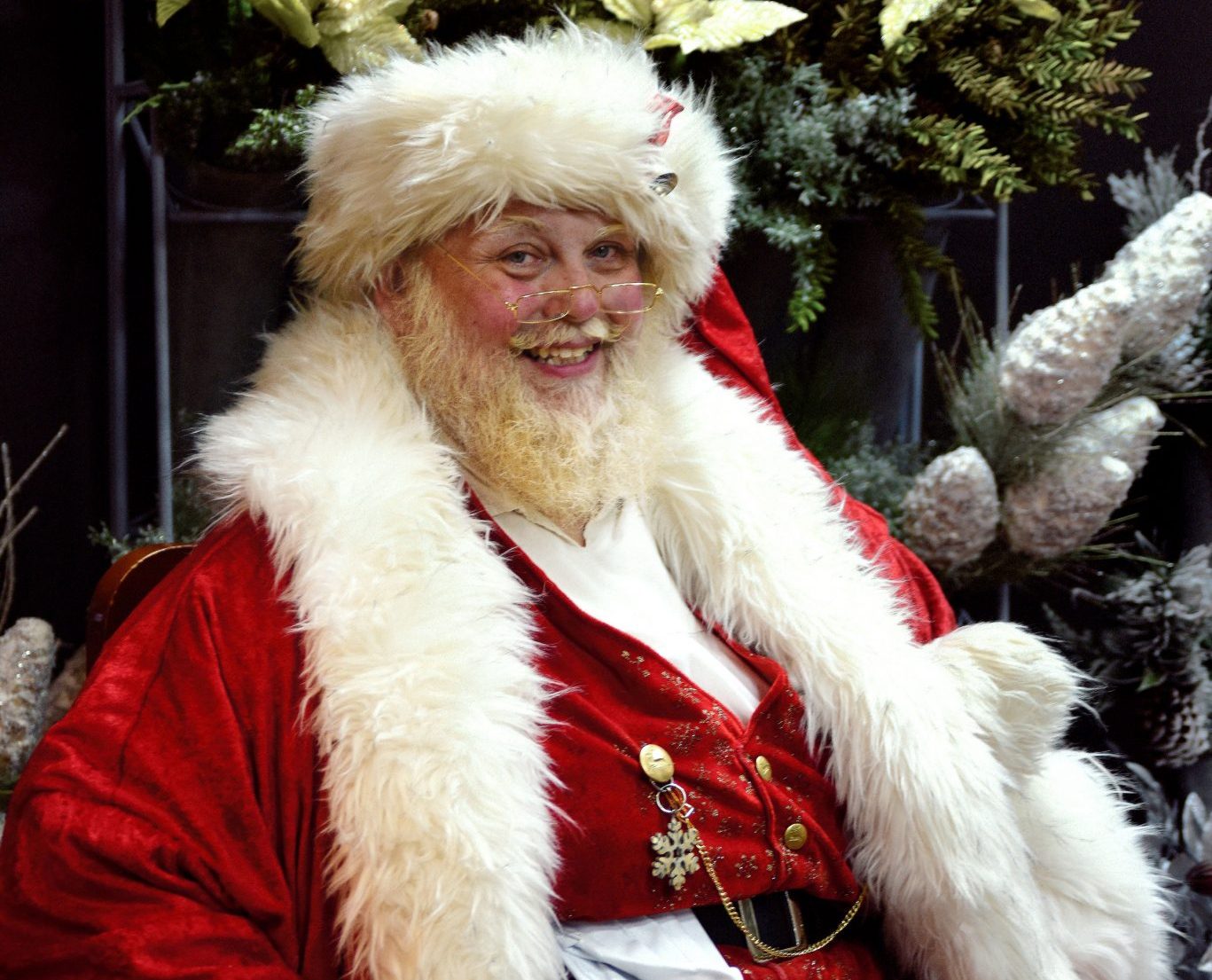 by Heather Berry I hberry@ruralmissouri.coop

He sets the gold-rimmed glasses on the bridge of his nose, then peers into the mirror to make any needed adjustments to his ensemble. The click of a door handle announces the arrival of his visitor.

“Come in! I’ll just be a minute,” says a rosy-cheeked Byron Pittman.

Wearing the well-known red velvet suit and fur-edged hat, he again checks the mirror, running a hand over his nearly white beard, then tucks a pair of white gloves into his belt. He quickly turns around and suddenly, it’s as if you’re transported back to a childhood Christmas where you’ve been waiting in line to visit the jolly old elf himself.

“Yeah, it’s fun watching the reactions of adults,” says the man who’s portrayed Santa Claus for the past 13 years. “It brings out the kid in them again.”

But representing the North Pole’s head honcho wasn’t something the 52 year old aspired to until a fateful night in 2003.

As a commercial printer, Byron and his wife, Dawn, decided they would personally deliver a big order placed by the popular Christian music group, MercyMe, which was performing in Springfield. “A 16-year-old boy lost control of his truck, came across two lanes of traffic and hit us head on,” recalls Byron. His wife was flown to Columbia with a collapsed lung and internal injuries. Byron had to be extricated from the crash.

“It would probably be easier to tell you what wasn’t broken,” says Byron. “Pretty much the engine ended up in my lap, crushing my pelvis and legs.”

Life quickly went from working 80-plus-hour weeks to a grinding halt for Byron, who spent weeks in the hospital, then more than a year in rehab just to be able to walk again. Over those months, anxiety and depression set in. Byron realized he wouldn’t be able to work the same as he had before, leaving what he felt was much of the burden of earning a living up to Dawn.

“I tried to go back to work several times, but it always seemed to fail,” Byron recalls. “I was in constant pain and I wanted it to end. So over time, I started to ‘get my ducks in a row’ as the saying goes and made my plan to end it all.”

The morning he’d planned to take his life was another day that changed his life.

“I put my feet over the edge of the bed and went into the first and only panic attack I’ve ever had,” says the soft-spoken man. “Thankfully, Dawn was home and when she realized what was happening, she rushed me to the hospital. I checked myself into the mental facility and started working through things.”

During a therapy session, Byron’s counselor asked him who was the happiest person he knew.

“I was being a bit of a jerk and off the top of my head said, ‘Santa Claus, because he’s always happy,’ ” Byron says. “The therapist told me to come back the next week and tell him why Santa was so happy.”

For the next week, Byron tried to come up with all sorts of answers, but always kept coming back to the same one: Santa Claus was happy because he was always spreading cheer to others by giving. Giving his time, a smile, an ear and gifts.

When he told his therapist “Because he always gives,” Byron recalls the doctor smiling. Then he pointed out the obvious to Byron — he’d been letting his beard grow quite a bit over the months and had added weight which might be an asset to a new career path. “I was like ‘I’ve got nothing to give,’ ” Byron says.

But the counselor’s words kept ringing in Byron’s head. He wondered if trying to bring joy to others would be helpful to his own situation. On a whim, he got on eBay and found a Santa Claus suit for $15. When his wife came home and heard of the plan, she was behind him all the way.

A buddy who worked for the City of Eldon, where Byron and Dawn lived at the time, asked Byron if he would be the Santa for the town’s Christmas parade — and he’s been Santa Byron ever since.

“It’s been a long journey that’s a work in progress,” says the kindhearted man. “But giving is the best thing I can do for others as well as myself. When you give with the right motive, you receive so much more in return.”

Byron quickly wore out the used suit and invited his Facebook friends to help buy a nice new suit via Kickstarter, an online service that helps people fund new ideas. “I was overwhelmed by the support.”

He invested in entertainment insurance and got a background check by the Highway Patrol so he could begin pursuing his work as Santa in earnest. Over the years he’s served as Santa Claus for businesses, parades, daycares and more. While those events bring Byron great joy, it’s often the quiet moments that offer as much happiness to this Santa.

“I’m all in,” Byron says, noting his Jeep’s license plate — B Santa — even promotes his job.

“When I’m not Santa you can usually find me making deliveries for Busch’s Florist in Jefferson City,” he says. Hospital or nursing home deliveries often sit at a front desk until someone can deliver them to rooms because volunteers are usually scarce. So he’ll do it himself.

He recalls one of his first times portraying Santa Claus at a community center. A child was hanging on to the rope barrier, rocking back and forth. When the rope came down, the child ran and jumped into Byron’s arms.

“Times like that are the reason I do this,” Byron says, tears making his blue eyes glisten. “I still fight with physical pain and depression, but I’ve got photos and letters from kids and adults telling me about the joy I’ve brought to them. And those are gifts to me that I’ll cherish forever.”

If you or a loved one is going through a difficult time, please call the National Suicide Prevention Lifeline at 800-273-8255 for free, confidential 24/7 support or go online to