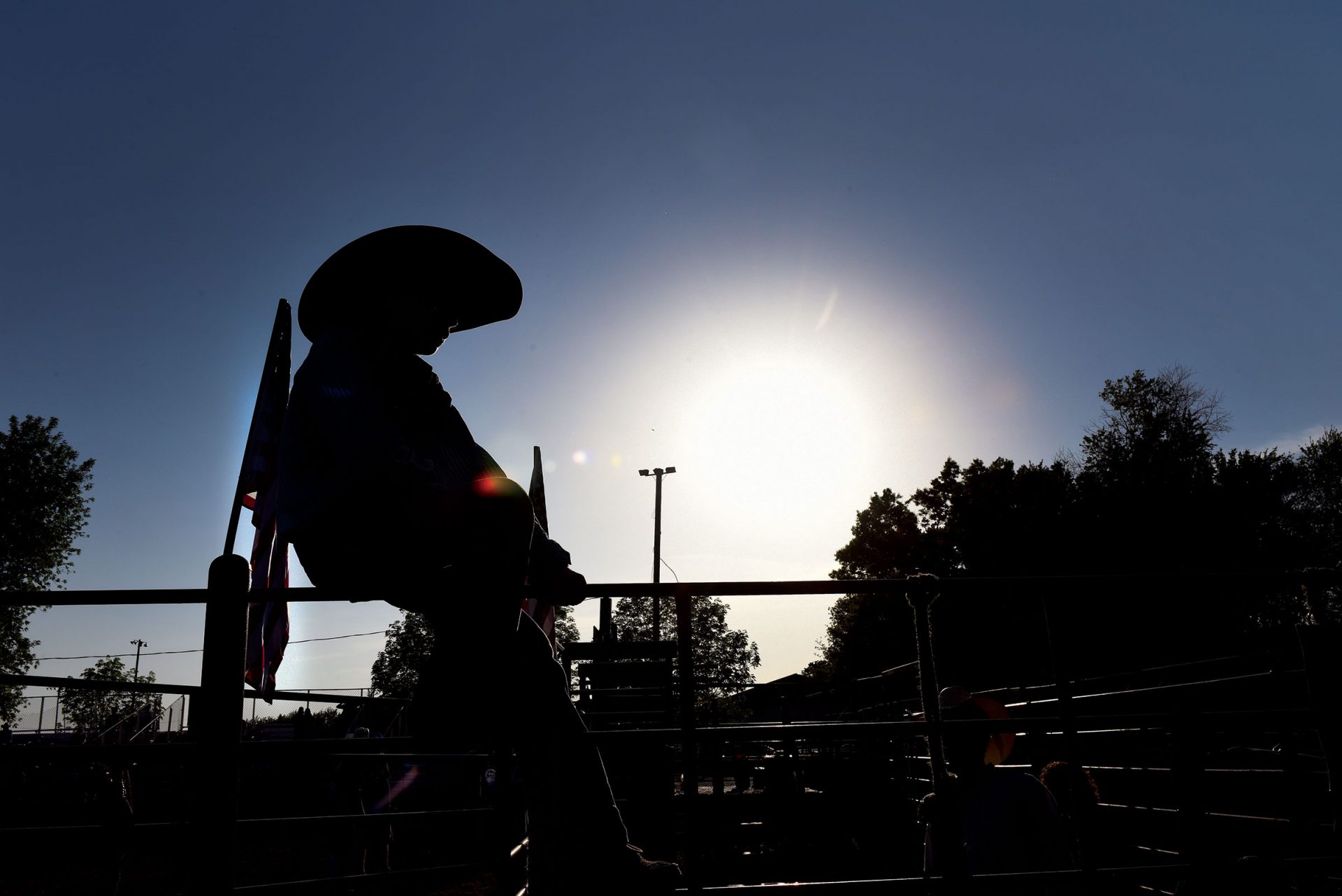 It’s a hot evening and a good crowd is gathered at the Windsor arena for some dirt-kicking action with the Amped Up Pro Bull Riding Tour.

When it’s his time to ride, 14-year-old Tucker Root climbs over the fence into the chute, ready to ease onto the back of a snorting mini bull. With safety gear on and leather-gloved hands, the rangy teen pulls the resin-coated rope tight on a bull known only as C11, and mentally prepares for the action about to take place. Tucker’s goal? To stay on the back of the bull for 8 jackhammering, muscle-tensing seconds before likely being tossed aside like a rag doll by the animal.

If you watch the freshman very long at a rodeo, he seems like any other farm kid until you hear him talk about his love of bull riding. You’ll also hear his insatiable desire to beat the bulls at their own game. The dozens of stone-encrusted silver buckle trophies Tucker has won over the past six years show his desire to learn something from every ride and apply it to the next snorting mini bull he meets in a rodeo arena.

So what are mini bulls? Well they aren’t baby bulls. They’re full-grown, bred-to-buck snorting beasts. These bulls just happen to weigh less than their full-size counterparts, coming in around 500 to 800 pounds where standard breed full-grown bulls average 1,800 to 2,000.

“My adrenaline is always pumping just like Tucker’s when he’s competing,” says his mom, Amber Segar. “I know there’s danger involved but there’s danger with any sport. I don’t let that worry me.”

Tucker adjusts his cowboy hat and nods in agreement. “I’m not scared at all. Honestly, the bulls just wanna get away from you. They don’t wanna hurt you.”

That said, Tucker has had a fair share of rides ending with cracked ribs, kicks and even a punctured lung. Amber says Tucker’s medical file is already inches thick at his young age.

“It’s all part of it. Once the adrenaline wears off, hopefully the ibuprofen is kickin’ in,” Tucker says, as if he’s been riding bulls for decades. Like most bull riders, the youth takes the gamble that he’s always going to walk out of the arena on his own two feet.

The 4-foot-9-inch, 75-pound youth has been participating in rodeo events nearly his entire life. Tucker began mutton busting (riding sheep) at the age of 3, and by 8 he moved up to mini bulls. What he currently lacks in physical size he has in tenacity for the sport. 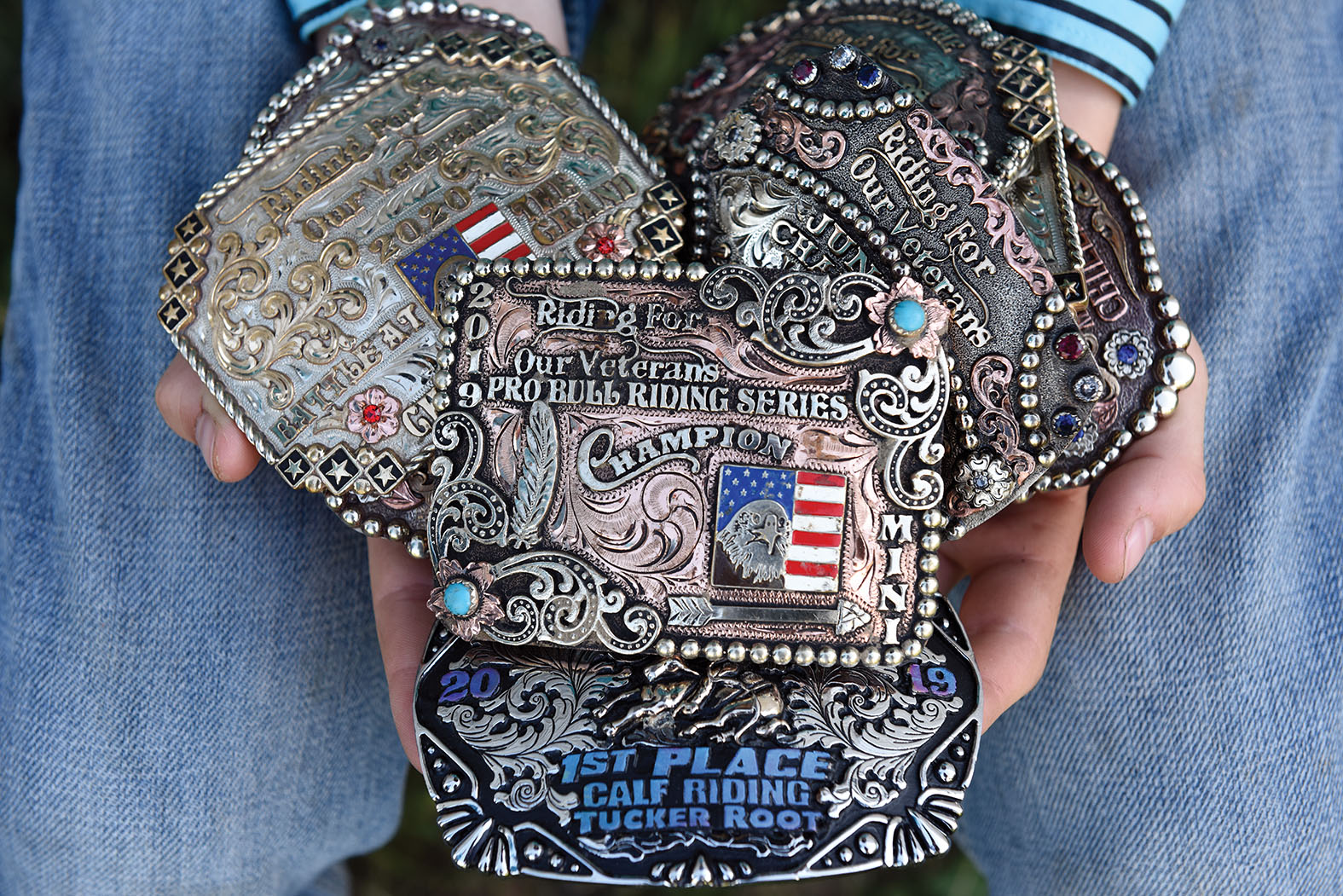 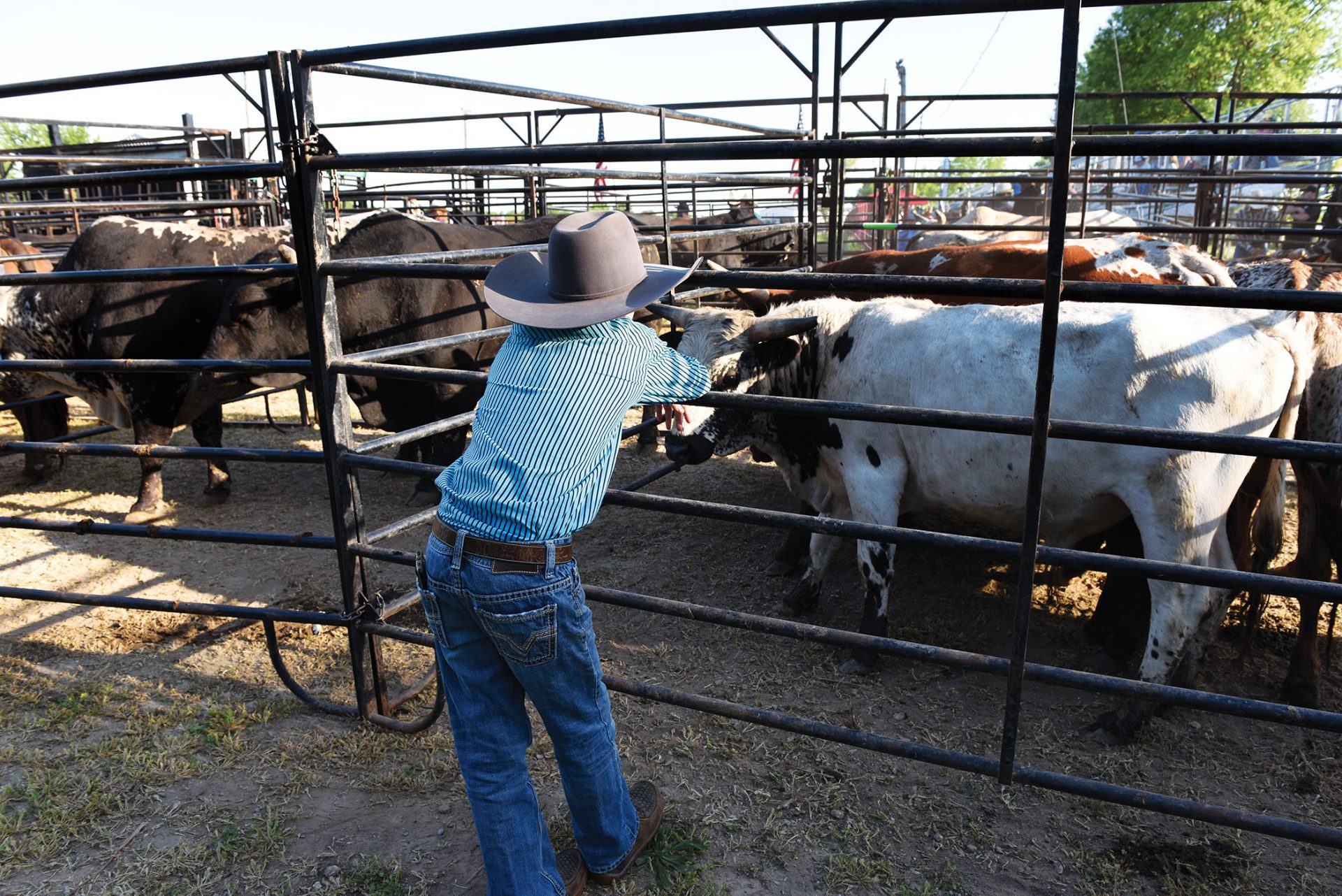 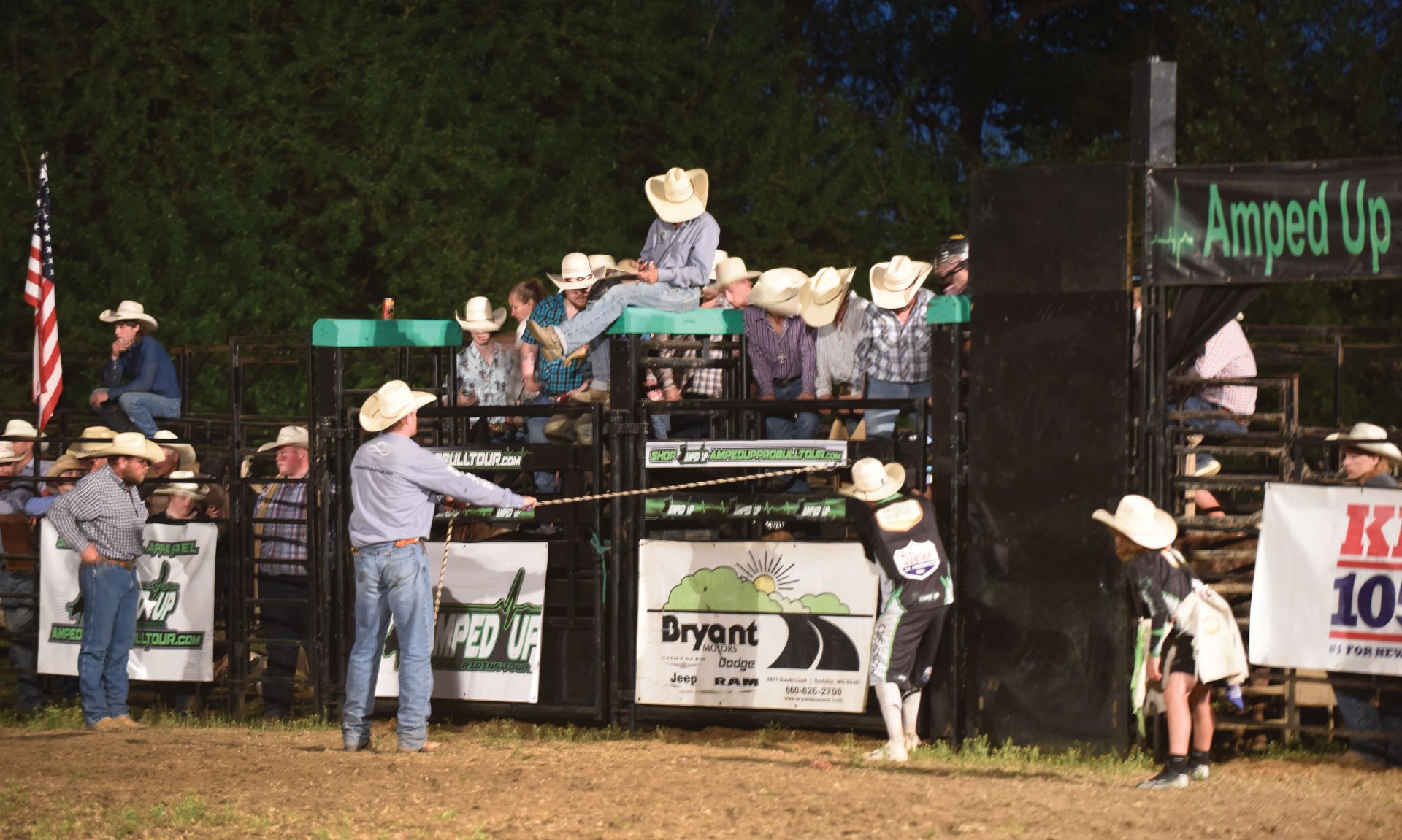 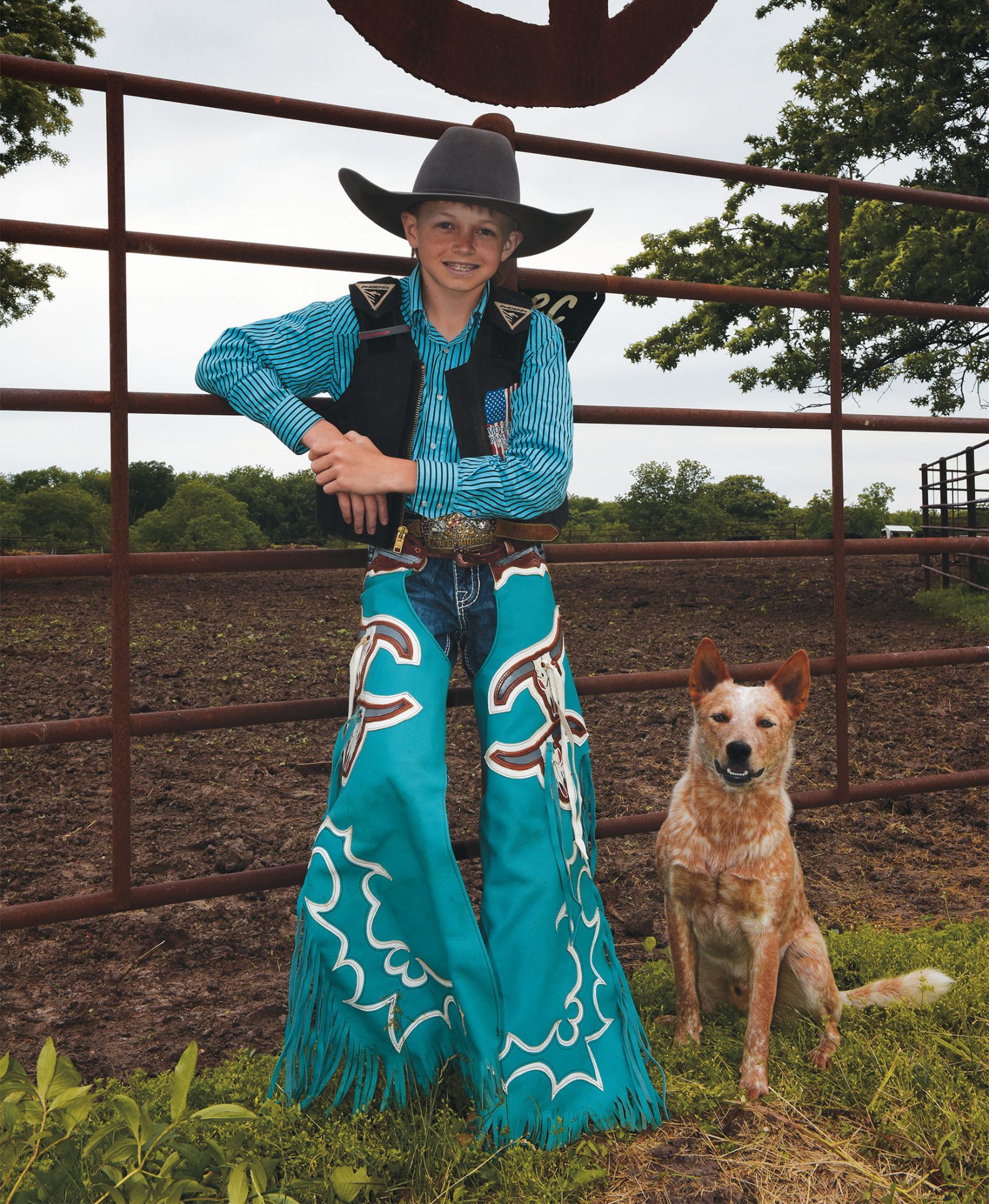 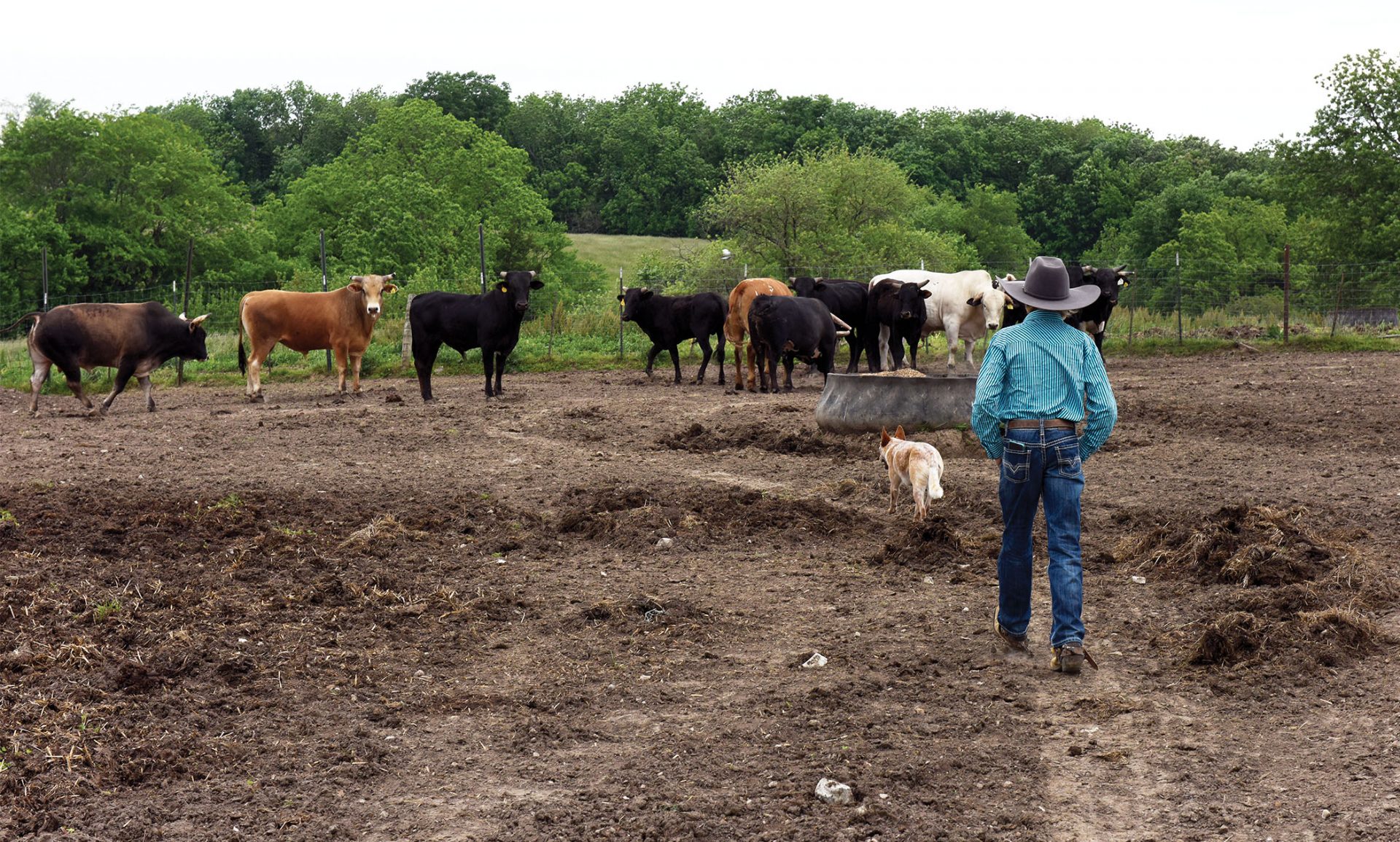 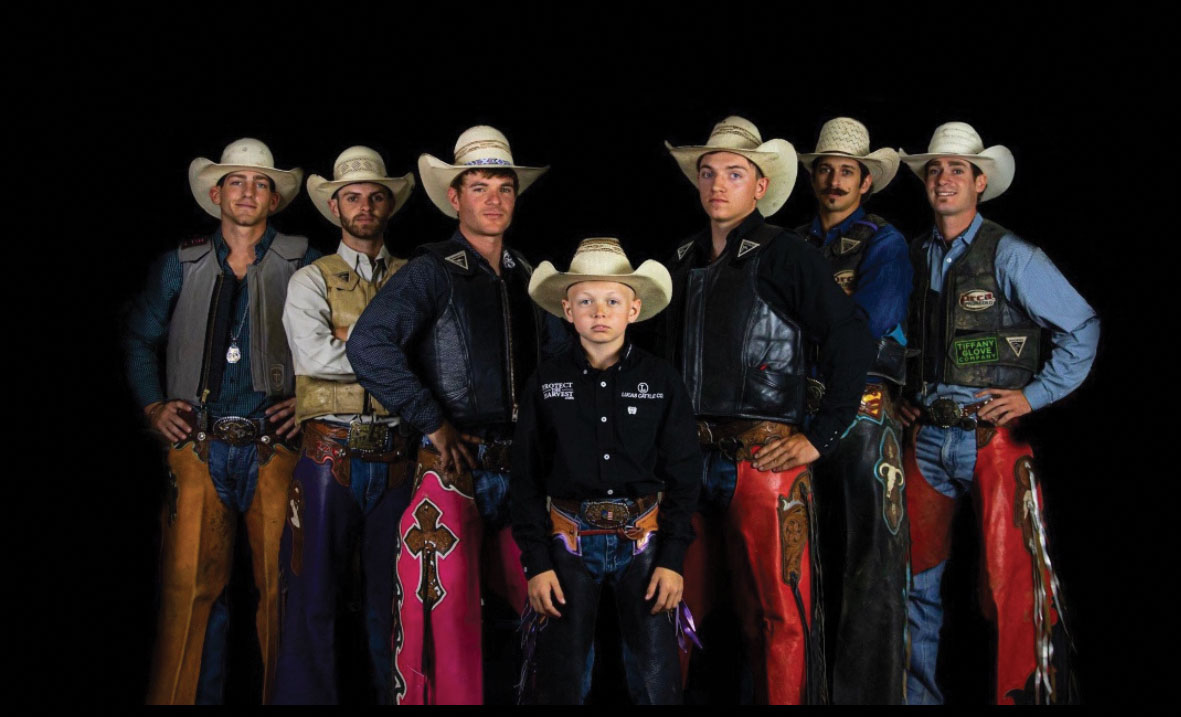 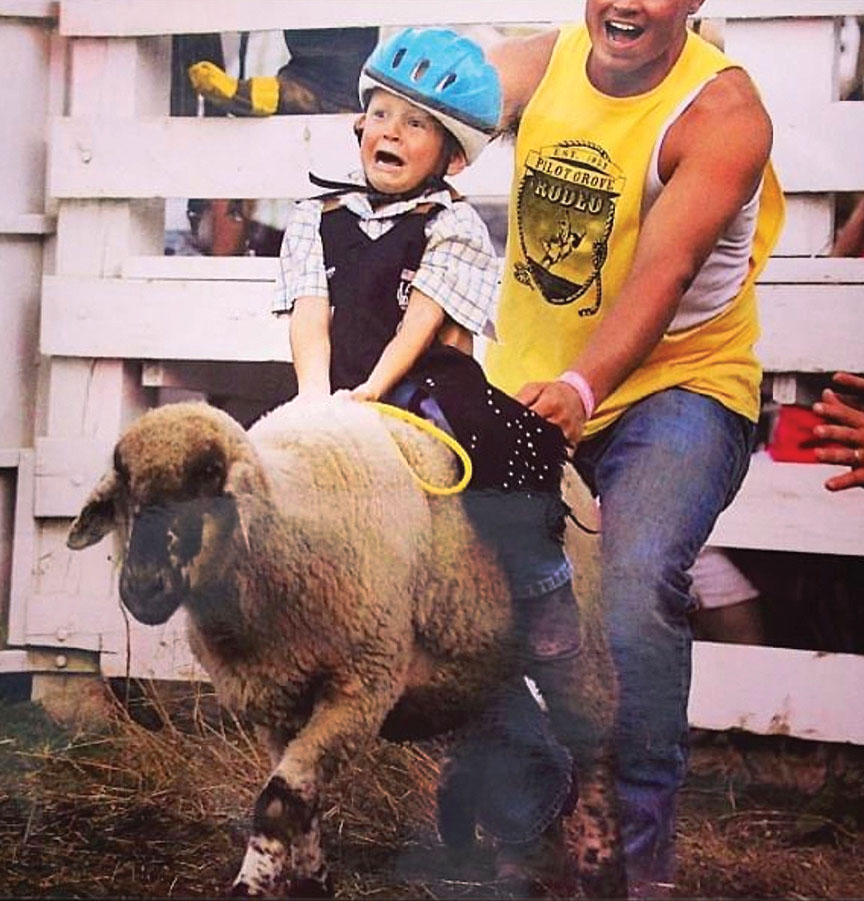 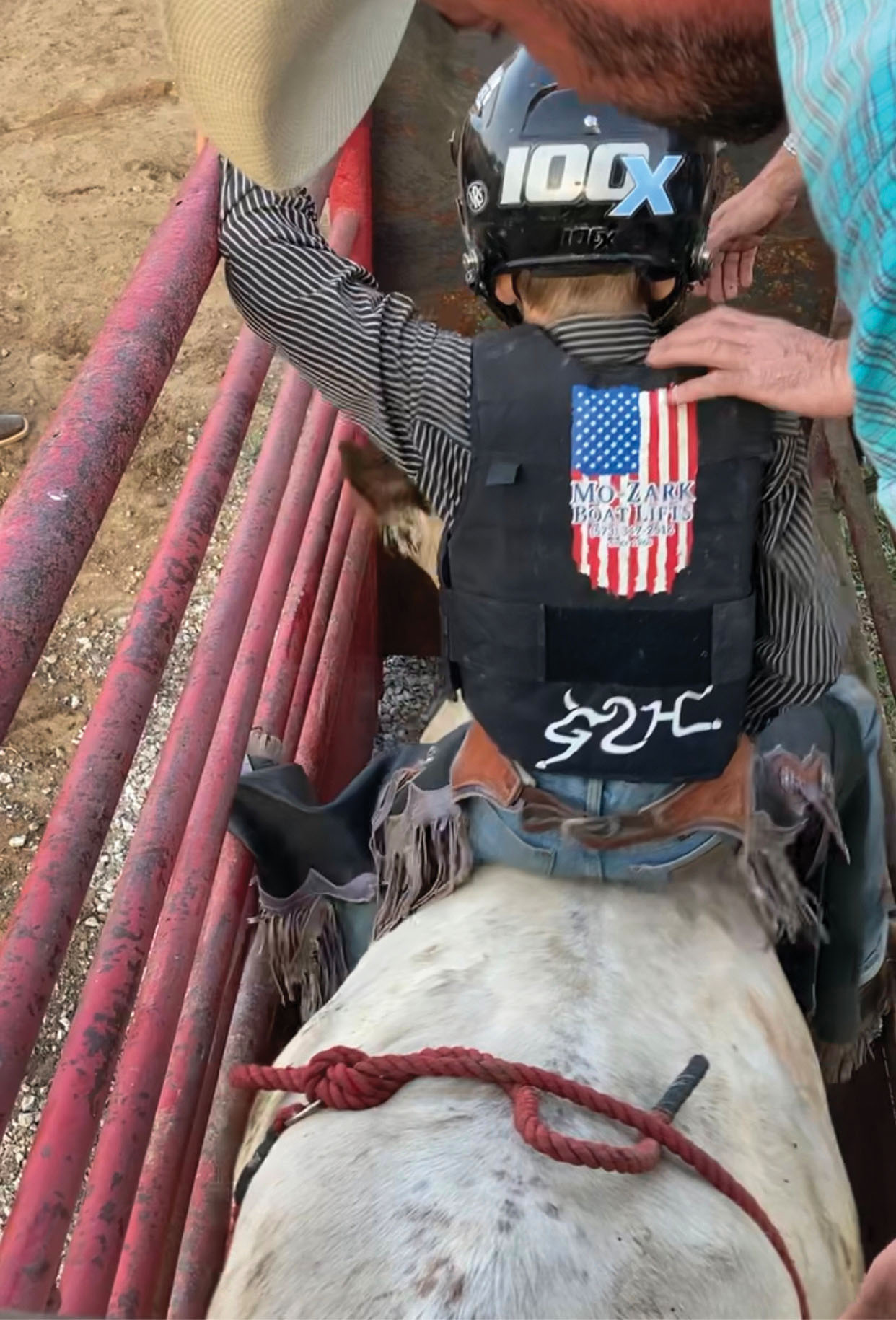 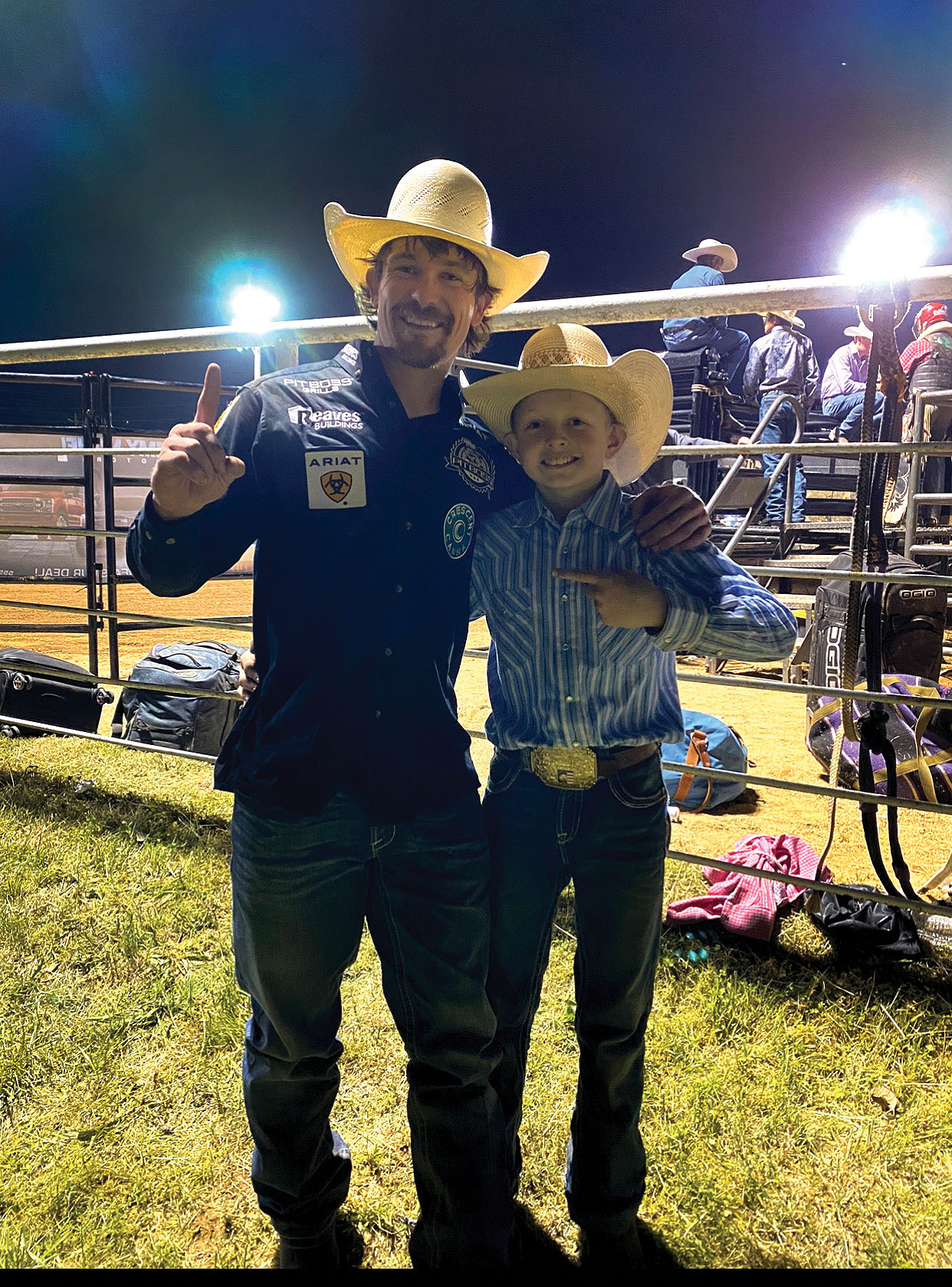 His brother and two sisters enjoy sports like dirt bike riding, barrel racing and car races, so adrenaline sports seem to run in the family.

While most bull riding events are held during summer, Tucker competes year-round through high school rodeos and professional level bull riding competitions across the Midwest. While he currently holds second place in the state for the Missouri High School Rodeo — Junior Division, this year is proving to be a bit tougher since COVID kept competitions at a minimum for the 2020 and 2021 seasons. There have been some wins and losses this year for Tucker, and more recently some emergency room visits to make sure no bones were broken. Things like that might scare some kids away from the dangerous sport. But not Tucker. He keeps practicing and mentally prepares to meet his next snorting foe.

Like many athletes, Tucker says he always watches any videos of his bull rides so he can improve his technique the next time he competes. “I always want to try to do better the next time,” says the young competitor.

For extra training, the next best thing to riding an actual bull is riding an air bull called a drop barrel which Tucker and his stepdad, Wes, rigged up on the farm. The teen says it helps him with balance, adding, “Standing on a basketball is good, too. It helps strengthen your core.”

Now that he’s 14, Tucker will age out of the mini bull category and move up to the junior bulls this fall. The new category will bring on new challenges — mainly a few extra hundred pounds of snorting, agitated bull — but Tucker says he’s eager and not afraid of moving on up.

“I’ve seen guys kicked across the arena, stomped on and kicked in the face to the point they’re spitting out teeth as they run to the fence,” Tucker says. “We all know it’s just part of the sport.”

The youth can often be found outside checking on mini bulls at the farm his dad, Jason, owns. “That’s Quarantine,” Tucker says, pointing to a horned bull in the lot. “He’s my favorite. He’s pretty tame and he’ll stay here all his life.” Other bulls in the herd have names like Mama’s Boy, Ratchet Rob and Joker.

As a young bull rider, Tucker is excited to have met some of the best riders on the circuit these days. He’s hung out with the likes of Chase Outlaw, Matt Triplett, Bob Mitchell and rookie Dalton Castle. He says most of them agree on one thing.

“They say things like, ‘Without you kids the rodeo wouldn’t be going on any more.’ They’re glad to see us participate,” says Tucker.

The bull rider says his dream is to get to the National Finals Rodeo in Las Vegas some day as well as earn a few world champion buckles. To do that, he’ll keep on working toward getting his Professional Bull Rider card at age 21.

“That opens up a lot doors,” says Tucker. “You just keep trying for the win and eventually, as you work your way up, then compete with the best of the best in the sport. The top 35 riders go to the world finals. That’s something I want to do.”

Isaiah Dunn, owner of the Warrensburg-based Amped Up Pro Bull Riding Tour, says Tucker is one to watch.

“Tucker is one of those kids who puts his heart and soul into every ride,” Isaiah says. “He wants to learn from every single experience. If he’ll keep putting in the time and effort, that drive is going to put him at the top of the game one day.”

As the sun begins to set on the horizon, the bull riders line up for their turn, anxious to compete. Jason goes with Tucker to each competition and is the one who ties his son down to every bull. The gate is about to open for what he hopes will be a solid, 8-second-long bull ride.

He sits squarely on the back of the bull, one hand raised high in the air. No matter the outcome, Tucker is sure to ride again.

“If the bull tosses me, at least I hit the ground trying,” he says.