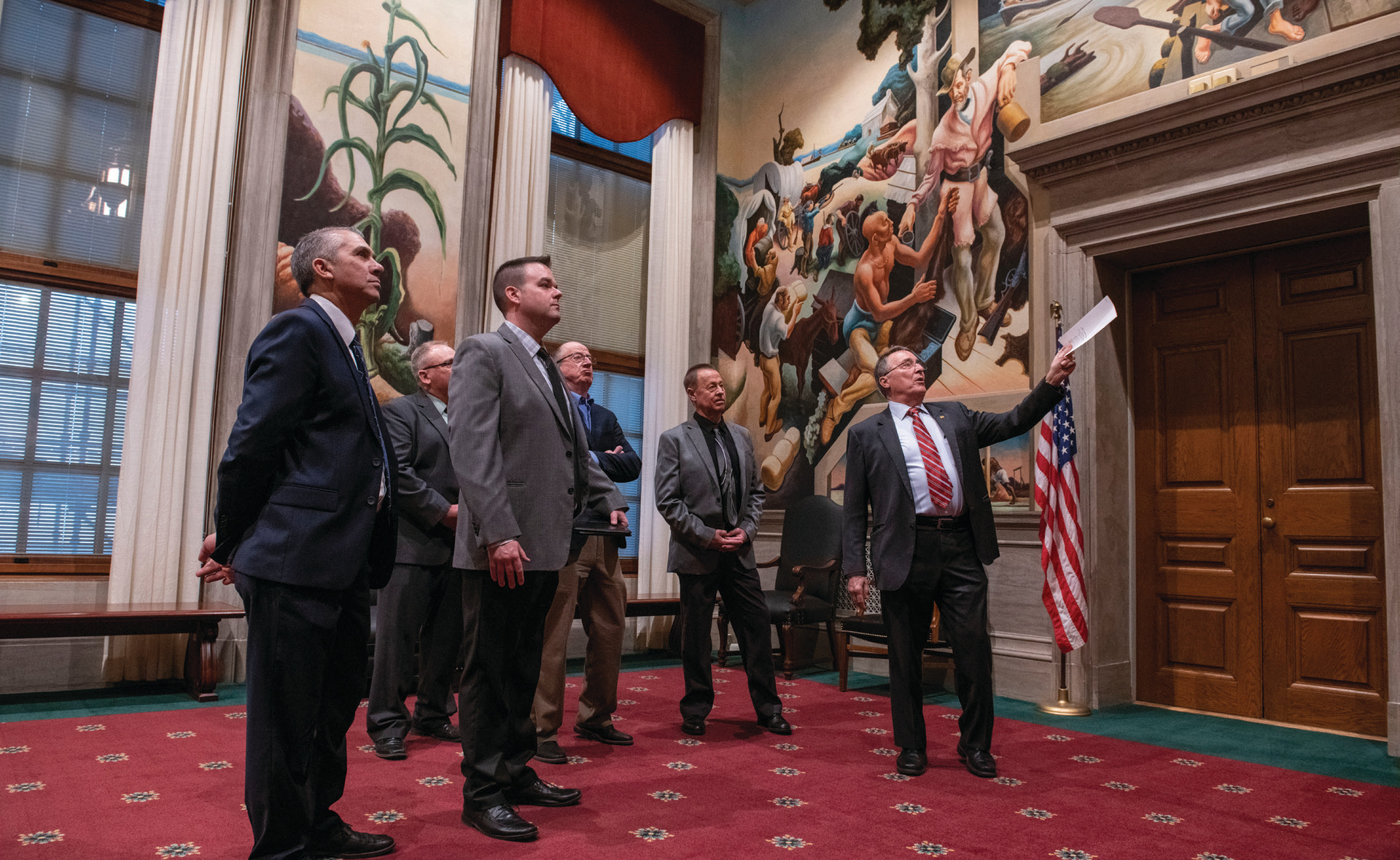 No trip to the Missouri State Capitol is complete without a visit to the Thomas Hart Benton mural located in the House Lounge on the third floor. The painted walls executed by Benton 82 years ago are still surprisingly bright and vivid. Benton’s artistic wizardry pops out with dramatic 3D-like effects. Powerfully built figures seem to walk off the walls. Almost magical shifts of perspective draw the viewers’ attention across the scenes of Missouri history that span the length of a painting 16 feet high and 100 feet long, wrapping around two corners and three doors.

At one end of this extraordinary work of art is the beginning of Missouri’s development. The 50-foot-long middle section presents a Missouri of small farms and towns. The old-time scenes of a picnic and political gathering (Benton’s father was the model for the speaker), the courtroom scene (his brother is addressing the jury) and the nostalgic farm and home settings were all drawn from Benton’s boyhood memories growing up in southwest Missouri accompanying his father on the political circuit. The remaining wall depicts life in St. Louis and Kansas City with industrial workers and political meetings.

Like Mark Twain, Benton was an authentic Missouri-born genius. His mural is an enduringly popular attraction in the Capitol building. It is impossible to imagine the total number of visitors who have witnessed this extraordinary mural over the past eight decades.

The opportunity to paint the Missouri State Capitol mural came at a significant crossroad in Benton’s artistic career. By then he had gained a blossoming national reputation as a muralist. Time magazine featured Benton on the cover of the Dec. 24, 1934, issue. The story within described Benton as the “most virile of U.S. painters of the U.S. Scene.” Benton, along with Grant Wood and John Steuart Curry, had emerged as leaders of a new regionalist movement that was coming to dominate the American art scene.

Benton was born in 1889 in Neosho, Missouri, where his father was a prominent lawyer and four-term congressman. The younger Thomas bucked family tradition to pursue art. With his mother’s aid, he studied art in Chicago, Paris and then New York, which became his home and studio. The many painting skills he acquired during these stopovers were supplemented by a stint in the Navy during World War I. His duties required him to make drawings of the naval installations where he was stationed, an experience that set him on the course he would ultimately follow. He rediscovered his childhood love of drawing realistic objects.

He turned his back on the modern abstract art movement. From then on, America and its people would be the wellspring of his artistic inspiration. For years, he journeyed along countless back roads all over the nation drawing everything he experienced. Volume upon volume of sketch books filled up with thousands of images of the people and places he saw.

As Benton gained new-found fame and prosperity as an artist, he grew increasingly disenchanted with the New York and Paris art establishments. He felt a growing desire to return to the Midwest, if only he could make a living there. At this fortuitous juncture, two extraordinary opportunities came his way from his home state.

First, thanks to family political connections in southwest Missouri plus a few rounds of bourbon whiskey, local politicians came to the conclusion that it would be a good idea to have the now famous native son paint a mural in the state Capitol. Somehow they managed to wrangle a bill through the state general assembly to hire Benton to execute the mural at the princely sum of $16,000, more than the governor was paid. It was Benton’s most lucrative commission yet. He began the project in 1935 and completed it in 1936.

At the same time he received the mural commission, an offer came from the Kansas City Art Institute to join the faculty as head of the painting department. This sealed his determination to move back to his home state of Missouri and set up permanent roots in the heartland of America. Kansas City became his home until his death in 1975. 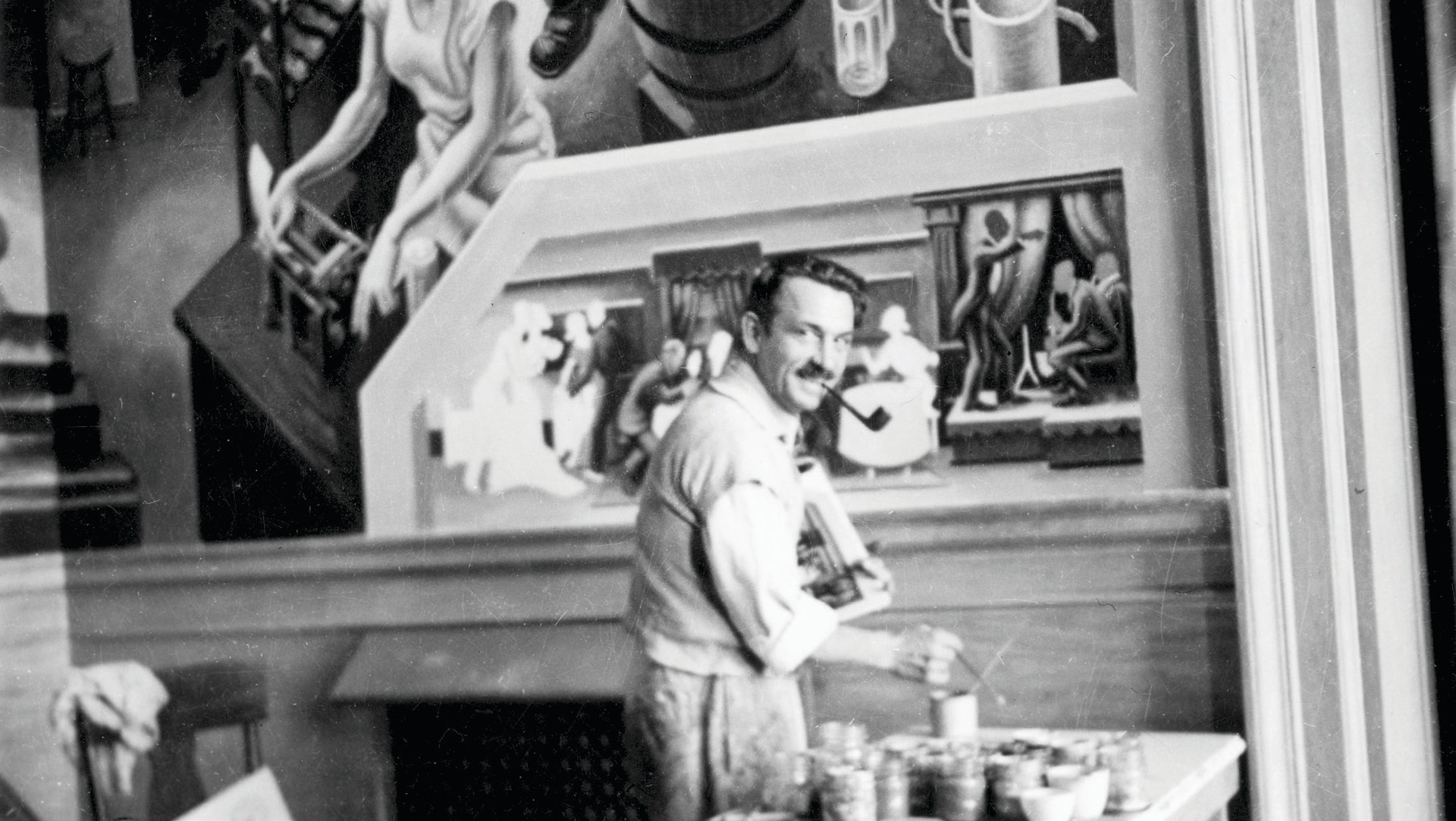 Benton hard at work on the mural in the state Capitol in 1936.

At the time he took on the challenge of the Missouri mural project, Benton considered himself to be at the height of his artistic powers. The commission to create a major mural in Missouri gave him the perfect opportunity to create his masterpiece and to work with themes that were shaped not only by what he could glean from books and field trips but also from childhood memories and local lore.

On the walls of the House Lounge, he was provided a wonderful space for the sweeping saga of Missouri history he had in mind. The House Lounge is a large, high-ceilinged room, 50 feet long and 25 feet wide, with doors centered on the three inside walls and a row of three windows on the outside wall.

Benton proposed to create in his mural a “Social History of Missouri.” If Missouri’s politicians and art commissioners had hoped to see noble leaders and heroic deeds paraded across the walls they commissioned, they were out of luck. Precious few noble leaders figure into the creation of Benton’s mural. For him, it was ordinary men and women, hard at work at a thousand tasks, who built Missouri.

None of Benton’s characters have time to strike noble poses; they are usually absorbed in some labor, helping in a modest but significant way to create the Missouri he loved. Real Missourians from all walks of life posed for the 200-plus persons portrayed in the epic painting. Benton did, however, journey to Oklahoma in order to sketch a genuine Osage Indian.

Benton’s social history did not spare Missourians reminders of the unpleasant and shameful aspects of their state’s history. On the walls of the mural, slaves are being whipped and auctioned off; a trader plies an Osage Indian with whiskey; Mormons are tarred and feathered; a settler is lynched by Civil War guerrillas while his family is turned out of their burning home; a bank and a train are being robbed by Jesse James and his gang. Johnny is in the process of being murdered by Frankie, and Huck Finn and runaway slave, Jim, are shown on a raft escaping down the Mississippi River on a moonlit night. The bare bottomed baby raised some eyebrows. The corrupt political boss of Kansas City in the 1920s and ’30s, Tom Pendergast, figures prominently on one wall.

But in recent decades, Benton’s powerful mural of Missouri history has stirred up emotions of awe and admiration more than controversy. Of his stuning artistic achievement, Benton said, “I believe the Missouri mural completed the last phase of my development as an artist.”

For a year or so after the Missouri mural was unveiled in 1936, plenty of controversy was whipped up over these negative aspects of Benton’s social history. But in recent decades, Benton’s powerful mural of Missouri history has stirred up emotions of awe and admiration more than controversy. Of his stunning artistic achievement, Benton said, “I believe the Missouri mural completed the last phase of my development as an artist.”

Today, Benton’s mural appears to be in excellent condition, although qualified conservators continuously evaluate the condition of this priceless work of art. Beginning in the 1960s, the mural has been repeatedly cleaned and repaired. Decades of smoke and grime have been carefully removed and a coating applied to preserve and protect the artwork. It is happily now possible to view the mural in the full glory that Benton intended for his powerful depiction of Missouri history.

For more information on Thomas Hart Benton, visit the State Historical Society of Missouri at https://bit.ly/2ZkcGGH.