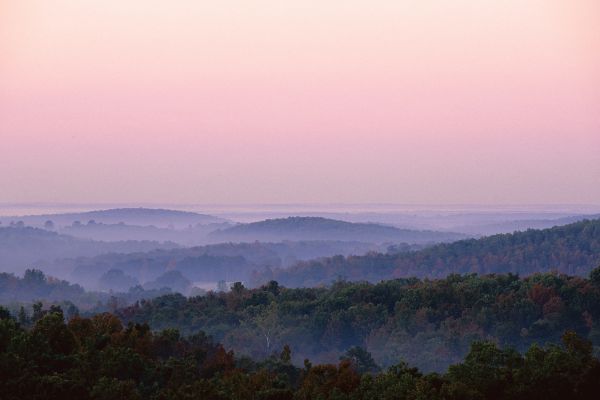 Deep in the Ozark Hills, Father Hogan built a community near what is now the Irish Wilderness. His vision failed due to the Civil War, but it remains a place of solitude and mystery waiting to be experienced.

Solitude awaits where immigrants once dreamed of a new life

In 1859 the Rev. John Hogan, a Catholic priest from Limerick, Ireland, traveled to the area between the Current and Eleven Point rivers searching for a place to establish a settlement for Irish-Catholic immigrants. He was one of the fi rst to recognize the plight of his fellow countrymen and women.

While the men built the railroads that were coming into Missouri, the women took the only labor they could fi nd, working as servants in the city homes of the wealthy. They dreamed of a place where they could own the land, marry and live without the oppression that came from persistent poverty.

Rev. Hogan, traveling with a horse named John the Baptist, fi rst sought to build his settlement in northern Missouri which was more suited to farming. But the fertile soil here proved too expensive for his meager bankroll. Instead he boarded trains and wagons south where he found large tracts of untamed government land available at 12 cents per acre.

The priest wrote in his memoirs, “Nowhere could the human soul so profoundly worship as in the depths of that leafy forest, beneath the swaying branches of the lofty oaks and pines, where solitude and the heart of man united in praise and wonder of the Great Creator.”

Here he established a thriving community that came to be known as the Irish Wilderness. But his timing was poor. The region was soon engulfed in guerrilla warfare from the Civil War. Caught in the middle, the settlement mysteriously disappeared, leaving behind only the land and the name now attached to Missouri’s largest wilderness area.

The area was designated a wilderness by Congress in 1984. It now consists of 16,427 acres.

The Irish Wilderness can be accessed by taking State Route J south from Highway 60 or north from Highway 160 to the Camp Five Trailhead. Look for the Forest Service Wilderness sign and a quarter mile gravel road leading to the parking area. There’s a small pond here, but not much else in keeping with the wilderness designation.

A hike down the 18.6 miles of White’s Creek Trail on St. Patrick’s Day tops any city parade with its hundreds of obnoxious revelers. It doesn’t take long for visitors to leave civilization behind as the path descends into the heavily timbered wilds.

The trail forms a loop that leads you past sinkholes, near springs, under copses of native shortleaf pine and alongside streams that disappear underground, perhaps as the Irish did. Another highlight of the area is White’s Creek Cave, a large cave located 13 miles from the Camp Five Trailhead.

The Eleven Point River, itself a Wild and Scenic River, forms the western boundary of the wilderness and is often a destination for hikers. An abandoned homestead still can be found a short distance from the river.

Camping is permitted anywhere in the Irish Wilderness, though it’s best to pitch your tent away from the trail to maintain the solitude for others passing by. Water can be filtered from Bliss or Fiddler springs, which run clear and cold, but there is no potable water.

Enjoy your time in the Irish or any of the other Missouri wilderness areas, but remember to obey all regulations and to follow the wilderness manners shown below. There’s nothing like immersing yourself in wilderness to shake off cabin fever from a long, hard winter.

Learn more about the history of the area by purchasing a copy of “Mystery of the Irish Wilderness,” available at www. beautifulozarks.com mystery-of-the-irish-wilderness.You can download a map of the trail from www.ouachitamaps.com, or order a waterproof set for $5 plus shipping by emailing cew5151@gmail.com.

With spring fast approaching and Mother Nature reawakening, now is a great time to visit these other Missouri Wilderness Areas. You can fi nd directions and more information at www.wilderness.net.

Rock Pile Mountain
The state’s smallest wilderness, Rock Pile Mountain is a broken rocky ridge in the St. Francois Mountains that is named for an ancient pile of stones piled by an unknown person. Its 4,236 acres include the namesake mountain, steep limestone bluffs, curious rock formations and caves. A bonus is the many shut-ins formed by igneous rocks that defy erosion.

Devils Backbone There are 13 miles of trails running down a long, narrow ridge forming the “backbone” of this 6,691-acre area. The trail leads alongside fl owering dogwood and redbud to three springs, including Blue Spring which puts out 7 million gallons of water per day.

Hercules-Glades Highlights of this 12,423-acre area include grassland, limestone outcrops, narrow creeks and glades. The area is home to many species of fauna not seen elsewhere, including tarantulas and road runners. It also includes 31 miles of horseback and foot trails.

Paddy Creek Named for logger Sylvester Paddy, this area offers access to Big and Little Paddy creeks and the Big Piney River. Its 7,040 acres are heavily timbered and pockmarked with caves and rock formations. The Big Piney Trail loops for 17 miles through the wilderness.

Piney Creek Left to nature when the last residents left in the 1950s, Piney Creek features large stands of shortleaf pine atop hilltops rising 400 feet or more above the hollows. There are 13.1 miles of trail leading around the drainage area of Piney Creek. Western pygmy rattlesnakes frequent the area.

Mingo The last large tract of swamp in Missouri forms Mingo National Wildlife Refuge, which includes a 7,730-acre wilderness. Its cypress trees serve as homes for bald eagles and other birds, while its dark waters teem with fi sh. Expect to see lots of snakes.

Bell Mountain Bell Mountain, which peaks at 1,702 feet, and Shut-In Creek form the centerpieces of this 9,183-acre wilderness. Hikers use the Ozark Trail to reach the area and connect with the Bell Mountain Trail. Another trail climbs Lindsey Mountain.

AWilderness Area is often described as a “place where man himself is a visitor who does not remain.” For this reason, visitors to the nation’s wilderness areas are encouraged to leave no trace of their passing. These areas were specially chosen for their great natural beauty. Follow these rules to ensure those who follow will experience the same connection to nature that you did.