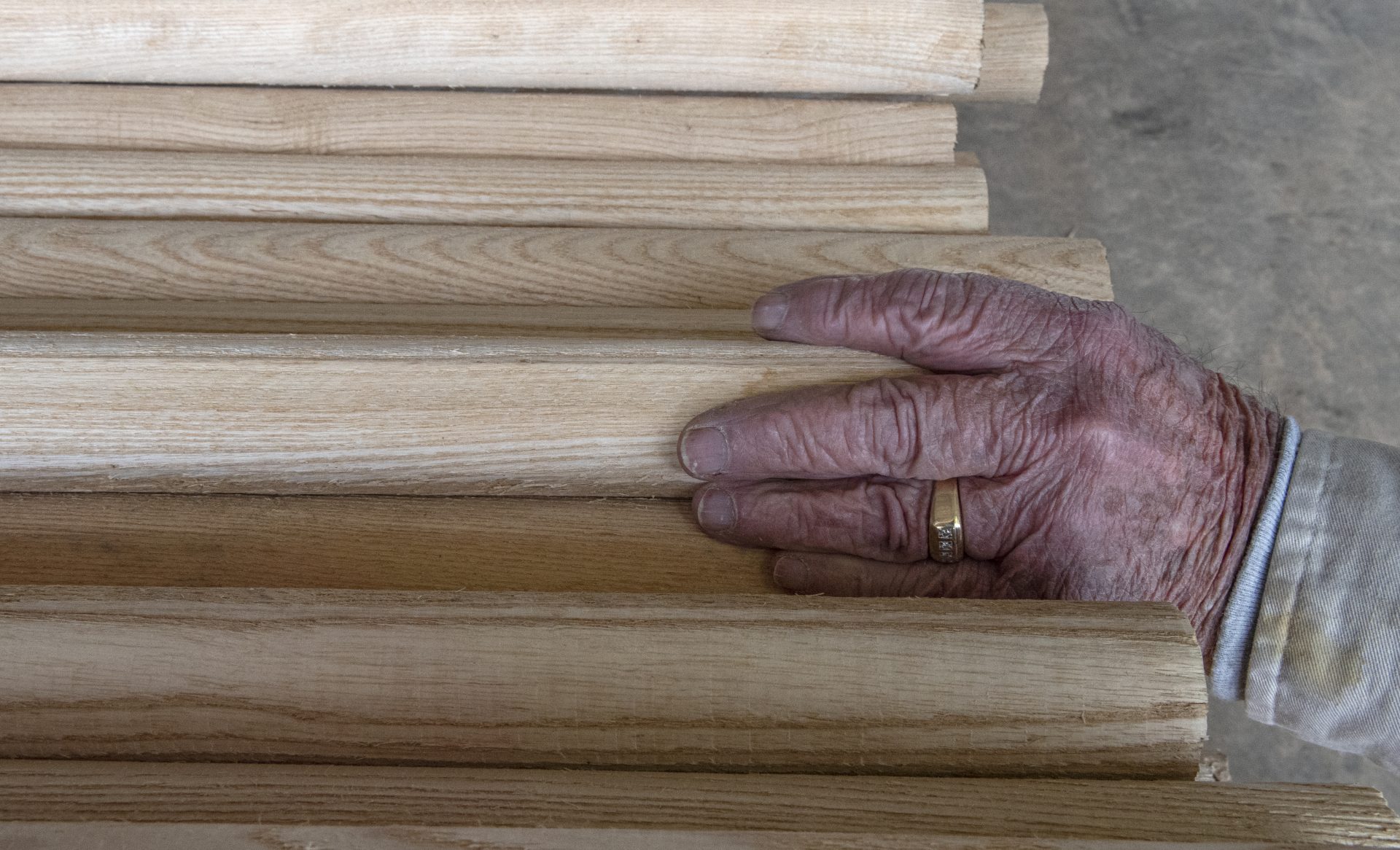 When he was 20 years old, William House bought his first truckload of handles and started peddling them much like a farmer would sell fruits and vegetables. That was in 1929, and today the business he launched is one of Barry County’s oldest industries. If it came with a handle, chances are House Handle Co. has one to fit it among the hundreds of handles in its inventory.

“He never made a handle in his life,” Kenny House says of his father. “All he ever did was peddle them. I went on some of them trips with him. I had a little old bag and hammer handles and stuff in it. He called on stores, I called on garages. I would sell one or two handles every place we stopped. I don’t know if they needed them or they just bought them because it was me.”

In time Kenny would cut short his schooling to help expand the route, which would go as far away as Denver. “Most of what he sold was made down in Mountainburg (Arkansas),” Kenny recalls. “I went down there twice a month once I got to driving and picked up a load of handles. Even then he was peddling their entire inventory.”

But the family enterprise really kicked off in 1964 when Kenny bought the first two of many lathes for turning handles. The machines were castoff relics from a closed shop that had been abandoned in a field near the Missouri-Arkansas border. “To get them old lathes I had to cut the briars out to get near them,” Kenny says. “This old feller, he helped me drag them out but he said, ‘you can’t take them home until I show you how they work.’ ”

That was a problem, Kenny soon discovered. The elements had been hard on the machines, which were rusted solid. It took three days for Kenny to tear them down and rebuild them enough to operate once again.

“Before I left down there I knew how they worked,” Kenny says. “I brought them home and started making a few handles. Then I bought a lathe here and a lathe there. Finally, about 30, 35 years ago we started buying factories, everything.” 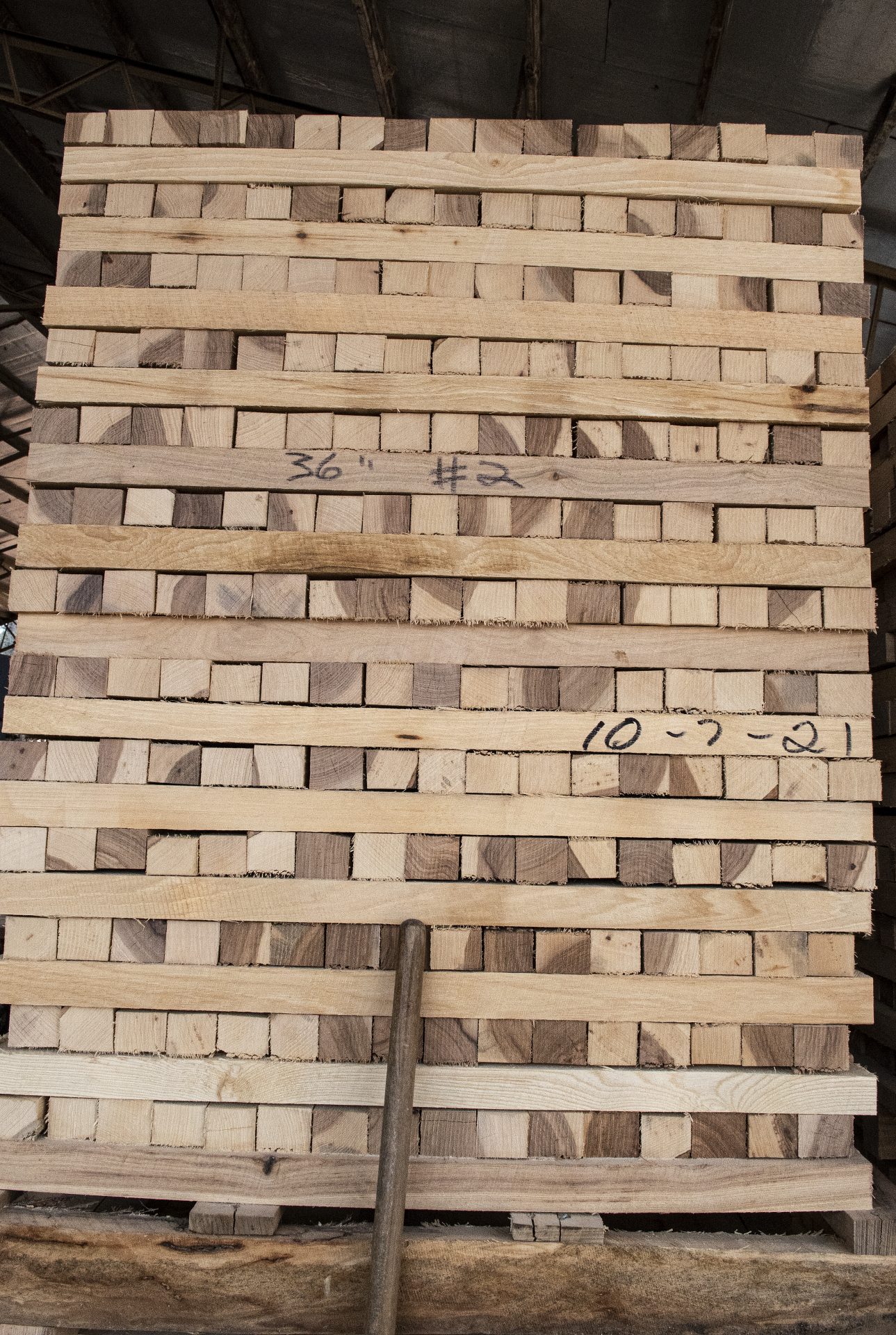 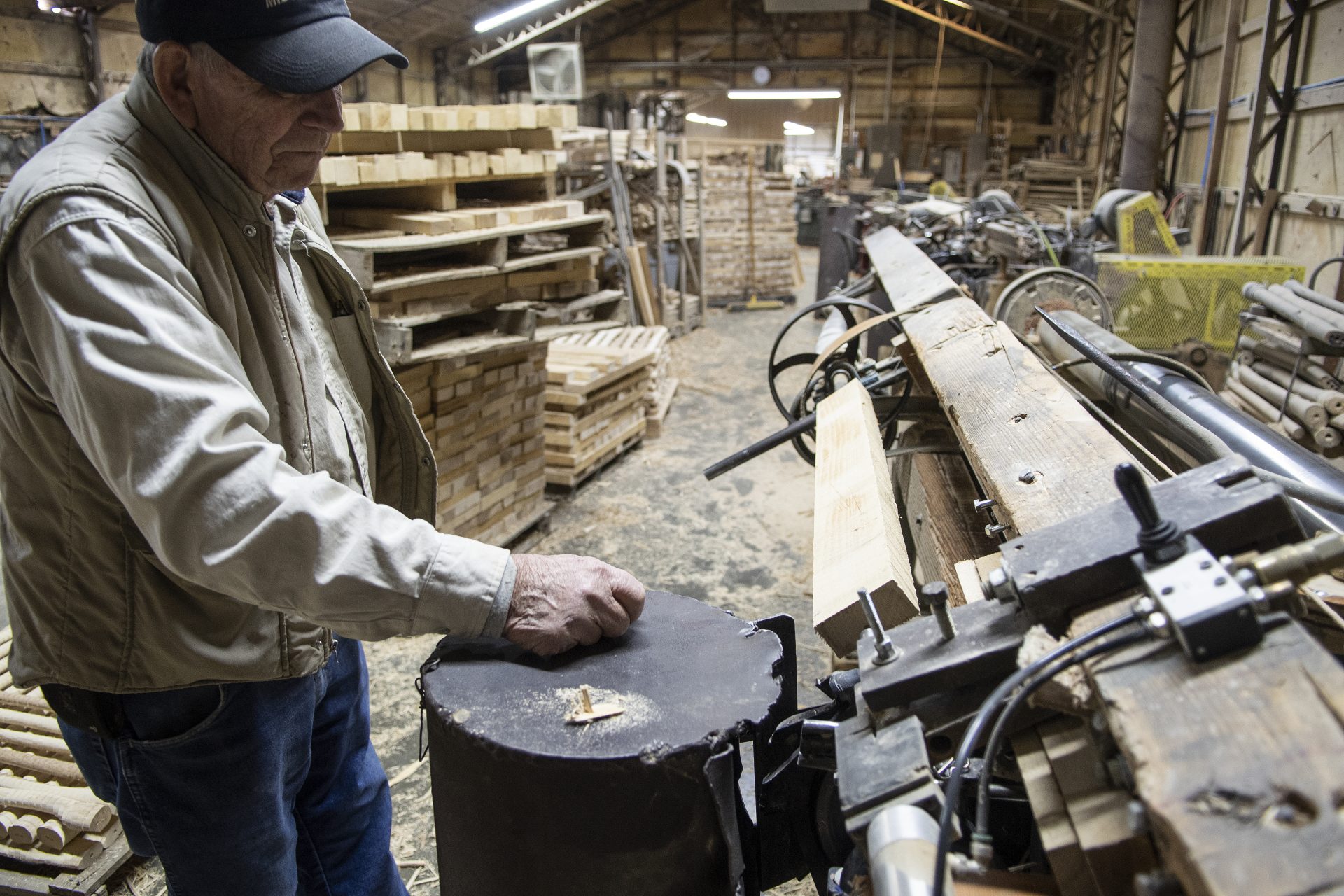 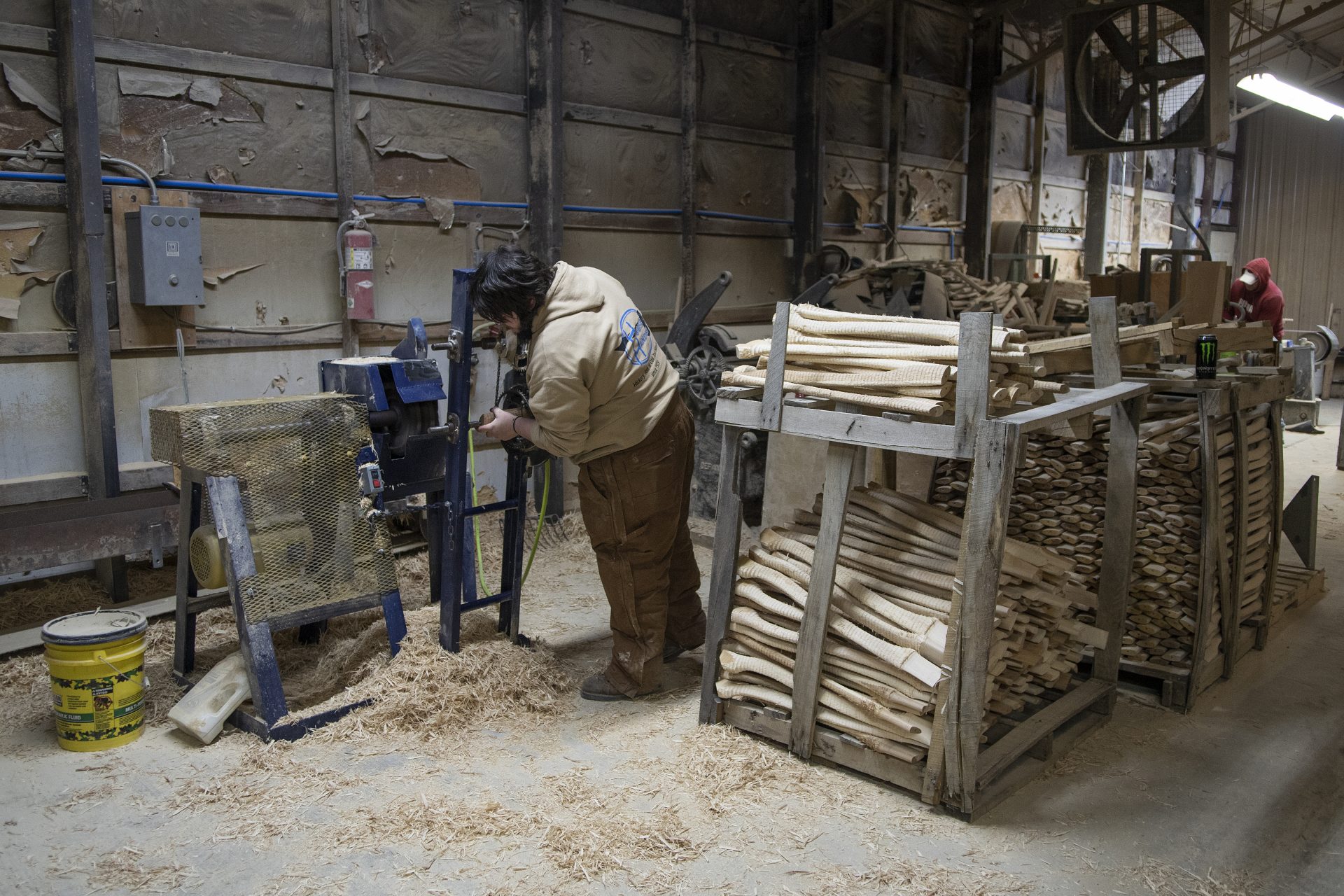 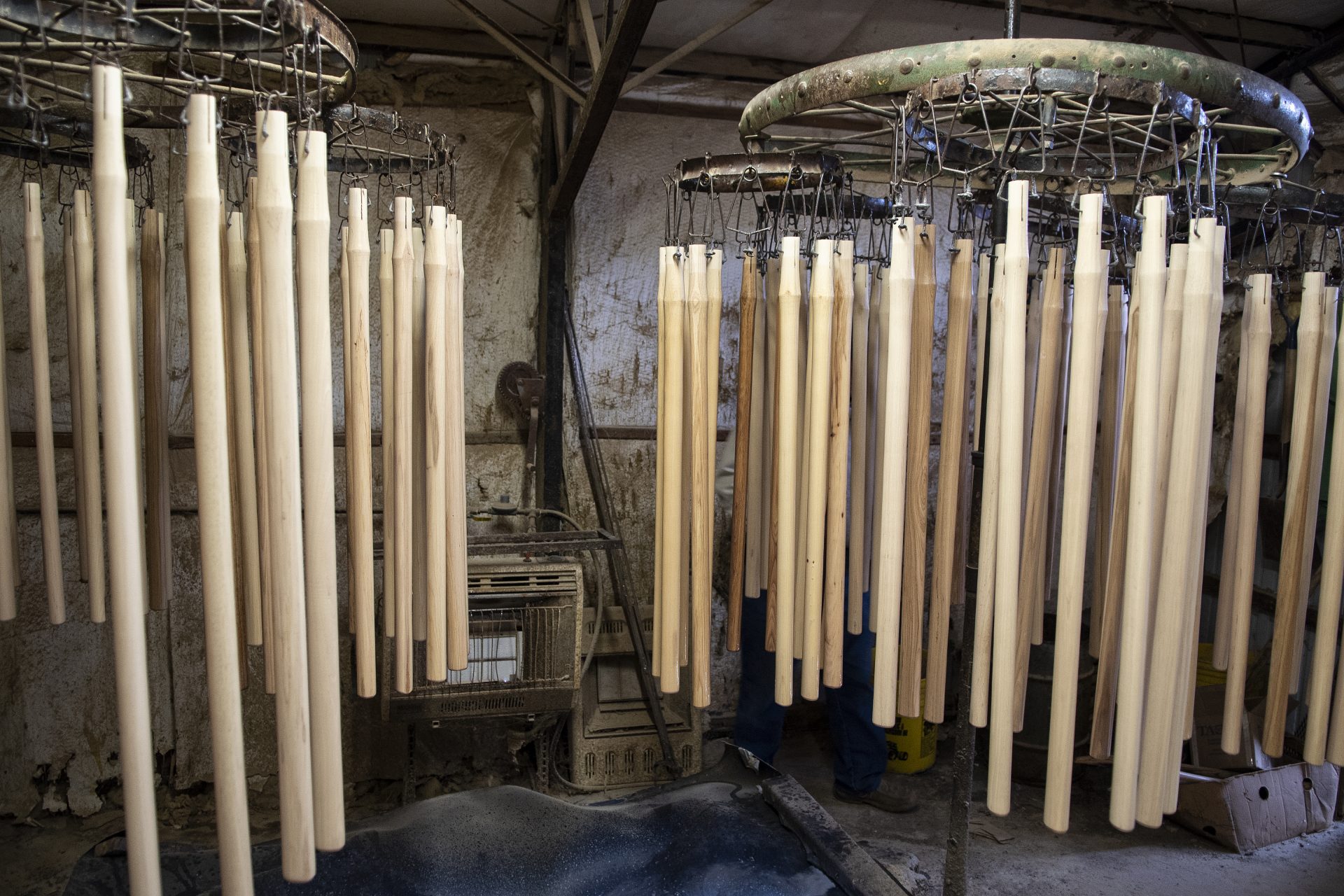 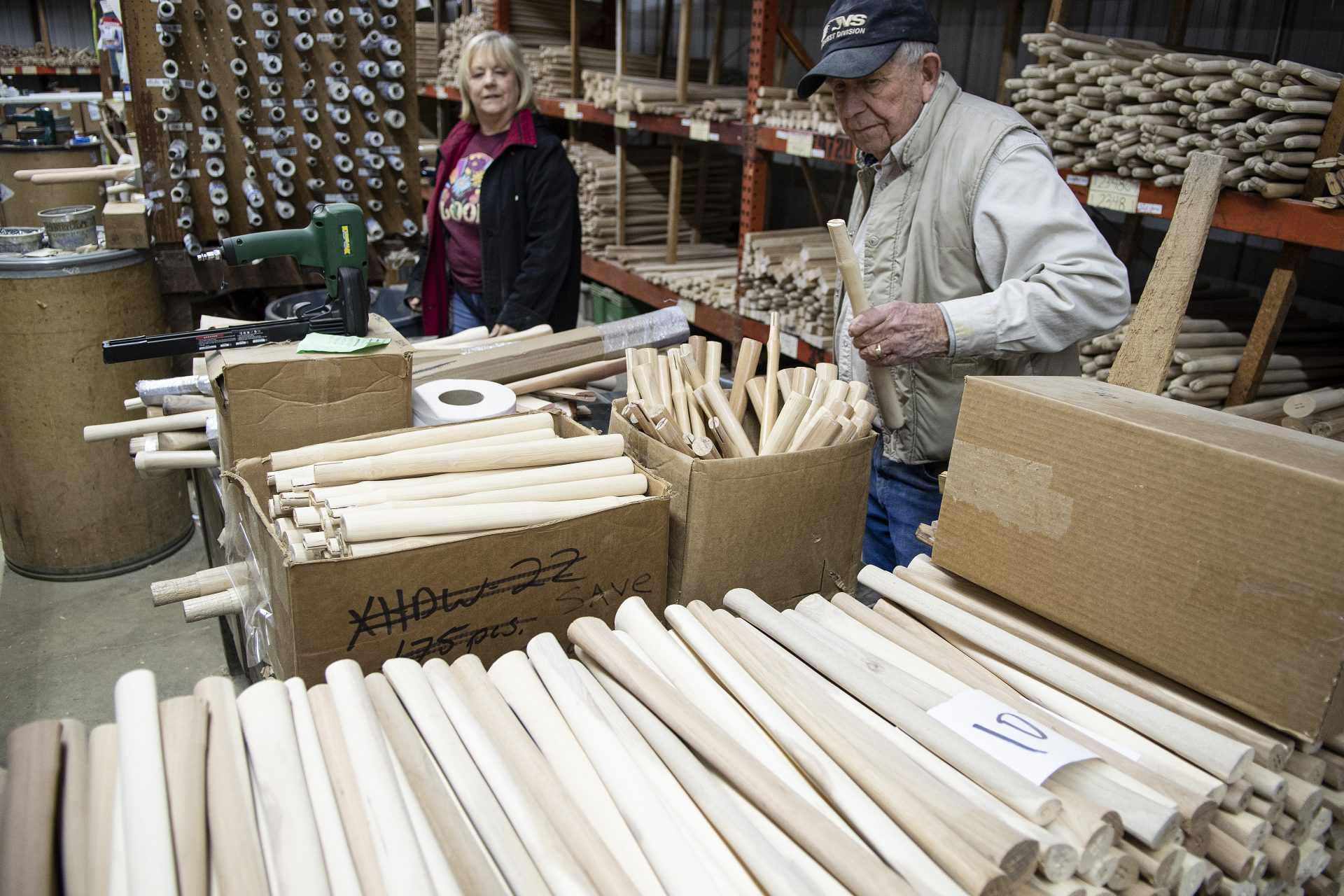 William retired in 1976 and lived long enough to see Kenny move the operation to 35 acres of land between Cassville and Exeter that is served by Barry Electric Cooperative. Here Kenny’s son, Chris, joined the operation and helped it greatly expand to its present status. “We ship more handles in one day than you could fit on one of them trucks,” Kenny says, comparing House Handle today to the peddling his father did in his time.

The company’s employees make more than 100 styles of handles, ranging from hammer handles in multiple sizes to handles for axes and tools as obscure as corn drags and ditch blades. Most of these are available in No. 1 and No. 2 grades based on the quality of the wood.

The products are made from hickory, ash or white oak depending on what works best for the handle type. For example, hickory works best for the shorter handles used on striking tools, while the straighter ash is used for long handles such as those for shovels.

The biggest demand is for sledgehammer handles, particularly those 36 inches long Kenny says. Right behind that are axe and shovel handles. Most of the handles go to farm supply stores such as Tractor Supply and Buchheits. Kenny says repeat orders often come in before the previous order is shipped.

The business also sees a lot of walk-in traffic from individuals who can’t find what they need elsewhere. “We are in business to sell handles,” Kenny says. “I tell people I’ll sell you half a handle, but I’m going to charge you full price. It don’t make any difference to me.”

Mark Meadows is one person who found what he needed at House Handle. “Living at Cassville, I naturally had heard mention of House Handle Co., but my only encounter with it was a few years ago when I was in the post office. Kenny House came in with an armload of handles, not wrapped, but each simply with an address tag. This past year I came across two old hammer heads in the junk of my workshop. I thought it would be fun for my wife and me to stop in at House Handle, thinking that we might find a handle for one of them, but both?  Not likely, as they were so diverse — a full-size claw hammer and a child’s hammer.

“When Chris House led us back to the warehouse, we were totally astonished. What an unbelievable sight. Thousands or maybe millions of pristine, shiny wooden handles of every shape were all neatly stored in countless bins. Chris went straight to one bin then another and handed me two handles that fit my hammer heads perfectly. I didn’t even have to shape them.”

There are just a few things in the House Handle catalog that aren’t made on-site. “I’ve got plow handles. I do not make plow handles,” Kenny says with a smile. “Them and walking canes I don’t make.”

It’s not that he didn’t try. Kenny devoted weeks to making cane bending jigs. He steamed them, bent them and put them in the jigs to dry. “I made like 60 or 70. I might have had 15 that weren’t broke. I said this ain’t for me,” he says.

The handles he does make are “turned” on handle lathes that may have made the handles William House sold in his early days. The oldest machine has an 1865 patent date and a lot of them aren’t much younger. Many were made by the Defiance Machine Works which stopped making woodworking machines in the early 1930s.

They begin life as precut blanks of hickory, ash or white oak supplied by sawmills in eastern Missouri. Depending on the style, the wood blanks might be rounded in doweling machines. Then they go to the lathes, which cut the rough shape using a series of cutters that remove shavings as the blank turns. From there another machine makes a perfect shape to fit the tool’s eye, then it is sanded smooth. The final step is to dip it in a water-based lacquer.

There aren’t many businesses left like House Handle. It provides an essential service for those who work with their hands. Whether ordered online or picked up in person, the handle will fit what it’s supposed to and the service will leave you wishing every business was family owned.

House Handle Co. is on Highway 86 west of Cassville. For more information, call 417-847-2726, send email to sales@househandle.com or visit www.househandle.com.