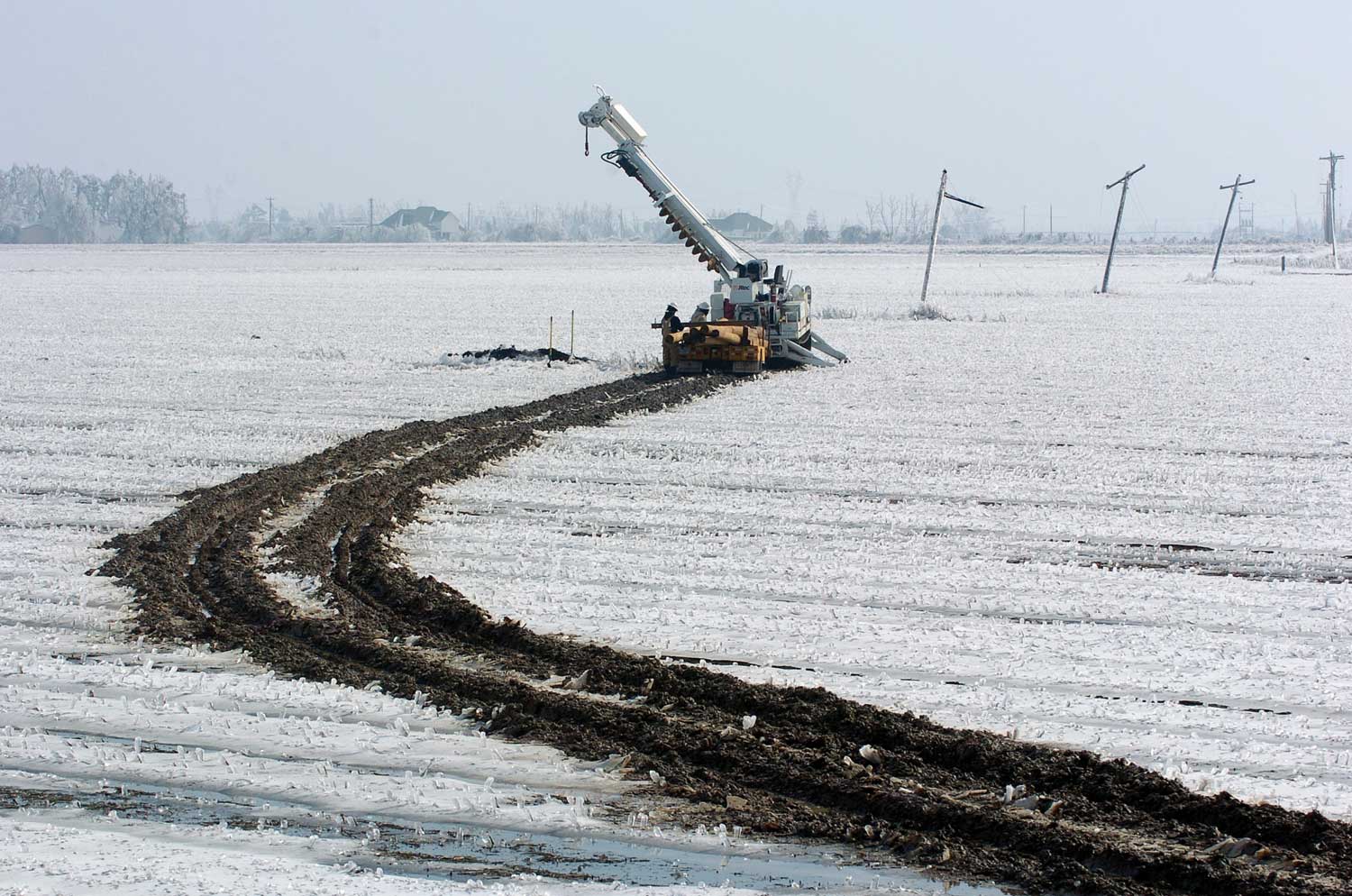 When it comes to weather, we never know what Mother Nature will send our way. Missouri has suffered through floods, fires, tornadoes, blizzards and ice storms, sometimes on the same day. But while the weather can be fickle, one thing is certain: Electric cooperatives will do whatever it takes to restore power.

That was the case 10 years ago when the ice storm of 2009 caused widespread devastation across southern Missouri. From Branson to the Bootheel, electric co-op members experienced something that only the most elderly could remember — total darkness.

“I remember turning off of Highway 25 to the gravel road where I live,” says Tim Davis, manager of Pemiscot-Dunklin Electric Cooperative. “I couldn’t see the road it was so dark. Me and my wife, we were raised here. We know where those roads were at and we still couldn’t see them.”

When the freezing rain that began Jan. 26 finally stopped and employees began assessing the damage, veteran linemen could not believe what they were seeing. Tim, who was operations manager at the time, recalls when the extent of the disaster struck him.

“When you see a grown lineman in tears, you know it’s bad,” Tim recalls. “They were in tears, more than one. I hadn’t been outside for a day because I couldn’t leave the radio. I finally got a break and went outside. I had no idea. It made me sick.”

One line between two substations had 80 poles on it. Tim learned that only one was left standing. Nearly 90 percent of the system was on the ground and hardly a meter was turning. Power was even off at the office until a generator loaned by Platte-Clay Electric Cooperative turned the lights on again.

Missouri’s electric cooperatives are no strangers to natural disasters. There have been storms that caused outages for more people. In 1984, 250,000 were without power in the wake of an ice storm that affected those living south of Interstate 70.

Comparisons between the ice storm that struck in January 2007 and the one in 2009 add perspective. In 2007, 120,000 co-op members lost power.
The damage was estimated at $52 million and the recovery effort prompted what was then the largest repair effort in the history of the state with 80 cooperatives from Missouri and seven other states sending assistance.

In terms of sheer destruction, the length of the outages and the monumental restoration effort that followed, nothing compares to the ice storm of 2009.

The storm caused more than $200 million in damages to electric co-op lines. More than 17,000 poles had to be replaced. A total of 3,337 workers — more than ever before — were sent into the fray. And the three weeks it took to restore power to the last members set another record.

In past storms, damage to high-voltage transmission lines was minimal. These lines, which carry large wires, are built to much higher standards. Some poles measure 3 feet in diameter at the base. But the 2009 storm snapped the H-shaped transmission structures owned by M&A Electric Power Cooperative like matchsticks. Across the flat Bootheel, miles of shattered poles stretched to the horizon. Heavy conductor lay on the ground. Piles of mangled hardware and broken insulators made the scene look like the aftermath of a battle.

“We had at least one section that was 26 miles long that did not have a structure standing,” says M&A Power Manager Daryl Sorrell. “26 miles without a standing structure is impossible to comprehend.”

M&A employees calculated the weight on each span of the line at 10,000 pounds for a 2-inch thick buildup of ice. But ice as thick as a man’s arm accumulated on these lines. In places where two lines ran close together, the ice was as big as a volleyball. Each cross arm carried the equivalent of two full-sized SUVs hanging from them. Like dominoes, the poles snapped under the burden. In an instant, 90 miles of the line came crashing down.

Loss of the transmission lines knocked offline four power plants owned by Associated Electric Cooperative. It would be an extreme test of the electric cooperative grid, but power continued to flow to those unaffected by the storm from plants located elsewhere.

Despite the devastation and the suffering that followed, lessons learned during those dark days from Jan. 26 to Feb. 18 ensured future storms are less of a problem for members.

SEMO Electric Cooperative — which faced a task equal to building a power line from St. Louis to Memphis in less than three weeks — began the practice of staging crews before outages take place, speeding repairs. Linemen now take trucks home with them so they are ready to roll at a moment’s notice.

Pemiscot-Dunklin, which suffered the most damage during the storm, has increased the strength of its lines. “We shortened our spans from 300 feet to 275, maybe 250 feet,” Tim says. “We use bigger class poles. We use heavy framing. We strengthened our guy wires and spread them out as far as we can. We’ve learned a lot. My staff will sit down the first of fall and go over precautionary things.”

Howell-Oregon Electric in West Plains now benefits from new equipment they learned about from contractors brought in to help restore power
in 2009. The contractors used tracked skid steer loaders, one fitted with an auger to drill holes and the other with a manipulator’s arm to move poles into place. These machines were a great asset in the cooperative’s heavily timbered service area, going where trucks could not. They are now widely used across Missouri.

When M&A Power repaired its lines, it added special storm structures every 5 to 7 miles. This will prevent the cascading damage that caused problems in 2009. As poles are routinely replaced the transmission co-op now is using steel structures that will support more weight than wood. More material is kept on hand and annual table-top drills solve potential problems before they happen.

“We are still working on things to harden the system,” Daryl says. “I’ve got to believe if the ice storm had not happened we wouldn’t be doing some of the things we are doing now. It changed the way we think. The lessons learned to continue, they don’t just stop when you get the last pole up.”

A statewide electric cooperative outage map created after the storm now shows emergency personnel the big picture so resources can be better allocated. Missouri’s electric cooperatives are better prepared for the logistics of feeding, housing and doing the laundry for large numbers of workers. They also have finetuned the mutual assistance process so that one call to the statewide office in Jefferson City speeds assistance to those in need.

“There’s been a lot of lessons learned for all the co-ops out of this,” Daryl says. “The whole system is getting smarter and better prepared in the event something like this happens in the future.”