If you’ve been to the Missouri State Fair, chances are you’ve seen him in action under an awning near the concert grandstand. Marker in hand, caricature artist Jim Dyke quickly sketches likenesses on paper, exaggerating details that show off his quirky sense of humor. For the past 28 years, the Jefferson City native has taken vacation time to spend 11 days, up to 17 hours each, in Sedalia, meeting thousands of strangers as well as reacquainting with friends he’s met over the years.

In the nonstop throng of fairgoers, live music and fried eats, Jim brings a bit of calm to the blur of motion unfolding around him. Rare are the moments when someone isn’t sitting in front of him having their image reproduced by the 54-year-old artist.

Jim says he really got into commercial art illustration during the class he took at Nichols Career Center in high school. “For three hours each day I affirmed art was what I wanted to pursue in life,” says Jim, adding he went on to graduate from Southwest Baptist University in Bolivar with a commercial art degree.

Right out of college, Jim worked as a T-shirt designer for a silk-screen shop, but his career path quickly led him to Jefferson City’s News Tribune where he’s been on staff as a graphic designer and editorial cartoonist since 1991.
Jim also owns Cottonstone Art Gallery & Frame Shop located in downtown Jefferson City, where he’s a bit like the man behind the curtain in “The Wizard of Oz.”

“As a one-man shop, it can get a little crazy sometimes,” Jim says, then smiles. “I do it all here: frame art I’ve created or custom frame items people bring to me, work on editorial cartoons for the newspaper and create special commissions, like murals or hand-painted silk neckties. Every day is different and I love that. Keeps things fresh.”

While the caricatures keep Jim busy at the state fair — as well as high school graduation parties and association meetings — his true passion is painting. And one of his favorite subjects is the Show-Me State and its history.
“I love history and I enjoy talking with people about it,” Jim says. “I can always tell when people come into the shop and want to know more about whatever caught their eye. I just take it as my cue to start talking about stuff.”
Jim’s gallery is a great place for anyone to stop when visiting the capital city. Not only can they view or purchase art, but there’s a wall of black-and-white photos recounting the early history of Jefferson City, including businesses long gone as well as images of the Capitol when it burned down in 1911 after a bolt of lightning struck the dome.

Anyone following Jim on social media often gets to walk through history as he shares stories about battles fought, memories of streets and buildings no longer in existence and history from his own family members dating back hundreds of years. Whether you lived it or not, Jim has a way of sharing history in a way that keeps you reading.

“Did you know Jefferson City has had three Capitol buildings?” he says, adding, “A temporary Capitol was housed in St. Charles until streets were laid out here.”

When he was born, his family lived in a house across from the Missouri State Penitentiary. “I would have been a baby the day James Earl Ray hopped on that bread truck and escaped from the prison in 1967,” he adds when talking about local history. “Things like that fascinate me.”

The artist loves when he can create special commissions, such as working with former first lady Jean Carnahan for the book, “If Walls Could Talk: The Story of Missouri’s First Families.”

“Each image I created was the introduction for each chapter in the book,” Jim recalls. “It was challenging because I was meeting her expectations and not just painting whatever I wanted to paint.”

The artist also enjoys photographing the gorgeous sunrises and sunsets over the Missouri River, many which end up in his art. 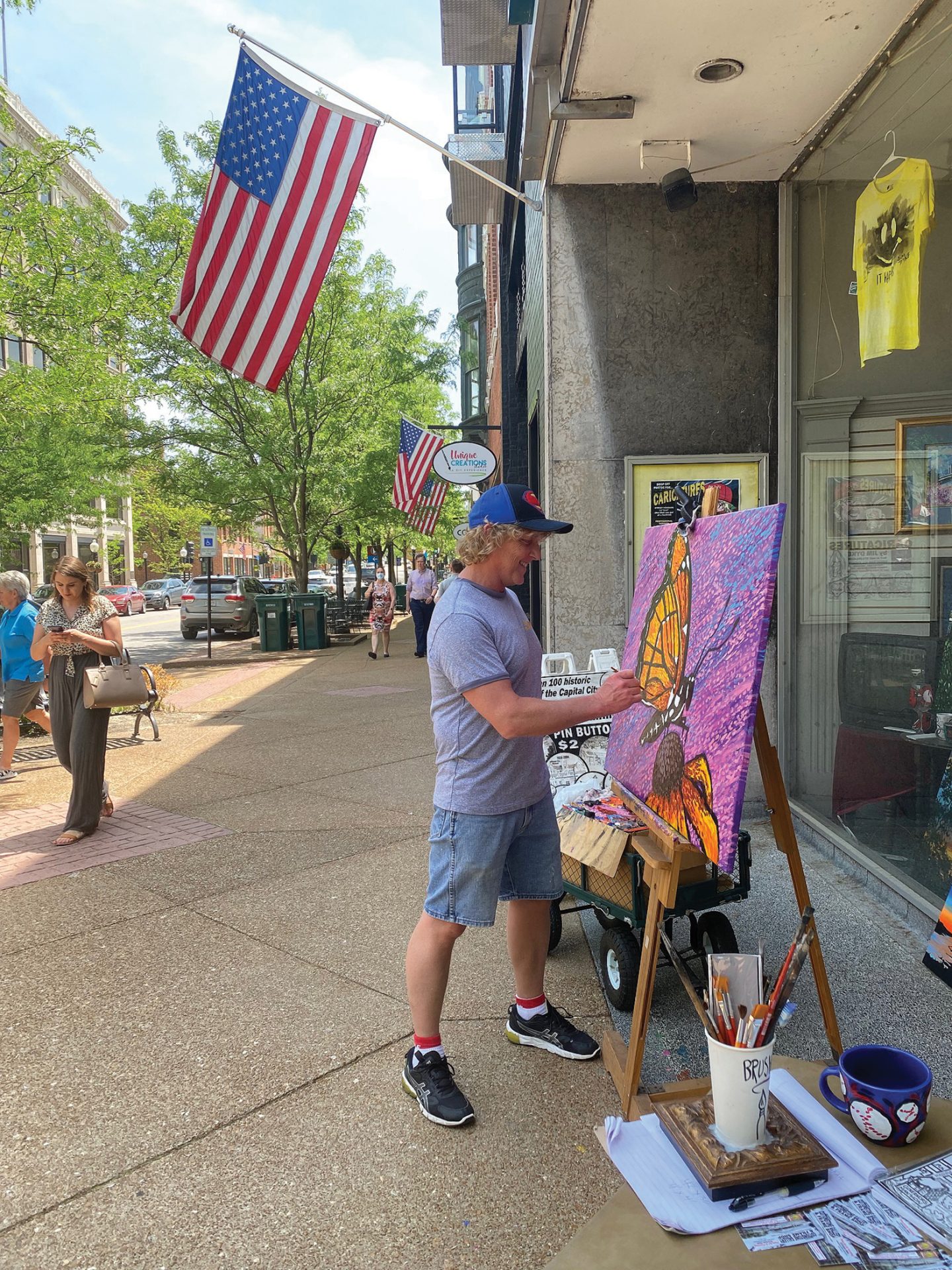 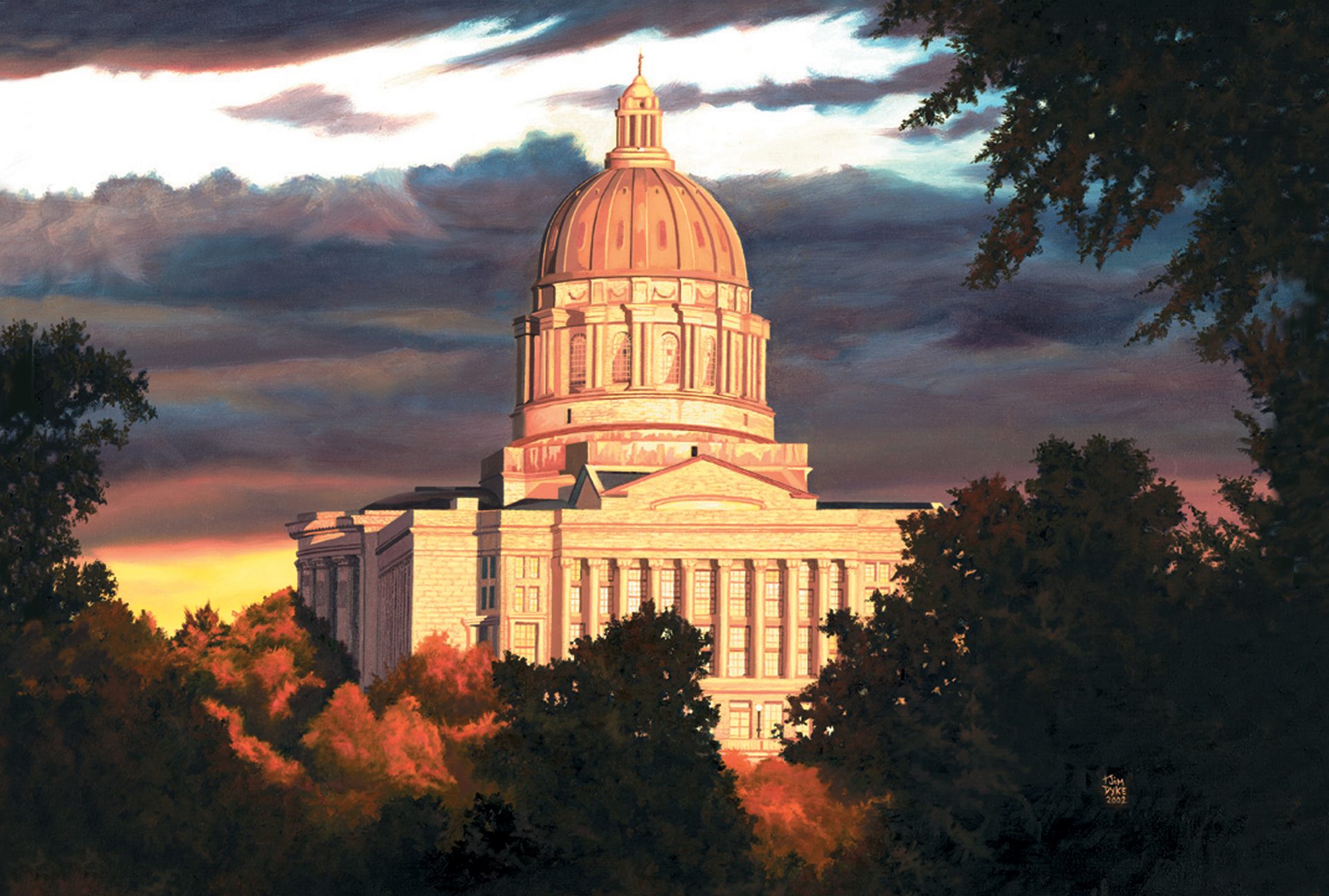 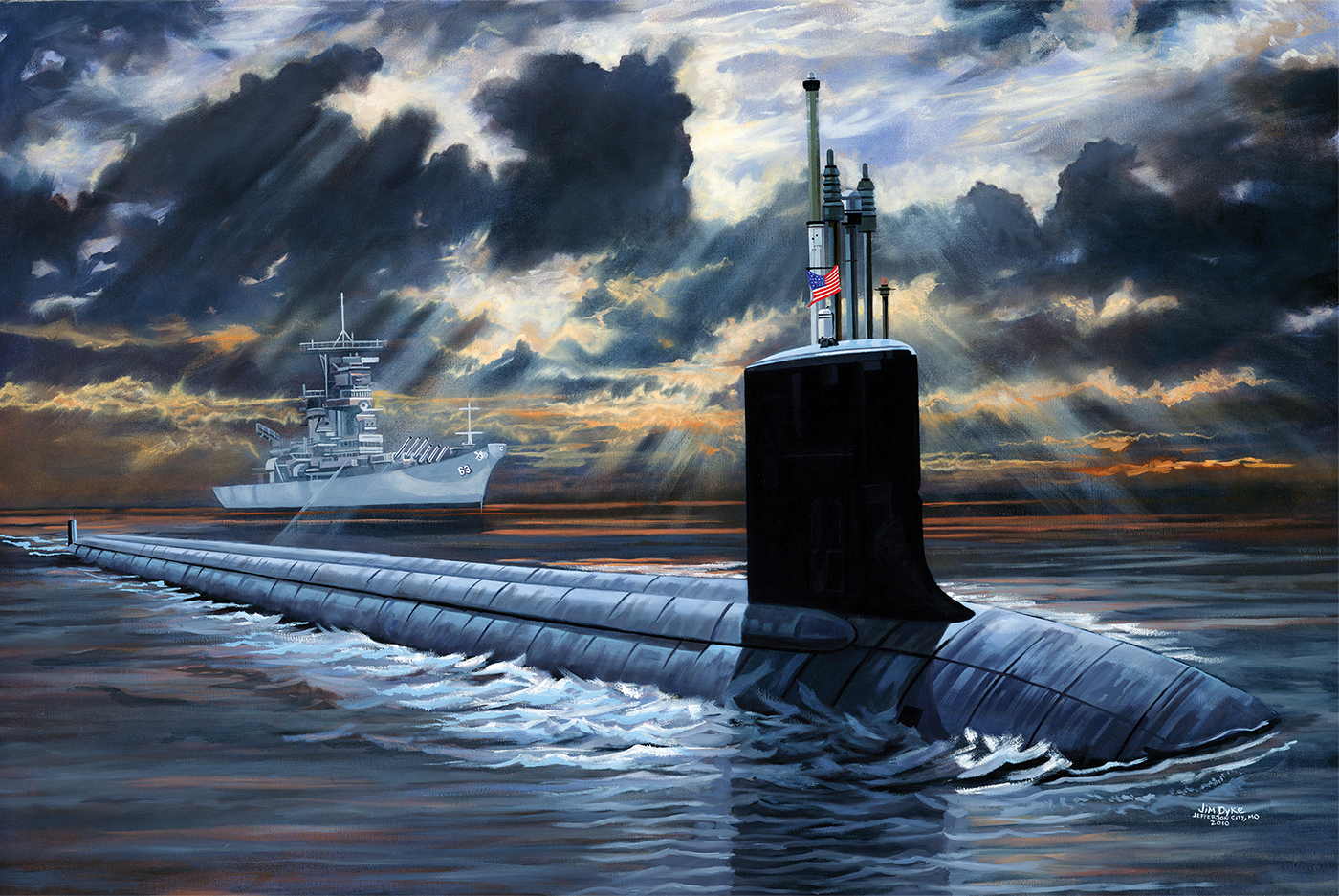 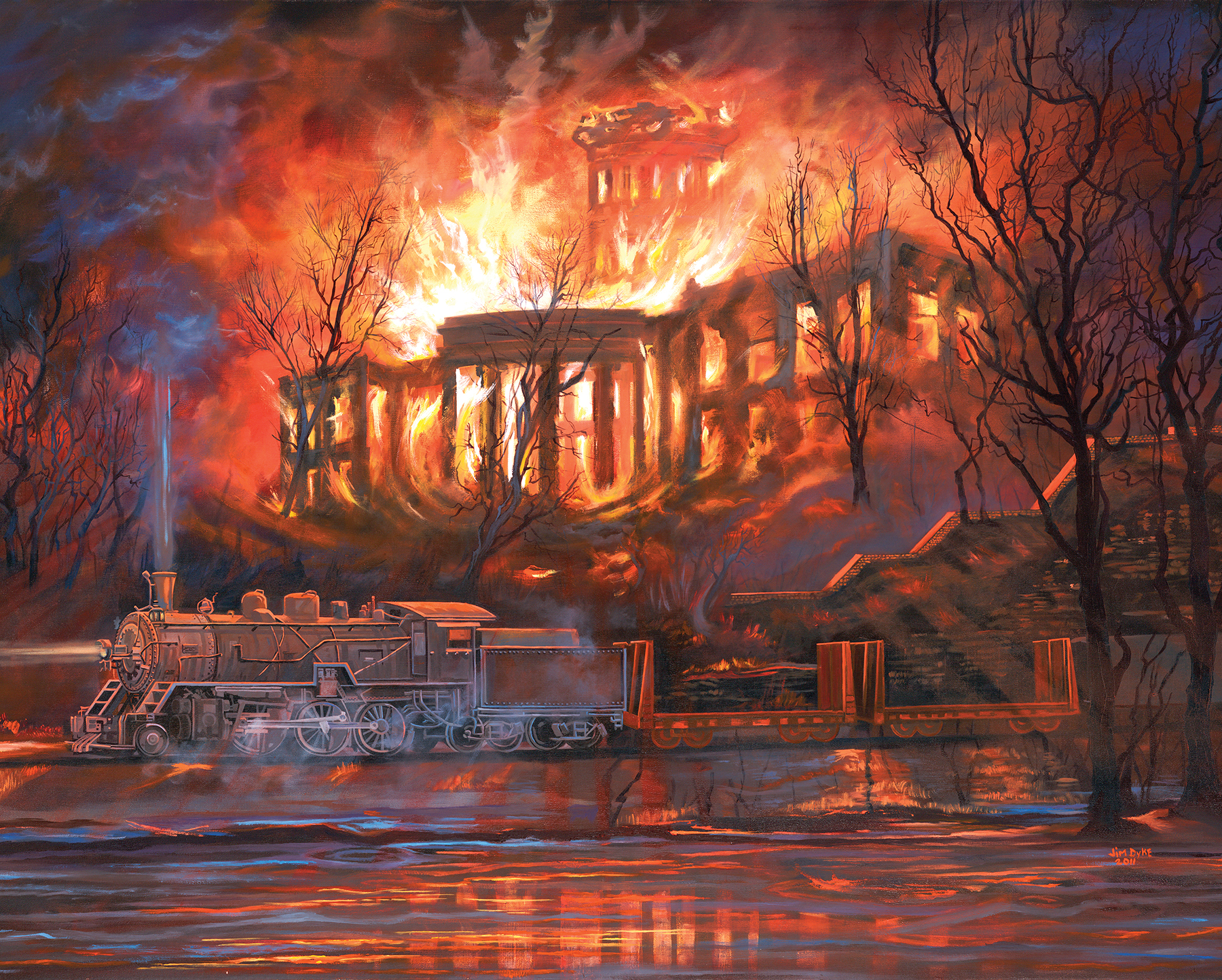 Missouri’s beautiful Capitol dome quite often shows up in the artist’s renderings. Patrons of Jim’s art will see he also loves themes which include trains, bridges and snow.

“My dad took us to the Capitol for entertainment when we were kids. In the summer, we would sit on the benches and look at the stars over the river,” Jim recalls. “Then he’d take us through the Capitol building and we’d see old flags with bullet holes or rips and stuff and I remember thinking, ‘This is the real deal. This flag flew during a battle when soldiers were being shot at.’  ”

Thoughts like that are why Jim often has items on display in his gallery such as the hinges from the Capitol gate fence from 1840 and pieces of railroad ties the trolley cars used to drive over downtown. “It all matters. When it’s taken down or destroyed, you might be lucky if you even have a photo somewhere for reference,” he says.

When he’s not at the gallery, Jim can be seen jogging around town or at home painting under the watchful eyes of his African grey parrot, Lindbergh. Current projects include a 12-by-7-foot mural he’s been commissioned to complete for a local business. And then there’s the upcoming Missouri State Fair, Aug. 11-21.

Jim recalls a day during the fair when he was asked by country singer Sheryl Crow’s team to produce a caricature to honor her for donating funds for the new pool in her hometown of Kennett. They also invited Jim down to an event to honor the singer, where he drew caricatures of Sheryl with the guests.

The artist says when it comes to his caricatures, people expect exaggerated features to be part of the final image. “If I draw it too normal, it’s boring,” Jim says. “People want me to have fun with the images, so I do.

“Then there are times someone well-known stops by at the fair, trying to be incognito. Somewhere there’s another famous singer with a caricature I drew.

“She was dressed in casual clothes and didn’t talk much, but let’s just say her ‘Tennessee Mountain Home’ is where she sits on the front porch on summer afternoons.”

So was it Tennessee’s own Dolly Parton? Jim’s eyes twinkle when he shares the account but nobody but he and Dolly will ever really know.

You can reach Jim Dyke at Cottonstone Art Gallery & Frame Shop, 116 E. High Street in Jefferson City; by calling 573-634-7646; visiting www.artistjimdyke.com or find him on Facebook.