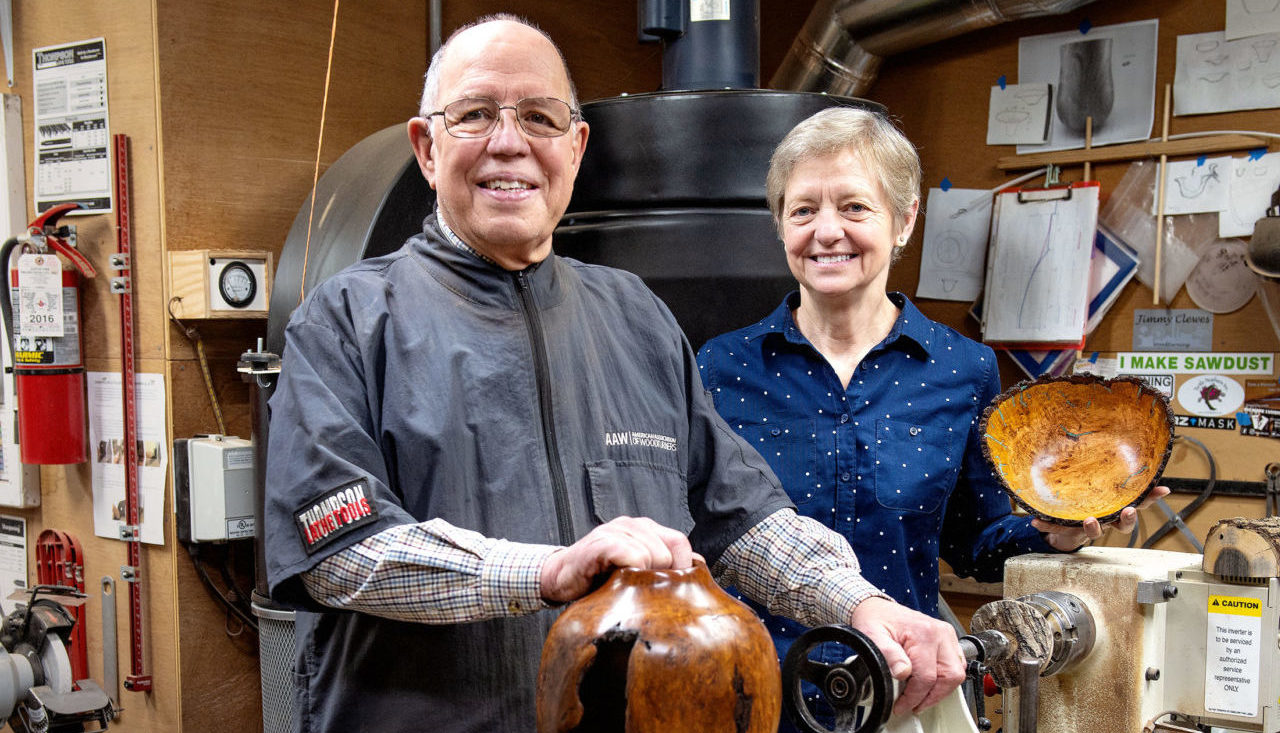 The air hangs heavy with the pungent scent of freshly worked wood as you walk into Steve and Valerie Doerr’s basement workshop. The floor shows evidence that the chips have been flying. “This is camphor,” Steve says as he nods toward a block of wood on the lathe. “Every time I work on it, the aroma gets stronger, but I think I’m used to it because I rarely smell it anymore.”

The unique wood is only one of many types of fallen timber the couple purchased after a hurricane hit Florida. Steve opens another door to a backroom where other pieces cure, awaiting their turn on the lathe. Thousands of board feet are neatly stacked as if in a game of Jenga, ranging from more commonly known oak, maple or walnut to more uncommon species such as Australian red coo-libah or red lemon eucalyptus, Hawaiian koa and South American monkeypod. And that’s only a few of the nearly 100 types the couple has on hand.

“Any wood we use comes from trees which have had to be downed for some reason or have fallen due to storms,” says Steve. “There’s a lot of beauty which can be brought out of the wood even then.”

Steve, a retired Joplin school administrator, is no stranger to woodworking. He began his foray into the creative outlet nearly 40 years ago by creating Shaker-style furniture for family and friends. “But you know how it goes with a busy career. You get tied up with projects or meetings and pretty soon months have gone by and your projects aren’t finished,” says Steve.

Steve began showing an interest in woodturning around 2007 and decided to add a lathe to his workshop. When he retired in 2010, Steve started woodturning as his new profession. A lathe spins the wood between two secure points, allowing Steve to scrape, gouge and carve pieces of the wood with razor-sharp chisels as the wood rotates.

“This way I figured I could at least turn something every few days and have the satisfaction of knowing it was nearly finished,” says the woodworker.

It wasn’t until 2014 that Steve’s wife, Valerie, also a retired educator, joined him in the shop. “Steve would disappear for hours downstairs. It was as if aliens had abducted him,” Valerie says, then smiles. “I jokingly say I got into it so I’d know how to use all of the tools and machines he’d purchased. I told him, ‘When you die, I’m going to inherit all this so I’d better know how to use it.’” 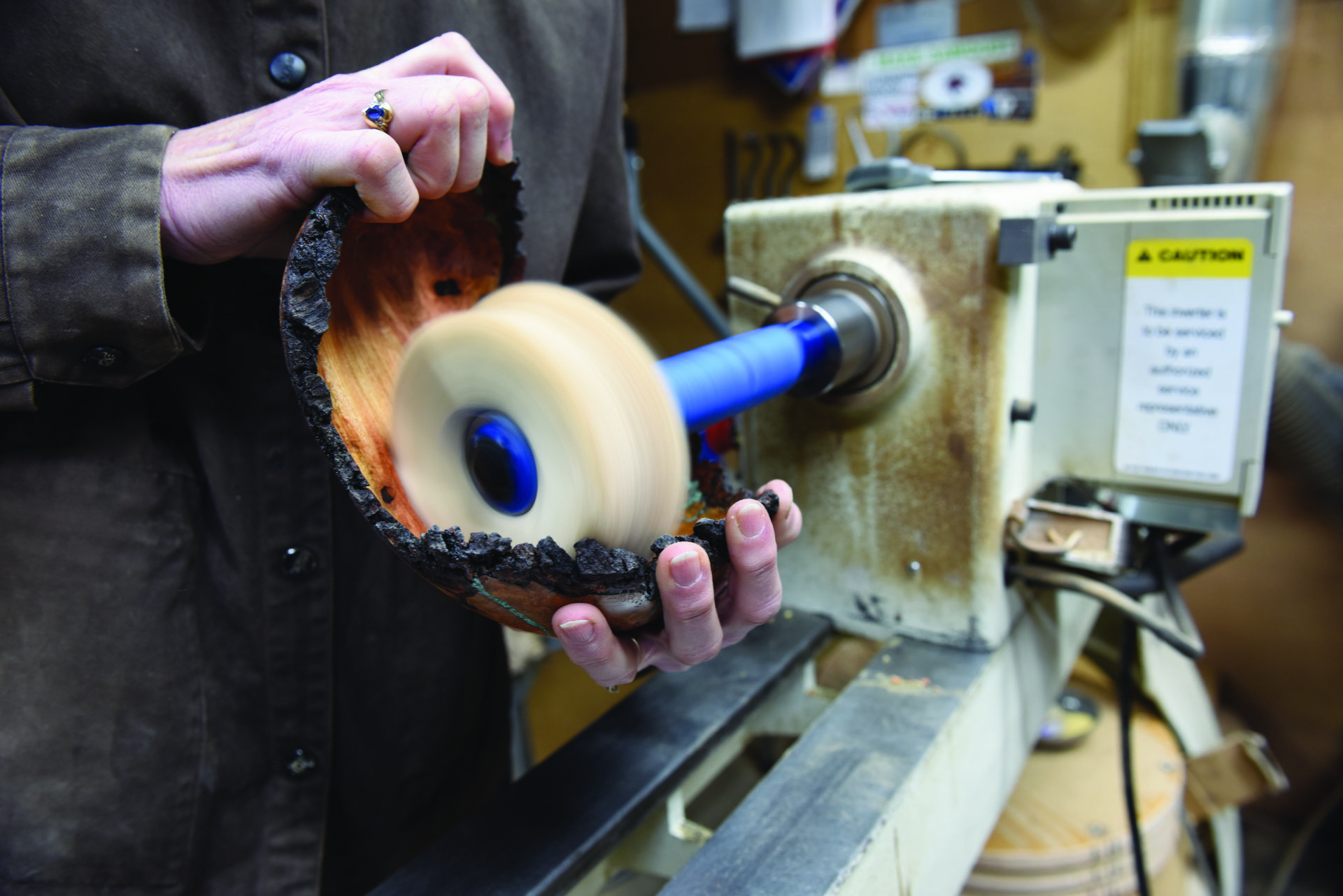 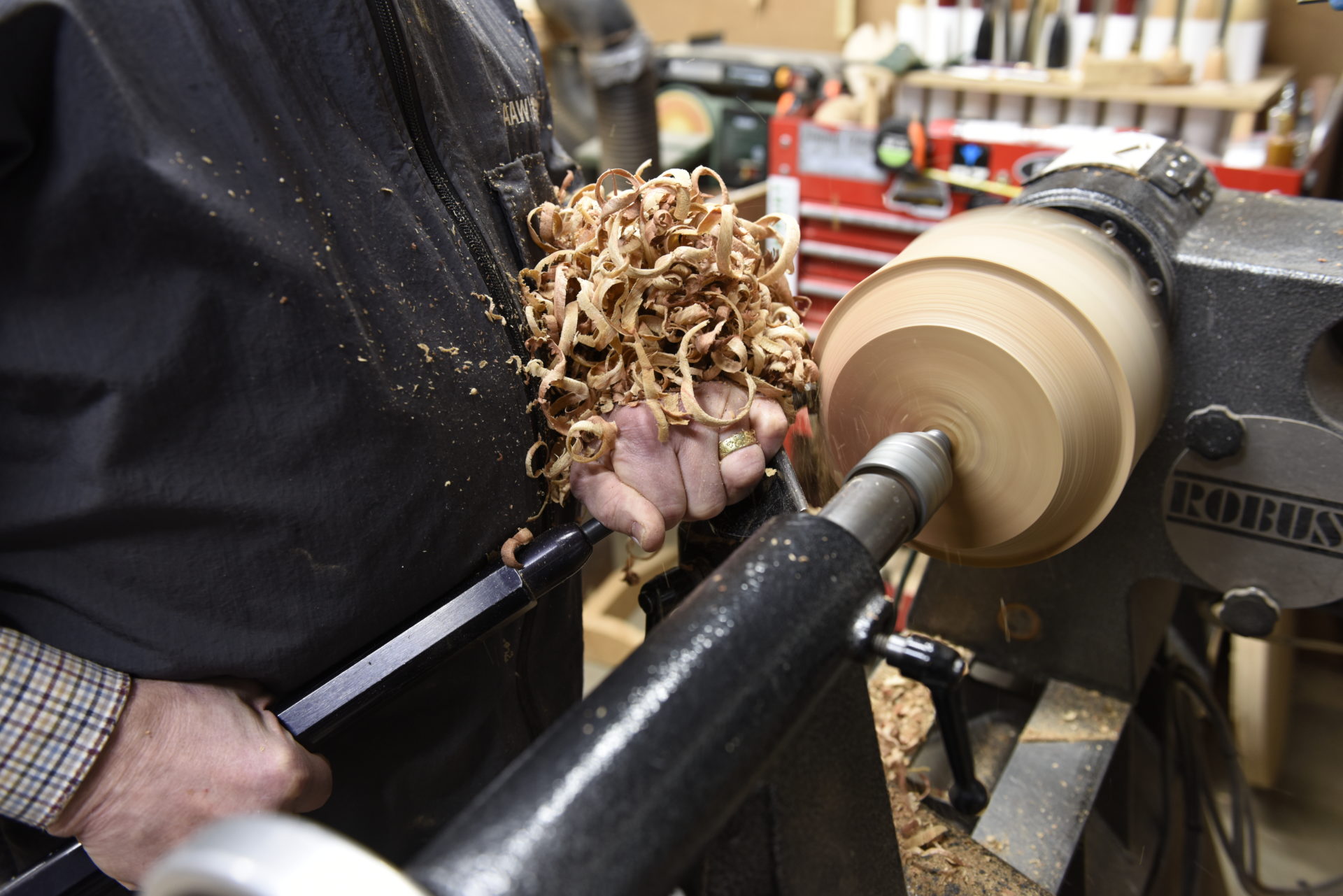 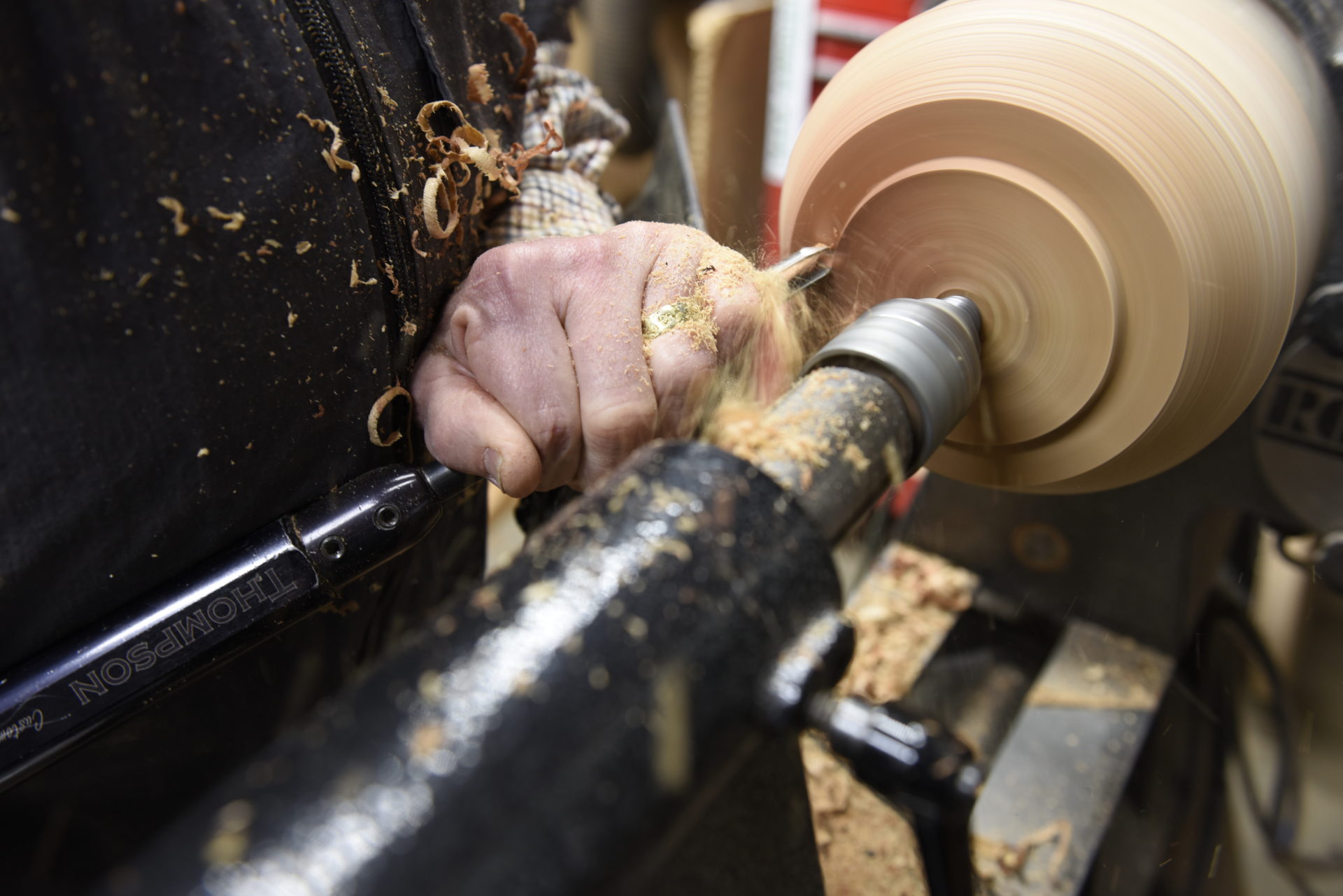 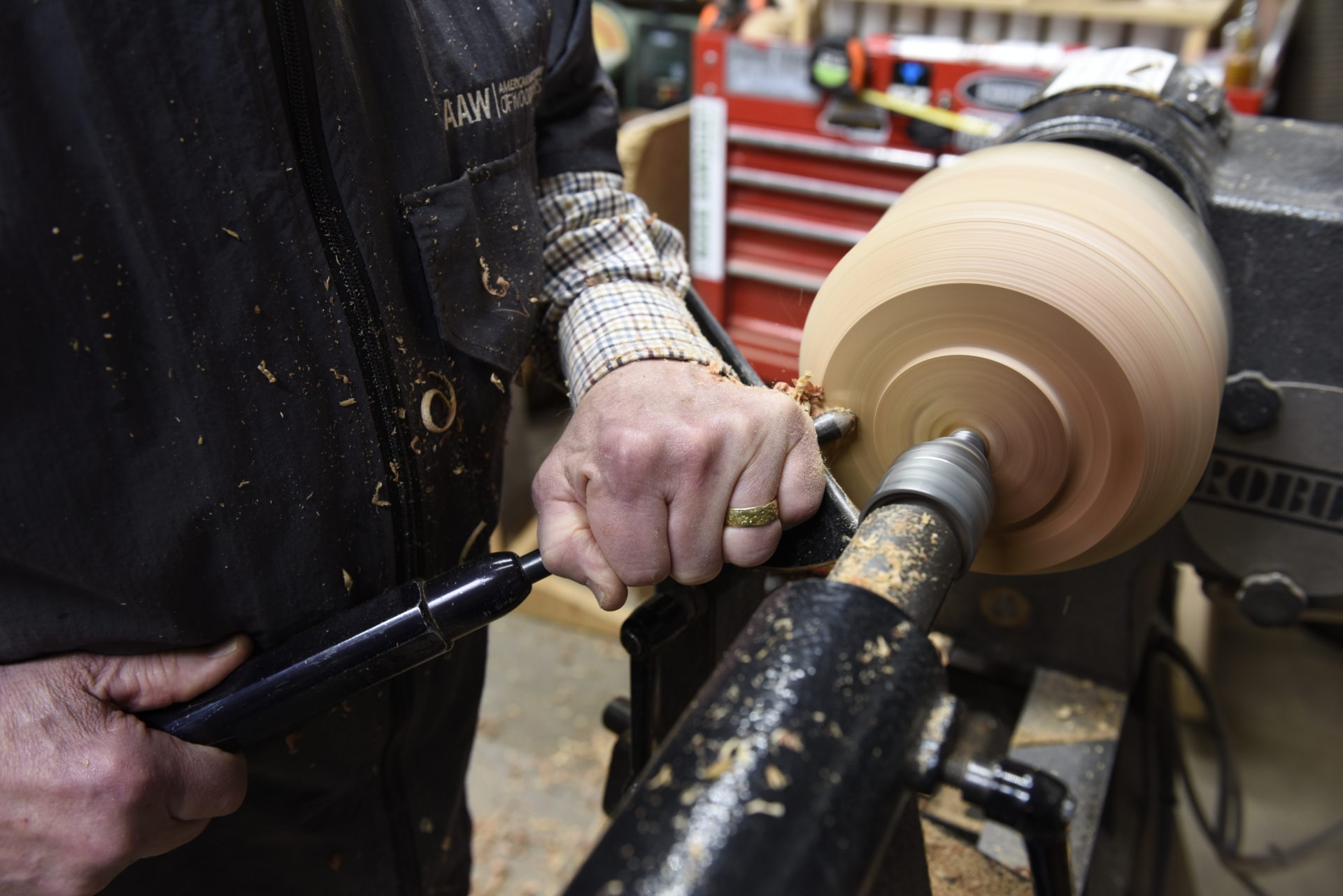 Like any good husband, he did pass down his small lathe for Valerie to work on and, of course, upgraded his machine to one which allowed him to work on larger pieces of wood.

That’s when the couple officially began The Wooden Doerr and have since shared a retirement business they both love and which allows their own styles to shine.

Once the couple has turned the desired form on the lathe, they hollow out the piece if needed. Next, the items are sanded and dipped in a denatured alcohol bath. The pieces are bagged and allowed to dry, then dipped in a blend of oils. The final step is to add coat of carnauba wax to give each piece a high gloss finish.

Tom Lynch, a retired Springfield dermatologist, is a big fan of the Doerrs and their art.

“You might say I plant trees for a hobby, so when it was time for some of them to be trimmed by the city utility, we ended up with about nine different species of wood cut into logs,” recalls Tom. “I put the word out to the local woodturners club to come and get it, and they did. That’s when I met Steve.”

Over the years, Tom says he’s had the Joplin wood-turner make gifts for his family as well as for people he’s done business with. “I can’t say enough about Steve and Valerie’s work. I know a lot of woodturners and their work is absolutely top of the line. It’s simply gorgeous.”

He also appreciates the fact the Doerr’s always include a “little resume” with each piece, sharing the history of the wood and where it came from, making sure to sign, date and number each piece.

Every species of wood brings something different to the lathe, but the couple each have favorites.

Steve loves working with burl wood (an irregular growth on the tree) of any type because the grain pattern always creates a one-of-a-kind piece. Another favorite? Figured big leaf maple. “If the wood is dyed, it reflects light with a 3D iridescent effect,” Steve says. Valerie enjoys working with cherry burl or Texas ebony because she likes how the turquoise she often adds contrasts with the wood grain.

“It’s a bit of a treasure hunt. You don’t ever really know exactly what you’ve got until you cut into the wood,” Steve adds, noting that gnarls and cracks in wood add unique character to each piece.

Ten years ago after an EF5 tornado struck the city of Joplin, Steve wanted to help his fellow citizens create a positive memory from the calamity and ruin. He began gathering pieces of the old, uprooted oak trees which used to stand tall outside Joplin High School and began creating vases, bowls and pens for the staff and alumni. Today he says he only has enough wood to make a few more pens but is glad he was able to gift what he could.

“When President Obama came to speak at Joplin’s commencement the following year we gave him one of those pens,” says Steve, noting a pen was also given to then-Gov. Jay Nixon.

COVID-19 halted the couple’s art show schedule, which usually includes 12 to 14 events per year. “We’ve been part of a couple of Zoom art shows, but it isn’t the same as going to a show and being able to see and touch the work,” Steve says. “We’re just now starting to book a few shows for later this spring.”

Until then, the couple spends part of each day in their shop, turning and buffing out new works of art.

“Last year we completed nearly 200 pieces each,” he says, adding their wood work starts around $20 for one of Valerie’s pendants and runs up to $500 for one of Steve’s hollow forms or round shields, which can be as large as 25 inches in diameter.

“I like to say God’s covered up some of his most beautiful artwork with bark and he’s given us the privilege to expose it for others to enjoy,” Steve says.