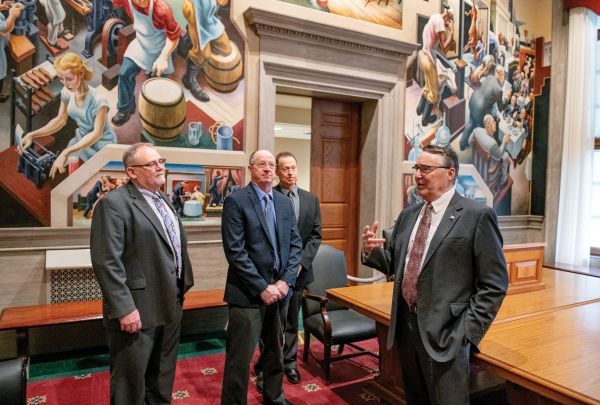 State Rep. Mike Stephens leads his constituents from Southwest Electric Cooperative on a tour of the famous Thomas Hart Benton Mural in the House Lounge of the Capitol.

An electric cooperative grassroots army descended on the state Capitol Feb. 4-5 for the annual State Legislative Conference. The event gives legislators a look at the issues affecting electric co-ops and their members directly from those they represent back home.

Missouri Gov. Mike Parson welcomed those attending, saying “I think the heart and soul of Missouri is represented here in this room.”

He gave an update on broadband, workforce development and infrastructure from his State of the State address. “You know how expensive it is to go out there and build this,” he said of rural broadband. “The point I make is the co-ops have had this thing figured out for years and years. They provide everyone in Missouri with electricity and it was expensive to do that. But the point is it can be done and it should be done and it will be done.” 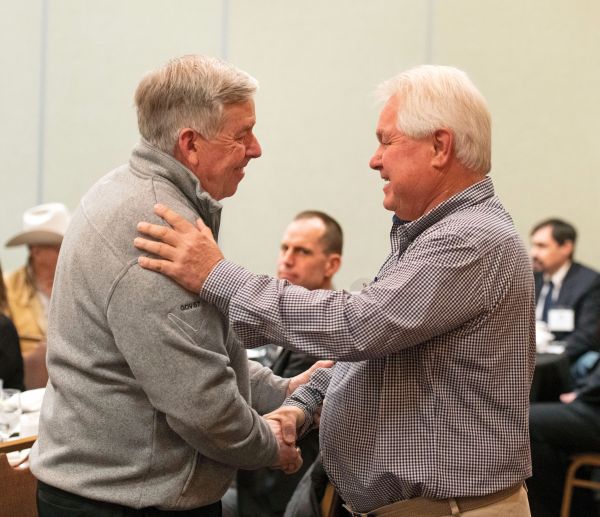 The governor also talked about his plan to issue a package of bonds that will fund replacement of 250 bridges, many of them in rural areas. He called the approach a “Band-Aid,” but also a step forward in rebuilding the state’s critical infrastructure.

Brent Stewart, who heads the electric cooperative legislative effort, talked about the issues that would later be shared with legislators. One of these builds on the governor’s plan to train Missouri’s workforce for the jobs of the future.

A measure being considered by the House and Senate would create a lineworker license plate. Funds raised from sales of the plates would go to lineworker training programs.

A second issue deals with taxation of wind farms. Under current law, privately owned Missouri wind farms are assessed and taxed at the local level, just like the coal and gas power plants owned by Associated Electric. However, wind farms that are owned and operated by for-profi t investor-owned utilities are not locally assessed, but rather assessed “centrally” at the state level. Two of Missouri’s investorowned utilities announced new utility-owned wind farms. In response, several bills have been fi led on behalf of local taxing entities that would assess and tax those investor-owned wind projects locally so the full tax revenue stays where the farms are built.

A third issue deals with electric vehicle charging stations. A Western District Court of Appeals decision requires anyone operating charging stations be regulated by the Public Service Commission. Two bills have been introduced that would reverse this decision for some, but not all, of those interested in providing EV charging. AMEC is working with a broad coalition to come up with acceptable amendment language.