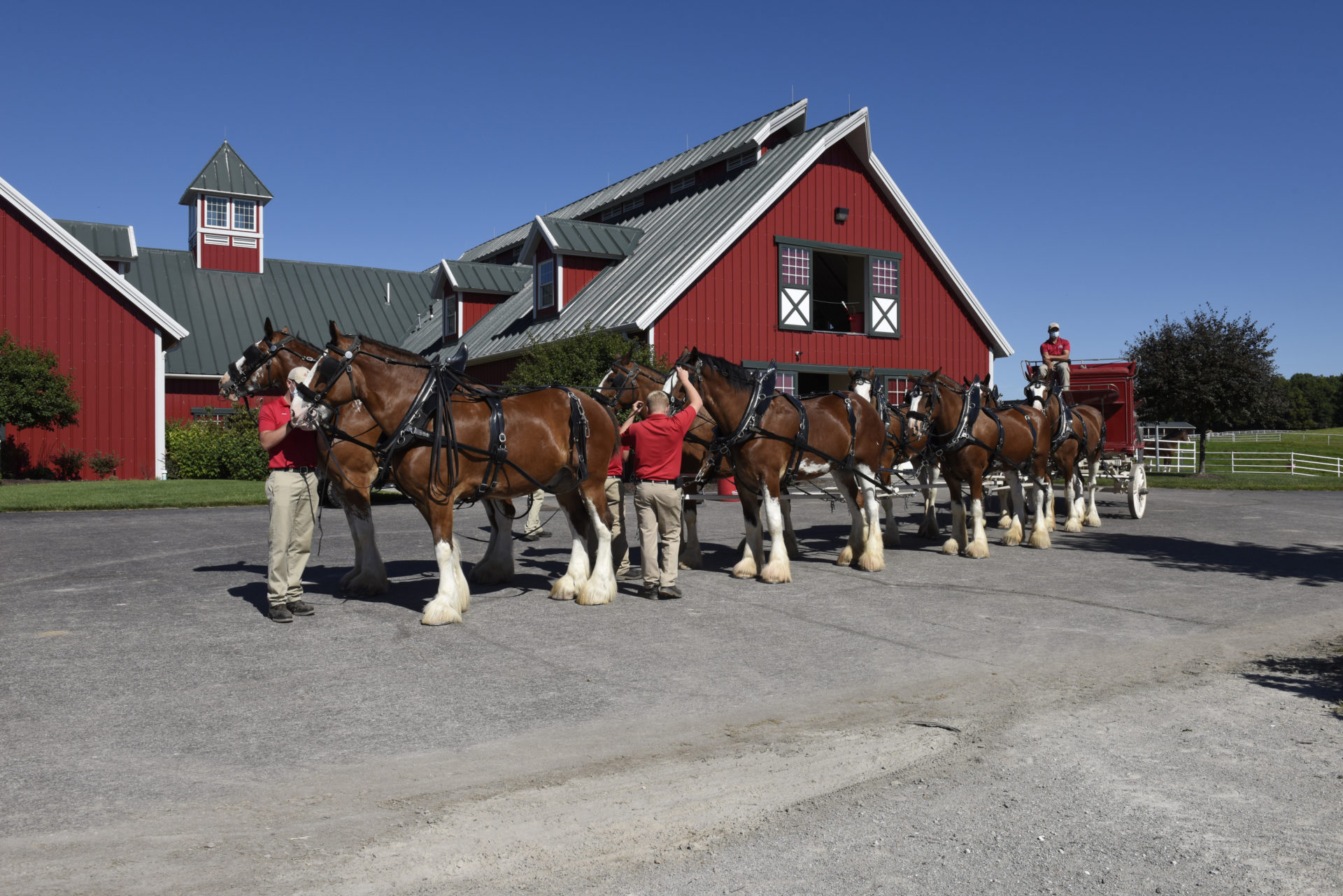 Where equine legends are born and trained

They eat. A lot. An average menu for the day includes around 50 pounds of timothy hay (custom grown in Idaho) and up to 10 pounds of grain washed down with 30 to 40 gallons of water. But when you average 2,000 pounds, stand 6-foot tall at the shoulder and have hooves as large as dinner plates, that sounds about right.

Nearly everyone has seen the iconic Budweiser Clydesdales in one of their many heartwarming Super Bowl commercials. The famous equines have been part of Budweiser’s history since 1933 when August A. Busch Sr. was given the gift of a six-horse Clydesdale hitch by his two sons to celebrate the repeal of Prohibition. He began using them to market his beer, making the storied horses part of equine history.

Barring a pandemic, these gentle ambassadors are usually making hundreds of appearances across the United States each year. When tours begin again, visitors will be welcomed by plenty of neighing giants at Warm Springs Ranch on the outskirts of Boonville, the headquarters for the breeding and training facility for the famous Budweiser Clydesdales.

“We were open a few months last spring, then closed to the public for the health and safety of our guests and staff,” says Mark Boese, supervisor for herd management at Warm Springs Ranch. Mark, who has worked with the Budweiser Clydesdales at their various hitch locations since 1999, says the ranch was able to offer a drive-thru holiday lights tour last year and says they hope to open things up more to the public later this year. One of the Clydesdales, Stan, will be glad to see people again because he’s the “poser” in the barn. “He loves having his picture taken and being petted on,” says Mark.

The ranch, served by Co-Mo Electric Cooperative, is currently home to 65 horses annually on 300 majestic rolling acres located just off Interstate 70. You can drive by and often see Clydesdales grazing in the rolling pastures along the road, but visitors must purchase tickets online to see the inner workings of the famed horse home.

According to Mark, moving the training facility from the East Coast to Missouri made sense, since the breeding facility had been at the Boonville location since 2008. Six other staffers help Mark care for the horses, a position which includes training up to 10 horses per year.

Workdays start for the ranch staff around 7 a.m. with all hands on deck feeding the horses in the barn and paddocks and mucking stalls. Depending on the time of year, by mid-morning staff may be checking mares to see which ones are ready to be bred, a process which is carefully overseen by Mark and the staff in a special breeding area in the barn. As time draws closer, the expectant mothers are placed in the barn and put on a computerized foal alert system so Mark knows the minute they go into labor. If all goes as planned, a beautiful, leggy 150-to 180-pound Clydesdale baby is born 11 months later.

Mark says the farm usually aims for 20 foals per year. Of those, Mark hopes half of those are colts (males). Any Clydesdales chosen to move on to hitch training will be gelded later.

“Of those 10 colts, we’ll hope to have half with the right color, markings and disposition for us to train for the eight-horse hitch so they can pull a beer wagon,” Mark says.

To be chosen as a member of the hitch team, the Clydesdale must be bay colored, stand 18 hands (6 feet) at the shoulder and weigh between 1,800 and 2,300 pounds. Even more precise, he must have a black mane and tail and broad white blaze and four white stockings. According to Mark, horses that don’t fit the specific marking criteria can still be used as broodmares and traded with other breeders across the United States because the bloodline is still so desirable.

“We started choosing future hitch team members soon after the foals are born,” Mark says, noting training officially begins around age 3. By then, the horses have been around people and handled enough that the staff knows their temperament — which is pretty much like that of a giant friendly dog.

That’s when the horses start wearing the custom-made $10,000 harnesses and begin hitch practice every day for nearly a year. The process is tedious and well-documented by the staff. By the end of the year, each gelding has learned to pull in every position on an 8-hitch team. 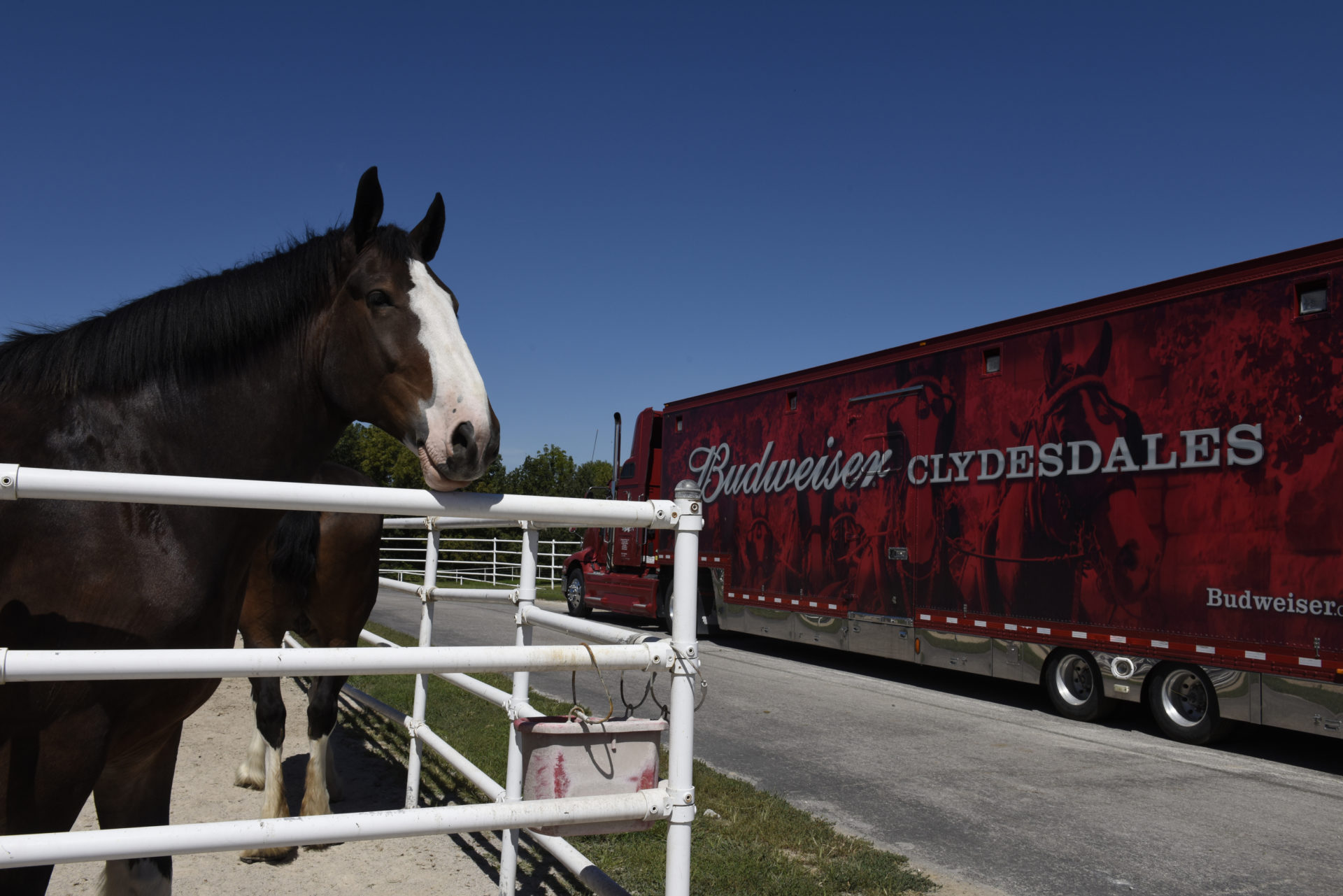 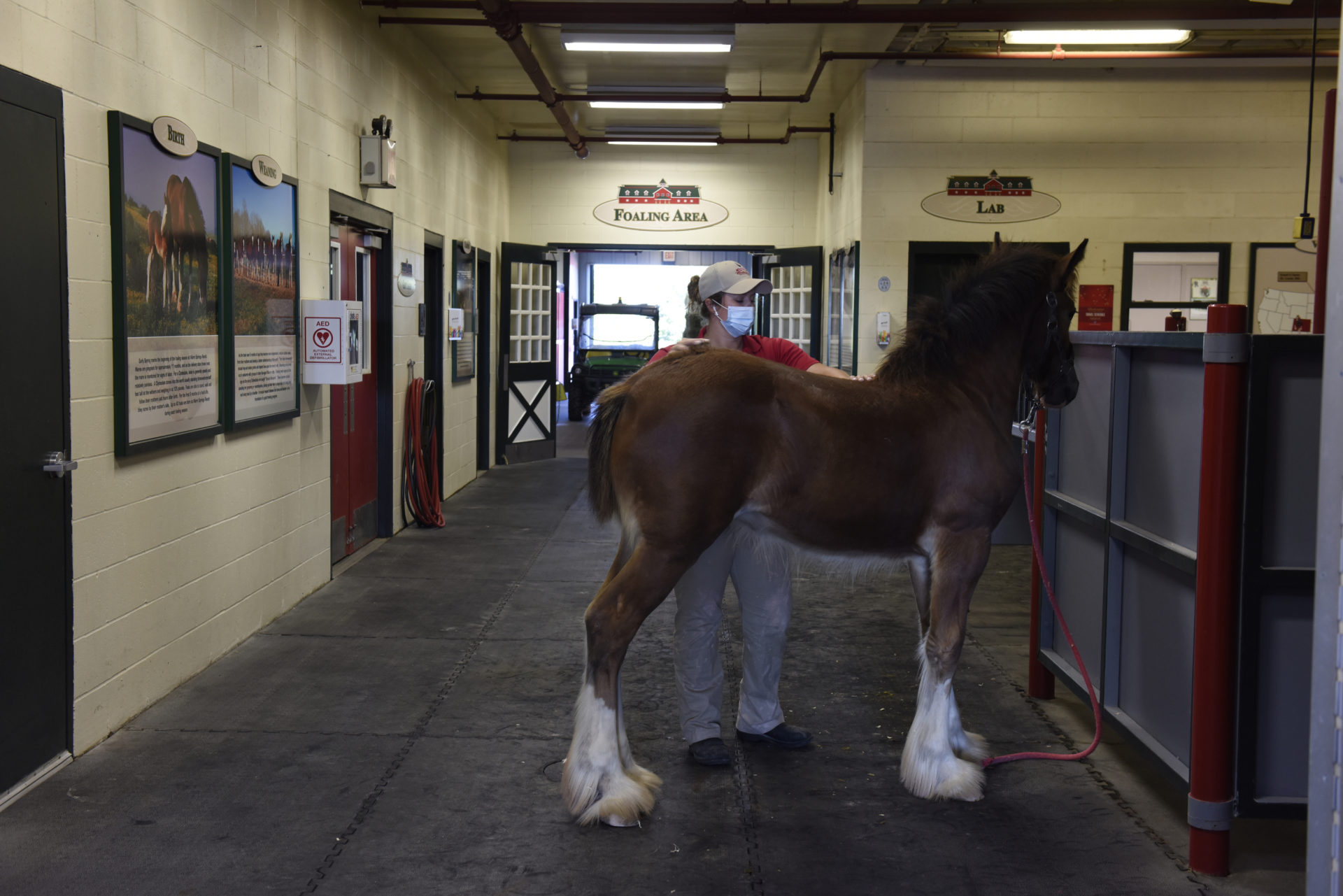 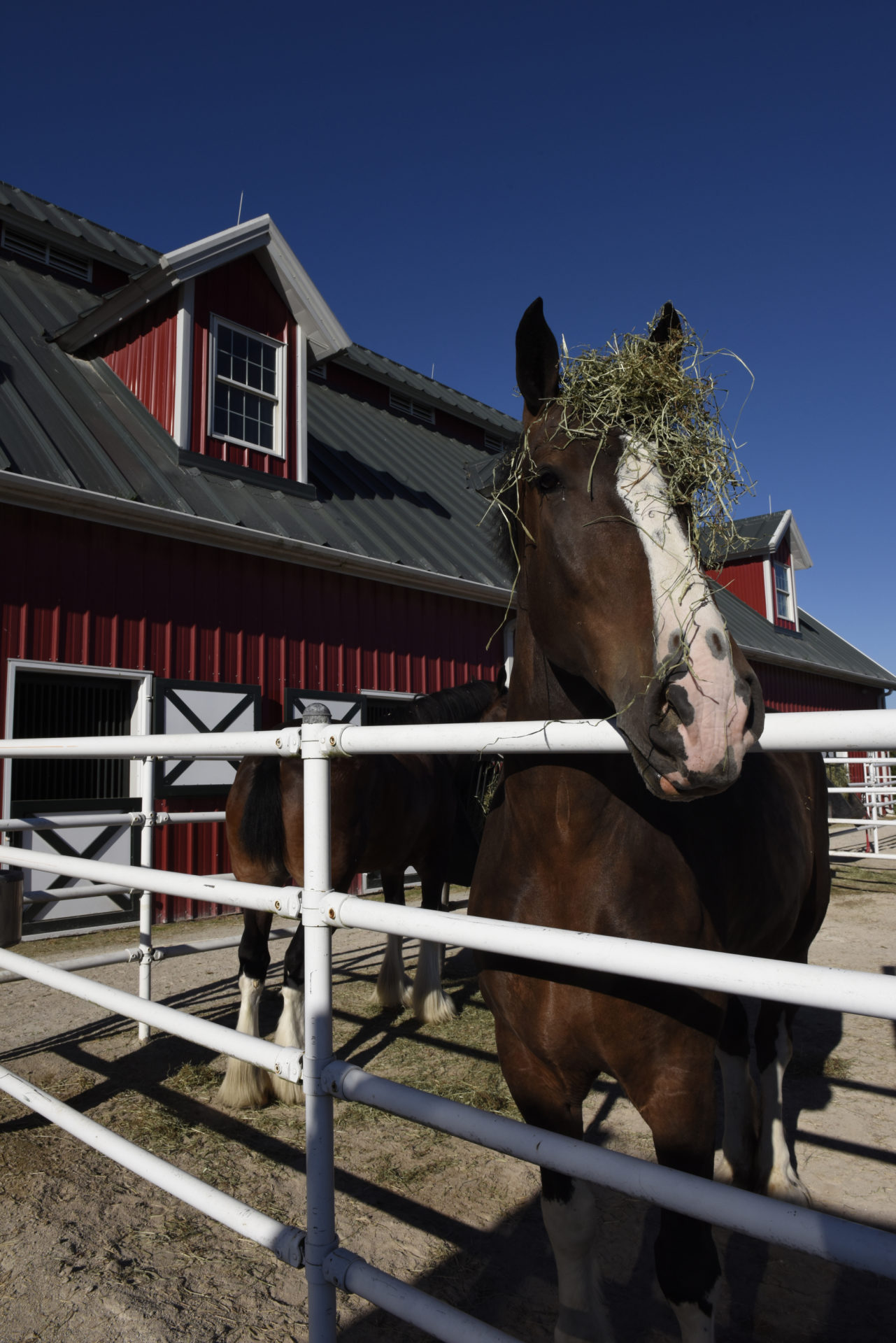 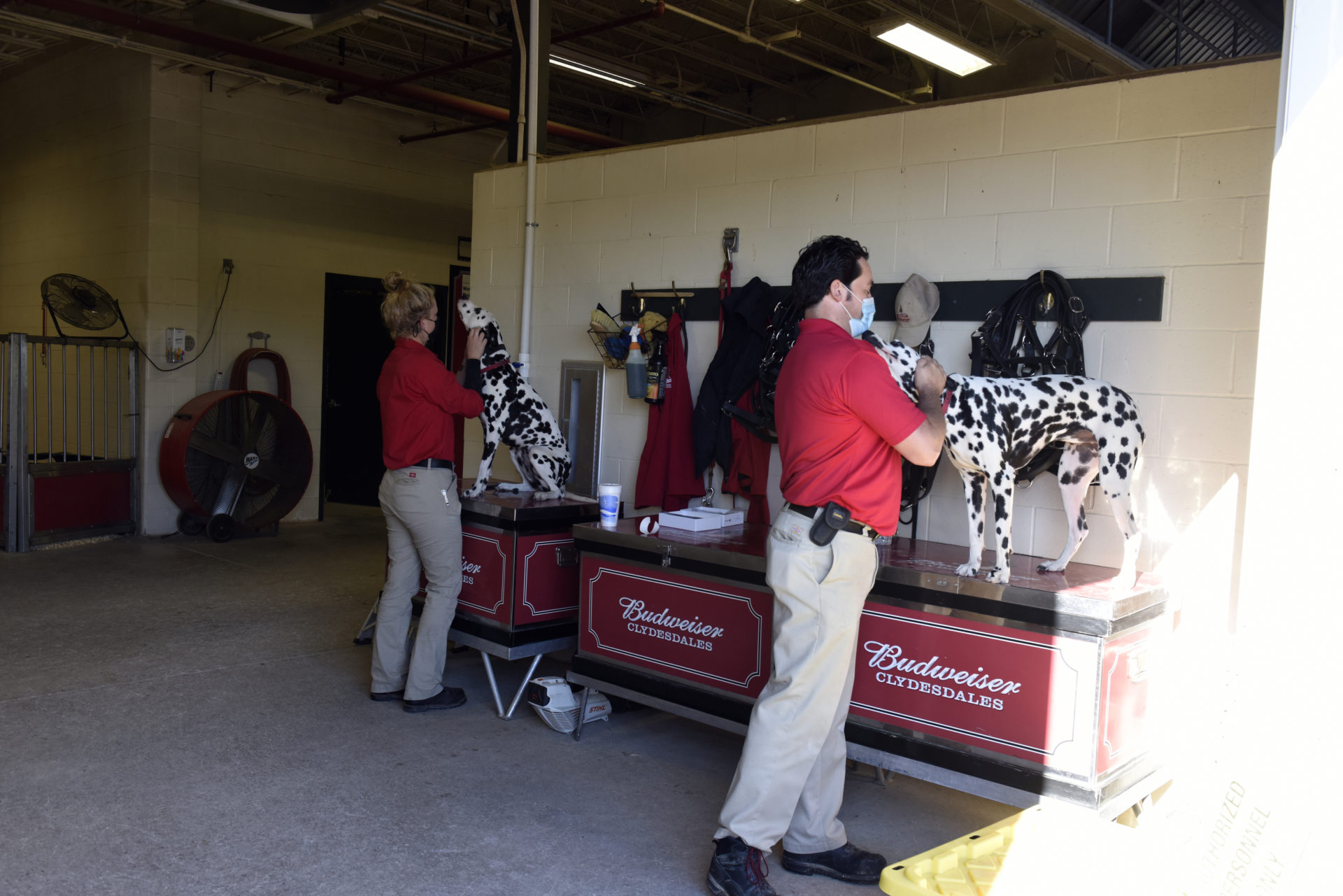 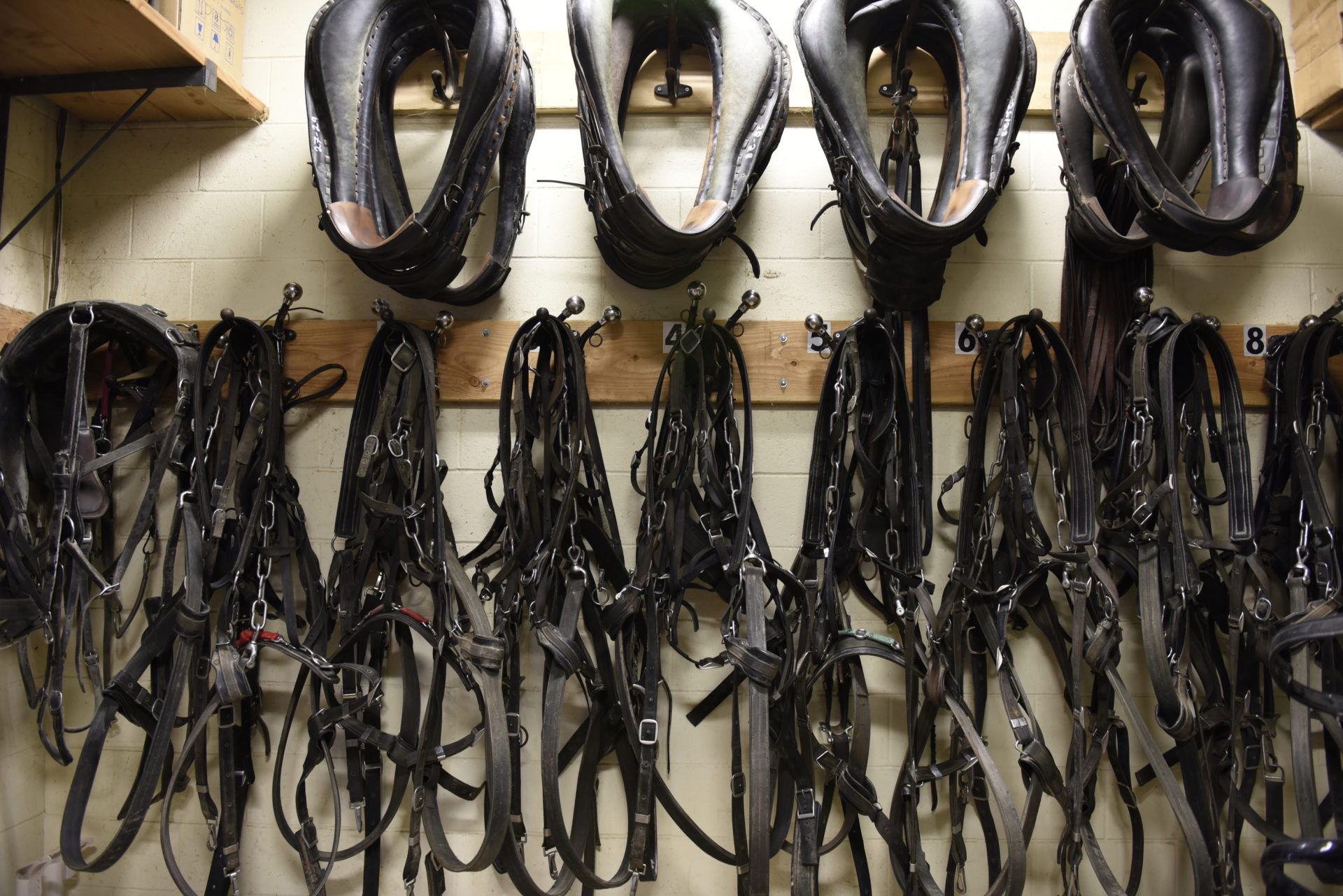 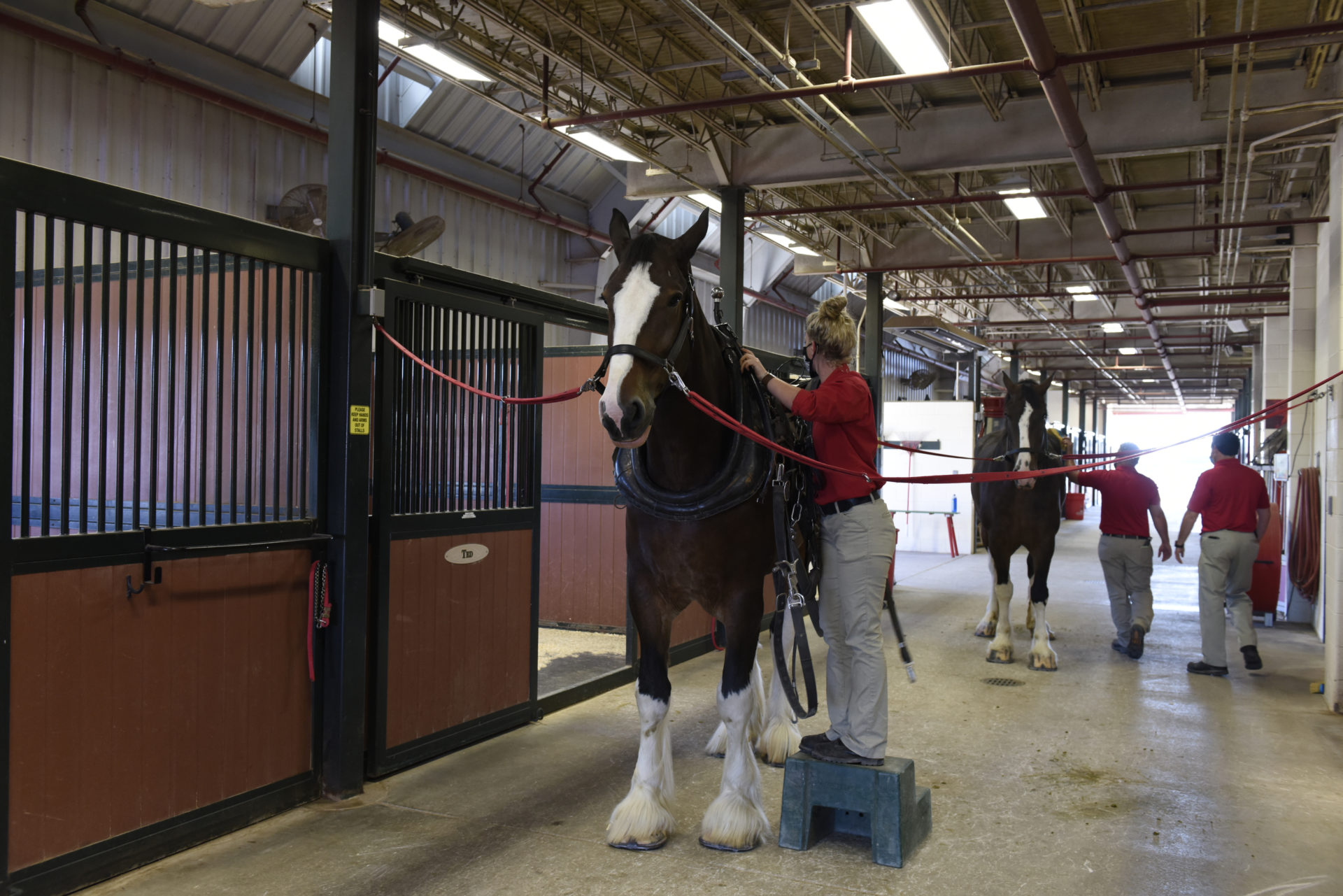 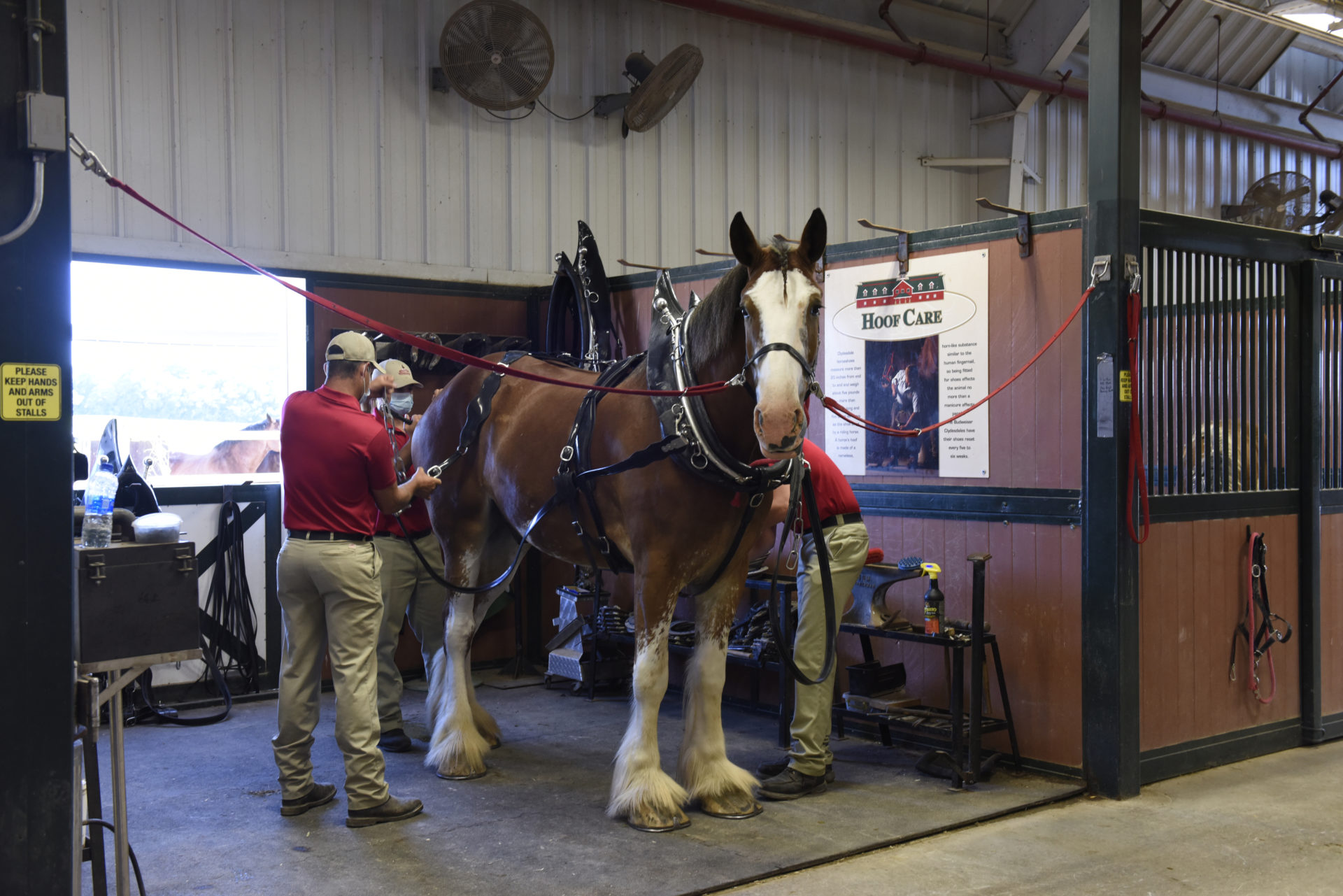 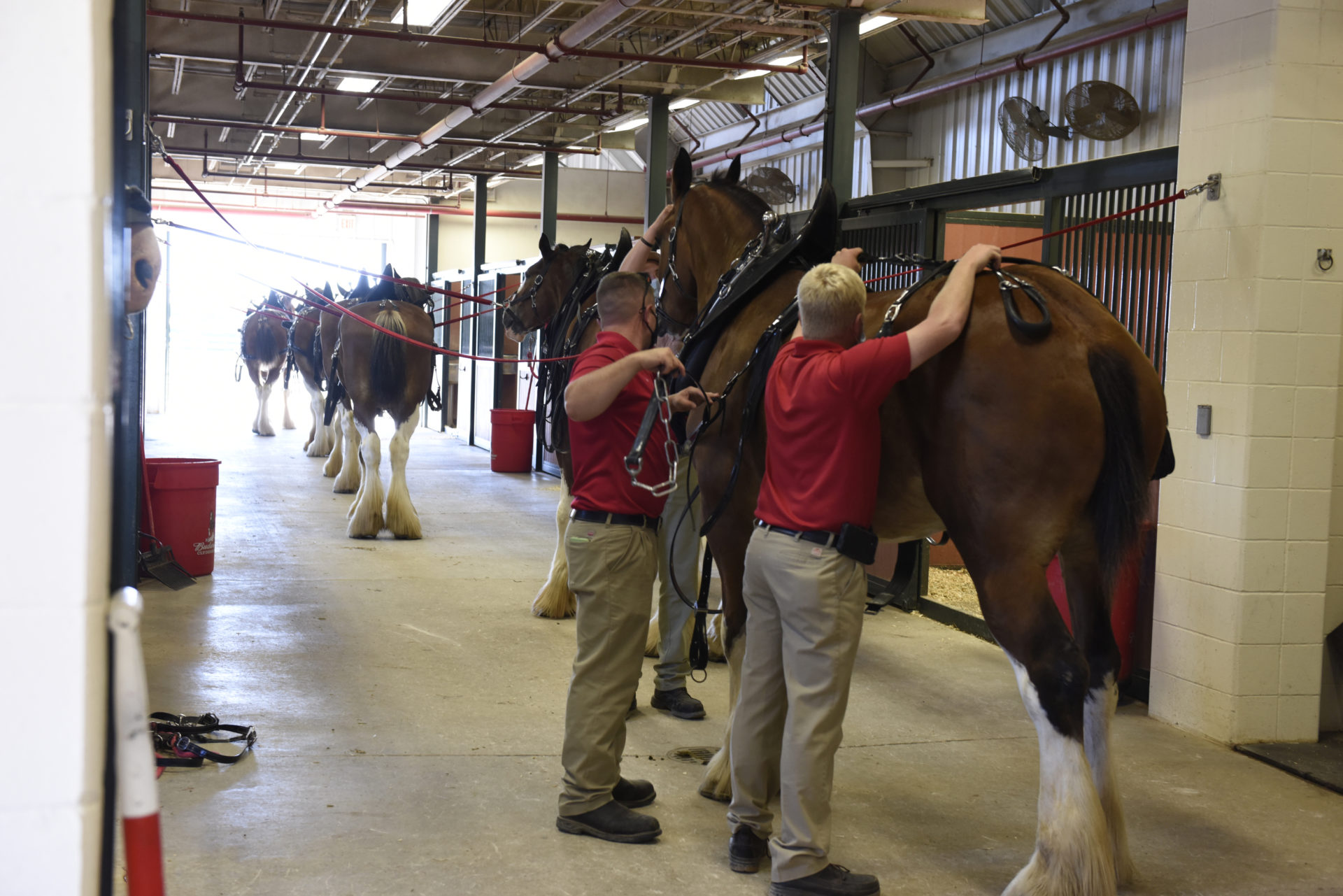 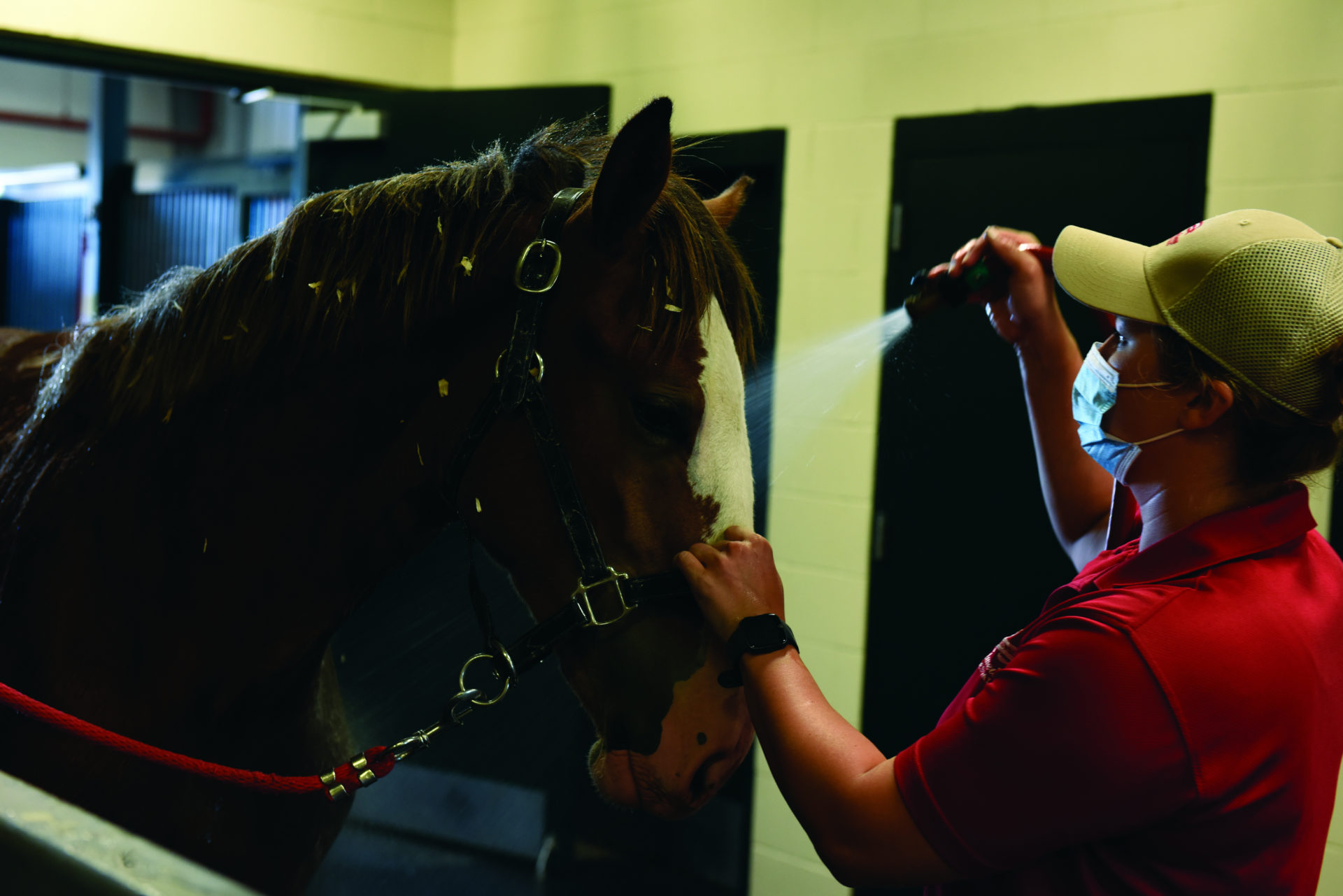 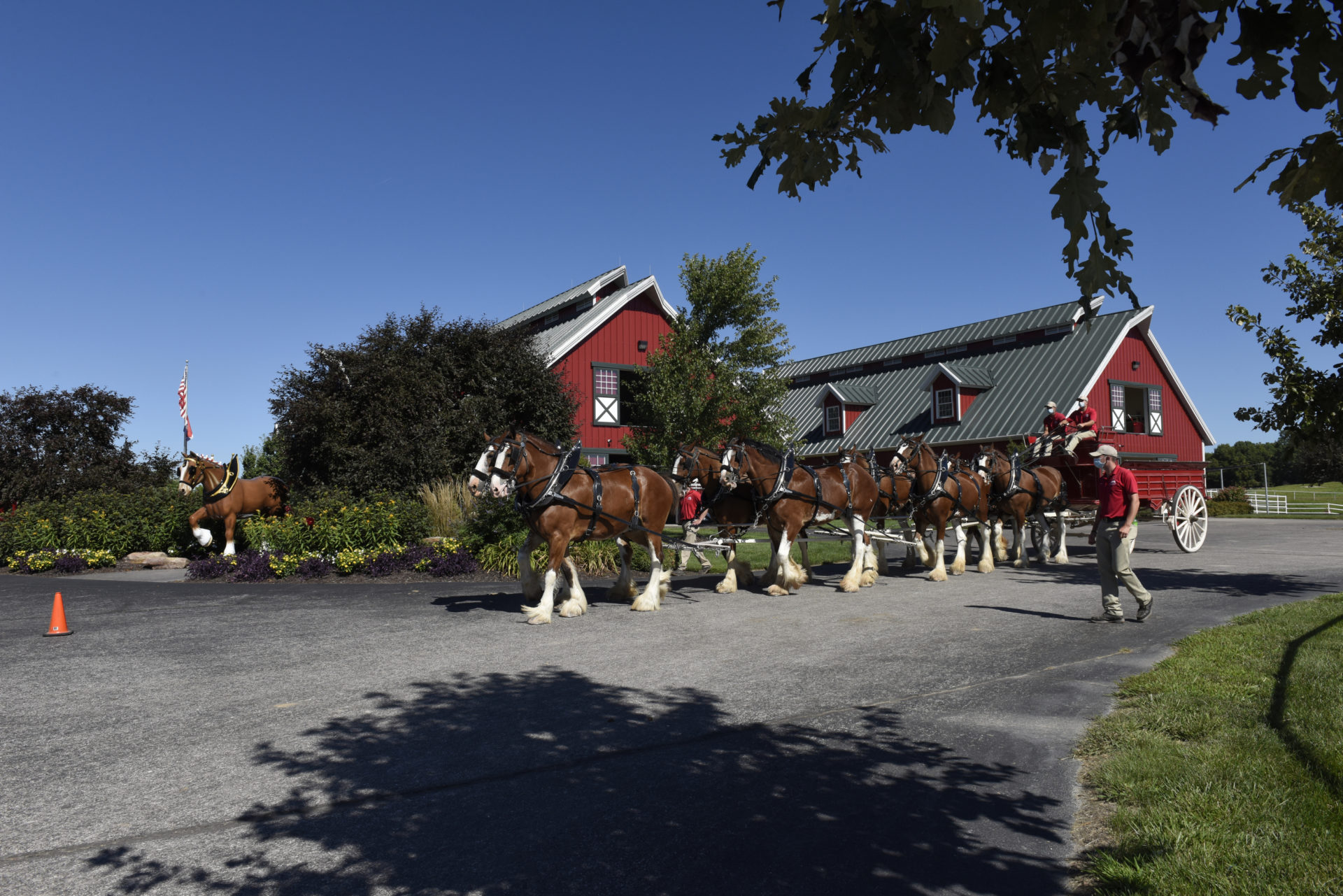 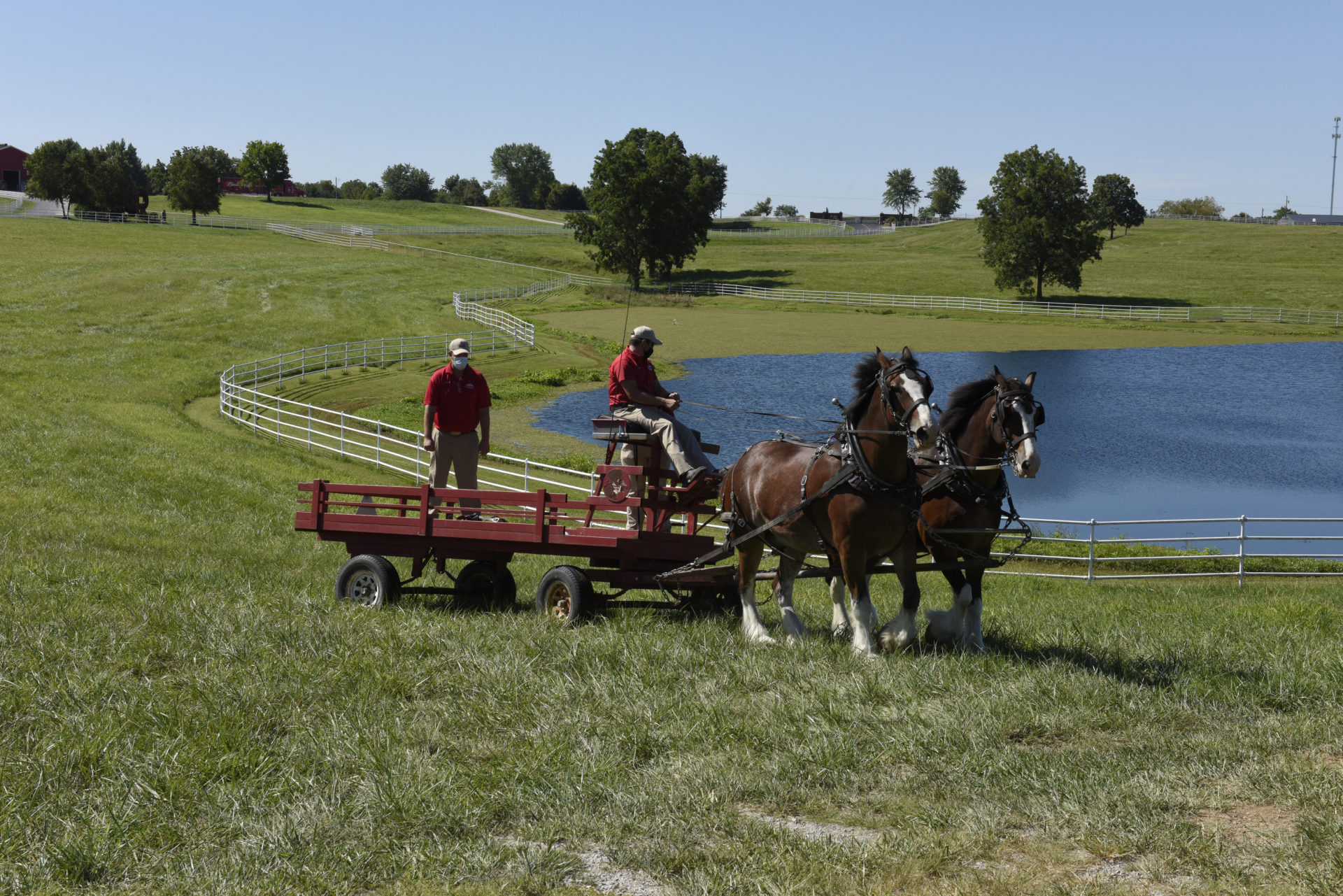 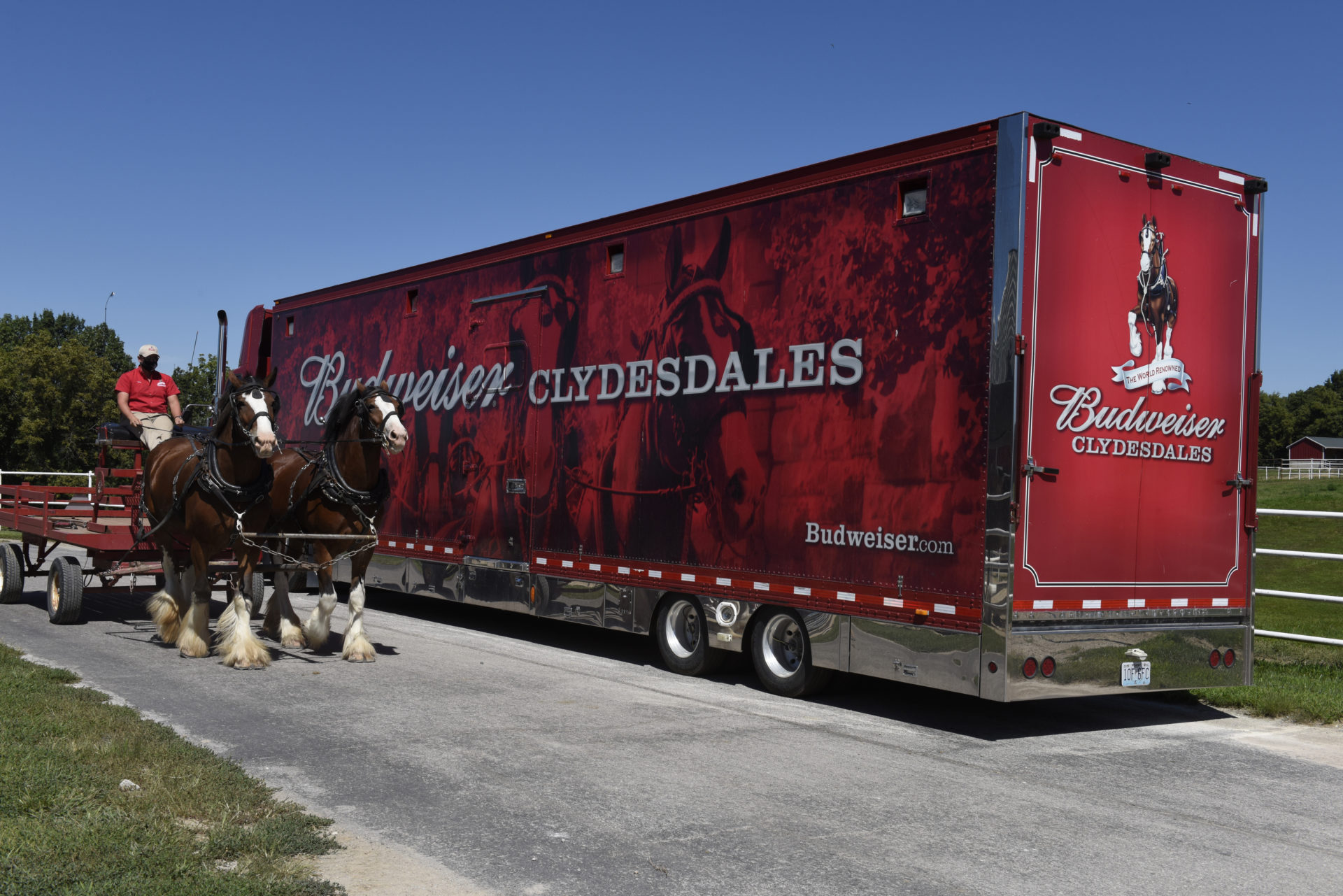 When the Clydesdale is officially ready, it is assigned to one of the hitches based in Colorado, New Hampshire or they stay at home with the Boonville team. In a normal year, the equine teams — known as the West Coast, East Coast and Midwest hitches — appear in up to 150 events across the United States, traveling 10 months every year. Since 1933, the Budweiser Clydesdales have covered nearly 2 million miles in their travels. In the process the big boys have worn out more than 56,000 custom-made horseshoes.

Driving a combined 12 tons of wagon and horsepower requires expert skill and physical strength, so the drivers are training for their positions while the hitches work on wagon pulling.

“There are 40 pounds of line held by a driver,” Mark says. “That plus the tension of a team of horses pulling creates a weight of around 75 pounds. The process to become a Budweiser Clydesdales hitch driver is as lengthy or longer than teaching the horses to pull.”

Mark says the best thing about his job is that the day-to-day stuff changes. “We have so many horses at so many different ages and stages in their training. It’s great to follow them through their entire cycle and see them develop.

“Every one of the horses has a different personality,” the herd supervisor notes. “I really don’t have a favorite because that would be like showing favorites among your kids. You love them all.”

Warm Springs Ranch is located at 25270 Highway 98 in Boonville. More than 50,000 guests visit the equine attraction in a normal year. Check www.warmspringsranch.com or follow them on Facebook for tour details or call 888-972-5933 for more information on when tours will begin again.