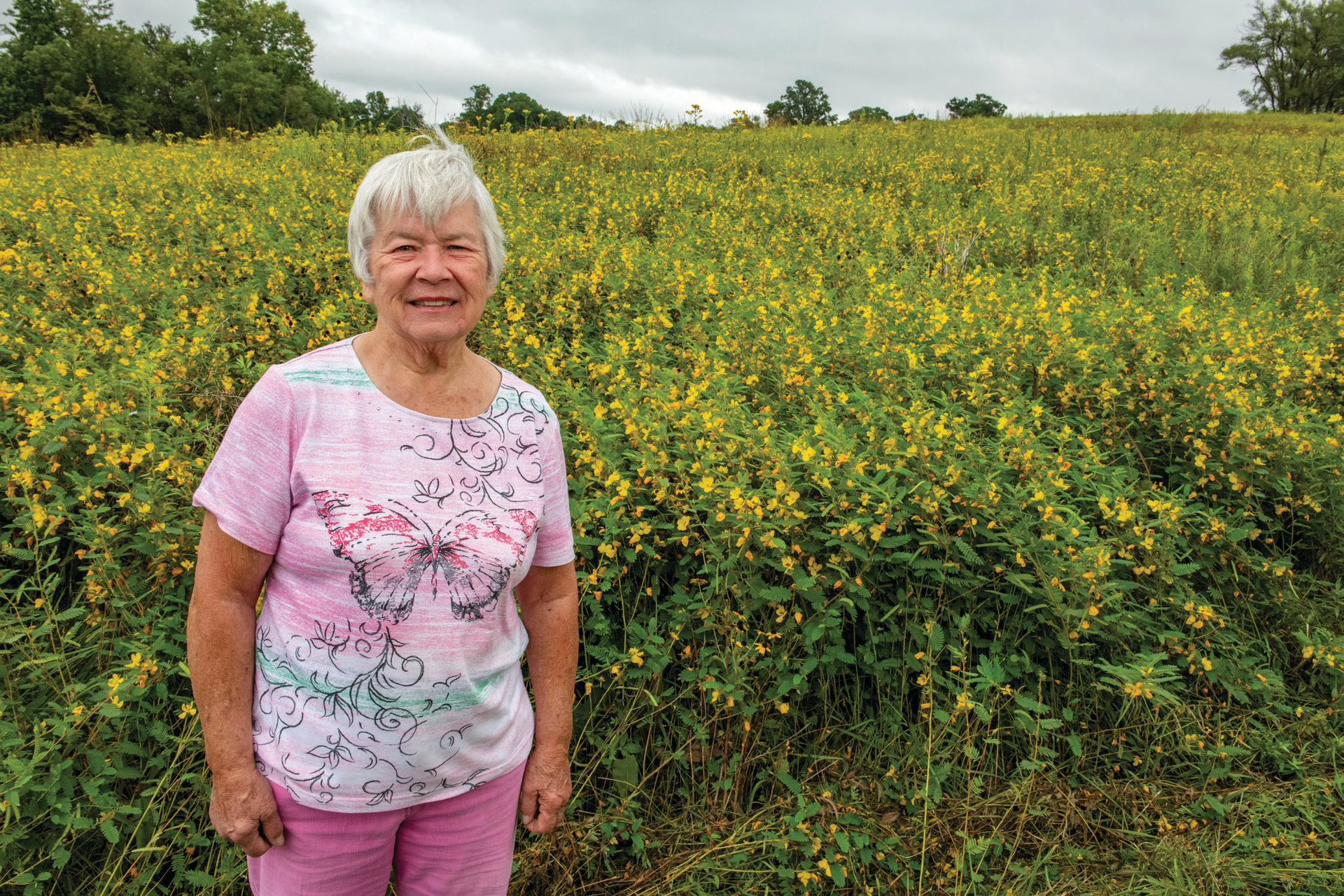 Linda Overton stands in a 30-acre pollinator plot of partridge peas and goldenrod she and her husband, Bob, established on their Grundy County farm.

Trees can do a lot to enhance property for landowners in the right conditions. For people, they provide shade and scenery, and for animals they provide food and habitat. Growing near power lines, however, overhanging limbs can mean big trouble for electricity, particularly in strong winds or heavy snows. As such, electric cooperatives have a duty to keep right-of-way free of trees and other vegetation that can damage lines and cause outages for members.

When the Missouri Department of Conservation gave a presentation on Wires Over Wildlife, also known as the WOW program, to Missouri’s co-op managers in 2019, Grundy Electric General Manager Scott Wilson was certainly wowed. He’d found something special that could keep the co-op and its members happy.

“What we see as troublesome vegetation, they see as valuable trees, and I think this is a good program to help bridge that gap,” Scott says. “Keep it wild with no big trees in it? We’re good with that.”

Under the program, MDC staff work with landowners to determine the goals they have for their property and develop a plan to improve the land for native plants and animals where power lines pass through an electric utility’s easement. Established in 2012, WOW plays a major role in building wildlife habitat, according to Community and Private Land Conservation Chief Jason Jensen.

“We work with landowners throughout the state, but it’s kind of a checkerboard approach,” Jason says. “They may be miles away from one another, but power line rights-of-way connect all those properties.”

Enter Linda and Bob Overton. The Grundy Electric Cooperative members are no strangers to conservation practices. When they returned to their hometown of Trenton upon retirement in 1998, the couple set to work restoring part of their 120-acre farm to native grasses, shrubs and trees. Every year, they diligently feed birds, help biology students with field studies and buy plants from MDC’s George O. White State Forest Nursery. When a neighbor’s 30-acre corn field came up for sale, the Overtons bought it and converted the cropland to a pollinator paradise of native plants. Linda’s desire to restore the farm stems from an affinity for the outdoor traditions of rural living: camping, hunting, fishing and learning the land.

“And we wanted a place for our grandchildren and our kids,” Linda adds. “You want them to have a place like you did, where they can do what they like doing. I think it’s in your blood.”

When Grundy performed regular maintenance on the right-of-way at the Overton’s farm this year, Linda’s wheels were already turning on what could be done with the easement. Now it was Scott’s turn to “wow” the members with a solution. As a result, the Overtons will be the first electric co-op members in the state to participate in the program.

Jason hopes they will have planted the first of many seeds that will grow WOW across the Show-Me State.

“Ninety-three percent of the state is owned by private landowners,” Jason says. “So, if we’re going to be successful managing the forests, fish and wildlife in the state of Missouri, we’re going to have to have their help.”

Different practices are eligible for cost share through the program, with Grundy Electric and the landowner splitting the cost. In the Overtons’ case, the 1.5 acre easement will be planted in a pollinator mix, including 30 forbs and two warm-season native grasses. The primary focus of WOW is on establishing native plant habitat, but Jason says other landowners may have an eye toward establishing food plots for deer or woody cover control and edge feathering to benefit rabbits and quail.

“From the right-of-way perspective, you ultimately want that area open, and that’s an opportunity whether we’re talking small game habitat or pollinator habitat for monarch butterflies,” Jason says. “If it meets the landowner’s goals and the co-op’s goals, that’s eligible for the program.”

Landowners are required to maintain their new landscape for 10 years, which allows the co-op to extend or, ideally, completely remove that portion of line from the maintenance cycle, thus saving members’ money on labor, equipment and other expenses in the long run.

“We try to maintain a five- or six-year rotation with our vegetation management program, and some of that involves chemical application in addition to mechanical trimming,” Scott says. “For folks who raise bees or do all-natural farming and don’t like herbicides applied around their properties, this would benefit them as well.”

With the Overtons acting as a sort of pilot program, Scott is confident the experience will provide answers to the co-op, their members and MDC as to how the program will work in rural areas. And when their property greens up next year, Linda and Bob will be another step closer to their goal of rural bliss.

“We moved out here to be in the country,” Linda says. “I don’t want to see things go extinct, whether it’s plants or animals, and you might as well have something you can enjoy that also helps out bees or butterflies.”

Grundy Electric Cooperative members interested in the WOW program can contact the co-op at 1-800-279-2249. Landowners in the service area can contact MDC Private Land Conservationist Scott Roy at scott.roy@mdc.mo.gov.