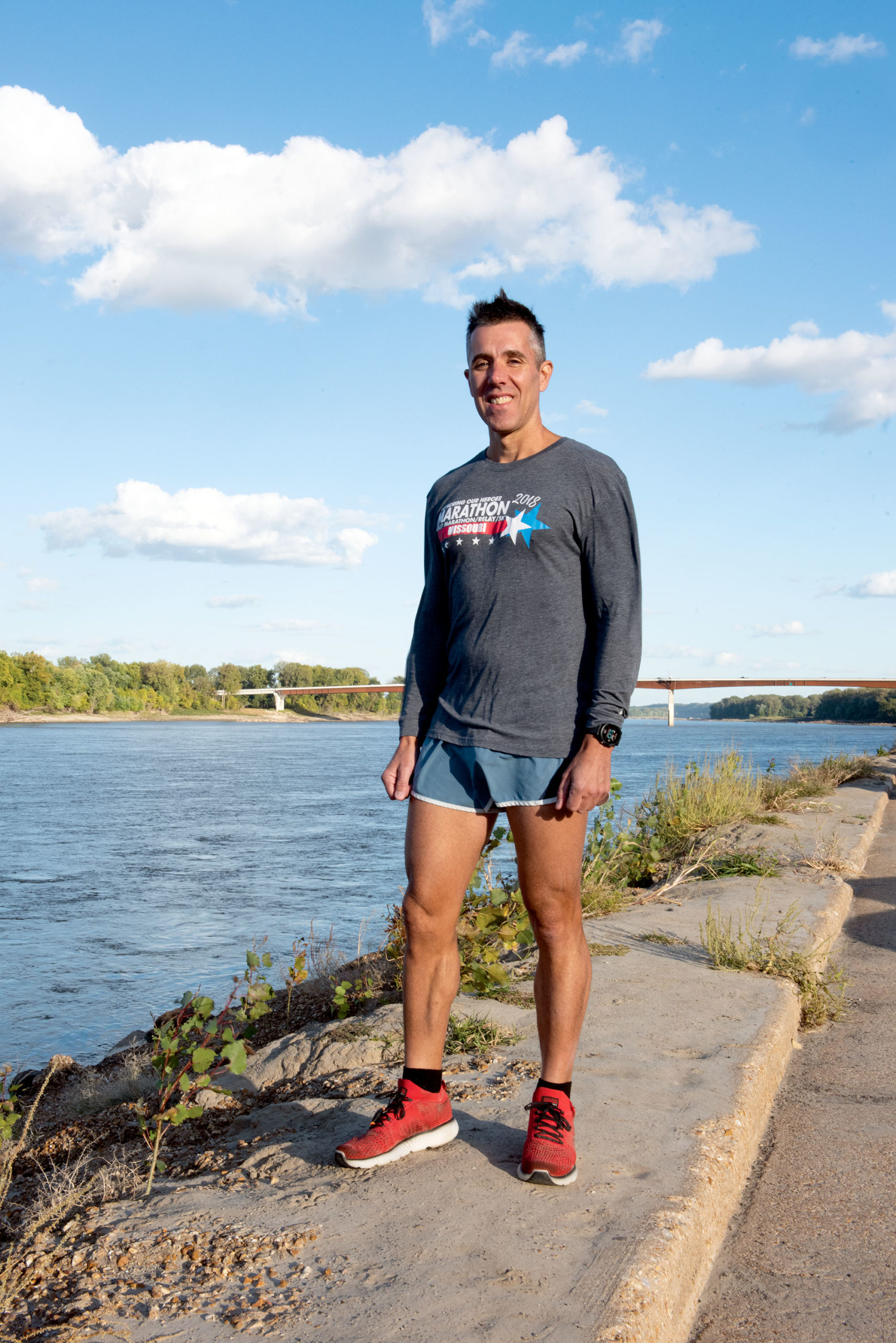 There’s a certain progression most runners go through. They start with a 5K, and if that goes well, move up to a 10K or even a half-marathon. The pinnacle is reached by running a marathon, 26.2 miles of bragging rights for anyone willing to do the work.

Washington’s John Cash skipped a few steps. He jumped feet first into the world of ultrarunning. Make that competitive ultrarunning.

Technically, an ultra is any race over marathon distance. Typical races are 50K, 50 miles or even 100 miles. Mere mortals have slogged through every distance, with some satisfied just to be on their feet at the finish.

“I did an ultra before I even knew what one was,” John says.

The race was the Brew to Brew 44-miler connecting two breweries in the Kansas City area. John jumped in on a whim, unprepared for the distance.

“My longest training run was 16 miles,” he says. “The race took me 7 hours. It was so terrible I swore I would never do it again. But once I started training those distances came easier.”

John goes into everything he does with a singular purpose. “I want to win,” he says. “I’m a competitor. I’ll be the first one to shake the winner’s hand if I’m not first. But at the same time, I’m trying to beat them if I can.”

Unlike countless other runners, John passed on track and cross country in high school even though he showed promise as a miler. Instead he opted for basketball and baseball because he thought they were more fun. Graduation brought on a mild case of depression, he says, due to a deep competitive desire he couldn’t shake.

He raced cars, mountain bikes and motorcycles. He played softball. He entered increasingly more difficult triathlons, including an Ironman in Louisville. He dabbled with competitive bodybuilding. But none of these scratched the itch he felt for extreme competition.

Then a friend introduced John to the St. Louis Ultrarunners Group. He joined the SLUGs on one of their 20-mile “fun” runs along the challenging Green Rock Trail in St. Louis County. After that John parked his bike in the basement and did nothing but run for the next two years. “I ran every day,” John recalls. “I went to the trails all the time. I had so much fun. I started running the trails like a crazy person.” 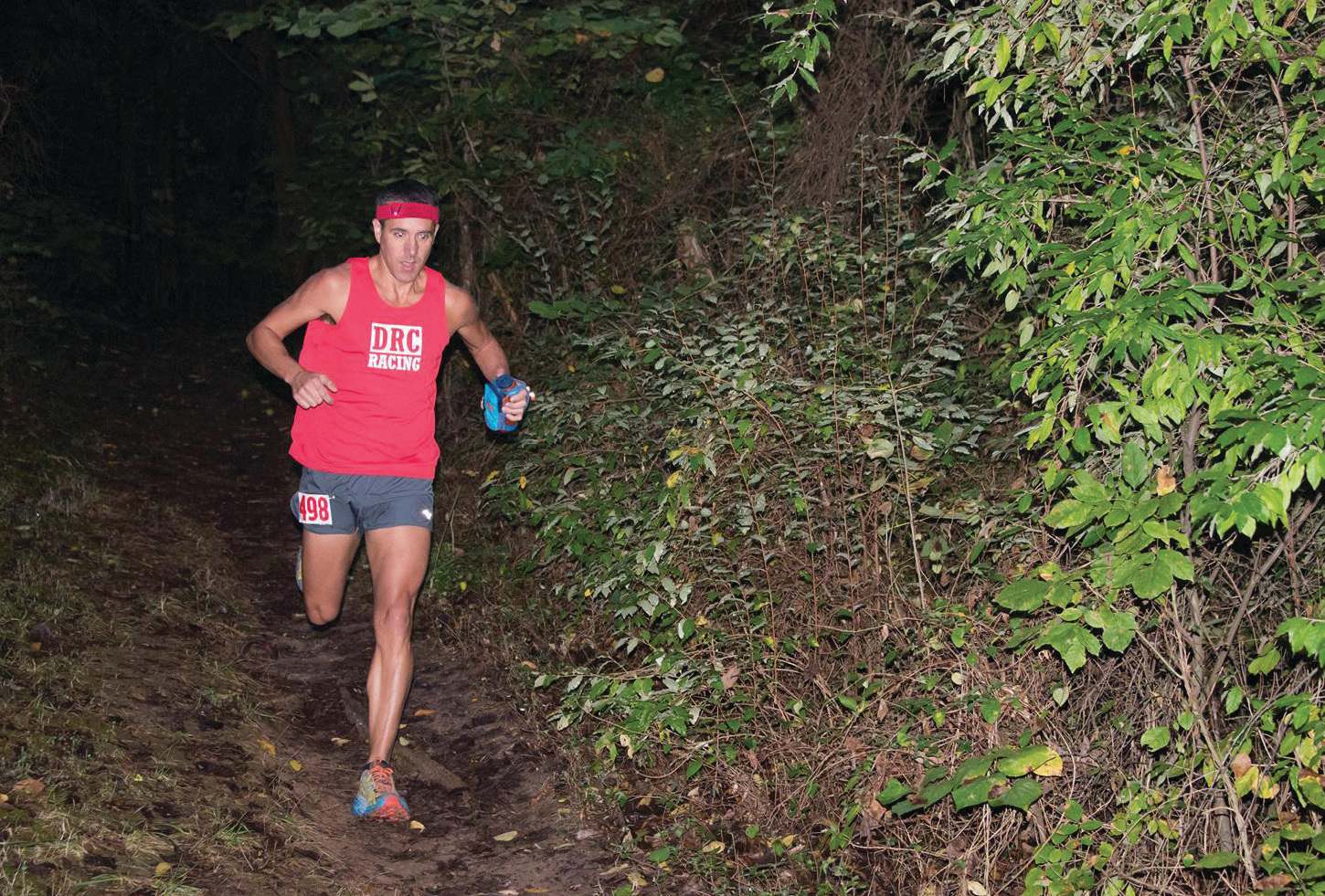 John speeds toward the finish during the Rockbridge Revenge 50K, which he won in 4 hours and 34 minutes.

Skipping the usual progression, John started out running trail ultras. His first attempt at 100 miles was on the Ozark Trail, home to a race held annually in November. Growing up near Salem, John spent a lot of time in the Ozarks and felt right at home here. His time was just under 24 hours for the 2010 race, good for sixth place. He ran the tough race — which features 15,000 feet of elevation change — three times, finishing as high as third place.

He jumped into the Mark Twain 100-miler, a four-lap race held on the Berryman Trail, and set a course record. Then he found a new passion. “I was new to ultras,” John recalls. “I was running trails. Then a friend did a 24-hour race and did 115 miles. I was in awe. I was curious how far I could run.”

He switched his training to the roads and entered his first 24-hour race. The goal here is to see how many miles can be completed in the time limit. John managed 130 miles, stopping two hours early but still winning the race.

That distance peaked at 154.6 miles as John won the Desert Solstice 24-hour in Arizona. He qualified twice for the U.S. National 24-hour team and competed in the International Association of Ultrarunners 24 Hour Endurance Championship in Turin, Italy — at 42.

Ultrarunning has taken John across the country, competing in a wide variety of distance events. For a time, he was competing in 10 to 12 ultras a year, with two at the 100-mile distance. He set five course records and won 42 trophies in 58 races. All were tough, but John says the biggest sufferfest was the Vol State 500K. This race involved running across Tennessee — roughly 314 miles — in July.

For three days and 6 hours, John pounded the pavement. He slept a total of just 5 hours, mostly less than 30 minutes at a time on a roadside mat. John lost most of the skin off the bottom of his feet but continued to run to a second-place finish, despite stopping to change a flat tire for an elderly couple he met at the 200-mile mark. It took a new course record to beat him.

As if all of that wasn’t enough, John found new ways to test his mettle during 2020. He ended 2019 with the fastest 100 miles during the Dreadmill 48 Hour Endurance Challenge. John needed two treadmills to complete this one.

He repeated the performance in April for the Quarantine Backyard Ultra, running 163 miles in 39 hours. He did another Backyard Ultra in May, this time on a treadmill. Then, as COVID-19 shut down the country, he embarked on a bucket list adventure that saw him run across Missouri on Route 66 — pushing a stroller holding food, drinks and spare clothes for 337 miles over four days, 15 hours and 47 minutes.

“It was a great adventure,” John says. “I had a blast. It was just me and I had to rely on myself for everything. That’s exciting.”

John attempted another cross-state run a month later on the Katy Trail. He was shooting for the fastest known time and was on pace for that honor when his 46-year-old body gave out. Facing possible kidney failure, he opted to end the run.

The wake-up call has John reassessing his priorities. He’s training for another Ironman triathlon. But as he speculates on future adventures a gleam enters his eye.

“I recommend for anybody, whether it’s biking, running or whatever your choice of the adventure might be, get out there and see some stuff. Empower yourself on the road. Do your adventure and I think you will just be better for it.”

John and his wife, Meghan, are hosting the 6- and 12-hour LX3 timed race in Washington on April 24, 2021. It’s a good intro for someone wanting to run far. For more details visit www.facebook.com/themeangoose.