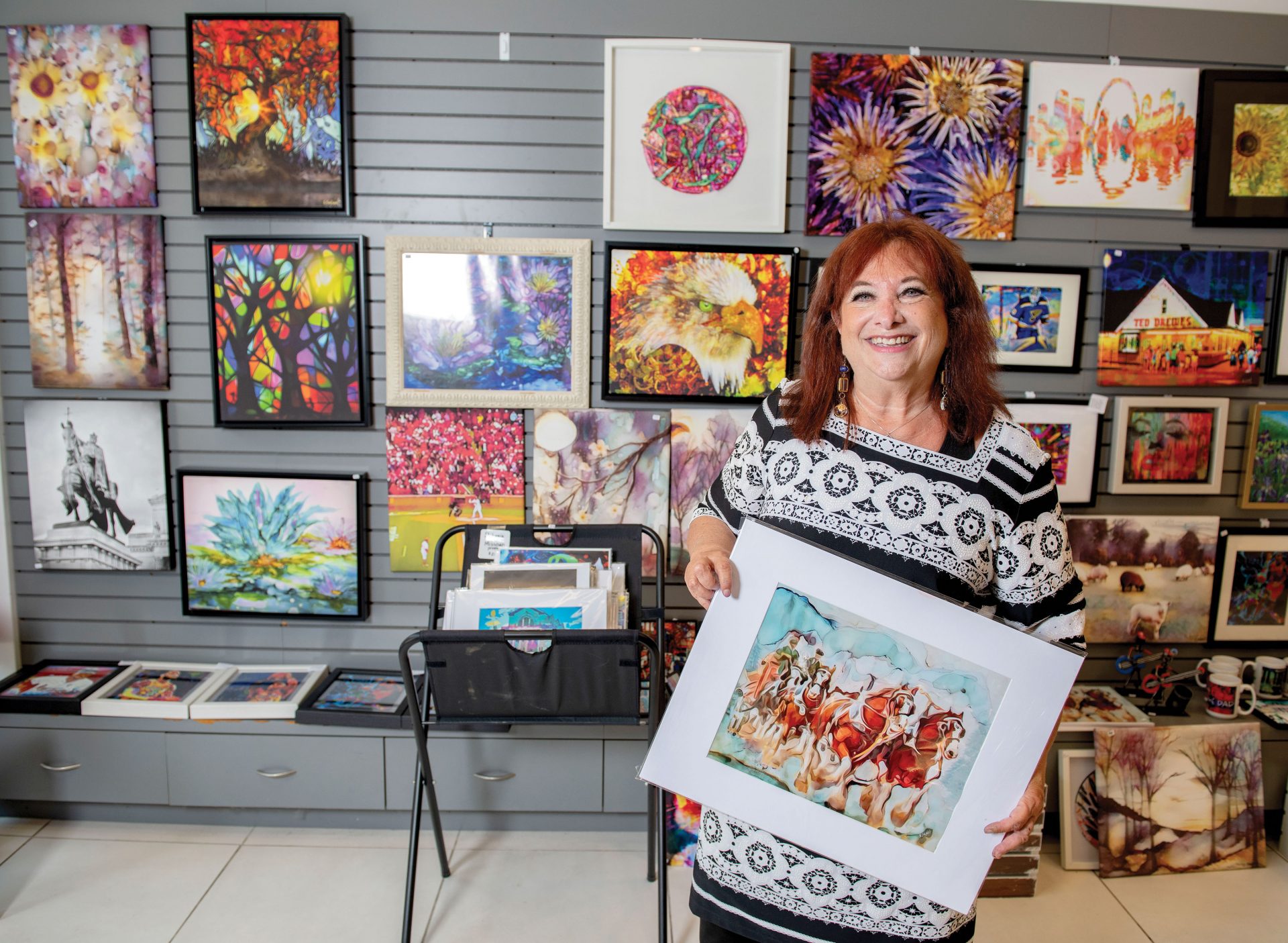 Sherry Salant had a mystery to solve. The recently retired educator was attending a show in St. Louis about a decade ago when a piece of art from one of the vendors caught her eye. “It was so cool. It looked like stained glass, not like paint,” she says. “I stopped and asked her what she was doing and she wouldn’t tell me.”

Sherry put on her journalist hat from her time at the University of Missouri School of Journalism and found the artist’s name and began researching. “There was this obscure article from a few years prior that had been written about her,” Sherry says. “I saw the two words ‘alcohol ink’ in the story. I had never heard about it.”

A decade later, organic alcohol ink is Sherry’s primary medium. The Lake Saint Louis artist’s paintings cover the walls at her gallery, H-art and Soul, in the St. Louis Premium Outlet in Chesterfield.

Art runs deep in Sherry’s family. Her grandfather was a sculptor and her mother was a docent at the Saint Louis Art Museum. Her father was an avid art collector and would bring Sherry and her sister to New York with him a few times a year where they would be immersed in the arts.

“He was good friends with Thomas Hart Benton and in the late 1960s, my sister and I actually stayed with Benton and his wife at their home in Kansas City, which is now a state historic site,” Sherry says. “I was more drawn to photography at the time, so I would take my Kodak Brownie camera around with me everywhere.”

Sherry had recently retired from a 27-year career as a high school journalism teacher when she found alcohol ink. She had been taking plenty of in-person and YouTube classes to learn more about fine art, but the style was new. Bound and determined to learn more, Sherry ventured out to the normal big-box stores in search of the ink.

“They all said they had never heard of it and didn’t have any,” she says. “Turns out they all did, just in their scrapbooking department, not in the fine art supplies.”

Sherry was able to find one book on alcohol ink, but not much else online. She bought the products and began learning through trial and error. “It’s a Catch-22 because if lots of people are painting in that style, they can teach you what to do,” the Cuivre River Electric Cooperative member says. “But the good thing is if hardly anyone’s doing it, you get to create your own style, and that’s what I did.” 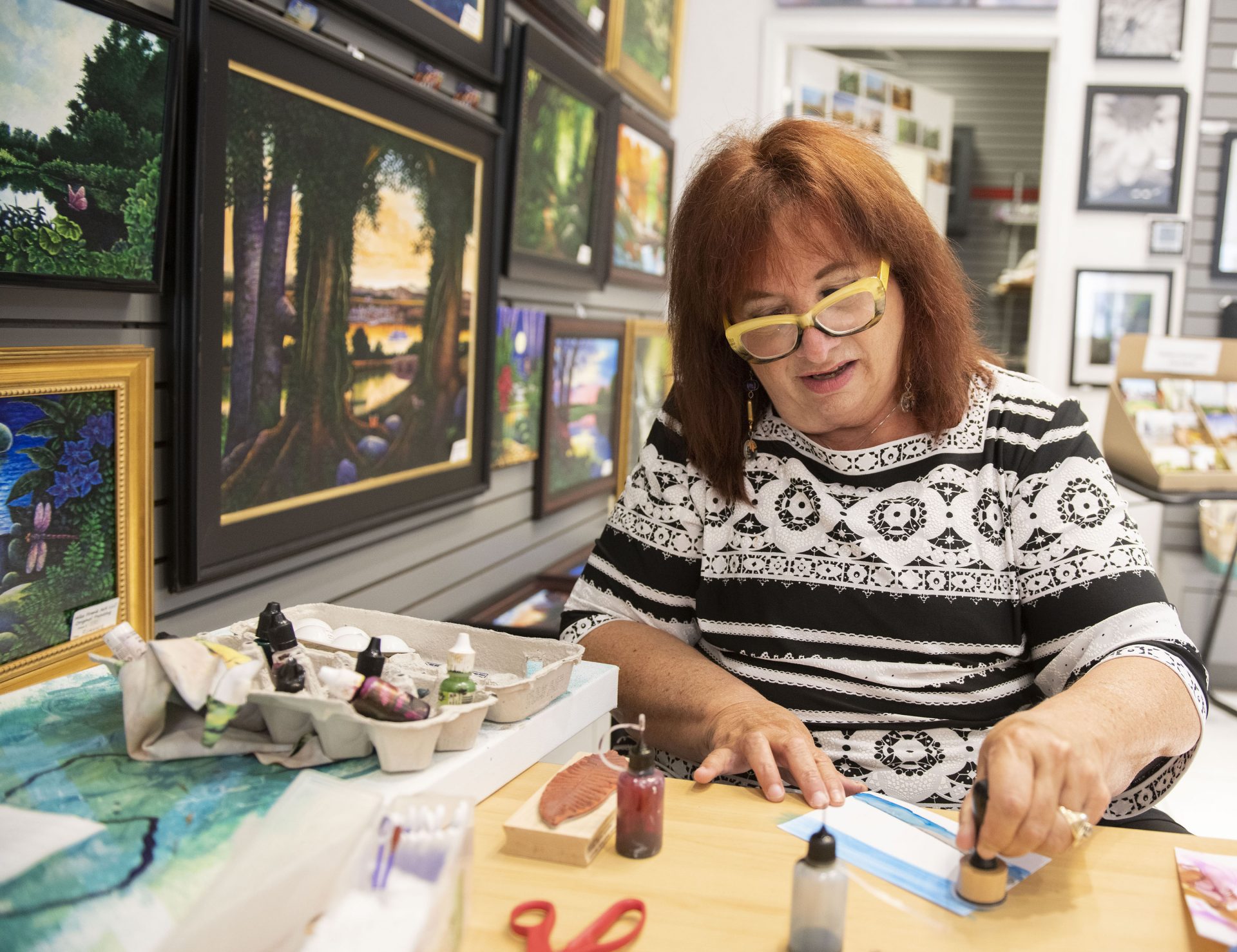 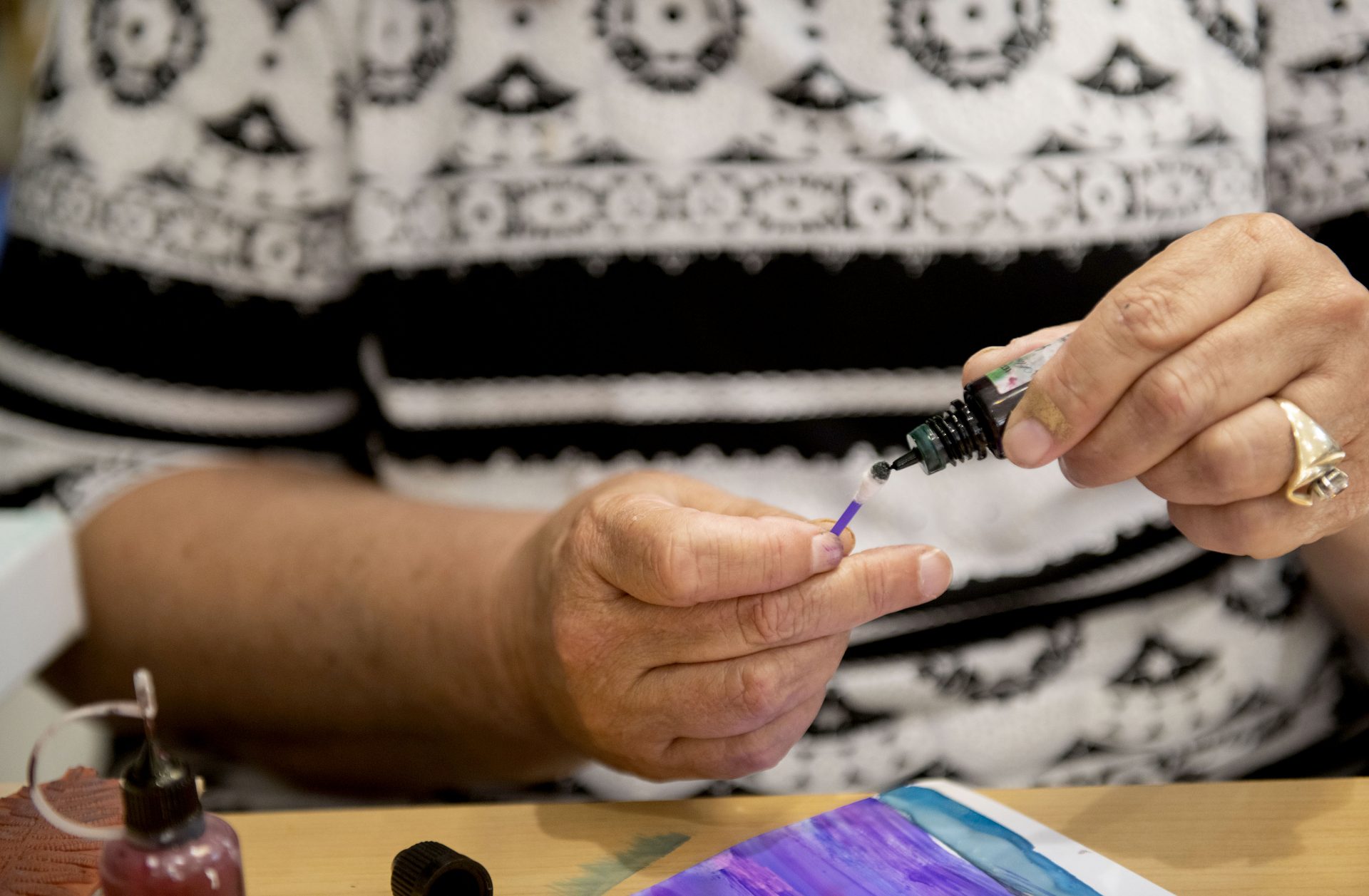 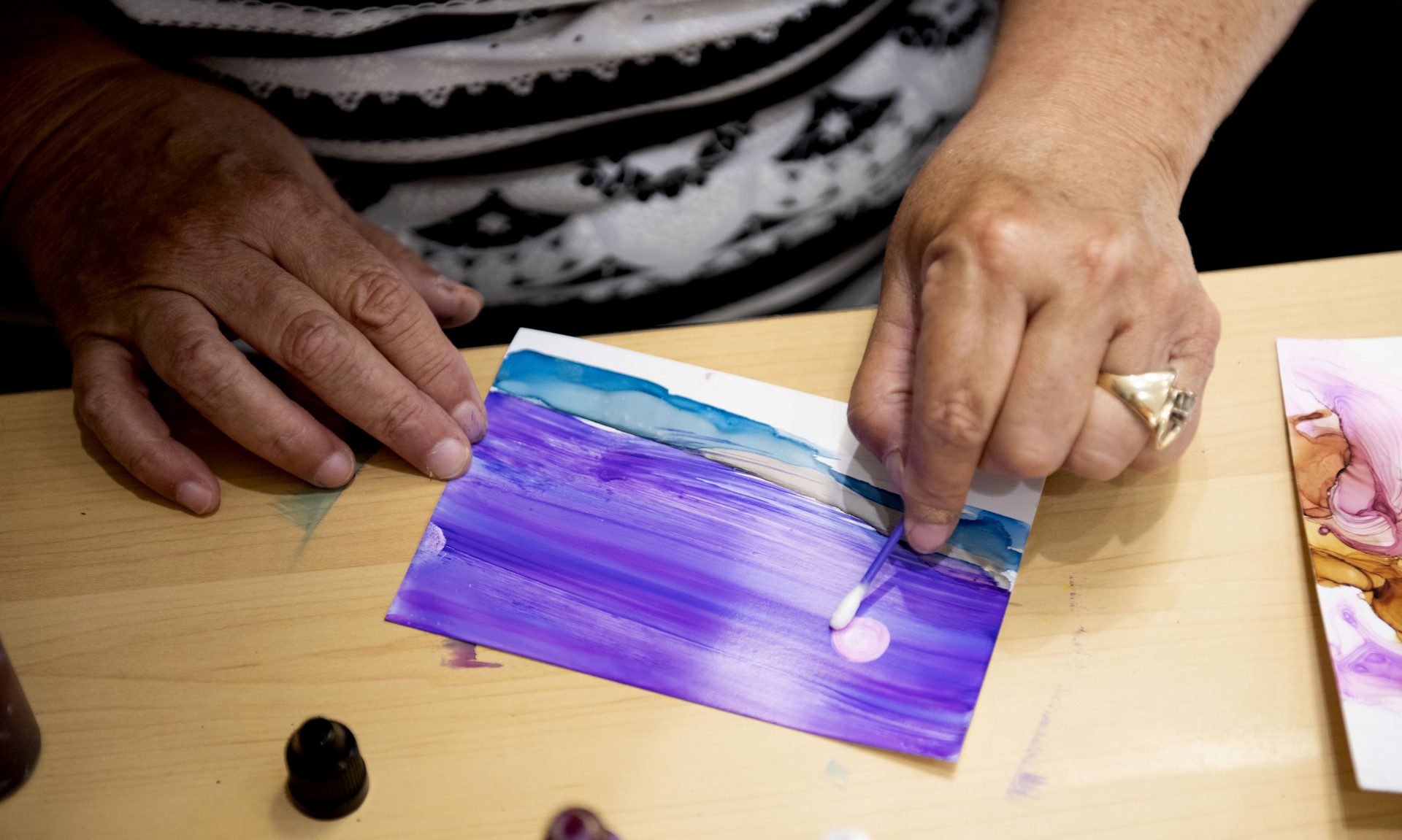 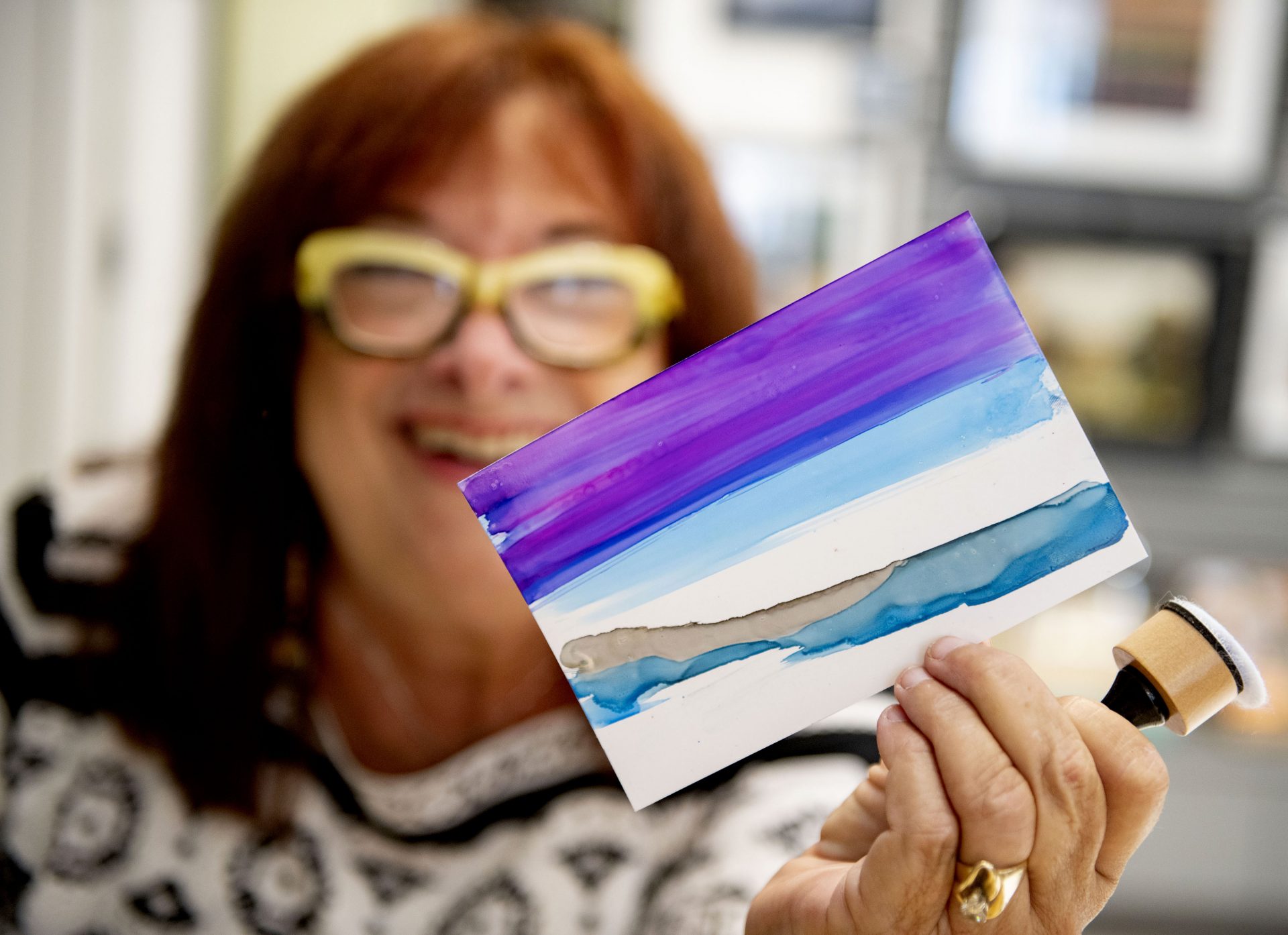 The ink for the paintings is mixed with rubbing alcohol that is at least 91% concentrated to create the alcohol ink. Instead of being applied to the canvas with a brush, it is instead dripped down onto a flat surface. The ink is fluid and does not stay where it lands, ensuring artists won’t have much luck penciling out their painting first.

The free-flowing ink dries fast so the artist must work quickly. As Sherry drips different colors of ink onto canvas, she might lift the canvas up to move the ink around. She uses tools such as brushes, cotton swabs, stencils or stampers to have the desired manipulation of what she’s painting. If she wants a sunburst effect on a part of the painting, she’ll pull out a straw and blow straight down on the area, instantly transforming the color spot to a shining sun. Air compressors, canned air and more are also used to get the perfect finished product.

Sherry has plenty of her art on display at H-art and Soul, including many paintings of St. Louis landmarks such as the Gateway Arch, Fabulous Fox Theater and Saint Louis Zoo. She also showcases her photography, scarves, rocks and other pieces on-site along with works by a handful of other Missouri artists. Her art is part of the Buy Missouri program as well. Sherry doesn’t do a lot of painting when she’s in the gallery, instead opting to chat with her visitors.

“I’ve been a storyteller my whole life,” she says. “And the thing that clicked with me the most is the story that is the connection between the artist and piece of art. When someone comes in and looks at a piece, I can tell them why I painted it the way I did. Why the title is what it is. What’s the inspiration I had for that painting. And it makes a big difference, more people find a connection to art because of the stories.”

For more information on Sherry, her art or her studio, visit www.sherrysalant.com or www.h-artandsoul.com.

This is one of the nearly 500 Missouri companies that are part of the Buy Missouri initiative overseen by Lt. Gov. Mike Kehoe. To find Missouri-made products or to enroll your business in the program visit www.BuyMissouri.net.