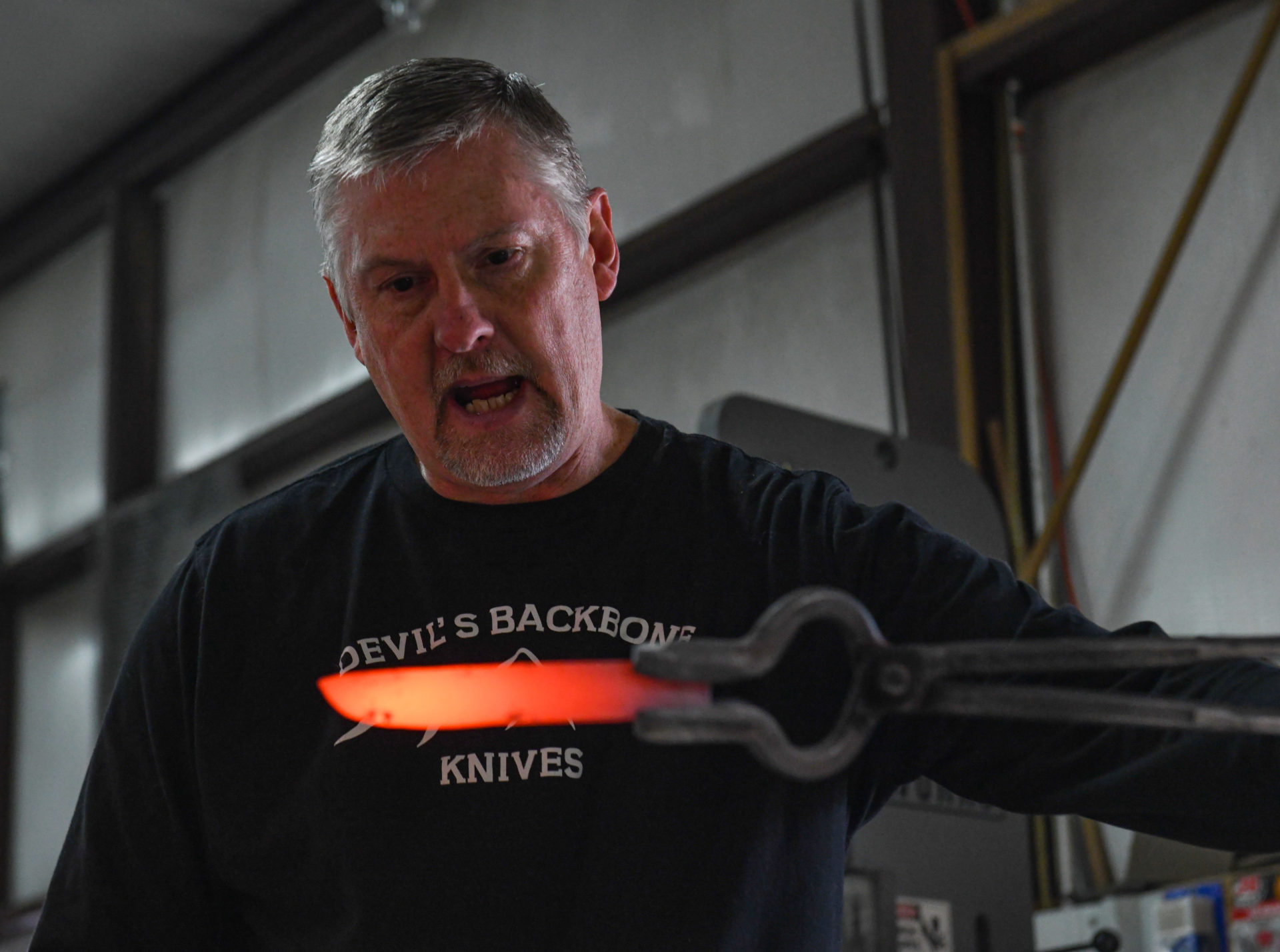 Personal challenges rarely manifest as a literal trial by fire, but that was the case for Bobby Walker. Just as a blacksmith brings metal to life in flames, the hobbyist knifemaker found himself forging a new path when the Sears service center he managed closed its doors in 2018. Encouraged by his wife, Debbie, Bobby started bladesmithing full time under the name Devils Backbone Knives and was surprised by how fast word of mouth filled his order sheets. Then, less than a month after Debbie and friend and apprentice Joe Cunningham convinced him to apply, Bobby found himself appearing on one of his favorite television shows: the History channel program “Forged in Fire.” No small feat for someone who had only taken up the trade four years prior.

“It’s about your knowledge and ability to adapt to the circumstances,” Bobby says of the show. “There are fantastic bladesmiths that go home in the first round because they missed one parameter they were given. Your mind is going 100 mph and the last thing you want to do is look at the clock.”

Bobby competed against three other bladesmiths on the show last year. After proving his mettle and his metal in a series of challenges, the Dora-based knifemaker won the 15th episode of season seven by forging an authentic and ultimately unbreakable Chinese war sword. Although the experience proves he can build just about any kind of edged tool, Bobby’s favorite blades to build are those born of necessity. An avid outdoorsman, he strives to build knives that are just as functional as they are beautiful.

“I like making the kind of knife you can take hunting, skin a deer, quarter it, debone it, cut it all up and when you’re done the knife still has an edge on it,” Bobby says. “You can do about anything in the world with a 3-inch blade. You don’t always need a Bowie knife.” 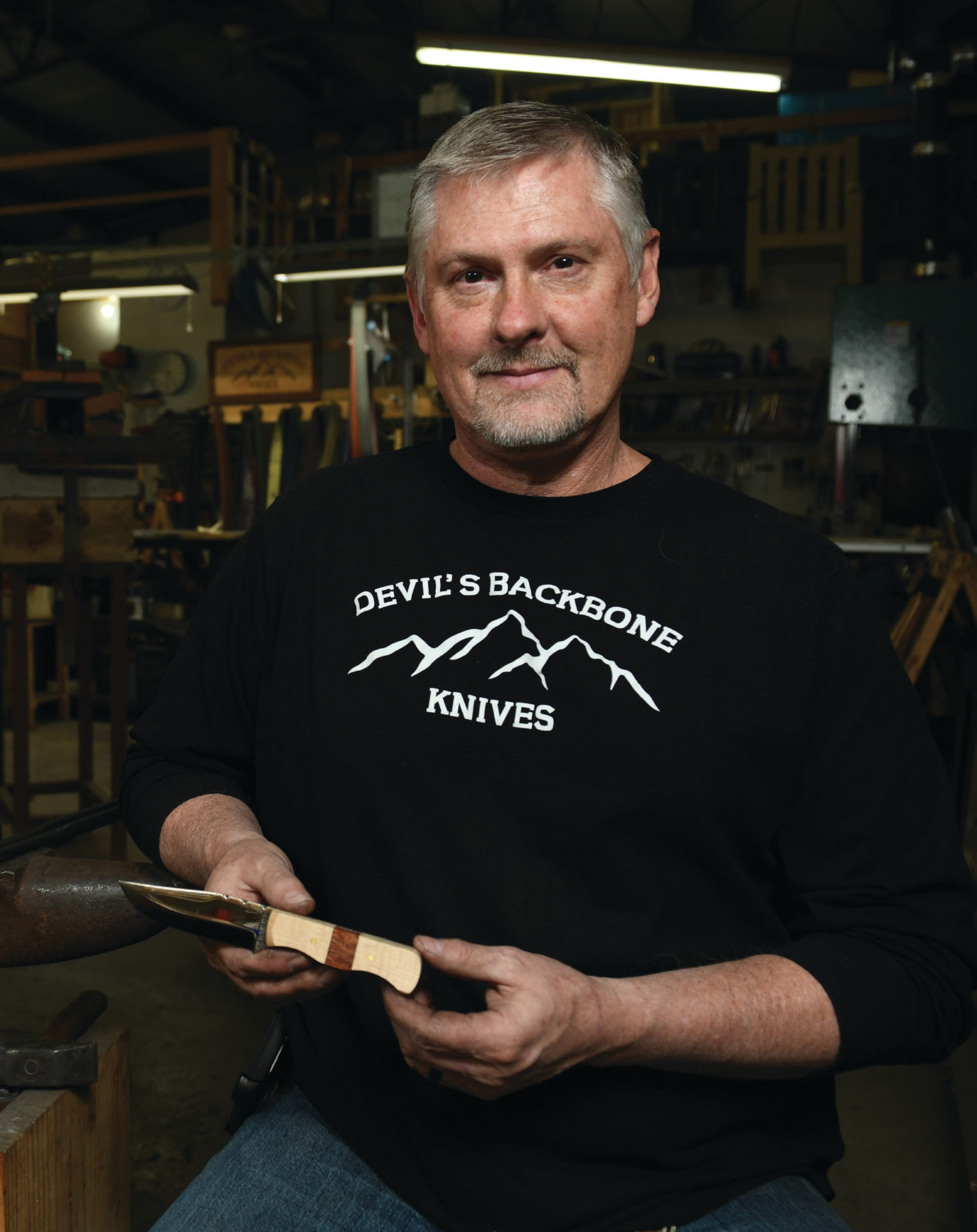 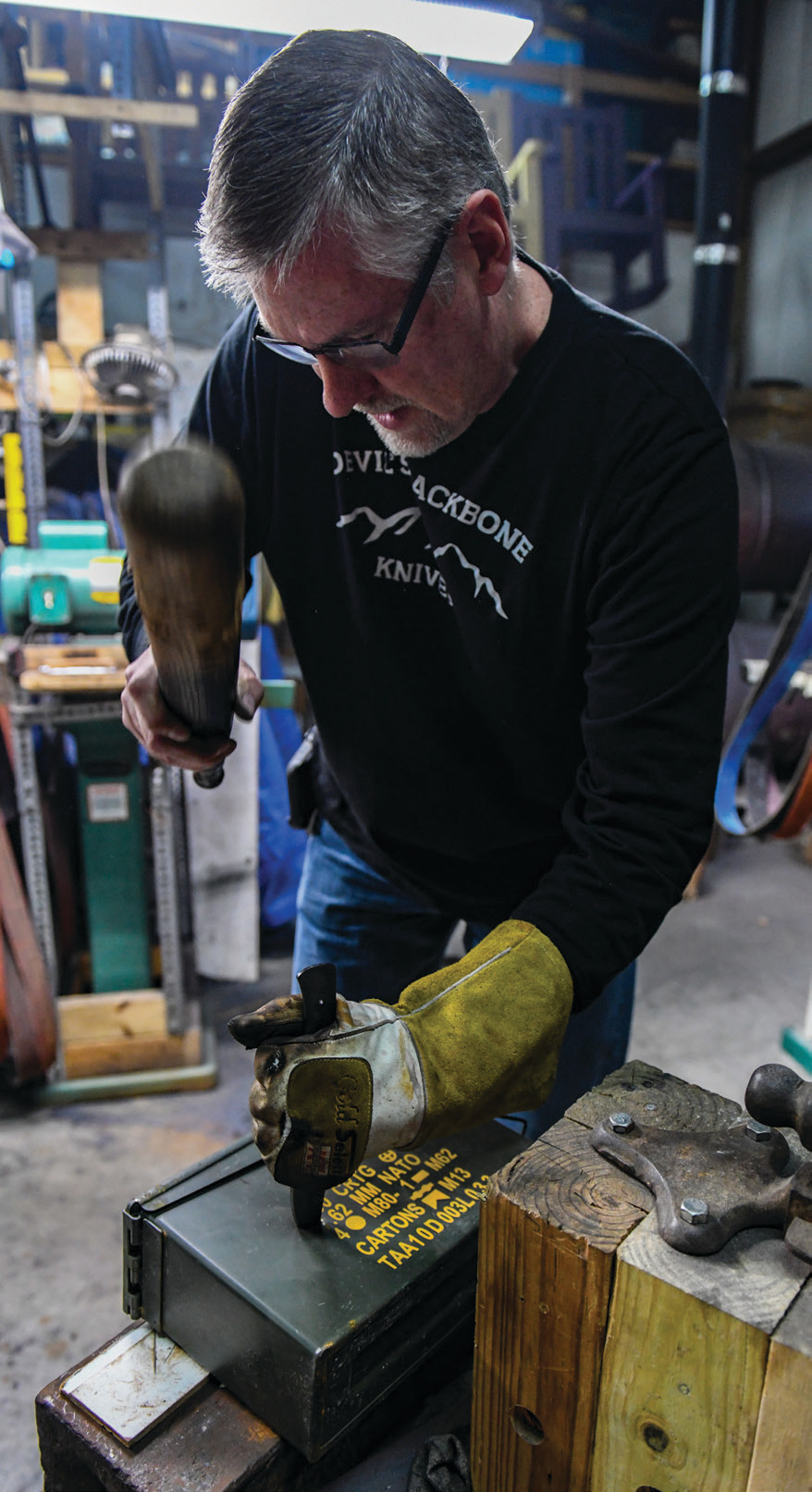 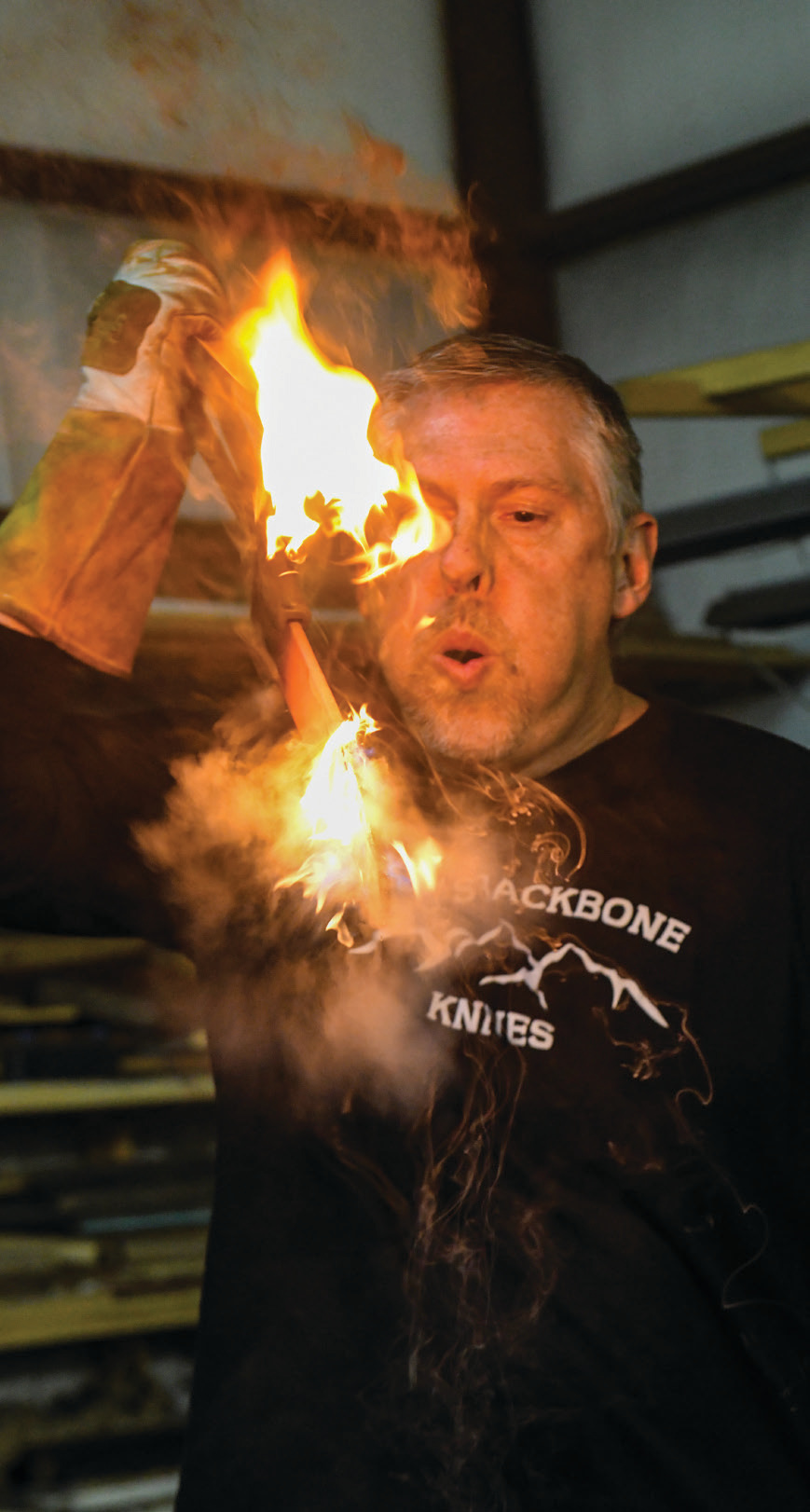 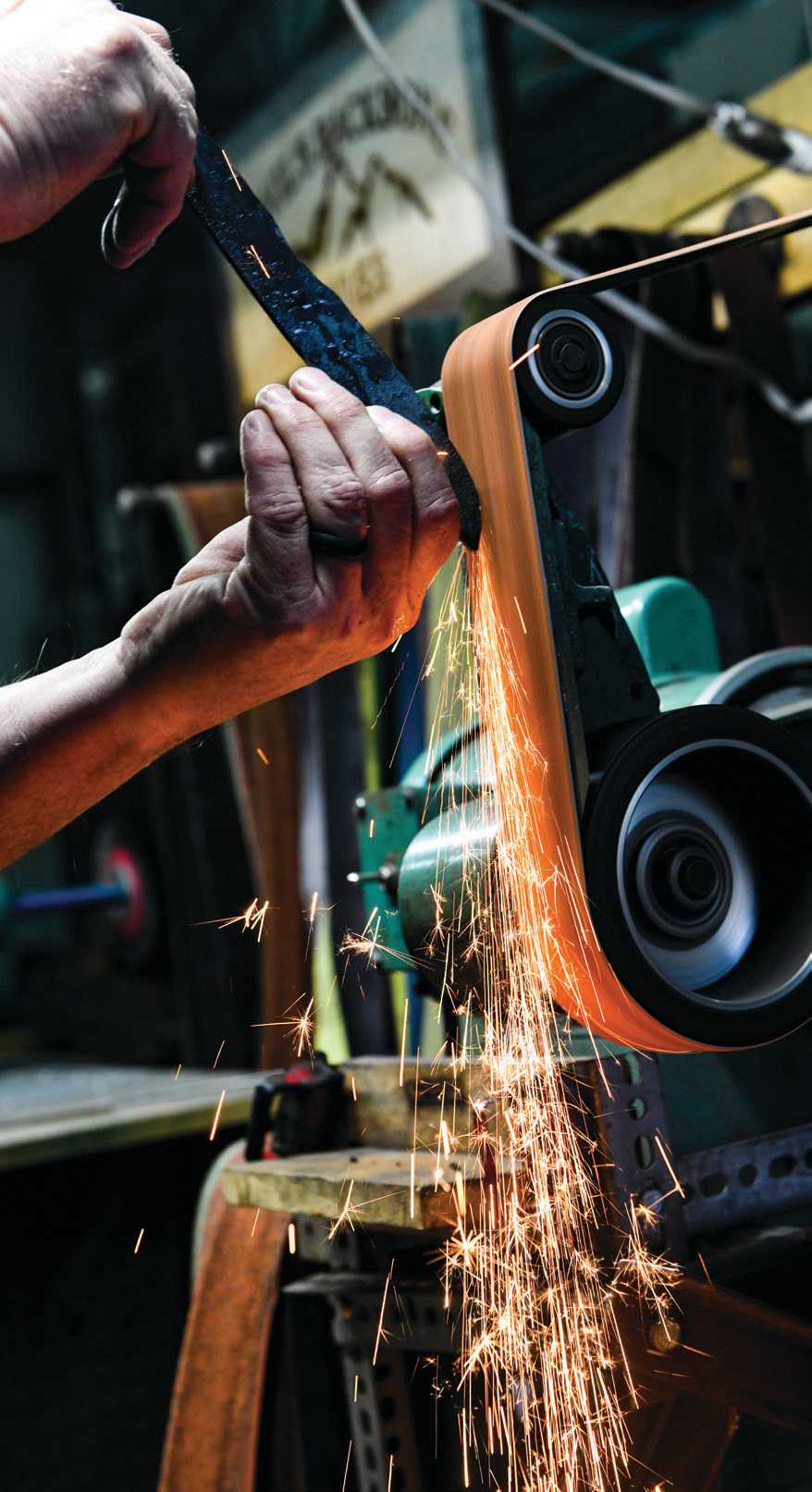 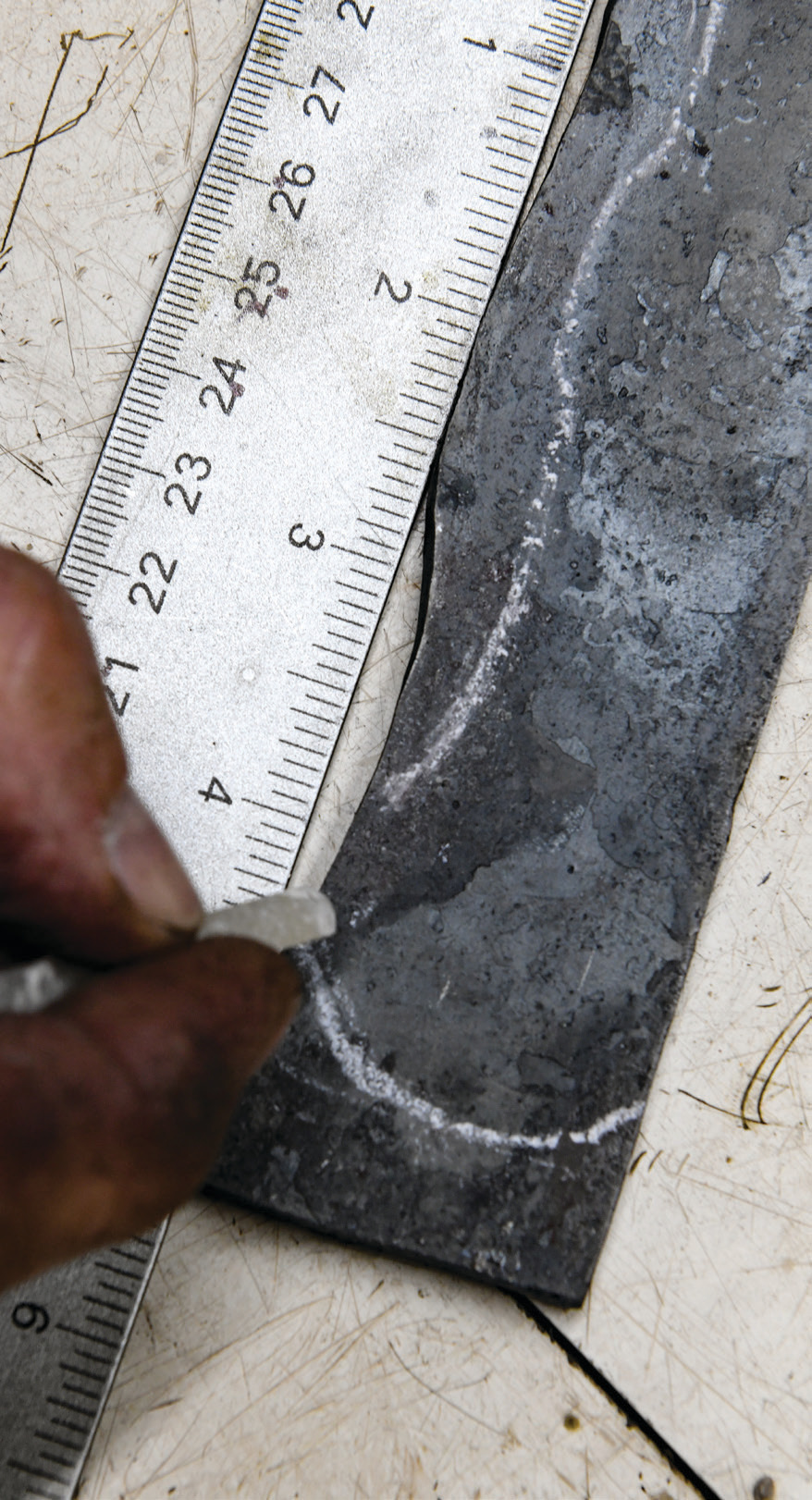 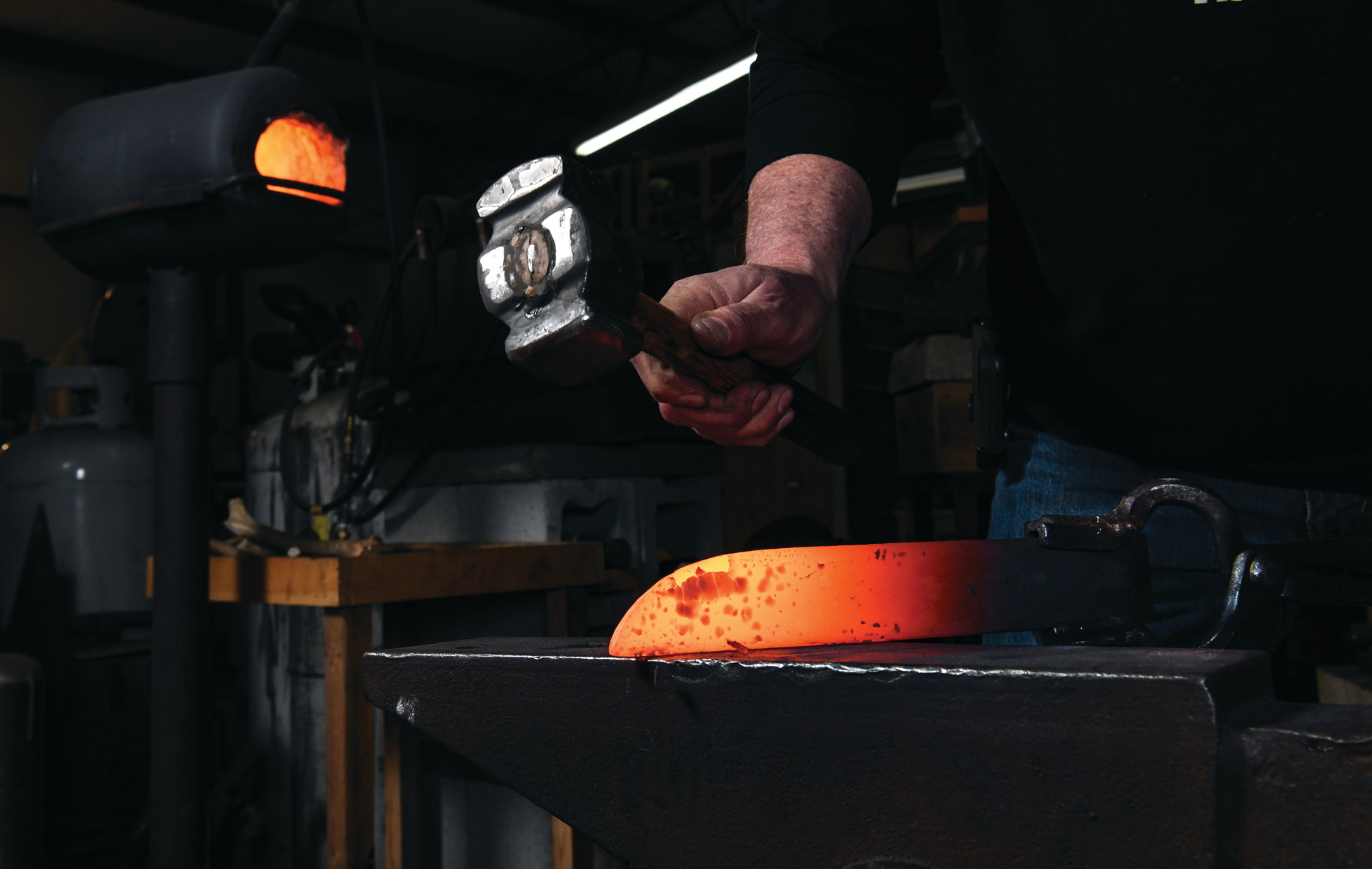 At the Devils Backbone forge, named after the nearby rugged wilderness area, Bobby crafts custom fixed-blade camp, chef and everyday carry knives. Hand-forged from high-carbon billets or folded layers of Damascus steel, the knives are as durable and sharp as they are fascinating. Proper care of the finished product means the blade will live long after its original owner is gone. The attention to detail seen in each often lands them in a display case until they’re passed down to the next generation. And the next. But Bobby builds every blade with the intention that it will be used and tests each one according to its design and function to make sure it’s worthy of the forge’s name and the customer’s hard-earned money.

“I built it as a tool. That’s what they are,” Bobby says. “If I break it, I build another one, but I want to find out why it broke because under normal use it shouldn’t. Sometimes, I’m a little hard on them, though,” he adds with a laugh.

“Hard” is an understatement. After grinding a rough handle and a keen edge on to the steel, Bobby runs the blade lightly across a piece of newspaper, which peels away like a slice of melted butter. The knife then undergoes a trial of blunt force endurance far beyond what it what would encounter in typical use around the kitchen or campsite. Using a shortened Louisville Slugger like a sledgehammer, Bobby bashes the blade through a piece of 12/3 electrical wire and a deer antler, inspecting the metal each time for signs of weakness in the form of cracks, chips and rolls. The knife is repeatedly driven point down into an ammo box and emerges unscathed. It slices as effortlessly as it did prior to entering the proving grounds.

Bobby learned the testing process in 2015 when he made his first knife with friend, blacksmith and fellow bladesmith, Harry McKee. The Forged in Fire champion recalls his first blade as being, “the ugliest thing you’ve ever seen, but I was so proud of it. I wouldn’t have sold it for a million dollars.”

Once the tested blade has been quenched and tempered, the hard work is only half done. The knife needs to be fine-tuned before grinding in the bevel and plunge line and adding detail to the spine with a hand file. Bobby’s preference is a three-fingered design that allows the knife to be used in a pinch grip for close work like skinning or a reverse grip for pull cutting. This design also helps prevent the hand from slipping down to the sharpened edge. Wooden grips need to be fit, cut, drilled and sanded then epoxied and brass pins peened or fasteners put into place before the final finishes of lacquer are applied and the blade is fitted for a leather sheath.

Bobby and knifemakers like him agree the end results are sore muscles and a primal feeling of personal satisfaction that make the effort worthwhile.

“I think every kid, woman or man wants to make a knife,” Bobby says. “I love forging. It lets you do something that’s quickly becoming a lost art.”

Part of the deal between Harry and Bobby was that Bobby had to pay forward his own lessons learned in the forge by teaching the craft to another student. Bobby anticipates the day he can begin teaching classes again as he did in pre-COVID-19 times. Currently, he has three regular apprentices: Joe, Nathan Chinn and Mike Johnson. They number four, if you count Bobby’s uncle, Rod Hitchen, a retired woodworker who at age 73 feels like a kid again hammering away at the anvil.

“I think it’s a lovely trade,” Rod says. “Something you build today you’re going to be able to pass down to your grandchildren or great-grandchildren.”

Joe Cunningham remembers the day he met his teacher, who was at that time still managing the service center. Joe entered the store with much-needed refrigerator parts on his mind, but as soon as he saw a display of Bobby’s knives — quite different from the pocket folders you’d typically find in a hardware store — he found himself under the same spell as his mentor.

“I forgot about the part I was needing and wanted to know all about the knives,” Joe recalls. “That was almost two years ago, and I’ve been coming here ever since. The guy is a master. He is as good as it gets.”

Bobby, himself still considered an apprentice in the American Bladesmith Society, humbly rejects the term “artist” when applied to his own skills. He’s proud to be one of the smiths who carry on a long legacy of prolific Missouri knifemakers. He hopes the students he teaches in the Devils Backbone Knives forge will one day go on to share their own knowledge with more eager minds and continue to keep the tradition alive.

“There are a lot of talented people around here, and I think it comes from necessity. We build a lot of stuff when we can’t go buy it, and people around here aren’t scared to try things,” Bobby says. “I give God all the praise and glory. I’ve been blessed, there’s no doubt about it.”