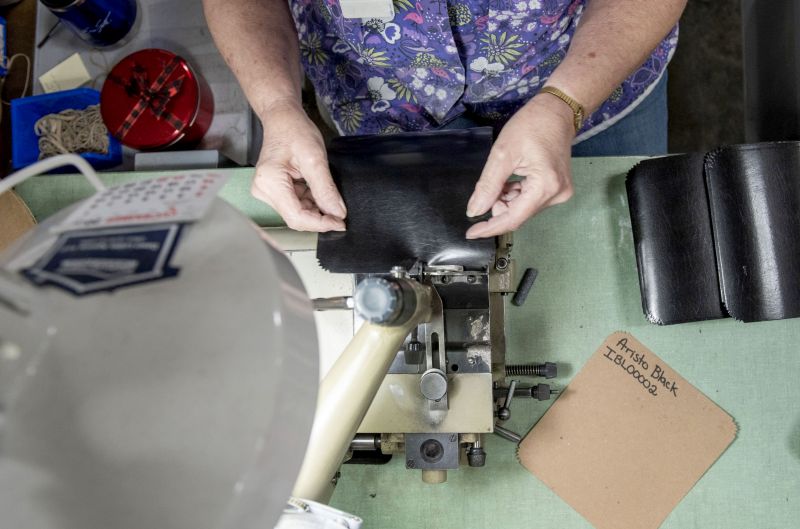 Driving by the unassuming building just inside the Ste. Genevieve city limits, only two words — a cursive “Eric Scott” — are visible on a small westfacing sign. Passersby on Rozier Street would have no idea what’s going on or being produced inside the massive facility, and that’s OK. Chances
are, however, that at some point you’ve owned a product from the facility.

Eric Scott is a leading national leather company focusing on private-label products made in Ste. Genevieve. For more than three decades, the company has employed southeast Missourians to fulfi ll orders as small as checkbook covers to elaborate high-end bags, gun cases and more. The company also has expanded into direct-to-consumer retail in an effort to stave off the steep competition abroad.

Ron Coleman founded the company in 1985, naming it after his son, Eric Scott Coleman. He previously worked for several leather good manufacturers in St. Louis and wanted to start a business of his own. Leather company Prince Gardner at one point had a facility in St. Mary, just south of Ste. Genevieve, that employed 800 workers, according to Eric Scott Executive Vice President of Administration Dana Jacobson.

“Ron knew there were a lot of experienced leatherworkers around and he was from Ste. Genevieve,” she says. “It made it easy for him to make a commitment to the Ste. Genevieve community by starting a new leather goods company here.”

A major component of the business at Eric Scott is the production of leather checkbook covers. To protect their business from goods produced overseas, the in-house engineering team at the company devised a way to automate the production as much as possible to keep them produced in southeast Missouri.

“It’s a funny little niche,” Dana says. “We do actually have the majority of the market of checkbook covers. If you go to your bank or online to get a checkbook cover, it is most likely coming out of our facility.”

In 2016, Eric Scott came out with a line of baby moccasins they sell directly to the consumer. The small leather footwear is made in seven different sizes for newborns up to 3 years old. Chérubin shoes are made with a printed leather process, giving customers a vast array of designs and colors from which to choose. The shoes come in a variety of rich colors and designs as simple as a solid color to moccasins printed resembling a baseball or football.

“We had been reading articles, doing research and understood there was a need in the market. Pediatricians were recommending young children have soft-soled shoes when they begin walking,” Dana says. “With our leather capabilities, we just knew we could offer the unique printed leather that would give parents the option to dress their kids in nearly any type of color, pattern or design.”

The moccasins are assembled by hand in Ste. Genevieve and sell for $38. They are available online through Etsy and at various boutiques across the United States.

The company is most widely known for small personal leather goods that can be carried such as purses and small handbags. However, their business stretches much further than that. The Ste. Genevieve plant produces everything from saddlebags for a leading motorcycle company to leather luggage tags that make your suitcase stand out.

Eric Scott’s leather goods are produced inside of a 150,000-square-foot facility. The company moved operations to the existing plant in the early 1990s to meet the demand for the popular leather-bound planners for personal time management company FranklinCovey.

Dana estimates the company uses more than 30,000 square feet of leather monthly making products for its clients. The leather is sourced from across the globe in order to meet each customer’s specifi c requirements. Leather hides are brought into the plant, go through a custom cutting process and are split and skived making them easier to handle. It then goes into assembly, stitching and fi nal production depending on the product. “We make everything from simple products that might only have fi ve or six steps to more complicated products that have 70,” Dana says.

The business fi rst expanded beyond the private-label products in 2012. “Six years ago we purchased Snaptotes which was our fi rst direct-to-consumer company,” Dana says. “It’s a product where customers can go online, upload a photo and purchase a variety of products with that photo.”

More than 80 different personalized items are offered through Snaptotes varying from handbags to eyeglass carriers to a bandana for your dog. In 2014, Eric Scott acquired a sealed vinyl company that was adjacent to its production facility.

A majority of the employees at Eric Scott are females. “Working in the cut and sew industry, there’s a lot of fi ne hand work that goes into it,” Dana says. “Typically smaller, female hands work better.”

Maintaining its roots in Ste. Genevieve was important to the company, especially when it came to the southeast Missouri workforce.

“Ste. Genevieve has an extremely talented, dedicated and loyal workforce,” says Dana, who was born and raised in the city. “Most of our employees have been here 20 years or longer. 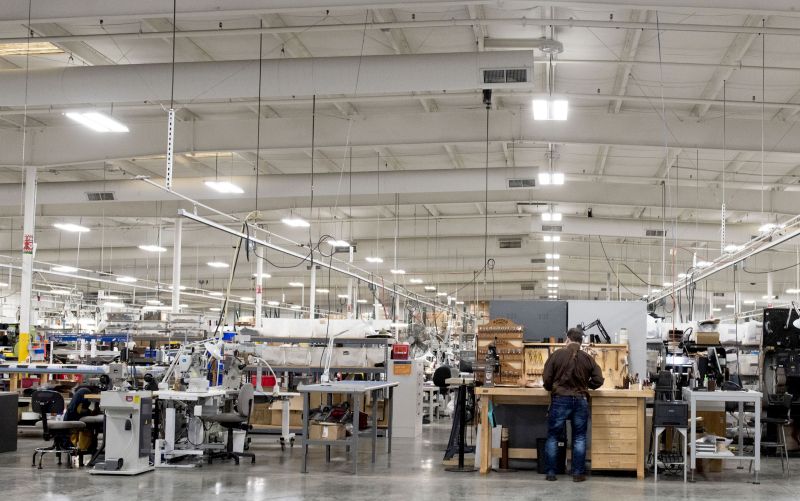 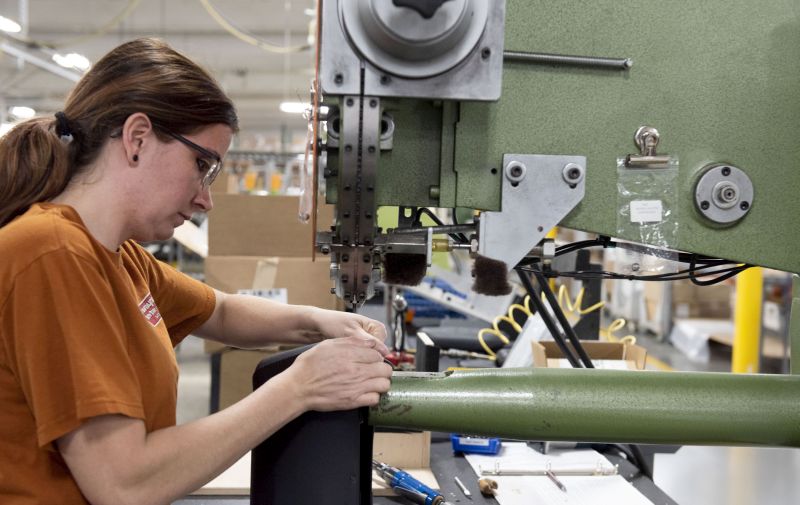 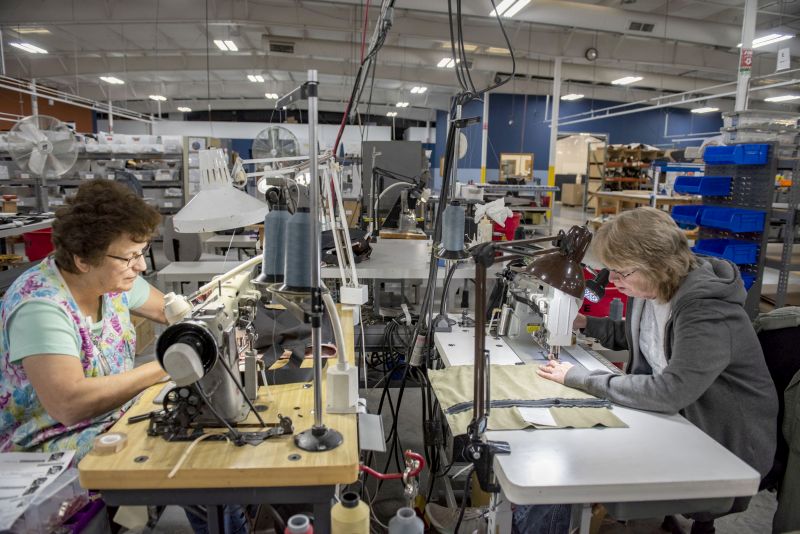 Renee Stomberg oversees leather being custom-cut for a job. 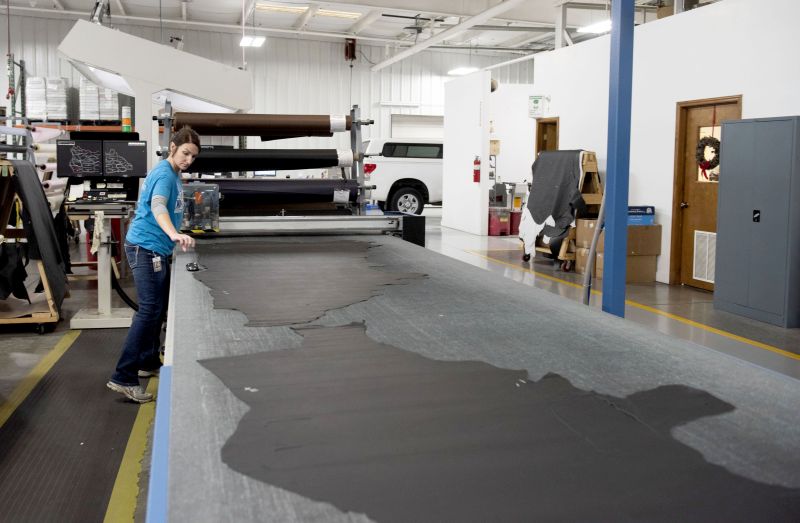 Leather checkbook covers are manually inspected before being sent to clients. 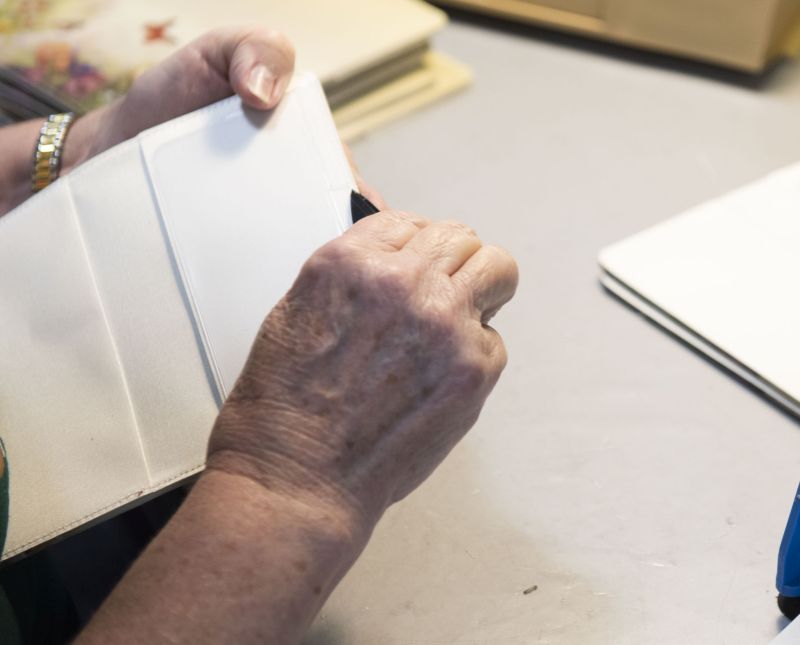 It speaks to the community in general.”

Eric Scott’s production facilities have been served by Citizens Electric for 35 years. Their membership along with their large workforce has helped buoy not only Ste. Genevieve, but all Citizens Electric members.

“We’ve watched them grow to be one of the largest manufacturers in our service area and certainly the largest private-label manufacturer we serve,” says Citizens Electric CEO Van Robinson. “We featured Eric Scott several years ago in our annual report as they completed an extensive lighting retrofi t. As a major employer in Ste. Genevieve, Eric Scott is a conscientious corporate neighbor.”

Dana says the company hasn’t relied heavily on marketing or advertising over the past 30 years to get their name out in the market. They’ve just found that producing high-quality goods leads to invaluable word of mouth recognition.