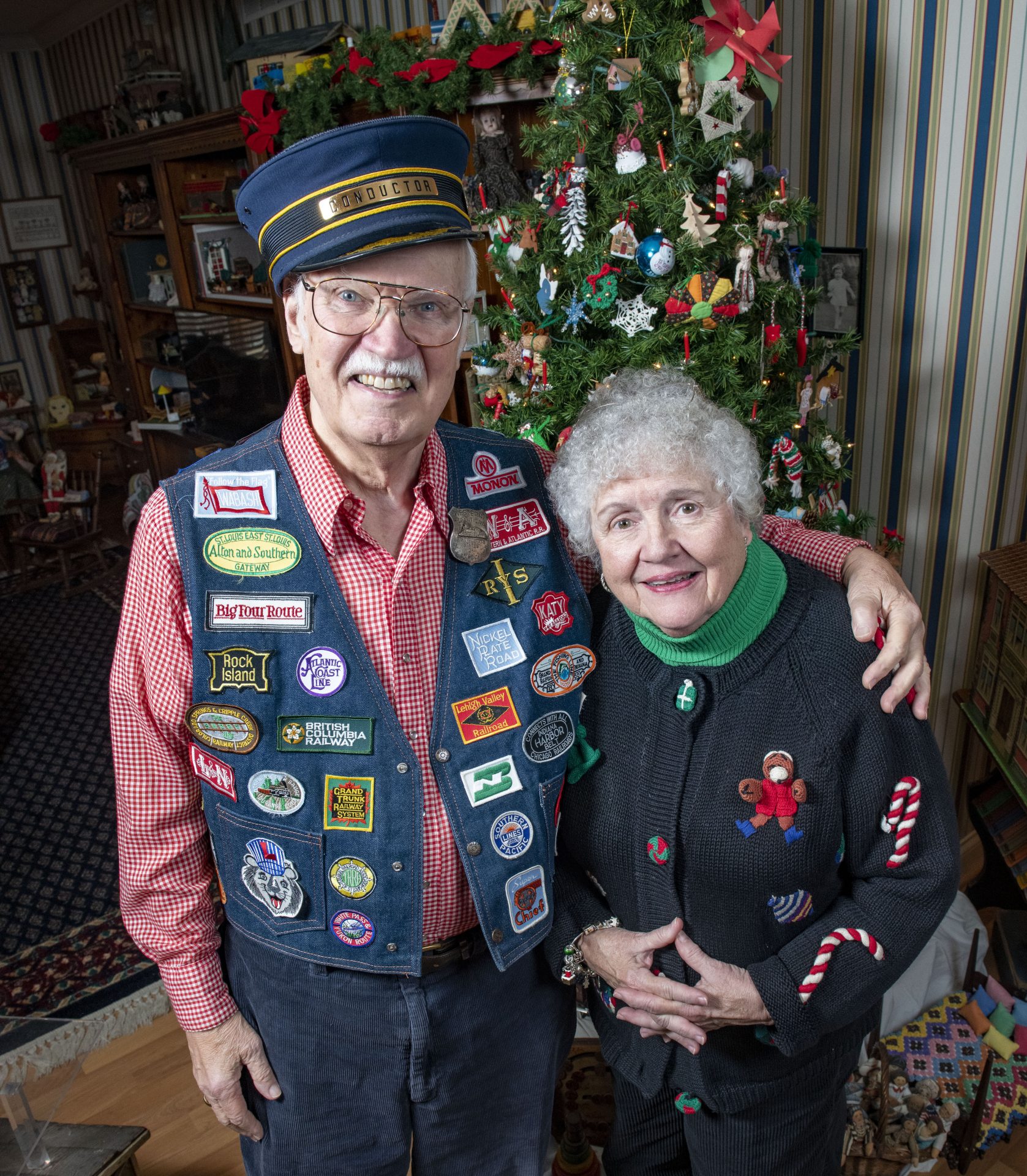 If you visit the town that Chuck and Patsy Madinger built, you may never want to leave. A stroll through its neighborhoods takes you past two- and three-story houses, trimmed for the season and glowing with light from the windows, dinner tables and fireplaces. You can enjoy a parade on Main Street, catch the Beatles playing in the city park amphitheater, watch a baseball game from a hot air balloon or even see a rocket launch. The circus is always in town, and the North Pole is only a train ride away. Anything is possible in Toyland.

The town sprang from the collections of trains, dollhouses and other toys the husband-and-wife duo have amassed and displayed for the delight of others. It began for Chuck, as it did for many children, with his first electric train set running around the tree on Christmas morning in 1946.

“It was a little Marx freight set, which was kind of the entry level for trains,” Chuck recalls. “They were inexpensive, stamped tin and very colorful.”

A lifelong love of trains was born and traveled with Chuck through his teenage years. It never truly disembarked. Working as a wine merchant, his tasting appointments were always in the evening giving Chuck ample time to peruse the antique shops of whatever town he happened to be visiting. Over time he amassed some of the gems of his collection including a tin plate pre-World War II set from The Famous-Barr Co. made by Lionel and a Flying Yankee from the 1930s made by Lionel from extruded aluminum — an exact match of Chuck’s second boyhood train set. Train collector shows and online finds helped swell the collection’s switchyard. At one time the train engines alone numbered 200, to say nothing of the other cars and accessories, with an emphasis on prewar models and those produced in the 1950s.

“As far as the trains went there was nothing that stood in my way,” Chuck says. “Now they are so extremely expensive I’ve gotten away from collecting them.”

Dollhouses came in 1965 with the birth of the Madingers’ first daughter, Trish. Chuck and Patsy redecorated and renovated a brick house that is still in the collection today. Patsy began collecting them in earnest in 1997, sewing pieces such as tablecloths, rugs and bedspreads to decorate the rooms. One house she crafted shows Santa Claus checking his list for the upcoming holiday run. It recreates a 21-year St. Louis tradition Chuck and Patsy would help organize called Santa’s House. Each year the lively old elf and Mrs. Claus would take a break from the North Pole to visit children in St. Louis.

Patsy estimates there are between 150 and 160 separate houses in the collection — a number which doesn’t include the dolls and other toys that line the shelves of Toyland. Some of the oldest include a pressed tin kitchen scene from the late 1800s, an 1880s two-room dollhouse built by Whitney Reed and a set of dollhouse blocks from 1907 that belonged to her father. A custom German-made house that once belonged to the Buick family of Detroit shares shelf space with a turn-of-the-century Dunham’s Cocoanut Dollhouse and several antique lithographic pieces from the R. Bliss Manufacturing Co.

“These houses really do have a wonderful history to them,” says Patsy, a volunteer and board member of the Miniature Museum of Greater St. Louis. “I have at least one from every decade of the 20th century. They are getting harder and harder to find, and dollhouses like that are almost always in museums anymore.” 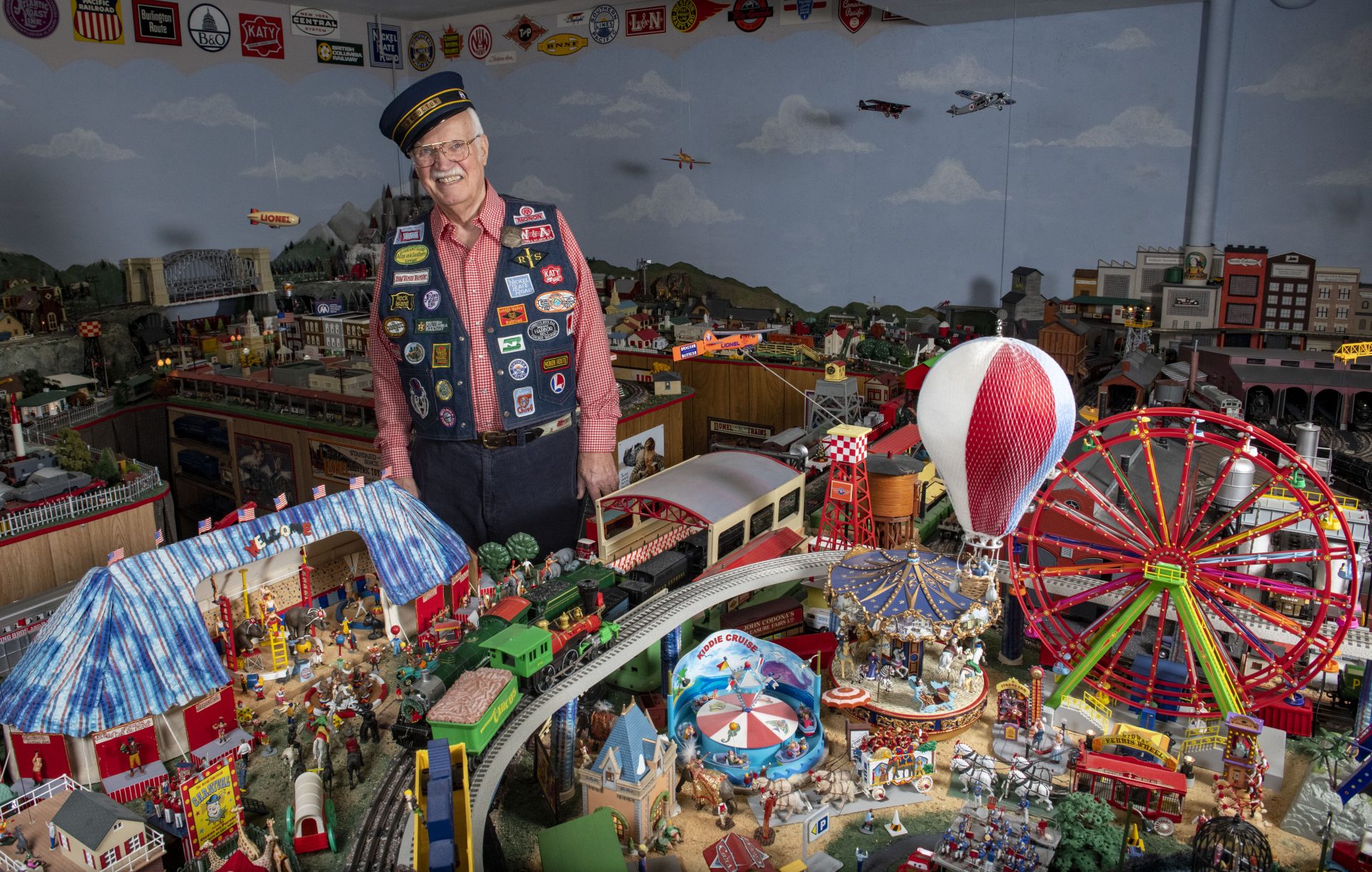 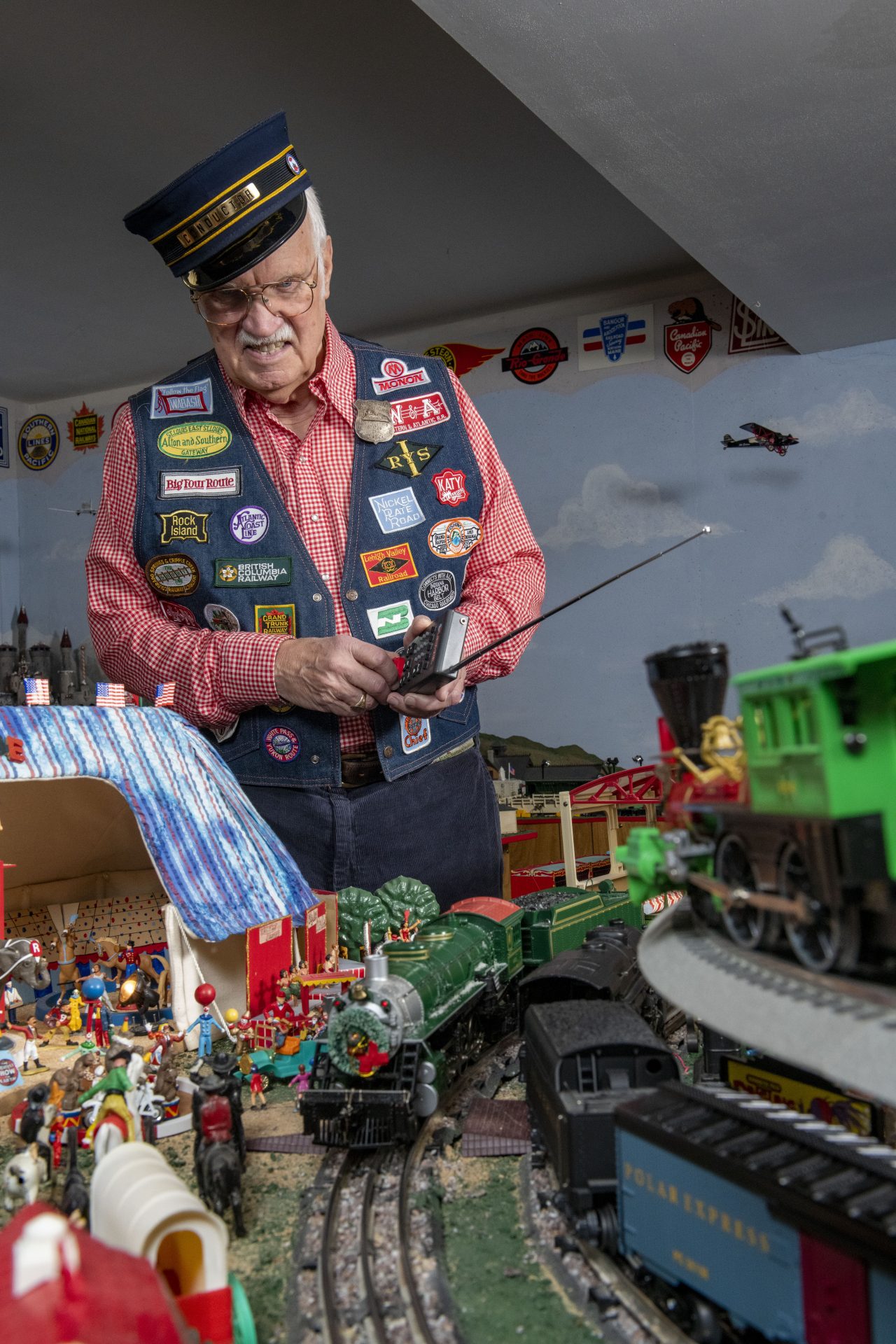 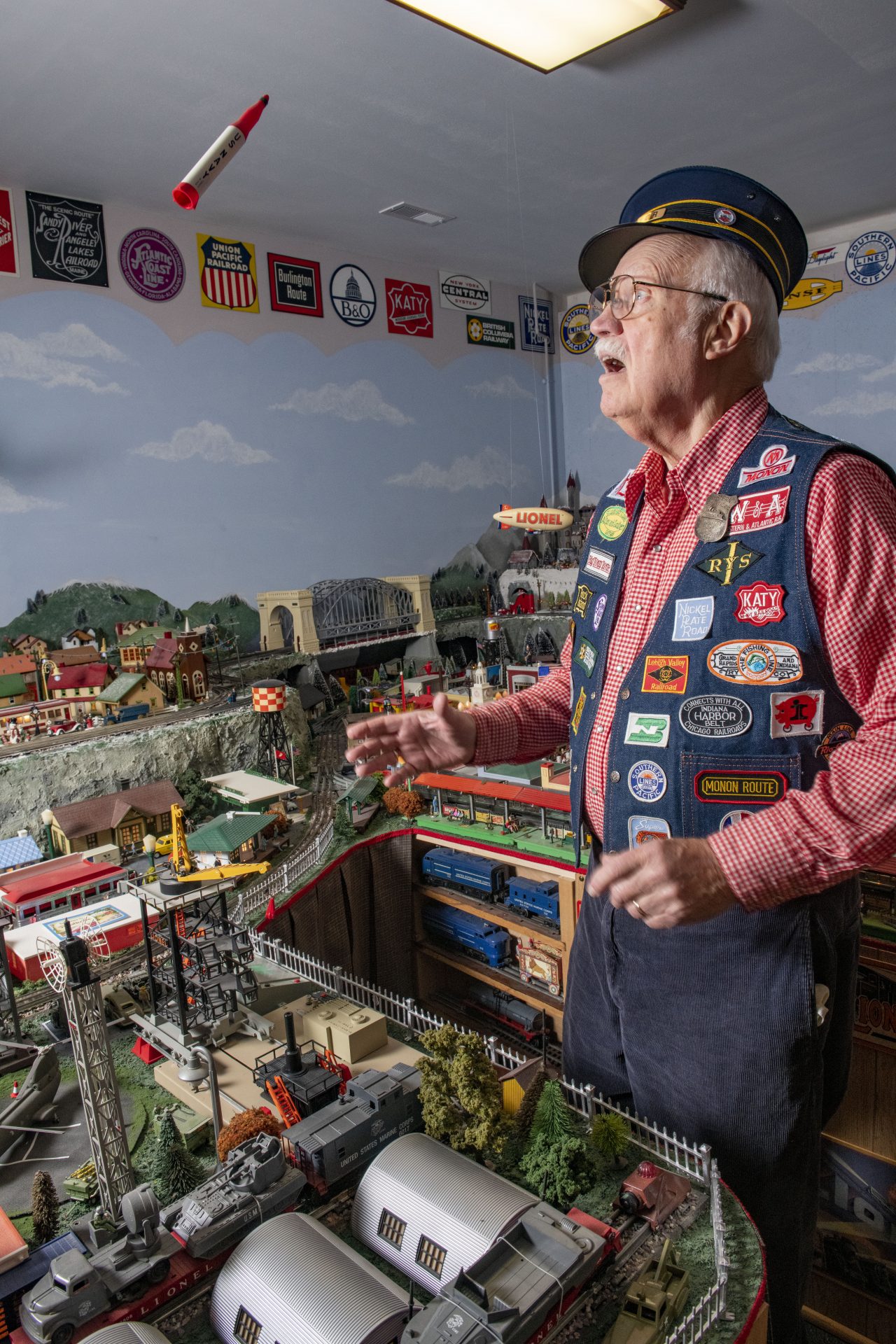 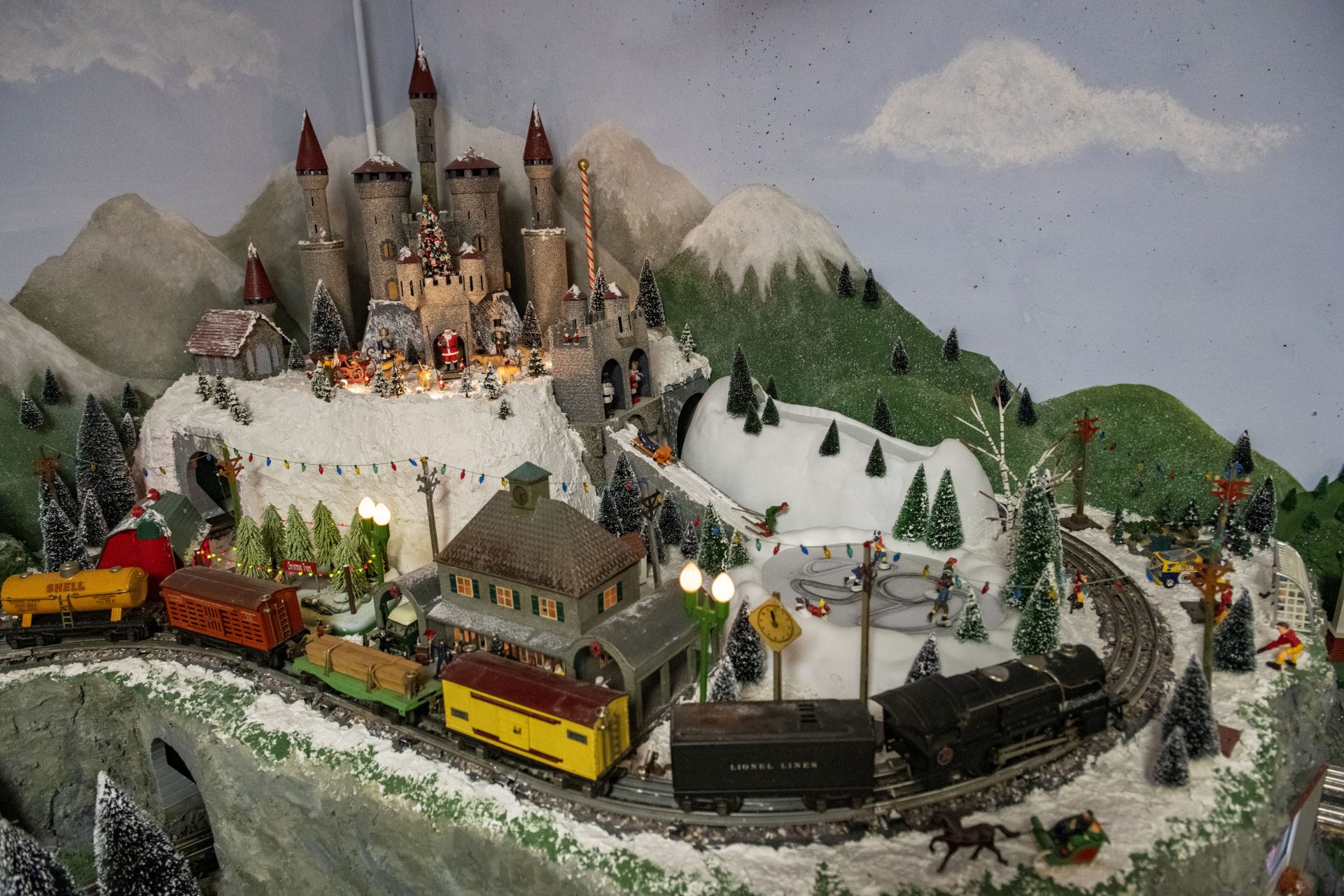 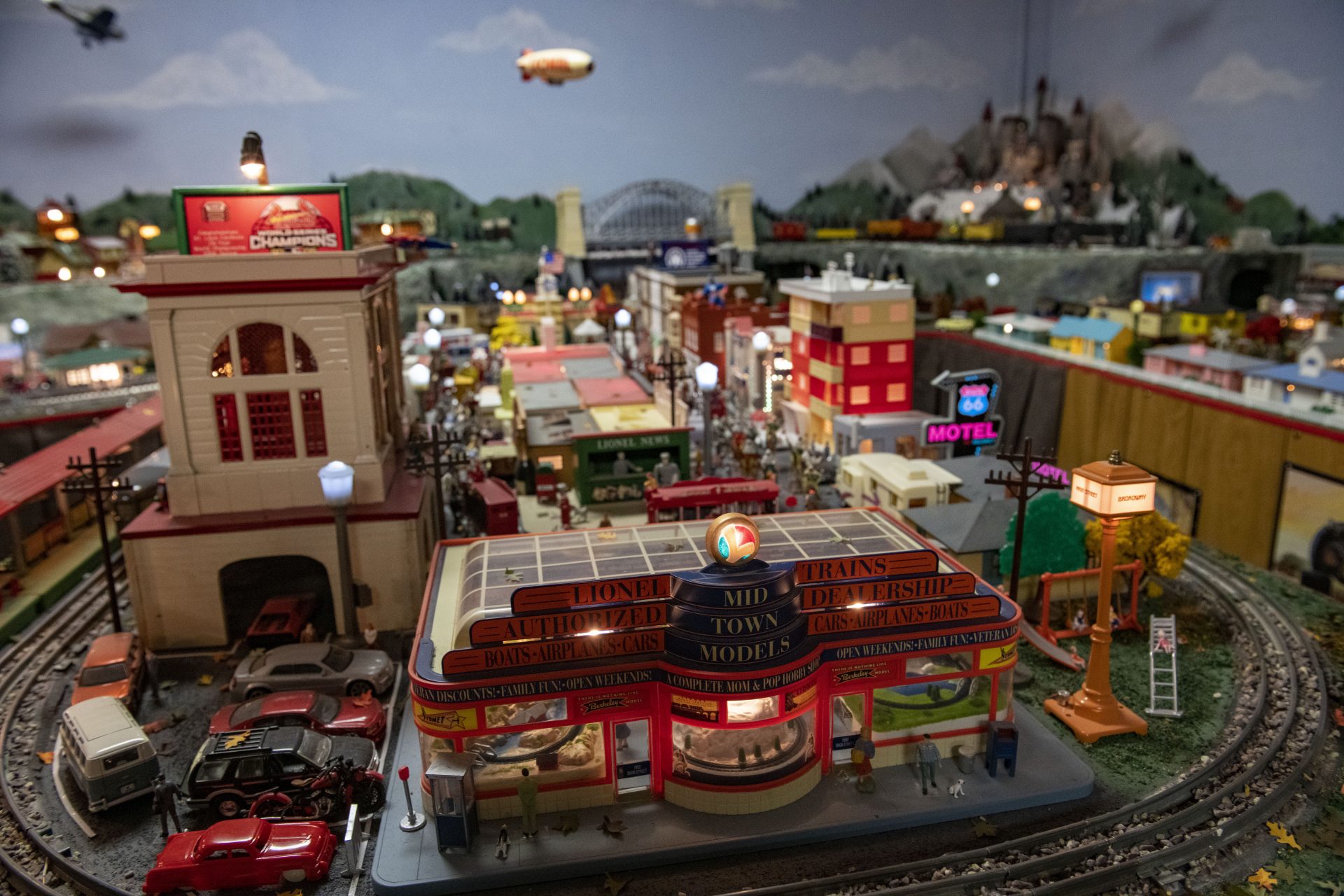 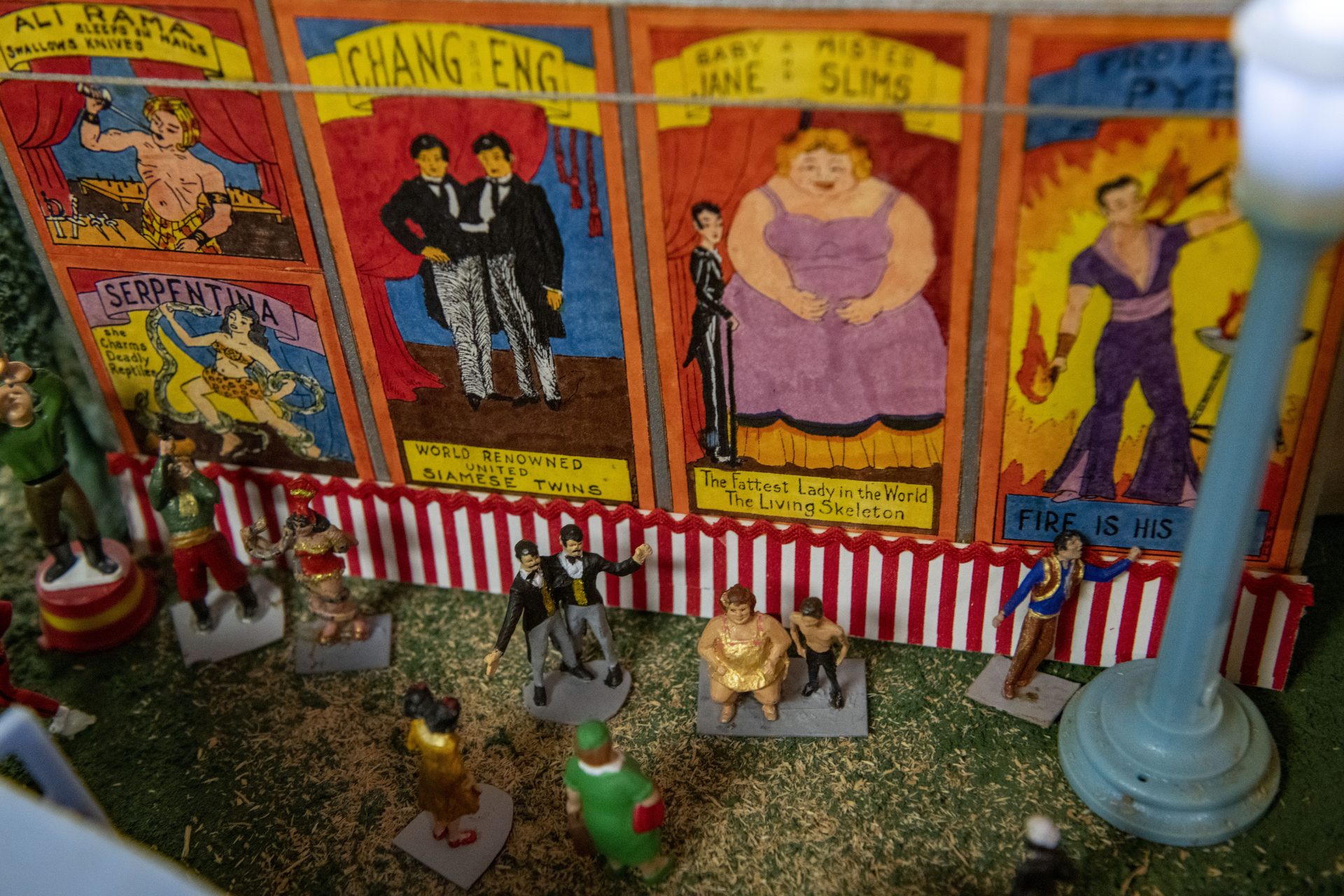 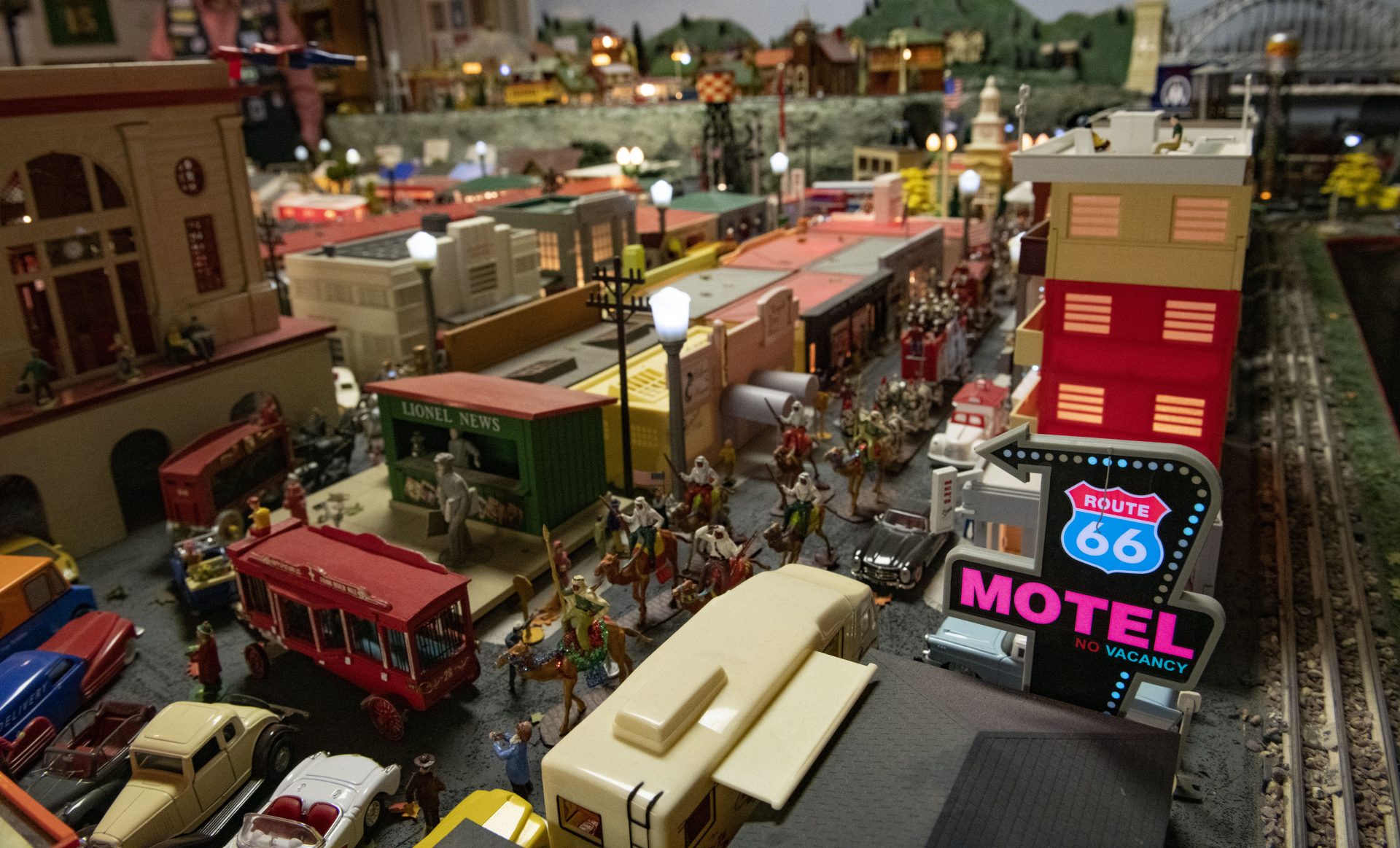 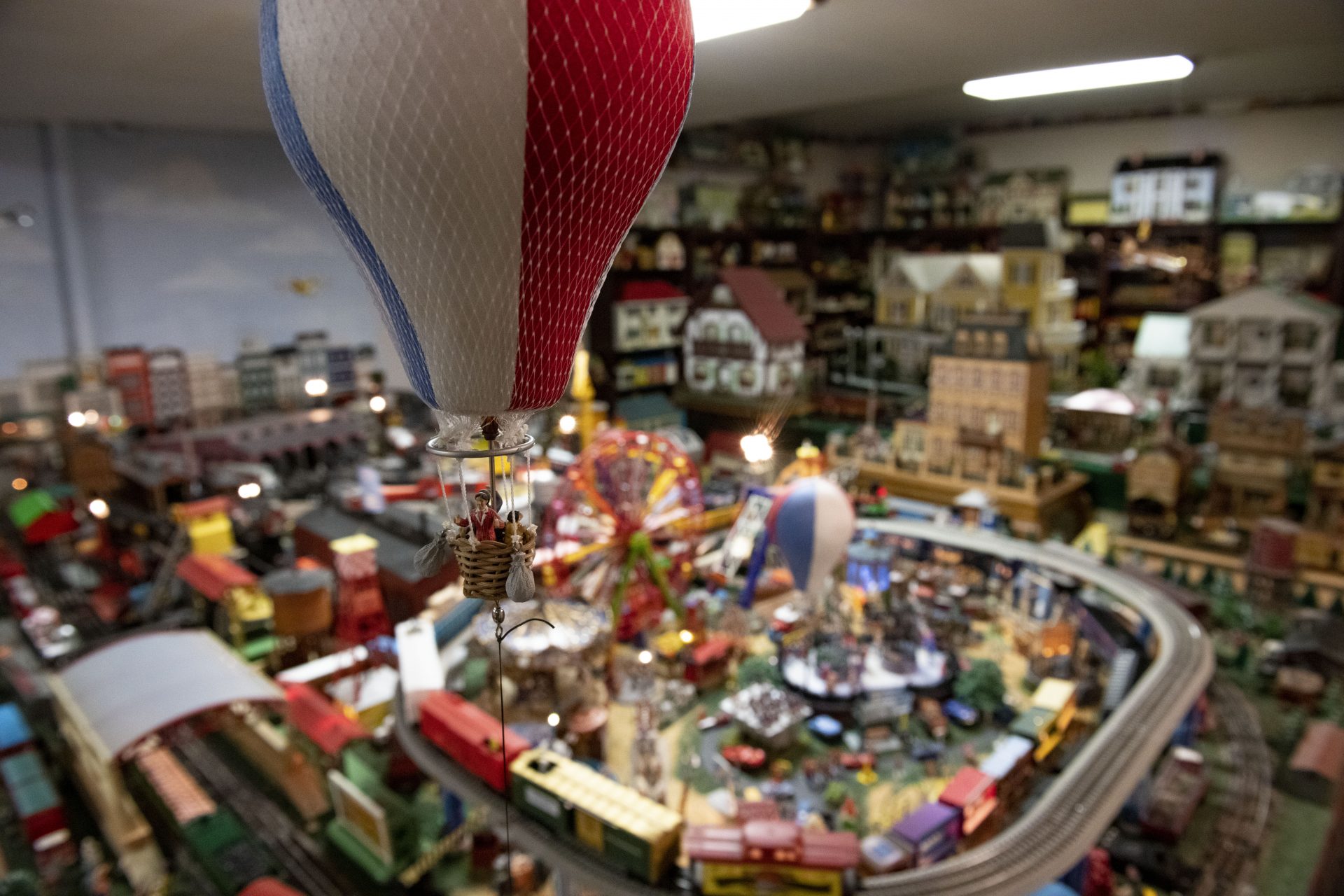 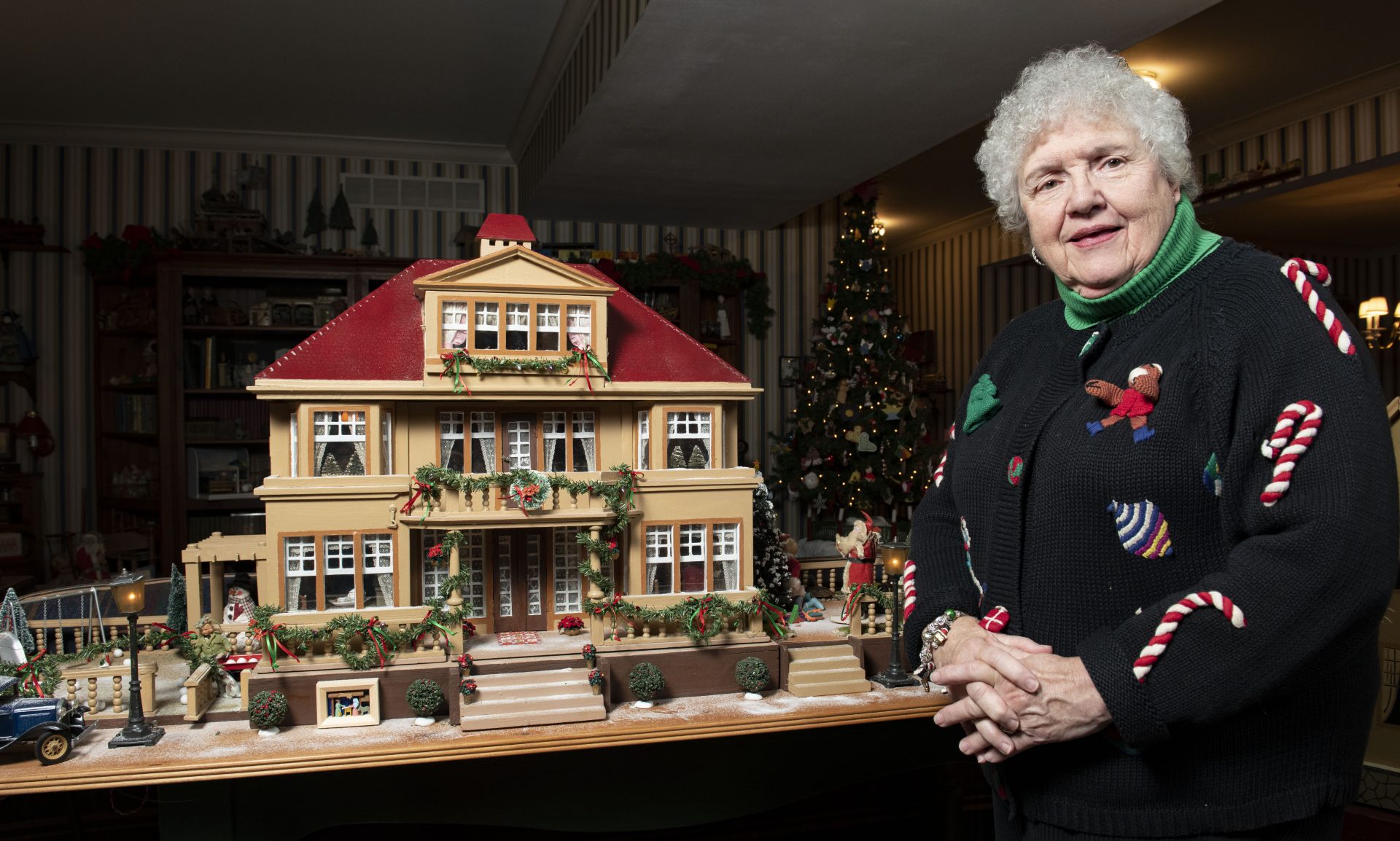 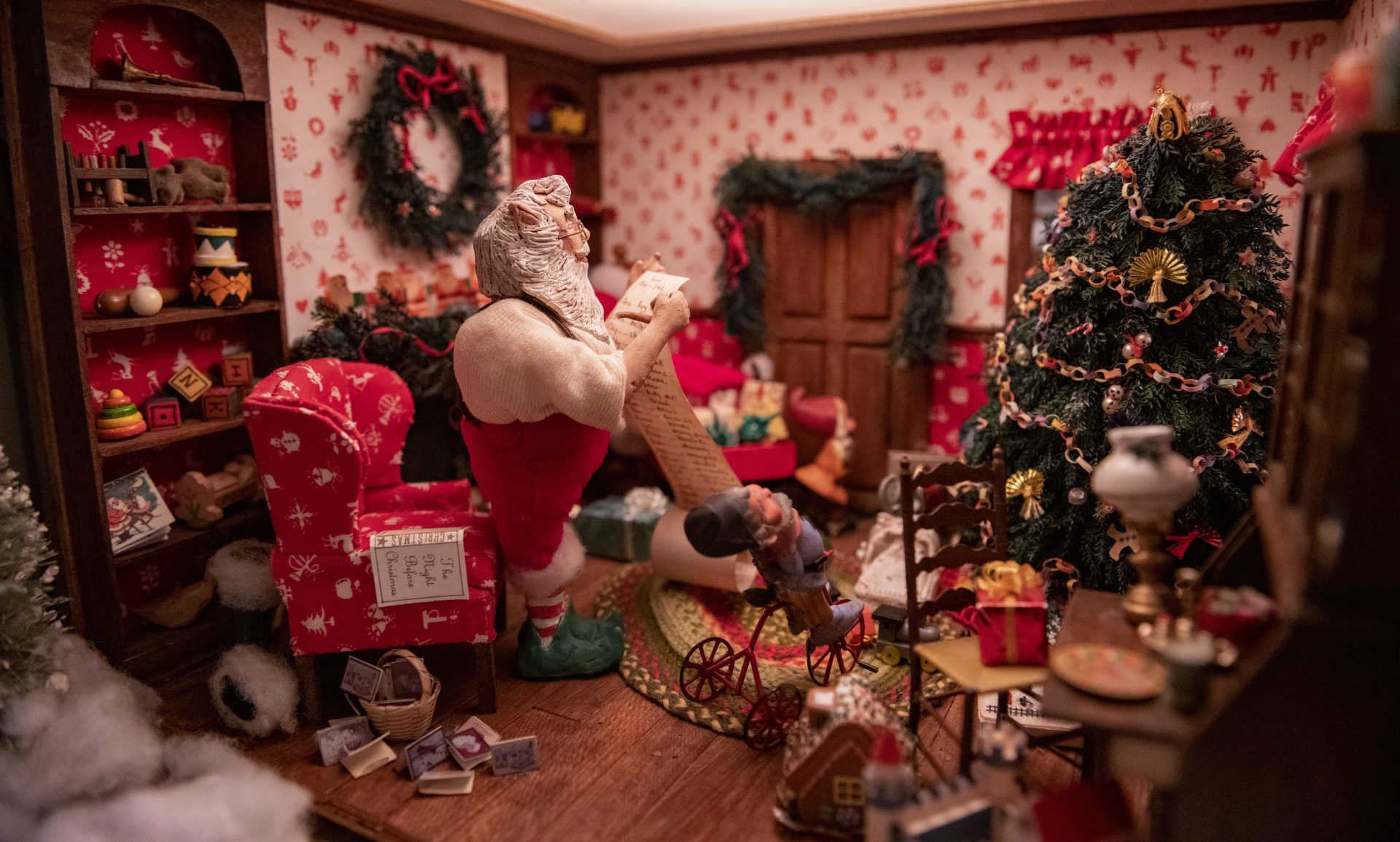 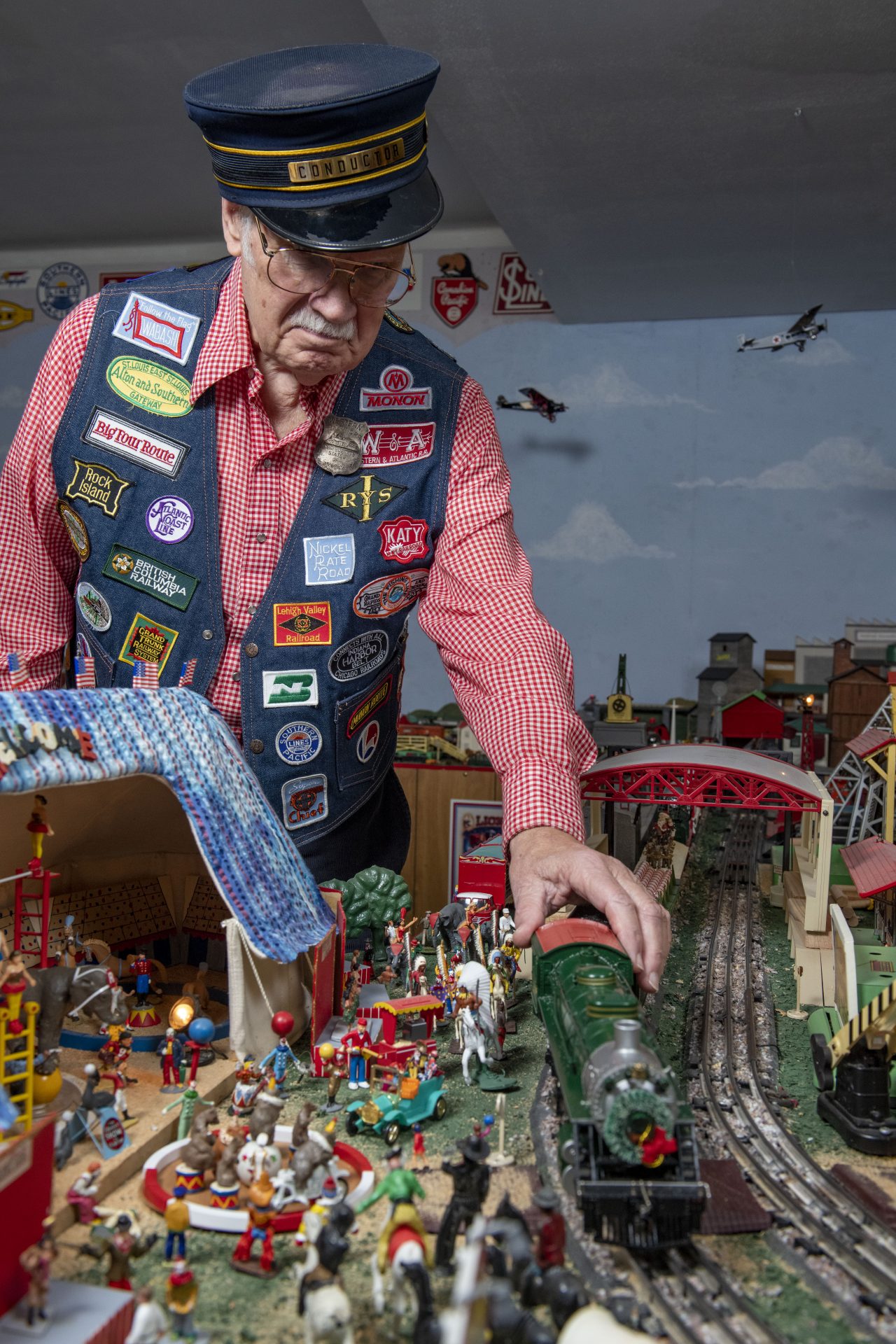 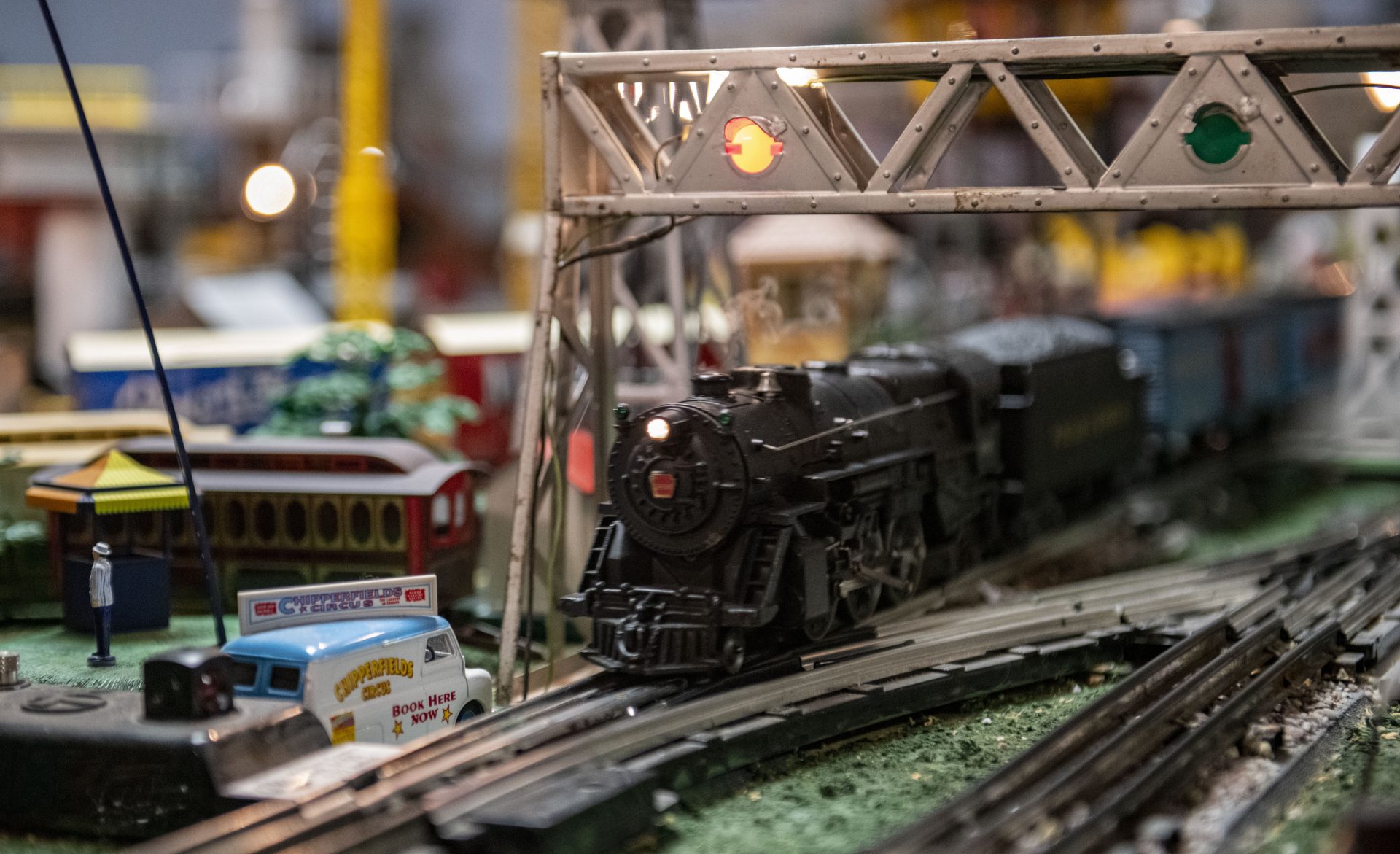 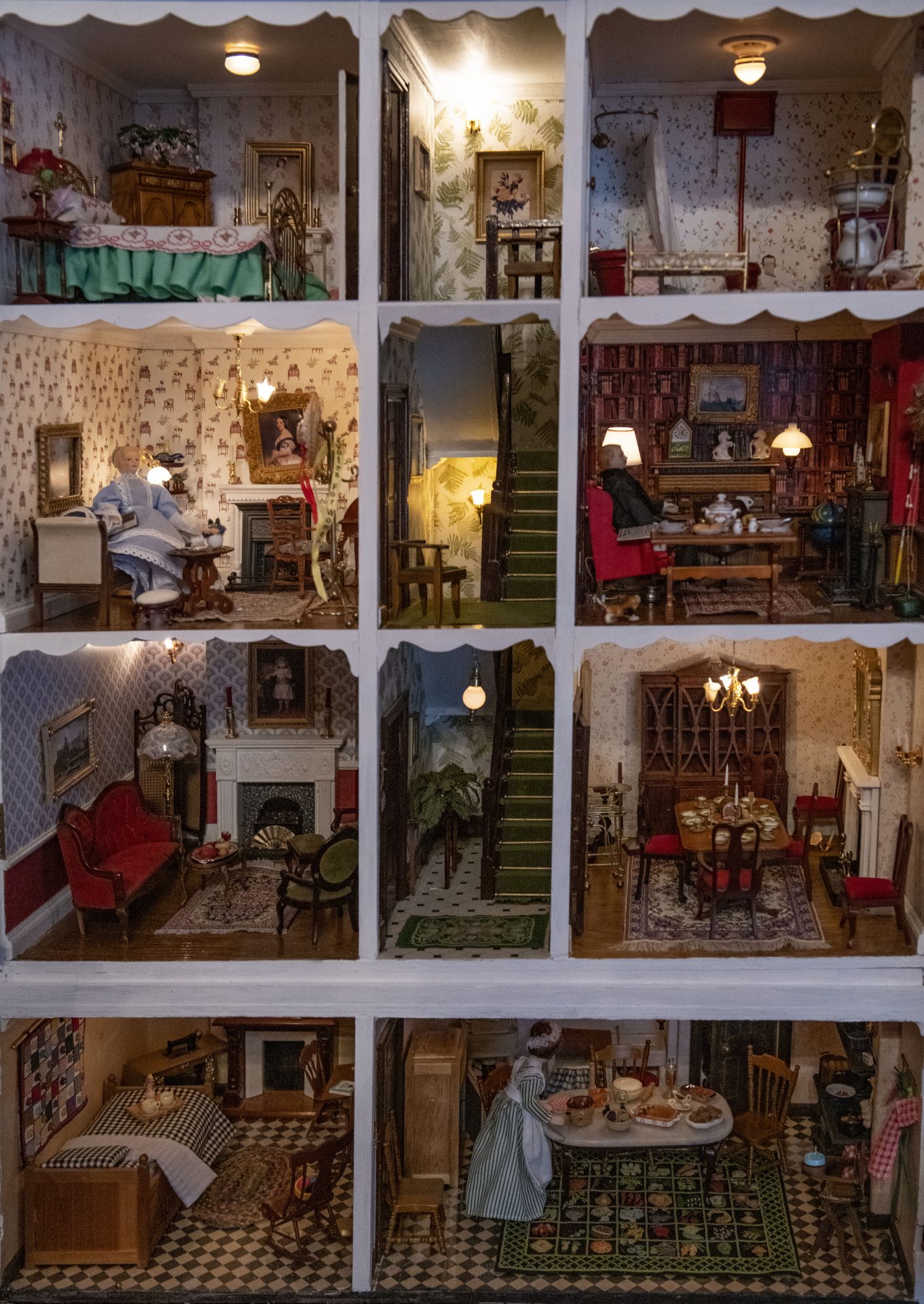 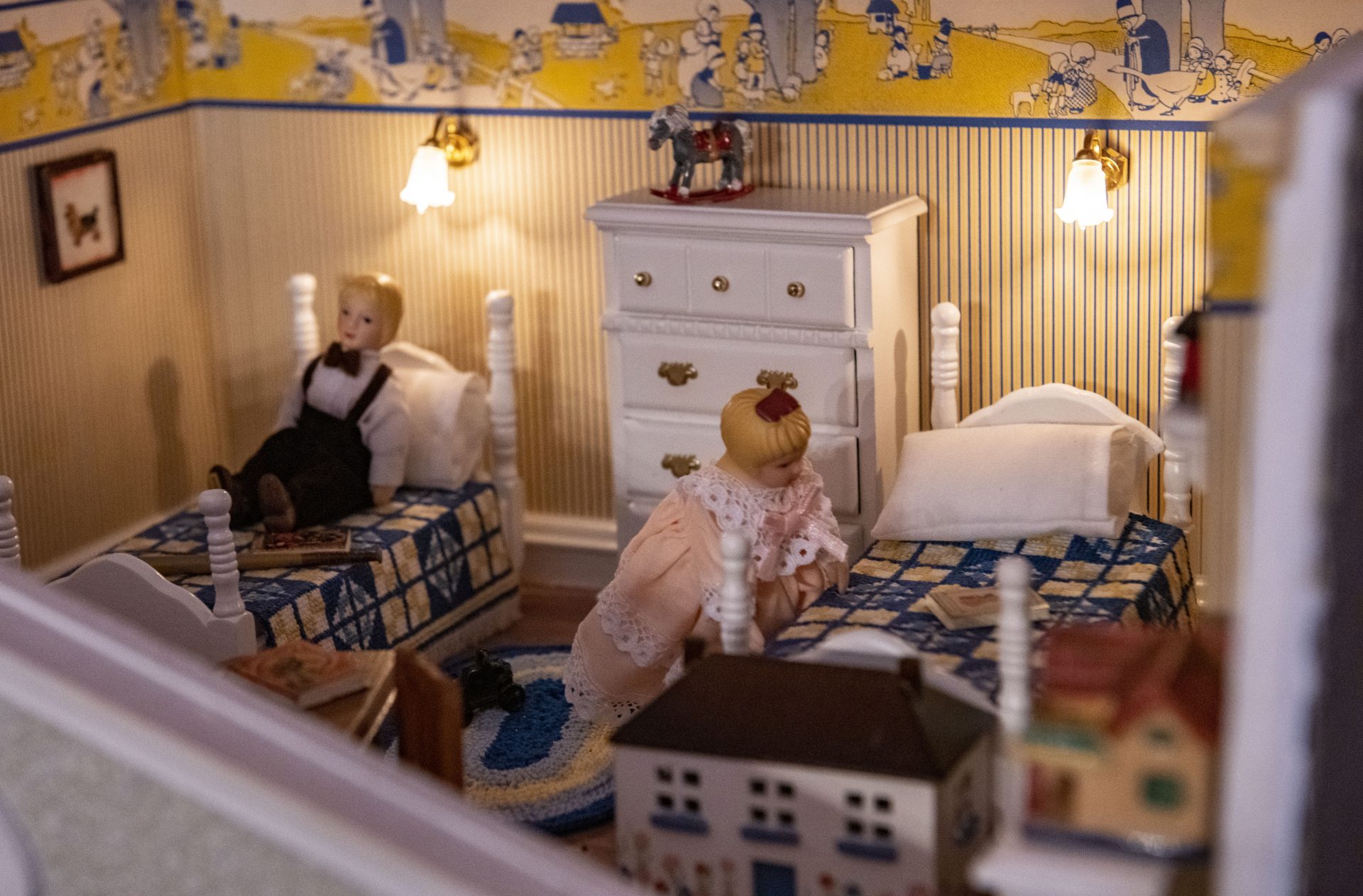 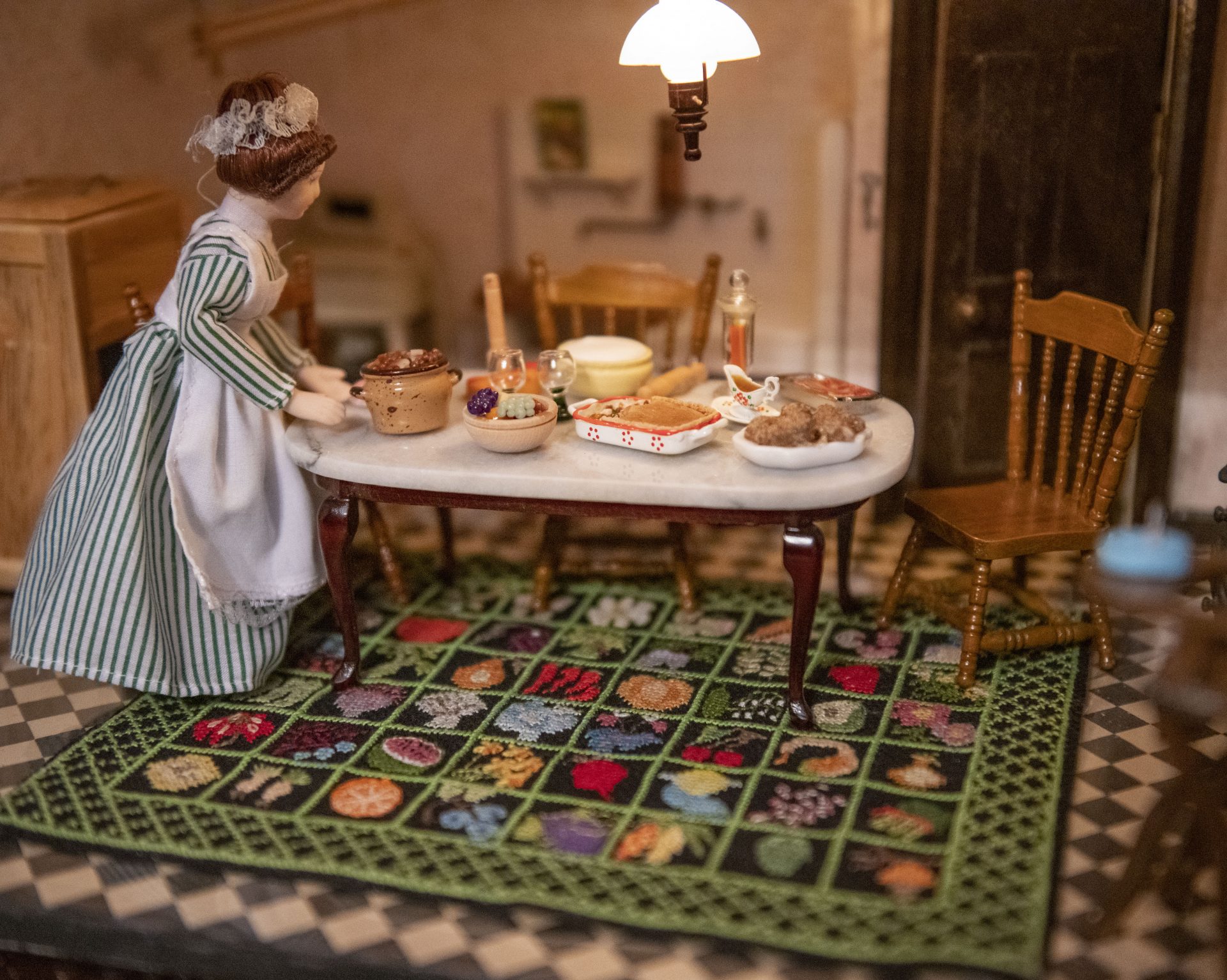 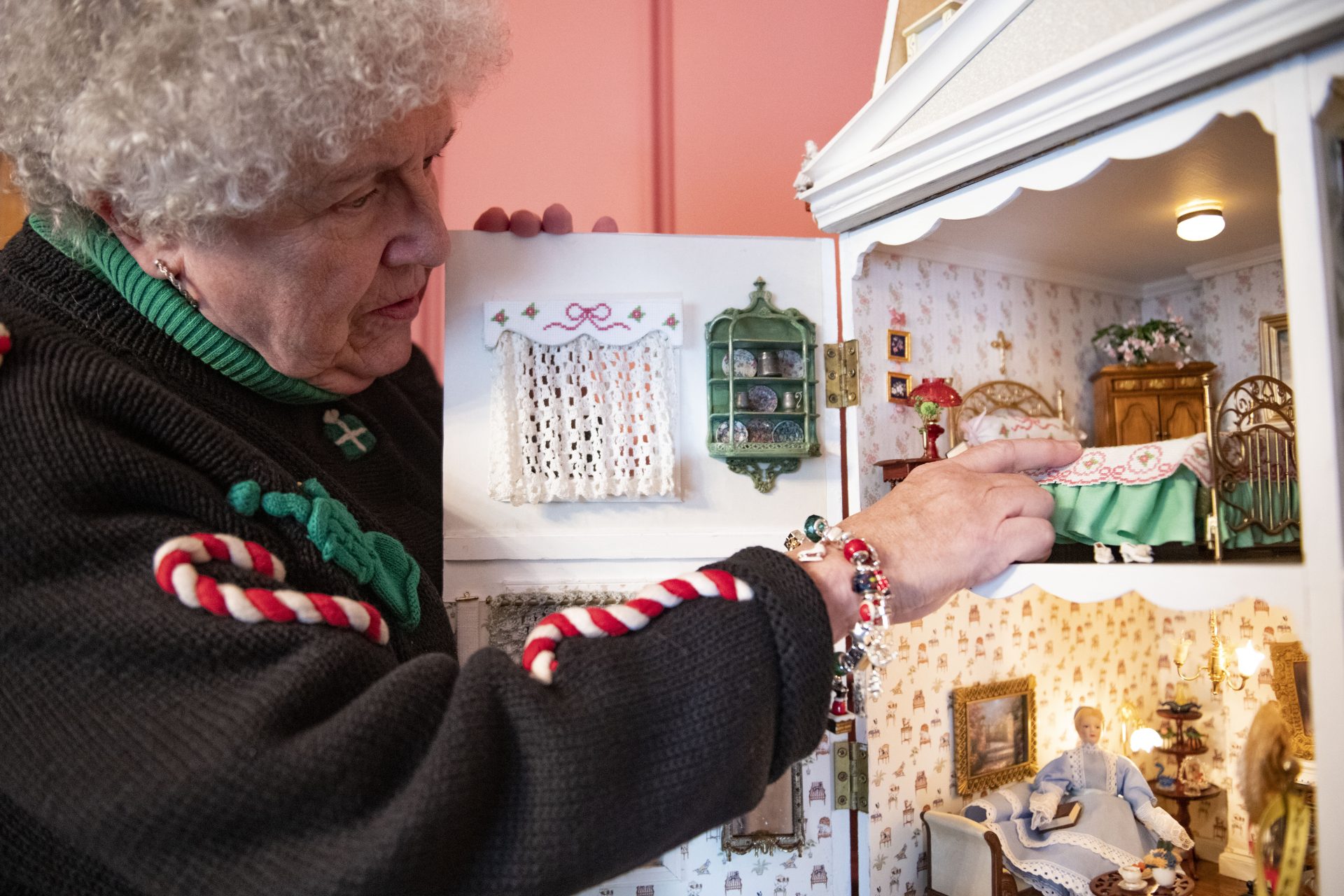 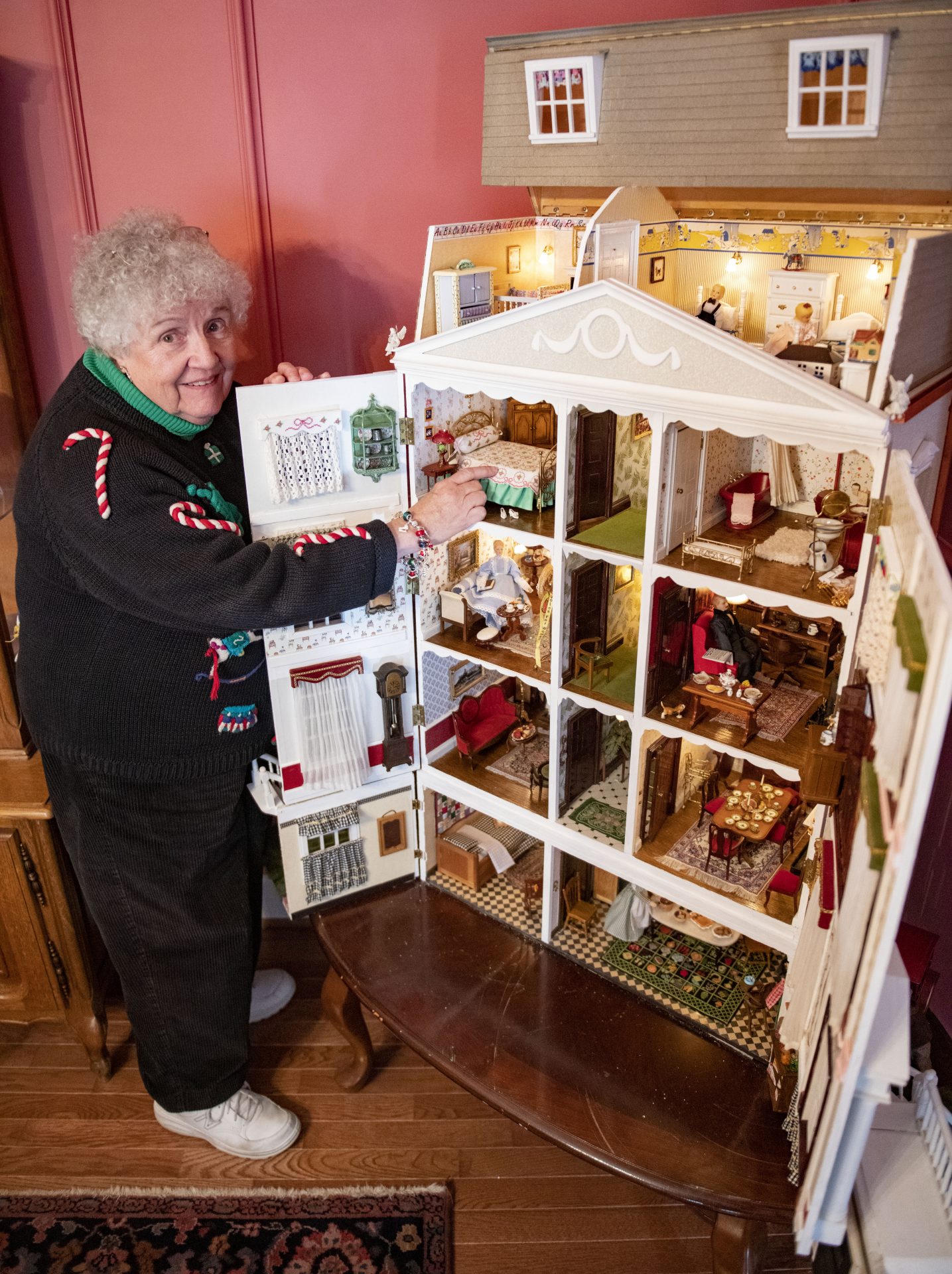 A collection so impressive begs to be seen, so the Madingers went about building a display for the trains and houses. The sprawling megalopolis, Toyland, comprised the lower level of the Madingers’ former home in Innsbrook. It contained 10 running trains — 13, if you count the microscopic models on display in the model toy store.  The display was so impressive that the Lionel Collector’s Club featured it twice in their publication “The Lion’s Roar.”

The couple’s love for their make believe world is evident in the details. Patsy painted the mountain and sky backdrop and made a big top tent for the circus. She and Chuck built an elevated layout for the trains and buildings, combining pieces from different scale size model sets and following their fancy in the design. Whereas most model train displays pay the strictest attention to authenticity of size, Chuck describes the scale of Toyland as “whimsical.” Hence, the O-scale spectators at the baseball game are watching the aptly named Plasticville Giants.

“We built it as we went,” Chuck says. “Patsy would be a little upset when she would have a nice cornfield and I’d want to run a set of train tracks through it.”

Patsy took the challenges in stride, and says she’s even come to accept that — at first glance, anyway — most of Toyland’s young visitors are more enchanted by Chuck’s collection than her own.

“The trains whistle and smoke and chug along, and the dollhouses just stand there,” she says with a laugh.

Rather than trying to amass every single piece of a certain set or collecting for the sake of having a collection, Chuck and Patsy favored buying pieces or building displays that spoke to some family memory. The circus train pays tribute to the two years Chuck spent running the train at the St. Louis Zoo. The homecoming parade is reminiscent of the Great Circus Parade frequently held in Milwaukee, which the Madingers would visit while living in Chicago. One dollhouse made by Patsy is fashioned after “Old Black Witch!” — a favorite children’s story. Another is modeled on the schoolhouse from the family’s favorite television show, “Little House on the Prairie.”

“A lot of these things may not necessarily have meaning for us,” Chuck says taking down a Jack Rabbit Express made by Holgate. He turns the wooden pull toy in his hands. Visible underneath is the inscription: “Happy Christmas 1945, Mother and Dad.”

“When you see these things, you can’t pass them up,” Chuck says.

Although the full display is still under reconstruction following a recent move, the husband-and-wife duo are excited to start sharing their collection and memories again.

“It’s wonderful to share it and that people want to see it,” Patsy says.

“One of the joys of the collection is the companionship that we have,” Chuck adds. “And of course, seeing the look on people’s faces when they start to remember something from their own childhood and reminisce, ‘I had that train or dollhouse as a youngster.’ ”

For more information about Toyland, contact Chuck and Patsy Madinger at cmadinger@centurytel.net.