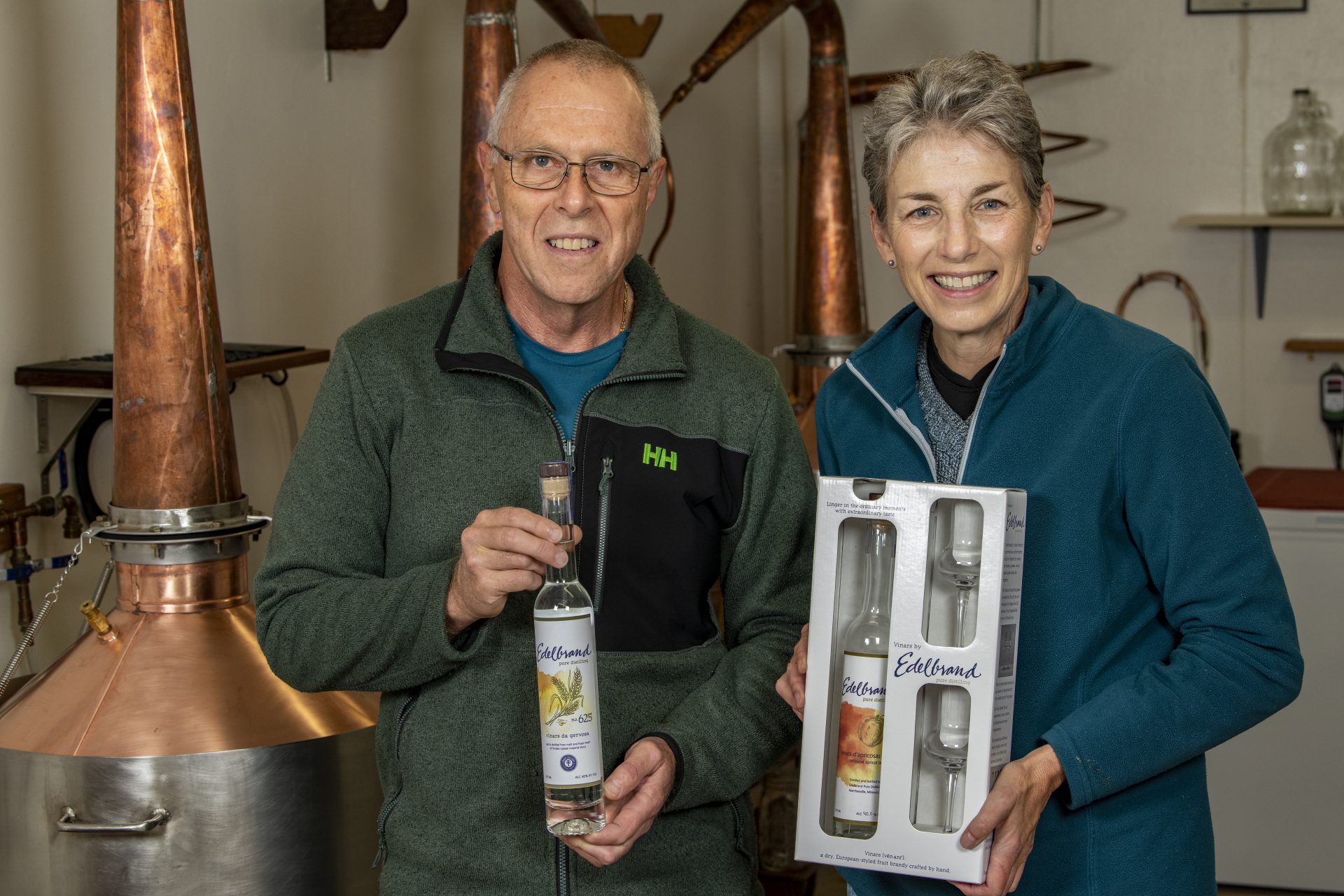 The spirit of Switzerland, made in Missouri

The Alps are a long way from Missouri’s Rhineland, but on the Marthasville farm of Martin Weber and wife, Lynn DeLean-Weber, a special elixir brings the magic of the Old World to Missouri.

Martin, a native of Graubünden, Switzerland, missed the distinctive fruit brandies, known as vinars, of his homeland. When a friend lent the Cuivre River Electric Cooperative members a 7-gallon copper pot still, they wasted no time. Nine years later, the husband and wife produce award-winning vinars from a 250-square-foot distillery. The end result is pure on the palate, but the process is far from simple.

“My husband is a mechanical engineer and he’s Swiss on top of it; only that combination could make it work,” Lynn says with a laugh.

Bearing their Swiss Romansh names, the six fruit brandies — pear, apple, grape, cherry, plum and apricot — are the most common varieties. Different from liquors where flavoring and sugar are sometimes added to the base spirit, vinars recreate the entire fruit in alcohol form. The skin, flesh and even the stems in the case of grapes add an aroma or flavor note to the finished product. In addition to capturing each fruit’s essence, Lynn and Martin also seek to pass on the culture of enjoying the spirits which Lynn refers to as the art of lingering after the meal is finished.

“In Switzerland when someone brings out a bottle of vinars distilled from their own fruit, it’s a real sign of pride,” Lynn says. “It’s an invitation to linger. That’s when the evening begins.”

Vinars production begins with ripe fruit. Apples and grapes come from orchards and vineyards in Missouri, while the rest is imported from the West Coast where growing conditions are more favorable. Most of the year, you can find Martin and Lynn across the cutting board from each other, grading, pitting and chopping whatever happens to be in season. In the fall, for instance, they’ll hand process 1,600 pounds of apples. Anywhere from 8 to 12 pounds of fruit make a single bottle of brandy.

“It all starts and ends with fruit,” Lynn says. “If you don’t have good fruit, you can’t make up for it with distilling.” 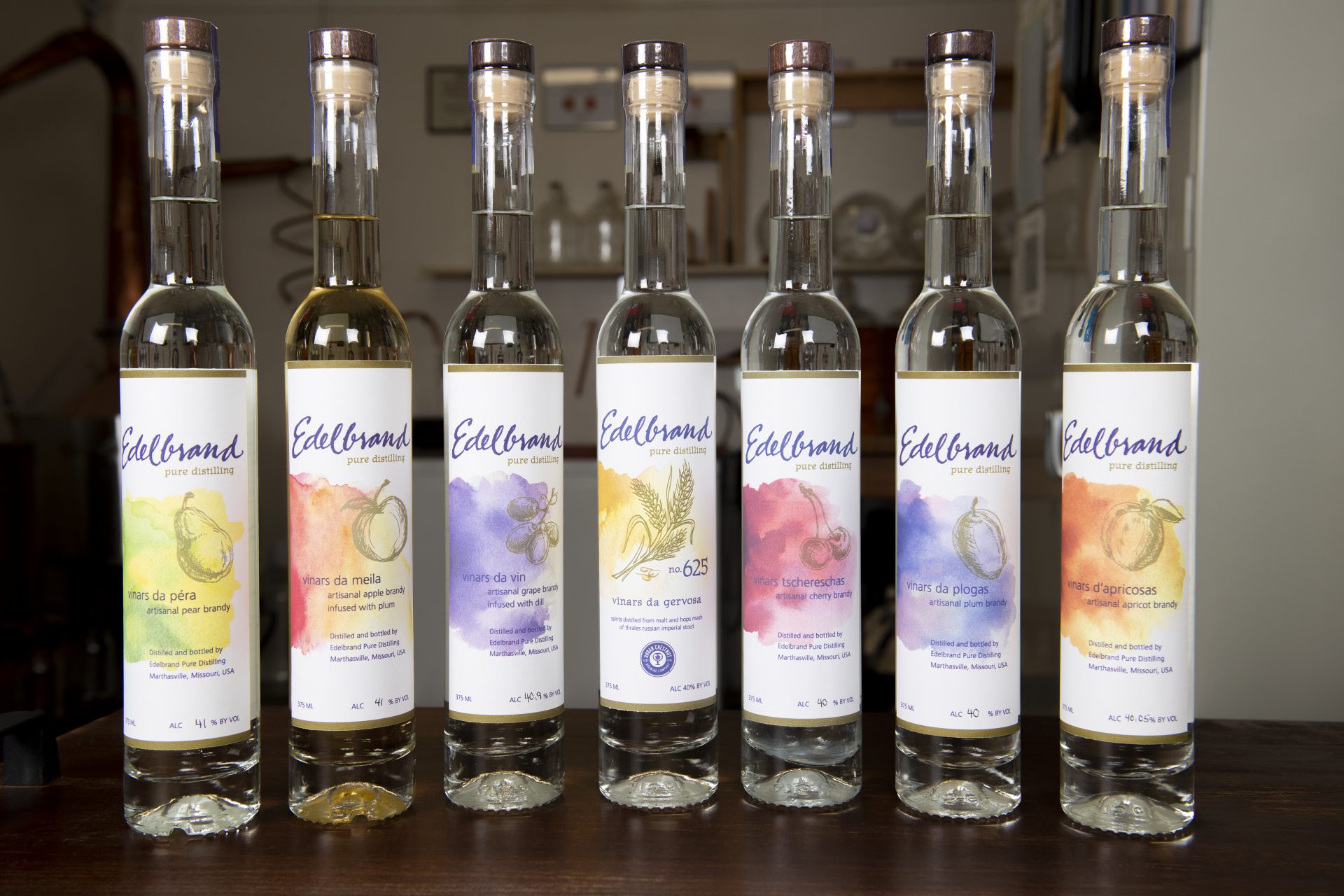 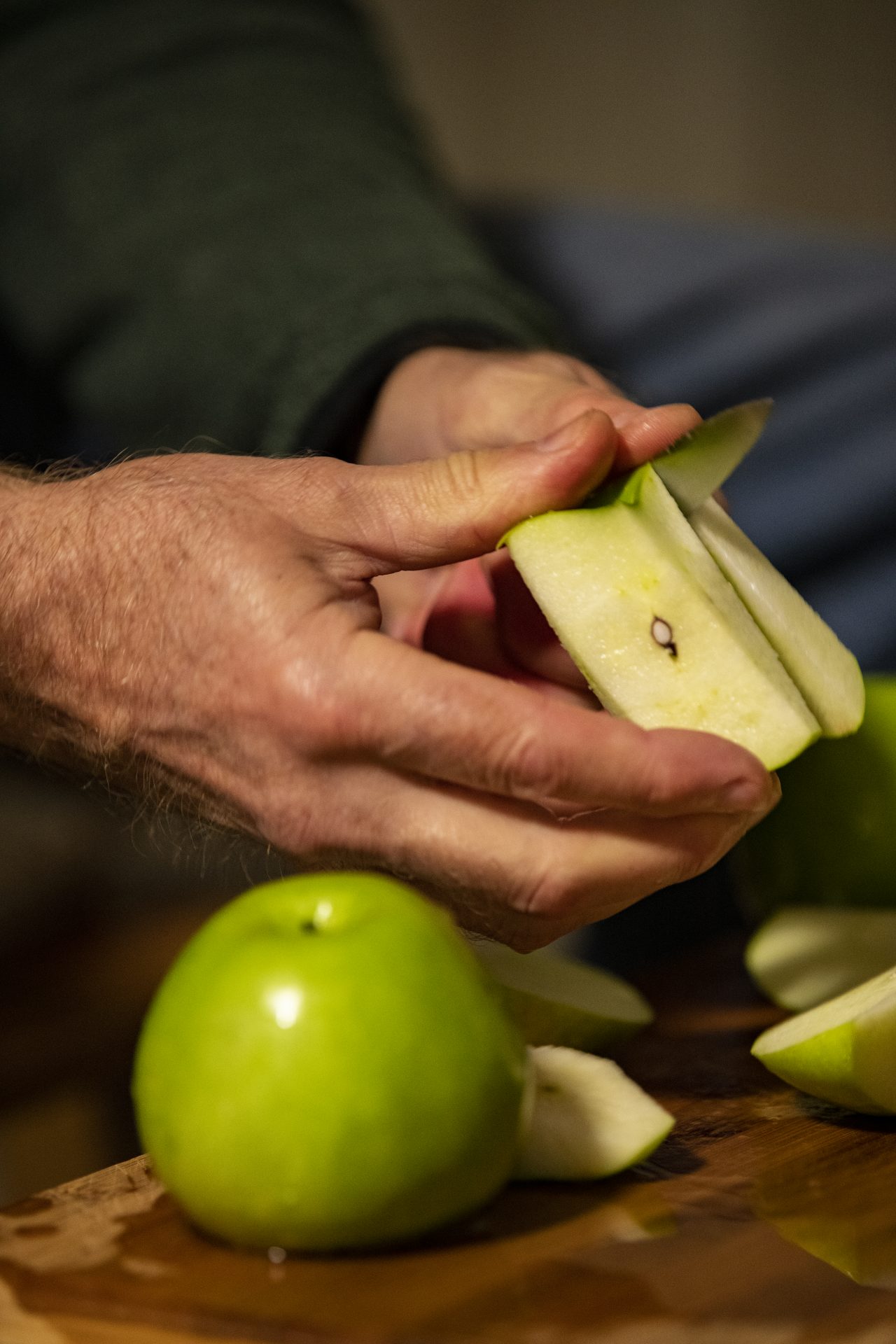 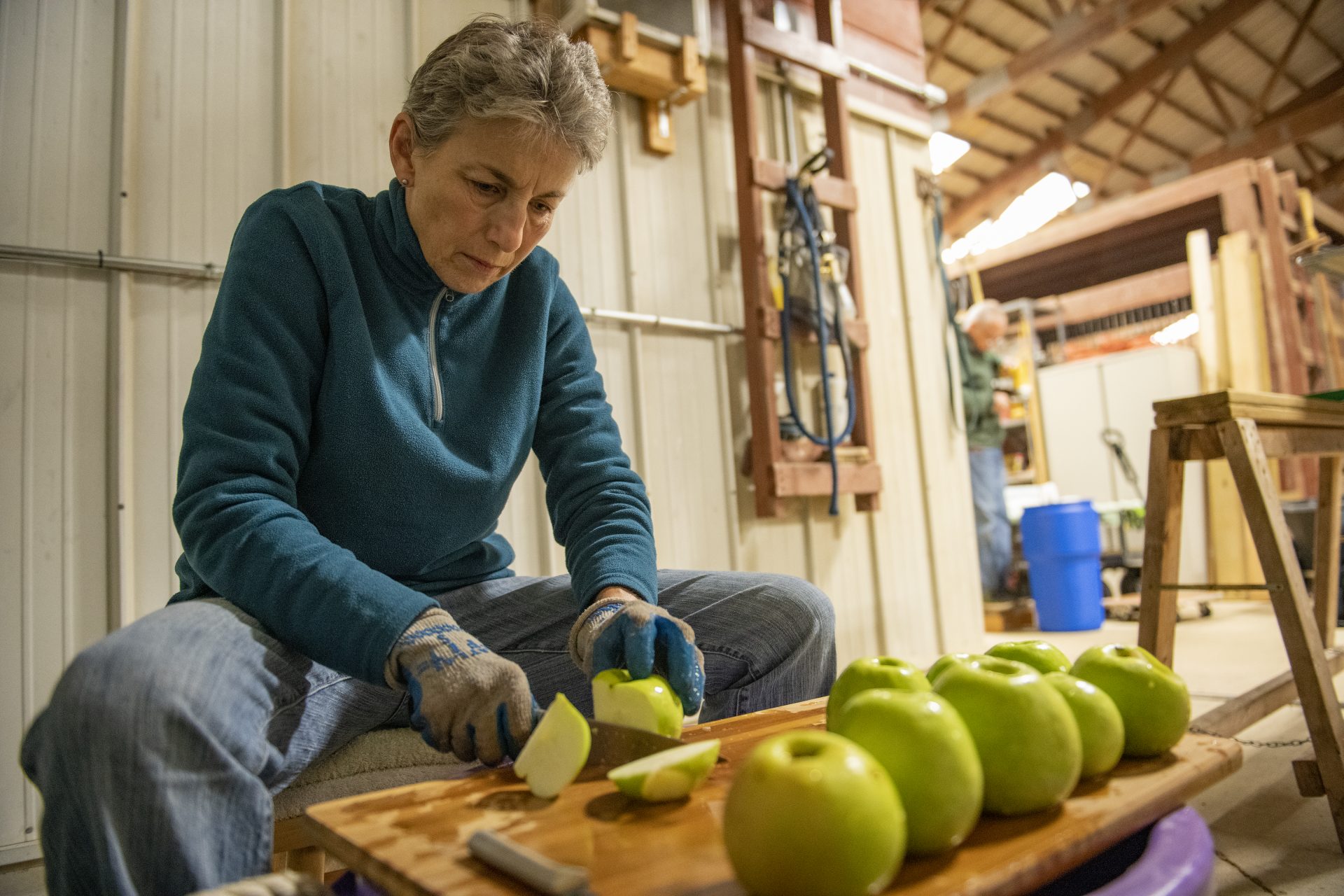 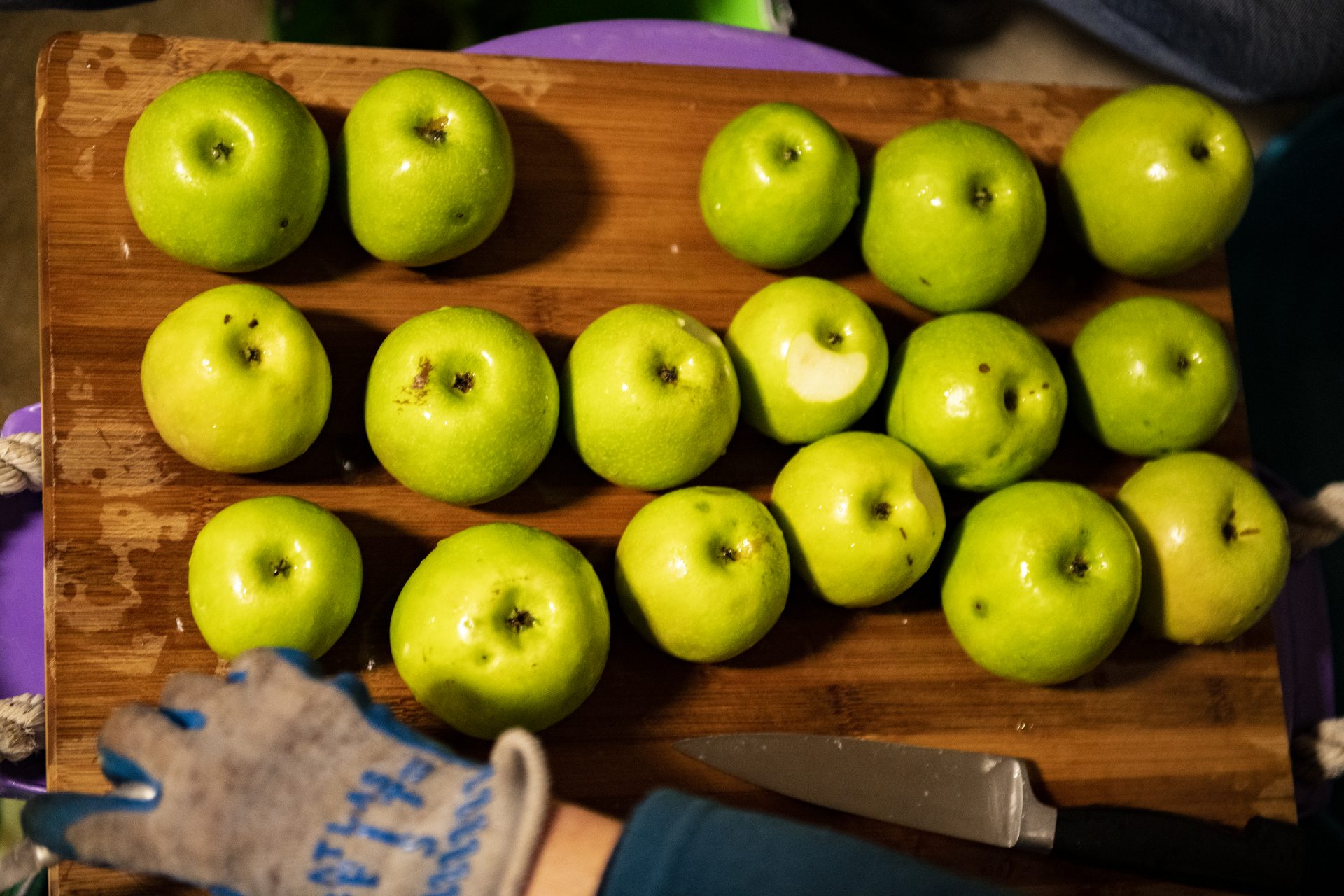 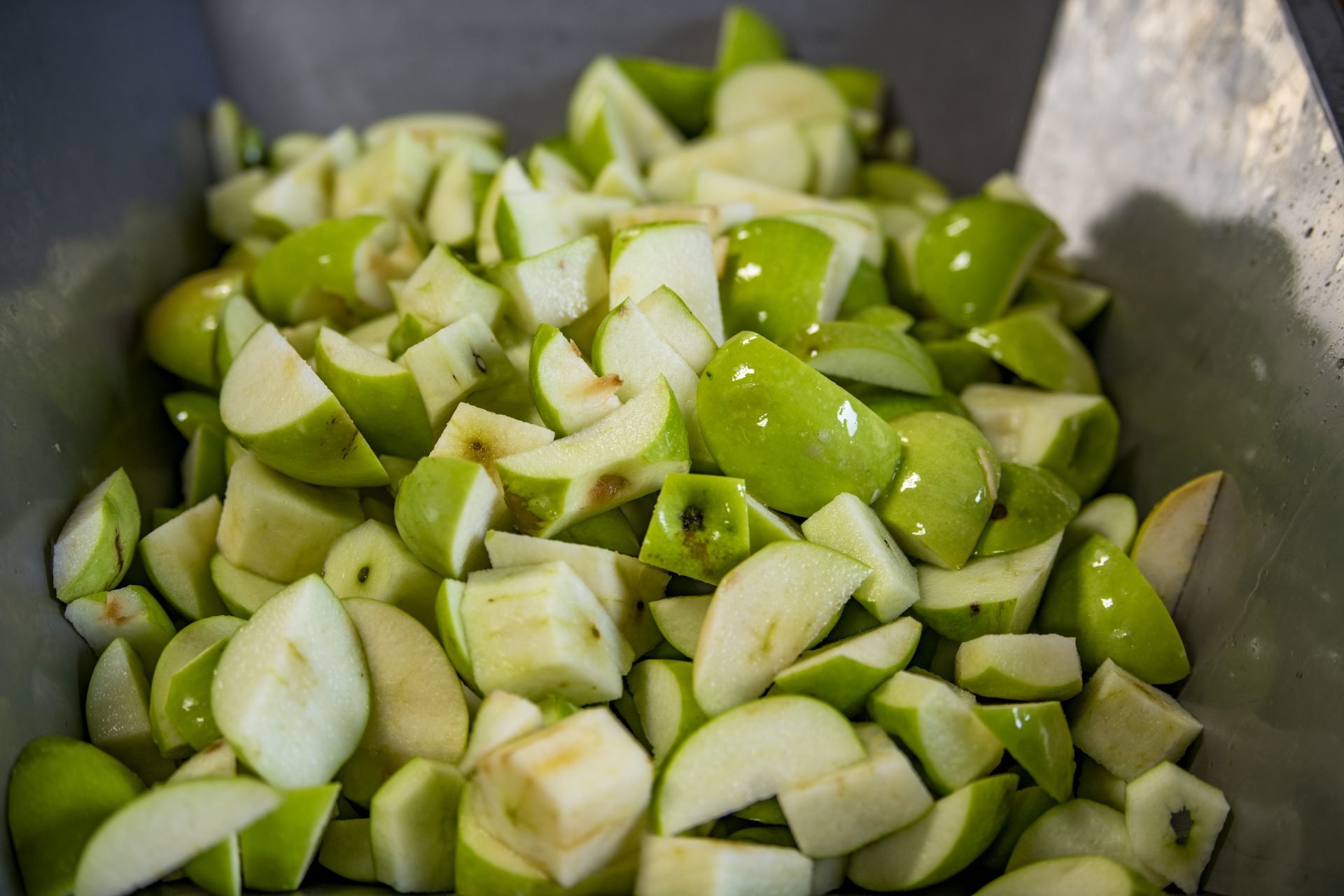 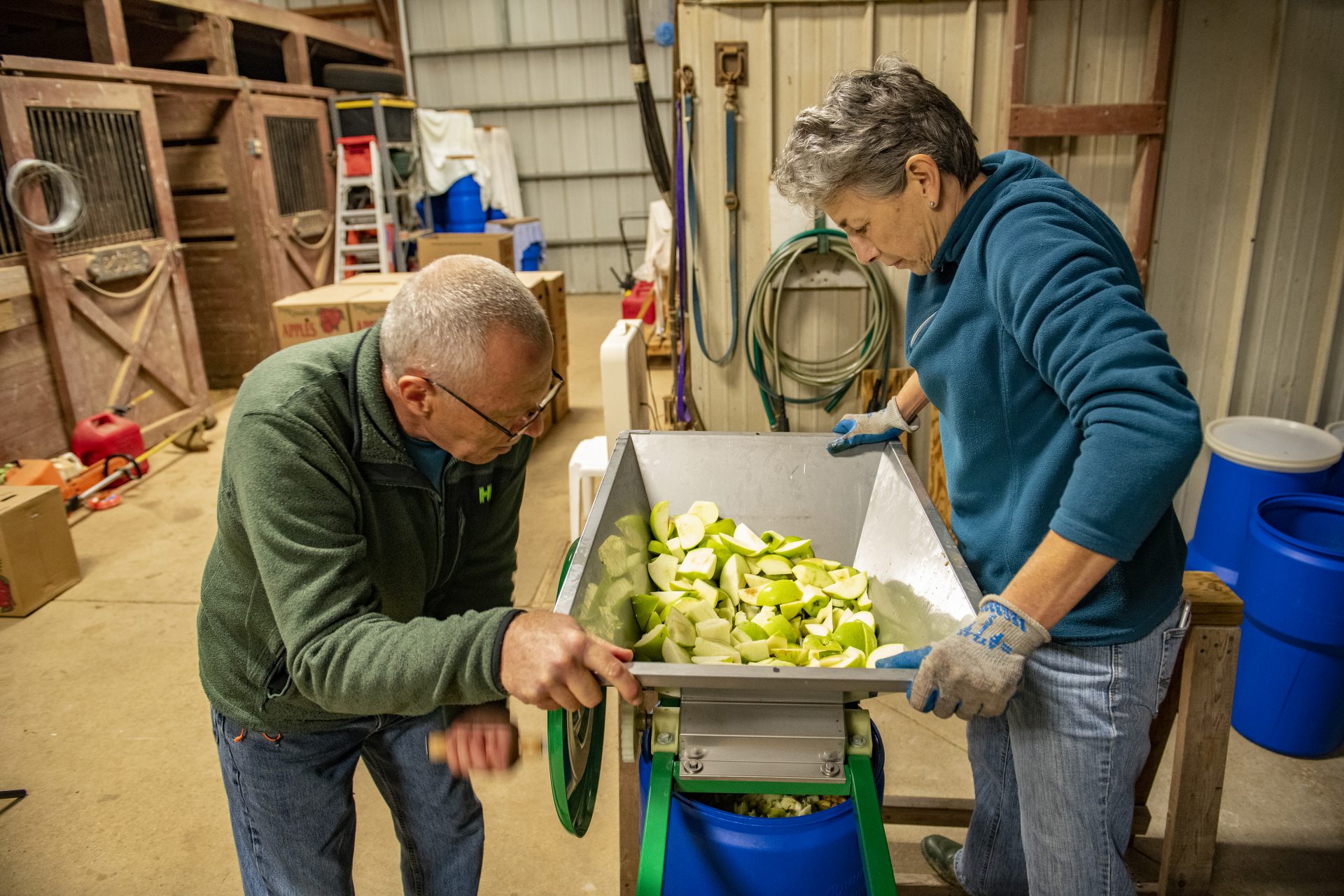 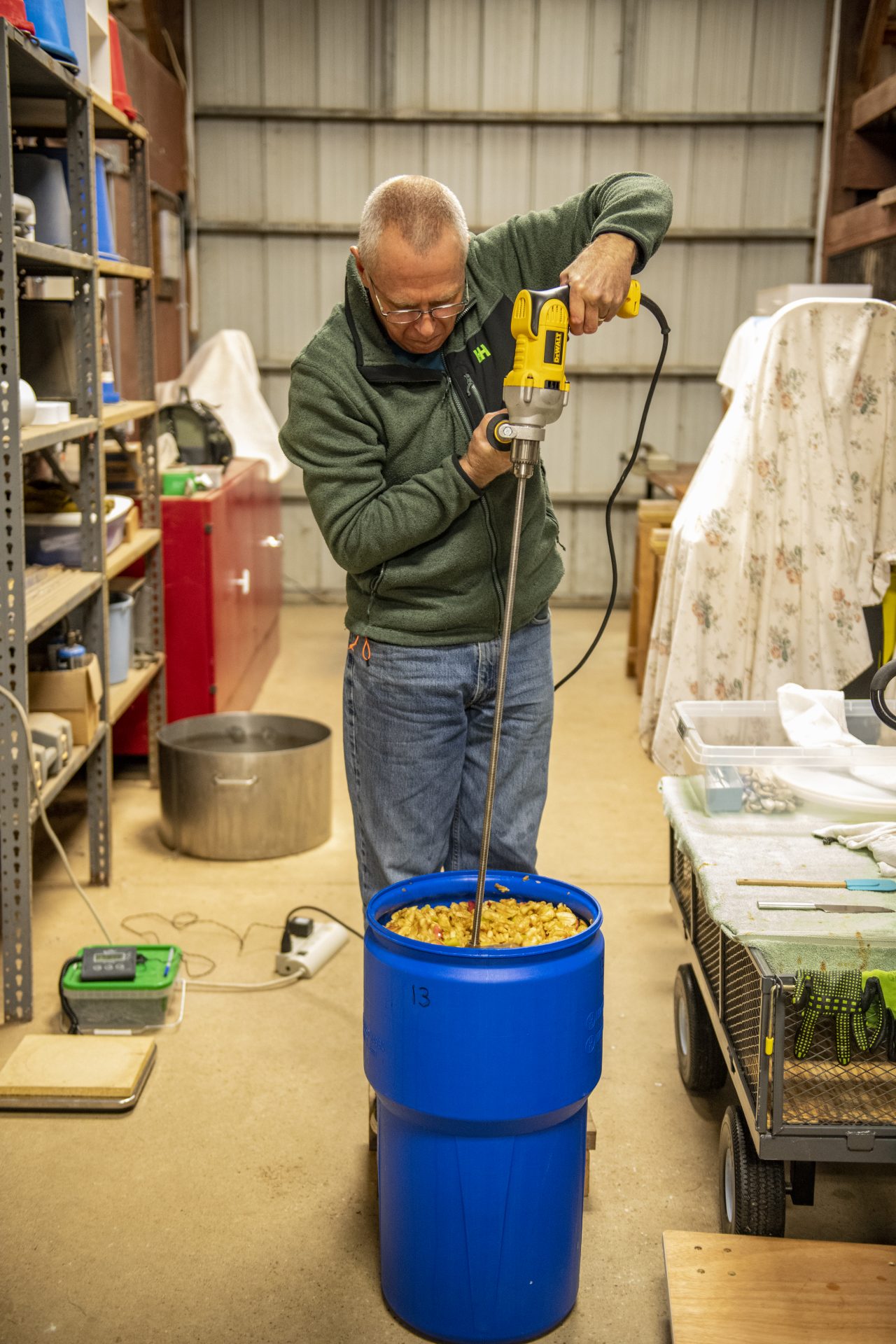 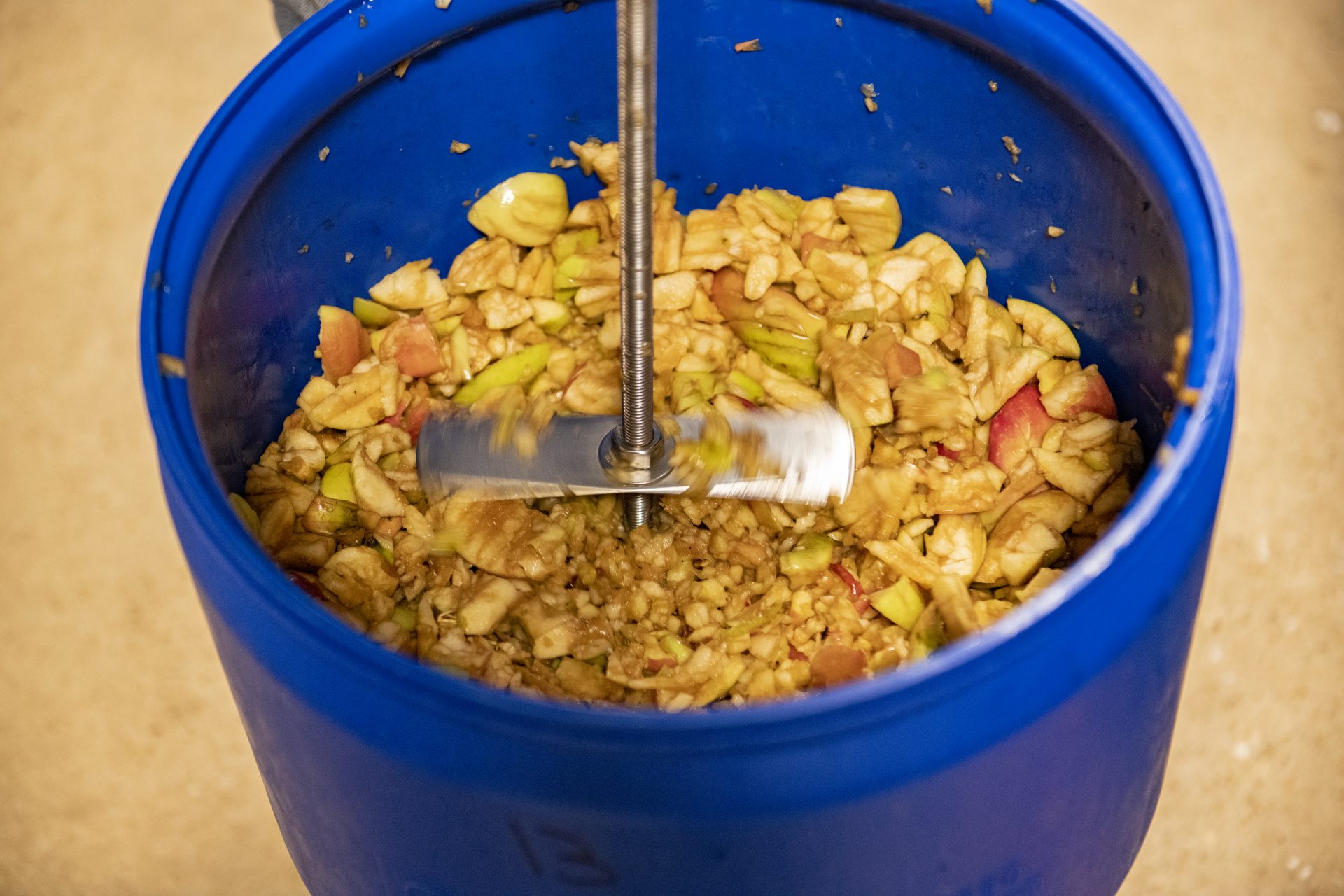 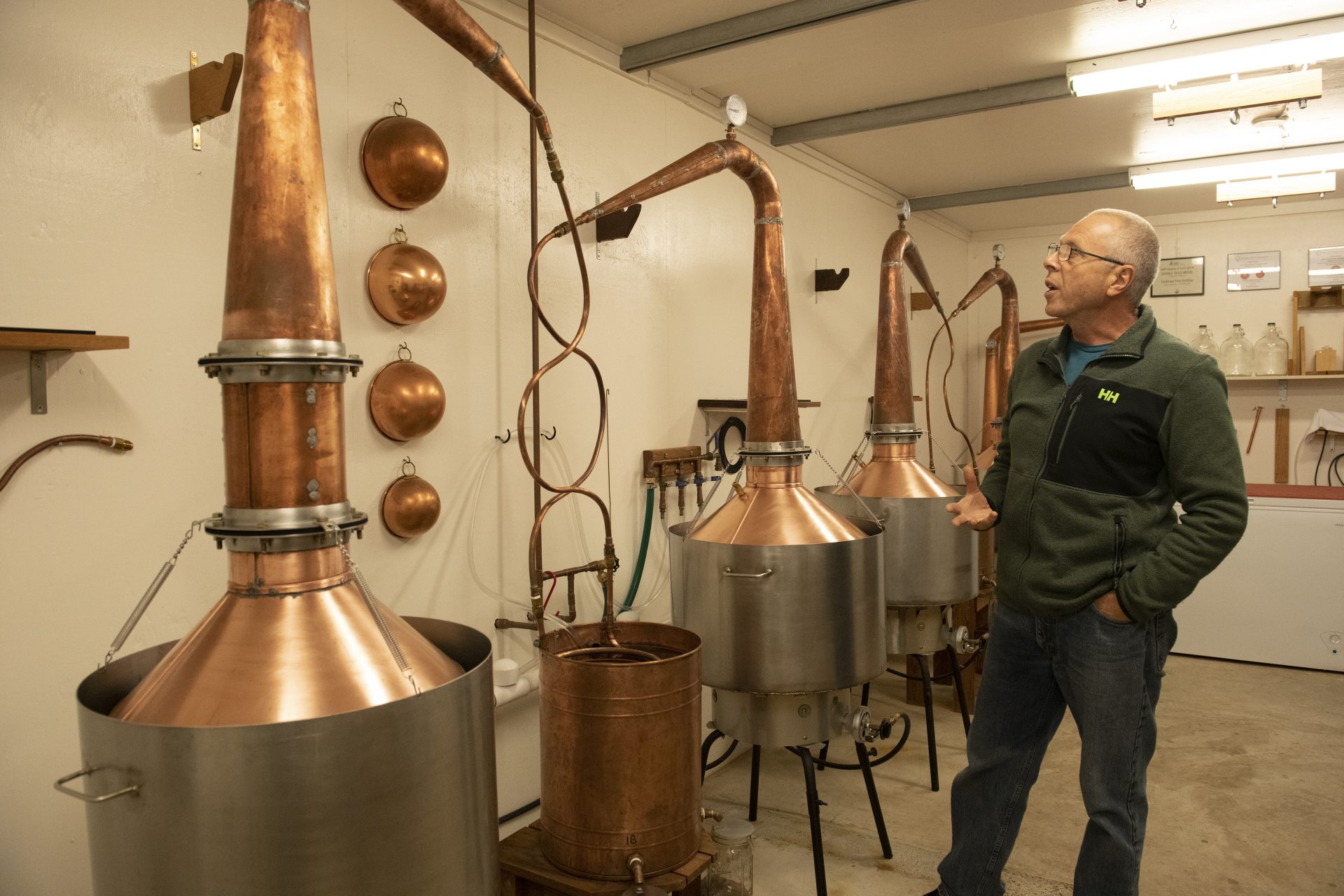 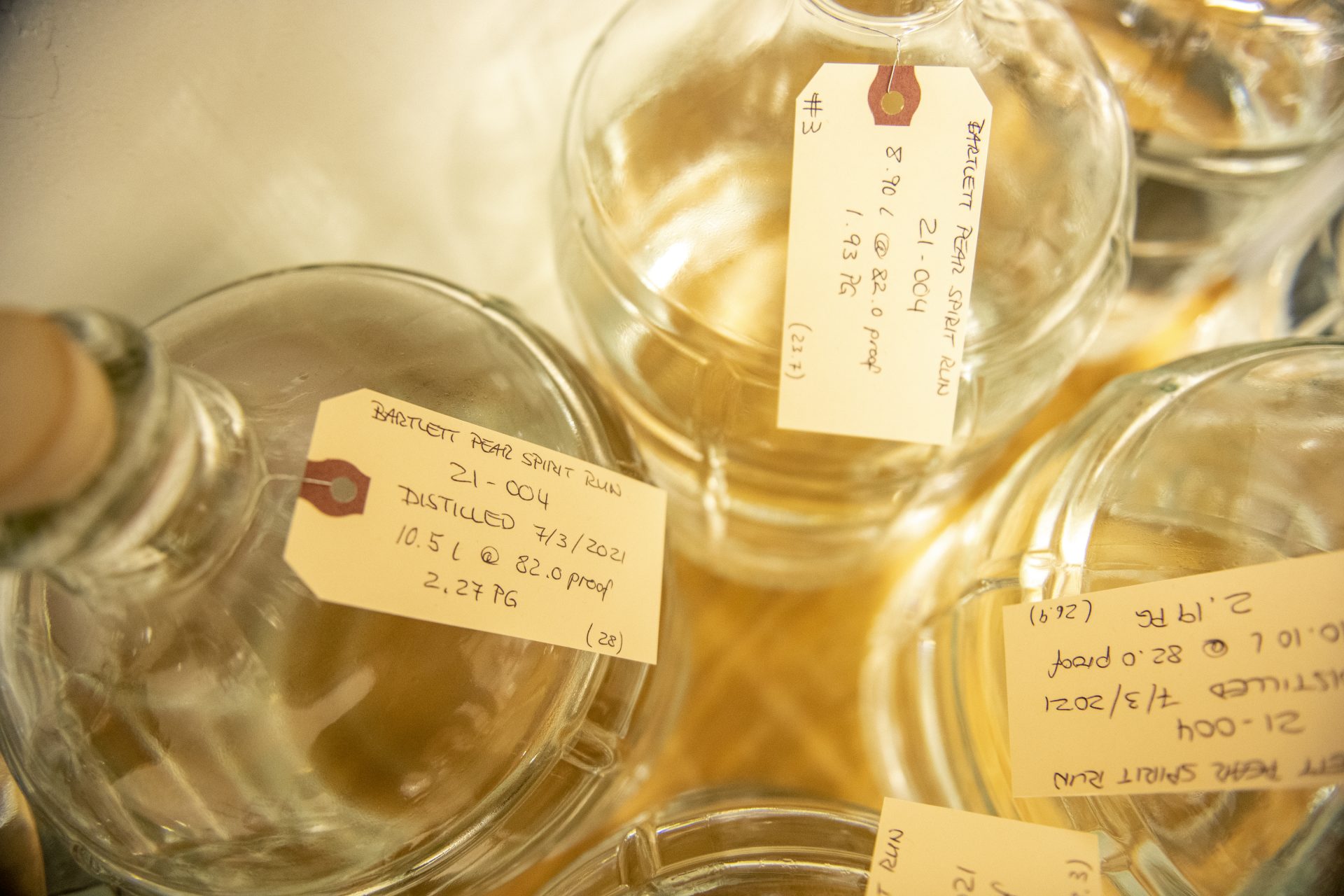 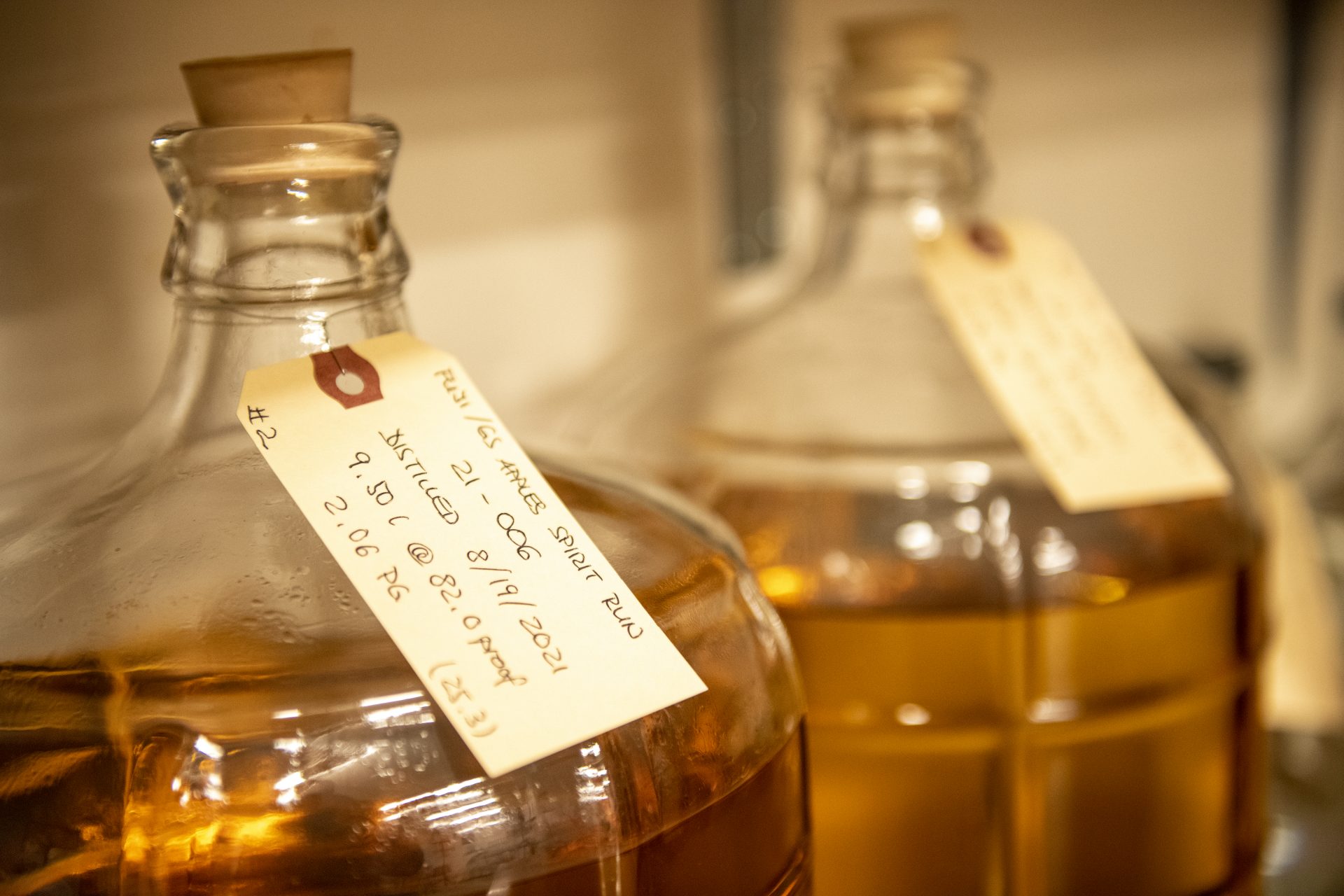 After the fruit is shredded, Martin adds yeast to the pulp and juice. This mash ferments for anywhere from five weeks to up to 10 months before being distilled.

“The key on fruit brandy is the slower you run, the more the aromas and flavors come out,” Martin says. “The challenge is being careful where you make your cuts.”

Edelbrand double distills its spirits, with the first run pulling the alcohol from the mash. During the second run, which can take between 10 and 12 hours, Martin closely watches the thermometer. Naturally occurring chemicals such as acetone, methanol and oils are separated from the alcohol at the beginning and end of the second run. Removing these bookends, called heads and tails, respectively, is part of the cutting process.

“What’s left is all hearts,” Martin says, which go through four-step dilution using filtered water. This brings the brandy around 40% to 41% alcohol by volume. It ages a year in glass carboys before being bottled for sale. The entire process is an intensive commitment to quality control, but Martin and Lynn wouldn’t have it any other way.

“Fruit brandies require attention to detail all along the way,” Martin says. “You can’t take shortcuts and expect to get those nuanced flavors and aromas in each bottle.”

The aroma alone transports the drinker to an orchard. An initial green note or bitterness akin to piercing the skin is followed by the honeylike sweetness of the fruit itself. Even the textures of the liquid vary from brandy to brandy. The delicate, complex nature of the vinars have been recognized by the industry, with Edelbrand winning Best Spirit alongside multiple medals from the Washington Cup National Spirits and Mid-American Spirits competitions. Three vinars have received gold medals from the American Distilling Institute, with the pear brandy receiving double gold in 2020 and 2021.

Without an onsite tasting room, Lynn and Martin self-distribute to package stores, restaurants and bars. The brandies have carved out a niche in Kansas City’s food and beverage scene, where mixologists use them in unique cocktails. Likewise, the husband-and-wife duo are never afraid to experiment. In November, Edelbrand released a new spirit, vinars da gervosa, in collaboration with Urban Chestnut Brewing Co. of St. Louis. The bierbrand or distilled beer uses Urban Chestnut’s Thrales, a Russian imperial stout, and is the first in a series called The Spirit of the Brewmaster. It’s a sure sign the time and effort the distillers invest in the vinars aren’t going to waste.

“That’s what we really wanted to try and do, was bring that tradition and culture here,” Lynn says. “Let’s introduce spirits to people that they may never get to experience elsewhere.”