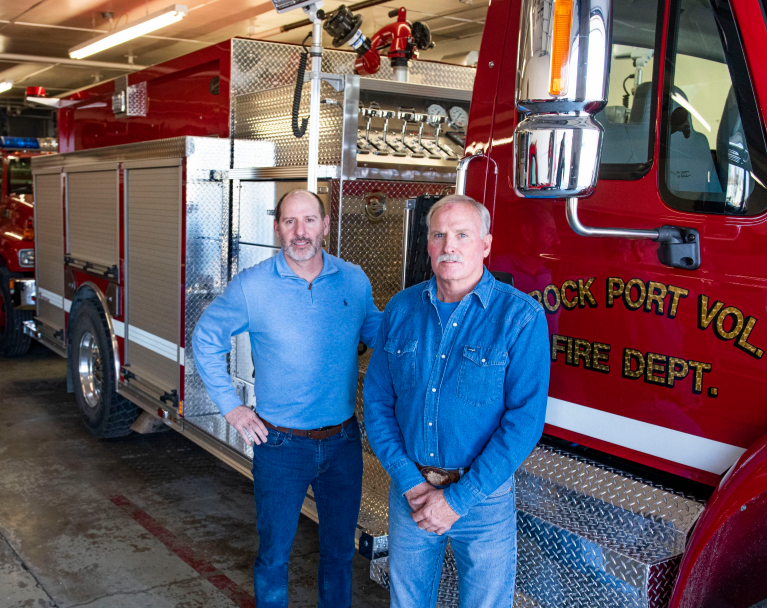 When a call comes in, Scott Jones needs all the help he can get. Whether it’s a small grass fire or an incident on nearby Interstate 29, Scott — the fire chief for both the Rock Port Volunteer Fire Department and West Atchison Fire Protection District — needs to make certain he has the manpower and reliable equipment to respond safely.

“We’re exposed to a lot of things in this area,” he says. “The better gear we can have, the safer we’ll all be.”

Nearby Atchison-Holt Electric Cooperative helps ensure those needs are met, exemplifying the seventh cooperative principle, “Concern for Community.” Through a combination of matching grants and employee policies, the Rock Port-based cooperative has helped the departments as well as other worthy causes that directly impact their membership in northwest Missouri and southwest Iowa.

One avenue the cooperative has used is the Sharing Success charitable giving program offered through CoBank, a Denver-based cooperative bank serving rural industries across the country. The bank gives its customers access to up to $7,500 — recently increased from $5,000 — per year. The money is matched on a dollar-for-dollar basis to address community needs.

“We’ve leveraged the Sharing Success program pretty successfully the past few years and certainly plan to in the future,” says Kevin Dechant, general manager of Atchison-Holt. “It’s a great program to help cooperatives be involved in the community.”

The cooperative annually makes donations to low-income home energy assistance programs in both Missouri and Iowa which is then doubled via Sharing Success. “We earmark it specifically for co-op members,” Kevin says. “Our board wanted it to help our membership.”

Atchison-Holt also has a symbiotic relationship with the Rock Port School District. When the co-op moved their annual meeting inside, the high school opened its doors for the membership to gather and do the business of the cooperative each July.

“We initially bought them a floor covering to use when we held our meeting in there,” Kevin says. “We recently wanted to continue to show our appreciation for them letting us use their facilities.”

The school’s track needed a new pole vault pit, which is not a small expenditure. With the matching dollars from CoBank, Atchison-Holt was able to direct $6,000 to the school to help offset approximately one-third of the cost.

While AHEC has raised money for the local fire departments, their support precedes any direct financial gift. “We have a good fire department here. I’d like to think we’ve contributed to that in some capacity,” Kevin notes.

Scott says rural communities with volunteer fire departments can face certain challenges. “As far as volunteers go, we have a lot of them,” Scott says. “It’s just issues with availability when a call comes through. It’s paramount that you get enough guys there.”

The cooperative has a trio of lineworkers and one recent retiree who are volunteer firefighters. If a call comes in when one of them are working and they’re in a place where they can safely get back, they’ll respond to the fire.

“I’ve got to thank all the employers who let their employees go like that,” says Scott. “When they leave, you don’t know if they’re going to get halfway here and turn right around or be gone for the whole day.”

Kevin says the co-op views it as an investment in the area in which they serve. “Our board members are in this community. They want to see everyone benefit from it,” he says. “And God forbid if our building ever catches on fire, it is going to be those volunteers that come and help us.”

That commitment continued following a prolonged fire at a nearby tire recycling facility in 2017. The combination of the tires and heavy wind resulted in a monthslong effort to fully extinguish the blaze.

The plant was located extremely close to a substation for N.W. Electric Power Cooperative, the transmission co-op that provides power to Atchison-Holt. The department’s work helped protect the substation from significant damage.

Battling a fire for that length of time wasn’t an easy task and spread resources thin. Later in the year, the co-op’s board of directors partnered in an alliance that, combined with Sharing Success, was able to deliver an $8,000 donation to department. “Any time we can get help from anybody, we’re more than excited to accept it,” Scott says. “It helps us buy better gear so we’re safer on the scene.”

Whether it’s helping hang holiday lights in town or making local donations, Kevin says the programs they’re involved in are born of the good nature and willingness to give often found in rural areas.

“It’s kind of like when you see a farmer is hurt or sick and every other farmer comes over and harvests their crops for them,” he says. “They’ve done that for probably 100 years and still do. It’s amazing what a close-knit bunch we are around here.”