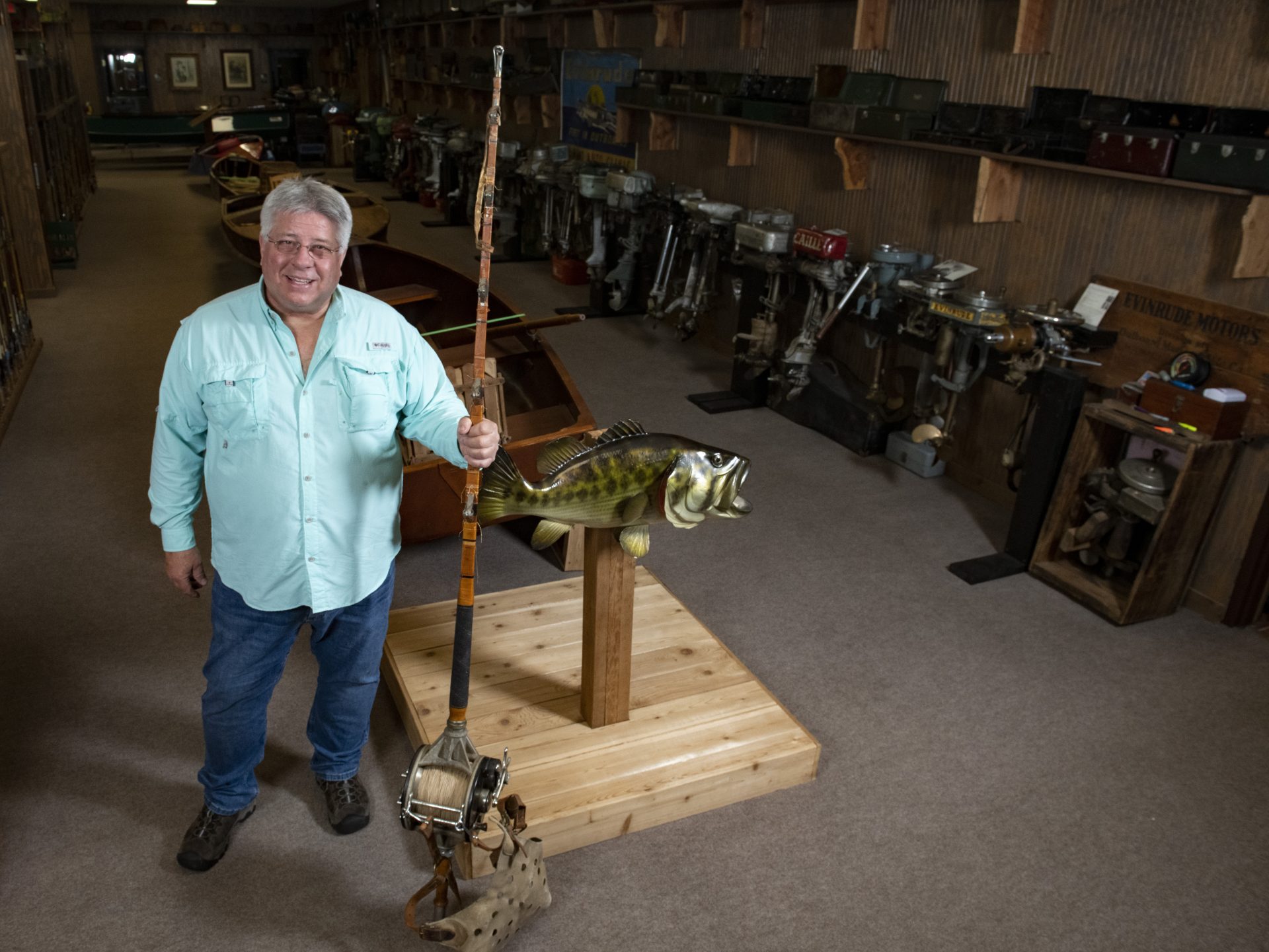 Branson’s History of Fishing Museum features a collection of lures and other items valued at $6 million. Curator Bill Bramsch makes a visit there more enjoyable with amazing stories about this vintage tackle and those who fished them.

For example: Zane Grey, author of 87 books, set 14 all-tackle deep-sea fishing records between 1924 and 1936. Perhaps the most impressive was his bluefin tuna, weighing 758 pounds and caught close to Nova Scotia, Canada in 1924. Another record was his tiger shark weighing 1,036 pounds caught near Sydney, Australia in 1936. His deep-sea fishing exploits were actually dangerous.

“Grey used what was then called a ‘widowmaker’ harness that slipped around the angler and hooked to the rod, not the boat,” Bill says. “Keep in mind that he was fishing for various species that outweighed his body weight many times. Several fishermen lost their lives when large fish pulled them overboard into the deep, blue sea.”

The author, once a college athlete, had enough strength to stay on board while fighting huge fish. The reel — with two star drags plus the hickory rod — weighs 50 pounds.

“I love sharing these stories,” Bill says. “People that don’t fish enjoy the stories. Those who have fished for years discover a lure or a fishing fact they never knew existed, and children just starting their angling journey leave fascinated.”

The museum’s exhibits, owned by Karl and Beverly White, represent 75 years of collecting the history of angling. Some of the oldest items are Buel Trolling Spoons that were patented in 1852. Julio Thompson Buel, born in 1806, loved to fish. During a bait-fishing trip, he ate his lunch while his boat drifted. The boat bumped against a rock, causing him to drop the spoon he was using into the lake. He watched the spoon spiral down toward the bottom and was surprised to see a large fish swoop down and grab the shiny object.

“Legend claims he had longed to catch one of the large trout he’d been told existed in the lake, hurried home and snatched another spoon,” Bill says. “He sawed off the handle, soldered a hook to the concave side, and drilled a hole in the handle stump. Next day he tied a line to his creation and put it in the water, rowing back and forth across the lake until he’d caught a large trout and then a second trout with his new trolling spoon.” 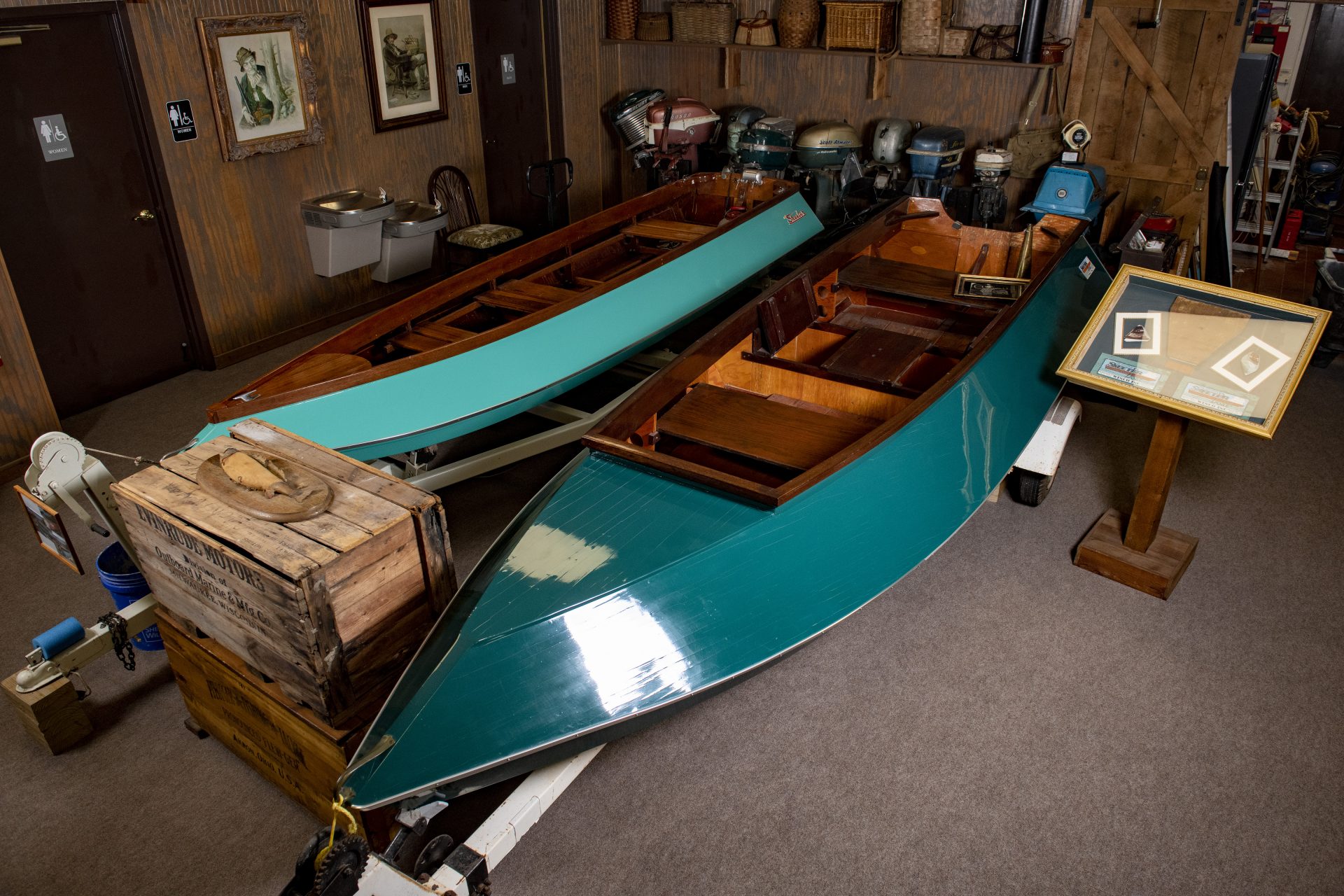 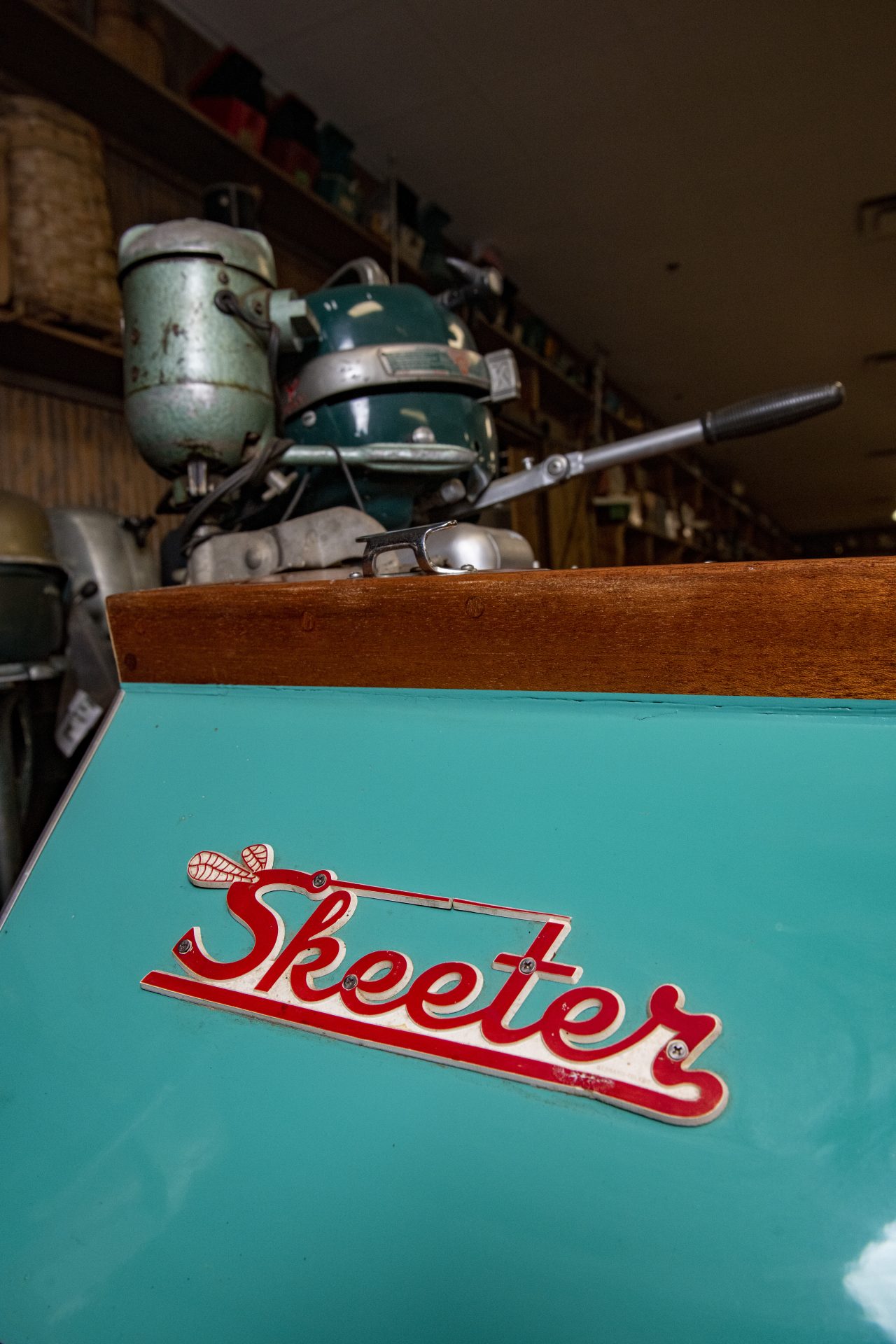 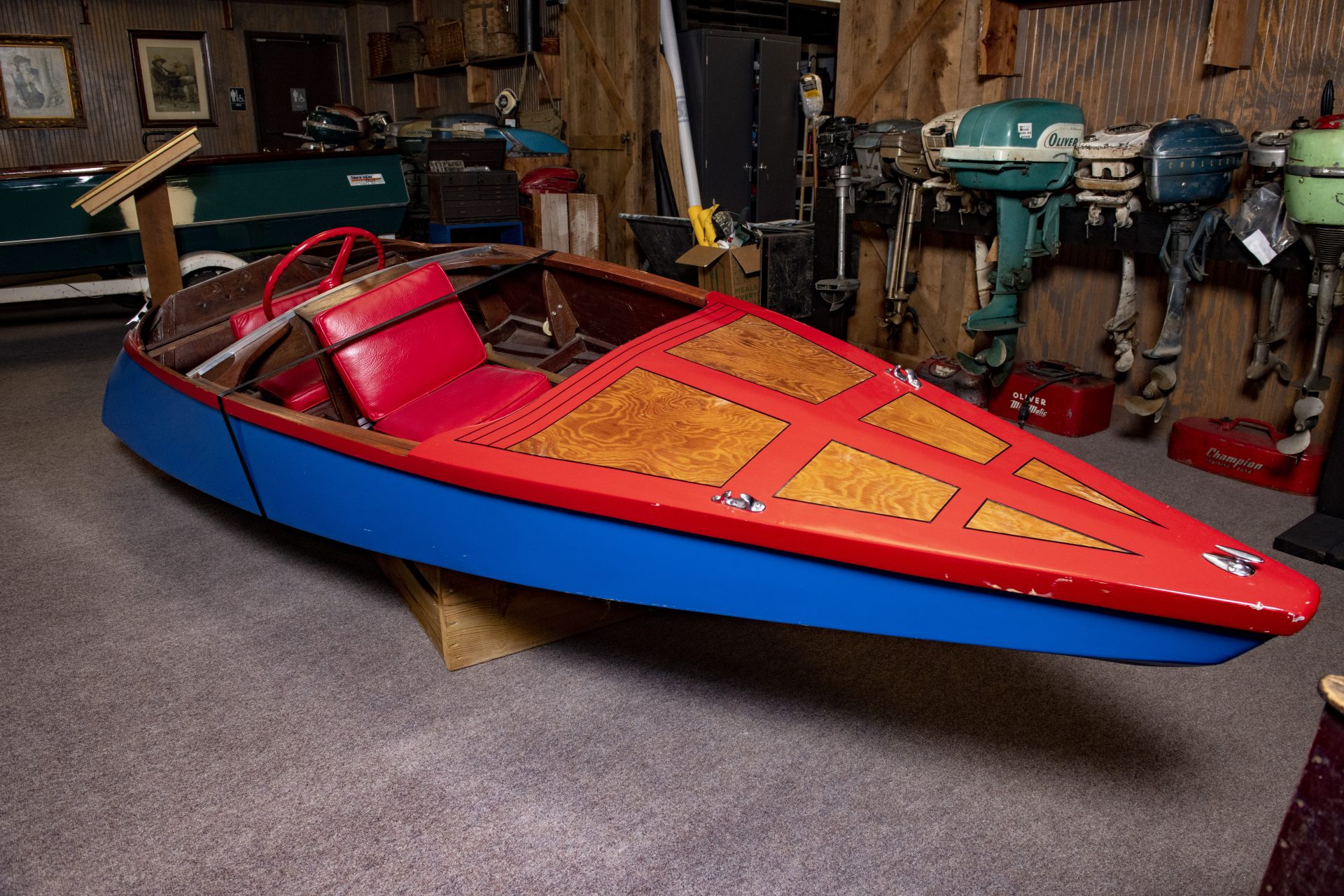 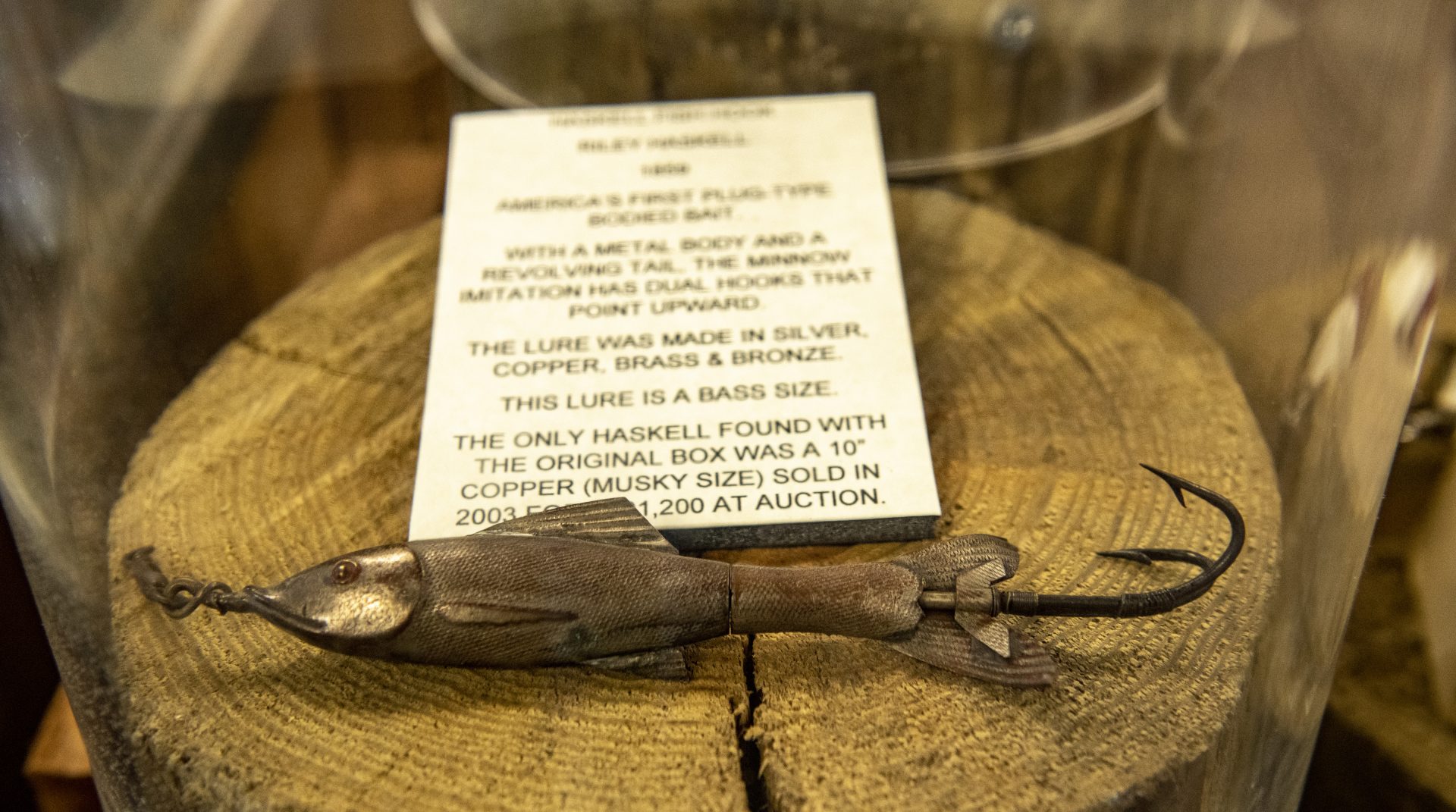 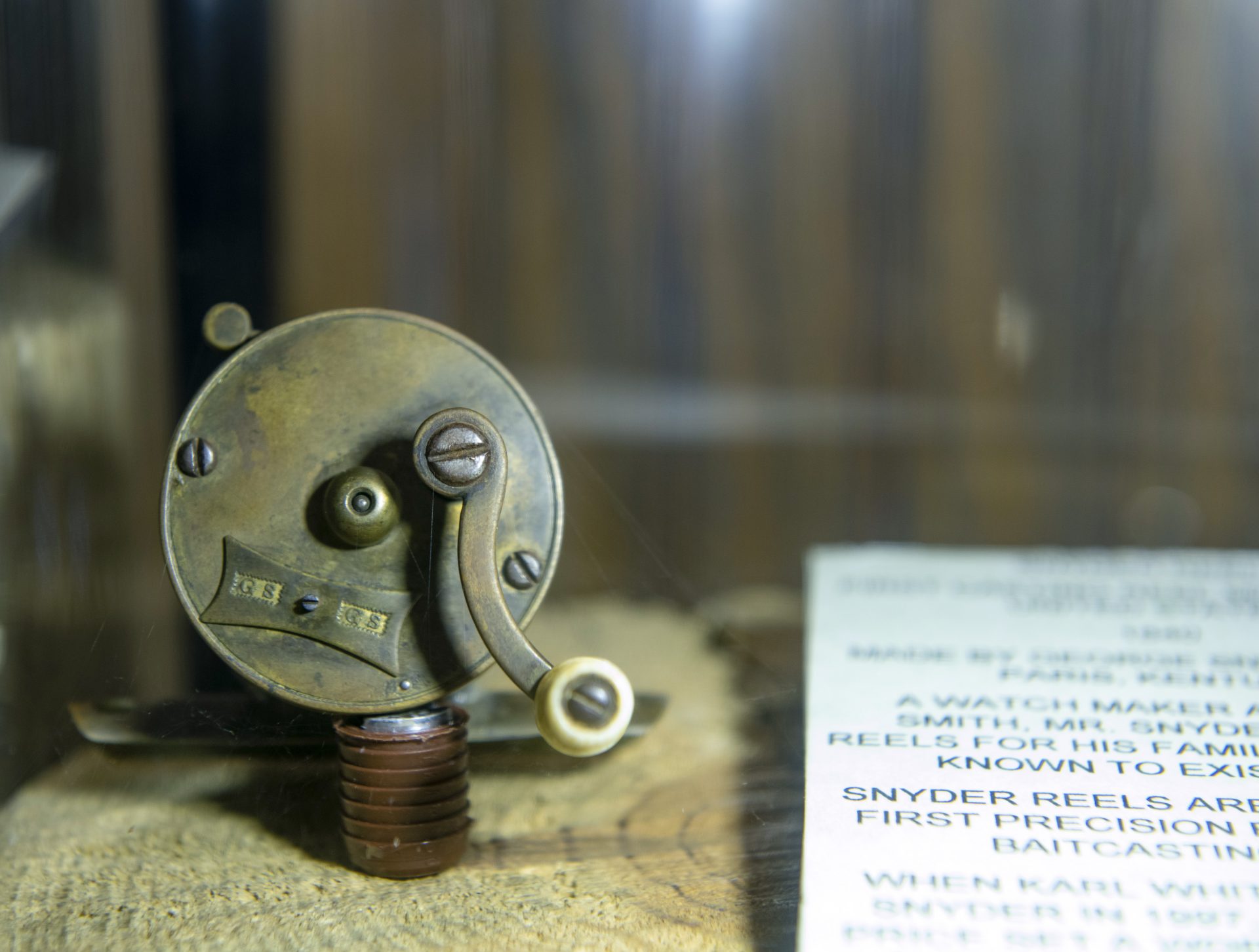 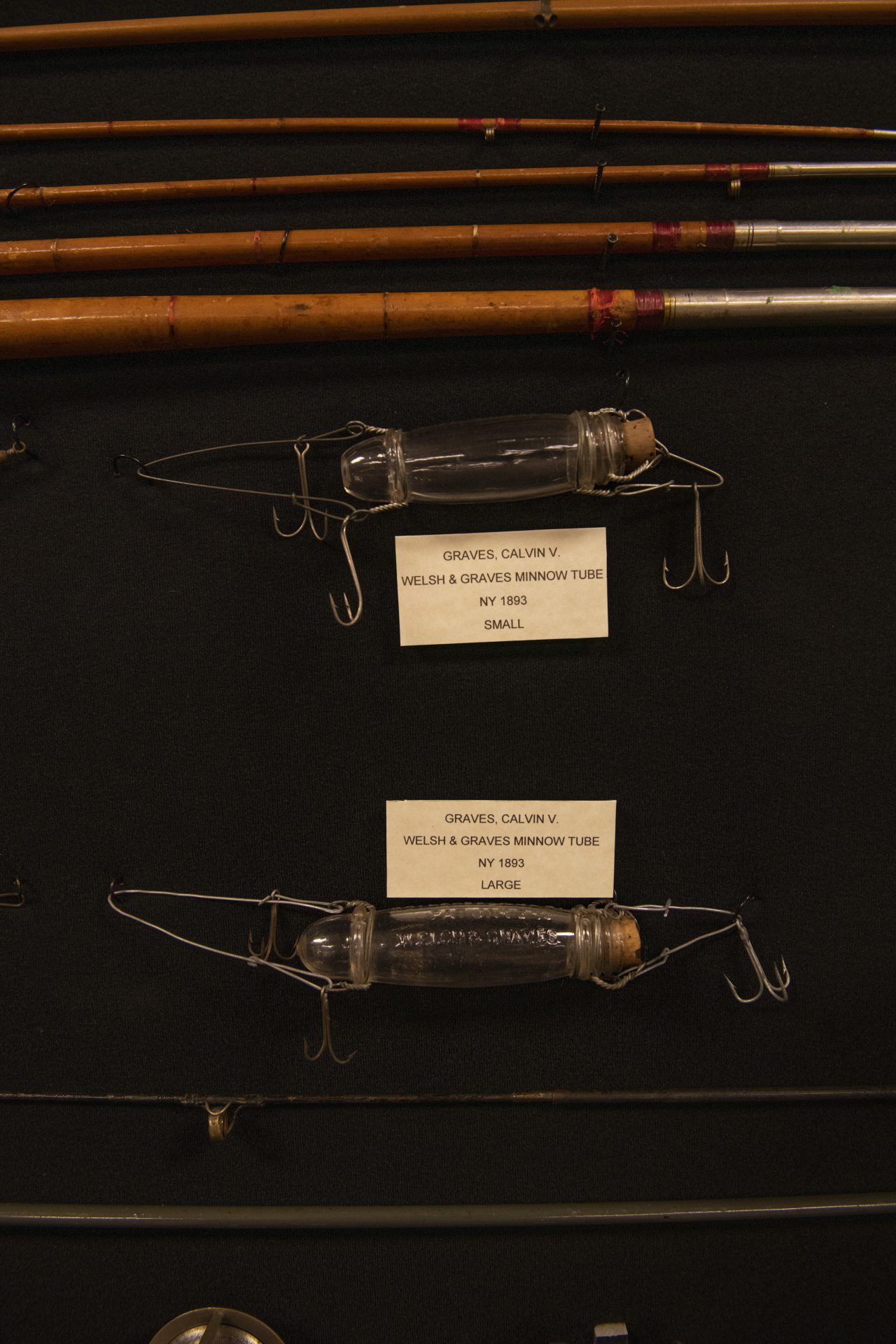 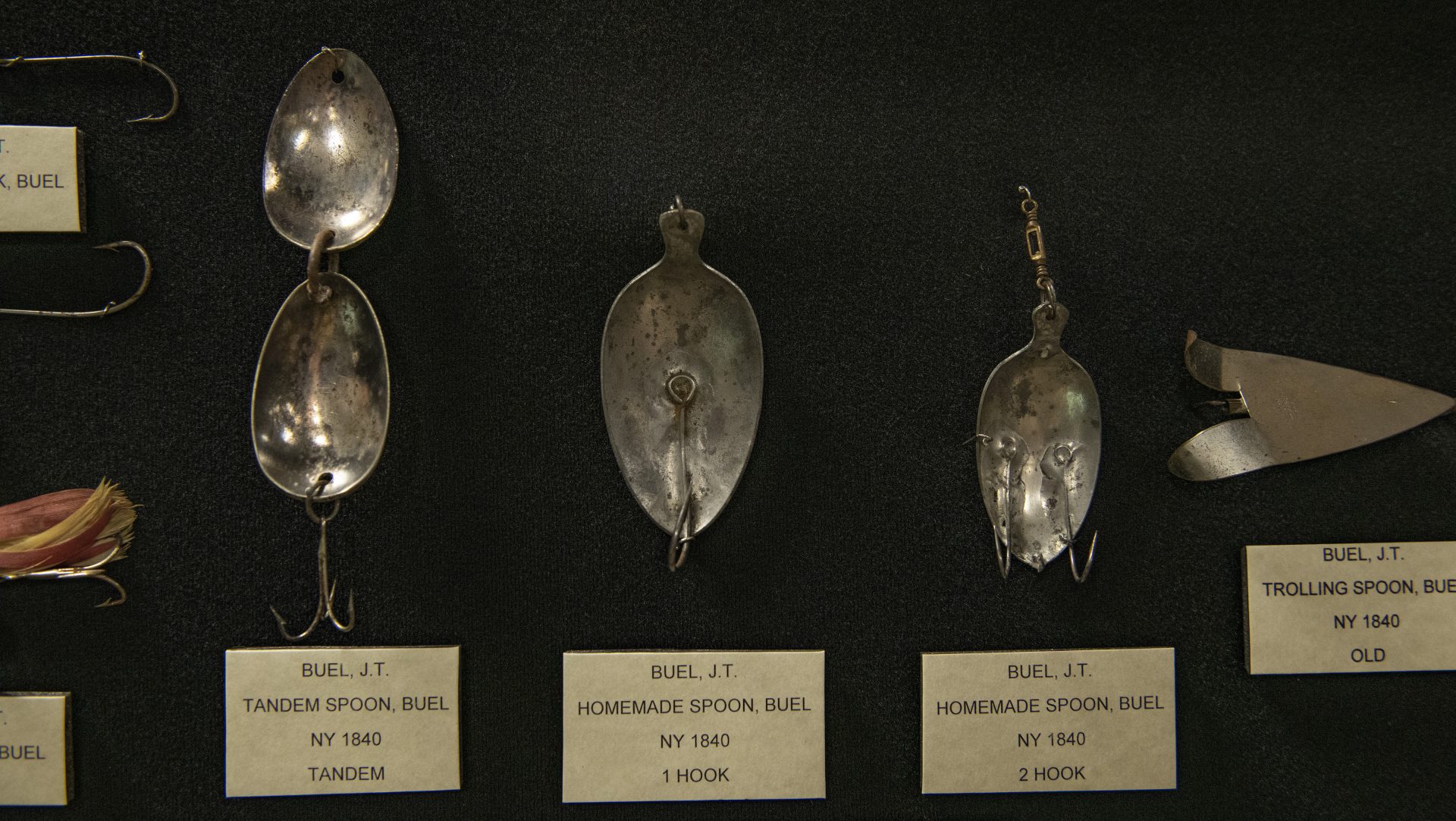 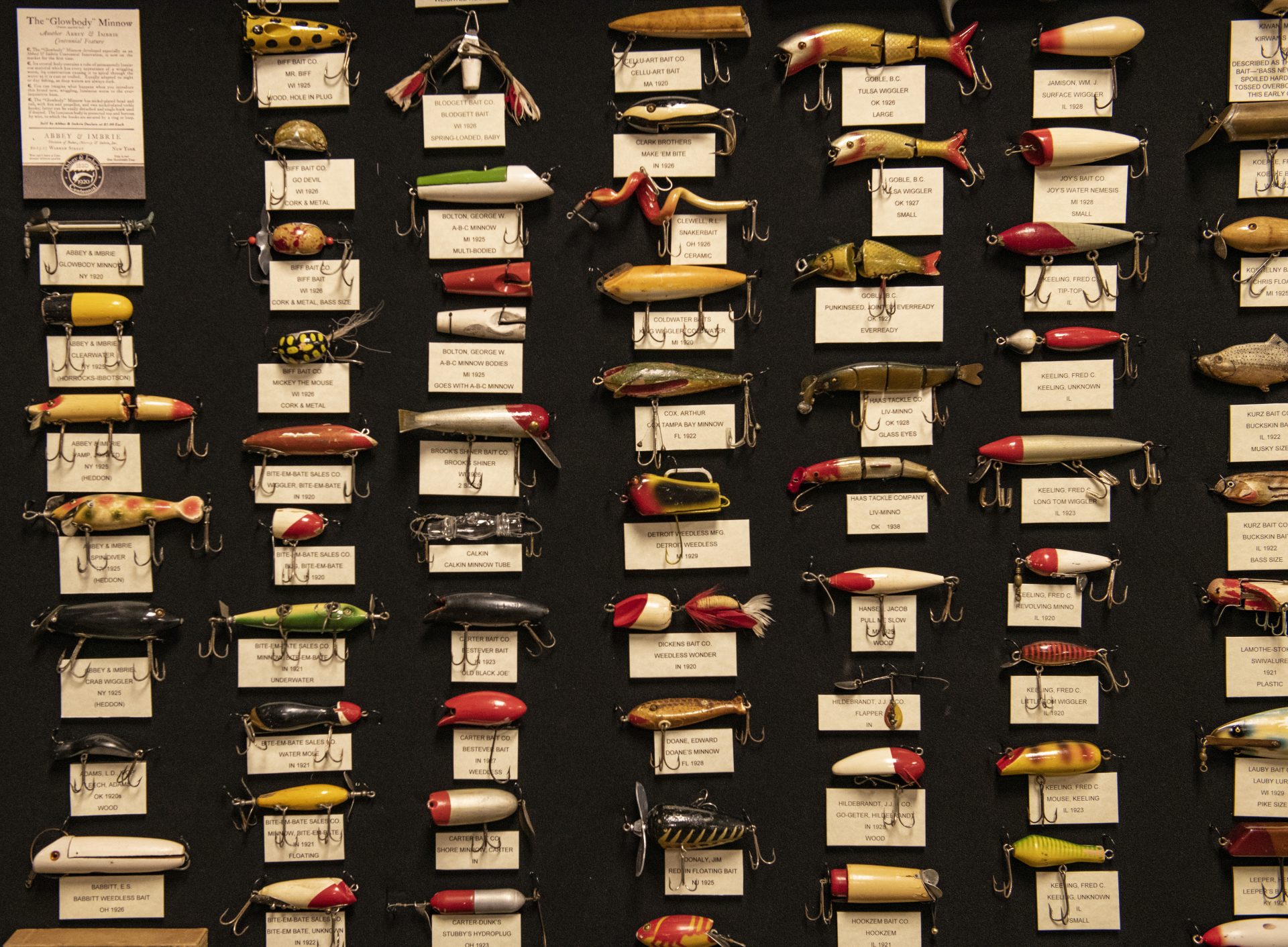 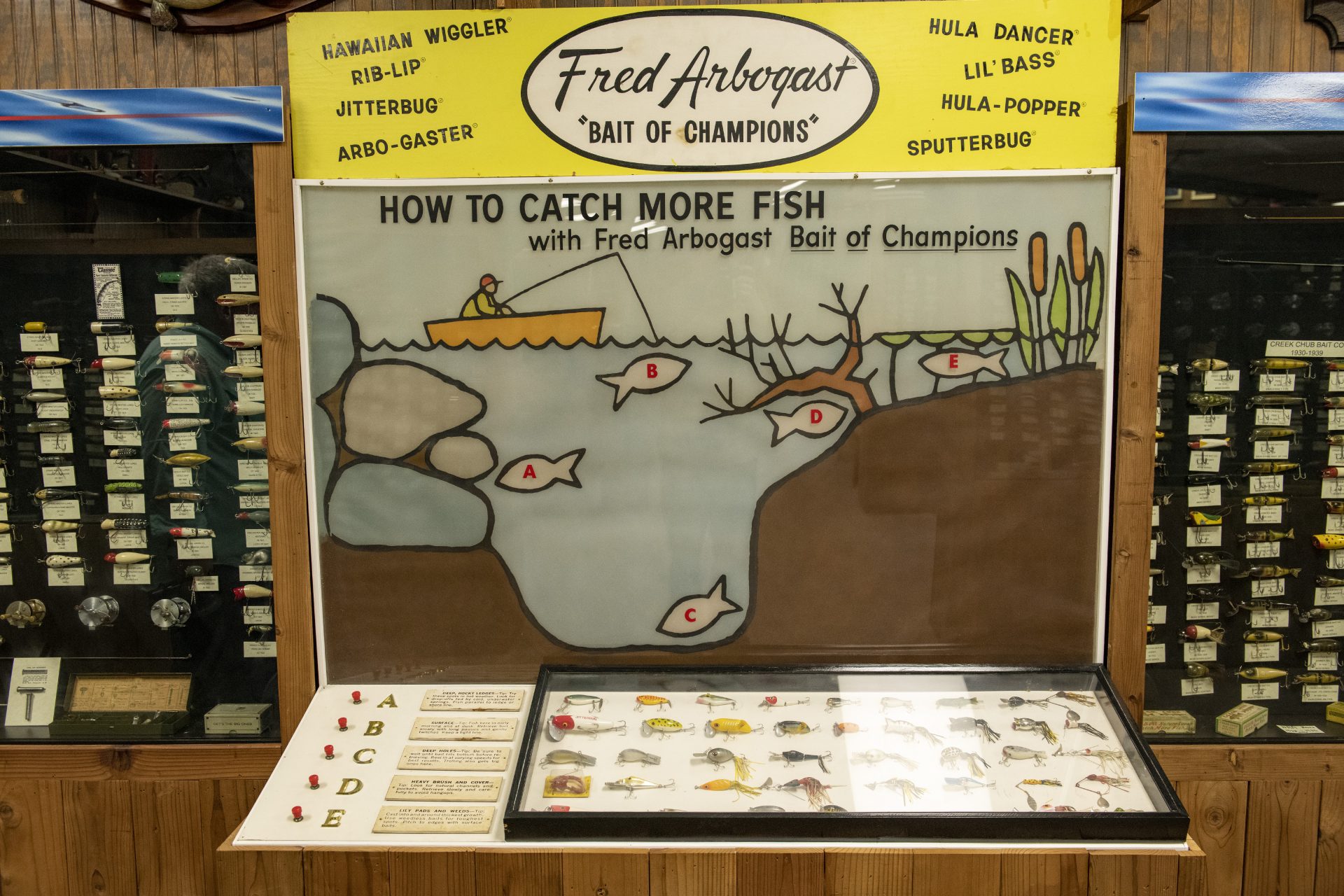 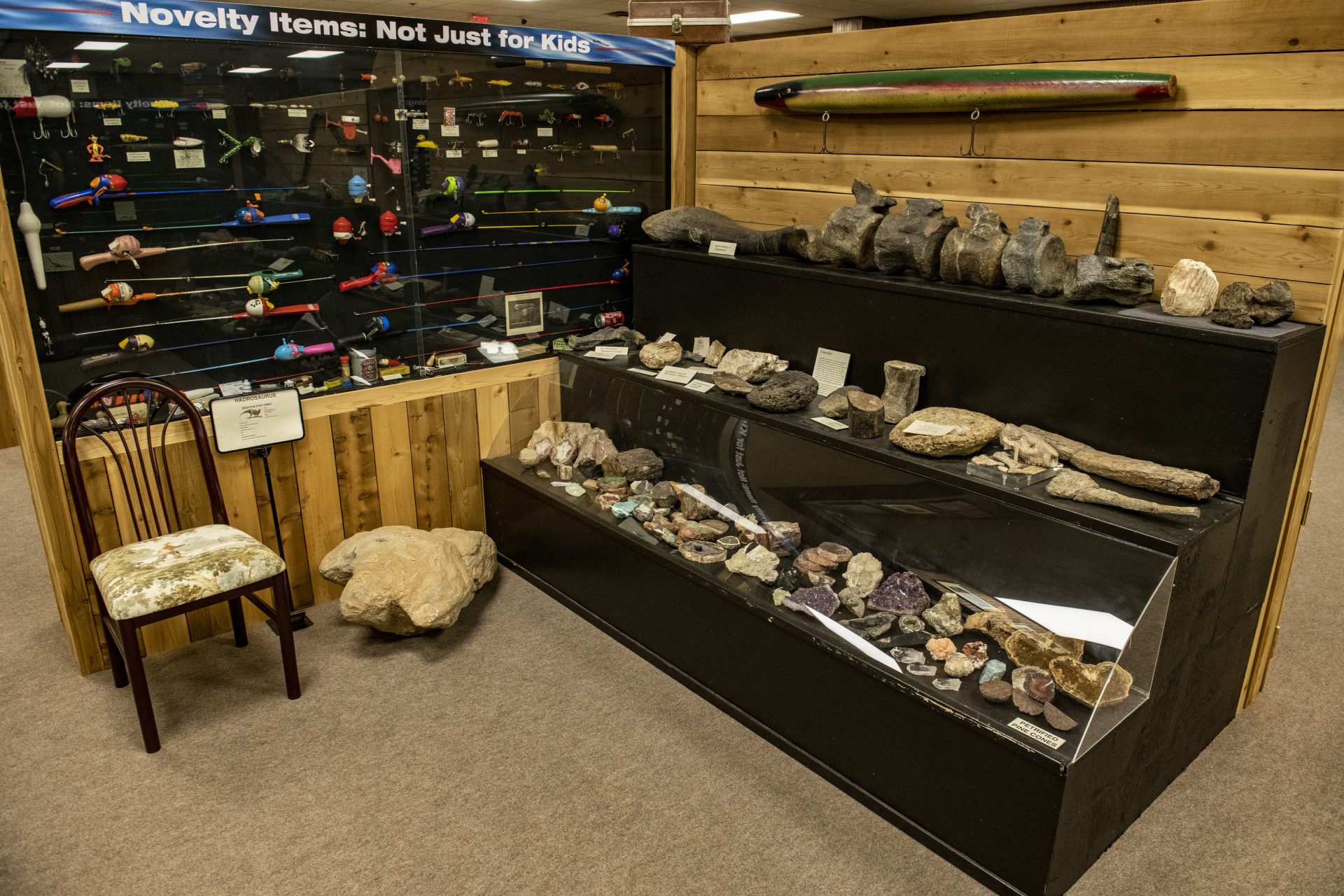 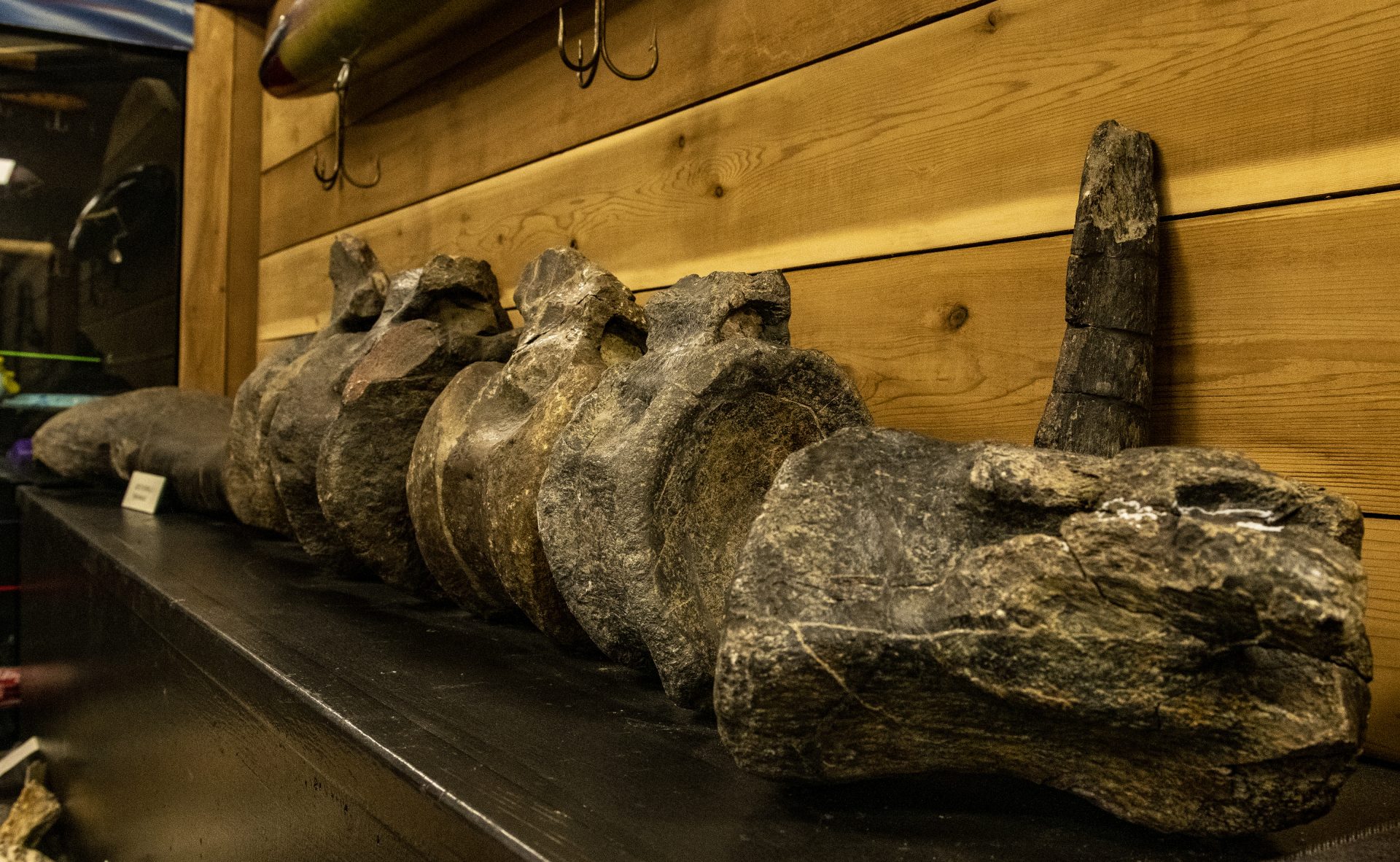 Julio started making lures for other anglers and eventually opened a shop to sell the first fishing spoons. He crafted spoon-shaped blades out of nickel silver, painted the convex side red, and attached treble hooks and feathers. By 1827 he continued to craft his lures and improve them, but he only sold a few.

His fortunes changed when sports writer Frank Forester wrote about the spoons in his book “Warwick Woodlands” creating an overwhelming interest in this angling breakthrough. J.T. transformed his furrier business into manufacturing fishing lures in 1848, and the fishing spoons we use today were born.

“Like any industry, some stories are sad,” Bill says. “Lures like the Pontiac Radium Minnow were hand painted and part of the delicate work entailed moistening the tip of the brush between the lips to paint better details. Artists used a luminous paint that contained radium, the same that was used on watches and compass faces.”

This dangerous paint glowed in the dark without being exposed to light and was radioactive and deadly if ingested or inhaled as fine dust. Many that used these paints eventually died horrible deaths. Rumor has it that a Geiger counter will tick over their graves this many years later.

Other items from this world-class collection include spike reels from the 1730s, which were among the first ever made in Europe and later used by American anglers.

“The Snyder Reel from 1840 is the first casting reel made in the United States by George Snyder from Paris, Kentucky and one of our most rare pieces,” Bill says, adding the reel is one of only four known to exist among collectors. “Mr. Snyder, a watchmaker and silversmith, made 12 reels for his family.”

Another first is the Haskell Minnow made by Riley Haskell in 1859, which was the first American plug-type bodied bait. The metal body designed to replicate a minnow has dual hooks attached to a revolving tail. The lure was made in silver, copper, brass and bronze — and the museum has the only bass size made in silver. The lures are among some of the most valuable to collectors: The only Haskell found with the original box was a 10-inch copper musky size sold in 2003 for $101,200 at auction.

The museum is also home to the Comstock Flying Hellgrammite — the first known wooden lure — made by Harry Comstock in 1883. A unique group of oddities among the collection are known as the “the nut lures.”

“We have the only existing set of bass lures made from nut shells,” Bill says. “The Dr. Haas collection, numbering 23 lures, was made during World War II when metal was scarce, so the ophthalmologist melted down old eye glasses for lips on each lure.”

These are only a few of the many fascinating pieces of angling history and the stories behind them that Bill has to share. This educational collection outlines the history of fishing from stone and whale-bone hooks to more modern versions many of us have used during the last century.

“People that come here think they are going to see a hundred items like in a garage,” Bill said. “They are shocked to see 40,000 fishing items displayed in shelved cases. They will even find lures made by the singing fisherman, Johnny Horton. He had a couple of business partners: Elvis and Johnny Cash.”

The History of Fishing Museum is located at 225 N. Wildwood Drive in Branson. Operating hours are 10 a.m. to 6 p.m. Monday through Saturday, and noon to 6  p.m. Sunday. Tickets are $7.75 for children, $15.75 for seniors and veterans and $17.75 for adults. Mention this article for a special $3 discount on admission. Go to www.historyoffishingmuseum.org or call 417-239-3474 for more information.